Peruvian food is actually a lot better than you imagine it to be!  In this article I share my favourite Peruvian dishes and my favourite restaurants in Peru at which to eat them.

When I arrived in Peru over 3 months ago, there were a myriad of aspects of the country that I was looking forward to.  The food was not one of them.  I was aware that Peru cultivated enormous quantities of potato (read: starch) and corn, and that everything was served “con pan.” I’d also heard worrying rumours that the country did not really understand or accommodate vegetarians (or non-meat eaters in my case) incredibly well.  So I was preparing myself for some very uninspiring Peruvian food – a diet of bread, potatoes and corn, with the odd piece of fresh fruit thrown in, that I’d managed to source from the local market.

So, when I had the opportunity to take a local market tour and cooking class in Lima, I signed up out of curiosity more than anything else.  However, when I arrived at the market I was pleasantly surprised to see vegetables other than corn and potatoes, and also a huge amount of seafood. Learning about the ingredients that make up Peru’s national dish, Ceviche, and then having the opportunity to taste it, had me sold instantly.  I loved the fresh fish, refreshing flavours, and the abundance of chilli and coriander.  Hey, if I only ate one dish in Peru, I’d have been happy eating that one.

However, as I travelled outside of Lima – to the country’s northern coastline, central highlands, and tropical rainforests – I discovered that there is a lot more to the country’s cuisine than simply ceviche.  Peru’s cuisine is as diverse, exciting, and beautiful as its landscapes – so much so that I couldn’t resist dedicating a whole post to the country’s culinary delights.  Peruvian food really surprised me – in such a good way!

Obviously, being a non-meat eater, I cannot comment on how the cuisine fares for all you carnivores out there (however Stu tells me that Alpaca is incredibly tasty; he ordered it at every available opportunity!), which is why this post is entitled “A Pescetarian’s Guide to the Best Peruvian Food”.  But don’t worry if you don’t eat fish either, there are plenty of vegetarian dishes to be enjoyed here too – read on!

So, here they are, in all their unadulterated glory (including photographs to set your taste buds a tingling) – the best (in my opinion of course) Peruvian food and where to eat it:

The Best Peruvian Food to Eat in Peru

Situated just off the Plaza de Armas, this informal cafe/restaurant was a real find amongst many of Cajamarca’s mediocre offerings.  The service is quick and friendly and there’s a lovely relaxed ambience.  I ordered quinoa salad because I was eager to try this new superfood that’s being cultivated throughout South America.  It arrived beautifully presented and equally delicious.  I was sold after the first mouthful.  I’ve tried quinoa salads elsewhere throughout Peru but none of them even come close to being as tasty as Don Paco’s.

Before arriving in Cajamarca I’d read an article about the town, which – aside from persuading me to visit – mentioned that I must not leave without trying the above dish.  Having perused countless restaurant menus distantly lacking in any kind of Sudado (tomato based fish stew), we finally found Sudado de Trucha on the menu of the restaurant we’d eaten at the day beforehand.  Considering how much I’d enjoyed my amazing Quinoa Salad, I had no qualms about eating here again.

Once again, the meal arrived beautifully presented, the fish was cooked perfectly and the sauce was to die for.  I’m a big fan of coriander, and regularly throw a whole plant into the Saag Aloo I cook at home, so I was overjoyed to find a chef who also thinks this is a good idea.  I was indeed in coriander heaven.

Quinota con Trucha, Via Via, Ayacucho

Quinoa. Trout. Noticing a theme here?  Ok, I admit they were probably two of my favourite ingredients in Peruvian cuisine, and this dish at Via Via combines them both.  Via Via was one of the first establishments we ate at when we arrived in Ayacucho (primarily because it was one of the first ones open; we arrived at 6am – it opened at 7am), and I don’t actually think we made it elsewhere throughout our stay.  I loved this dish so much I ordered it on 3 occasions!

Proof that you don’t have to go to a restaurant to eat some of the tastiest, freshest food around, and you don’t have to spend a lot of money either.  What’s more, I loved the experience of sitting there on my little plastic stool surrounded by locals doing much the same, whilst I watched the dish being prepared in front of me.

For those of you who don’t know what Ceviche is, it’s a dish containing raw fish cured in citrus juices, and it’s served with onions, garlic, corn, sweet potato, coriander and chillies.  The difference with this dish is that the white fish (usually sea bass, grouper, sole or flounder) is replaced with black scallops.

I’ll be honest, Chiclayo doesn’t have a lot going for it.  It’s an unattractive, characterless modern city, and the only reason travellers really stop here is to visit the Museum of the Royal Tombs of Sipán, approximately 11 kilometres away.  However I have now found another reason: probably the best Parihuela you will eat in Peru.

Parihuela is essentially a seafood soup, but it’s hearty, fragrant, spicy, and loaded with fish.  I reckon I had an entire crab in mine (look at the photo!)

I have a feeling this dish had been adapted a little for Gringos, but it’s a wonderful mix of ingredients I love – beans, cheese, spicy tomato sauce, and scrambled eggs loaded with cilantro (coriander).

What’s more, the café is a lovely place to people watch (as it’s between the Plaza de Armas and the small bridge that leads to the site of the Inca ruins; there are also views of these from the café) and all profits go to children’s projects in the Sacred Valley.

Ok, so I’m cheating a little here with “salads”, but considering that most countries in South America have no concept of why foreigners would want to eat ‘rabbit food’, both of these establishments make pretty darn tasty rabbit food!

Using ingredients widely cultivated throughout the country (such as quinoa, potatoes, avocado, broad beans, corn, coriander, and mint) along with lentils, olives, chick peas, and beetroot, these two cafés most definitely serve the tastiest – and most inventive – salads I’ve eaten throughout Peru.

So there you have it – a comprehensive list of some delicious Peruvian food for all you non-meat eaters out there.

Also worthy of a mention (although not listed here due to the cuisine they serve not being typically Peruvian; there is a LOT of fusion food out here), are the cities of Cusco and Arequipa, the town of Pisac, and the beach resort of Máncora (although I did mention Máncora for its Ceviche de Conchas Negras).

In Cusco check out Greens Organic (you get 10% off your bill if you stay at Mama Simona). In Arequipa, check out Zig Zag, in Pisac, check out Mullu (the best Pad Thai I’ve tasted outside Thailand!) and in Máncora, make sure you eat at Tao (which serves Thai food),  La Sirena d’Juan (Peruvian fusion – specialises in fish), and Ganaha (sushi/Peruvian fusion). 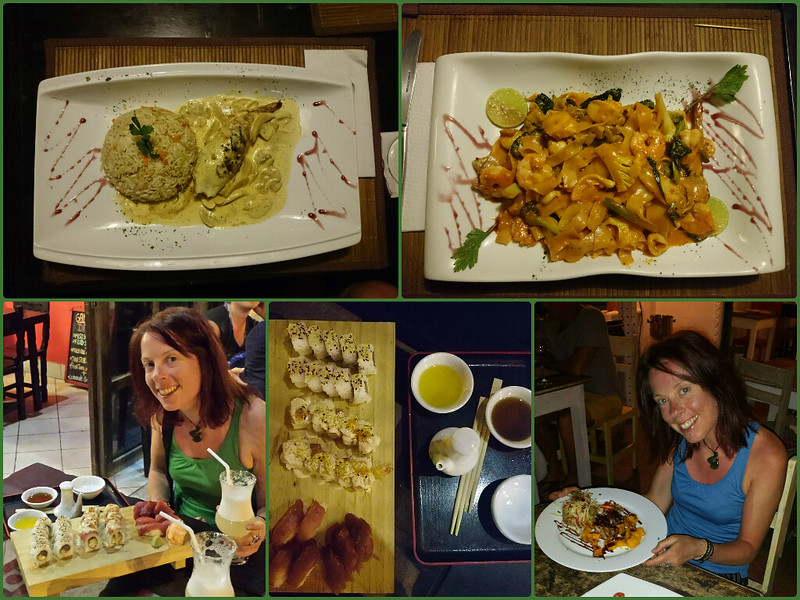 If you fancy attempting to cook a few of these dishes yourself, you can either book yourself on a cookery class in Peru or you can purchase one of the following books and have a go yourself at home.

Are there any other dishes or cafés/restaurants you would add to the list?  Share your thoughts in the comments box below!

Getting Higher in Ayacucho

Getting Lost in the Streets of San Blas, Cusco

The Long and Challenging Road to Tarma

The Road to Cajamarca: Peru’s Most Spectacular and Frightening Bus Ride