It was only after having read an article online – singing the praises of this charming Andean town, and of its signature dish, ‘Sudado de Trucha’ – that I decided to incorporate Cajamarca into our 3-month Peruvian itinerary. 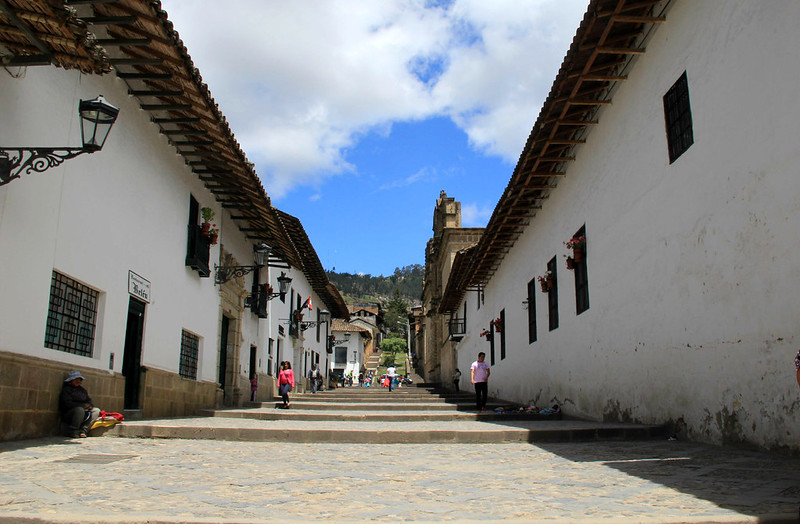 Cajamarca is situated in the northern highlands of Peru, 2720 metres above sea level, in a fertile valley surrounded by tall mountains.  It’s most historically notable as the place where the Incan Empire came to an end, yet despite having an attractive historical centre lined with cobbled streets, majestic  churches, and graceful colonial architecture, Cajamarca sees relatively few tourists.  As you stroll through Cajamarca’s streets, you’ll see campesinos (countryside dwellers) bundled in brightly-coloured scarfs and wearing tall wide-brimmed hats, more than you will other travellers. 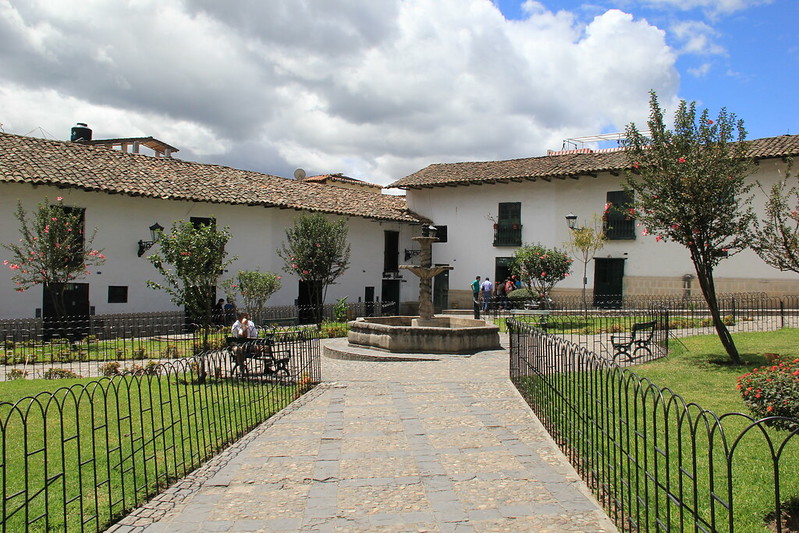 The tourist infrastructure therefore remains (for now) in its early stages. There are very few good cafes or restaurants, wifi is primarily only available in hostels and hotels, and little English is spoken.

That said, one of the best restaurants in the whole of Peru is located here, and one of the loveliest hostels (which actually had excellent working wifi in the communal courtyard and attached coffee shop), and we even managed to find and purchase a small knife (an essential for peeling fruit and avocados) and a washer for our Go-Pro selfie stick using bad Spanish, terrible drawings and exaggerated hand gestures.

There is a lovely laid-back vibe running through this town, and with enough local sites to occupy you for at least a few days, it’s a fantastic place to come to escape the Gringo Trail for a while.

Here’s what we loved about this northern Peruvian gem…

The appeal of churches for me is not the religious aspect, but the fact that architecturally they are works of art, demonstrating spectacular design and craftsmanship. 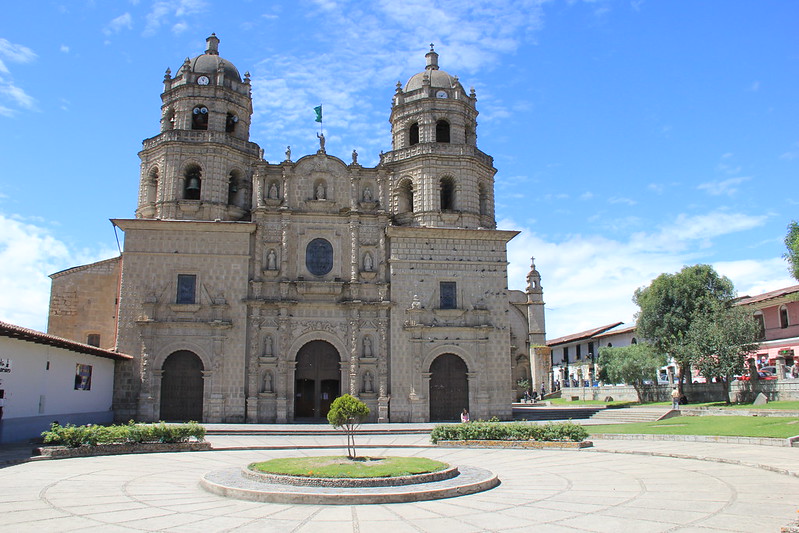 The Iglesia de San Francisco is a wonderful example of this, its exterior is incredibly intricate in its design, and also wonderfully preserved.   Historically the church dates back to 1699 (although its belfries were only fully completed as recently as 1958). 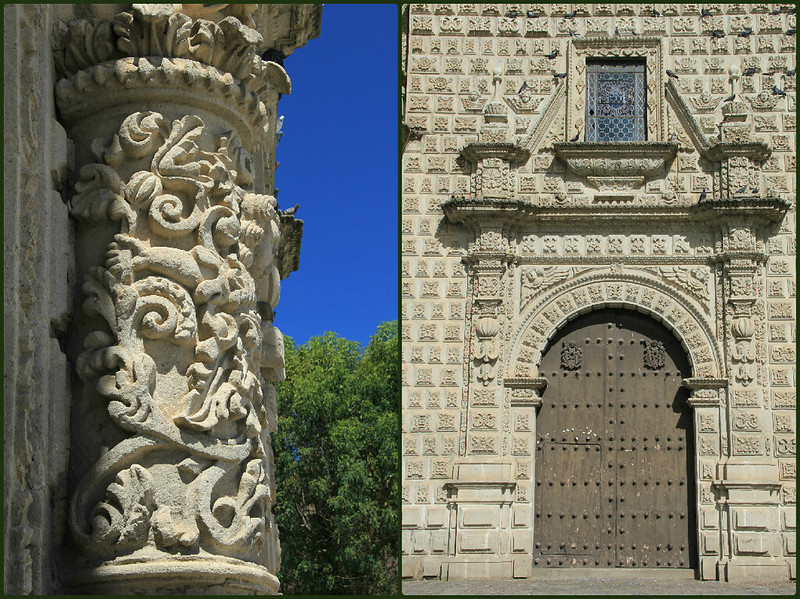 Located on the opposite side of the Plaza de Armas to the Iglesia de San Francisco, Cajamarca’s Cathedral is another stunning piece of architecture.  Originally designated to be a Spanish Parish church, the cathedral was constructed between 1682 and 1762, on the site of the old Casa de Justicia.

It’s an incredible example of Baroque architecture, and although I was unable to get any close-up shots (due to the gates being locked on every occasion we visited during our stay), the facade is a wonderful combination of finely-carved columns, cornices, and niches.

I did however manage to capture a local campesino walking through the shot, her green dress perfectly coordinated with the cathedral doors. 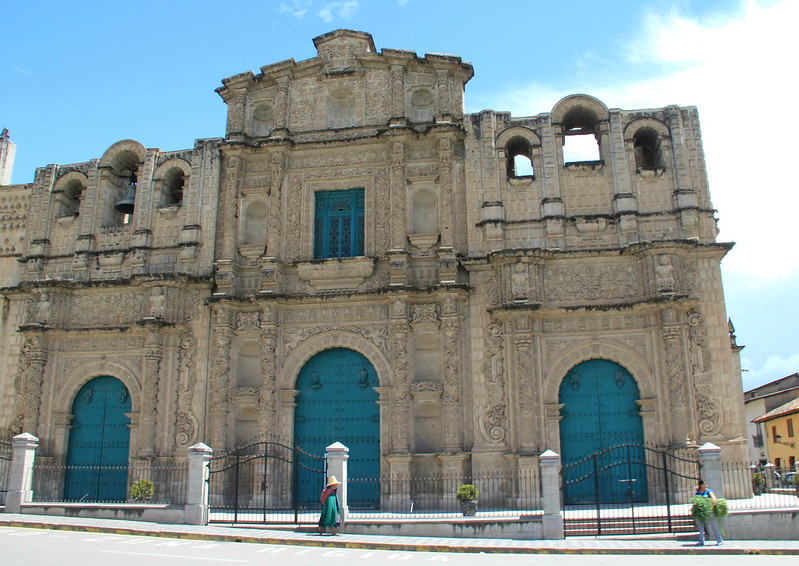 A simple white cross marks the summit of this mirador, which offers some spectacular panoramic views of the town.  There are actually walking paths that spiral around the whole hilltop, making the journey almost as pleasant as the final destination.  To reach Cerro Santa Apolonia, head down Calle 2 de Mayo and climb the set of stone steps at the end of the street.

It was lovely to wake up every morning and come home every evening to this beautiful tranquil oasis.  Los Jasmines offers rooms around a lush courtyard garden, with a further garden at the rear of the property.  There’s a large outdoor seating area, spacious, comfortable rooms , and hot showers.  What’s more, there’s an attached cafe that serves real coffee and reasonably priced breakfasts. 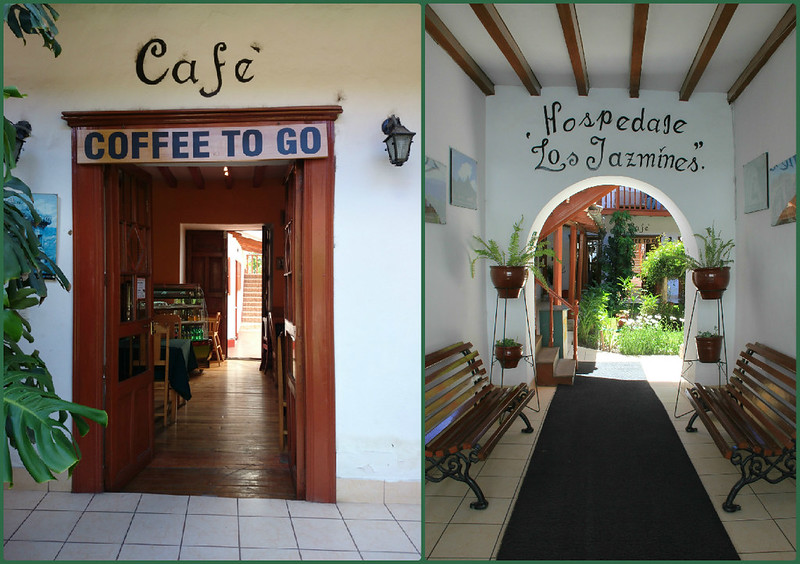 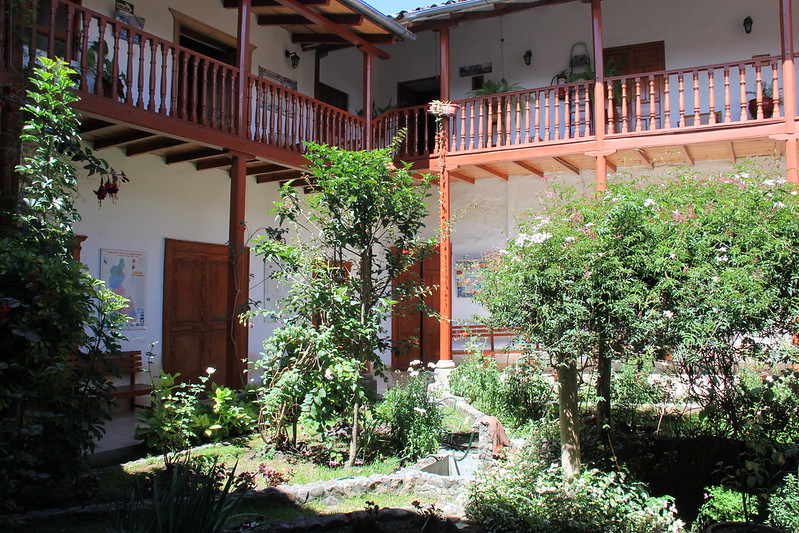 If you’ve read my previous article The Pescetarian’s Guide to the Best Dishes of Peru, you’ll know that the Sudado de Trucha I ate at Don Paco’s was one of my food highlights of the whole of Peru.  Ok, so Cajamarca does not have many good quality restaurants, but Don Paco’s alone makes up for this fact.

Sudado is a tomato-based fish stew and the main speciality dish of this region, and the one I was served here in Cajamarca was the first and definitely the best of all those Sudados I have eaten since.  The fish was cooked perfectly, and the tomato sauce was thick, fragrant, and loaded with coriander.

This sprawling colonial complex (containing a church and hospital) was constructed entirely of volcanic rock somewhere between 1627 and 1774.  The hospital was run by nuns, and 31 tiny, cell-like bedrooms (hell, even the beds barely looked big enough to accommodate a child) line the walls. 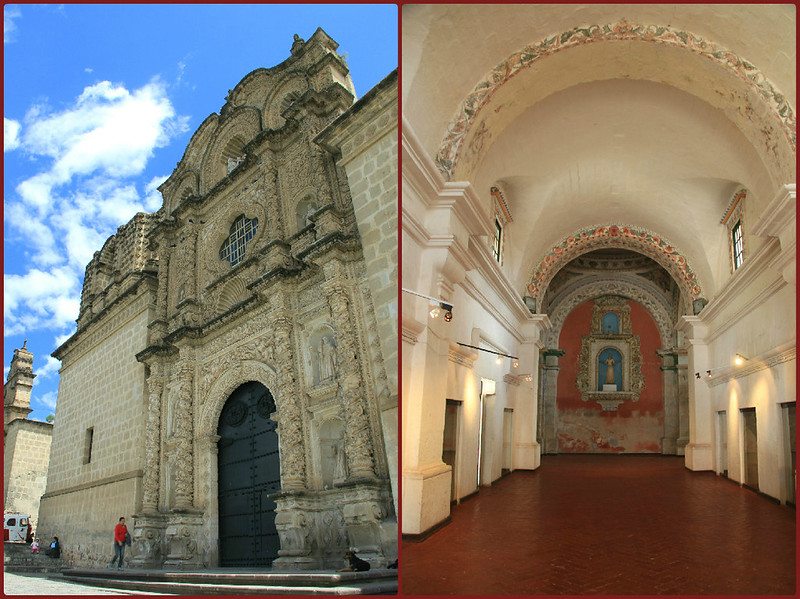 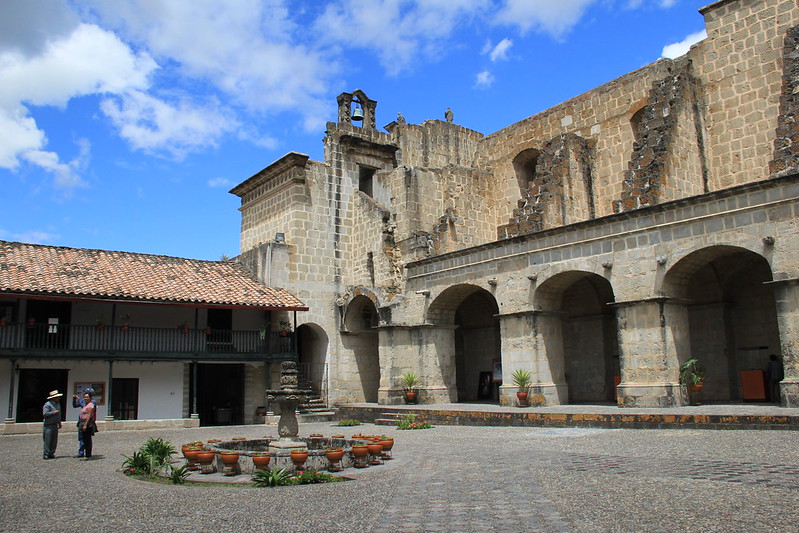 Part of the Complejo de Belén and separated only by a street, this museum houses collections of agricultural and musical instruments, and traditional dresses and handicrafts.  It also contains an art gallery featuring works by local artists. 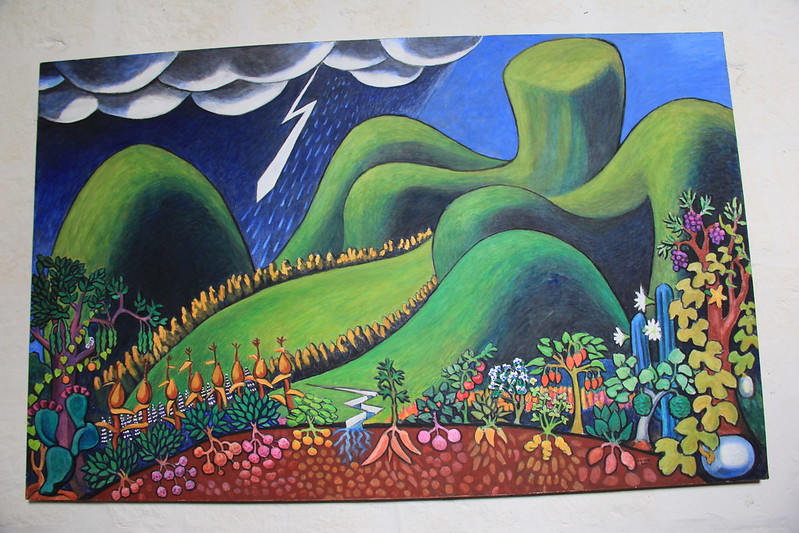 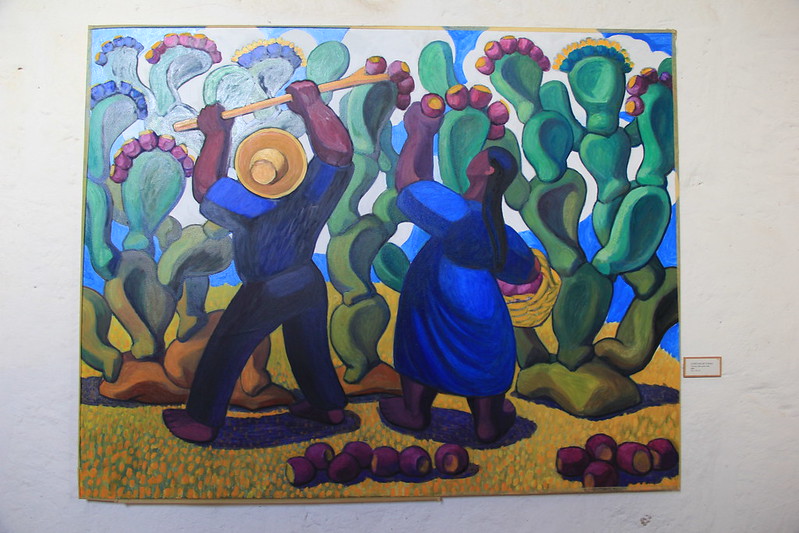 As well as being recognised for its Sudado de Trucha, the Cajamarca region is also famous for its cheese.  Cheese shops are aplenty around the town, with a variety of different types to choose from.  We bought a soft cheese and a hard(er) cheese, and then struggled to find anywhere that actually sold some bread to accompany them! 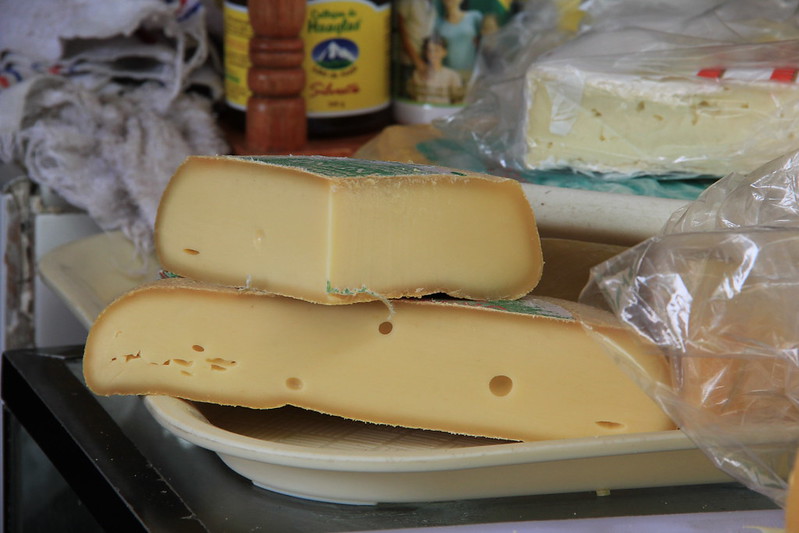 You’ll usually see these (or a variation of them) in most towns and cities in Peru, but Cajamarca’s tuk-tuks are slightly different.  They are all built to exactly the same design and painted in exactly the same colours.  Like London’s red buses and Delhi’s yellow and black Ambassador cabs, Cajamarca’s red and white and blue and white tuk-tuks are an an instantly recognisable symbol of the city’s local transportation.  Almost every ‘street photo’ I shot here had a tuk-tuk in it – whether I’d planned it or not.

According to a few of the articles I’ve read and also the helpful gentleman (Patrick) who owns the pleasant cafe/art gallery ‘Van Gogh’, Usha is also one of Cajamarca’s highlights.  It’s a small, intimate, dimly-lit bar run by local musician Jaime Valera.  For 21 years he’s been entertaining travellers and nationals alike with his nightly musical tour of Latin America, accompanied by a few of his musician friends.

It sounded right up our street and we definitely wanted to meet this guy, to share a Pisco with him, and hear some of the music that he’s famous for, but unfortunately I cannot vouch for all the positive things I heard about Usha, because on the one night we decided to go (our last night in Cajamarca), the bar never opened.  The locals with whom we queried this did state that this was unusual though, so if you fancy checking it out, you can find it on Amalia Puga (the same street as Van Gogh), number 142.

We also didn’t make it out to Baños del Inca, the hot springs which are located 6 kilometres to the east of Cajamarca.  At the time we’d not long visited Moyobamba’s Baños Termales, and were under the impression that it is possible to over-do hot spring visits.  We have since discovered that it is not, and Cajamarca’s offering is apparently a very worthwhile trip.

So, if you’re heading towards the coast from the northern highlands in Peru (or vice versa), and you fancy getting off the Gringo Trail for a while, be sure to add Cajamarca into your itinerary.  I promise you won’t regret it 😉

Have you stumbled upon somewhere on your travels that has somehow escaped the tourist trail?  Tell me about it in the comments box below 🙂

The Cobblestone Streets of Ollantaytambo | Gallop Around The Globe