Huaraz is reportedly one of the best regions in Peru to get your hike on: a warm, dry climate from May through to September, and some of the most stunning mountain scenery you’ll ever set eyes on.  If you’d like to find out more about hiking in Huaraz, read on!

Seeing as though we’d not really done any proper exercise since our hike to Catarata de Gocta near Chachapoyas, the idea of spending a few days hiking in Huaraz appealed to us.

We’d travelled to Huaraz on another night bus, and as we neared the city I opened my bleary eyes to the sight of rain.  Lots of it.  As we jumped into the taxi and headed towards Santiago’s House (our home for the next few nights), the taxi driver proceeded to tell us that that the rain (which is normally a bit of an anomaly at this time of year) was a direct result of an El Niño weather front, and was probably here to stay for the foreseeable future.

Great.  What else were we going to do in Huaraz, other than hiking?

We felt a little guilty ringing the bell at Santiago’s house at 6am, but the other option (accounting for the fact that there would be nowhere open to grab a coffee) was to wander around the city with our backpacks in the pouring rain, which wasn’t really an option.

The third time we rang the bell, a rather dishevelled gentleman appeared (we’d clearly got him out of bed), showed us to our room, and told us to come down to reception at 8:30am to check-in.  So we lay on the bed and had an involuntary nap for a couple of hours before heading out in search of somewhere to enjoy real coffee and good wifi, whilst we formulated a plan of action and sheltered from the rain for while.

“the restless capital of [an] Andean adventure kingdom”

Indeed the city is full of shops selling outdoor gear, travel agencies advertising trekking expeditions (ranging from 1 to 10 days), mountaineering, rock climbing, ice climbing, mountain biking, and river-running, and cafes were you can peruse books about the geography and geology of the area, as well as about various climbers and explorers who’ve scaled the peaks of the Cordilleras.

As we savoured an enjoyable (if rather expensive) brunch at California Café, we decided that we’d visit one of the travel agencies to enquire about the forthcoming weather forecast and available treks.  We figured that if the weather forecast was really as bad as the taxi driver had predicted it to be, then there wouldn’t be any treks running.  Trekking in light rain is one thing, or in the midst of a heavy but brief storm, but I couldn’t imagine trekking in the kind of conditions we suffered at Catarata de Gocta all day – or in fact all day for 3 or 4 days in a row.

We decided upon Huascarán.  Of the 6 agencies that Lonely Planet recommended, they sounded like they were more geared towards tours and short hikes as well as more technical hikes and climbs.

It was still raining when we walked into their office.  The gentleman was very helpful, thorough in his description of the trek itinerary, and optimistic about the weather (stating the heavy rains tend to arrive mid-afternoon so the majority of the day’s trekking can be completed before then), but they only had a 4-night/5-day trek to Santa Cruz, which was leaving the day after tomorrow – for a total cost of 800 soles (£166).

Firstly, that was a heck of a lot of money.  Secondly we really didn’t want to go for that long, preferring 2 nights/3 days or 3 nights/4 days at the very maximum.  Thirdly, was he really right about the weather?  Because it had rained all day here in Huaraz.  Yes the rain had indeed been heavier in the afternoon, but it had still rained all day.

It sounded too good to be true – a full-day trek completely free of charge!  We had absolutely no reason to say no.

The trek left too early in the morning for us to enjoy breakfast at the hostel, so we missioned it down to a little cafe that was advertising a 4 soles (83p) breakfast of tortilla de verduras and a black coffee, before power walking back up the hill to make it in time for our 8:30am pick-up.

We weren’t driven very far out of Huaraz before the bus stopped, and our guide lead us over a large bridge to the start of the hiking trail.  Our group consisted of two Dutch girls, a guy from Columbia, and a dog (who we realised was following us as soon as we exited the bridge and began to make the climb uphill.) 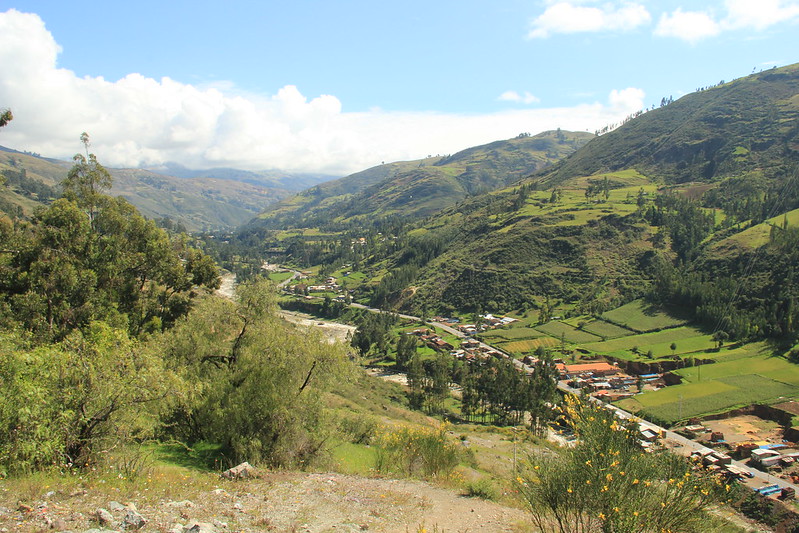 Oddly enough, as the guy at Huascarán had predicted, there were blue skies ahead, and as we started to walk, the sun came out.

The scenery was mountainous but also agricultural.  We passed plentiful cactii and cornfields, cows grazing in the fields, and local people in traditional dress working the land or carrying buckets to fill with water at the nearby stream. 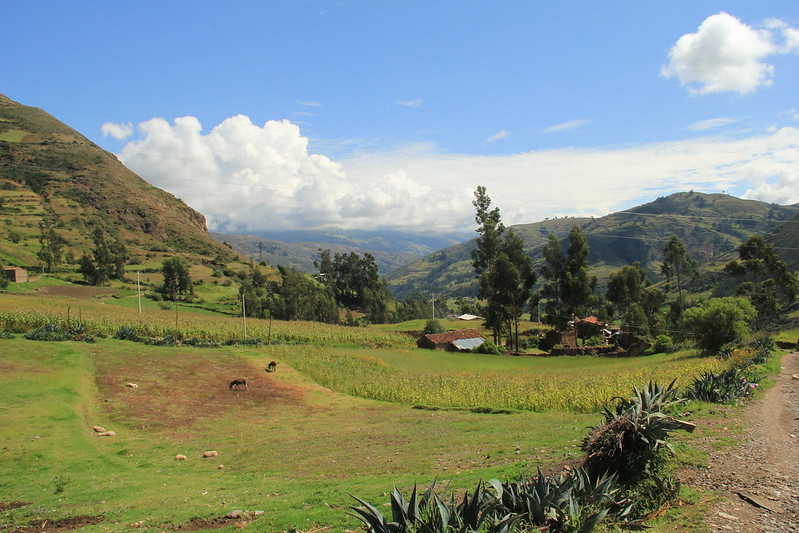 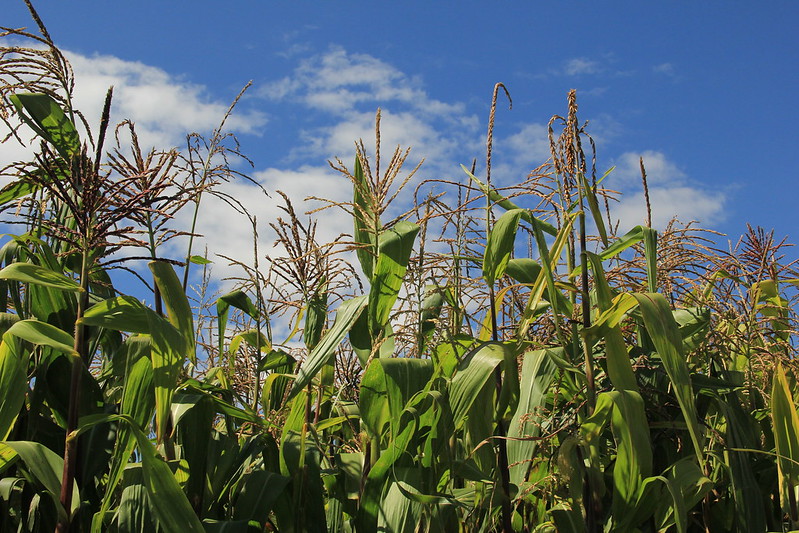 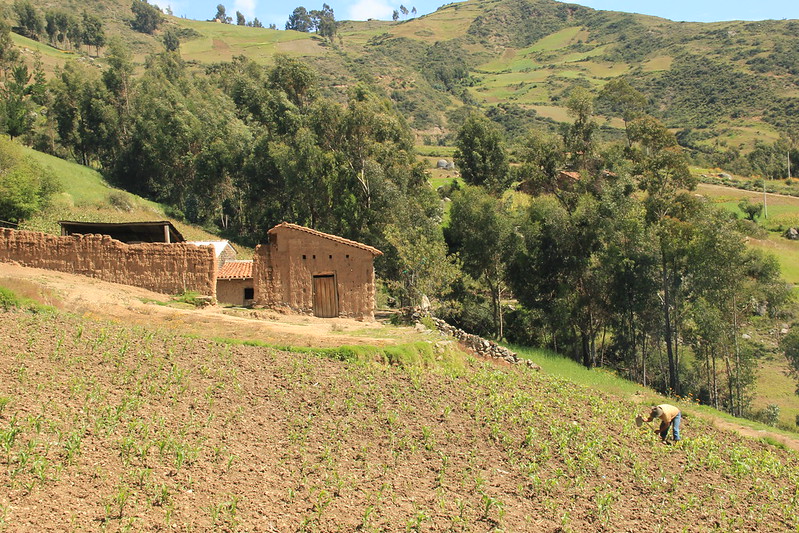 It wasn’t a difficult hike, but it was all uphill, with no breaks at all on the flat.  The two girls on the trek seemed to be taking it slower than we normally would, so that bode well as regards to our own capability of completing the Santa Cruz trek.  If they could do it then we definitely could.

Around half the way up the 700 metre climb, one of the Dutch girls really started flagging.  She was battling with a worsening headache, and her legs felt heavy and starved of oxygen.  She sensibly (albeit reluctantly) decided not to continue with the climb.  She found a comfortable rock beneath the shade of a cluster of trees and rested, and once the guide felt sure that she was not in any immediate danger, he  accompanied the remaining 3 of us to the lake at the summit of the climb – 3800 metres above sea level. 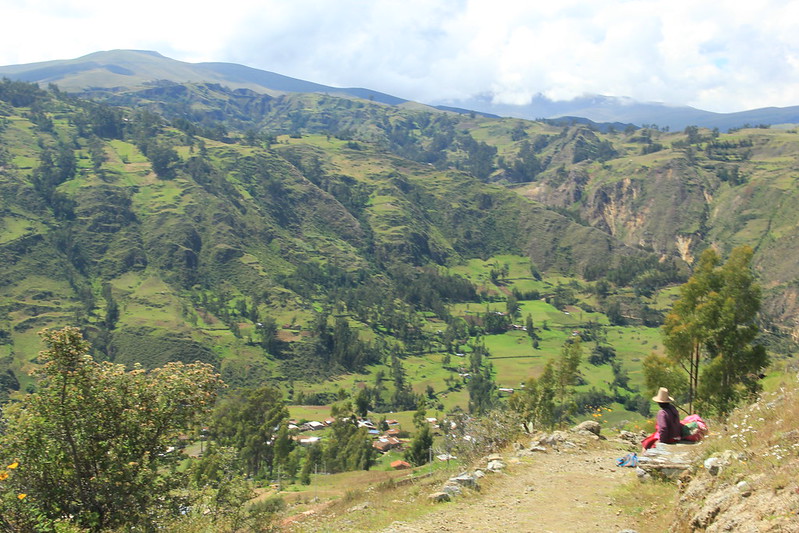 At the time I wasn’t entirely convinced that was a wise decision – leaving the afflicted and continuing on with the healthy members of the crew.  However on reflection, he must deal with varying levels of altitude sickness on a daily basis, and be competent at assessing the seriousness of such symptoms.  I’m sure that if he or the Dutch girl deemed the situation grave enough then we all would have prematurely finished the trek and headed back towards Huaraz in search of proper medical attention.

It did mean that we had to walk down from the lake the same way we hiked up, in order to collect our poorly trekking companion (the original plan was to take an alternative route back), however that was a small price to pay.

Towards the top of the climb I was beginning to get a little out of breath, and my leaps and bounds weren’t quite as spritely as they’d been at the start, but nonetheless I arrived at the lake feeling pretty darn good.  The only real difference I noticed was that it was much colder at 3800 metres than it had been at just under 3100 metres.  So I donned an extra layer, and sat down to admire the view. 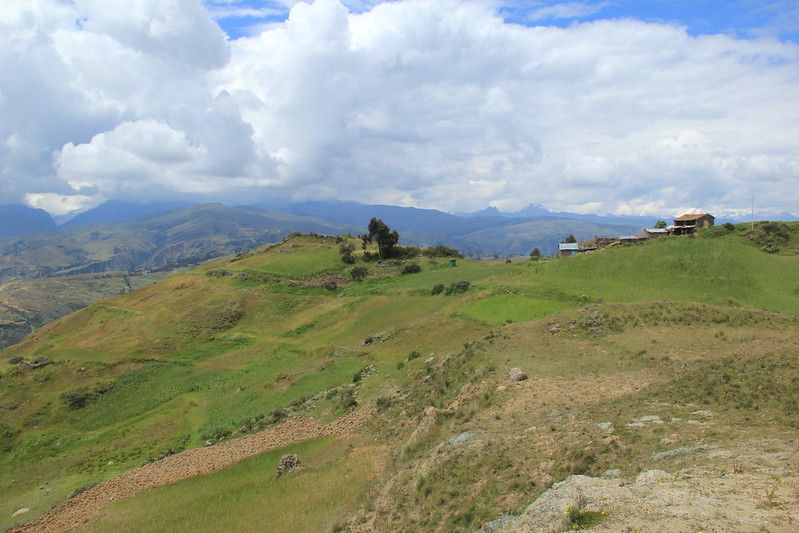 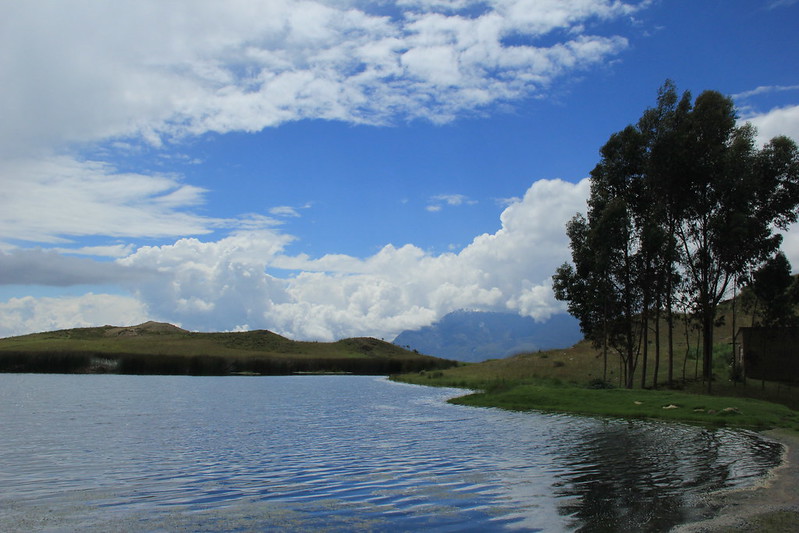 In spite of covering old ground on the return journey, it’s surprising just how many new aspects of the landscape you notice.  On the hike up, we were concentrating mainly on reaching the top; on looking at the path in front of us.  We rarely took the time to look behind us, and had we not come back down the same path, we would have missed views like this. 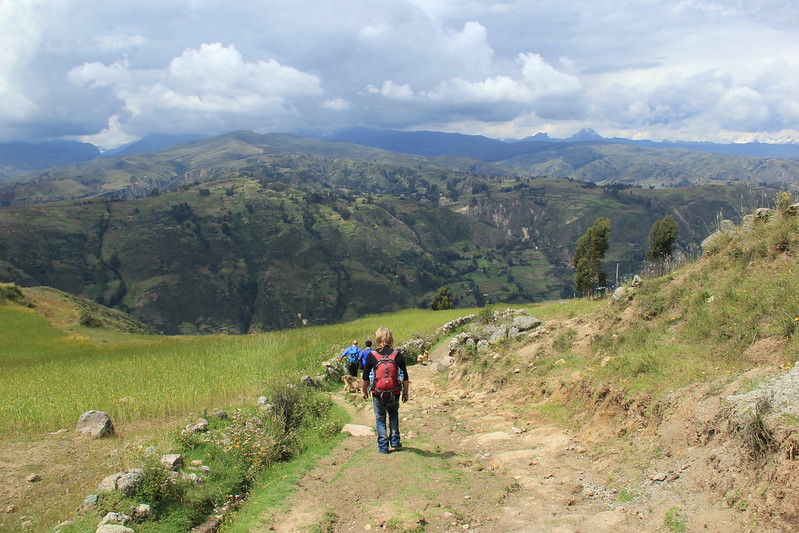 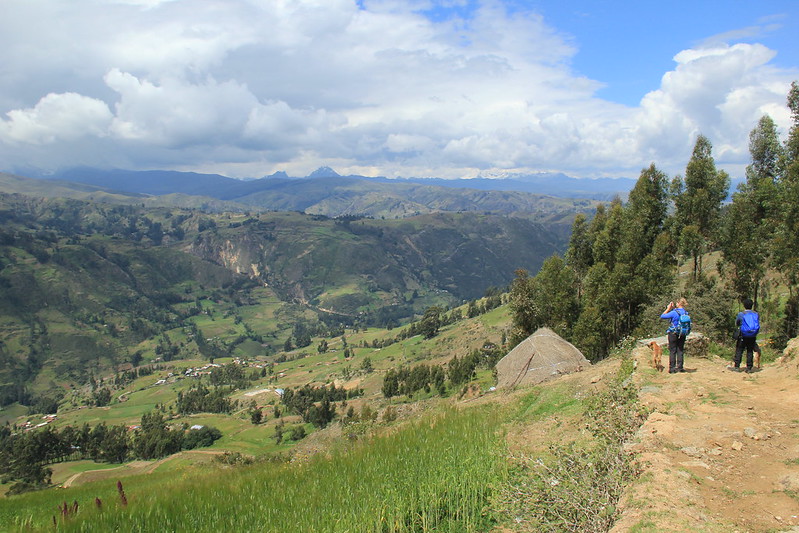 We also spotted two of the cutest pigs ever, looking down upon us as we neared the bridge at the end of the trek. 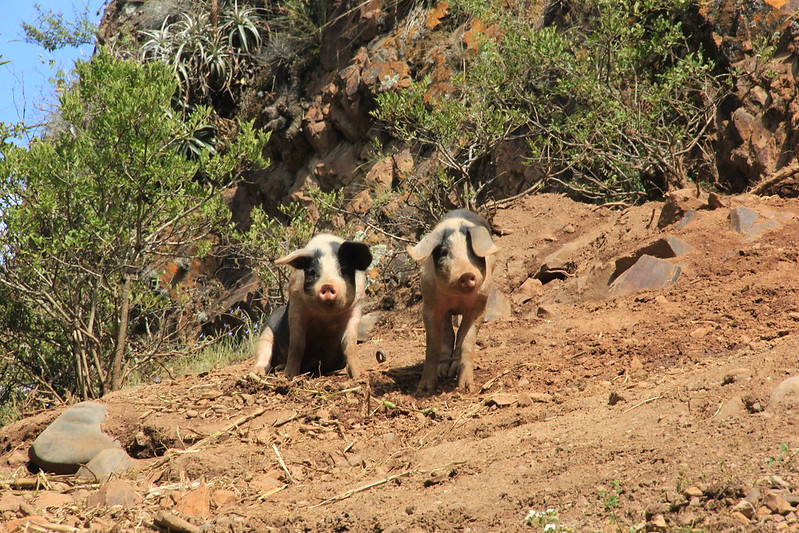 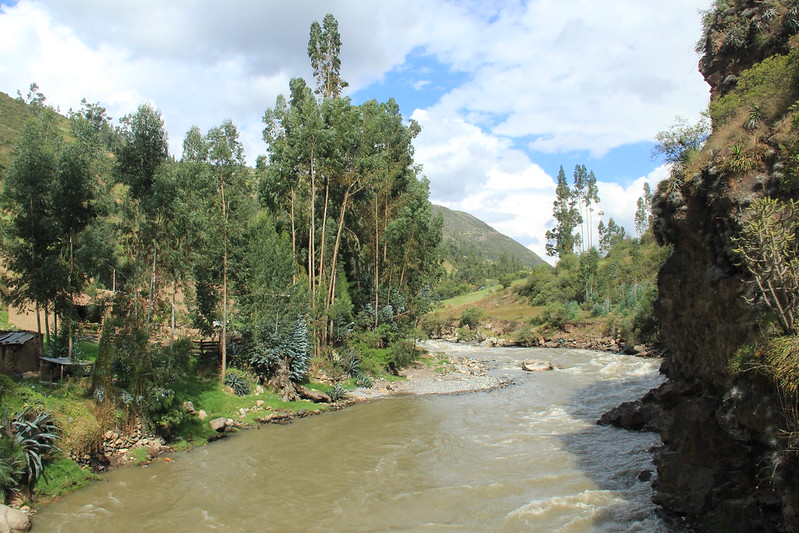 Much as we’d enjoyed today’s hike and were confident we were capable of completing the Santa Cruz trek, neither of us wanted (or could really afford) the full 5-day option that Huascarán were offering. I probably would have been impulsive and signed up for it regardless had Stu been more keen, but – as we would both shortly discover – it was rather fortunate that he wasn’t.

Trekking at levels higher than 4000 metres above sea level is a very different experience to lower altitude treks.  Little did we know just how different it would turn out to be….

Pros: The price, hot showers, incredible view from the roof terrace, relaxed vibe, fast wifi (in the areas where it works)

Cons: Lack of common areas, wifi only works in a very small area of the hostel near the computer.

Price: 30 soles per night (£6.28) for a matrimonial room with private bathroom.

For a full review and details of where to book, please click here

Have you been to Huaraz before?  Or hiked at altitude?  How did you find it?

Reflections and Frustrations: Crossing the Border from Peru to Bolivia

Laguna 69: My Harsh Introduction to Trekking at Altitude