Located right on the coast just 12 kilometres outside Trujillo, this once-tranquil fishing hamlet is now a popular destination on Peru’s ‘Gringo Trail.’  During the reign of the Chimú culture from 800 AD to 1400 AD, Huanchacho was used as a port for the people of Chan Chan, just 4 kilometres away.  After the Spanish conquest of 1534, it continued to function as a port for Trujillo right up until 1870, and even after the port was closed, Huanchaco was still used for exporting sugar from businesses in neighbouring Chicama Valley.

Nowadays Huanchacho is known for its Ceviche, its Surf, and its traditional reed fishing boats, and offers an alternative base to Trujillo for exploring the nearby Chan Chan ruins.

We’d already spent a couple of days in Trujillo in order to give ourselves sufficient time in which to fully appreciate the city’s abundance of lavish colonial architecture and colourful mansions.  We’d also already visited Chan Chan, as well as a few of the other nearby ruins.  So our decision to book a few nights at Naylamp Hostel in Huanchaco was purely for the purpose of enjoying a little more time on the coast before heading inland to the city of Huaraz and the spectacular Cordillera mountain range.

However we almost changed our mind about stopping here the day before we were due to do so.  Our tour of Chan Chan ended in Huanchaco, so we thought we’d have a quick look around before catching the combi back to our hostel in Trujillo for our final night in the city.  What we found was a distinctly average beach, and an unattractive town which was overrun with people.

Fortunately when we actually arrived on the Monday afternoon, we hardly recognised the town.  There was a quiet, relaxed vibe to the beachfront, and very few people were milling around.   Whilst we were not blessed with the continuous sunshine we experienced during our 7-days in Máncora (beach resorts just aren’t the same when it’s overcast), we did concede that Huanchaco was definitely worthy of a few days of our time.

Here’s what we loved about this little coastal village that still clings proudly to its traditional fishing roots:

This is the nickname given to the narrow reed boats that this village is most famous for.  So named because of the way in which they are ridden by the fishermen (Caballitos de Tortora means “little horses”), these boats were depicted on 2000-year old Moche pottery, and are still in use today.   They are constructed from the same reeds used be the Uros in the Lake Titicaca region, and last just a few months before becoming waterlogged and needing to be replaced. 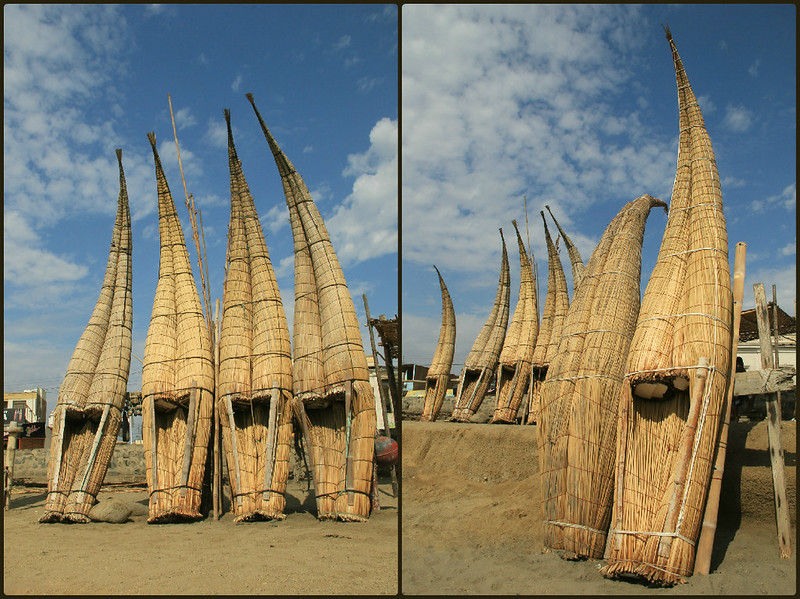 Whatever the time of day, you’ll see rows of these iconic craft lined up along the beach, drying out in preparation for their next outing on the water.  However if you wake up early enough (and I mean early; these fishermen are already casting their bait before the sun rises), you can witness an age-old tradition in practice.

This Dutch-Peruvian beachside cafe is Huanchaco’s requisite traveller’s hub – and understandably so.   All the outside seating affords a wonderful sea view, and even if you’re seated inside, you can still hear the waves washing up on to the shore. 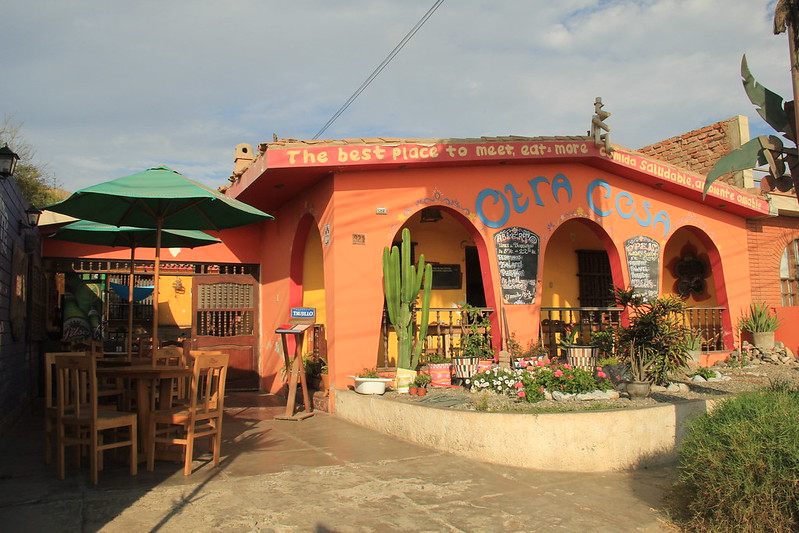 They specialise in healthy vegetarian fare (the falafel are delicious!) with daily economical set menus, and they also serve a variety of fruit smoothies, juices, and organic coffee.  We started planning our days around what we were going to eat here and when!

Otra Cosa also offers Spanish lessons, yoga classes, tourist information, on-site accommodation, and volunteering opportunities.  Half the tips are donated to charity, and local organisations are supported by a small clothing and jewellery shop inside the cafe.

During the day it’s a great place to come to watch the fishermen at work, and to have a nosey at their catch, which you’ll usually find in plastic buckets lined up along the pier’s edge. 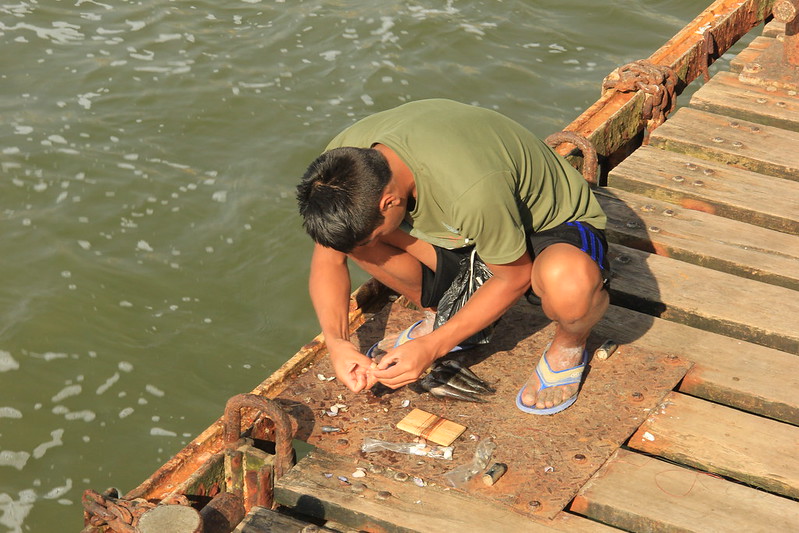 As the day draws in, head back on to the beach for an alternative view of the pier.  Watch the surfers waiting to catch the final waves before nightfall, and the shifting colours of the sky as the sun slowly sinks down into the sea.

There are plenty of outfits in Huanchaco offering surfing lessons, the longest-running and most reliable of which is Muchik.  They charge around 45 soles for a 2-hour lesson, and you can hire a board and a wetsuit there for 15 soles per day.

Alternatively you can do as Stu did and hang around on the beach until one of the (English-speaking) locals befriends you and subsequently asks if you fancy having a go on his board for free.  Ok, so it wasn’t totally free of charge but I don’t think 12 soles (the cost of 3 ice creams for him and his two mates) is a bad exchange for almost an hour in the water catching some waves.

Ok, so this wasn’t one of the best hostels we stayed in, but for the price and due to its beachfront location, I think it definitely deserves a mention.

Located at one end of Huanchaco’s beach, it’s far enough from the main concentration of cafes and restaurants in the town to be peaceful, but still only a 10 minute walk from the pier.  It’s also pretty much right next to Otra Cosa, which is handy because breakfast is not included in the price of the room. 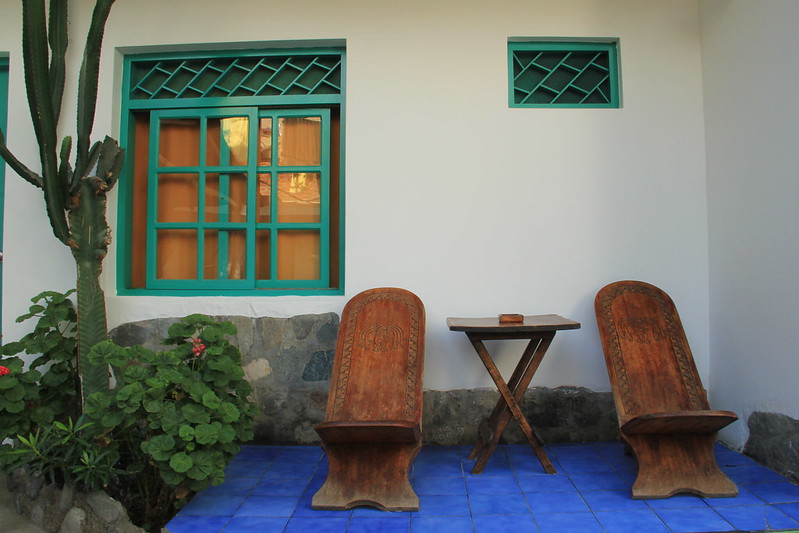 Although the private rooms were advertised at 60 soles here, when we asked if there was anything cheaper we were shown to the camping area and to a sole room on the edge of the campsite/gardens – which cost 40 soles (£8.36)

The showers were hot and powerful (some of the best we’ve experienced in Peru), the camping area has an attached kitchen and hammocks, and there is also an inner courtyard/chillout area (which looks like it used to be a pool), a terrace surrounded by aromatic jasmine, and an attached cafe.

The Church at the Top of the Hill

Said to be the second oldest church in Peru, the Santuario de la Virgen del Socorro (rather a long one to remember) was built between 1535 and 1540.  It’s a short climb for some incredibly good views back down on to Huanchaco and out to sea.  The steps leading up to the church have been attractively landscaped with a mixture of plants and flowers, including cactus, and it’s a peaceful place to gather your thoughts. 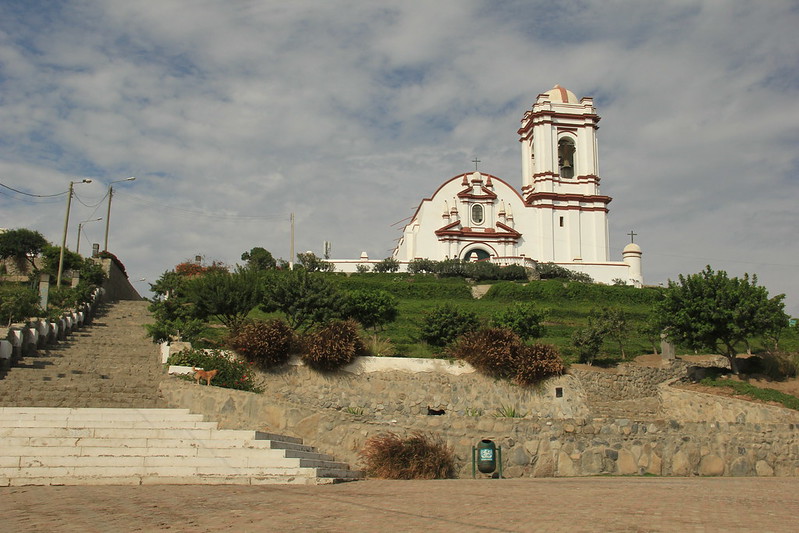 Huanchaco has history, and that’s what I liked about this little village.   It may now be a firmly established destination on today’s Gringo Trail, but it still continues to cling proudly to its traditional fishing roots.

Riding the Dunes in Huacachina

Chan Chan: The Largest Adobe City in the World