Yet here I am in the final month of 2015, and one of my most incredible and unforgettable experiences in Bolivia remains untold.  I’ve written about my recent return to the beautiful Spanish city of Granada, my road trip through Andalusia’s pueblos blancos, my city break in Cologne, my birthday trip to the incredible clifftop monasteries of Meteora, and my long weekend uncovering the crumbling charms of ancient Porto, but my adventures through the awe-inspiring landscapes of Bolivia’s Salt Flats are nothing more than a jumble of quickly scribbled notes and unedited photographs.

To be completely honest, the concept of writing about the Salar de Uyuni scared me.  How could I ever do justice to somewhere so amazing?  How could my words ever portray the real beauty and enormity of a part of the world so unlike anywhere I’ve ever visited?

There was also the fact that, in between my full-time day job, and writing assignments for the two other companies I currently work for, I was struggling to keep to my once a week posting schedule on my own website.  What I needed were a number of short (it’s all relative; I struggle to write posts under 1000 words) articles that I could write over two to three evenings, which would then eventually free up enough time for me to write a longer, more in-depth and engaging post about my 4-day tour through Bolivia’s Salt Flats.

But then the festive season happened and my social calendar started filling up, which in turn meant that the hours available for me to dedicate to writing went down.

You’d have thought that after two years of blogging and working full-time, I would have figured out an effective way of managing the two, but unfortunately I haven’t and it is a constant (albeit enjoyable!) struggle for me.

So, whilst at this stage I’m not sure how well this post is going to turn out, I’d rather have it written than unwritten, so here goes…. 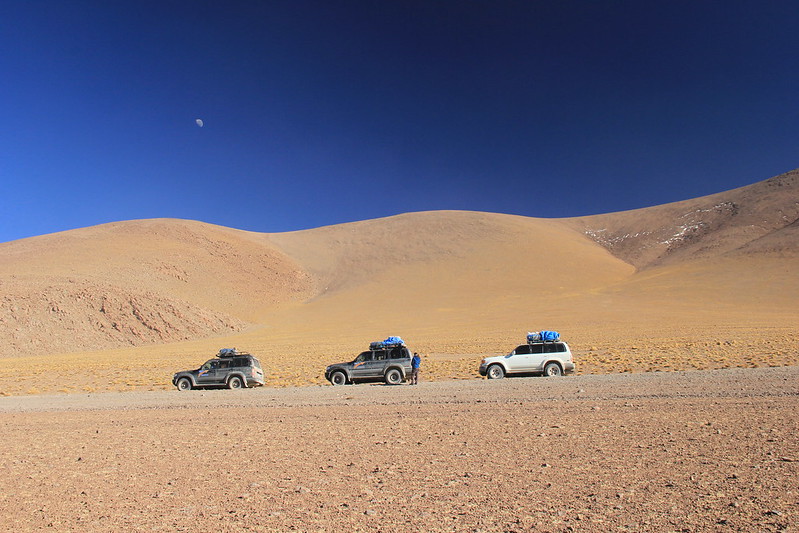 Unlike many travellers, we’d made the decision to start our Salt Flats tour in Tupiza rather than Uyuni.  It was a longer journey from Potosí but meant that our tour would culminate, rather than begin with, our arrival at the Salt Flats.

Tupiza is a strange little town.  Legend has it that Butch Cassidy and the Sundance Kid met their end at the hands of the Bolivian army near Tupiza, and travel agents advertise horseback tours to the exact location of their demise, yet when we enquired about the possibility of going on one (I liked the idea of playing cowboy for a day), this opportunity strangely became unavailable.

“There’s not much to see at the site”, we were told by Tupiza Tours.

The lady shook her head.  “It’s not so popular, we have not enough people wanting to go.”

And so the two days we had to kill in Tupiza, in order to wait for an English-speaking guide to accompany us on our Salt Flats tour, were spent searching for ATMs that would dispense enough money to cover the cost of our trip (tip: choose Spanish language rather than English and you’ll have access to a larger amount of cash), attempting to find a cafe that actually served “café” (coffee) and avoiding the local  madman, who drove around in his wheelchair with a pet monkey on his lap, shouting obscenities at passersby.  The restaurant owners even locked their doors when they spotted him nearby.

We did however manage to make the short hike up to Cerro Corazón de Jesús, to gaze across at the fiery red rocks of the surrounding countryside. 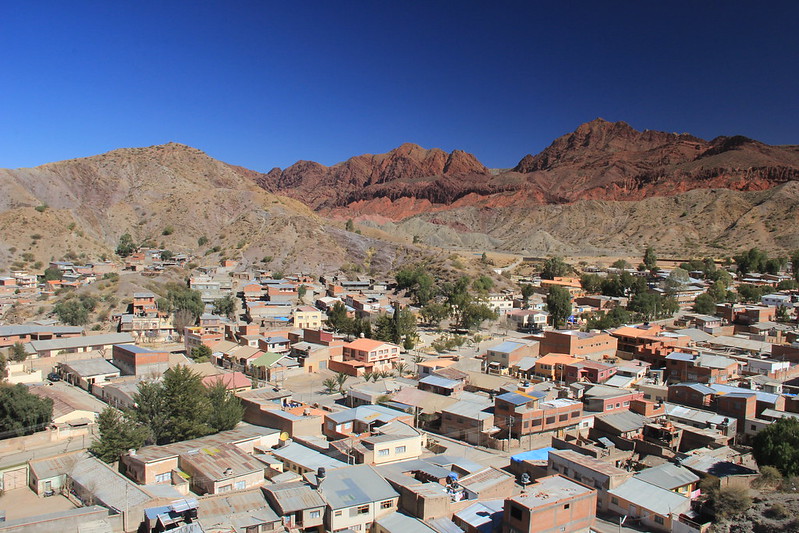 I’ll be honest, the tour didn’t get off to a great start.  We were kept waiting, moved from jeep to jeep, asked to load and unload our backpacks multiple times, and all without a word of communication from Tupiza Tours.  It turns out that a couple who were booked on to the trip, and who were supposed to be travelling in the jeep in front of the one we were eventually settled in, had not showed up.  This resulted in the two solo travellers in the other jeep having to pay an extra B200 (approximately £20) in order for the tour to actually go ahead.  Consequently we left an hour later than everyone else.

And then we had the slowest driver in the world. 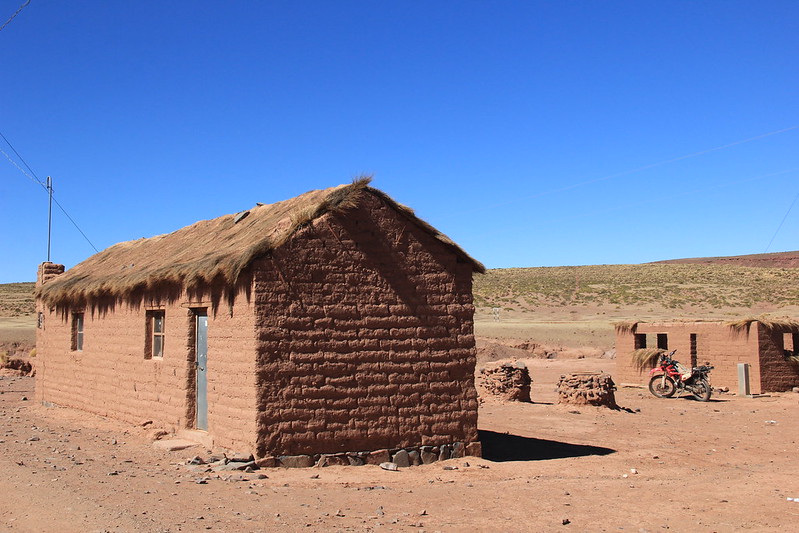 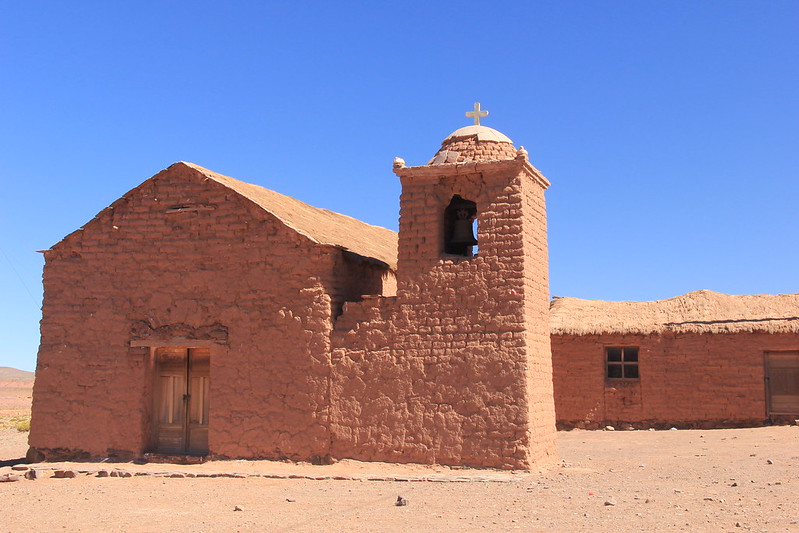 To add insult to injury, my dietary request for a non-meat option was completely ignored (or misunderstood, who knows!) at lunchtime, which meant that whilst everyone else was tucking into a nice warm beef goulash, I was expected to dine on a dish of cold rice and tinned tuna.

Fortunately, after that point we left the bad luck (and incompetent management) behind us, and I really started to enjoy the beauty of the spectacular landscapes we were driving through. 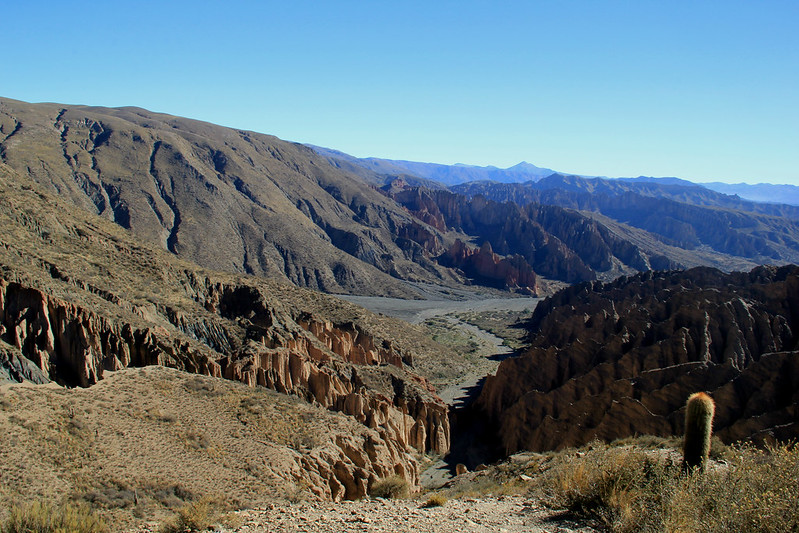 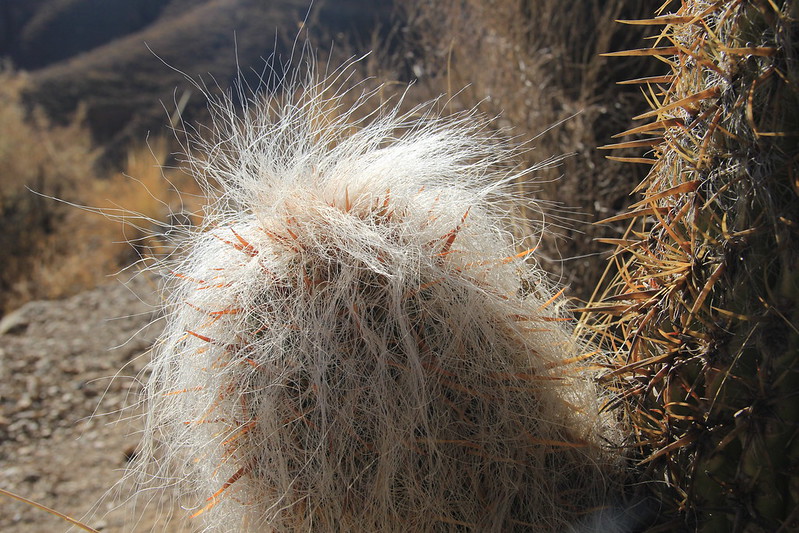 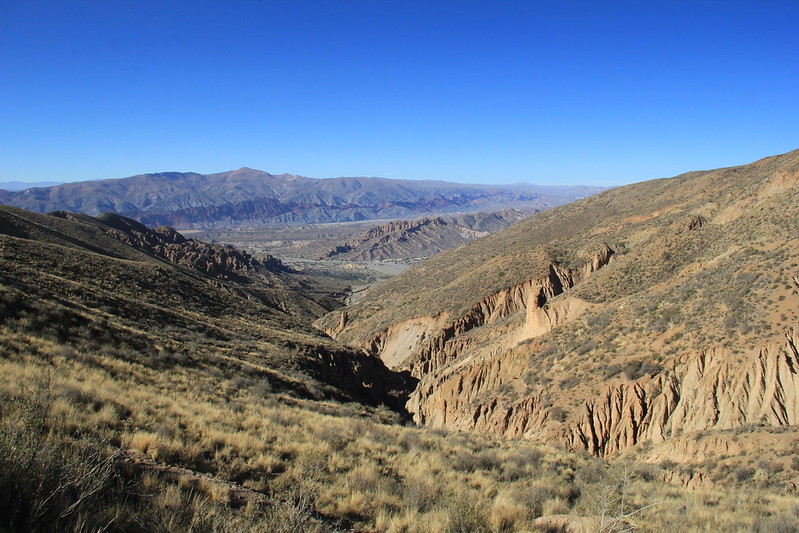 We stopped regularly in order to stretch our legs, photograph cacti, and remind ourselves just how deceptive that rich blue sky could be.  It was freakin’ cold outside!

Bolivia’s southern altiplano sits at an average altitude of 3700 metres above sea level.  That’s a whopping 2356 metres above the highest point in the UK.  Whilst being higher up often means that you’re above the cloud cover (hence the clear, often sunny skies), the reduction in atmospheric pressure brings the temperatures down, and although the stunning mineral-rich, geothermal landscapes will metaphorically do it for you, the lack of oxygen up here literally takes your breath away.

What a lot of people don’t realise is that a Salt Flats tour encompasses a lot more than the salt flats themselves.  Bolivia’s southwestern corner is an empty, desolate and enormous wilderness scattered with mining settlements, quinoa-producing villages, and endemic species of plants and wildlife.  Public transportation is scarce, and communication is solely by radio; there are no phones out in the Southwest circuit. 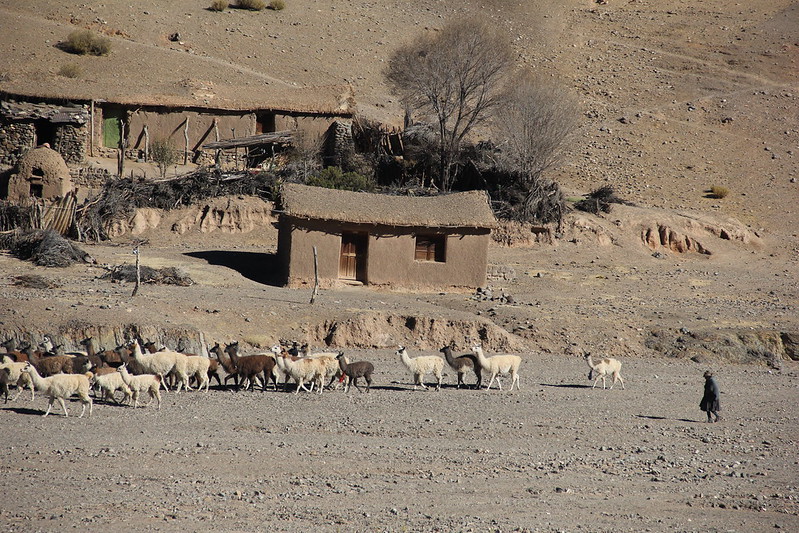 It’s an environment that creates a paradox of emotions; whilst at once the enormity of your surroundings can make you feel utterly tiny and insignificant, there is also the overwhelming sensation that you are an intrinsic part of something much bigger than you’ll ever be able to comprehend. 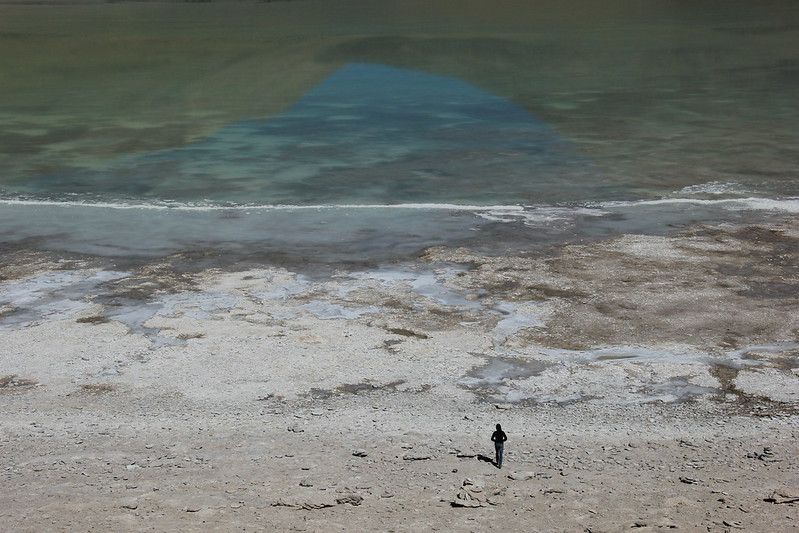 By the time we reached our ‘hostel’ – a simple brick building with concrete beds and nowhere near enough blankets to ward off the plummeting nighttime temperatures – we’d driven through all manor of stunning, other-wordly landscapes.  From vast areas of arid scrubland and towering mountain peaks, to deep river-carved valleys flanked by cacti, and endless deserts as far as the eye could see.

And day one was just the beginning.

You can read parts two, three, and four of my adventures into the Bolivian wilderness  by clicking on the appropriate links here.

The Road to Cajamarca: Peru’s Most Spectacular and Frightening Bus Ride