As I left the house that Friday morning, in the half-light of the breaking dawn, and made my way to the railway station to board a train bound for London, I was feeling a little more nervous about this particular city break than I ever have been in the past.

I hadn’t chosen the destination (in fact I knew very little about it), but I had been elected to plan, organise and book every detail of the trip.

In all fairness to my good friend Katy (with whom I’d enjoyed previous trips to Slovakia and Poland), she’d been through a pretty rough time in her life prior to our trip, and was in desperate need of a holiday.  Organising it for her was really the least I could do under the circumstances.

The problem was that I’d only arranged trips previously for either solely myself or myself and one other adult.  On our city break to Cologne there was myself and Stu, my friend and her husband, their two children (a 4-year old and a 1-year old), and another friend of ours.  We were travelling from three different areas in the country, and would require three separate rooms (either in a hotel or shared apartment).

Attempting to find some accommodation that offered the required sleeping arrangements for all parties involved was proving somewhat difficult, and I was having trouble confirming whether or not the two children needed their own seats on the aeroplane, and working out the pricing structure for airfares for children under five.

So I tried something different.  I logged on to Expedia, chose a joint flight and hotel search from the UK to Cologne, entered the number of adults and children, the ages of the children, how many rooms we required and how many adults/children would be sleeping in each room.

This was the one occasion that I actually relished the idea of allowing Expedia to organise the package for me.

I’m also very glad I did, for the individual cost of my part of the trip was just £100 – for return flights from Gatwick and three nights accommodation in a central 4-star hotel.

There was still the issue of hoping that everyone’s trains were on time, and that they caught the right connections in order to make it to Gatwick in time for the flight, but the major part of the trip was sorted.

I guess the beauty of travelling somewhere that you have zero expectations about beforehand, is that the destination will almost always pleasantly surprise you.  And Cologne (or Köln) definitely did – in more ways than one.

Here are a few of my highlights of the trip, and a selection of my favourite photographs to accompany them. 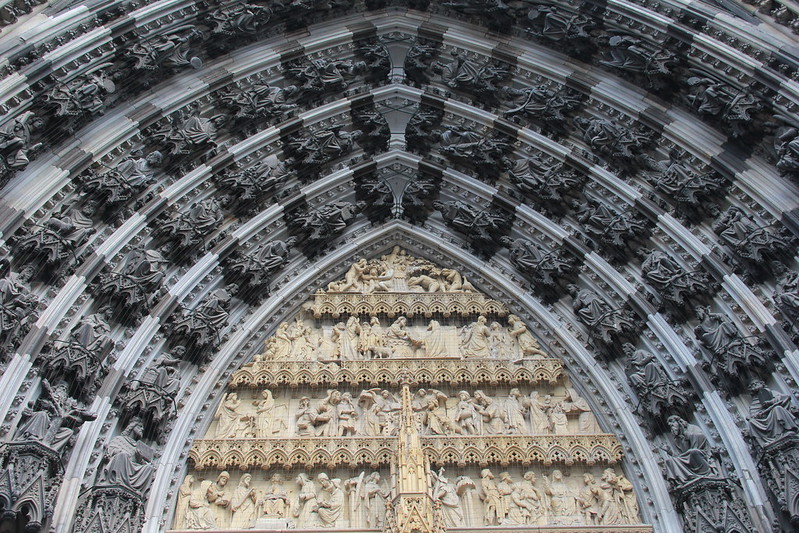 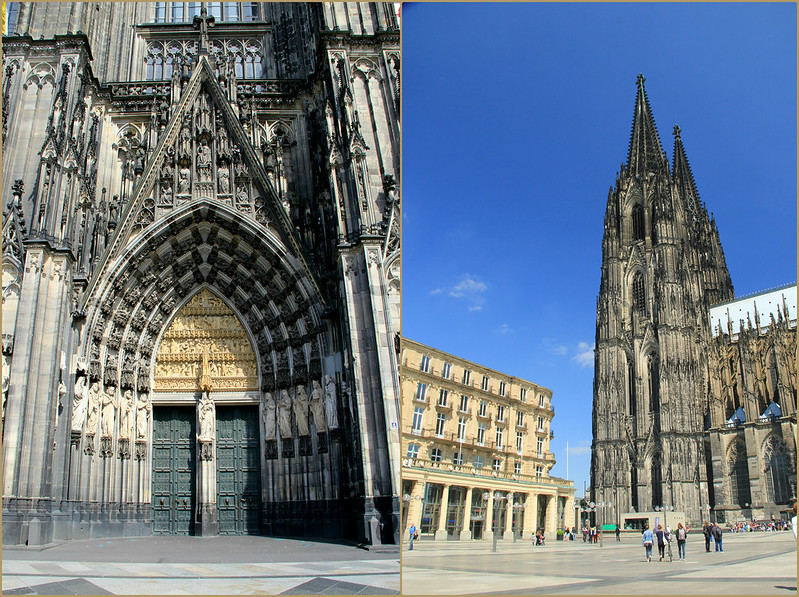 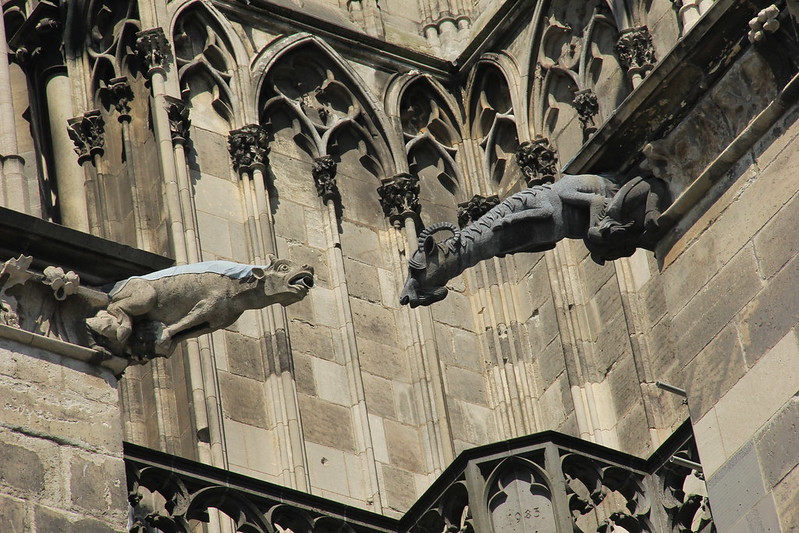 The Dom is Germany’s largest cathedral, and once you’ve attempted to capture it all in one single photograph, you’ll understand why (clue: unless you’ve got a super wide angle lens, you can’t!).
Construction began on this immense structure in 1248, but it wasn’t actually completed until 1880 – 632 years later!  It is now a UNESCO World Heritage Site that over 80 stonemasons, glaziers, roofers and other specialists work hard to maintain. 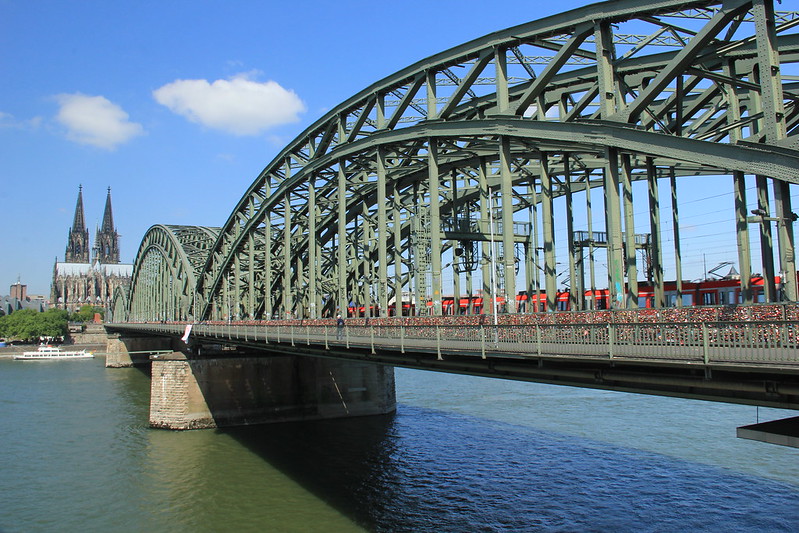 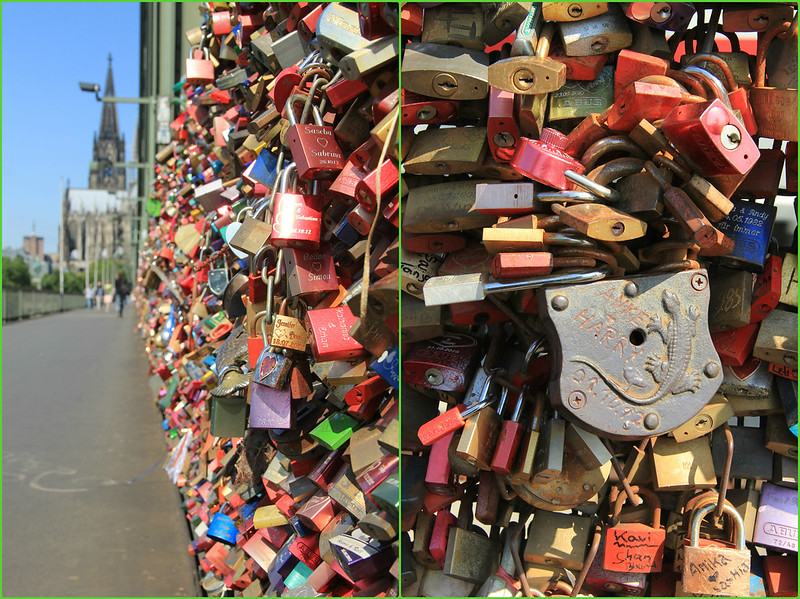 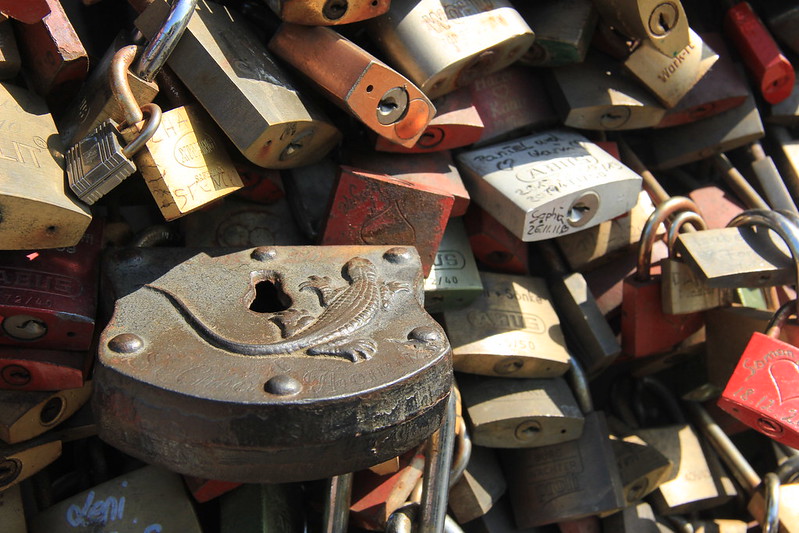 Hohenzollern Bridge was built between 1907 and 1911, after the original one was demolished due to its inability to handle the increasing traffic that passed over it.  Now the most heavily-used railway bridge in Germany, Hohenzollern connects Cologne’s central railway station with a number of major European cities on the other side of the Rhine.

I’m not entirely sure what I think about the idea of lovelocks on bridges (after all, 45 tons of them have recently been removed from Paris’ Pont des Arts bridge due to its partial collapse) but people have been decorating Cologne’s Hohenzollern Bridge with them since 2008. 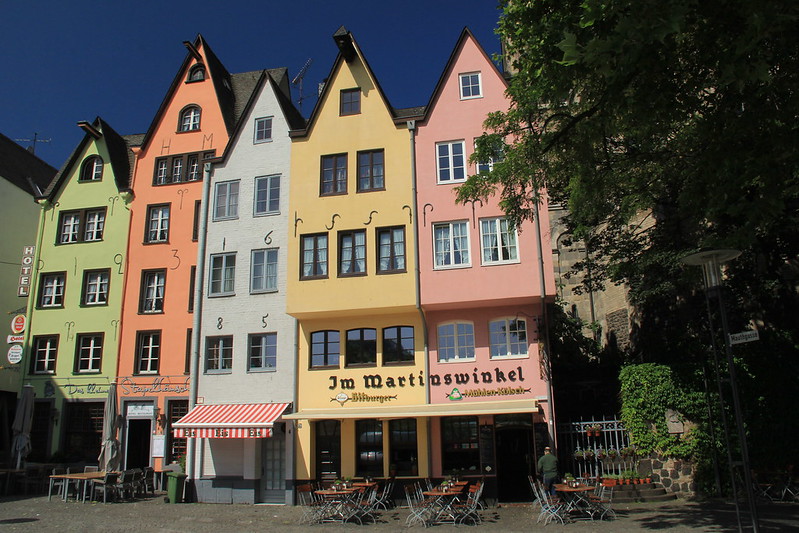 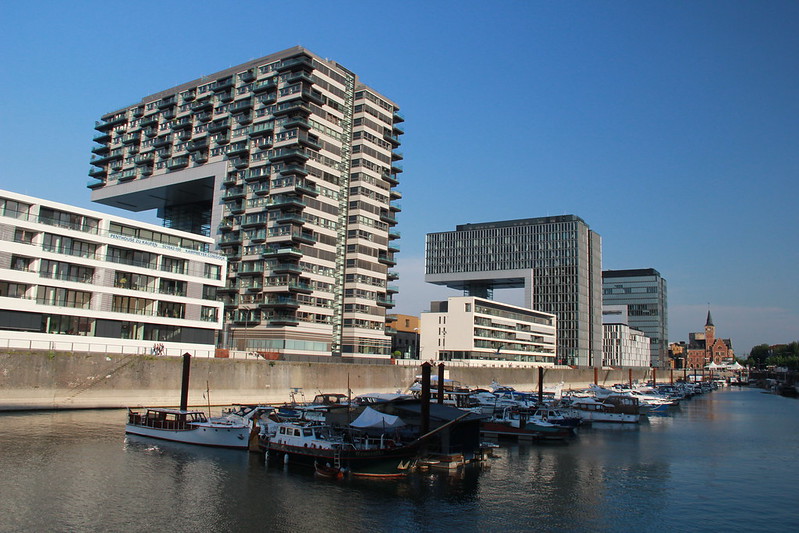 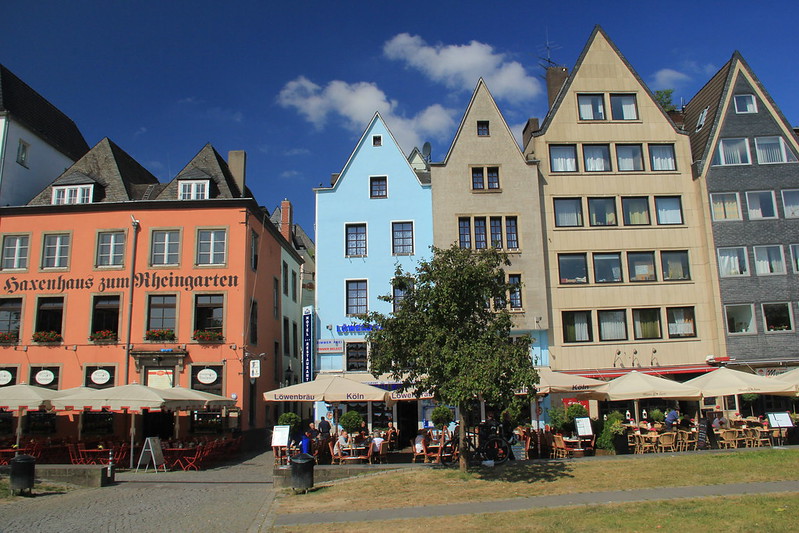 From traditional pastel-coloured buildings to modern masterpieces, there’s something in Cologne to suit everyone’s taste.

Our hotel was located in Rheinauhafen, the former harbour district of the city that has recently been the focal point of a massive urban regeneration project.  Located just south of the city’s historical core, Rheinauhafen waterfront is now home to an attractive mix of modern residential and office buildings, restaurants, and art galleries, as well as Europe’s Longest Underground Car Park and a skate park.

The centrepiece of the new Cologne promenade is the trio of buildings called “Kranhäuser” (crane towers), featured in the photo above. 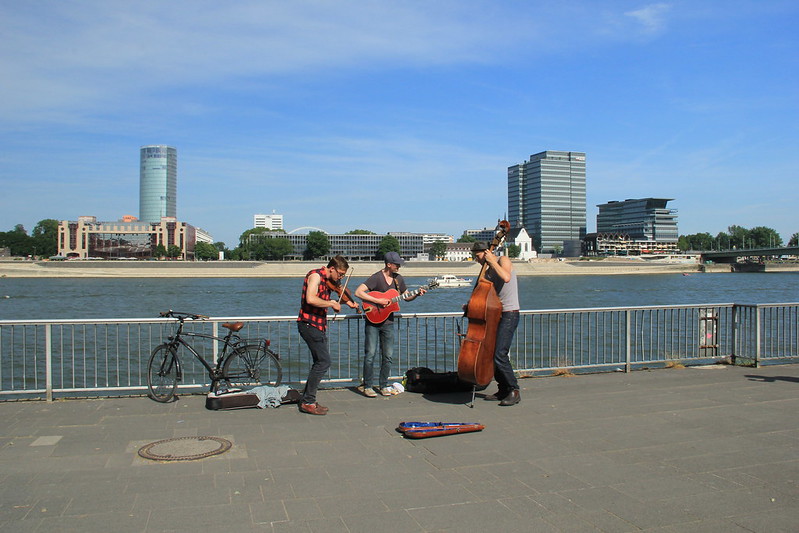 One of the joys of relaxing down by Cologne’s attractive riverfront is being serenaded while you do so.  I’m a huge music fan; it brings passion and soul to a city, and can transform mundane experiences into unforgettable memories.  I know it’s a bit difficult to tell from a photo alone (why do I always remember to turn the video on AFTER the event?), but these guys were awesome!

A Ride on Wuppertal’s Hanging Railway 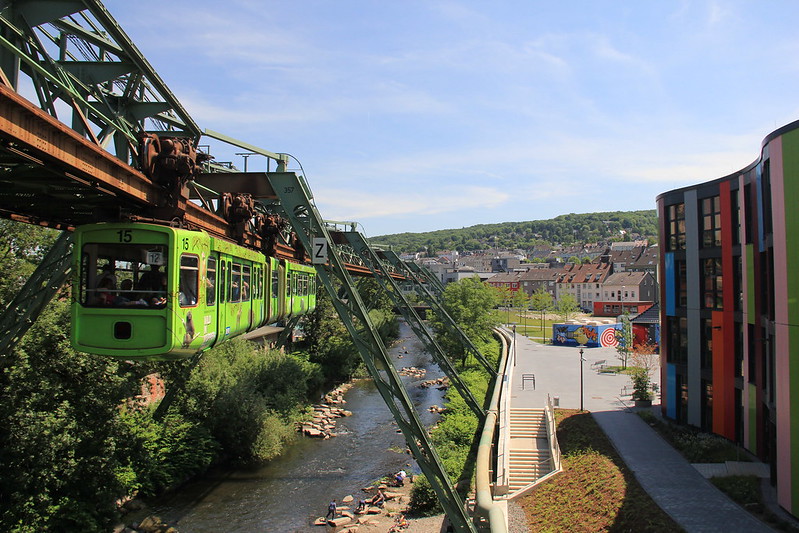 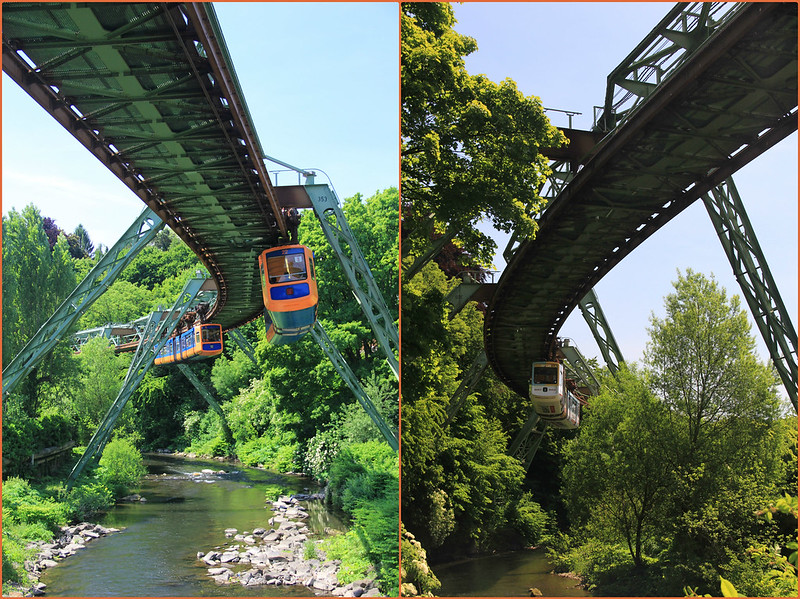 Ok, so this is not strictly in Cologne, but Wuppertal is just a 30-minute train ride from Cologne’s central station, and home to Germany’s “Schwebebahn” (floating train) – the world’s oldest elevated railway with hanging carriages, opened in 1901.

The Schwebebahn runs a route of 13.3 kilometres at a height of about 12 metres above the river Wupper.  Whilst it’s become something of a tourist attraction (my friend’s kids loved it!), it is still used as a means of local public transport too, serving Wuppertal’s 350,000 residents seven days a week.

Fascinating for little kids and big kids (me!) alike, Cologne’s Lego store is full of unique and intricate creations, including this Volkswagen campervan and larger-than -life-size Woody – from Pixar’s Toy Story. 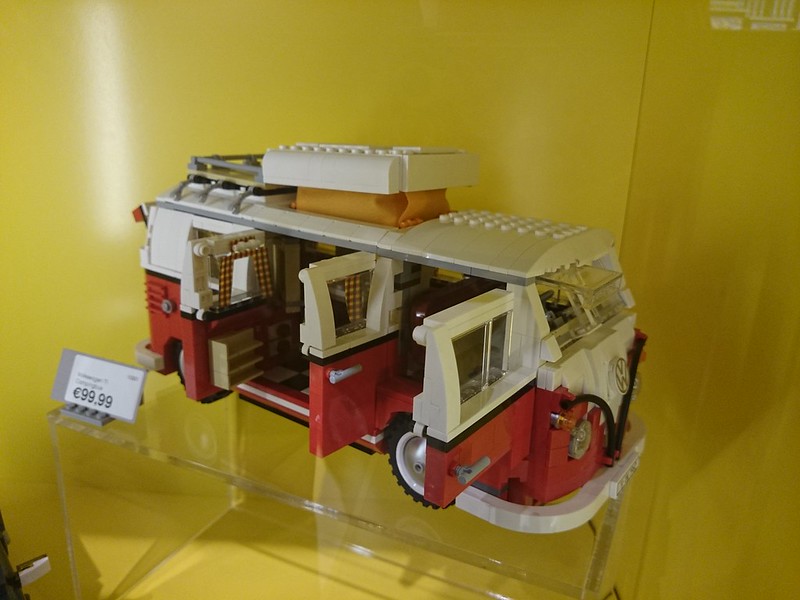 Whilst Cologne with kids was a very different experience to that which I’m used to, it was definitely an enjoyable one all the same, and I may not have discovered this beautiful city had I not left the choice of destination up to someone else for a change 😉

Have you visited Cologne before?  Any other German cities you’d recommend? 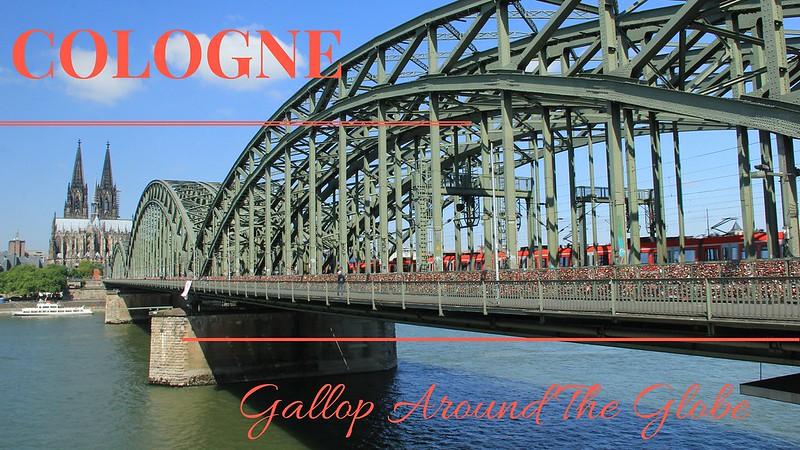 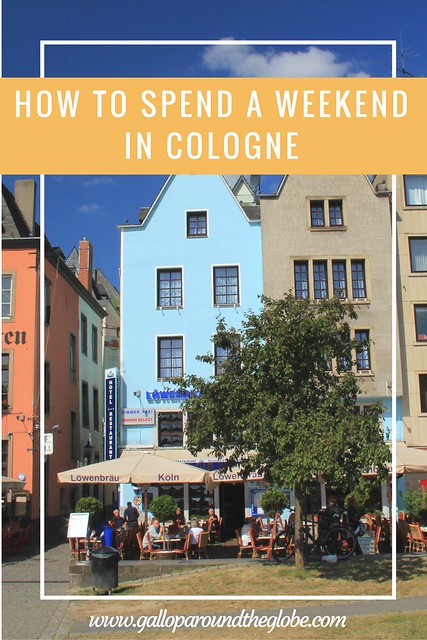 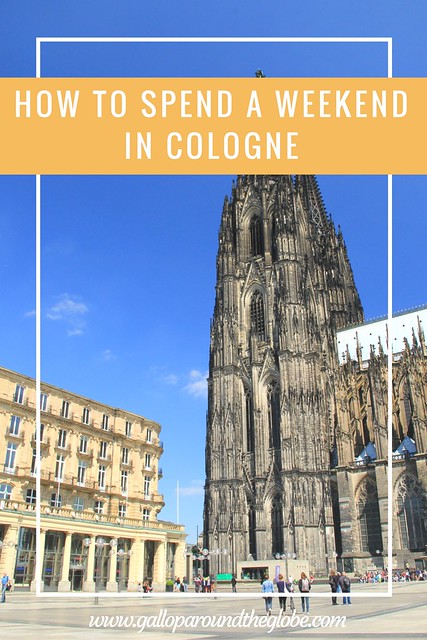 The Wonder of New Discoveries and Intrepid Adventures: A Solo Hiking Trip Through Catalonia | Gallop Around The Globe

Castles, Canyons and Coastlines: A 7-day Albania Itinerary by Car

Getting My Feline Fix at Newcastle’s New Cat Café, Catpawcino