Getting My Feline Fix at Newcastle’s New Cat Café, Catpawcino

Anyone who knows me will tell you how much I adore cats.  I find it impossible to pass one without bending down and giving it a little stroke, and my holiday snaps are usually peppered with photographs of the feline friends that I’ve met along the way.

However, because I travel a lot and I also live in a second-storey flat with no outside space, I’ve never felt that getting a cat of my own would be a viable option (or very fair on the cat!).  As a result visiting a cat café has been on my travel hit list for some time.  Coffee and cats; what better combination could there possibly be?

So where did the cat café concept originate from?

The world’s first cat café, ‘Cat Flower Garden’, opened its doors in Taipei, Taiwan, in 1998. It was started as a venture to give young, over-worked city dwellers the opportunity to unwind after a hectic day at the office, but developed into a bit of a tourist attraction.

Cat cafés didn’t truly take off though until they reached Japan (no surprises there; most people assume the concept was born in Japan) in 2005, and its capital city is now home to dozens of them.

It took a while for England to catch on, but in 2014 Lady Dinah’s Cat Emporium, in London’s hip, up-and-coming East End, became the first cat café to open in England.

I attempted to book a slot to coincide with numerous visits to London, but Lady Dinah’s was fully-booked for months after it first opened.  Being the only cat café in England’s capital city, I expect that the situation hasn’t changed a great deal now.

I was therefore delighted to find that Newcastle’s newest cat café (yes the city actually has two!) had plenty of slots available just a week before I was due to visit the city.

I visit Newcastle Upon Tyne quite regularly, as one of my good friends moved there in 2005, and has subsequently married someone who I now consider to be another one of my good friends.  It’s a beautiful, innovative, constantly-evolving city, and has the bonus of being within easy reach of the rugged Northumberland coast.

On this particular occasion I was visiting to celebrate my friend’s birthday.  Her and her wife have three gorgeous cats of their own, so a stop at the newly opened Catpawcino required absolutely no persuasion whatsoever. 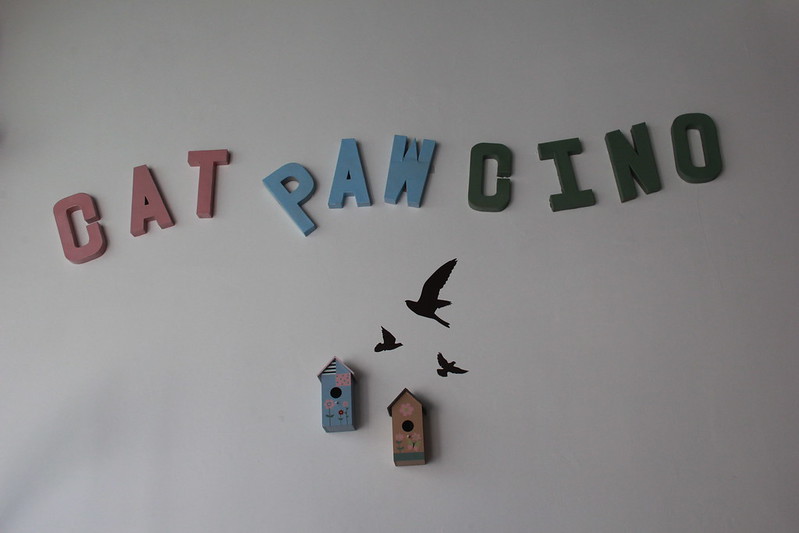 Catpawcino was conceived by Sarah Zong, who  – eight years previously – moved to Newcastle from China in order to study for a marketing degree.  During a 2013 trip to China to visit family, she stumbled upon QiLin Cat Café, and felt inspired to start a similar venture in the city that she now calls home.

Two years later her hard work and research eventually paid off when Sarah was awarded a business endorsement from Newcastle University.  She quit her job, teamed up with a local artist and designer, and the rest, so they say, is history.

Catpawcino opened its doors in October 2015.

We had a booking for 1:30pm on the Saturday afternoon which we made easily through their website just over a week beforehand.  However we later discovered that it’s not actually necessary to book in advance if there are fewer than five people in your party.

When we arrived we were cordially greeted by Sarah who asked us to wash our hands with the anti-bacterial gel in Catpawcino’s entrance lobby (designed to protect the health and well-being of the cats and prevent the spread of germs) before welcoming us into the café itself.

The café has a large front window overlooking the quayside, which not only lets in a lot of light (and sunshine in the summer months), but also seems to be a favourite spot for the cats to sit and watch the world go by.

Catpawcino’s decor is minimalist but cosy, with some lovely design touches, and the café has a warm, calming atmosphere.  There are plenty of climbing frames and tunnels for the cats to explore, plenty of cushions and beds for them to sleep on, and plenty of toys for them to play with.  All five felines seemed happy and relaxed and completely at ease in their surroundings. 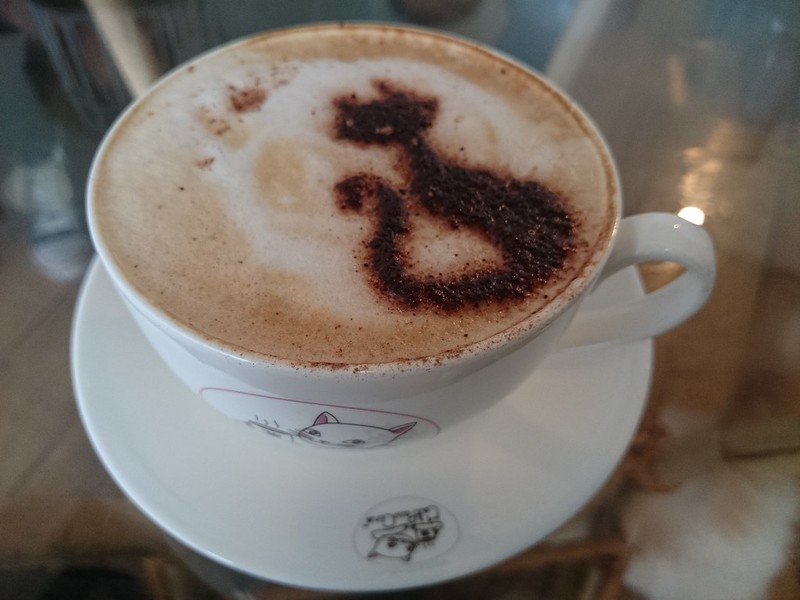 On each table is a menu of drinks (including some speciality Chinese teas) and cat-themed cakes and biscuits, as well as a selection of soups and sandwiches.  Together with the menu you’ll also find a little photo album featuring adorable snaps of each of the cafés five cats, and a short write-up telling you a little bit about them. 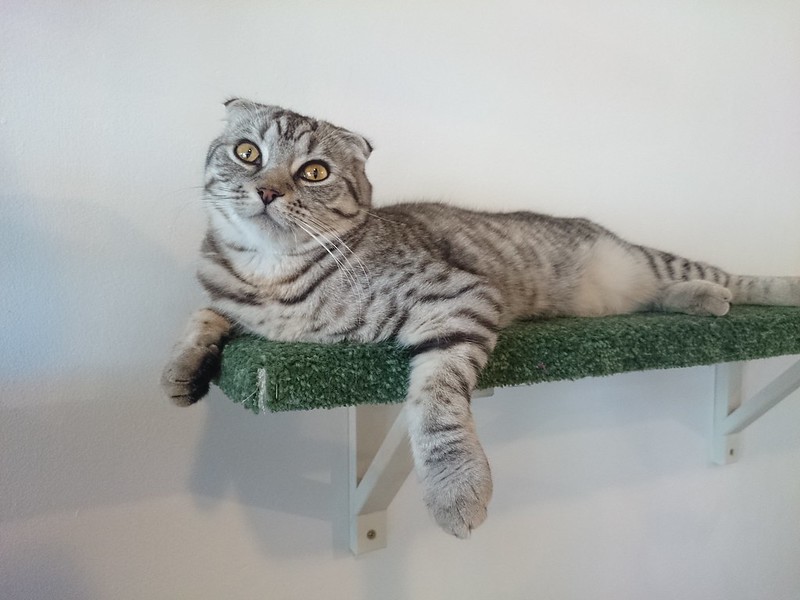 I fell in love the instant I saw a photo of Ebby on Catpawcino’s Facebook page, and when I actually met her in person I desperately wanted to take her home with me.  She’s the second youngest of the five cats (born in February 2015) and definitely the most playful. 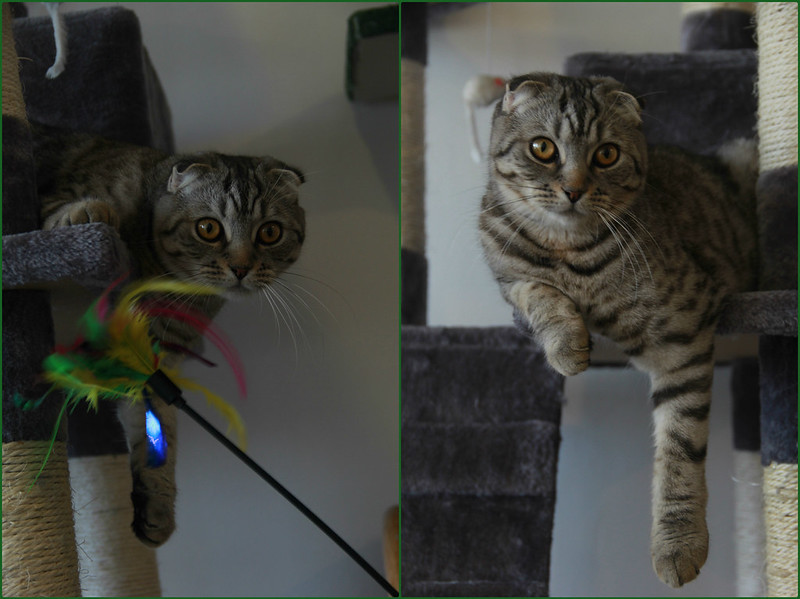 Her breed is a rare Scottish Fold (a natural dominant gene mutation causes the ears to fold forward) that are characteristically intelligent and sweet-tempered, and easily adaptable to new people and situations.  This means that Ebby is perfectly suited to her environment at Catpawcino, and to getting on well with the other four cats.

Newcastle born and bred, Alfie was Catpawcino’s first cat.  He’s a Ragdoll breed with the most amazing blue eyes you’ve ever seen.  Calm and affectionate by nature, he’s like a big brother to the other cats and can often be seen cleaning the other kittens. 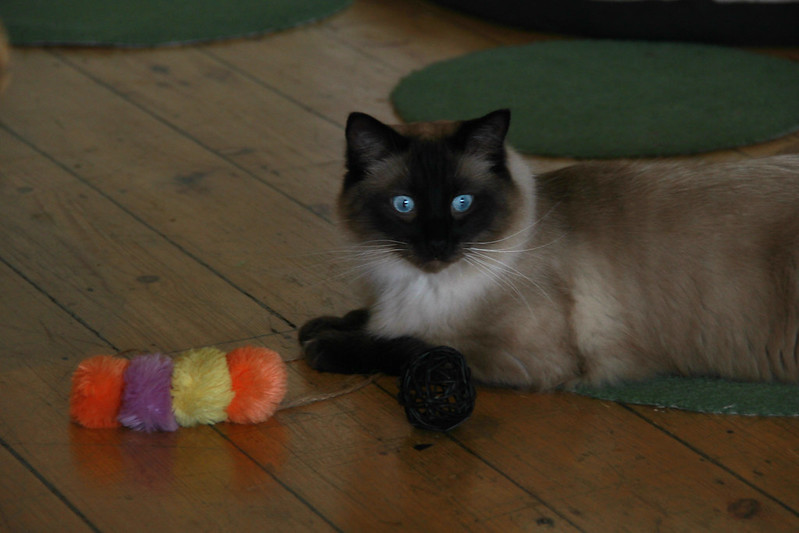 Betty is a British Blue and the shyest of the five.  But what she lacks in confidence she makes up for in prettiness, and she’s a curious creature; give her time and she’ll find the confidence to approach.  Once she feels comfortable enough around you, she can be a playful little soul. 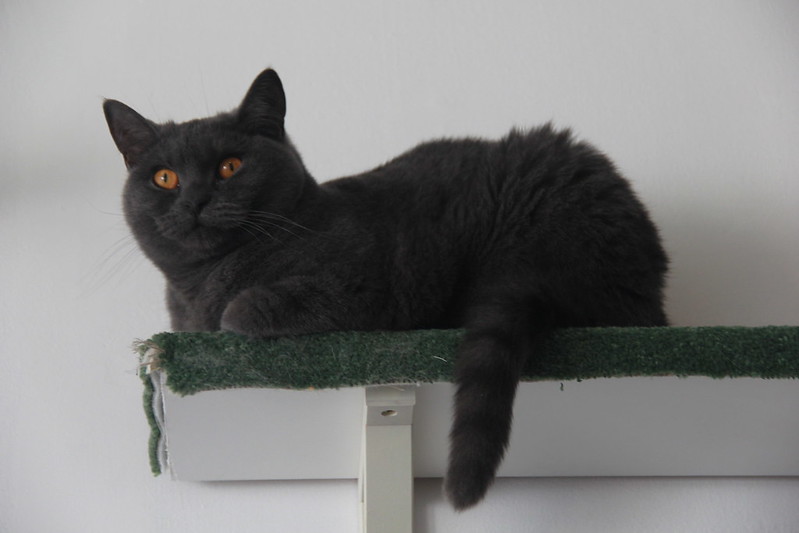 Born on the 11th of June 2014, Chocolate is (funnily enough) a chocolate-coloured Point Birman and shares the café with his twin brother, Davin.   Chocolate loves attention and affection, and you’ll want to shower him with it when you feel how soft his fur is. 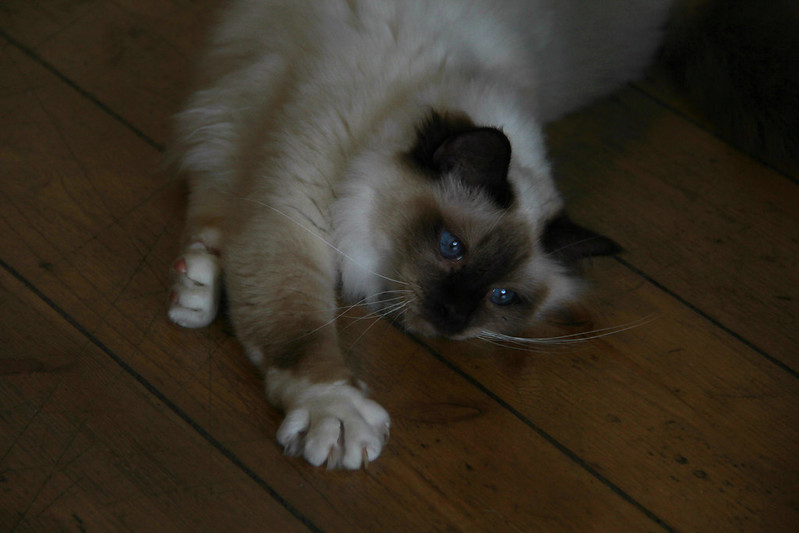 Chocolate’s twin, Davin is a cream-coloured Point Birman.  He’s super soft and fluffy with beautiful blue eyes and loves to nap.  A LOT.  I don’t think I caught him with his eyes open for more than a few minutes during our visit.  He’s a pretty boy though, so he’s a pleasure to photograph even when he’s asleep. 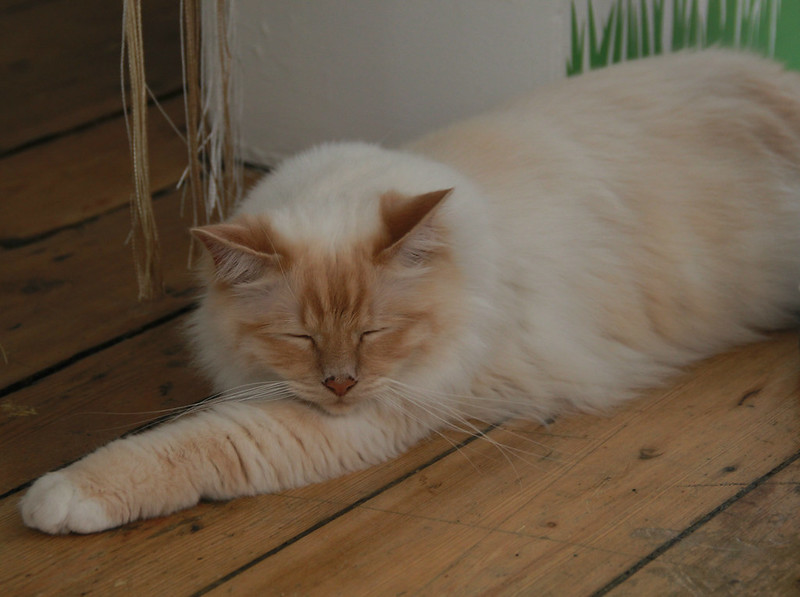 Have you visited a cat café before?  Where was it?  I’d love to hear about your experiences in the comments below!

Sharing My Love Of Travel: A Giveaway

A Wet and Windy Weekend in Historic Canterbury