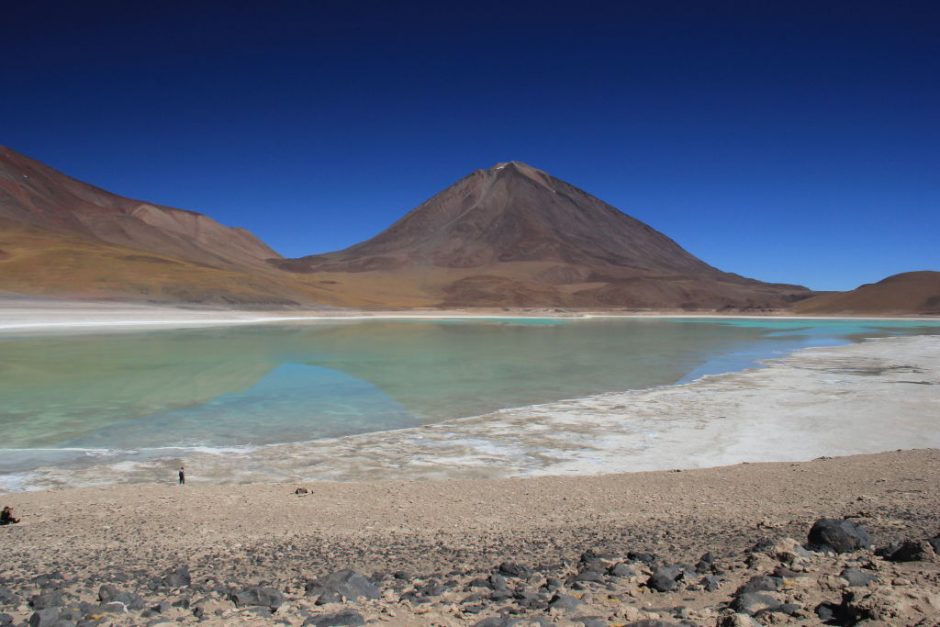 I often find myself having to wake up earlier when I’m on the road than when I’m at home working a full-time job five days a week.  Whether it be to make an onward journey by bus or train, catch a flight, join a tour, witness a sunrise, or simply to take advantage of the complimentary hostel breakfast (you can’t afford to turn down free food when you’re travelling on a budget), I rarely sleep in when there’s a world of new experiences waiting for me outside. 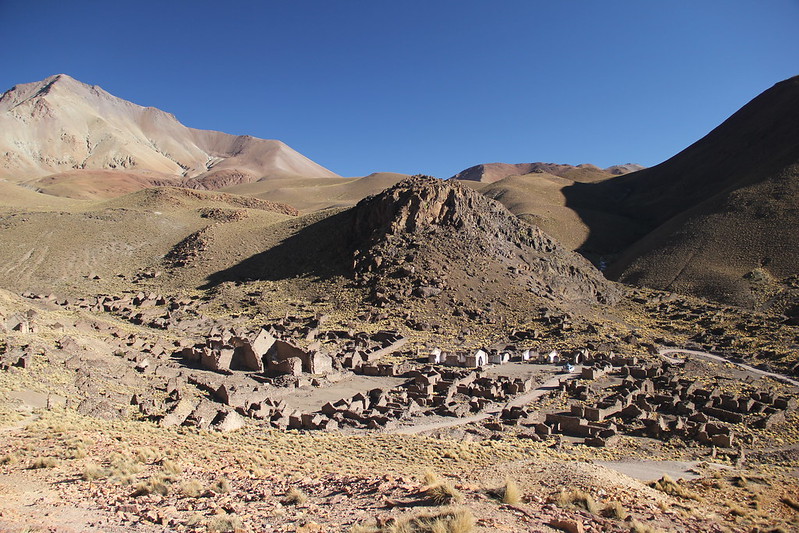 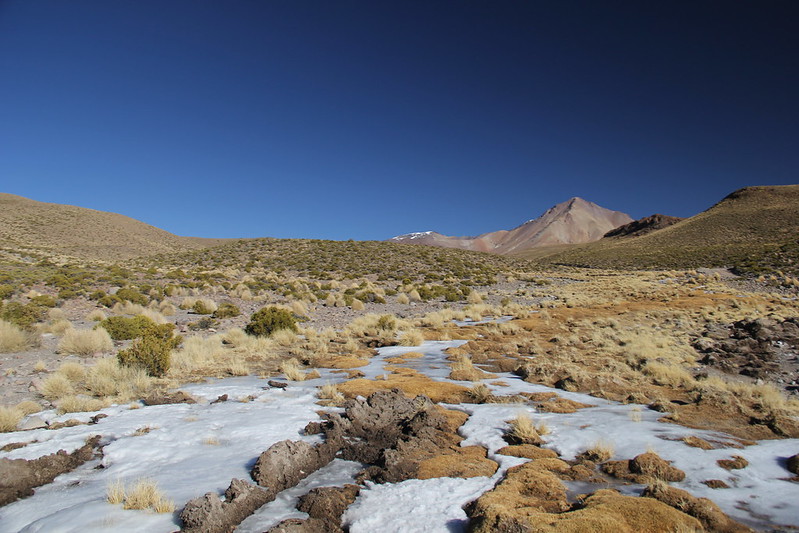 Although our days on the salt flats did not start quite as early as those on the Inca Trail, we were wrapping our cold hands around hot mugs of sweet coca tea and tucking into bowls of thick, warming porridge by 6:30am, in order to hit the road by around 7.

Our convoy consisted of two jeeps, and therefore two drivers, one cook, and six travellers.  Stu and I shared one vehicle with a young couple from the Netherlands, Veerla and Koen, and in the other was Maggie, a fluent (compared to me!) Spanish speaker from the U.S and Paul, an older dutch gentleman with a backpack full of wine (of which we were very grateful the night before) and a head full of stories. 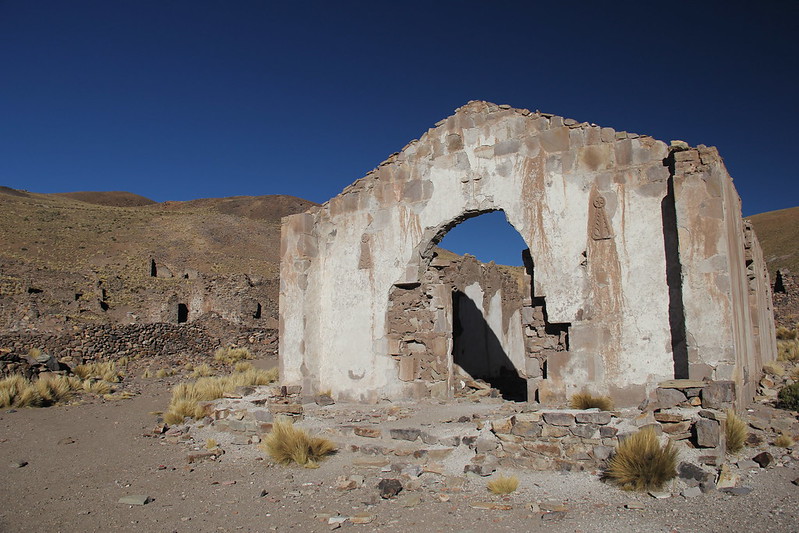 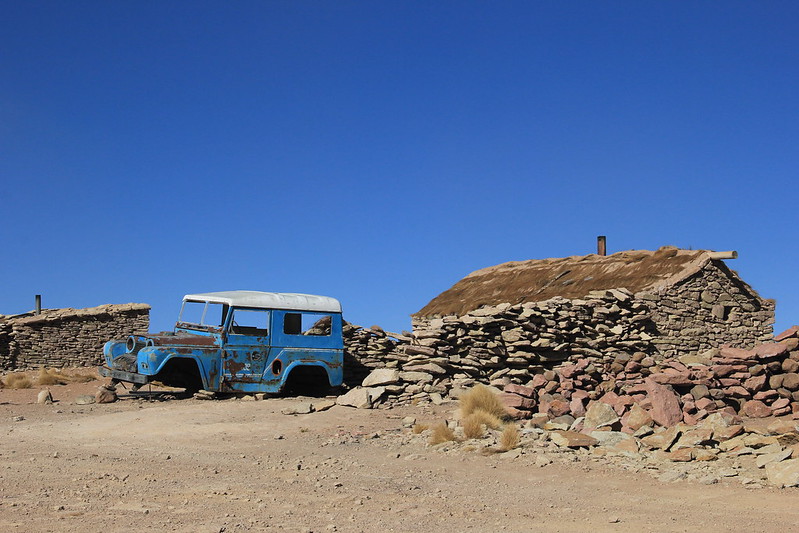 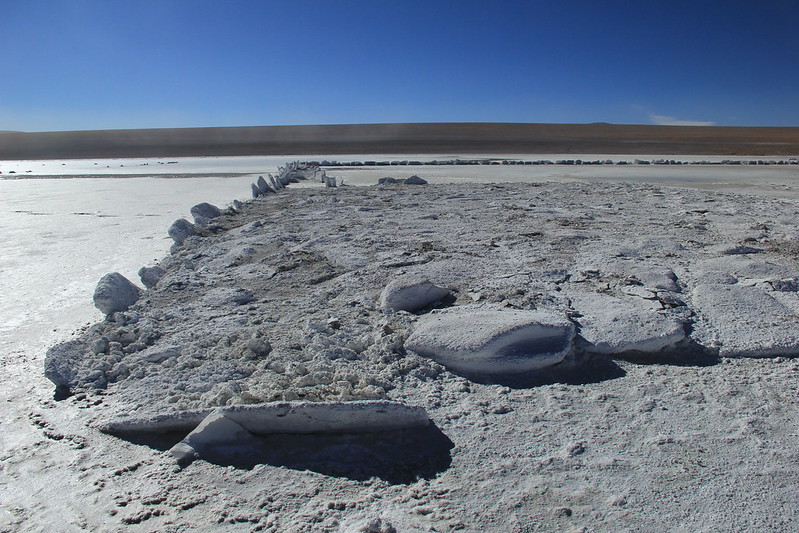 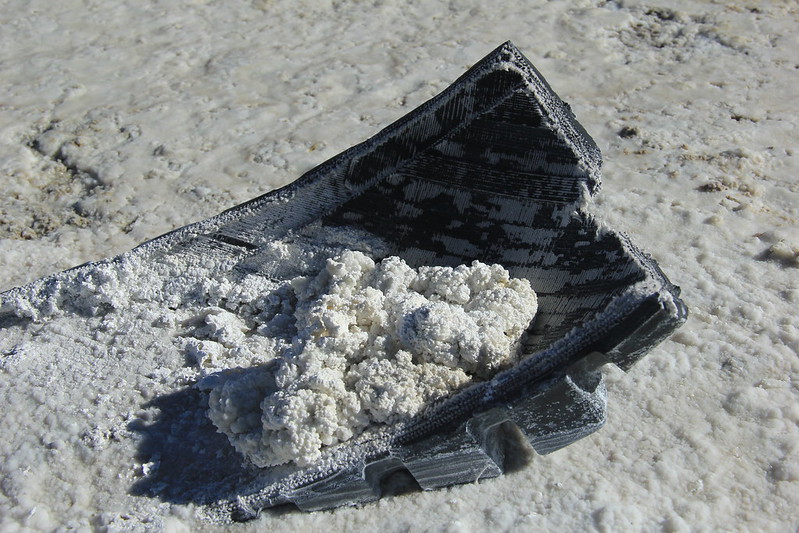 Whilst day one had been an incredible introduction to the strange and surreal emptiness of the Bolivian wilderness, on day two the landscapes really began to reveal their true colours.

We passed a couple of abandoned villages, and some smaller salt flats (it’s not all about the Salar de Uyuni; Bolivia’s southwestern altiplano is full of salt flats) before arriving at our first of what would turn out to be five uniquely stunning lakes, whose mere existence seemed almost miraculous is this vast expanse of endless desert. 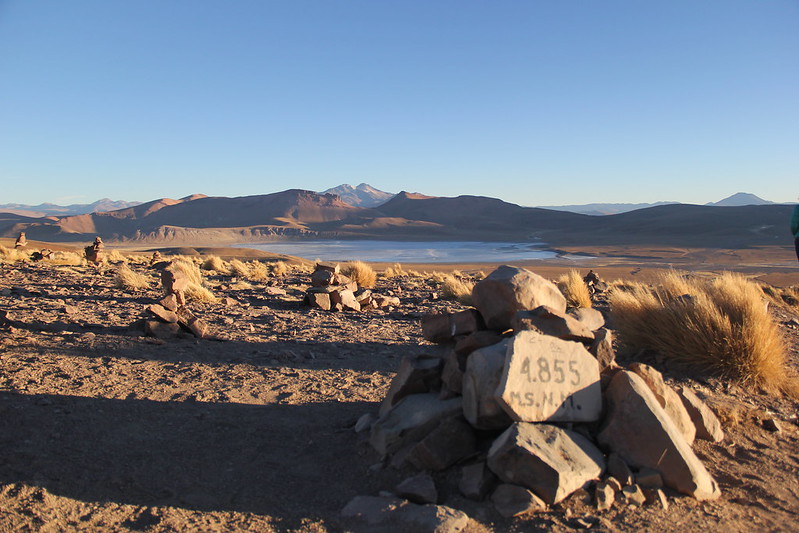 The first lake was – for the most part – frozen over, its dried up, interestingly-textured shoreline providing an intriguing foreground for our photographs. 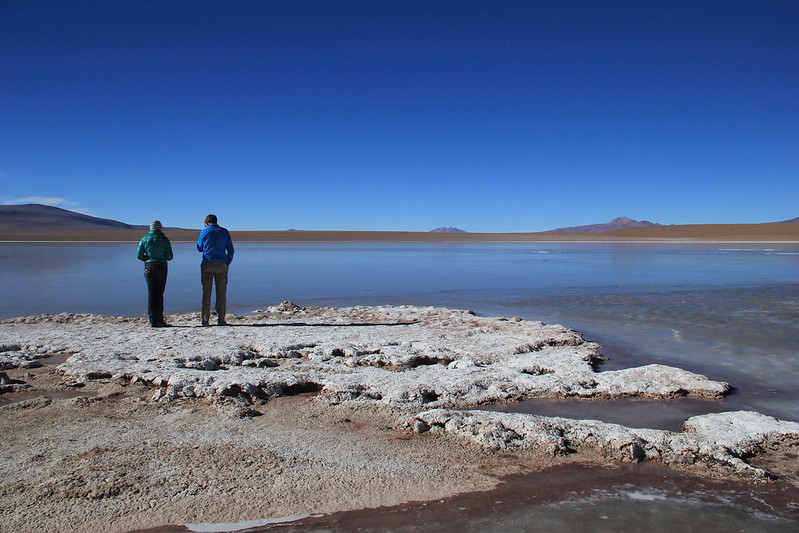 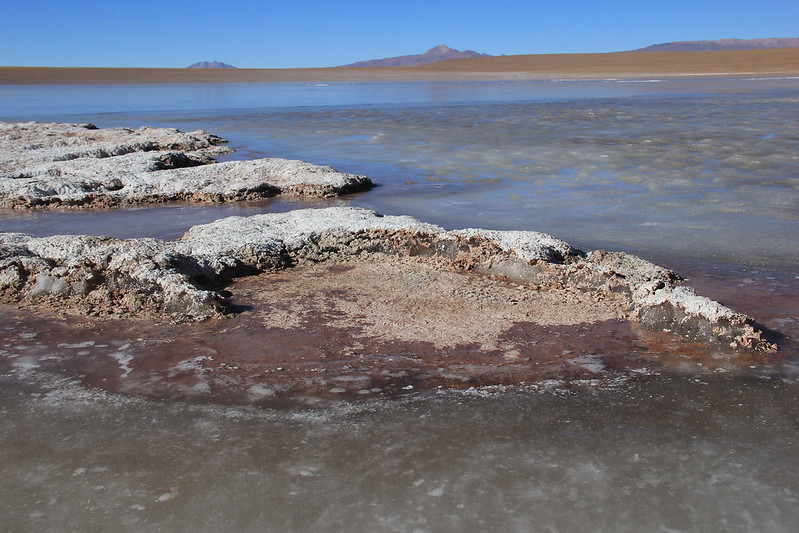 The ready-made ice rink was also too much for my inner child to resist, so in between  staring in open-mouthed awe at the spectacular landscapes all around me, I gleefully slid rather clumsily across the frozen water, arms outstretched as if I were attempting to balance on some kind of invisible snowboard.

Under that enormous blue sky I felt a liberating sense of energy and carelessness; at once so small but in some way intrinsically connected to my surroundings.

Whilst the Bolivian altiplano is not somewhere I’d want to find myself alone (when freedom and a sense of renewed vigour and passion would rapidly turn to loneliness and fear), with the reassurance of two working vehicles, and a knowlegeable guide and two capable drivers,  I couldn’t have been happier roaming those surreal, desolate, and beautiful landscapes, with their unusual plants and animals. 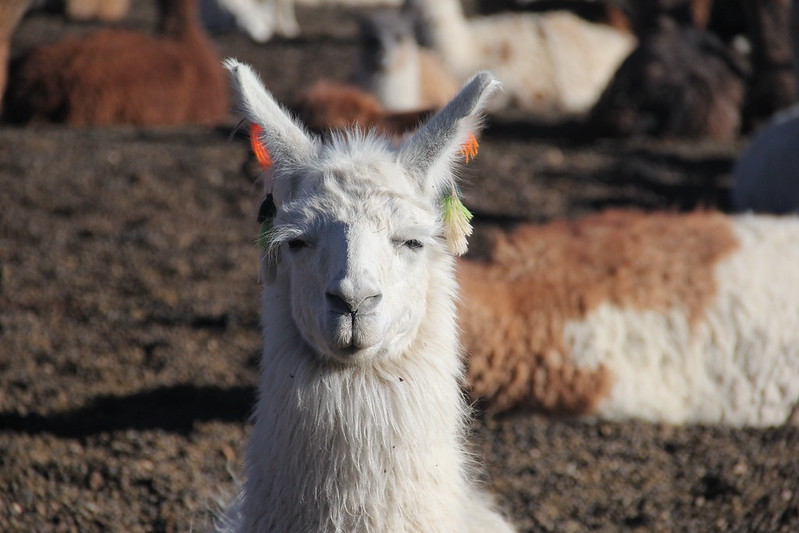 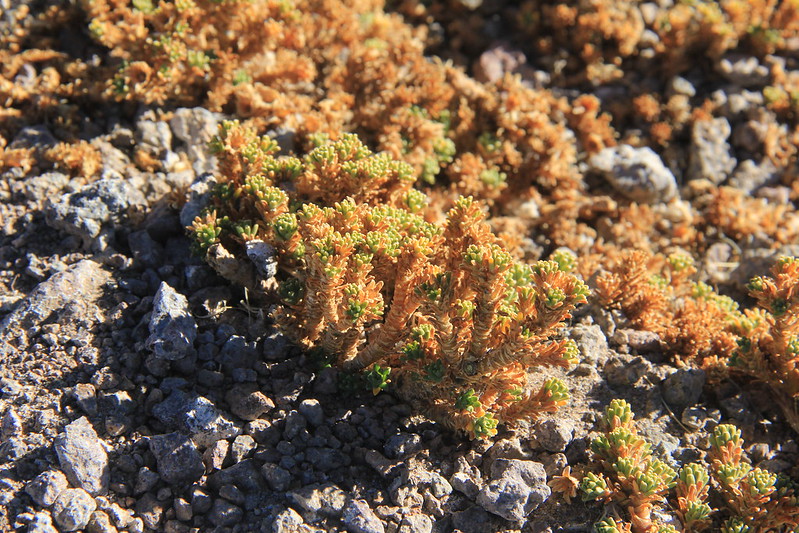 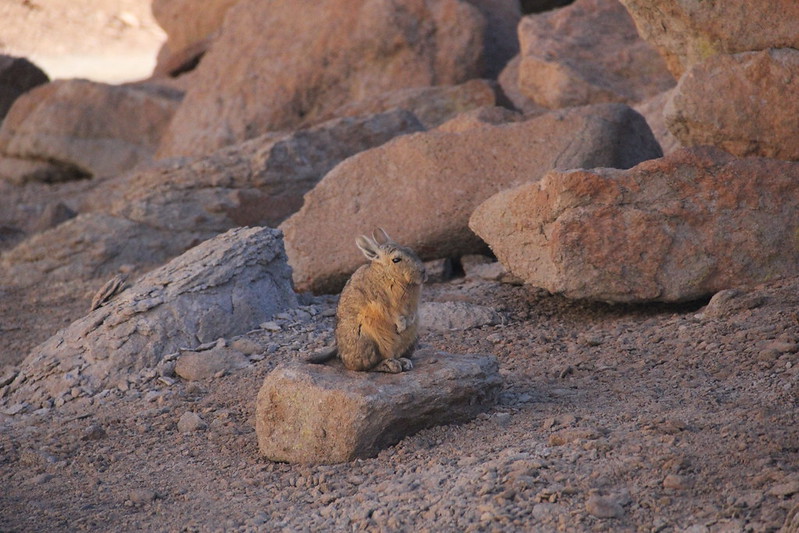 One of the many things you learn to look forward to on a Salt Flats tour, are lunchtimes.  But not so much for the food you’re provided with (although I did enjoy a healthy mix of rice, vegetables, potatoes, eggs, and salad) as for the amazing backdrops you have the fortune to gaze upon whilst munching on a juicy tomato or two. 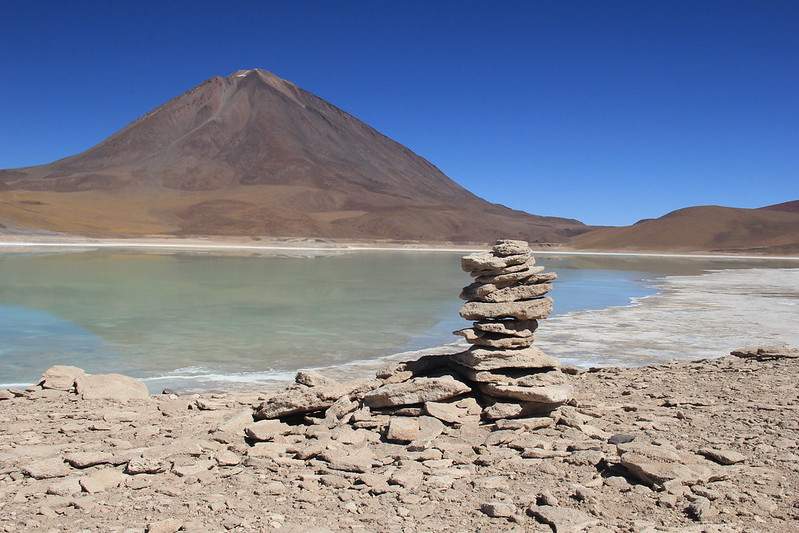 Our lunch stop on day two was the breathtaking Laguna Verde (green lake), situated 4400 metres above sea level and backed by the dormant 5960m Licancábur volcano. The lake is so-called as a result of the high concentration of lead, sulfur, arsenic, and calcium carbonate, which turn the waters a peculiar, yet spectacular emerald green colour.  This phenomenon is then further enhanced by the effect that a variety of microscopic organisms that live in the lake have on the intensity of the colours that we see.

These microscopic organisms appear as different colours, of varying brightness, depending on the salinity and temperature of each water body or sub-basin.  What this means is that the appearance of the lake is in constant flux; at times the waters give off nothing more than a pale blue-green hue, but at others the depth of colour is so intense it’s mesmerising. 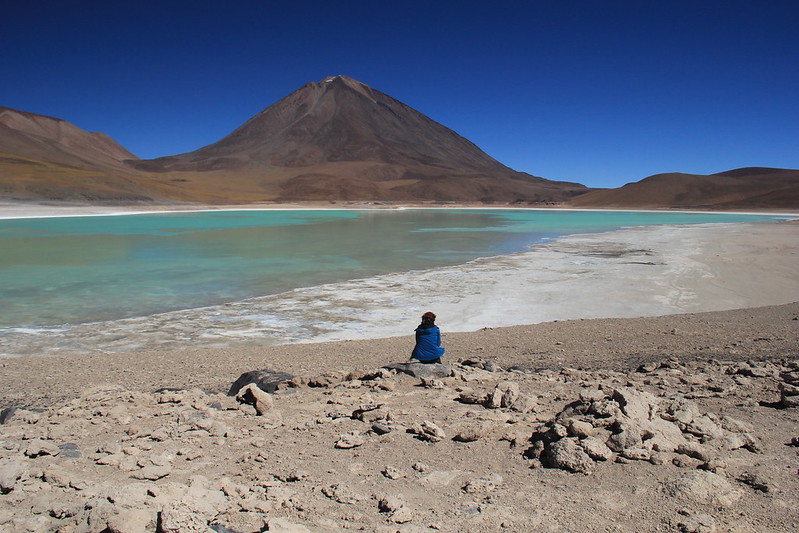 And to top things off as we were leaving, our guide managed to spot a zorro del desierto (desert fox), who curiously approached our vehicle and stopped just long enough for us to snap a few photographs of him. 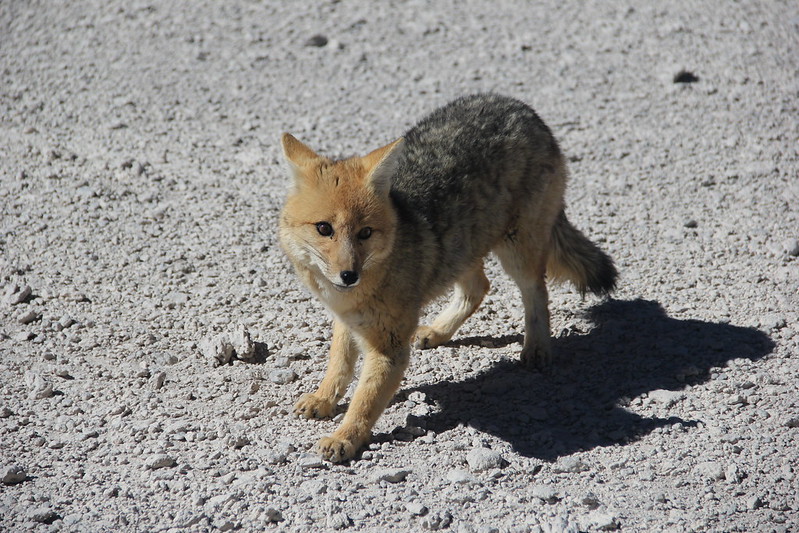 Our next stop instantly took me back to the geothermal landscapes we’d experienced in Iceland earlier on that year.  Sol de Mañana (meaning ‘morning sun’ in Spanish) is a geothermal field in the Sur Lípez Province of south-western Bolivia, characterised by intense volcanic activity which creates boiling mud lakes and steam pools.

It was almost like we’d set foot on the moon.  There were huge craters containing a thick, bubbling, clay-like substance, steam rising off its surface.  The colours of the craters ranged from fiery reds, to rusty browns and golden yellows, and the boiling liquid inside bubbled away in various shades of whites, greys, browns, and blues. 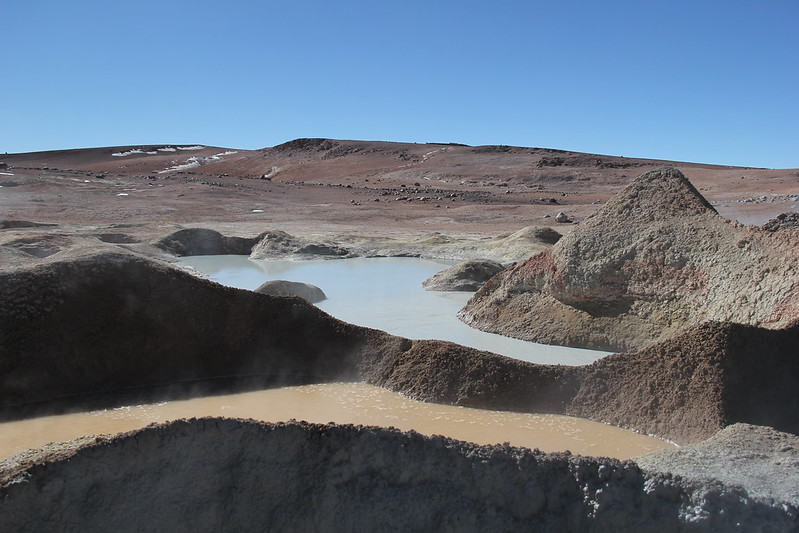 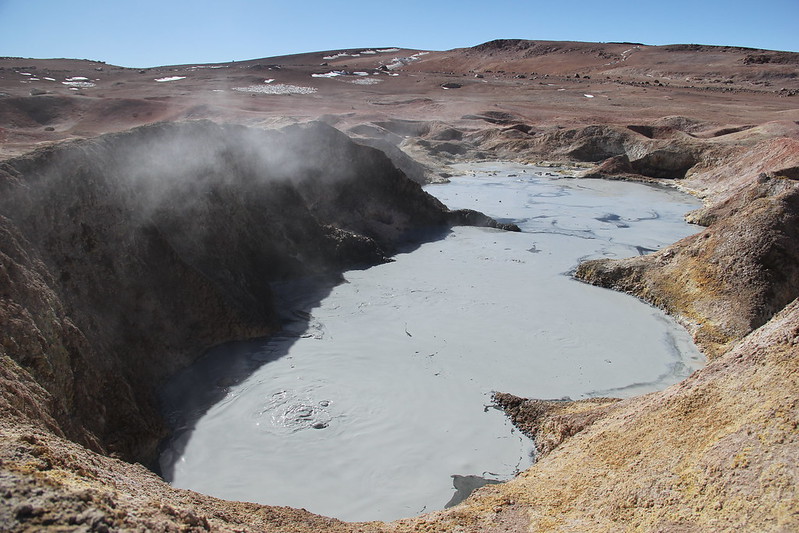 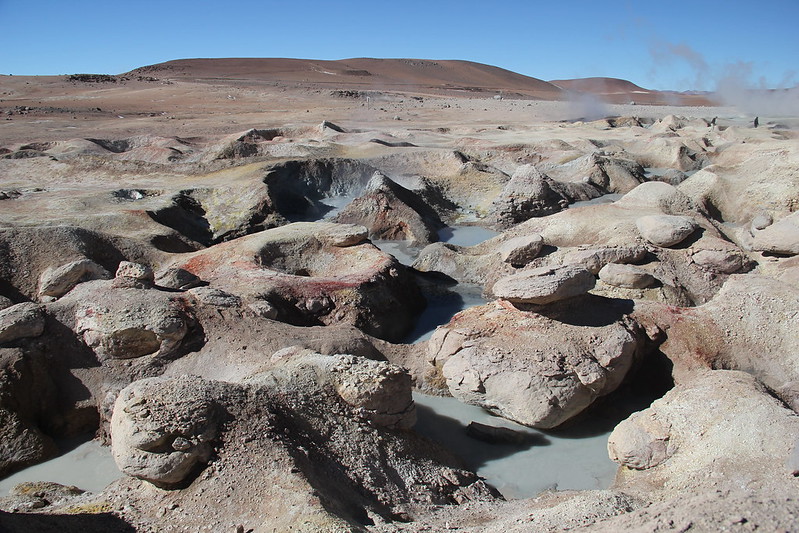 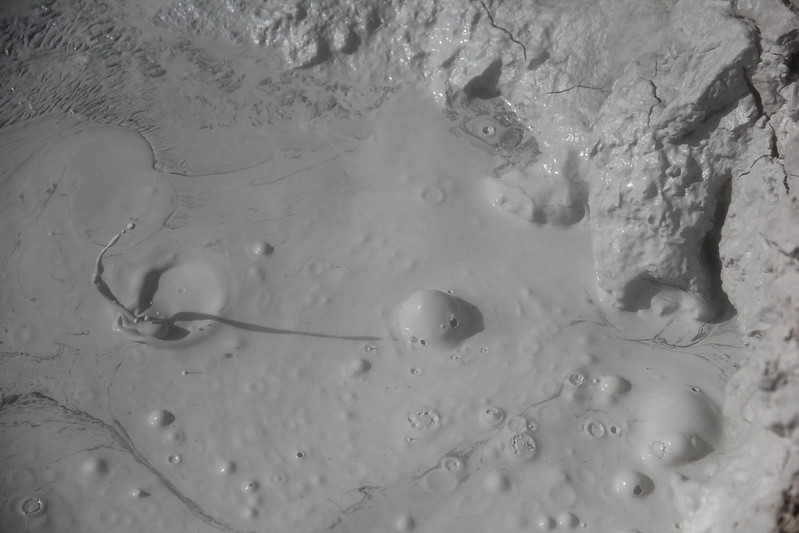 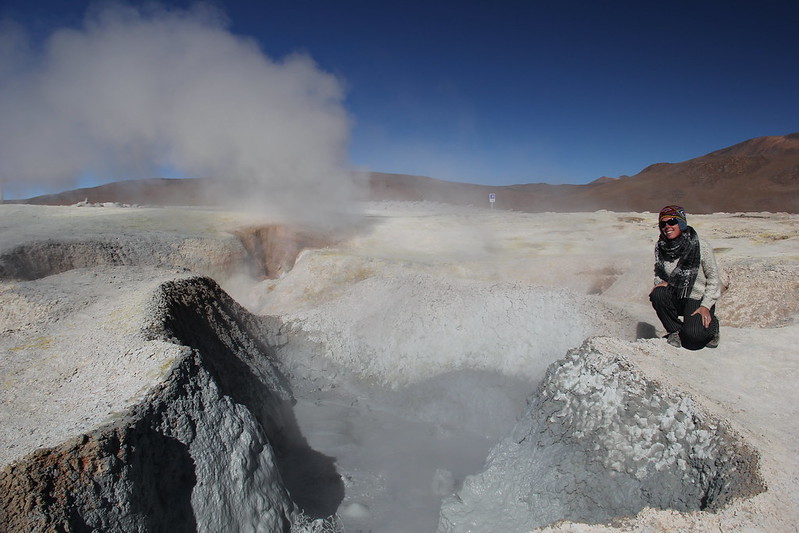 And, just at that point when I thought that Bolivia couldn’t possibly surprise me any more that it already had, we came upon a hot spring – slap bang in the centre of the Bolivian wilderness.

Whilst the temperatures outside were hovering a little above freezing, the spring water promised to be a toasty 37 degrees, so I stripped down to my bikini at lightning speed, abandoned my clothes by the side of a nearby hut, and quickly lowered myself into the warm waters.

Now I’ve bathed in hot springs before, most memorably in New Zealand and also in Iceland’s Blue Lagoon (where I seriously dread to think what the outside temperature was; my fingers nearly fell off trying to operate my camera!), but nowhere compares to the location of this one in Bolivia. 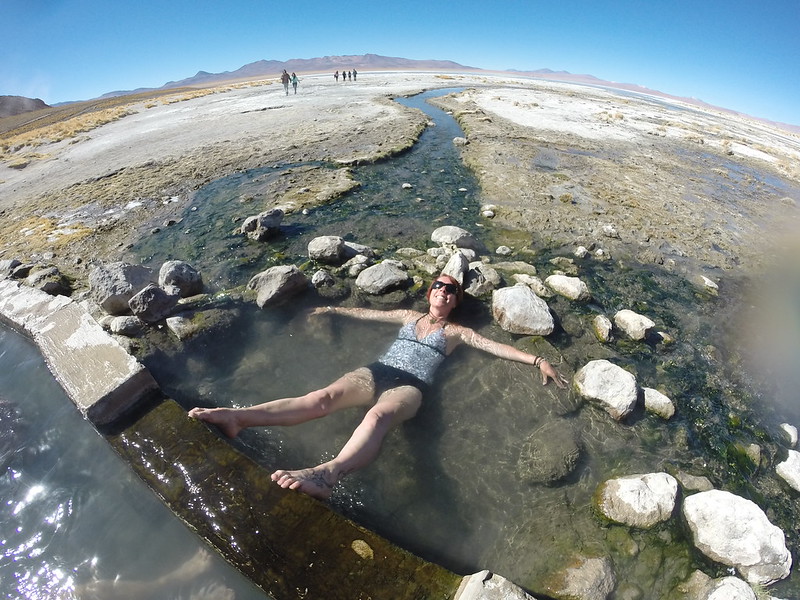 Getting dressed was a rather interesting experience – hiding behind the jeep clutching all my clothes to avoid them landing on the dusty desert floor, whilst simultaneously trying to remove my wet bikini and replace it with dry underwear.

After a day or two in the remote Bolivian wilderness you get used to the fact that there are no such things as toilets at the side of the road. Most of the time there aren’t even any rocks to hide behind for those all-too-necessary toilet stops.  Your only option is to drop your trousers by the side of the jeep, regardless of being in full view of anyone who may come along. 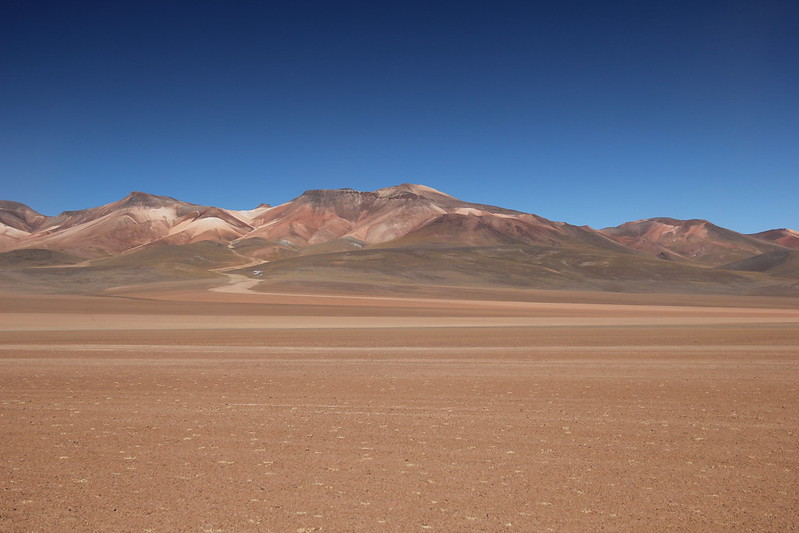 It actually becomes strangely liberating after a while, and likewise when I was getting dressed after the hot spring bath, I found myself more concerned about dropping my clothes on the floor than I was about dropping my pants.

Whilst I was fully aware how cold it was outside the jeep and how deceptive those rich blue skies could be, Stu and I decided (perhaps not so wisely in retrospect) that we’d hang out wet clothes outside the open windows of our vehicle, in an attempt to dry them on our way to the hostel that afternoon.  The sun was out, our jeep was travelling at a reasonable speed; we were convinced our clothes would be dry in no time at all.

However after a while we noticed that our wet clothes had stopped flapping in the wind.  Feeling rather puzzled by this fact we opened the window a little further and stretched out our hands to retrieve them.

Turns out the outside temperature was a lot colder than we’d realised.

Whilst we were busy trying to shake our swimwear back into life inside the jeep, the others were busy finding this sidesplittingly hilarious.  I totally think we made our driver’s day. 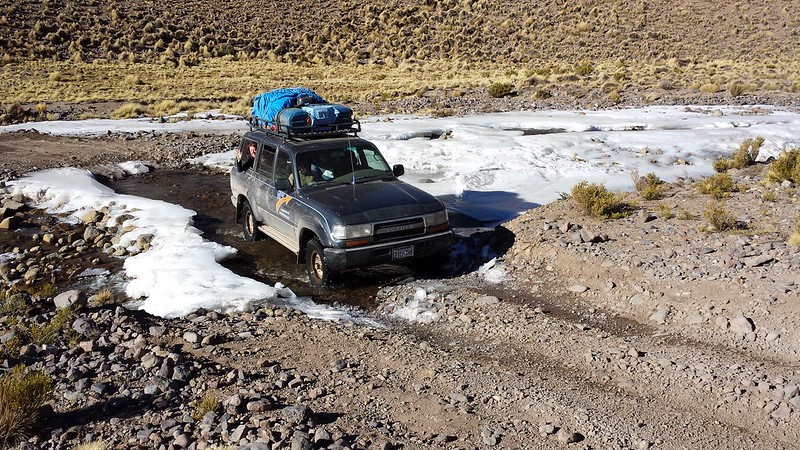 A certain Hostal Marcelo (so noted by the rather primitive sign on the building wall) provided our accommodation on the second night of our Salt Flats tour, and when we arrived there we were pleasantly surprised to find a shop on site, fully-stocked with wine and beer and cheesy corn snacks.

When the sun sets out in the sparse Bolivian desert, the temperatures plummet drastically and alcohol becomes a necessary evil to warm your blood (albeit temporarily) until you can get into bed and snuggle up to your boyfriend underneath multiple layers of warm alpaca wool blankets.

I have to admit that sharing a (small) single bed was not the most comfortable experience I’ve ever had, but at over 4000 metres above sea level in the middle of the Bolivian winter, warmth takes precedence over almost everything else.

As I lay there that night, listening to the wind whistling through the walls of our rudimentary concrete accommodation block, I couldn’t wait to wake up the following morning and discover what day three had in store for us. 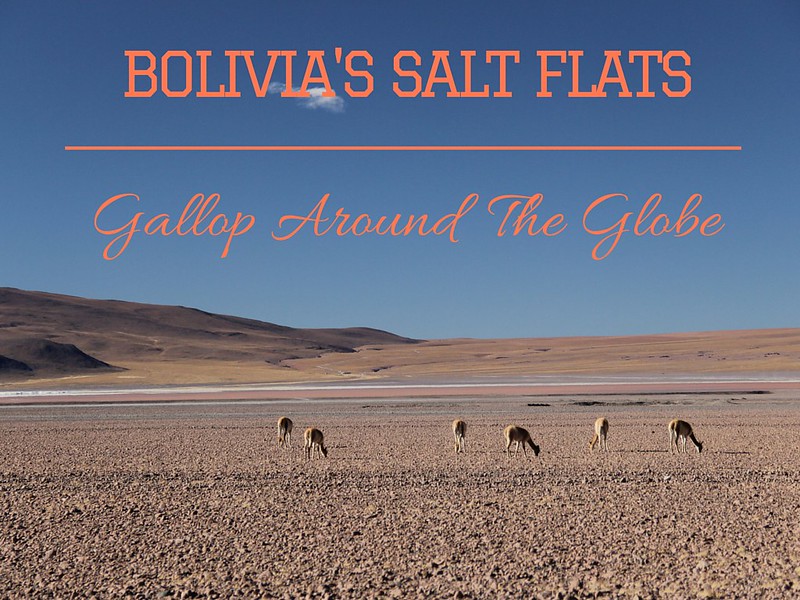 Stay tuned for part three of this four-part series next week! 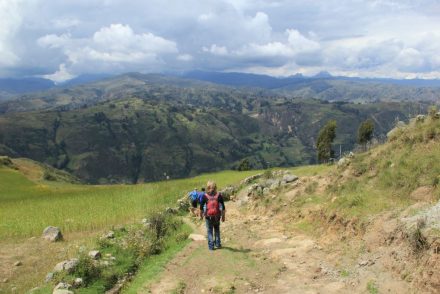 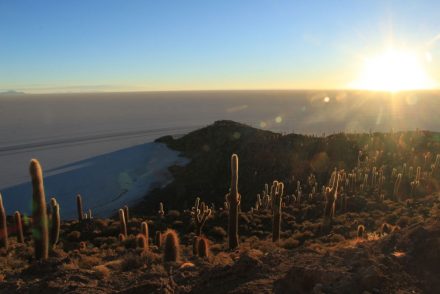 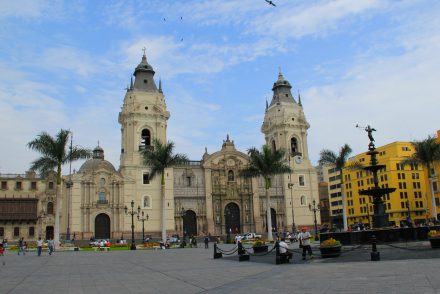 Learning to Love Lima: My First Impressions of the City 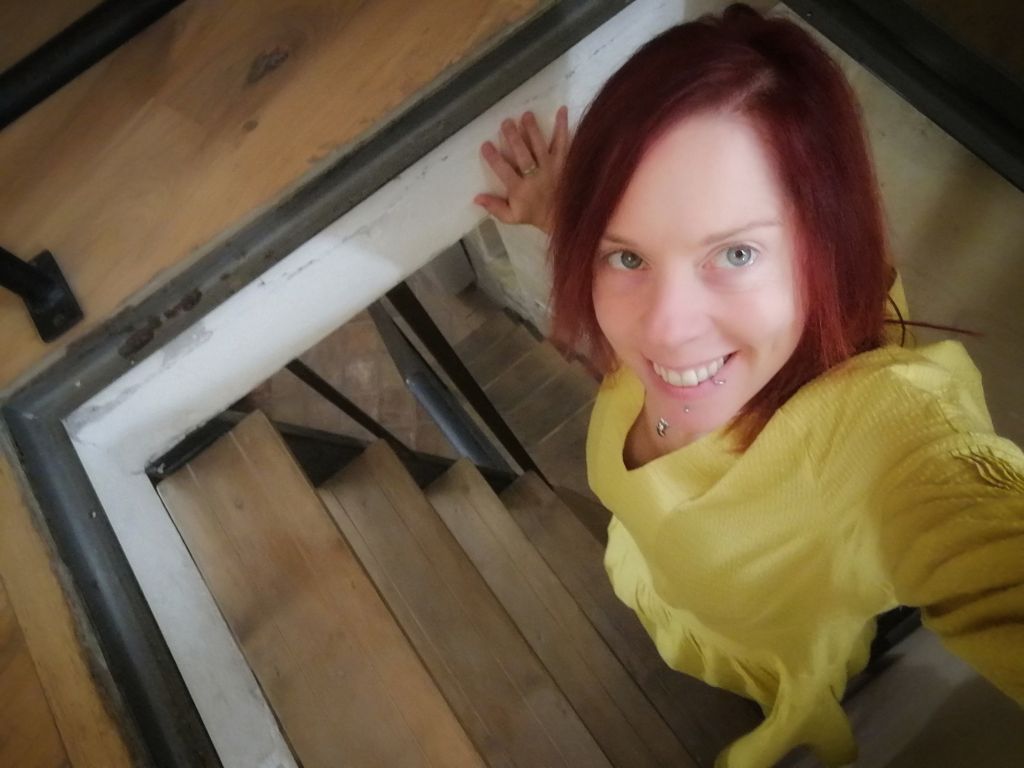