Standing at 771 metres tall, Catarata de Gocta is ‘unofficially‘ the fifth highest free-leaping waterfall in the world (there is some dispute online as to where it officially ranks), only falling behind the likes of Angel (Venezuela), Tugela (South Africa), and Utigordsfoss, and Mongefoss (both in Norway).

Yet this towering cascade of water, which is fed from the Peruvian Andes and flows into the Rio Cocahuayco, somehow escaped notice of Peruvian government, satellite images, and international explorers until 2005. Following an expedition to the falls, German engineer Stefan Ziemendorff made a request for Catarata de Gocta to be mapped and measured. Until this point, this massive waterfall was known only to locals in and around the Chachapoyas region in Peru.

Having been so impressed with our tour to Kuélap the day beforehand, we immediately booked ourselves on an organised hike to the falls. Unfortunately there was no English-speaking guide available as they were both out on other tours, but we figured there probably wasn’t much a guide could tell us about Gocta that we couldn’t find out online, and as it was a clearly marked track we’d be following, there would be no need for directions either.

What we hadn’t anticipated was how much of a chore it would be to explain that yes we’d managed to pre-order our lunch in the restaurant, and no, we didn’t have to pay the entrance fee because that was included in the price of the tour we’d booked through Chachapoyas Backpackers. Fortunately Kate came to the rescue, a girl who’d been born in Venezuela and had moved to the U.S at some point in her childhood, so had therefore been brought up speaking both Spanish and English. She kindly helped us to clear up any confusion with the guide, and acted as our translator along the trail.

When we arrived at the location from where we’d begin our hike, it was a beautiful, warm, sunny morning, and I felt glad that I’d decided to wear shorts.  However I must admit that my attire choice was also a result of a conversation I’d overheard at the hostel on the day prior to our Gocta trek.  A couple of guys were recounting their experiences of the hike, and it was mentioned that the path was extremely muddy and littered with donkey feces.

I figured that if I wore shorts, it would be a whole lot easier to wash my legs rather than my trousers.   I’d also packed my waterproof jacket, it still being the rainy season ‘ n’ all.  Little did I know at the time just how wise a decision that would turn out to be.

The skies started clouding over almost as soon as we set off, cooling the air and dulling the otherwise stunning landscapes.  However, we still continued to wear our sunglasses on our heads, optimistic that the cloud would roll out just as quickly as it had rolled in. 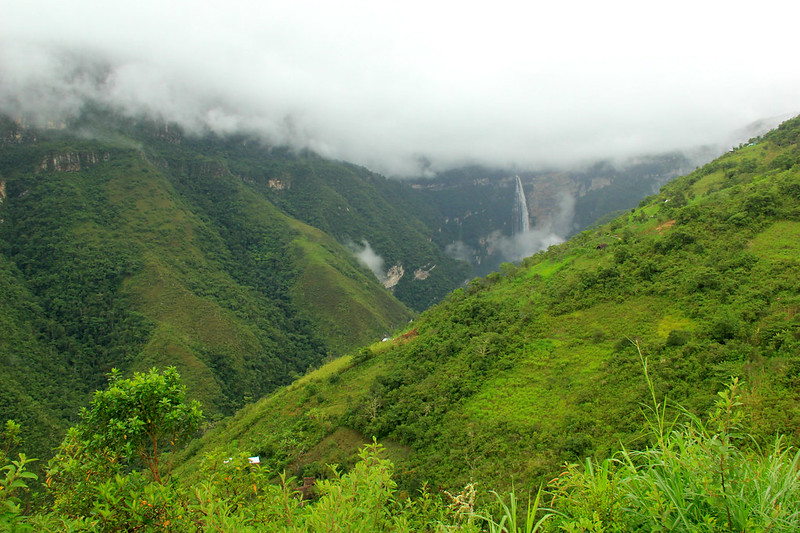 Despite the worsening weather conditions, we still got excited when we caught our first glimpse of the spectacular falls, tumbling down over a sheer rock face covered in dense green vegetation, and we retained our energy and enthusiasm as we climbed the rough stone steps, treading carefully so as to avoid the little ‘presents’ that the donkeys had left behind (yep, the guys at the hostel had been right thus far). 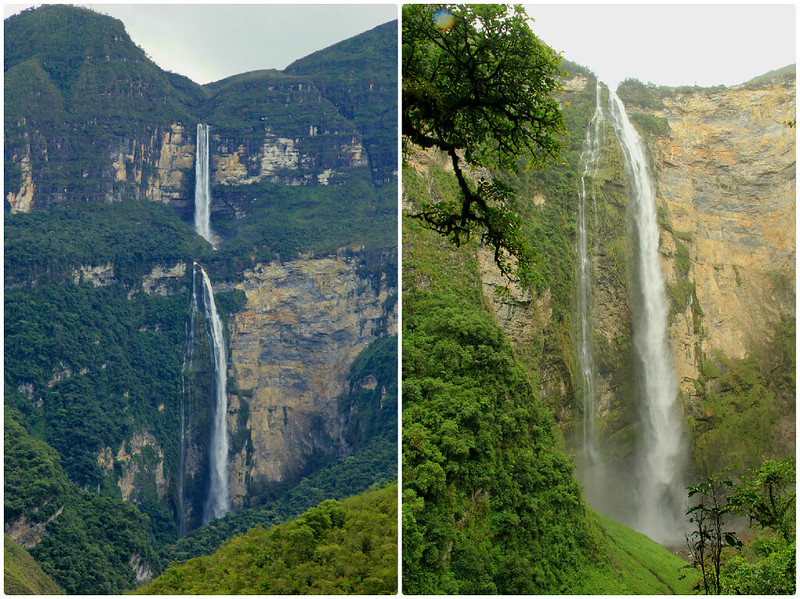 Things got interesting when it started to rain.  At first it was just light rain, the kind where you think twice about putting up an umbrella or donning a jacket, and we were still convinced then that it was a shower that would soon blow over – just as the cloud would do.

Well, the weather had other ideas.

Clearly it had decided that the humungous quantities of water that were tumbling down the rock face in front of us just weren’t enough.  The ‘light shower’ swiftly turned into a rather more heavy one, which in turn soon became a torrential downpour.  The path (which consisted of continuous ups and downs) grew slippery and water-logged.

Although I had sensibly packed my waterproof jacket, I had no waterproof cover for my rucksack (which contained my precious digital SLR camera).  The only way I could protect my rucksack was to wear my jacket over the top of it, and bearing in mind that my jacket is just the right size to fit me (with a few thin layers underneath), wearing it over the top of my rucksack meant that I couldn’t zip it up.  Furthermore, the humidity on the trail, coupled with the level of energy expended by the hiking itself, meant that it was far too hot to even put my arms in the jacket.  So, I ended up wearing it much like a cape, pulling the hood tight to secure it.  I wasn’t going to win any fashion contests, but at that point I really didn’t care.

My precious digital SLR therefore barely saw the light of day for the entire duration of the trek (electrical equipment + water = very bad results), so the majority of the photos I have were taken on my mobile phone – which is apparently supposed to be waterproof. I guess the one benefit of the amount of rain that fell during the 2-hour hike to the base of the falls, was that I happily stood at the foot of Catarata de Gocta to pose for the obligatory photograph.  When you’re already soaked to the bone, you don’t really care just how much more water is thrown at you.  It’s actually quite liberating getting past the point of caring. 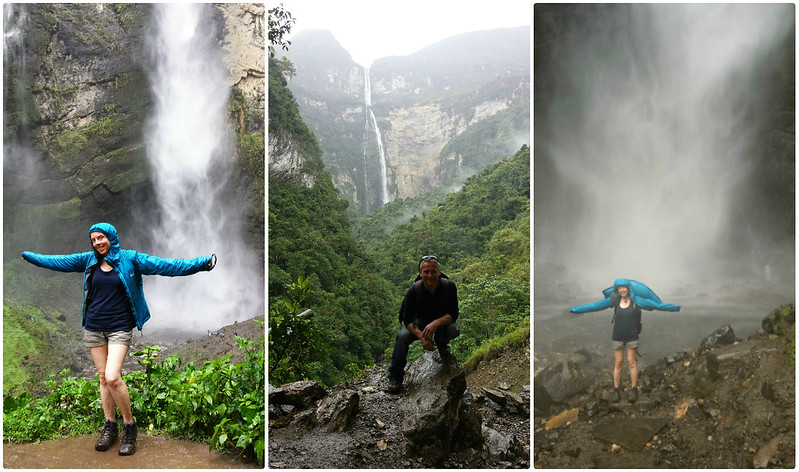 The route back really tested my strength and endurance. Not only had this been the first real exercise (aside from strolling around towns and cities and climbing the odd set of steps up to a tourist attraction) we’d done since leaving home, but the track seemed to consist solely of relatively steep ascents and descents (interspersed with very short flat sections), which were made all the more challenging as a result of the incessant rain.

Pretty soon, it was impossible to tell what colour my walking boots were beneath the thick layer of mud, and my legs were a painting of brown freckles. My jacket, despite being waterproof, was wet inside and out. But that may have something to do with the fact that it was unzipped the whole time.

Half an hour before arriving back at the starting point and sitting down to a well-earned lunch, the rain stopped, the sky began to brighten, and we said goodbye to the muddy, water-logged track we’d fought with up to this point. Ahead was the paved pathway we’d begun our journey on, and houses came back into view.

In spite of the fact that – even after a hearty meal of warming quinoa soup and a tasty tortilla de verduras (vegetable omelette) – I could not shake the chill I felt right through to my bones, I’d actually really enjoyed myself. Yes, I may not have been able to get any amazing photographs, but I felt both tired and revitalised from all the exercise, and I’d successfully managed to avoid slipping over and landing in the lovely mix of mud and donkey poo. A major bonus as far as I’m concerned.

When we finally walked through the doors of the hostel at around 6:30pm, José took one look at us, and managed to appear shocked, puzzled and amused – all at the same time. He couldn’t understand why or how we’d returned in a soaking wet and mud-caked state, for it had been a beautiful sunny day there in Chachapoyas. All day.

Have you ever completed a hike in the midst of a rain or thunderstorm? How did you cope? Did it put a dampener (excuse the pun!) on the whole experience?

Huancavelica: The Charms of a Lesser-visited Peruvian Mountain Town

A Rare Review: The Welcoming Refuge of Mama Simona