Following a 6-hour journey on a cramped minibus (albeit through some beautiful mountain scenery), it was lovely to arrive into Chachapoyas with our accommodation already booked for us (thanks to the incredibly kind folk at La Casa de Seizo in Moyobamba).

Our hostel was run by a young Peruvian husband and wife (apparently they’re not actually married but as they’ve been together for so long he calls her his wife), who immediately made us feel at home. They say people choose to buy products based on their experience with the people who are selling them, and this was so true with our tour to Kuélap. José was friendly, accommodating, helpful and laid back and we immediately liked him, so when he mentioned that there was a tour running to Kuélap (somewhere I’d already decided would definitely be on my itinerary whilst in Chachapoyas) the next day with an English-speaking guide, we felt no need to shop around. 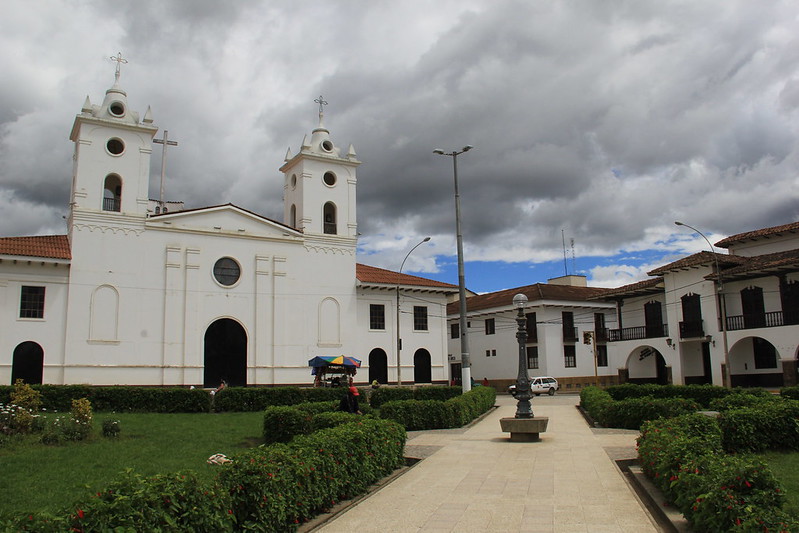 We woke up early and grabbed some fresh fruit from the market to eat in the hostel kitchen before José walked us to the Plaza de Armas, waited with us until the correct tour bus arrived and then ensured we got on it before leaving.

It was here we met Jeff, a super-chilled Australian guy who was on our bus the day before from Moyobamba (although he’d travelled all the way from Tarapoto), and Anika, a quirky Australian girl who’d been working in Chiclayo for the past 3 months as a Chiropractor, along with an American couple, a German couple, a Peruvian couple, and a pair of Peruvian girls who insisted on photographing each other in front of every significant remnant we encountered at the site.

Our guide was Fernando, a slightly-built gentleman with a bald head (a rarity over here in Peru), who did an excellent job at providing us with thorough and detailed (yet easily absorbed and understood) information about Kuélap, a fabulous, ruined citadel city in the mountains south west of Chachapoyas.

Constructed between AD 500 and 1493 (therefore pre-dating the Incas) by the Chachapoyans (known as the Cloud People), and rediscovered in 1843, Kuélap sits at 3100 metres above sea level and is situated on a ridge overlooking the Utcubamba Valley in northern Peru. Due to its sheer size (the structure is almost 600 metres in length and its walls rise up to 19 metres in height) and elevation, Kuélap’s construction required a monumental amount of effort that rivals other archeological sites in the Americas, including the world renowned Machu Picchu.

Yet, whilst Machu Picchu sees approximately 2500 visitors per day, Kuélap receives just 24,000 per year.  When you break these figures down you realise that visitors to Kuélap equal just 2.63% of the total number of people who set foot through the gates of Machu Picchu. 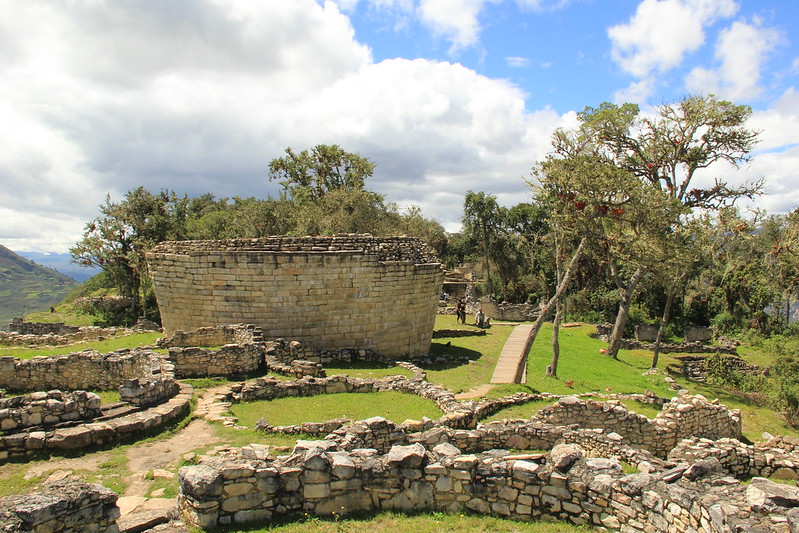 Kuélap is located in an isolated position, a 2-3 hour drive from Chachapoyas, along rough, unpaved roads that meander their way up into the mountains.  Where the road ends, a small path continues uphill in order to reach the base of the ruins.  Donkeys decorated with colourful saddles sit at the base of the pathway, which weaves its way further up towards the clouds amidst colourful plants and flowers.

When I reached the top, it was the view that initially struck me: stunning mountain peaks in every direction, and Kuélap crowns the highest of them all. 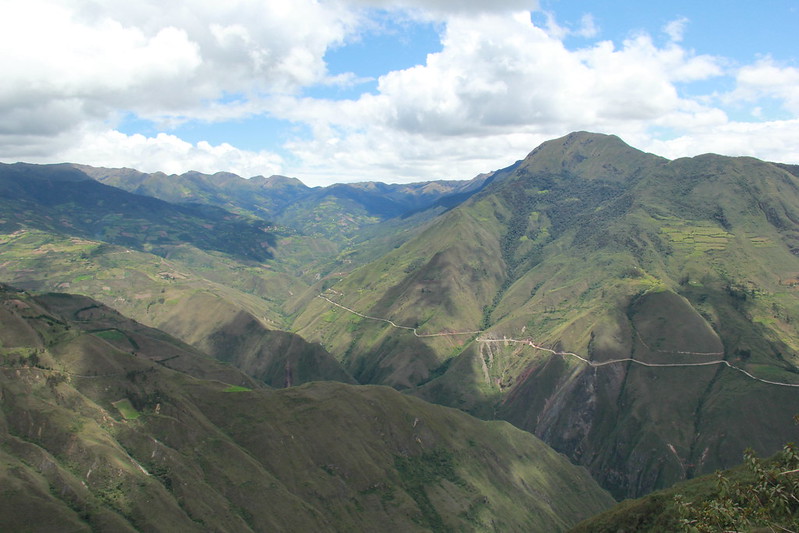 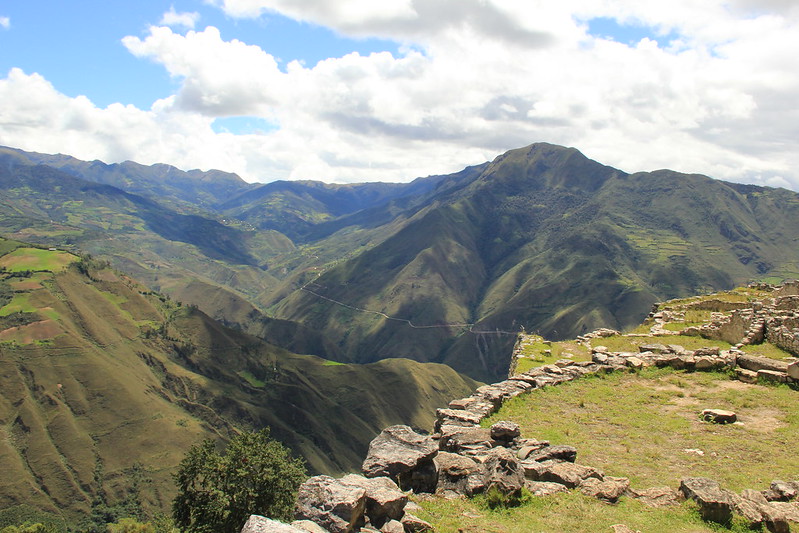 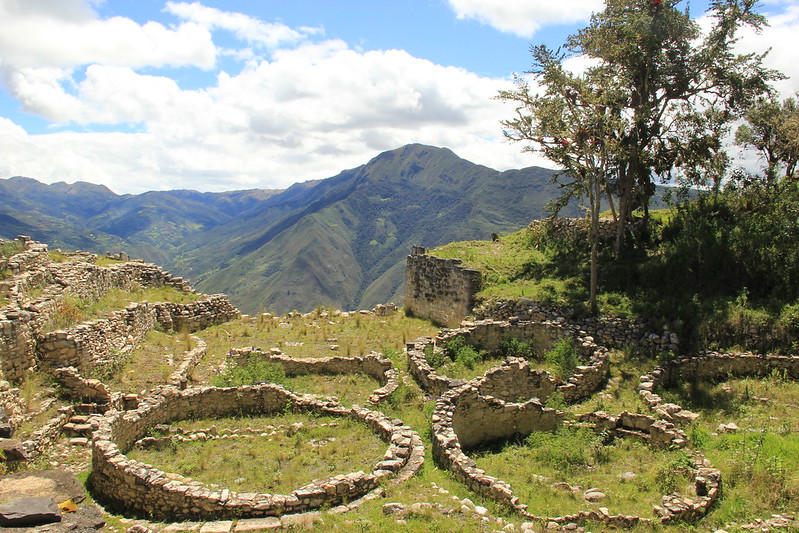 As we made our way towards the main entrance gate, we passed the impressive exterior wall, which remains – to a greater or lesser extent – still intact, hundreds of years after its initial construction. 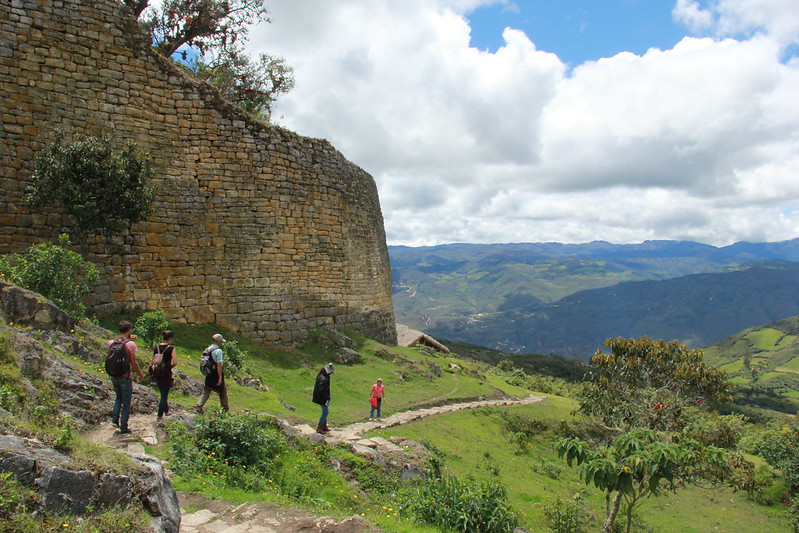 In front of us the entrance gate towered above us, its walls propped up by two enormous lengths of wood. Beyond that, the narrow corridor that stretched out ahead of us contained stone steps overgrown with vegetation, and lead us up towards the inner wall – Kuélap’s second line of defence. 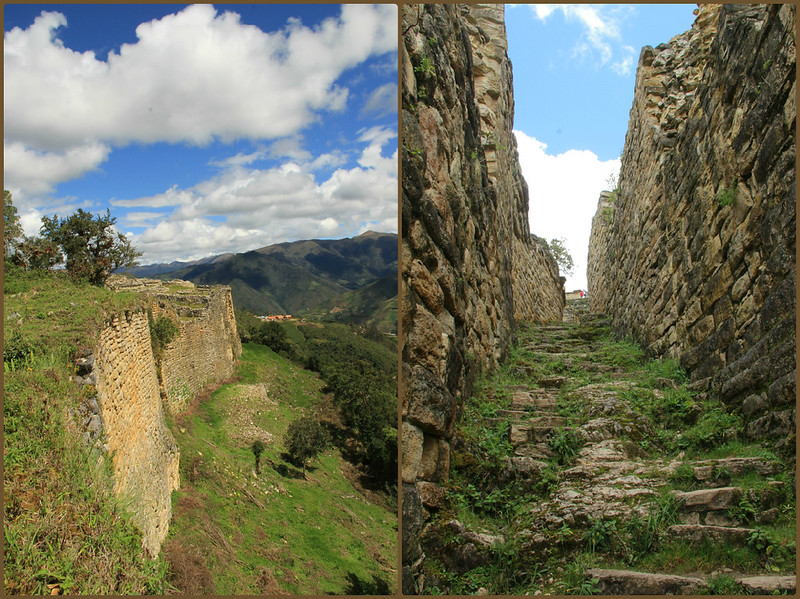 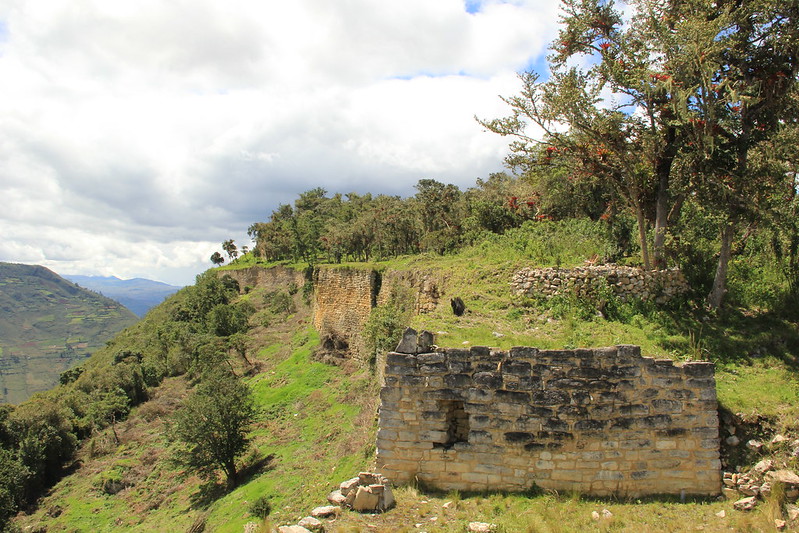 The site is mostly unrestored (with the exception of one of the round stone houses that has more than likely been featured on any photographs you may have seen of the ruined city), and the land upon which it sits is overgrown with old trees laden with bromeliad.  Even the remains of individual structures are partly covered in sub-tropical vegetation and shrubs.  Amongst other flowers that catch your eye as you wander around, orchids grow within the grounds, and llamas roam freely amid the ancient buildings – of which there are approximately 400. 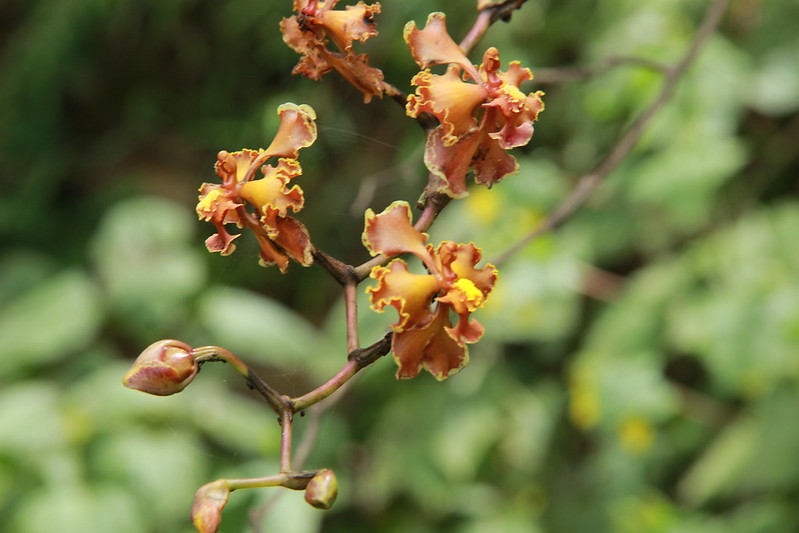 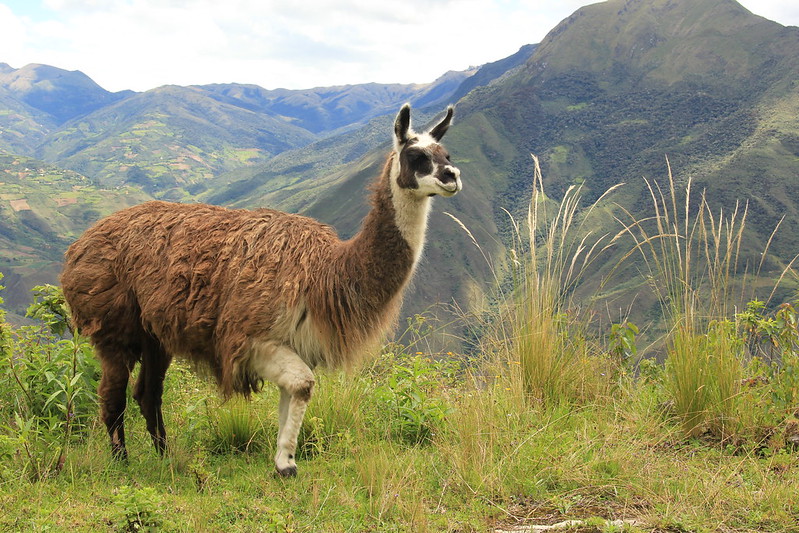 Most of the 400 individual structures within the grounds are circular in shape, and many were inhabited by the estimated 3000 people who once lived there, people who worked as famers, builders and artisans.

There are a few buildings, however that stand out from the others.  Some have intricate geometric patterns (made from flat stones) built into their exterior walls, and were likely inhabited by shamans or holy men. 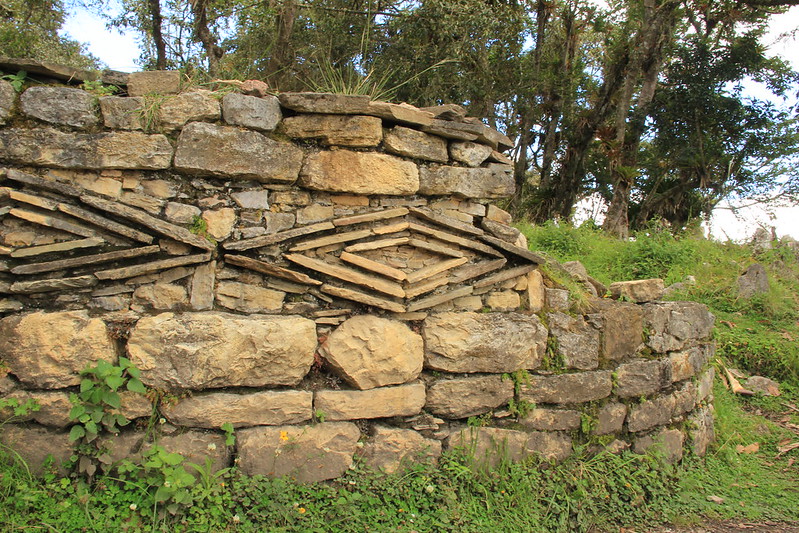 Some have intriguing carvings on individual stones, depicting mythological animals or curious faces.  As very little is known about Kuélap, the significance of many of these remains a mystery.

At the southern end of the fortress sits a prominent structure, which – due to its interesting shape  (outside it’s narrower at the base but the void inside is bottle-shaped) – has also raised several questions surrounding its purpose.  Our guide advised us that historians have concluded that it was either used as a grain store, a jail, or a lunar temple.

However, it was also mentioned that human remains have been found within the structure, which surely invalidates its use as a grain store? 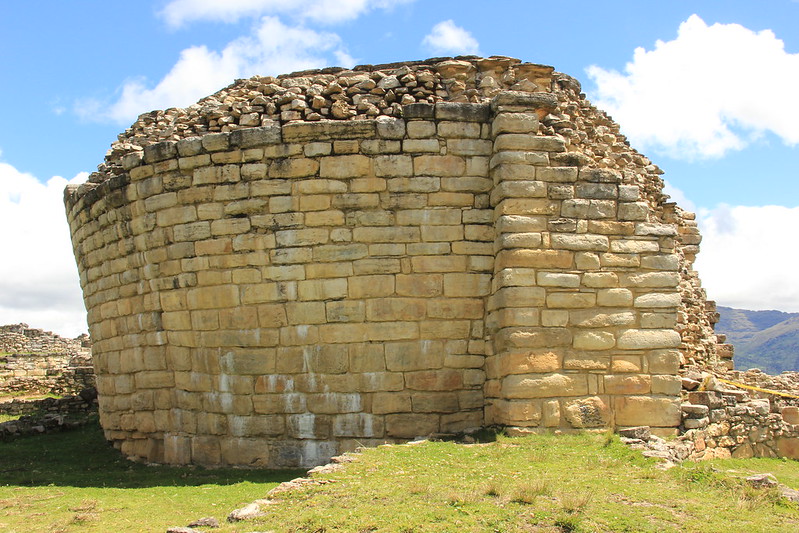 Other structures we encountered were also containers for human remains.  We shone a torch through the cracks in the walls of a couple, to find human bones inside the wall itself. 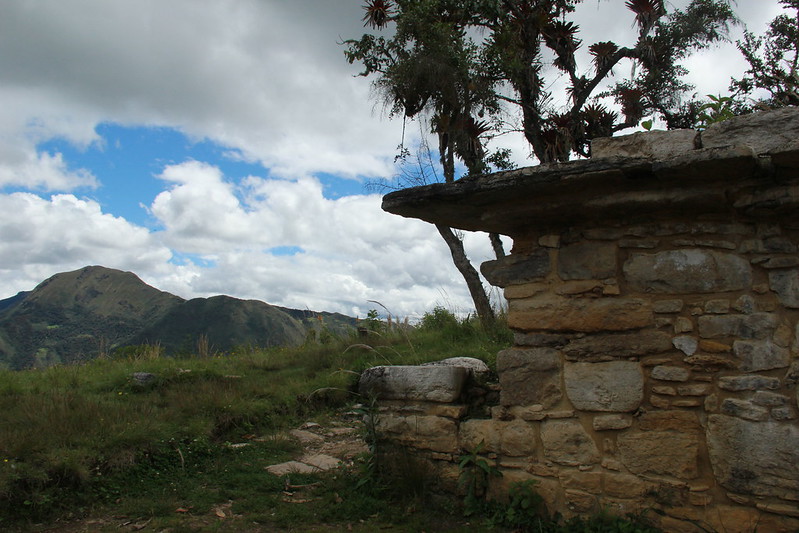 The mystery surrounding Kuélap – along with the bones within the walls, curious engravings, and structures overgrown with invasive vegetation – only enhanced my enjoyment of a place that truly feels ‘off the beaten track’.

Whether or not you’re interested in the history or archeology of the place, come here for the 360 degree panoramic views of the northern Peruvian countryside, come here to discover relatively unexplored territory, to experience your first wild llama encounter, or to photograph the colourful and unusual flora. 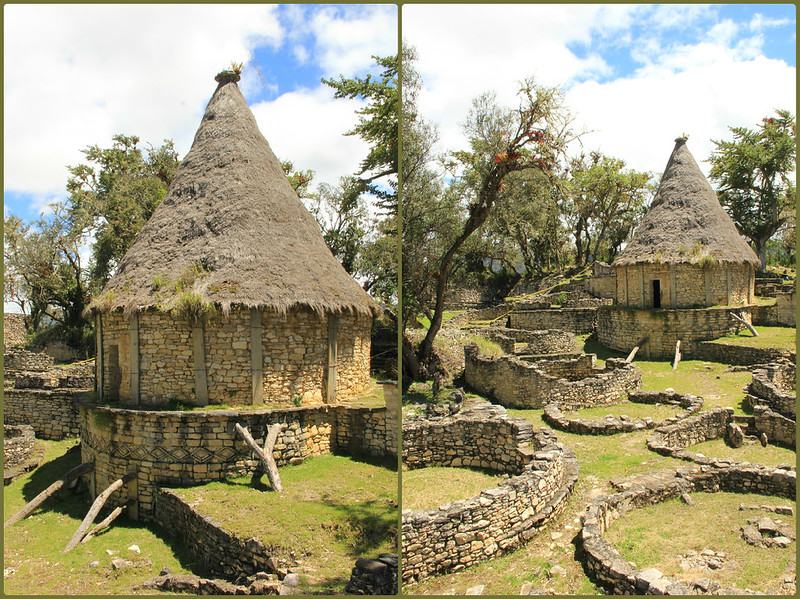 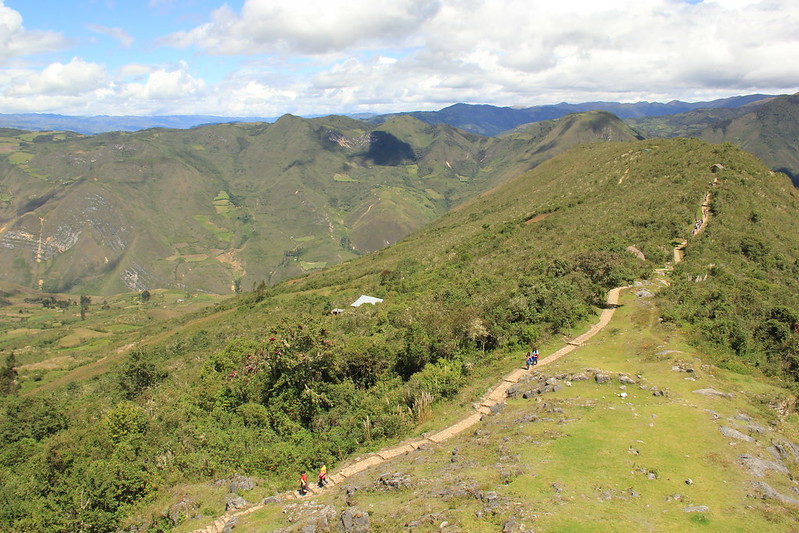 Having also been to Machu Picchu before finishing this article, I’m so glad I had the opportunity to visit Kuélap first.

We booked through Chachapoyas Backpackers for a cost of 60 soles (£12.85) The tour ran from 8:30am-6pm and included all transportation, an English-speaking guide and the entrance fee to Kuélap. Lunch was not included but was available from 10 soles (£2.14) at a restaurant in a nearby village at which you stop as part of the tour. Lunch is not until 3pm so make sure you have a large breakfast or bring some food with you!

Cons: Wifi!  Didn’t work anywhere in the hostel, but in the hostel’s defence the wifi in Chachapoyas was in the running for the worst in Peru!

How to book: We had our booking made for us by the lovely folk at La Casa de Seizo, but it is possible to book through booking.com

Pros: Relaxed atmosphere (we used their wifi for 5 hours and only bought lunch and 2 drinks), good choice of drinks (the chocolaté con ron is lush), and the best wifi in town (although it’s still very slow at best)

Cons: They don’s serve full meals here, but then again we didn’t find anywhere in Chachapoyas that did!

Pros: The only decent place to drink in Chachapoyas…tastefully decorated rooms and large courtyard, extensive menu of drinks from La Selva (the jungle).

Cons: Difficult to find.  The address in the Lonely Planet is wrong; ask a local.

Orchids and Hummingbirds: The Wonders of Waqanki