Following our mild carbon monoxide poisoning scare the night before, we woke up giddy with nothing but excitement, for this was the final day of our 4-day tour through Bolivia’s Salt Flats.  This was the day that we’d watch the sun rise over the Salar de Uyuni from the highest point on Isla Incahuasi, and then put all those crazy ideas for perspective-skewed photographs into practice. 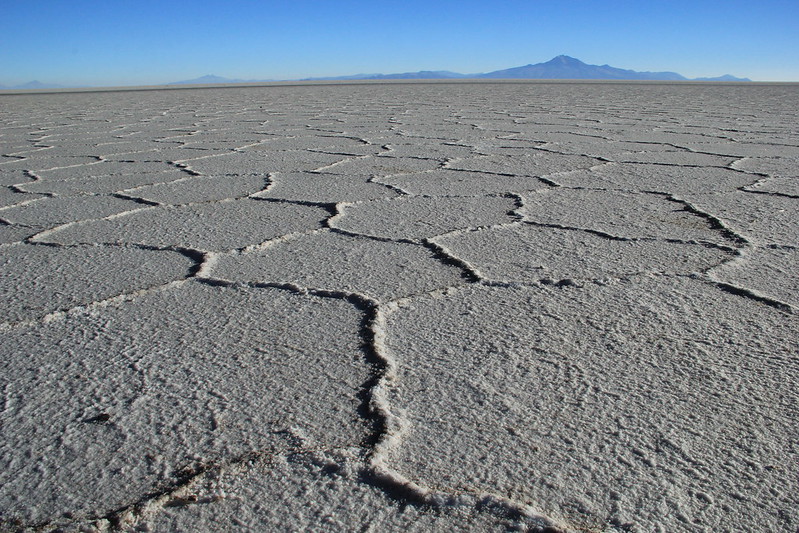 The World’s Largest Salt Flat sits at an altitude of 3653 metres above sea level and covers an area of 12,106 square kilometres.  Like many of the amazing expanses of water we’d seen during our 4-day tour, that’s exactly how the Salar de Uyuni started life – as a lake (or series of lakes).  However over time the fierce sun evaporated the majority of the water, leaving only puddles behind and a huge amount of salt deposits.

The Salar also contains over half the world’s lithium reserves (currently being extracted), which – according to Lonely Planet – should be enough to fuel Bolivia’s economy (and your iPod) for the next 100 years. 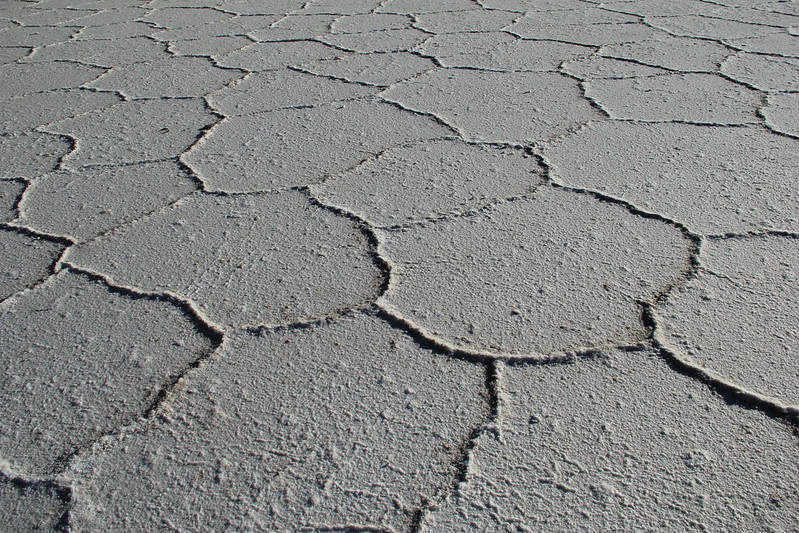 It was still dark when we set off in the jeep that morning, a hazy sun struggling to rise above the horizon behind us as we raced towards the base of Isla Incahuasi.  Although it’s an easy 15-minute climb to the top, there was the distraction of several thousand Trichoreus cacti to photograph along the way.  Aside from my visit to the Wari ruins just outside Ayacucho in Peru, I’ve never seen so many cacti in one place anywhere else on earth.

I was more than a little bit excited by this fact. 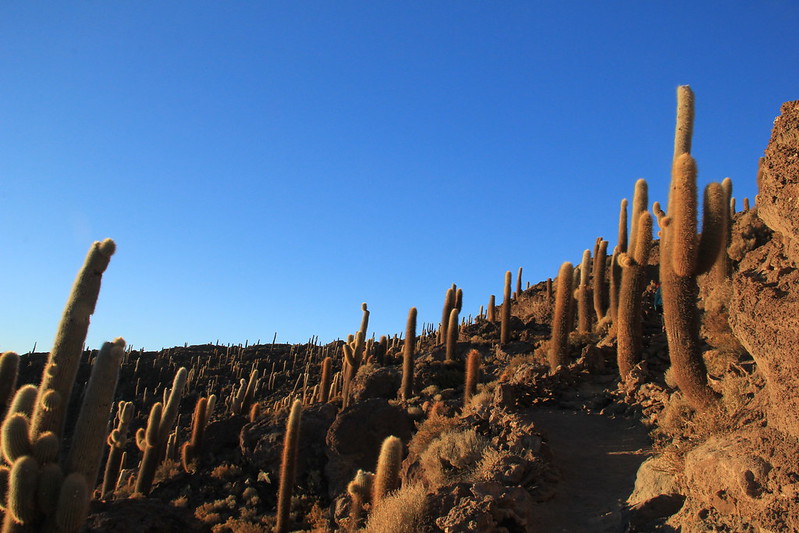 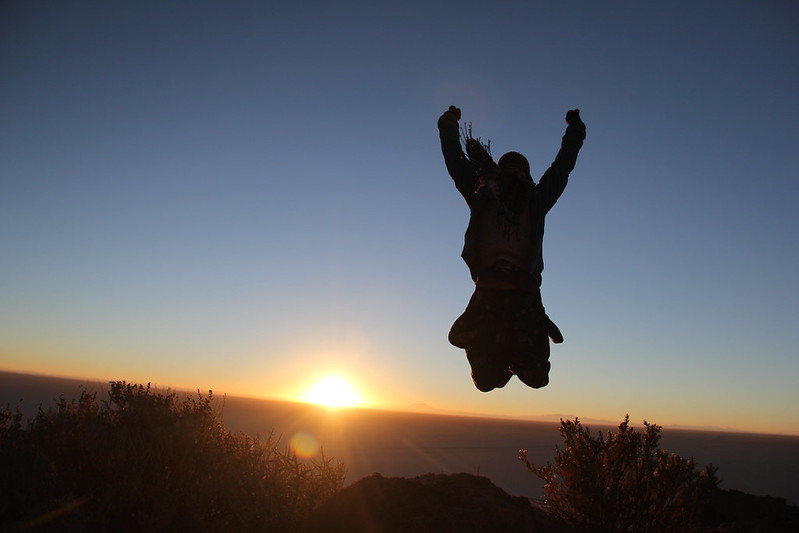 In between excitement and the sheer speed at which I completed the climb (to compensate for the number of times I stopped to photograph cacti), I failed to realise just how cold it was up there until I reached the top.  Without that red hot sphere above us to heat the air down below, I started to lose all feeling in my fingers, and my face felt like it was covered in tiny droplets of ice.

But when I gazed down upon that huge expanse of salt, the rising sun gradually lighting up the tops of those prickly pillars of awesomeness, suddenly the freezing temperatures no longer mattered.  I was staring at one of the most surreal and spectacular landscapes I’ve ever laid eyes on.

As I gazed across the horizon it was difficult to tell where the land ended and the sky began, that perfect blanket of irregular salt hexagons broken only by the tyre tracks of the odd jeep that roamed across its surface. 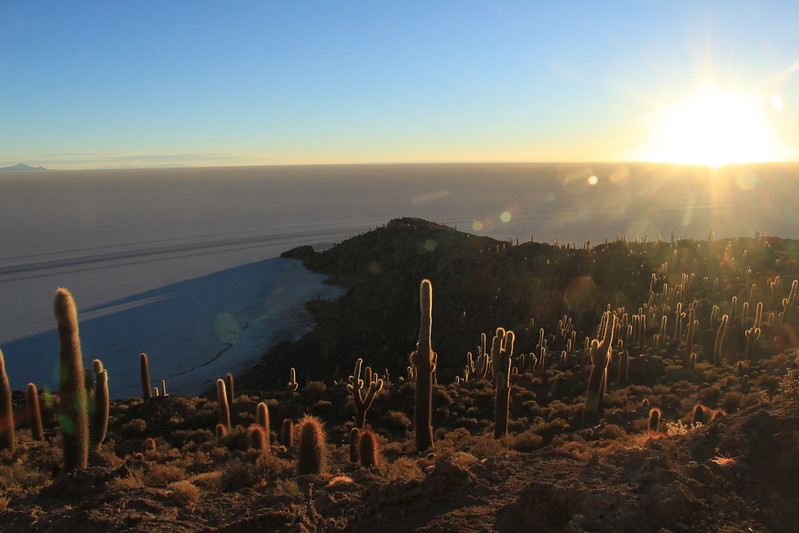 But tear my eyes away from that magnificent view, I must, as breakfast was waiting for us down at the base of Isla Incahuasi.  Generous portions of yoghurt and cereal and fresh fruit were served to us on picnic benches made out of salt, whilst we struggled to find the feeling in our fingers to pick up a spoon to eat them with.

I don’t think I’ve ever felt as cold as I did that morning in the shade of the great Isla Incahuasi.

The only part of me that wasn’t numb with cold were my feet, thanks to two pairs of merino wool socks and my amazing Keen boots (seriously the comfiest hiking boots I’ve ever worn!) 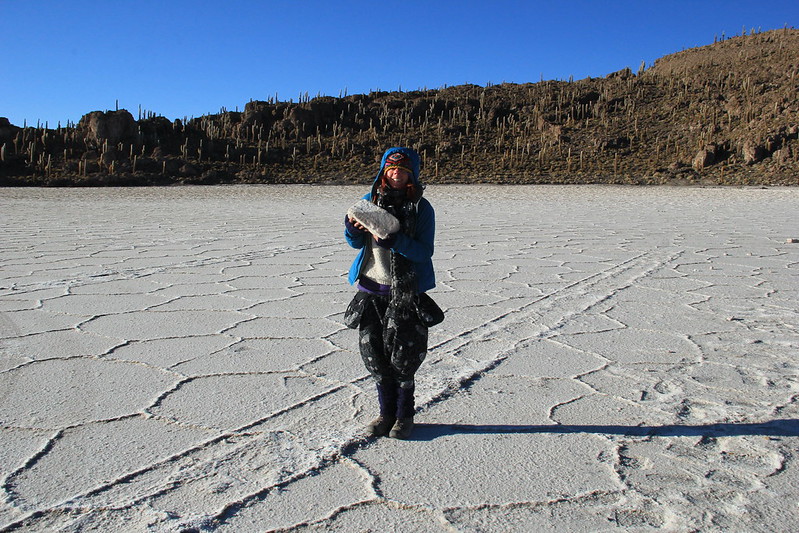 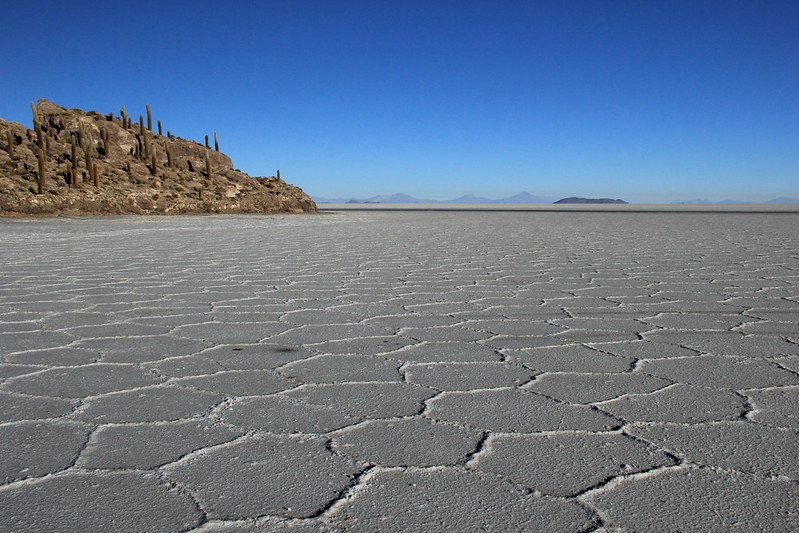 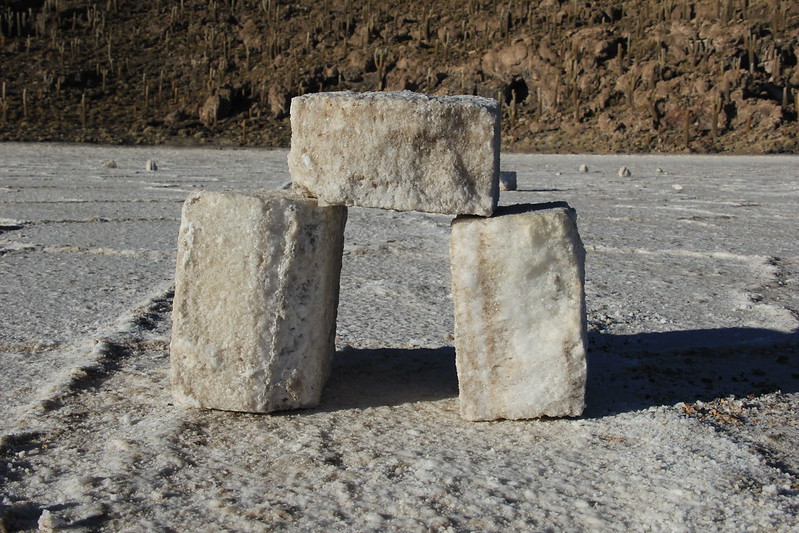 Much as I’d loved witnessing the sun rise over the largest salt flat in the world, the part of my body that felt desperately close to catching hyperthermia was very glad when we were all instructed to get back into the jeep to continue our journey across Bolivia’s Salar de Uyuni.

The next stop on our four-day adventure through Bolivia’s remote desert wilderness was the part that we’d all been waiting for, and the main reason that many people (including myself) make the journey in the first place.

I for one had never realised just how much the southwestern corner of this incredible country has to offer.  It’s not just about the salt flats; it’s about mineral-rich lakes, towering volcanos, boiling mud pools, inviting hot springs, and endemic species of plants and wildlife.   It’s about a part of the world quite unlike anywhere else on earth.

As we left Isla Incahuasi, and any forms of plant or animal life, far behind us, we began to gather our props, and prepared ourselves for the moment that our driver arrived at what he deemed to be a photo-worthy spot for our crazy perspective-skewed shots.

And what a spot it was. 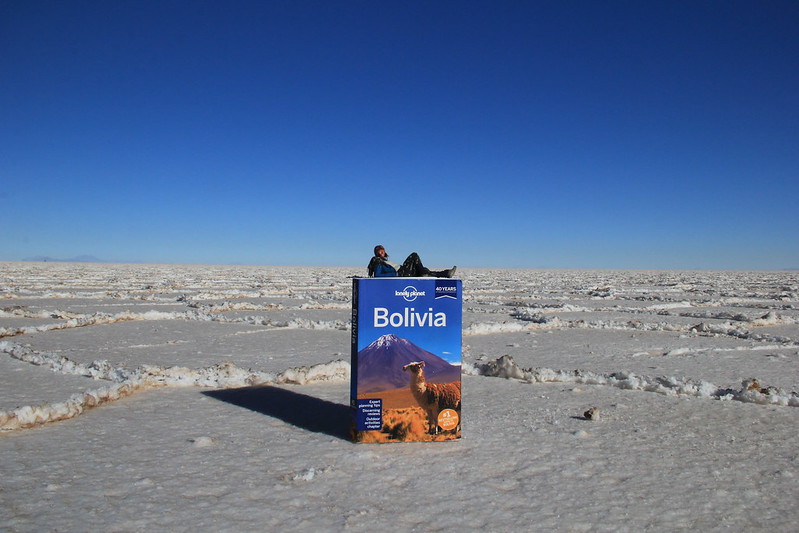 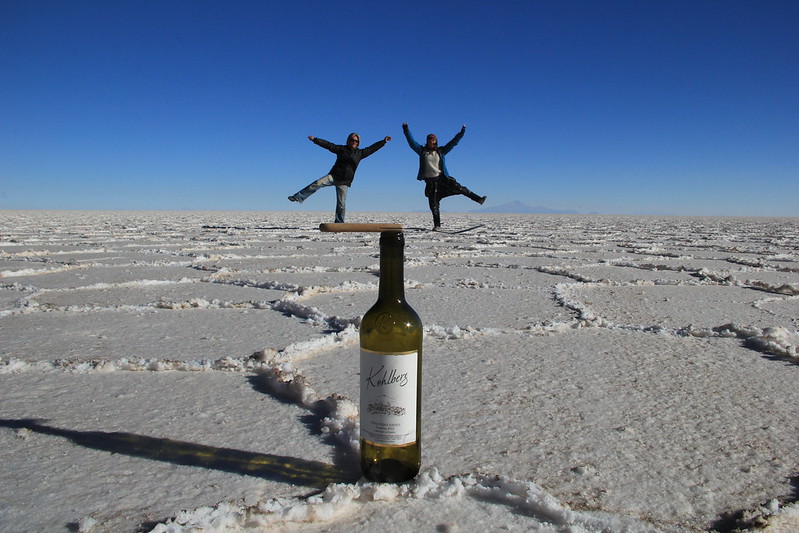 Our cook even volunteered to assist us with the reproduction of one of our photo ideas. 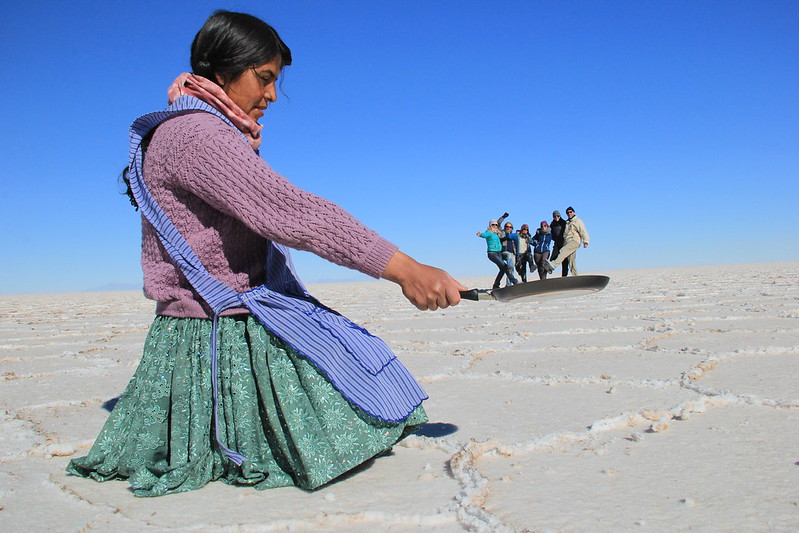 What you probably don’t realise when you see all these clever and amusing shots online, is just how much work goes on behind the scenes in order to create them. Only a few of the shots you try actually appear on camera exactly as you’d envisaged them to, yet each photograph you take requires an enormous amount of staging just to get the angles right, and to achieve the correct integration of your two (or more) subjects.

There’s people lying on the ground attempting to prop up cameras in such a way as they remain steady whilst simultaneously positioning themselves in such a way as they can see through the viewfinder of said camera.  There’s lots of balancing on one leg, jumping, arm-stretching, prop-shifting, and side-stepping whilst the photographer carefully instructs and directs you.

And no matter how excited you are about your next shot, you have to patiently help others with theirs as if they were your own. 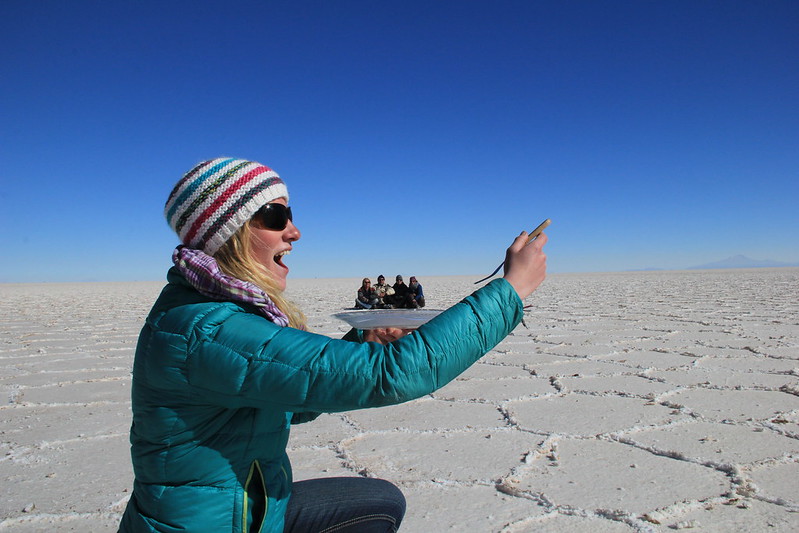 I’ve no idea how long we were given to play around on that surreal salt flat stage, but it definitely wasn’t long enough.  Nowhere near.  We were having WAY too much fun. 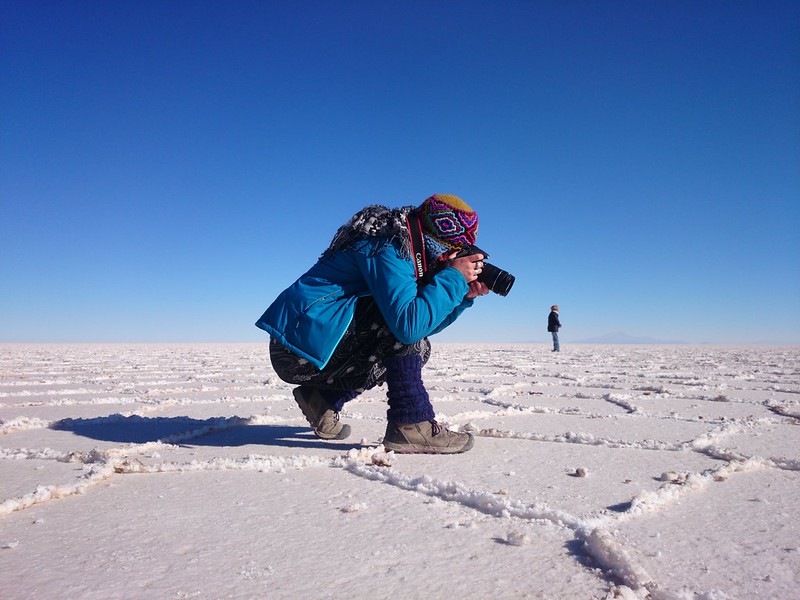 I was rather disappointed to discover that, due to road blockades just outside Uyuni (more on those, and the logistical and financial nightmares they caused us, in an upcoming post), we had to miss the cemetario de trenes (train cemetery) on our return.  But at the same time I felt a strange sense of satisfaction that our Salt Flats tour had culminated in that memorable, crazy, surreal photo experience on the salt flats themselves.

As we headed back to Uyuni I couldn’t help but smile.  A huge smile.  One almost as big as that immense Bolivian sky. 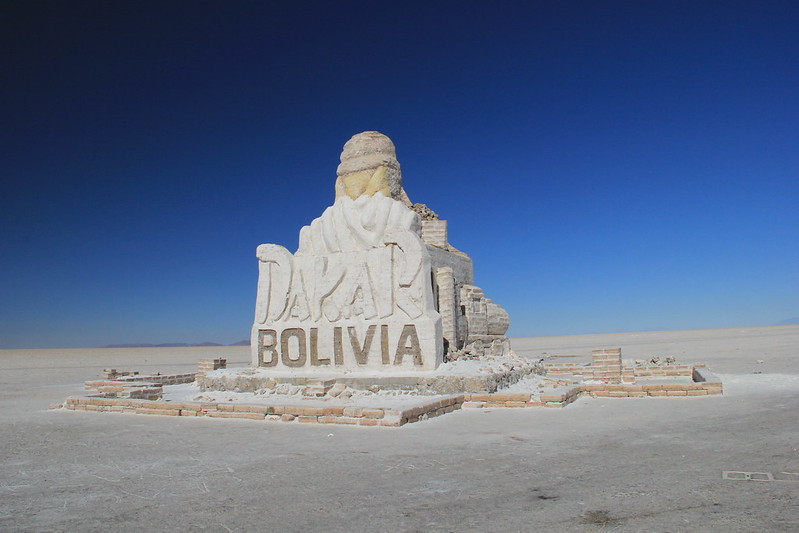