If you’re thinking of hiking the Colca Canyon independently then you’ve come to the right place!  This is part one of my three-part guide about making the journey with a four-legged friend as our only guide.

If you’ve read my previous articles on Arequipa, you’ll know that it’s the city in which I chose to spend my birthday last year.  Not only is Arequipa home to some beautiful colonial and Mudéjar architecture, fascinating historic and cultural sights and a vast array of inviting restaurants and bars, but it’s also the jumping-off point for treks to the Colca Canyon.

Arriving in the city on the 20th June, 8 days before my birthday, meant that we’d have time to spend a few days hiking through the world’s second-deepest canyon before finally celebrating the anniversary of my birth with a visit to a monastery, an amazing meal, some live music and one too many mojitos (damn, I love mojitos!).

Until I read this blog post by one of my favourite travel bloggers, I wasn’t even aware it was possible to hike the Colca Canyon independently.  In fact I don’t think I’ve ever attempted a trek independently, as I’ve been too scared about getting lost, subsequently dying of hypothermia and starvation and then being eaten by vultures.

At least when I choose to take an aimless wander through a city, there are street names and landmarks to guide me, and other people to point me in the right direction.  And if all else fails I can always turn my data roaming on and find my location on a map.

Whereas the places I choose to trek are normally mountainous, isolated, and a long way away from the nearest mobile phone transmitter.

The Colca Canyon is no exception. 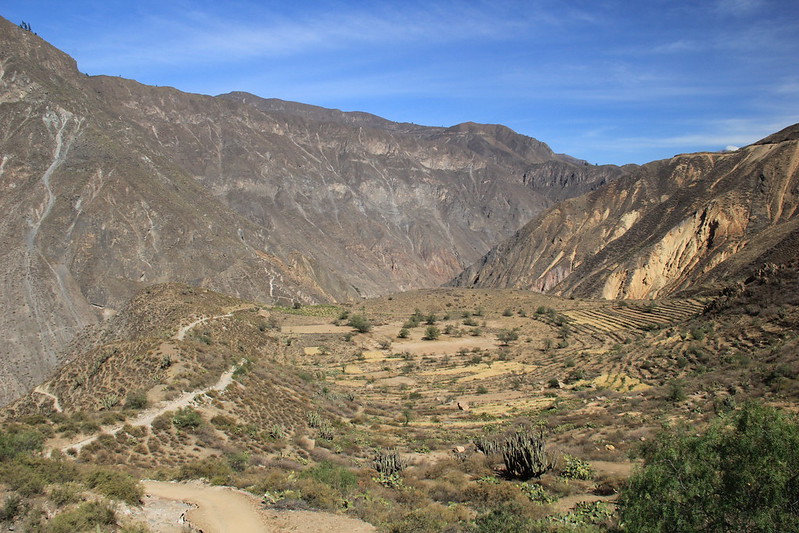 However, the incredibly helpful gentleman at Colca Trek reassured us that the paths through the Colca Canyon are all well-trodden and very clearly marked, and suggested that it was nye on impossible to get lost.

So we left the Colca Trek office with a very basic map of the Colca Canyon (the only other option was an incredibly expensive topographical map which made very little sense to me, as someone who’s never tried orienteering) and attempted to absorb all the information we’d just been given, over coffee.

Now I may have mentioned before on this blog that Stu is not quite as much (possibly a little bit of an understatement) of a fan of hiking as I am, but I managed to persuade him to spend the best part of two days doing just that, on the promise that we’d take things at his pace (which is actually faster than my own most of the time; he’s the hare, I’m the tortoise) and we’d rent mules for the steep climb back up to Cabanaconde on the second day.

That’s one thing I hate about travelling as a couple – having to compromise.  I really didn’t want to hire mules, because I felt it was both cruel and unnecessary when I knew I was perfectly capable of making the climb myself.  But my options were to hike the canyon independently and alone (which I wasn’t prepared to do for safety reasons after my experience in Ollantaytambo), to take a guided tour (which would take half the fun out of a trek that I had my heart set on doing independently) or to trek with Stu and swallow the compromise.

So, compromise reluctantly reached, we made an early start to catch the 8am local bus to Cabanaconde, from where we’d start our trek.

Once we’d left the boundaries of the Arequipan metropolis (Arequipa is the third largest city in Peru), we drove through miles upon miles of nothingness, dotted with a few tiny villages, where local children with wind-burnt faces stood at the roadside staring up at the windows of the bus as we passed them.

After approximately three hours we pulled into a town called Chivay.  Chivay is the half-way mark between Arequipa and Cabanaconde and is where many travellers choose to start their Colca Canyon trek.  Whilst it sounded like a nice enough little town (with the added value of having some hot springs nearby), we decided to continue on to Cabanaconde for this simple reason:

“Only approximately 20% of Colca Canyoners get as far as ramshackle Cabanaconde”  – Lonely Planet.

If we were going to trek the Colca Canyon independently, we wanted to ensure that our experience was as unique and authentic as possible. 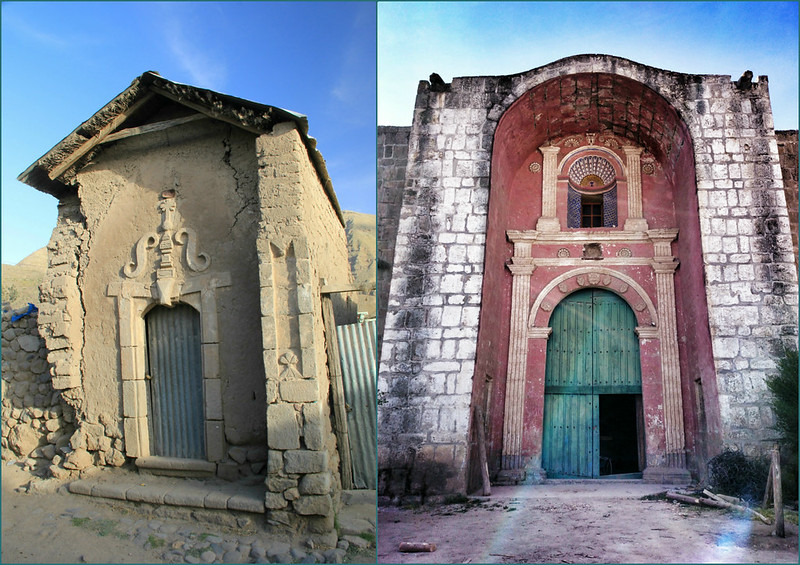 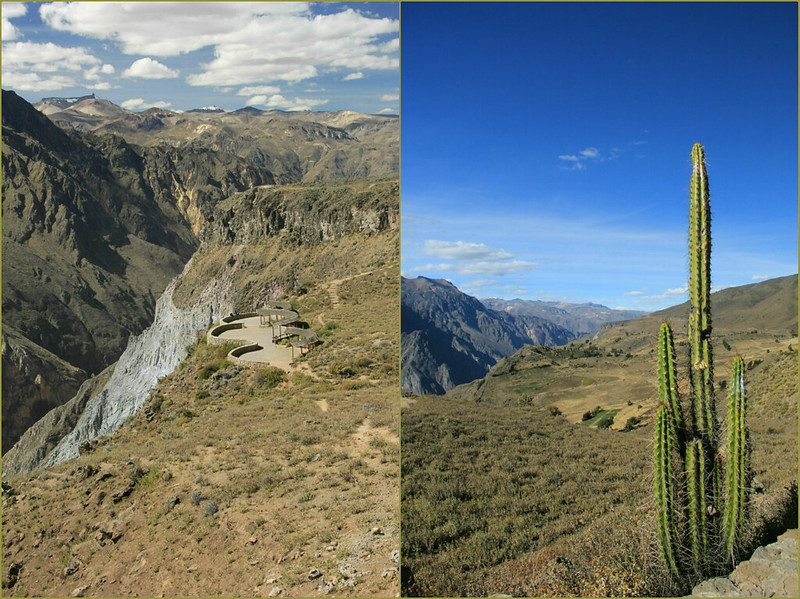 I’d heard tales of this viewing point being so crowded full of tourists that hawkers had taken to setting up market stalls up here.  Yet aside from ourselves there were just three other people, including a guy on his motorbike who’d made his way this far from the U.S.  He pointed out a couple of condors devouring a carcass not far from the road, so we took a peek through Stu’s binoculars and then looked up in awe as the pair of them soared over our heads. 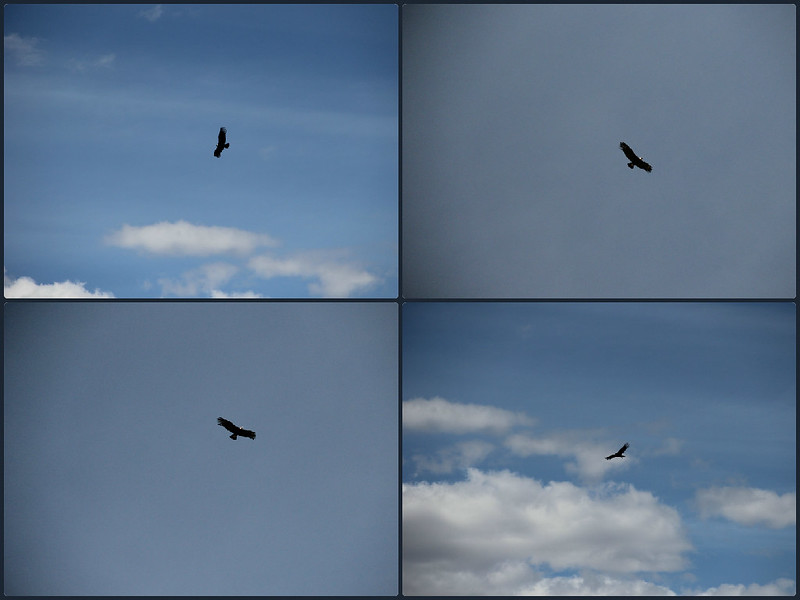 There aren’t many moments that I wish for a more powerful zoom lens on my DSLR (they’re heavy and cumbersome, and in the majority of situations my 18-135mm lens serves me just fine) but this was most definitely one of them.

Everything I loved about the Cruz del Condor viewpoint was everything that I’d heard it wouldn’t be – peaceful.  The only sounds were the gentle breeze passing through the valley and the quiet voice of the hummingbird that perched tamely on a tree literally metres from where I stood. 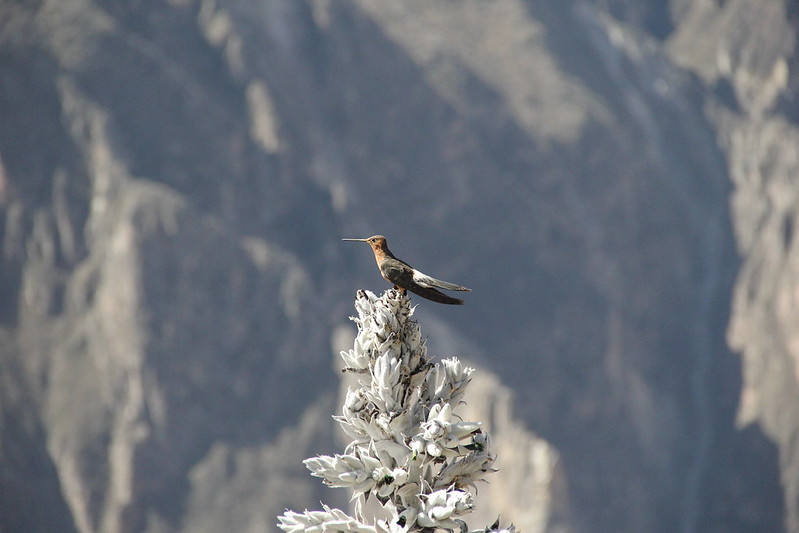 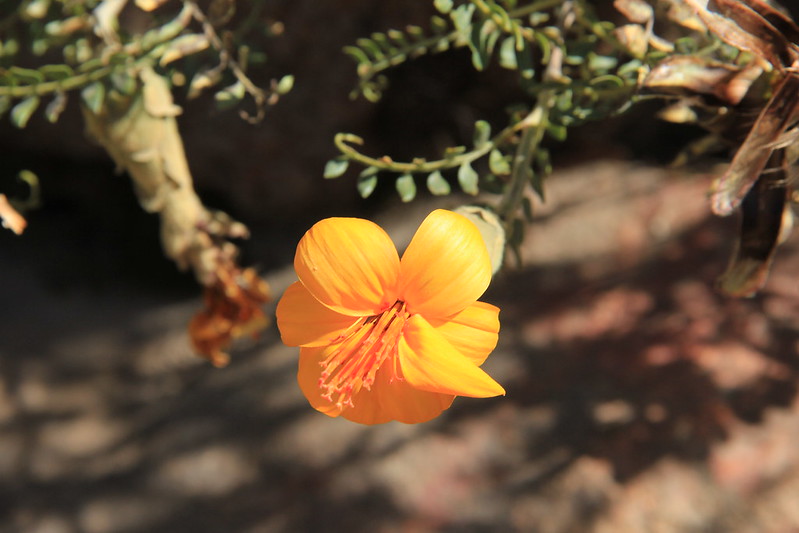 Having spent the best part of an hour soaking up the tranquility of our beautiful surroundings, we decided it was probably time to hit the road.  It was gone 2pm, the hot sun was shining down with all its strength and we’d only got half a bottle of water between us to last until Cabanaconde. 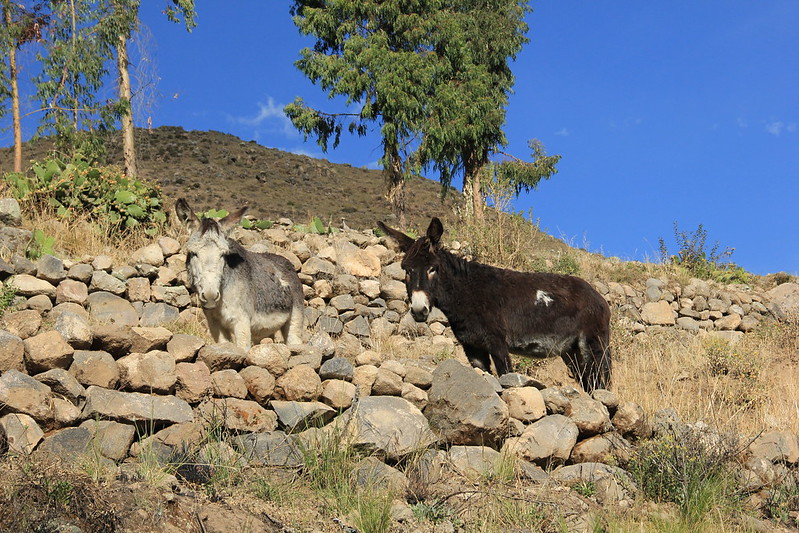 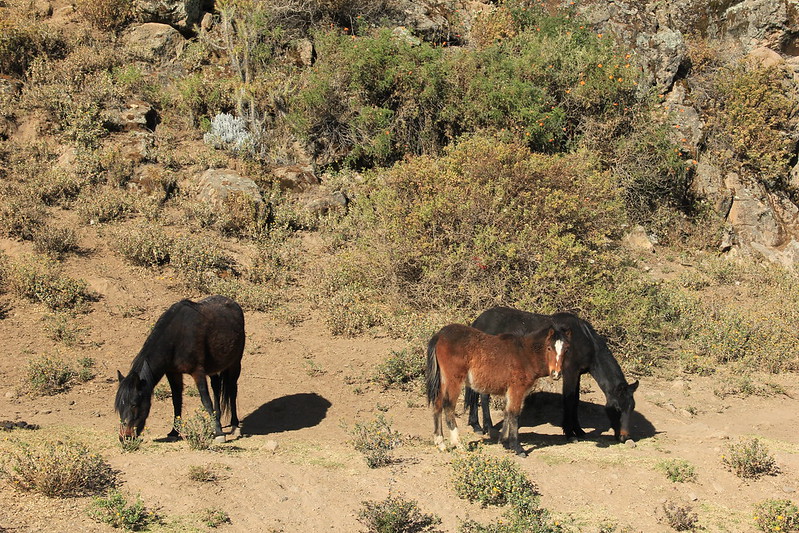 So, we began to follow the wide sweeping bends of the tarmac road as it snaked its way downhill, watched only by a couple of curious donkeys and a few grazing horses as we walked.  Around every corner we took we expected to see a sign that would indicate our increasing proximity to Cabanaconde, but there were none.

After approximately two hours (and with only a few sips of water left in our bottle) we spotted a pathway leading further down on to the road upon which we were walking, and over the other side of the road it appeared to continue towards the only indication of a town that we could see a long way off into the distance. 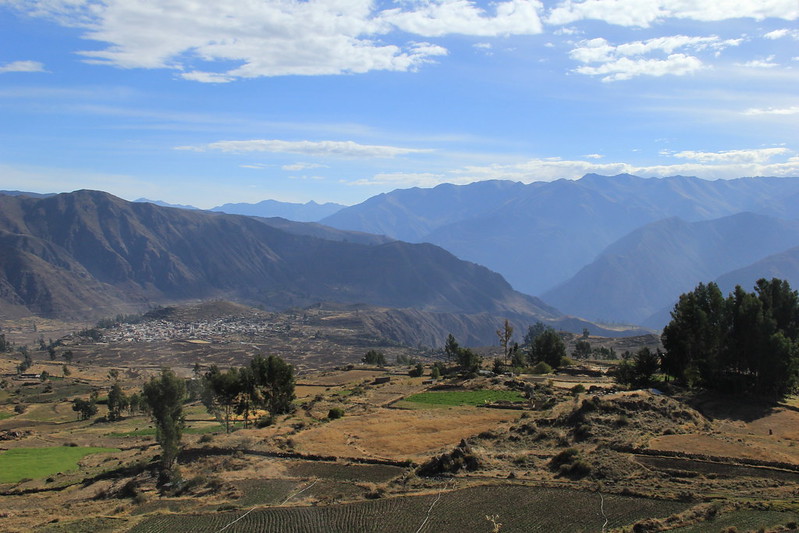 We initially followed the pathway down on to the lower section of the road and as we were contemplating whether or not to continue along it we spotted a local man heading in the opposite direction.  As he walked towards us we asked, “para Cabanaconde?”, to which he gave us an affirmative response.  Delighted, we thanked him and proceeded to follow irrigation channels on a rocky, unmade track towards our destination. 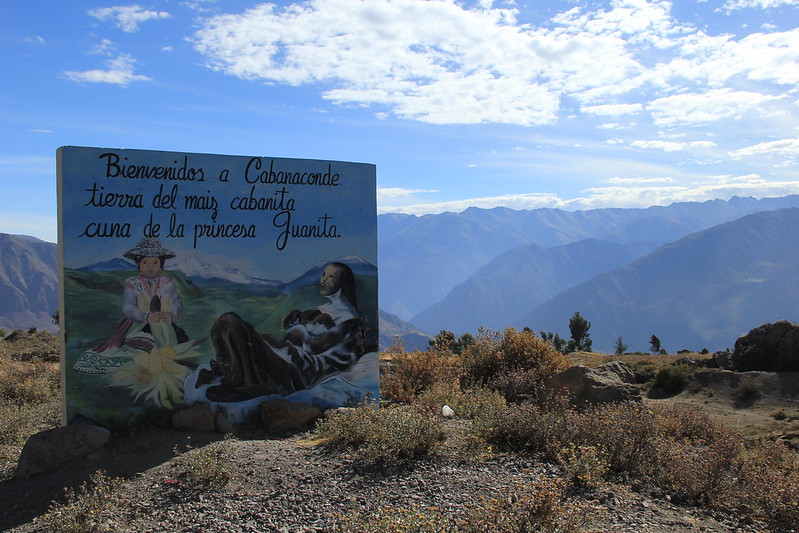 We finally arrived after two and a half hours of walking, and later discovered that it’s actually 16 kilometres from the Cruz del Condor viewpoint by road.  So God only knows how much longer it would have taken us if we hadn’t found the shortcut!  Ok so it may be an ‘easy’ downhill walk but we were cursing the gentleman at Condor Trek for not pointing out the sheer distance involved. 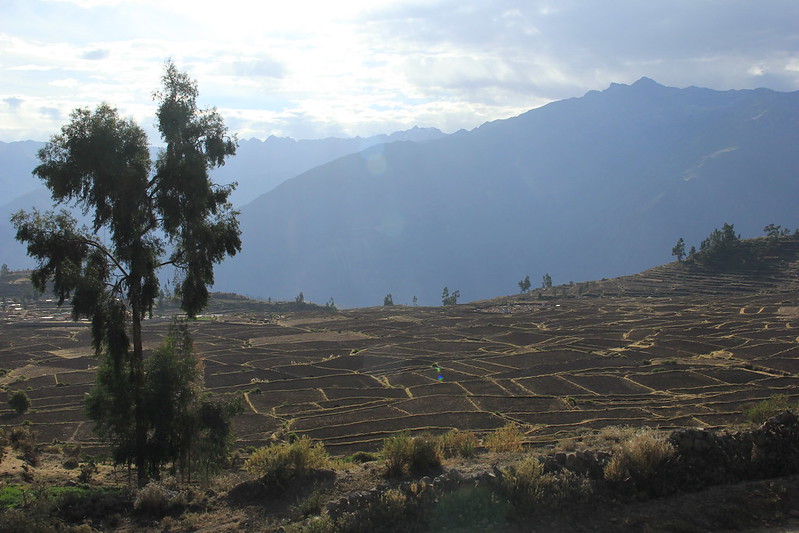 We were so relieved when – with the help of a couple of villagers – we finally found Pachamama Backpackers, the cozy guesthouse where we’d booked a room for the night.  There was a brief moment of panic when the guesthouse owner informed us that he had not received our booking due to them having no internet connection, and therefore only being able to check their emails on a weekly trip to Arequipa (why oh why then does their property appear on online booking website Hostelworld?), but fortunately they had an available room.

There is no heating in the bedrooms at Pachamama Backpackers but this is more than compensated for by their cozy restaurant and bar area, which is kept toasty warm by the huge clay oven in the centre of the room.  From the clay oven they serve up some of the tastiest pizza around, accompanied by some delicious salads and hot coca tea.  There’s even a resident cat who will happily curl up on your lap whilst you eat.

We hadn’t even started the trek yet and already we felt like we were in the middle of a fantastic little adventure far from the well-trodden tourist trail.

Find out what happens next in part two!

Highlights of Huaraz and the Cordilleras

Exploring Arequipa: A Comprehensive Guide to the City

It's Friday and I've just realised I've not shared

This little gem of a building is actually around t