Myanmar is not a country that’s known for its food.  The cuisine of neighbouring Thailand is popular the world over, with its distinct, aromatic, but simple amalgamation of flavours.  Vietnam is famous for its Pho (noodle soup), Laos for its laap (meat-based salad), and Cambodia for its Fish Amok (fish curry).

I didn’t actually have the slightest clue what kind of food I may be eating during my time there, but bearing in mind how much I love Southeast Asian cuisine I was really looking forward to finding out. 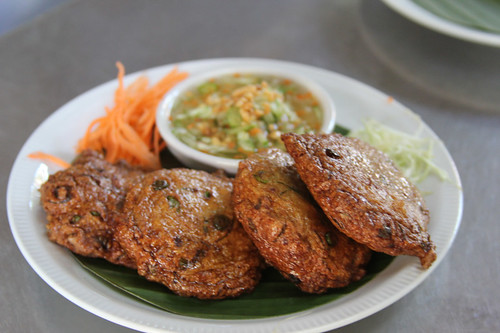 Due to its geographical location (it shares borders with India, Bangladesh, China, Laos, Thailand), and myriad of local ethnic minorities (there are 135 different tribes in the country), Myanmar’s cuisine is diverse and borrows influences from Indian, Thai and Chinese cuisine.

Here are a few of my favourite Burmese dishes and dining experiences from the two weeks I spent exploring this fascinating country.

An Introduction to the Cuisine of Myanmar

Mohinga is a meat-free Burmese rice noodle soup that’s commonly regarded as the country’s unofficial national dish.  What makes the soup unique is that it’s made from a thick catfish and shallot-based stock, and is traditionally served for breakfast.

Being a non-meat eater it was so refreshing to know that regardless of which restaurant or tea shop I wandered into, there would be something on the menu that I could safely consume.  And the bonus?  It was actually really tasty!

It’s usually custom to add your own noodles, spring onion, chillies, coriander and chopped hard-boiled eggs, so can tailor it to your own palette.  Personally I think it tastes best with as much fresh coriander as you can fit in the bowl, but maybe that’s just me. 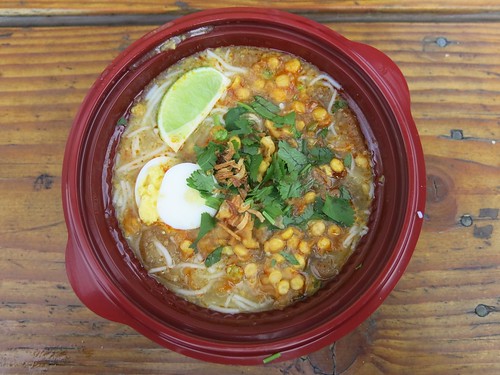 You’ll see this listed on most menus as “tea leaf salad” because Lahpet means “green tea” and thoke means “salad.”  Myanmar is one of the few countries where tea is eaten as well as drunk.

I’m always up for trying unusual food combinations, so the idea of tea leaves used in a salad fascinated me.  And I was so glad I decided to order Lahpet Thoke for the first time in Nyaung-U, because it quickly became my favourite dish in Myanmar.

To make the salad green tea leaves are fermented and mixed with a combination of sesame seeds, fried peas, fried garlic, peanuts, and other crunchy ingredients, and dressed with peanut oil, fish sauce, and lime.  Totally unique and utterly delicious. 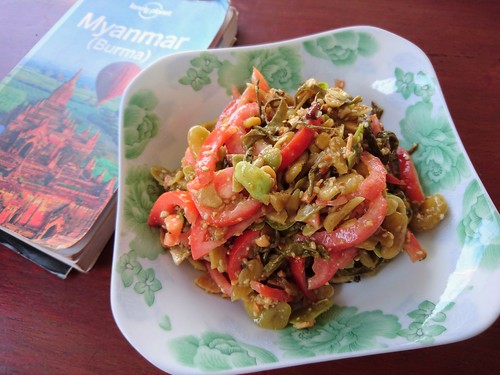 The Burmese love their salads, so you’ll often find all manor of varieties, such as ginger salad, avocado salad (more on that in a minute!), aubergine salad, and papaya salad – which is similar to the Thai version but a lot less spicy.

The Burmese make great salads, and they grow tasty avocados. Combine these two elements and you have another of my favourite dishes in Myanmar.

Every restaurant had its own slightly different version, but essentially the Burmese avocado salad is like a chunky guacamole: lots of sliced, overripe avocados, chopped tomatoes, and diced shallots mixed with garlic, chillies, fresh coriander, lime juice, salt, and ground, roasted chickpea or peanut powder.  Some places even add toasted sesame seeds too.

We lived on this on our Kalaw to Inle Lake trek.  It’s fresh, tasty, cheap, and filling, and I simply could not get enough of it. 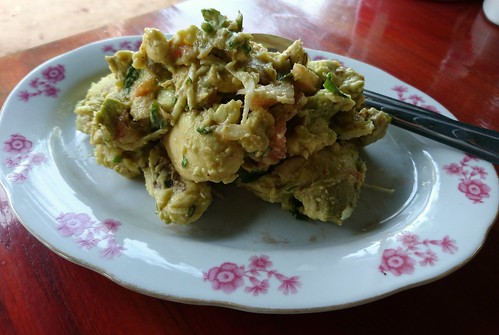 Burmese tofu is s a food of Shan origin, made from water and flour ground from yellow split peas and the Burmese version of chickpea flour, also known as besan flour.

One of the most popular tofu dishes in Myanmar is To hpu gyaw (yellow tofu), which is cut into rectangular shapes, scored in the middle, and then deep fried and served with a spicy sour dip.

And this being Myanmar, it comes served – like everything else does – with tiny white porcelain cups filled with green tea. 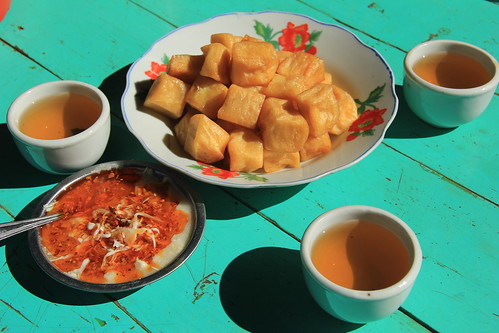 There is a very strong Indian influence in Burmese cuisine – probably more so than either Thai or Chinese. And this is especially prevalent in Yangon, where a wander down Mahabandoola Road (one of the main roads that leads from downtown Yangon to Sule Pagoda and the City Hall) is reminiscent of a meander through the streets of Delhi.

Many of the city’s ubiquitous tea shops also serve a huge array of Indian snacks (samosas and palate – fried flatbread) and sweets (usually made from a combination of grated coconut, coconut milk, rice flour, and semolina), as an accompaniment to the sweet, fragrant, milky brew. 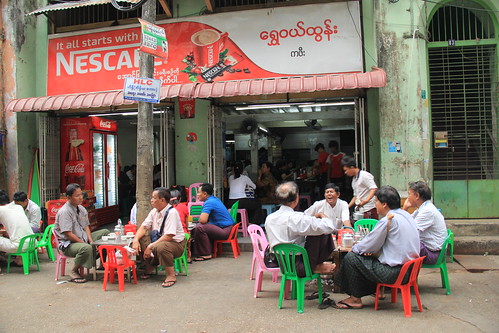 Most soups are lentil based, reminiscent of an Indian dahl, and Indian curries are as widely available from roadside food vendors as they are from the numerous Indian restaurants scattered across the country.

Whilst there is a multitude of Indian-influenced cuisine available throughout Myanmar, my absolute favourite was the simple chapati, accompanied by a selection of tasty chutneys.  And some of the best I sampled weren’t in Yangon or Mandalay, but at a tiny cafe at the top of a mountain covered in mandarin and tea plants, at the start of our Kalaw to Inle Lake Trek. 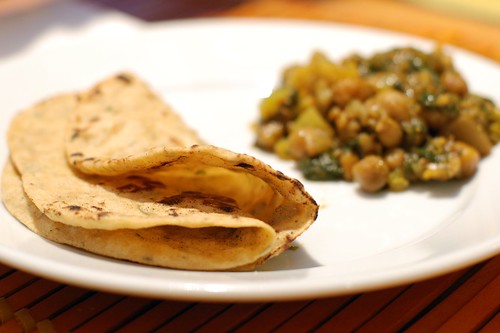 Originating from the Shan state (a region in the eastern part of Myanmar that borders China, Thailand, and Laos), Shan Khauk Swe is one of the most popular noodle dishes in Myanmar.  The noodles used in this dish are made from rice – either the common wetland rice or the more glutinous Shan variety – and then soaked.

Whilst you can find Shan noodles throughout Myanmar, one of the best (and cheapest!) places to sample a wide variety of Shan noodle dishes is 999 Shan Noodle in Yangon.  Prices start from just 500 KYAT. 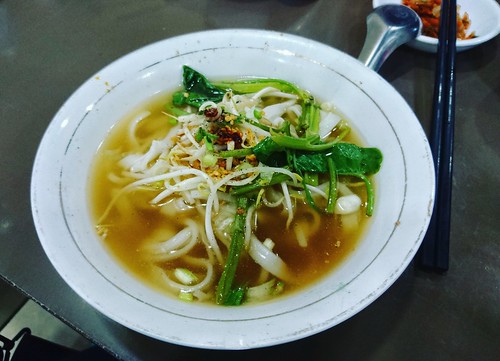 The Burmese love to eat fresh fruit with their meals.  And why not when there’s such a vast array of readily available varieties?  During our two-week stay we were served papaya, pineapple, water melon, guava, mandarin, strawberries, banana, pomelo, mangosteen, sugar apple, and dragon fruit. 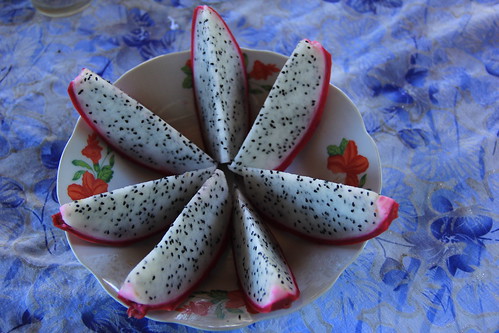 I don’t have much of a sweet tooth but I do love fresh fruit, and were it as cheap and fresh, and tasty as it is across most of southeast Asia, I would quite happily eat it for every single meal of the day.

If you’d like to do some further reading on the cuisine of Myanmar, or even try some recipes yourself, give the following publications a try.

Have you visited Myanmar before?  What did you think of the food?  What was your favourite dish? And if you’ve never been, tell me which country cooks up your favourite cuisine, in the comments below 🙂 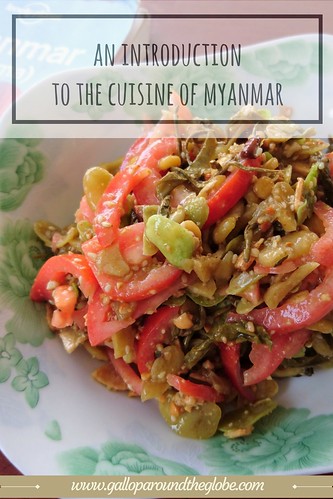