From glistening pagodas to well-preserved colonial architecture, tea shops and markets, here are my highlights from 3 days in Yangon, Myanmar.

Yangon (ရန္ကုန္) was the first city I visited in Myanmar.  It was my introduction to a country I’d been ridiculously excited about exploring ever since it officially reopened its doors to tourism in 2012.

Although it’s no longer Myanmar’s capital city (this title now belongs to Naypyidaw), Yangon is still recognised as the cultural and commercial heart of the country, as well as being its largest metropolis. 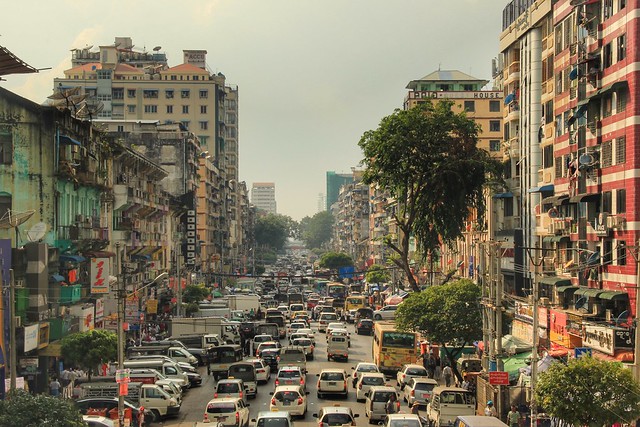 We paid 12,000 KYAT for a taxi from the airport to 14th Street in Downtown Yangon (the location of our accommodation for the next couple of nights; more on our awesome little hostel later!) and then set about exploring the city.

Now I’m not a city girl.  I lived in Cambridge as a child but I’ve spent most of my adult life in Shrewsbury, a large town in England with a population of just 72,000.  Everything in my hometown is walkable.  So, much as I have travelled to large cities many times, I always seem to forget to take into consideration just how big they really are, and how long it can take to get around them.

Yangon was no exception; I was only able to tick off around half of the attractions I’d originally intended to.  It’s expensive to rely on taxis, even in Myanmar, and it’s time-consuming (and sometimes stressful!) to rely on public transport.  So – with the exception of our sunrise trip to Shwedagon Pagoda – we walked everywhere. 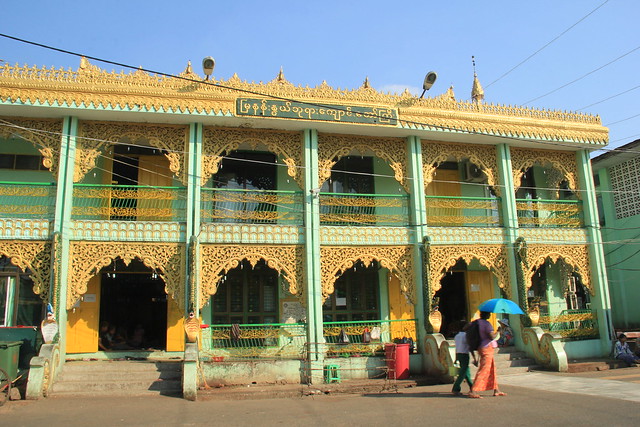 And do you know what? I absolutely loved it!  I felt as though we saw so much more of the city than we would have done, had we simply been hopping from place to place from the comfort of an air-conditioned taxi cab.

Yes the heat in Yangon is oppressive.  It’s a busy, smelly, and noisy city, and the traffic is crazy.  But on the flip side it’s home to some of Southeast Asia’s most impressive colonial architecture, it’s got a fascinating tea shop culture that dates back centuries, and its streets are alive with colourful open-air markets and eateries.

So without further ado, here are my personal highlights of my 3 days in Yangon.

Let’s start with one of my absolute favourites.  Shwedagon Pagoda is recognised as the largest and most sacred pagoda in Myanmar, because its 100-metre tall gilded stupa is believed to contain strands of hair belonging to the Gautama Buddha, on whose teachings Buddhism was founded.

It’s located in an elevated position on Singuttara Hill and dominates the city’s skyline, glistening with thousands upon thousands of gold bars, sapphires, rubies, and diamonds. 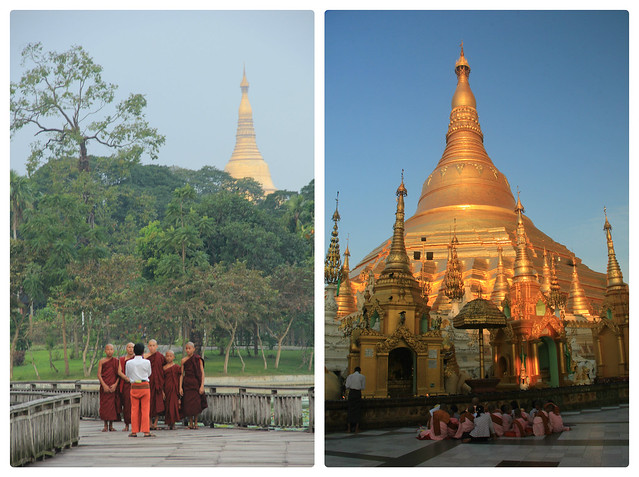 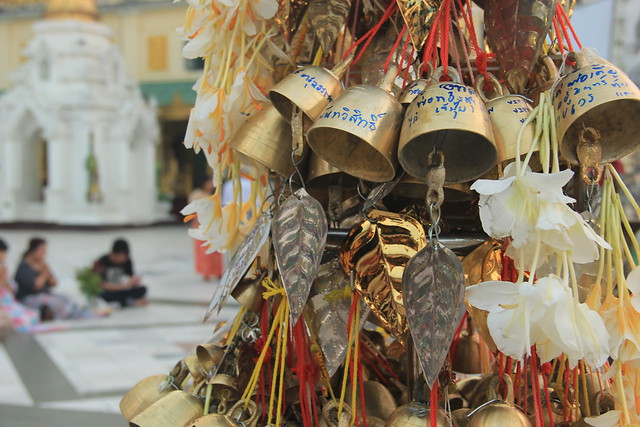 We visited at sunrise when the grounds were delightfully quiet and the only sounds around us were of birdsong and of monks chanting.  Even as more people arrived, the number of foreign tourists were visibly outnumbered by Burmese nationals, which made Shwedagon Pagoda feel much more like a place of worship than a tourist attraction.

Whether or not you make it there for sunrise, a visit to Shwedagon Pagoda should definitely feature somewhere on your 3 days in Yangon itinerary.

For the price of just 100 KYAT (6 English pence or 7 American cents), you can take a three-hour ride on Yangon’s Circle train as it rocks and rumbles its way in a loop around the outskirts of the city. 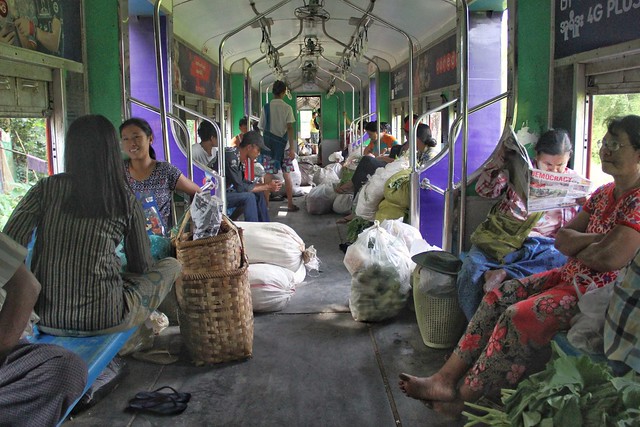 An average of 100,000 daily commuters use the train (many to transport their wares from station to station), so it’s a unique way to experience the essence of local life in Yangon.

The train passes through a total of 39 stations, stopping for just moments at each one.  And the farther you travel from the centre of the city the more the landscape changes from city concrete to fertile wetlands, rice paddies, and rustic villages. 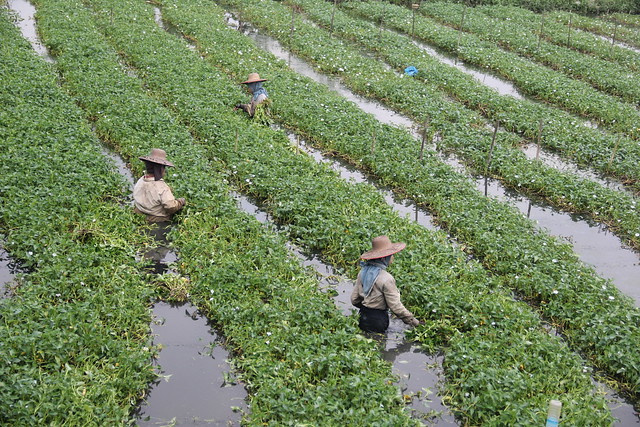 We were warned beforehand that the train could get very busy and – due to the lack of air-conditioning – unbearably hot.  But we found completely the opposite to be true.  We could wander freely up and down the carriages and the open windows and doors created a natural airflow through the train.

A ride on Yangon’s Circle Train gives you a fascinating glimpse into the daily lives of the Burmese people, away from the commercial centre of the city.  And even if you only ride a small part of it, it’s completely worth doing during your 3 days in Yangon.

In 1852 the British seized much of Myanmar (then Burma) and subsequently constructed a huge number of grand, impressive, majestic buildings in Victorian, Queen Anne, Art Deco, British Burmese and Neoclassical style.  Even after decades of isolation and economic stagnation, a huge number of Yangon’s buildings have survived largely intact. 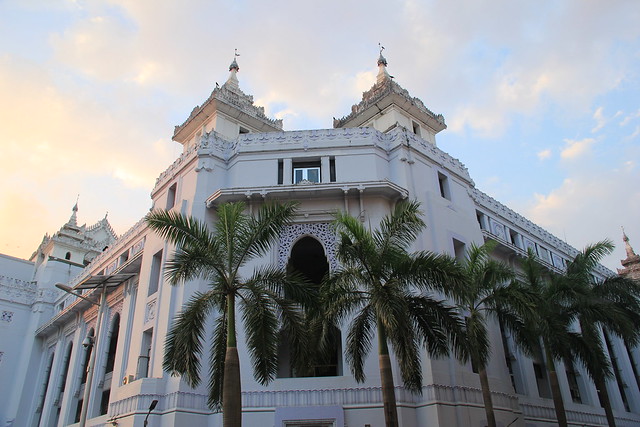 On our first afternoon in Yangon we followed Lonely Planet‘s self-guided city walk.  It took us past notable historic buildings such as the City Hall, Customs House, Central Post Office and former Immigration Department and Regional Office Complex.

In these parts of the city I felt like I was back on the streets of Havana, Cuba. 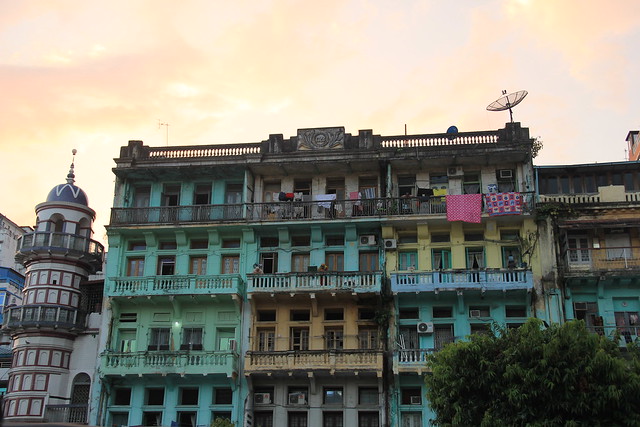 On our flight from Mandalay to Chiang Mai I read an article about Yangon’s tea shop culture.  In the article the writer meets with a local Burmese man, Thurein Win, at one of Yangon’s ubiquitous tea houses.  Win asks the writer if he’s read Orwell’s  “A Nice Cup of Tea,” to which he replies that he has.  Win continues,

“you know, when Orwell says Indian tea leaves, he means Burmese; Burma was part of British India then.”

Yangon’s tea shops have become an integral part of the city’s culture, a place for locals to gather and while away hours of their time in caffeine-fuelled conversation. 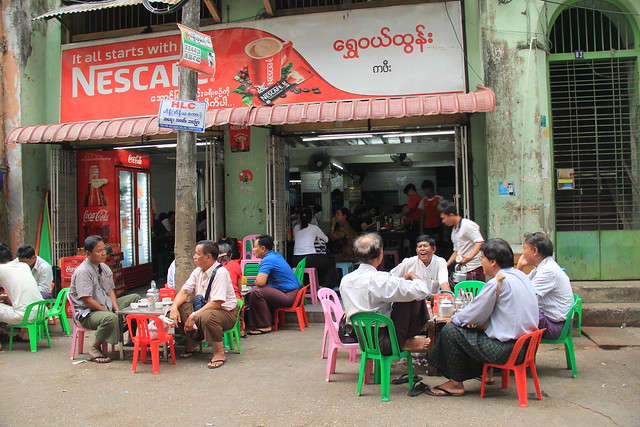 The fragrant milky brew they serve in Yangon’s tea shops is black tea with a generous spoonful of condensed milk.

It arrives in a tiny white cup on a tiny white saucer, and usually with a choice of available snacks, such as Móhìngà (a meat-free noodle soup that’s regarded as Myanmar’s unofficial national dish), samosas, fried potato balls, and Indian sweets. 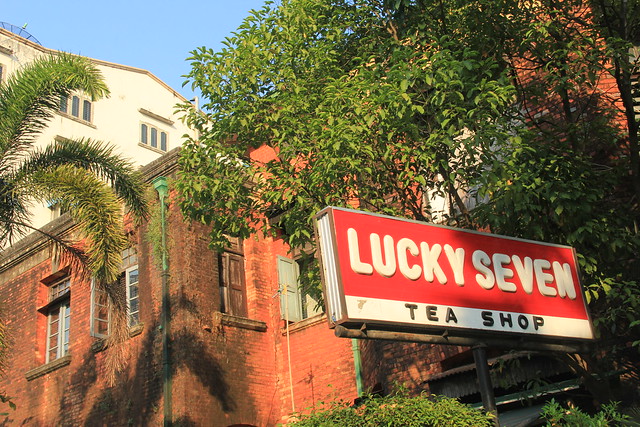 Just as I became addicted to Lao coffee (strong ararbica or robusta blend sweetened with condensed milk) during the 30-days I spent in Laos, I could not get enough of the cups of sweet, fragrant, milky tea served in Yangon’s tea houses.  Make sure that you incorporate plenty of tea shop stops into your 3 days in Yangon itinerary.

You can’t go very far in Yangon without stumbling across one of its many street stalls, open-air markets, road-side eateries, or tea shops.  And they’re totally fascinating to watch and photograph, even if you don’t actually purchase anything. 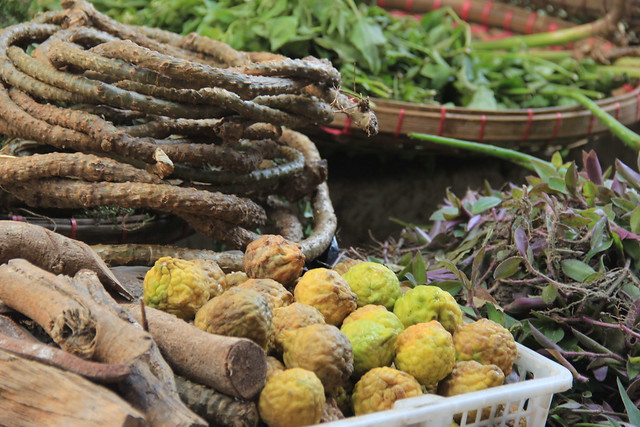 If you’re feeling hungry you can find everything from quails eggs and fried samosas, to green mango with chilli and unidentifiable meat snacks.

It’s also possible to buy carbon brushes, all manner of nuts, bolts, and springs, strips of LED lights, and even generators.

We even spotted a baseball cap with the wording “I like the big burger” on the front.  Obviously an essential on anyone’s shopping list.

Like Yangon’s tea shops, 999 Shan Noodle has also become a bit of an institution in the city.  It’s widely recognised as one of the best and cheapest noodle shops in the city.  If it wasn’t for the bright red lettering above the open shop front, you could quite easily miss this tiny, cheap and cheerful looking eatery behind the City Hall. 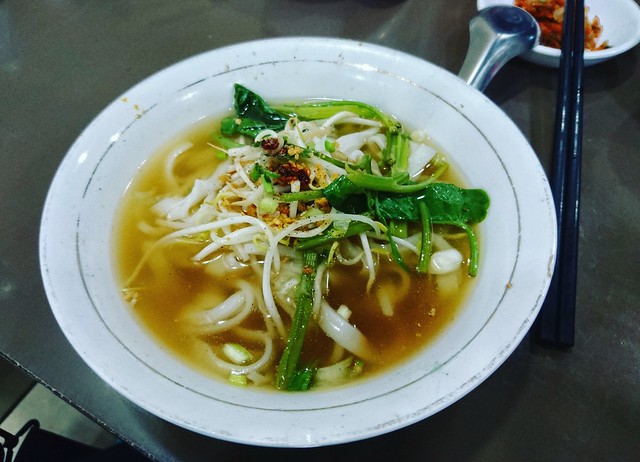 But don’t be fooled by appearances; the food here is good (if a little on the spicy side), and there are a ton of vegetarian options.  It’s equally popular with locals and tourists, and is always busy regardless of the time of day you’re passing.

I couldn’t write a post about my highlights of Yangon without mentioning our fantastic little hostel.  Having read awful things about the inclusive breakfasts, wifi, and availability of hot water in Myanmar hostels and hotels, I was completely bowled over to discover that this was not the case at all.  At least not any more; tourism is developing quickly in this country. 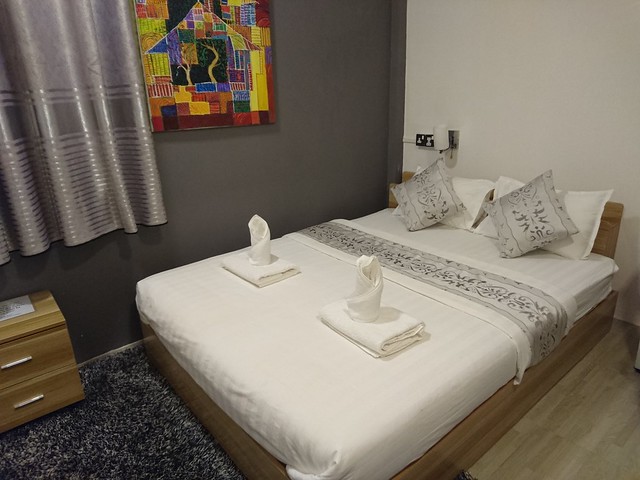 Linda, the lady who greeted us when we arrived (and who I assumed must be the hostel owner or manageress) couldn’t have been more welcoming and helpful during our stay.  She treated all her guests like extended family and even insisted we add her on Facebook when we left.

The wifi in the lobby / common area worked well enough to upload multiple photographs to Flickr, and although the signal was not quite as strong in our room, it was still sufficient to browse the internet, to comment on and share posts, and respond to emails.

Breakfast consisted of toast, eggs cooked in which ever way you requested them to be, fresh fruit, and bottomless cups of coffee or tea.  There was also butter, jam, and peanut butter available to spread on your toast.

Although the hostel was quite a distance from the major sights of downtown Yangon (1.5 kilometres to Sule Pagoda), it was just around the corner from an open-air food market and several road-side eateries, and a few streets down from the most amazing little bar that served Mojitos for 1000 KYAT (60 pence) and beers for 800 (47 pence).

What’s more, a wander down Mahabandoola Road (one of the routes you can take to head towards Sule Pagoda and the City Hall) is reminiscent of a meander through the streets of Delhi. There is so much to see, hear, taste and smell, that you’ll almost forget about the actual distance you’re covering as you walk.

Have you visited Yangon before?  If so, what were your personal highlights?  If not, is it somewhere you’d like to go? 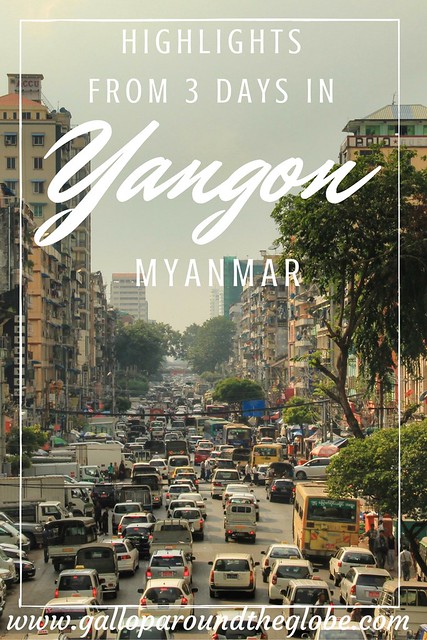 Sunrise at the Shwedagon Pagoda, Yangon – Gallop Around The Globe