Despite only being 37 kilometres from the Thai Elephant Conservation Centre (the only government-sponsored elephant centre in Thailand), this charming city in northern Thailand sees very few visitors.

Yes, you’ll hear backpackers drop the names Chiang Mai, Chiang Rai, Pai, or even Mae Hong Son into conversation but if you happen to mention that you spent time in Lampang, you may be met with a few puzzled looks.

Lampang is situated in the valley of the Wang river basin, and boasts a long history of human settlements, dating back more than 1000 years. It’s Thai name “Mueang Rot Ma” means “Horse Carriage City”, and a wander through the city’s ancient streets will enlighten you as to why. It is here that horse-drawn carriages are still in regular use for transportation.    It is likely that this tradition finds its roots in the early 20th century, when Lampang was an important centre of the timber industry, and saw an influx of migrants from British-controlled Burma.   However, I find it both endearing and intriguing that this tradition has lived on, especially considering how rapidly modern civilisation is seeping into the culture of the towns and cities that surround Lampang.

Many of the buildings within the city are of wooden construction, and there are also some impressive Lanna temples and elegant teak mansions, many of which are located along Thalart Gao Road. The most remarkable of these mansions is Ban Sao Nak (House of Many Pillars), which was built in 1895 for a wealthy Burmese family.  Ban Sao Nak has now been transformed into a privately-owned museum furnished with Burmese and Thai antiques, but it’s the structure itself – the huge teak house supported by 116 pillars – and the beautifully manicured gardens which surround it, that are the primary reasons you should pay this place a visit.

Thalart Gao Road really comes alive on a Saturday and Sunday evening when it plays host to the popular Gad Kong Ta Night Market.  The whole street (and a few of the smaller tributaries which branch off it) is lined with stalls selling a vast array of interesting foods (amongst the more tasty looking options, we spotted a goats head being cooked over a small fire),  colourful local handicrafts, music instruments, and C.D’s containing the northern folk music played upon them.  Although more common to see other non-Thai faces here than anywhere else in Lampang, Westerners were definitely in the minority, and there wasn’t a single wooden frog in sight (if you’ve visited markets in Bangkok or Chiang Mai, you’ll know what I mean!)

It’s also the only place in Thailand I’ve visited (and I’ve visited quite a few over the years) where, at 6pm on the dot every evening, the Thai national anthem blares through the speakers, and every person on that busy market street stops in their tracks, stands completely still, and quietly takes a moment to pay their respects to their King and country.  It’s surreal, but also touching, and is yet another age-old tradition that lives on within this city.

Having only a limited amount of time in Lampang (on this occasion I was on a 17-day trip, introducing my boyfriend at the time, Alex, to one of my favourite parts of the world), we decided to skip Wat Chedi Sao (6km out of town) and Wat Phra That Lampang Luang (18km out of town) in favour of Wat Phra Kaew Don Tao, the oldest temple in the city, and one that – between 1436 and 1468 – enshrined the sacred Emerald Buddha, currently residing in Bangkok’s Wat Phra Kaew.

Wat Phra Kaew Don Tao is located on the west bank of the Wang river, in a peaceful setting on the outskirts of what is now recognised to be central Lampang.  In order to gain entry to this temple, through the imposing and intricately decorated gold entrance gates, it is necessary to cross the bridge, guarded by the heads of two dragons, whose undulating serpentine bodies span its entire length.  The temple isn’t as grand as its entrance suggests but there are some interesting features worth checking out.

However, the highlight for us was watching a group of young monks, dressed in their instantly recognisable saffron robes (or at least, the bottom halves of them!), splashing around in the murky waters that surround the temple, searching for creatures beneath its surface.  Much commotion, and laughter ensued when one of them appeared holding the tail of a snake.  As it wriggled, he promptly released it into a makeshift wheelbarrow filled with water, whilst the others crowded around, peering over with a slightly wary, but curious fascination.

Whilst sampling the delicious street foods at Lampang’s night market had been fun, we were also keen to check out the culinary offerings at one of the city’s restaurants.  Aroy One Baht was the one place recommended above all others, for an authentic dining experience, and budget-priced first rate local dishes.  Would this mean it was also full of other tourists visiting for exactly the same reason as we’d planned to?  Well, no.   Yes, we did squeeze our way into this two-storey rambling wooden house with what felt like the entire city of Lampang, but there wasn’t a single other Western face in sight.   There were English translations on the menu, but none of the waiting staff spoke English, and fortunately they didn’t need to.  There’s a wonderful system in operation here whereby you write down the numbers of the dishes you wish to order, place the piece of paper into a little box with your table number on it, and give it to the lady or gentleman who then arrives at your table to take your order.

The service was lightning fast, the food was tasty (and there’s a vast array of dishes to choose from, many of which you won’t normally see on a standard Thai menu), and the prices were embarrassingly cheap.  We ended up with our own little Thai tapas selection, all washed down with a refreshing bottle of beer Leo.  I’ve eaten at a lot of Thai restaurants over the months I’ve spent in this country, and Aroy One Baht is definitely up there in my Top Ten.

Somehow our stay in Lampang wouldn’t have been complete if we had not been lucky enough to secure one of the small number of rooms at the Riverside Guest House.  Situated at the end of Thalart Gao Road (Old Market street), this guest house is THE place to stay in Lampang.  It’s located right on the banks of the river Wang (believe it or not, having ‘Riverside’ in a guest house’s name in Thailand, does not always guarantee a setting right next to the river) in a big old wooden house amidst a lush tropical garden.

The rooms are spacious, airy, and tastefully decorated with Asian antique furniture and traditional textiles.  All have a balcony or terrace and the majority (with the exception of the cheapest rooms available – one of which we took) have en-suite bathrooms.  There are hammocks to lounge around in, or you can sit at one of the wooden tables downstairs overlooking the river, enjoy a spot of breakfast (Western or Thai available), make friends with the resident Beagles, watch the colourful dragonflies as they flit across the water, or spot lizards in the dense undergrowth of tropical plants.

At night we’d order a beer, and watch the geckos wandering around on the ceilings, or inside the lanterns hung up on the walls.  The owner of the guesthouse, noticing our fascination with these creatures, beckoned us over one evening, her finger pressed gently to her lips.  The beautiful spotted 30-40cm long resident gecko had come out of hiding briefly, and was stuck to the brightly-painted red wall, waiting patiently whilst I quietly removed my camera from its bag.

I suspect there will come a time when more and more tourists will start to discover this charming northern Thai city, with its ancient temples, beautiful wooden buildings, and time-forgotten traditions.  But until  then, it remains a wonderful slice of Thai life away from the typical tourist trail, and I thoroughly recommend that you pay a visit, to appreciate it in all of its undiscovered glory, whilst you still can. 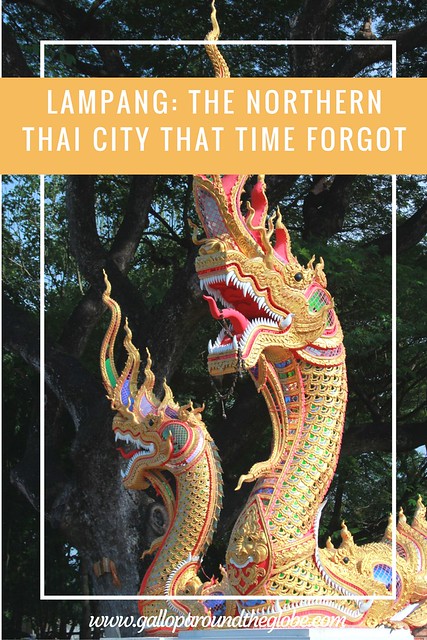