Last week I wrote about my personal highlights from three days in Yangon.  Visiting Shwedagon Pagoda at sunrise was on there, as was riding Yangon’s Circle train.

The Yangon Circle Train (otherwise known as the Yangon Circular Railway) is the local commuter rail network that serves the Yangon metropolitan area.  It was built by the British during colonial times and began operation in 1954.

It’s not your typical tourist attraction but it is one that offers a fascinating glimpse into the daily lives of the Burmese people, away from the commercial centre of the city.

The 46-kilometre loop begins and ends at Yangon Central Railway Station.  As there are two tracks, the train will either travel the route in an easterly (clockwise (R)) or westerly (anticlockwise (L)) direction.

The train passes through a total of 39 stations, stopping for just moments at each one while the passengers board and disembark – often with multiple sacks and baskets filled with fresh produce that they transport from station to station. 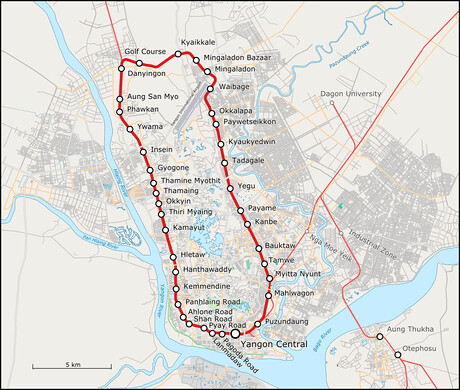 I’m not too sure whether the timetable below is still current (it’s the most recent one I could find online, dated 2014), but it’s still correct for the train we caught – at 11:30am, headed in an easterly direction.

What does it cost to ride Yangon’s Circle Train?

This is possibly the best value train ride you will ever take.  The three-hour ride will cost you just 100 KYAT (6 English pence or 7 American cents).

Although it’s possible to hop on the train at any station (all the locals were doing it after all), we couldn’t find any information regarding buying tickets at any station other than Yangon’s Central Railway Station.  So, seeing as though we didn’t wish to break the law in a foreign country and bearing in mind that the tickets were so damn cheap anyway, that’s where we started our journey. 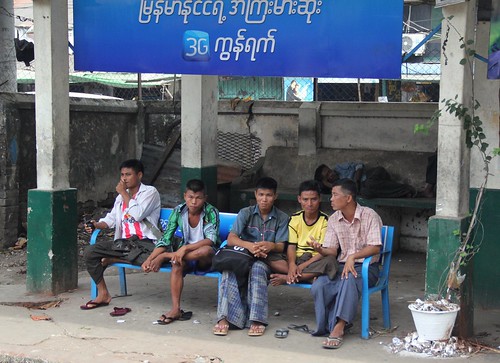 You’ll find a little kiosk on platform 7 where the tickets are sold.  The train leaves from either platform 6 or 7.  There will also be vendors on the platform selling bottles of water.  Ironically these cost 10 times as much as the price of a train ticket (1000 KYAT, or 60 pence), but I’d definitely recommend you buy one as it’s a long trip to take without a drink.

How comfortable are the seats?  Will I get a seat?

The ‘seats’ are essentially hard plastic benches on either side of the carriages.  They’re probably not too comfortable for long periods of time, but we spent hardly any time sitting down; there was too much to see and photograph. 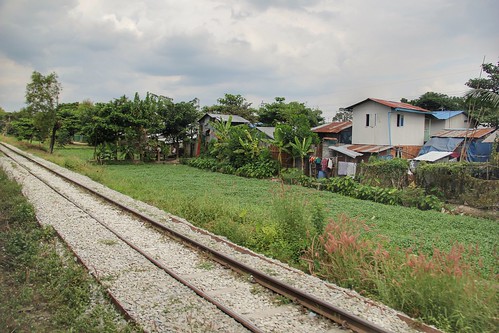 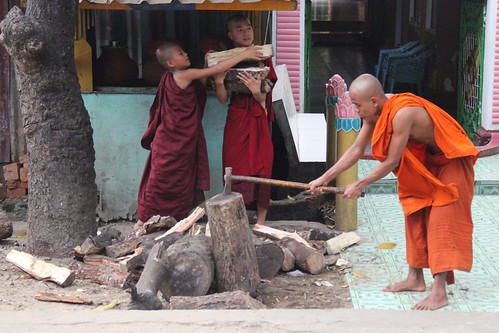 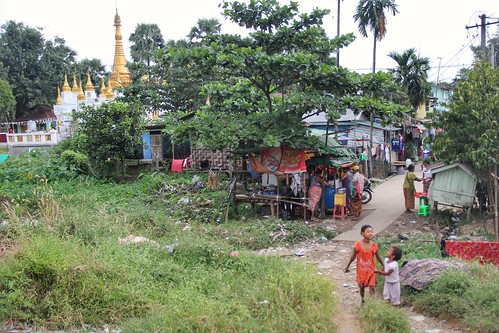 Whether you get a seat will depend upon the time of day you decide to ride the train.  I’ve heard that rush hour (before 10am and after 4pm) can be unbearably crowded, but we travelled at 11:30am, which meant that we were on the train when most people were stopping for lunch.

Yangon’s a hot city, is there any air conditioning on the train?

Travelling outside of rush hour meant that we could wander freely up and down the carriages, and the open windows and doors created a natural airflow through the train. 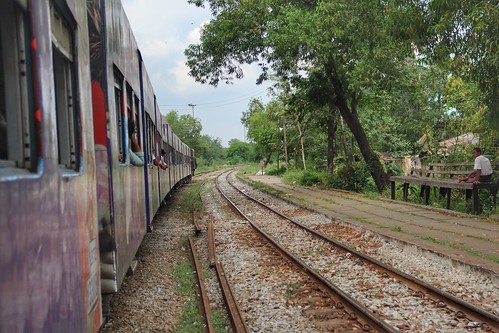 What can I expect to see during a ride on Yangon’s Circle Train?

Bearing in mind that an average of 100,000 daily commuters use the train (many to transport their wares from station to station), it’s a unique way to experience the essence of local life in Yangon. 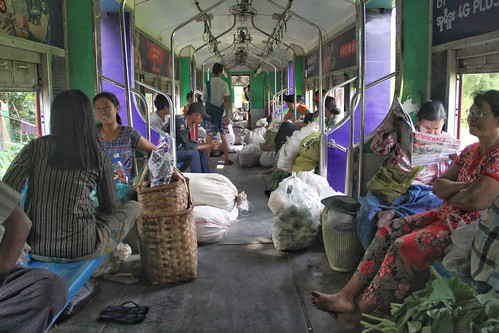 The farther you travel from the centre of Yangon the smaller the buildings become.  The houses get simpler, the train gets busier, and the more the landscape changes from city concrete to fertile wetlands, rice paddies, and rustic villages. 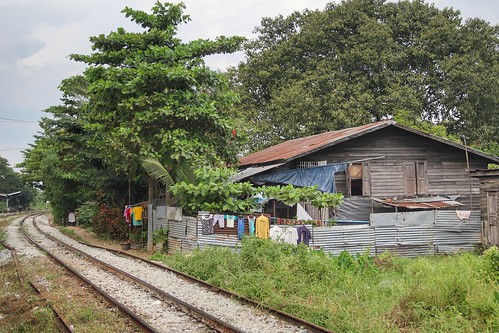 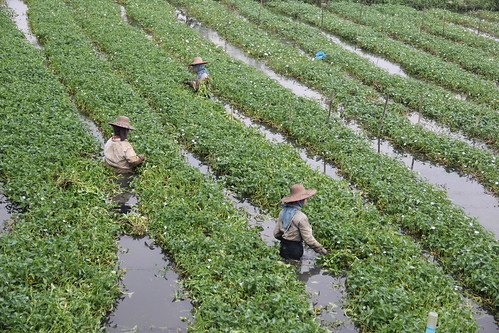 Locals sit inside the carriages processing crops, chatting amongst themselves as they do so.  Some read newspapers, some stare out of the window and some shoot curious glances at you, and smile.

Always remember to smile back, and always ask before you photograph individuals.  These are people going about the routine of their daily lives; while the majority won’t mind it can be invasive to photograph people in their comfortable, familiar environments. 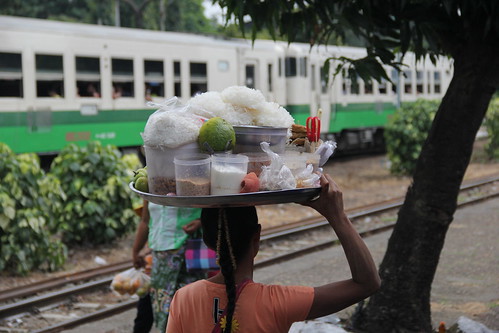 Should you get hungry you’ll find all of manner of snacks for sale as more and more vendors jump on board and the carriages rapidly turn into a moving food court.

And then there are the track-side markets, the largest of which is Hledan Produce Market, southwest of Inya Lake. 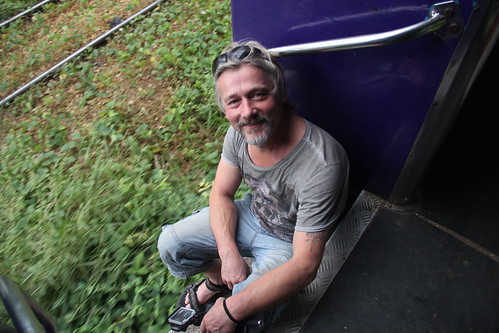 You can hear the noise and commotion as the train approaches, and if you’re sitting on the steps in one of the doorways you have a matter of seconds to get out the way before sacks of vegetables and rice are tossed into the train.  Dozens of people begin to climb aboard carrying baskets and boxes, and more food is passed through the open windows.  The last people make it on to the train just as it is pulling out of the station.

Yangon’s Circular Railway is primarily utilised by lower-income commuters – people who do not have access to a motor vehicle and therefore use the train as their major mode of transportation.  For this reason it’s not unusual to see more than just produce loaded on board.  A fully-assembled double wardrobe was one of the more bizarre items we spotted in one of the carriages.

Do you have any tips to get the most out of my experience?

As you may have gathered from my commentary so far, there’s as much to see inside Yangon’s Circle Train as there is outside the window.  So get up out of your seat and take a walk through the carriages.  Buy some snacks from the food vendors, help the locals to load their produce on to the train, smile at the shy, curious children.  It’s amazing how well you can communicate without knowing more than two of three words of each others’ language.

Visiting a new country is not just about seeing its most Instagram-worthy sights; it’s about immersing yourself in its culture, sampling its food, and learning about its people and their way of life.  Taking a ride on Yangon’s Circle Train gives you the opportunity to do all of these things.  And all for the price of just six English pence.

Do you think you’d enjoy a ride on Yangon’s Circle Train?  What’s the most fun or memorable train journey you’ve ever taken? 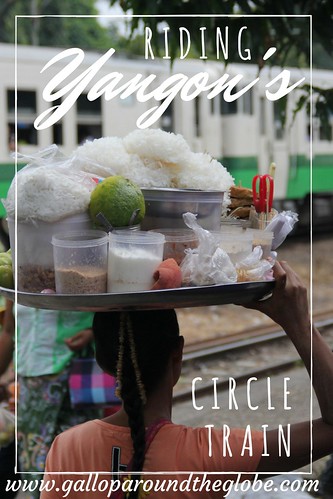 A Taste of Rural Myanmar: The Kalaw to Inle Lake Trek