If you’re looking for some islands near Athens, I recommend making the trip to Hydra – the only island in Greece where motorised transport is forbidden.  Read on to discover some of the best things to do on Hydra!

Having juggled around with various flight options (flying to Greece at the end of June is not cheap!) I finally found a roundtrip flying to Thessaloniki and back from Athens for under £200 that would give us 10 days in the country.  The cities of Thessaloniki and Athens would provide a great contrast to the mountains of Meteora, but the itinerary was missing one major jigsaw piece – a relaxing slice of island life. 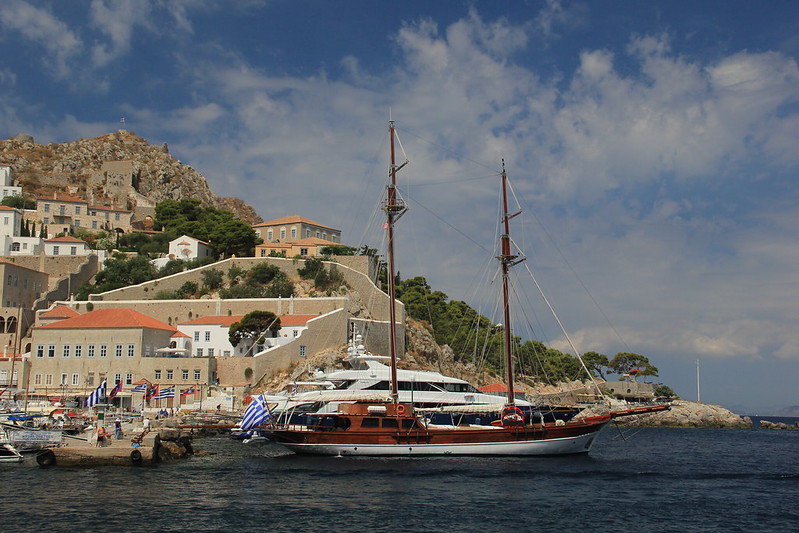 We needed somewhere close to Athens, firstly because of our limited time window and secondly because we couldn’t really afford the expense of getting to anywhere farther away.  So we researched a few of the islands near Athens.

Poros and Hydra (pronounced “eedra”) were obvious choices, but the latter appealed because somewhere back in the expanse of time I remember learning that Hydra is the only Greek island that has no roads and therefore no motorised transport.

I pictured narrow cobblestone streets, quintessential white-washed buildings with signature blue doors, and a silence broken only by the echo of donkeys’ footsteps on the ground beneath you as they pass.

The reality of course was a little different, especially when you factor in the huge number of Athenians who choose Hydra as their weekend getaway.

However, once we headed away from the main harbour in Hydra Town, the island was exactly as I’d imagined it to be.

Whether you’re here for a few days or a few weeks, here are a selection of sights and activities that I’d recommend. A few of the best things to do on the Greek island of Hydra.

Otherwise known as finding your way to the highest point in town through a confusing network of narrow winding streets and stone staircases. It doesn’t really matter where you start (there are numerous sets of stairs and alleyways leading away from the harbour) or in fact where you end up; it’s the journey that matters and what you find along the way. 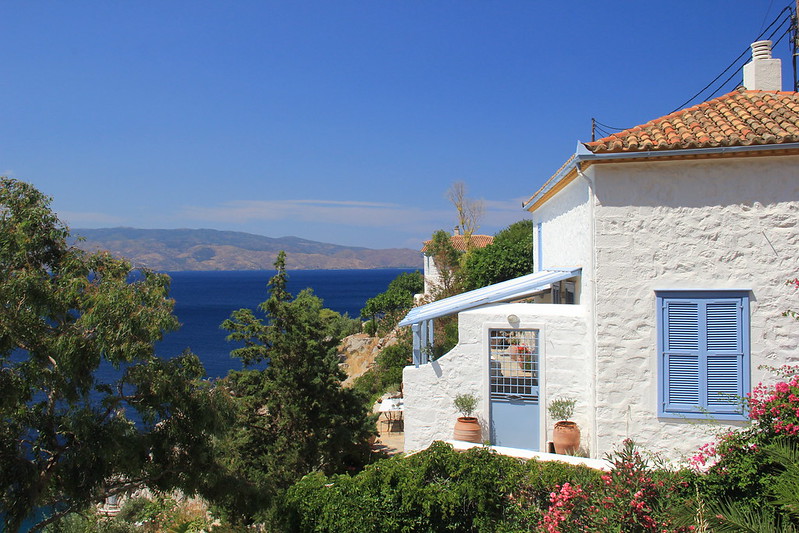 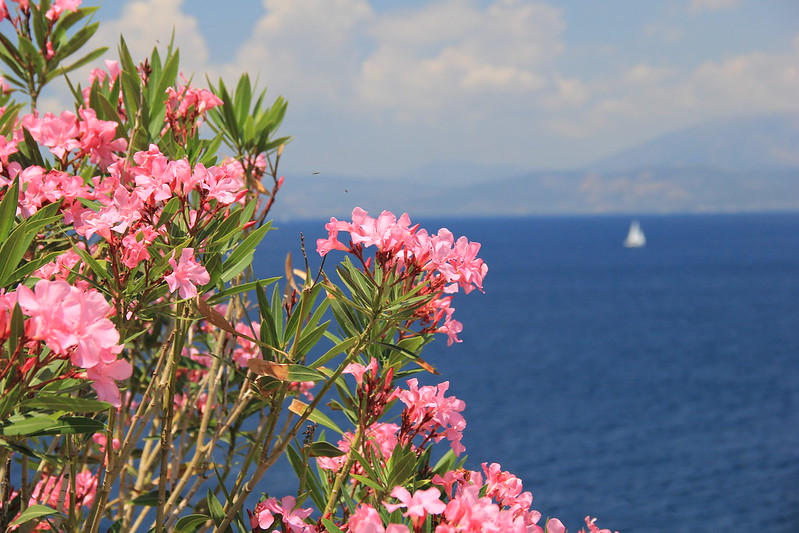 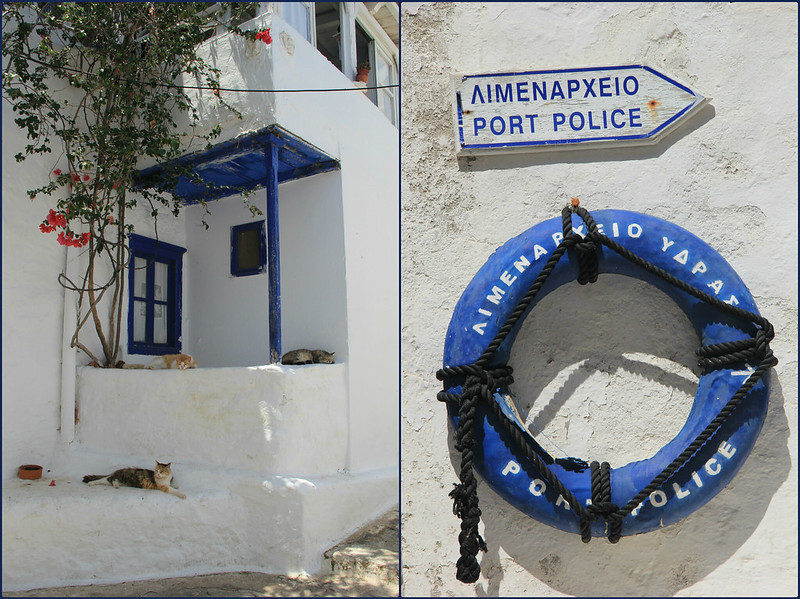 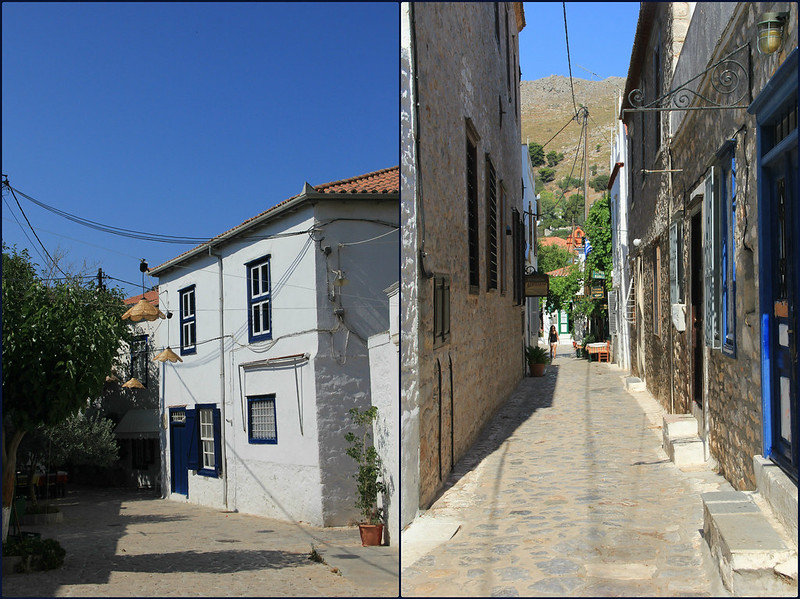 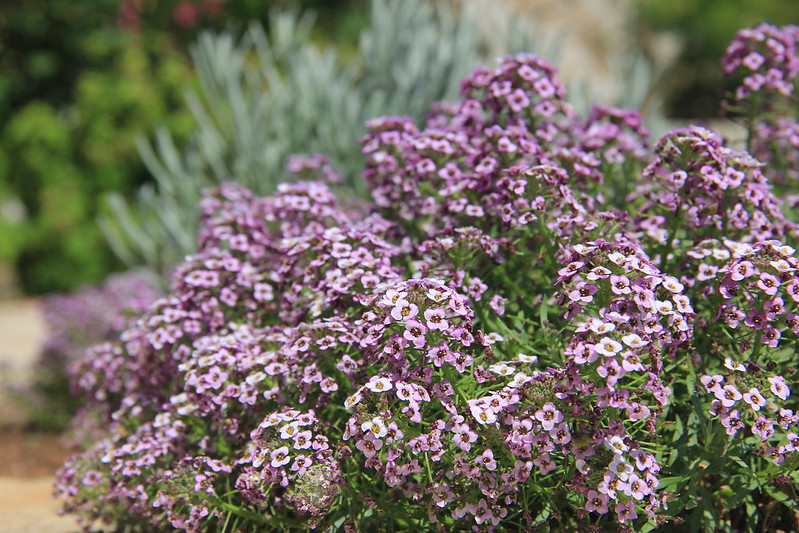 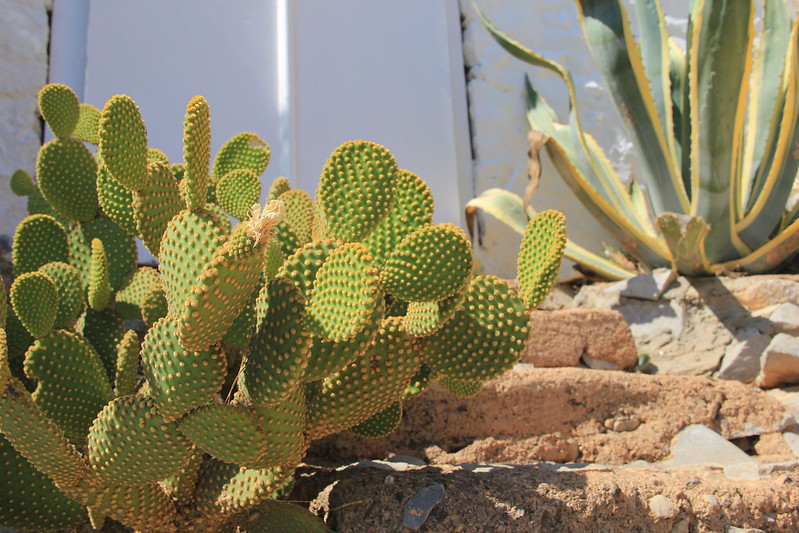 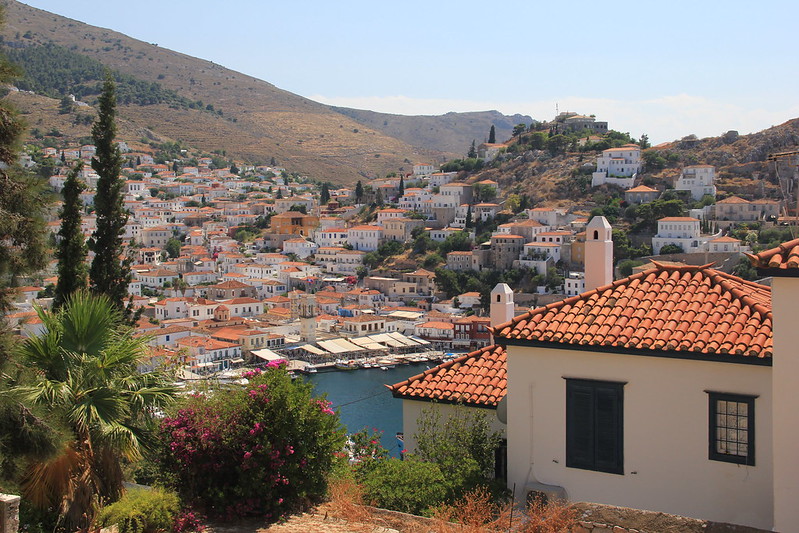 Walk the Coastal Path from Hydra Town to Plákes Vlyhoú

Head uphill past the Sunset Restaurant and you’ll find yourself on the coastal path to Plákes Vlyhoú.  It’s an easy walk and you’ll pass a number of tiny villages (and a few beaches) along the way.

Just a few minutes walk from Hydra Town, Spilia is not so much a beach but a series of flat rocks for bathing on and diving from.   It’s a lovely (albeit popular) spot and and there are some tables and sun umbrellas further up the rocks, if you’re in need or some shade or a drink from the bar. 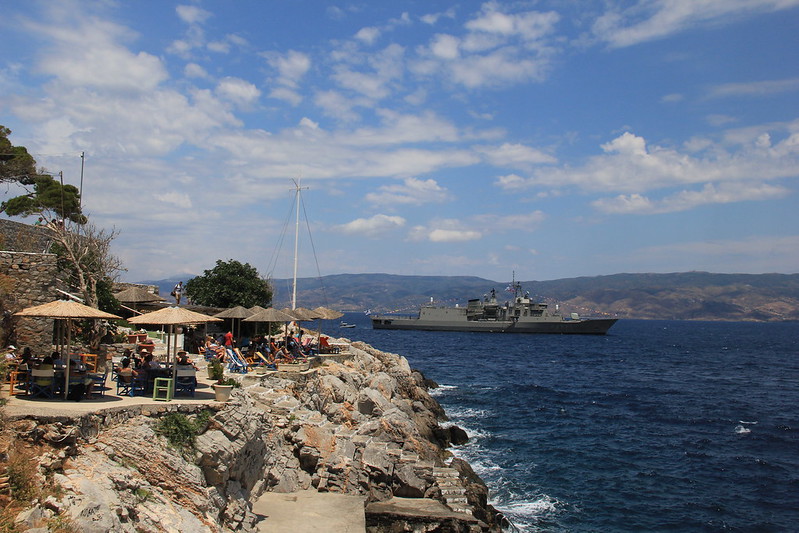 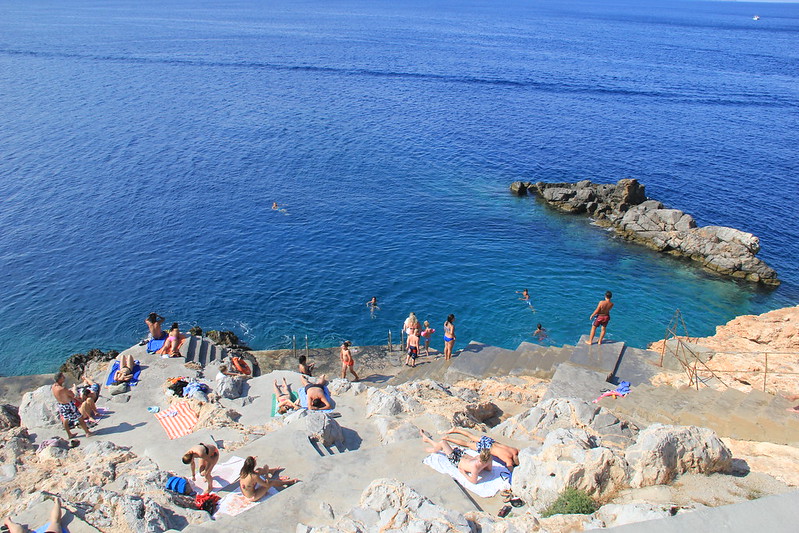 Several whitewashed buildings with terracotta-tiled roofs perch on the rugged hill that rises up behind Kamini’s small, picturesque harbour.

There’s a couple of lovely little restaurants here too – Kondylenia offers some tasty seafood and wonderful sunset views across the harbour, and Khristina is a popular local spot (book in advance or turn up early!) that is a haven for cat lovers and foodies. 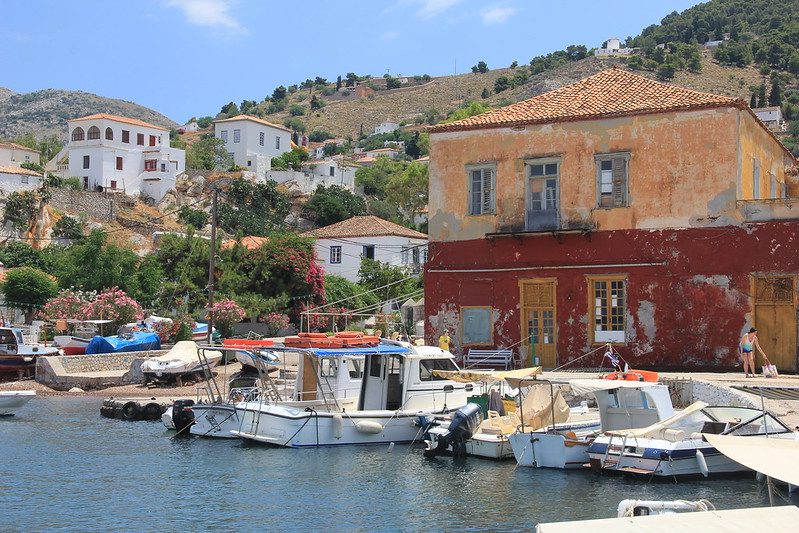 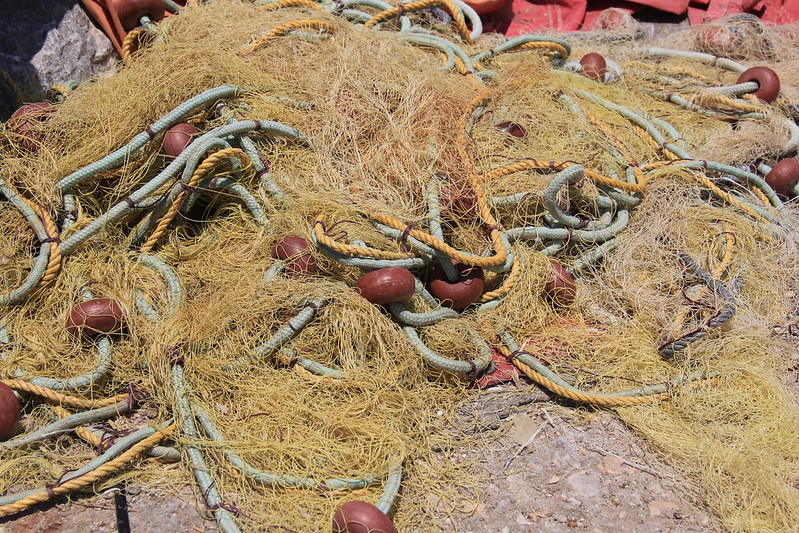 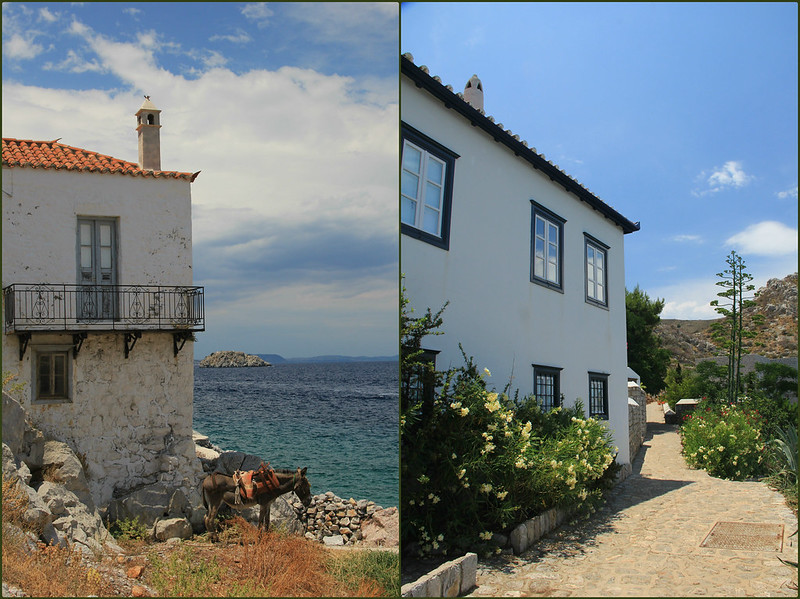 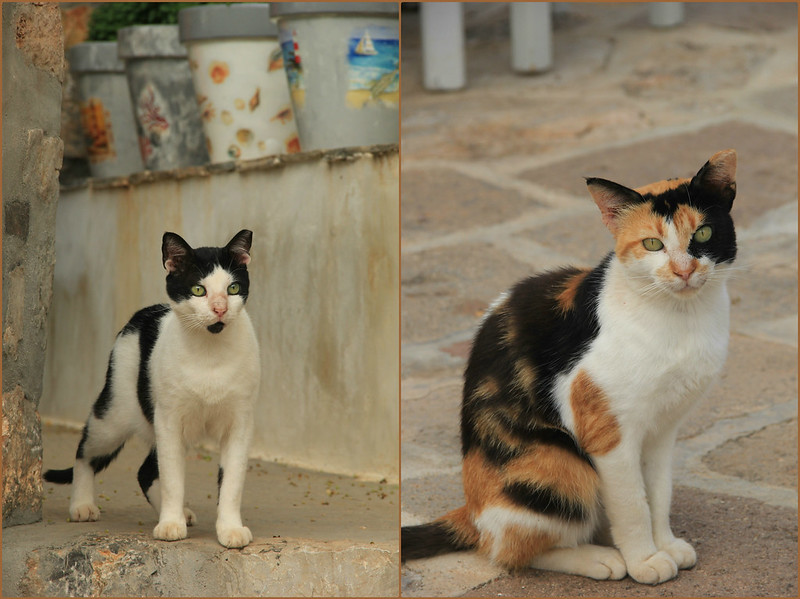 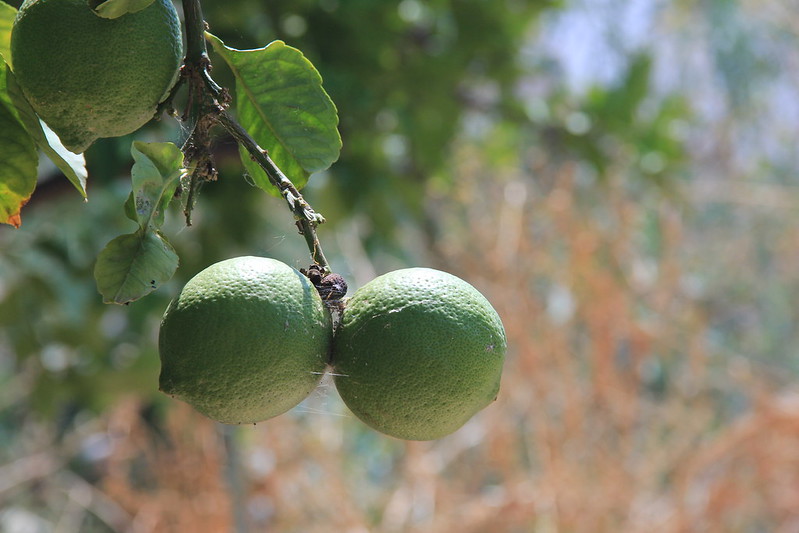 A pleasant enough spot to while away the morning or afternoon, but it was a little busy for our liking and it appeared as though the only access to the beach was through the attached bar/restaurant.

So we continued on and were rewarded with this beautiful view back along Hydra’s rugged coastline. 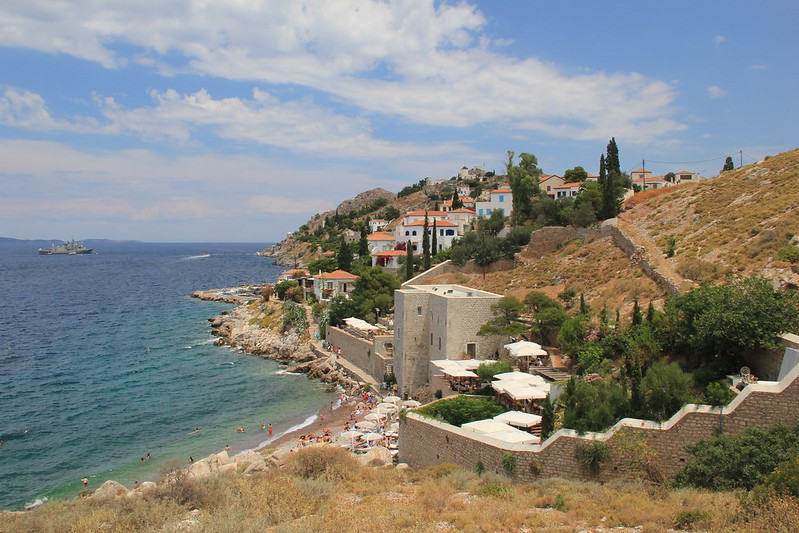 Once we passed Kastéllo, we noticed a significant decrease is the number of people we passed.  I’d like to think that it was because we were intrepid walkers after a little more than than a sun bed and a swim in the ocean, but it may have had something to do with the ominous-looking sky ahead of us. 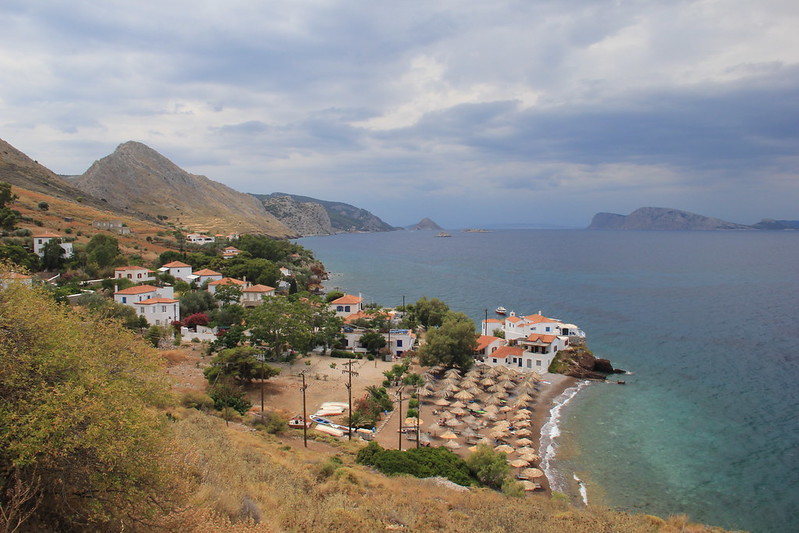 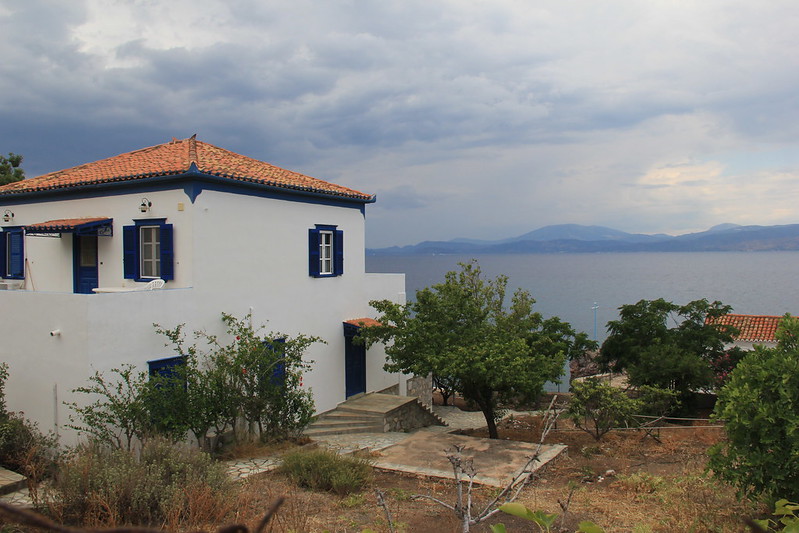 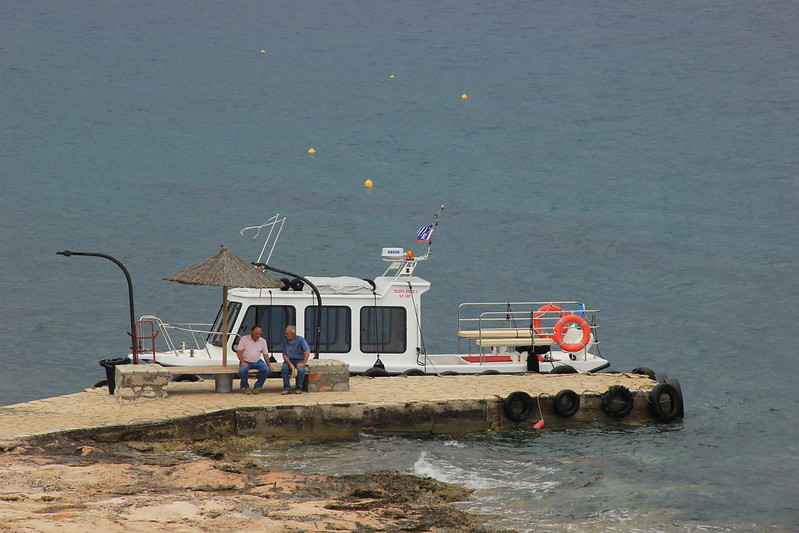 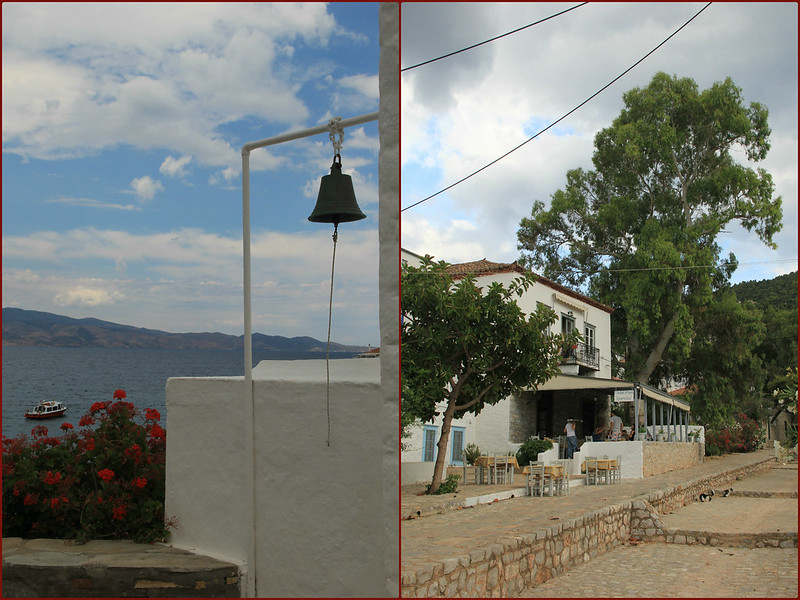 Plákes is home to the rather luxurious Four Seasons Resort and Restaurant and is a good midway point at which to grab some delicious sustenance if you’re heading all the way to Ágios Nikólaos or Bísti – as we had originally hoped to do. Unfortunately we didn’t realise that the Palamída boatyard (just beyond Plákes) was as far as we could get before the path headed inland.

Without the aid of a good map, we weren’t feeling brave enough to follow it.

So instead we made our way back to Four Seasons and drooled longingly over their inviting menu (grilled halloumi and rocket salad, prawn saganaki, and any fish of your choosing sold by the kilo), whilst simultaneously wishing we hadn’t eaten so much for breakfast. 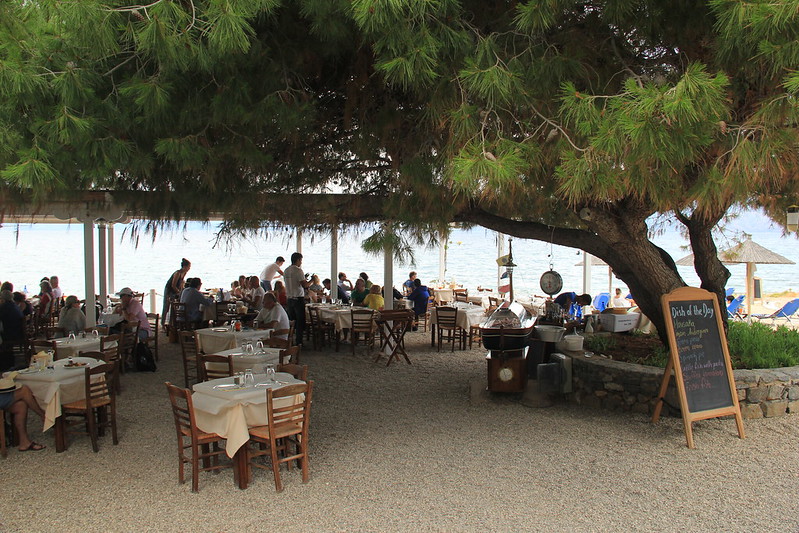 Take a Stroll to Mandraki

Walk just two kilometres from Hydra Town in the opposite direction and you’ll find an attractive little shingle beach overlooked by a cute little taverna.  I’m not sure about the food but the staff will happily serve drinks to you whilst you’re relaxing on the beach, or sitting on the end of the pier with your feet dangling in the cool, clear waters. 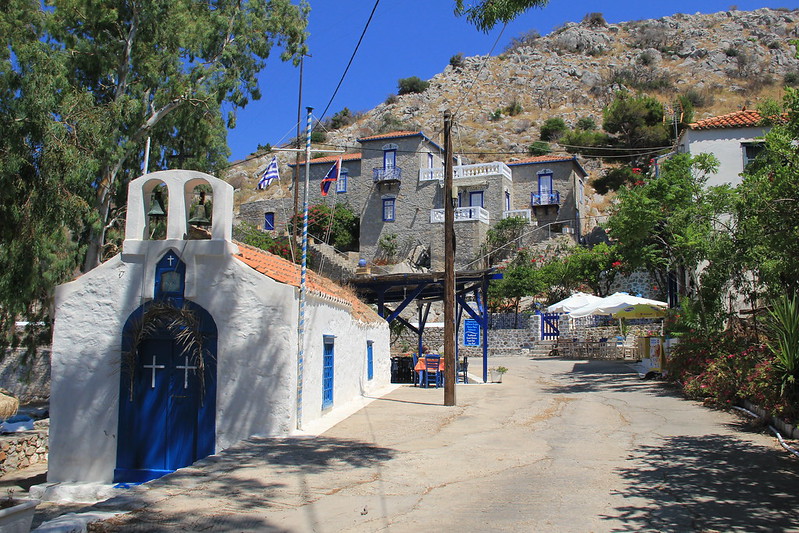 What I loved most about this little corner of the island was that everything was coordinated beautifully with the colours of the Greek flag – from the whitewashed church with its signature blue door, to the painted window frames and balconies on the stone buildings behind it.

Customers inside the taverna sat on wooden blue-coloured chairs and ate from tables covered with white tablecloths.  Even the sun beds on the beach were decorated with striped blue and white fabric. 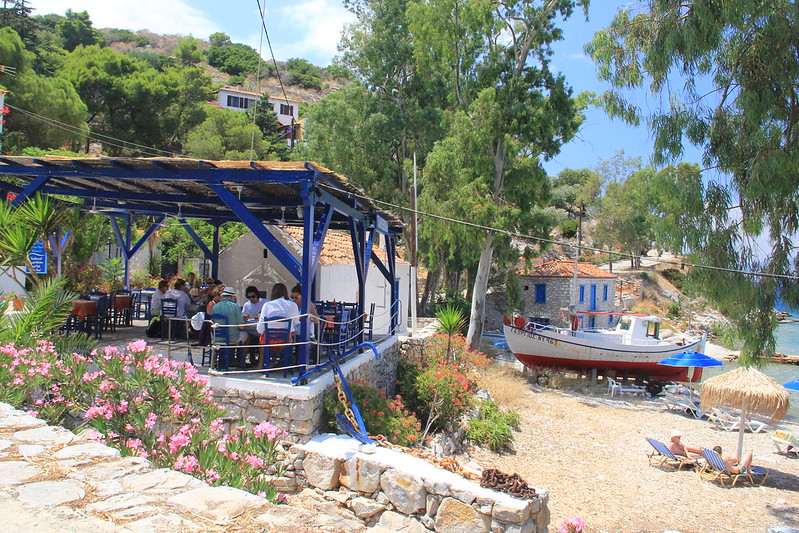 One evening we chose to sit on the walls of the old bastion, to the eastern edge of the port, and the next, on the eve of my birthday, we decided to go for sunset cocktails at the rather appropriately-named Sunset Bar and Restaurant. 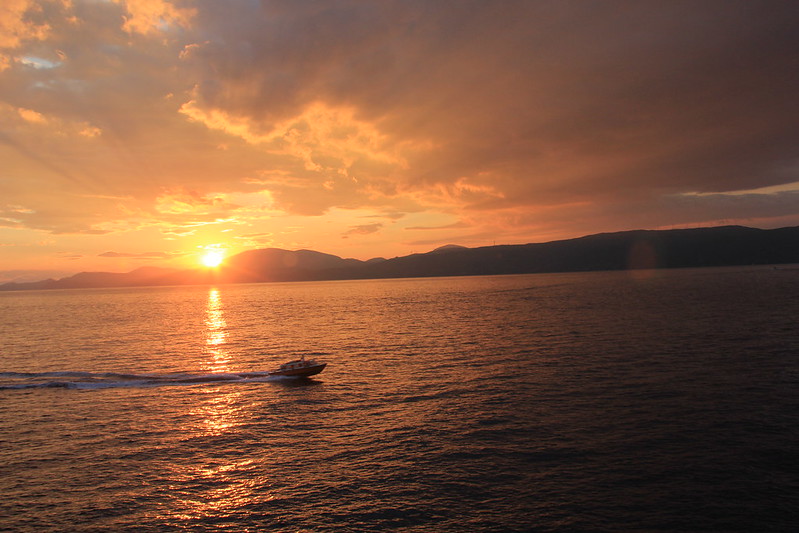 We originally tried to secure a table there for a meal (the restaurant comes highly recommended as much for the food it serves as for the views it affords), but – despite the fact that place was half empty for the entire duration of our mojito-drinking and photo-taking hour – the staff had informed us earlier that day that they were fully booked for the whole evening.

Whether or not you manage to eat here, I’d definitely recommend visiting for a drink or two whilst you watch the sun go down. 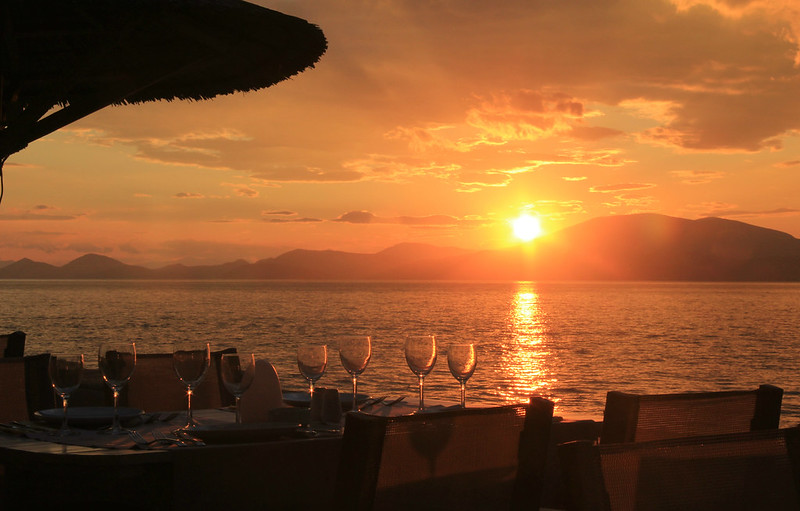 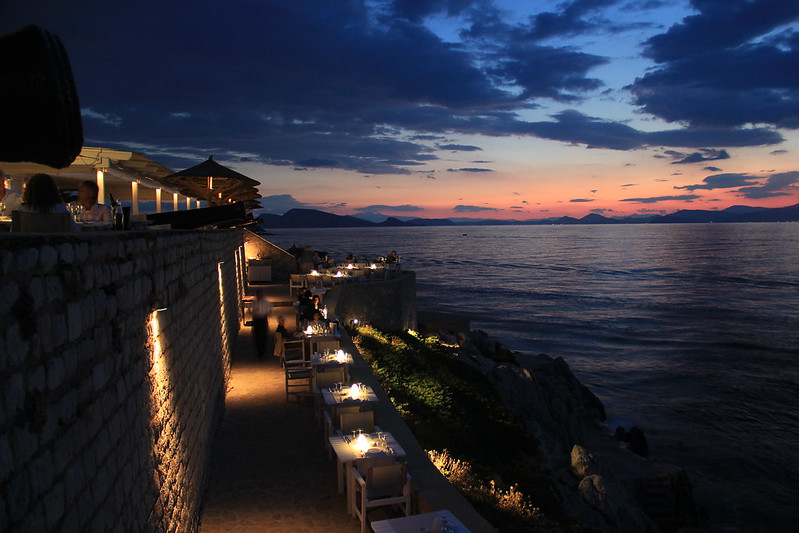 Stay in a Traditional Pension Away from the Harbour

The architectural preservation order that’s in place on Hydra means that almost all hotels occupy old stone buildings, so you won’t find any purpose-built apartment blocks with balconies and sea views.

This was one of the things that I loved most about this little Greek island.

What you will find though are a multitude of lovely little pensions with shaded gardens and outdoor seating areas tucked away in the town’s confusing maze of narrow cobblestone streets. 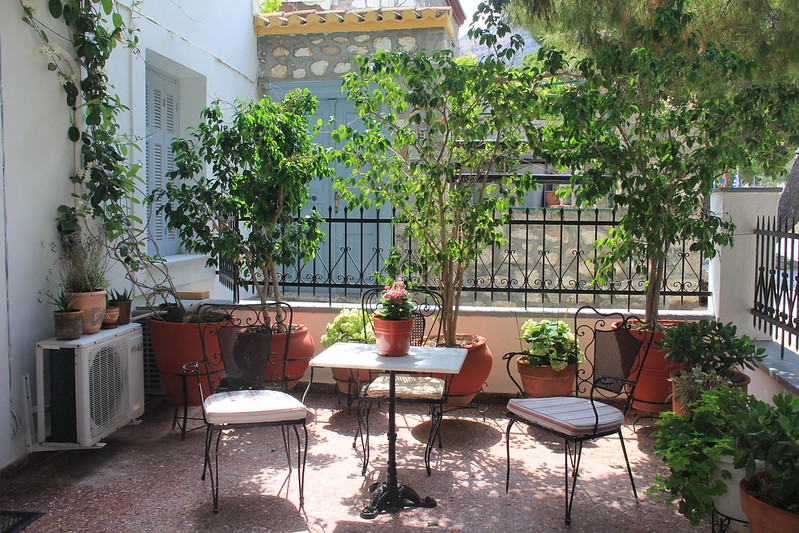 We stayed at the gorgeous Piteoussa Guesthouse, which was located on one of the tranquil backstreets just a few minutes walk from the harbour front.

It is possible to take one of the island’s numerous water taxis between resorts, but this can get expensive and from what I could gather there are no set timetables; the boats leave when they have enough passengers or enough money to make their journey worthwhile.  The only other options for getting around are donkey or those reliable old feet of yours.  Personally I like mine and use them as much as I can.

If you’re planning on hiking any further then Plákes though, I’d advise investing in one of these maps.  They cost very little and will save you a lot of time and hassle.  In hindsight, I wish we’d done so ourselves.

Getting To and From Hydra

Hydra is one of the most accessible islands near Athens.  There are a number of ferry companies who run the route between Hydra and Piraeus Port in Athens, offering several departures per day.  We booked ours through Viva Greece, although the prices are much the same across the board (approximately 25 euros each way).  Journey time varies between 55 minutes and one hour 55 minutes, depending on the route.

Have you visited Hydra before?  Do you have a favourite Greek island? 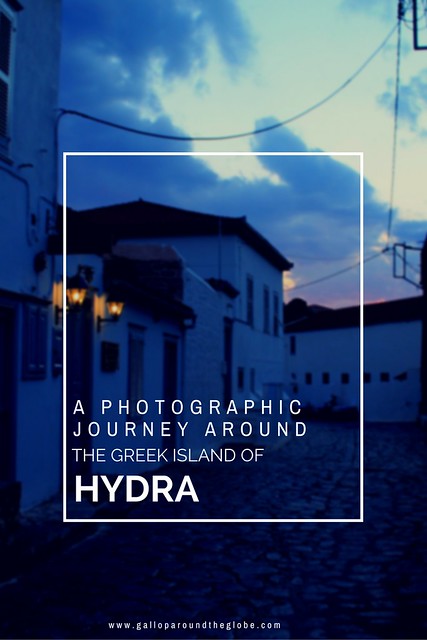 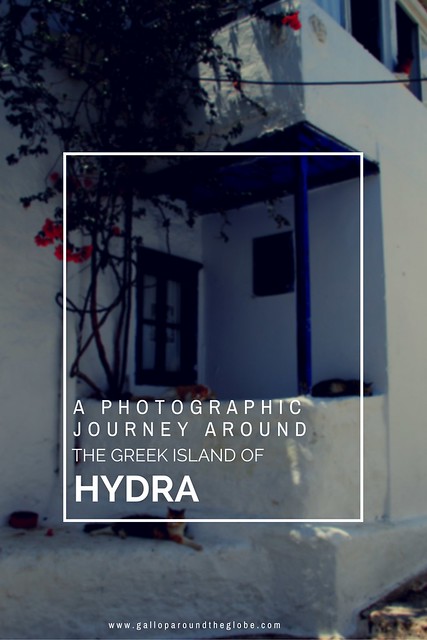 One Day in Bergen: An Itinerary of Things to See, Do and Eat | Gallop Around The Globe

Olot and the Extinct Volcanoes of La Garrotxa

UK Staycation Inspiration: A Few of the Best Hidden Gems in Cornwall

Staying Connected On The Road and A Giveaway!