The only reason I found myself in Thessaloniki was because the city is home to the closest and cheapest airport to fly to from the UK, in order to reach the incredible clifftop monasteries of Meteora.

Our flight was due to arrive at around 11am, so I factored in just one night in the city, in order to ‘have a quick look around’ before boarding a bus to Trikala the following afternoon, and then continuing on to Athens and Hydra.

What I hadn’t accounted for is that Thessaloniki is Greece’s second largest city, with a population of 325,182 inhabitants.  It was never going to be possible to simply ‘have a quick look around’.  I’d also overlooked the possibility that Thessaloniki might actually be worthy of more than 24 hours of my time.

Thessaloniki has an attractive cafe-lined waterfront, and more notable Byzantine monuments and Ottoman structures than you can shake a stick at.   Its large university population (the city’s main university, Aristotle University, is the largest in Greece and the Balkans) also means that the city is boasts a vibrant, famously avant-garde music, arts and entertainment scene. 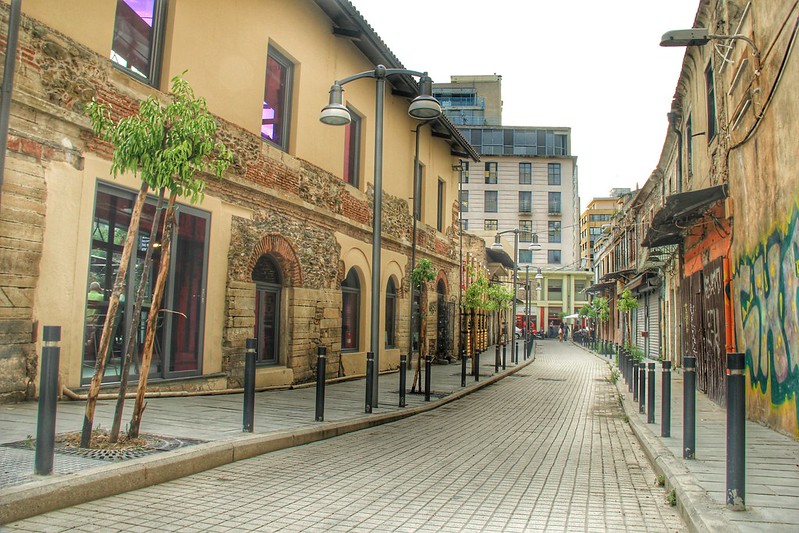 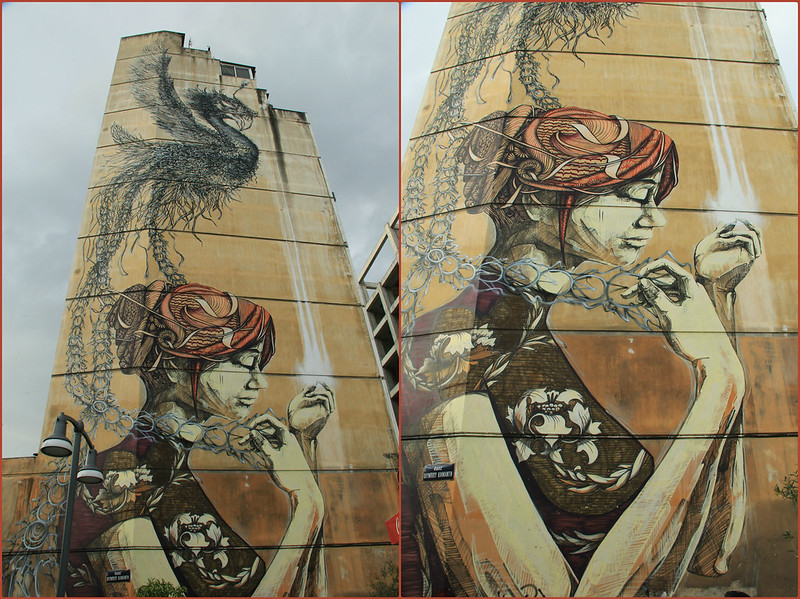 National Geographic Magazine included Thessaloniki in its Top Tourist Destinations Worldwide in 2013, and after just a few hours in the city, it’s very easy to see why.

I’m sure there are many lovely places to stay here, but if you’re overwhelmed by the choice I can thoroughly recommend Colors Budget Luxury Rooms and Apartments as a great base from which to explore Thessaloniki.  The property is modern, bright, clean and quirky, and the staff went out of their way to help make our stay (and onward journey) as comfortable and hassle-free as possible.

They booked our onward train travel to Trikala and printed our online receipts off for us, to save us time and trouble at the station, they gave us a large bottle of water for free when we asked if it was possible to purchase one, and they donated a small tube of Fenistil Gel when they noticed the swollen red mosquito bites all over my arms on the morning after our overnight stay.

I’ve never felt more welcome anywhere when I’ve stayed for such a short space of time.

We were just a 10-minute walk from Aristotelous Square on Thessaloniki’s waterfront, and surrounded by historical monuments, street markets, and an overwhelming choice of inviting cafés, bars and restaurants. 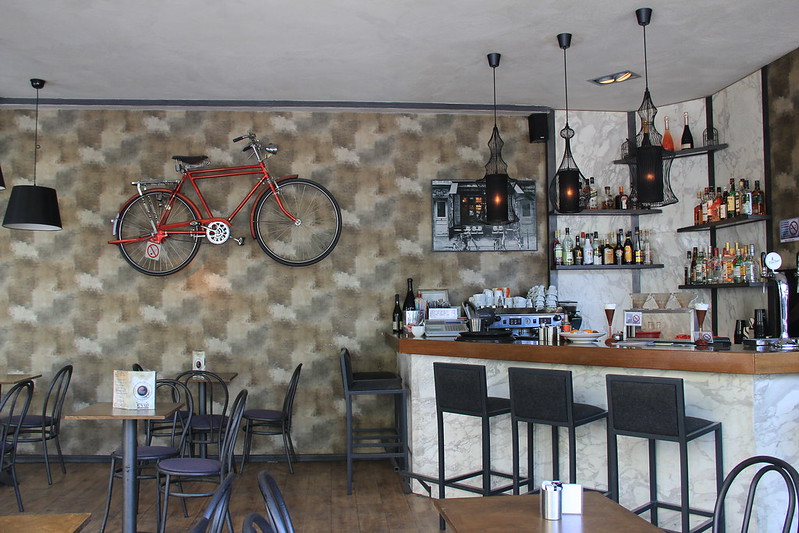 As we live a 2-3 hour drive from the coast in our hometown of Shrewsbury, one of the first activities we chose to do when we arrived in Thessaloniki was to head to the seafront and take a walk alongside the ocean.

Starting at Ladadika, we followed the water’s edge in the direction of The White Tower and Alexander’s Garden (turn left if you’re facing the ocean). 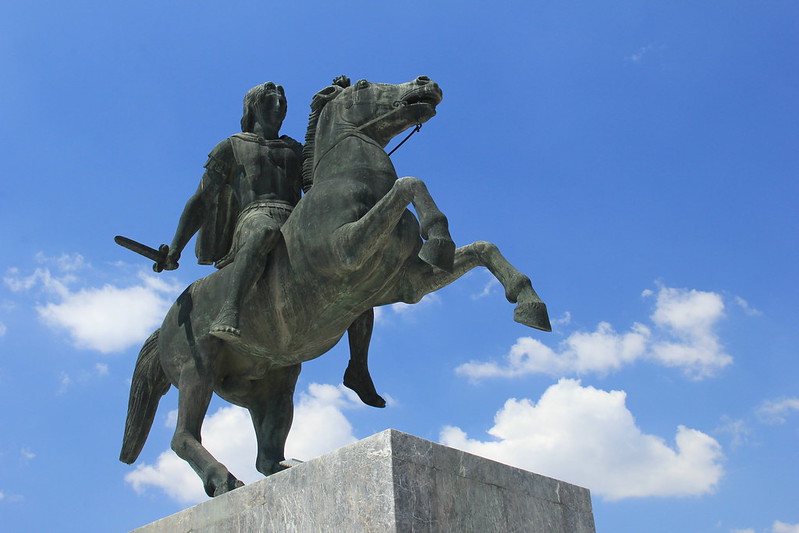 Built in the 16th century as part of the city’s defence walls, and later used as an Ottoman prison and place of execution, The White Tower is probably the most recognisable landmark in Thessaloniki.

It is unfortunately no longer white (the result of restoration work in 1985), but is still a fairly impressive structure that now houses the city’s Museum of History and Art.

You can even climb six floors up the steep winding staircase for a fantastic view of the city and harbour.

Continue a little further along and you’ll come to a wooden boardwalk upon which you’ll see students lounging by the water’s edge, couples with their arms draped around each other, and dogs basking in the heat of the afternoon sun. 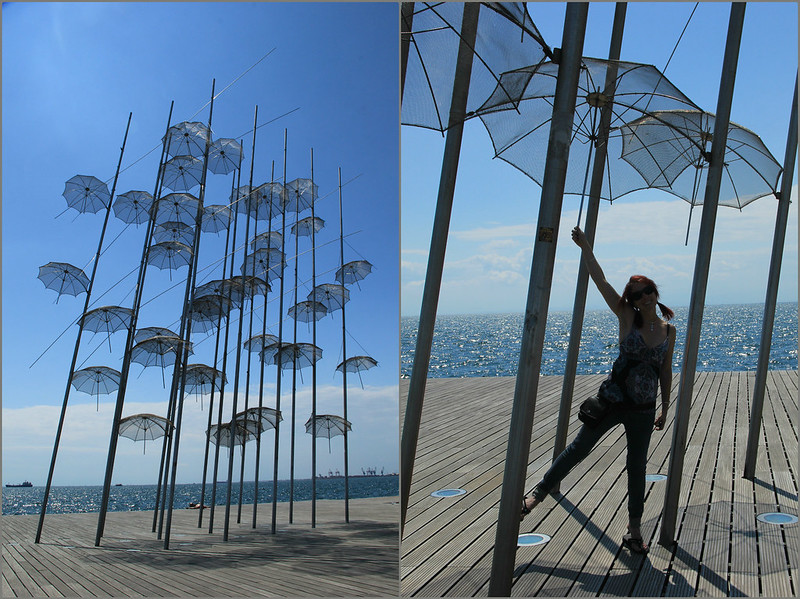 You’ll also find a steady stream of tourists vying for a photograph underneath this amazing sculpture.

Especially if you return at sunset. 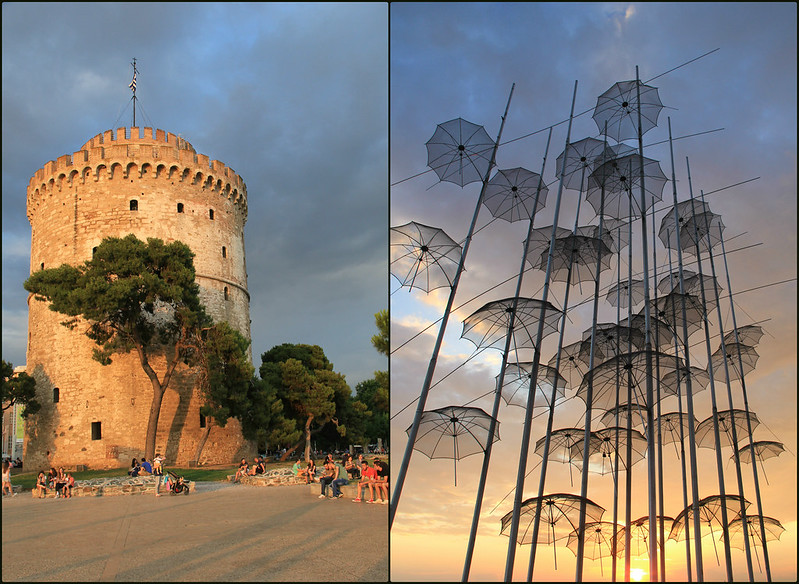 After dark Thessaloniki really comes alive.  Head back down to the Old Port at Ladadika where you’ll find a collection of old stone warehouses that have been converted into some of city’s coolest sea-front tavernas and watering holes. 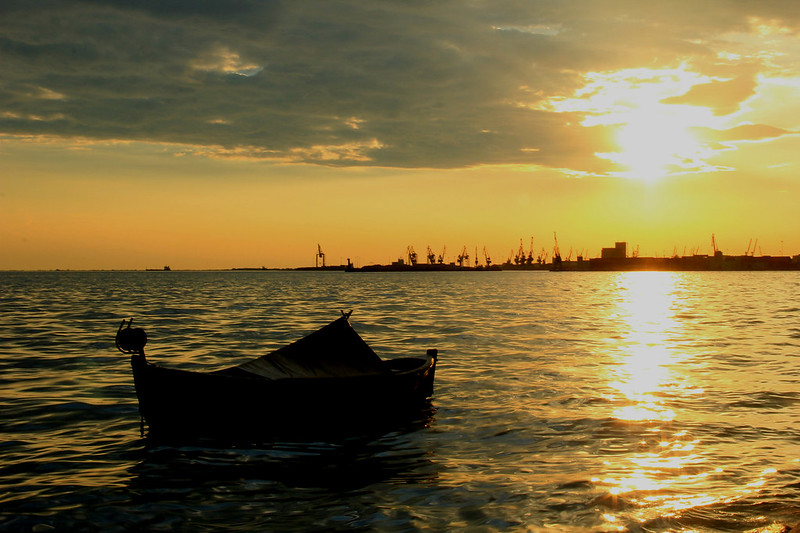 We stopped for a drink at The Kitchen (which is also a restaurant; book ahead if you want to secure a table), and whilst I did feel a little under-dressed for a Friday night (we’d brought hand luggage only, so no room for separate daytime and evening outfits), I can picture it being the perfect spot to grab a bite to eat or for cocktails with the girls.

As we wandered back inland, weaving our way through the city’s ancient streets in the direction of our hostel, we came upon some live hip-hop being performed on a makeshift stage.  We ordered a drink at one of the local bars and joined the crowds of revellers filling the streets outside, and it was exactly at that point that I remember thinking,

The next day, feeling a little fuzzy-headed, we ventured out to explore a little more of the city on foot. 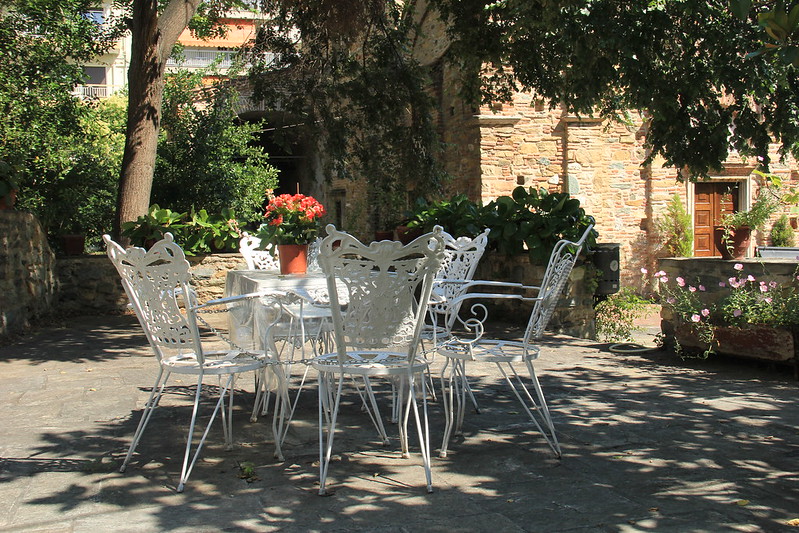 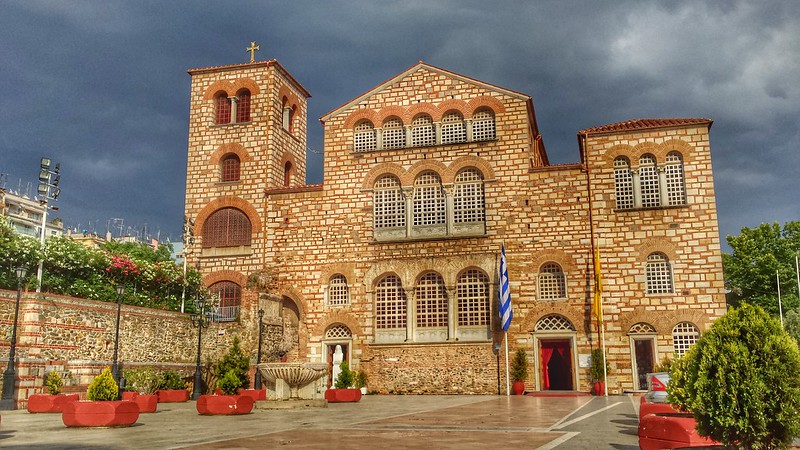 We stopped by many of its Byzantine, Roman, and Ottoman monuments, our favourite of which was the Greek Orthodox Church of Agios Georgios (otherwise known simply as The Rotunda).  The cylindrical structure was built in 306AD on the order of Roman Emperor, Galerius, but after his death in 311AD, it stood empty for some time until it was converted into a Christian church in the fourth century.

Its walls are more than six metres thick, meaning that it’s managed to withstand many of Thessaloniki’s earthquakes.  You’ll also find some scattered fragments of the high quality mosaics that once embellished its interior walls.

The grounds are overgrown and unkempt, but that was part of The Rotunda’s appeal for me, as was the fact that visitors to the church seemed few and far between.  It felt like a truly serene and undiscovered part of the city. 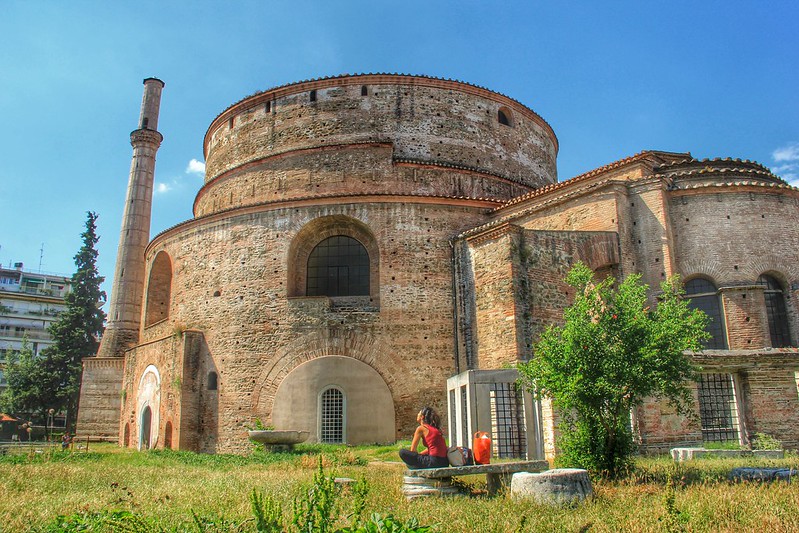 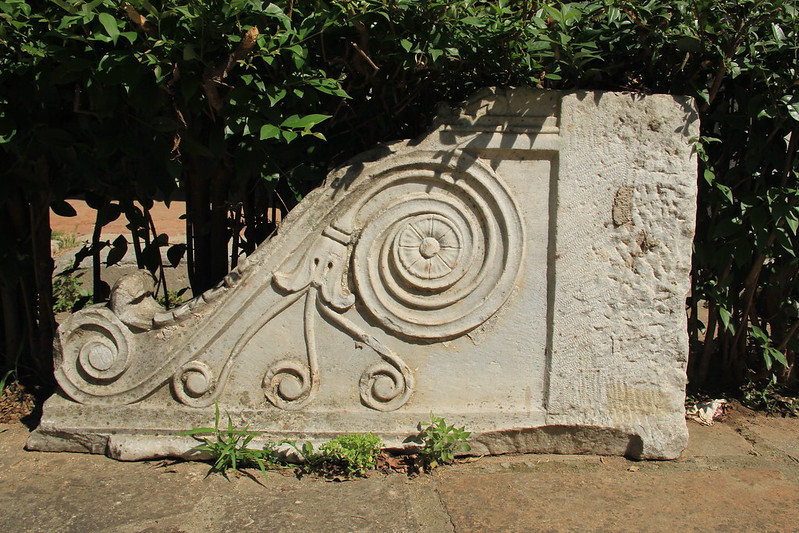 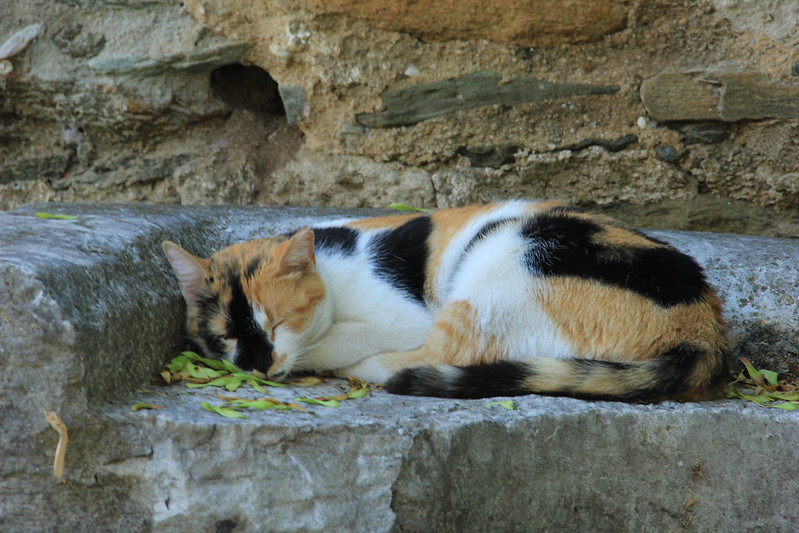 As you wander around the centre of Thessaloniki, you’ll notice evidence of the city’s 2000-year old history at every turn, but you’ll also notice its interesting mosaic of cultures and its colourful urban vibe.

Before we made our way to the train station we had just enough time to grab a delicious sea food lunch (which came with a free mezzé of tasty Greek desserts and a complimentary glass of rakomelo) at Fruitti Di Mare, a lovely little restaurant with outdoor seating on a sheltered tree-lined avenue that runs parallel with the ruins of one of the city’s ancient Byzantine churches.

As we sat there munching our way through fresh octopus and the nicest prawn saganaki I ate on our whole trip, I reflected on my all too brief time in the city.

Thessaloniki is somewhere that you can spend the morning wandering through the grounds of 2000-year old historical monuments, the afternoon browsing colourful market and boutique gift shops, and an intriguing display of interesting sculptures and edgy street art, and the evening dining on some quality contemporary Greek cuisine on the seafront followed by a cold beer, some beats, and a spot of live hip-hop to keep you entertained until the small hours.

It’s a city with a historical heart, and a young, creative mind.

The Colourful, Rambling, and Mysterious Streets of Ancient Porto