The Colourful, Rambling, and Mysterious Streets of Ancient Porto

I live in Shrewsbury, in central England, so there are a number of airports that are easily accessible options for me to travel to. Birmingham would be my preferred departure airport (it’s just over an hour away on the train and the fare will set me back the very affordable sum of £16.30 for a return journey), but I also regularly fly from Manchester, Liverpool, Heathrow and Gatwick.

Although the London airports can be a 3-4 hour train journey from Shrewsbury, advance fares are available from Shrewsbury to London Euston, so it can cost as little as £12 for a return train fare.

After my birthday trip to Greece at the end of June, I hadn’t flown anywhere for a good couple of months (travelling anywhere during school holidays is expensive, so I generally choose not to; I’m also not a big fan of sharing my space with badly-behaved children) so by the middle of September I was in desperate need of another holiday!

So, my search for a short getaway before the autumnal English weather (read: low temperatures, wind, rain and fog) set in, started with Skyscanner.

I soon realised that the end of September/beginning of October was not as cheap a time to travel as the end of March had been.  Whereas in March I had the option of travelling to Fes and Chefchaouen, Helsinki and Tallinn, or multiple locations in Spain for eight nights for under £200, finding a four night trip for less than this was proving troublesome.

Having juggled around with various flight and accommodation options, I finally found a couple of destinations for around the £150 mark – Copenhagen, Denmark, and Porto, Portugal’s second city. 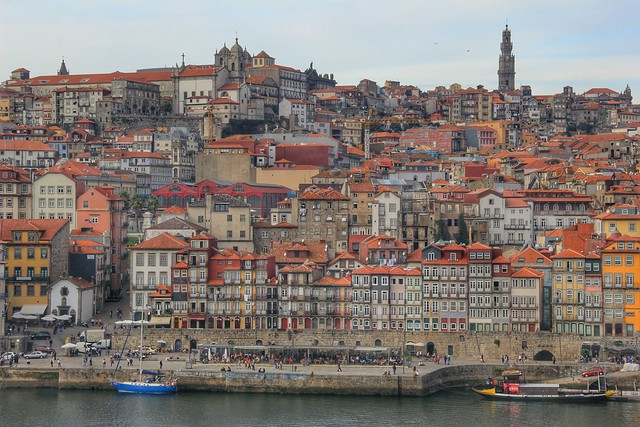 Much as I’d like to return to Copenhagen (my first holiday abroad when I was 11 years old incorporated a visit there), I didn’t really fancy travelling somewhere that was going to be significantly colder than it already was in England.

So we settled upon Porto and we managed to find flights that fitted in with the dates we’d chosen by using Kayak‘s incredibly useful function that incorporates nearby airports into your departure and destination search.  We were able to fly out of Liverpool with Ryanair and back into Manchester with Easyjet.  Boom!

Accommodation was a little easier to find.  One of my favourite accommodation booking websites booking.com had an apartment rental (private room, shared facilities) in the Bolhão neighbourhood (popular for its markets and old-school grocers, as well as plentiful boutiques and bars) for just £73 for four nights – for two of us!

To be completely honest, I didn’t know a lot about the city before arriving, but the photographs I’d seen Pete and Dalene Heck posting just days before my arrival, were enough to convince me that it was somewhere I was going to enjoy.

Located along the Douro river estuary in Northern Portugal, Porto boats one of the oldest European centres, and its historical core was proclaimed a World Heritage site by UNESCO in 1996.

Although it may not be one of Europe’s prettiest cities (many of Porto’s oldest houses are at risk of collapsing, largely due to the fact that its young, affluent inhabitants have fled to the sprawling suburbs by the sea), its appearance has improved greatly since 2001, when it was declared European City of Culture. 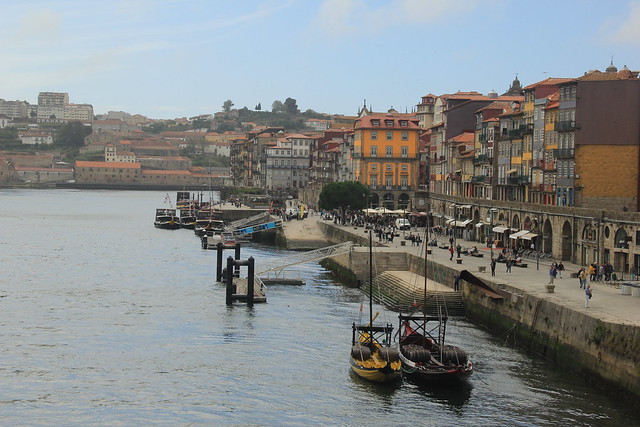 In the riverside neighbourhood of Ribeira many of the streets and squares have been reconstructed and historic buildings restored, but wander a little further away and that colourful, tumbledown character still remains.

Yes, photographing Porto is a lot more challenging than it would be in a city like Prague, but that fact held a certain appeal for me.  It made me look at the city’s buildings and streets in a lot more detail; it encouraged me to delve beneath the surface of their initial appearance. Here are a few interesting facts I learned and delights I discovered in Portugal’s fascinating second city.

In Portuguese the name of the city is spelt with a definite article, “o Porto” (English translation: The Port). Consequently the name ‘Oporto’ evolved from a misinterpretation of the oral pronunciation of the city’s name.

Whilst we’re on the subject of names, the name ‘Portugal’ actually derives from the name of an early settlement located at the mouth of the Douro River, called Cale, which was renamed ‘Portus Cale’ – The Port of Cale.  During the Dark Ages, the region became known as ‘Portucale’, which then morphed into ‘Portugale’ during the seventh and eighth centuries.  I think the ‘e’ was dropped some time within the 11th or 12th century. 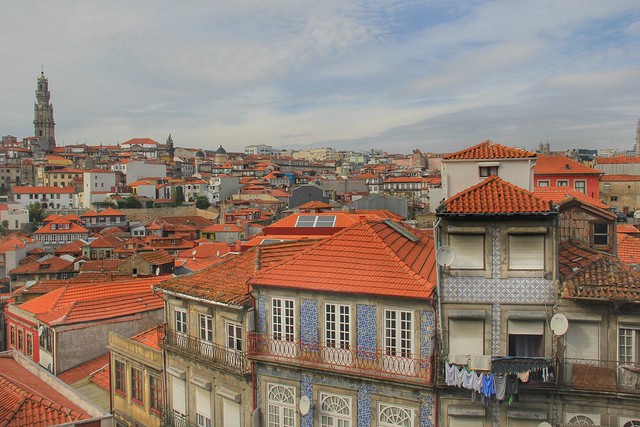 My parents had asked me, prior to my visit to Porto, whether the city used to be the old capital, with a name so similar to that of the country it’s in.  The answer (if you’re both reading) is yes, but only because the area of land that was then known as Portugal did not incorporate Lisbon; Portugal conquered Lisbon at a later date.

Although very different in all other aspects, like Lisbon, Porto is hilly.  Almost as soon as you leave Cais da Ribeira and walk away from the river, you start climbing, and if you’re staying in Bolhão (as we were), you’d better hope your calves are up to the hike!

If you want to make it up to Sé (Porto’s cathedral and its crowning glory), you’d better be fit – or be prepared to take lots of breaks. 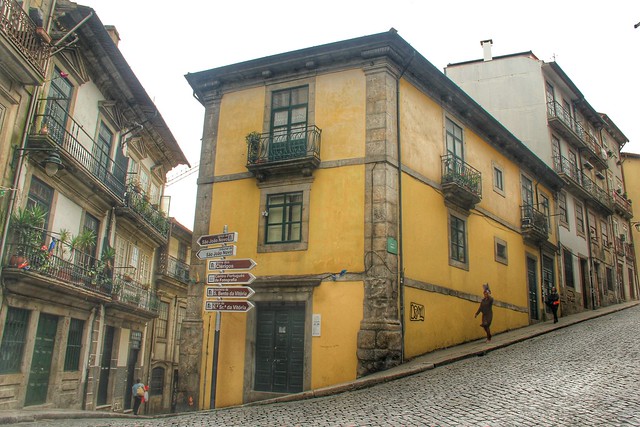 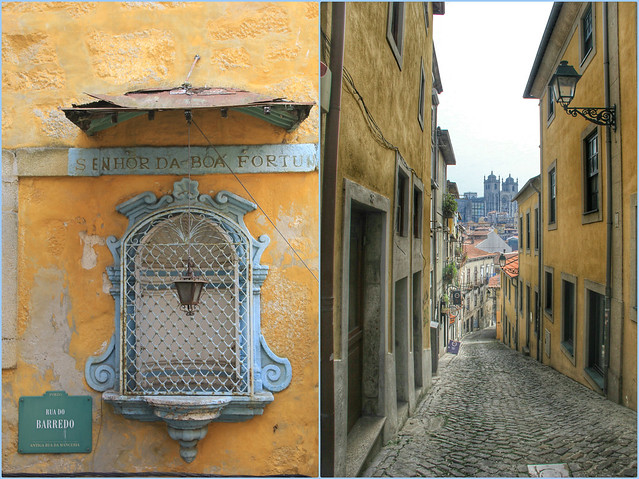 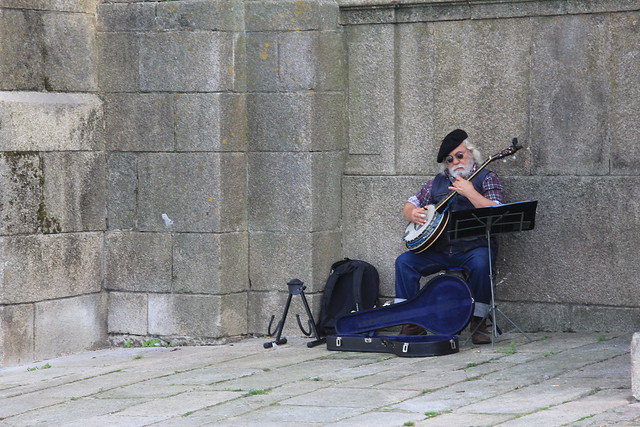 Whether its the crumbling facades of the city’s once grand buildings, or the street art, shop windows and inviting cuisine, Porto is full of colour – even when it’s cloudy. 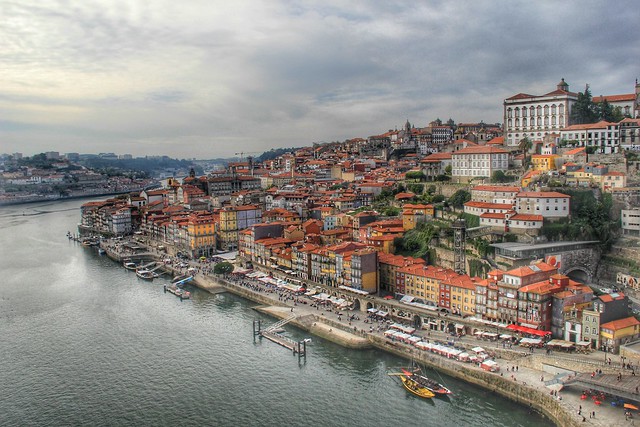 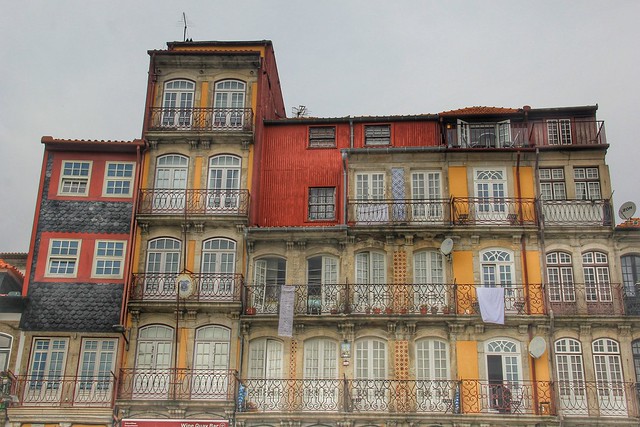 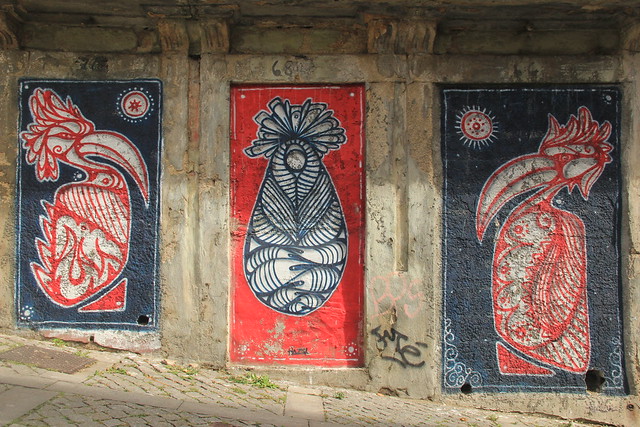 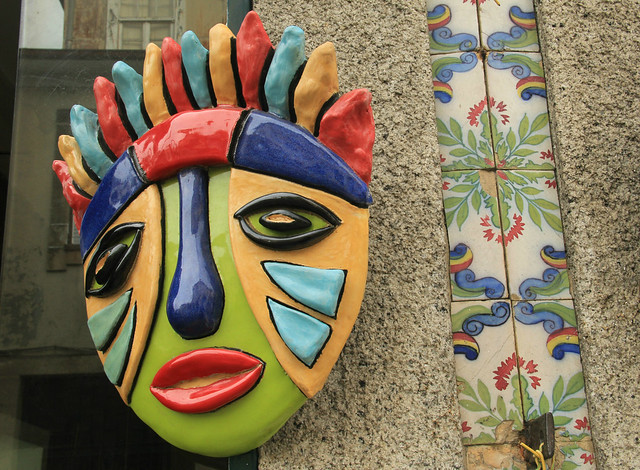 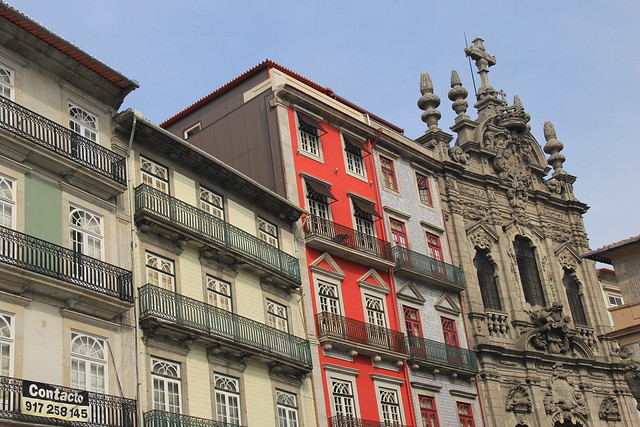 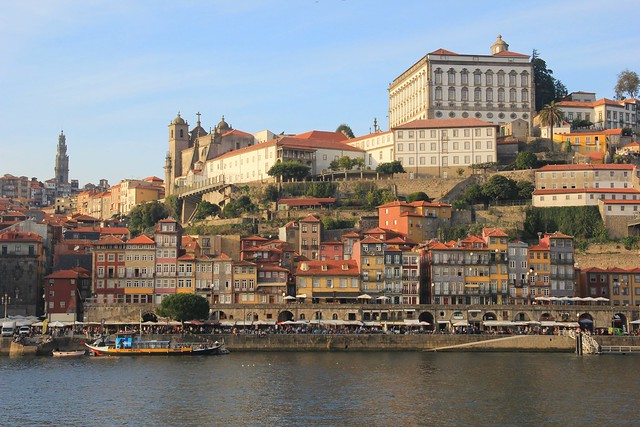 Azulejos (hand-painted tiles) greet you on almost every corner in Porto.  The Portuguese word ‘azul’ is exactly the same as the Spanish, meaning ‘blue’, because that is the primary colour used in most of the tiled mosaics you’ll see around the city.

You’ll find them across the facades of houses, the walls of cafes and bars, the tunnels of metro stations, and the opulent interiors of churches. 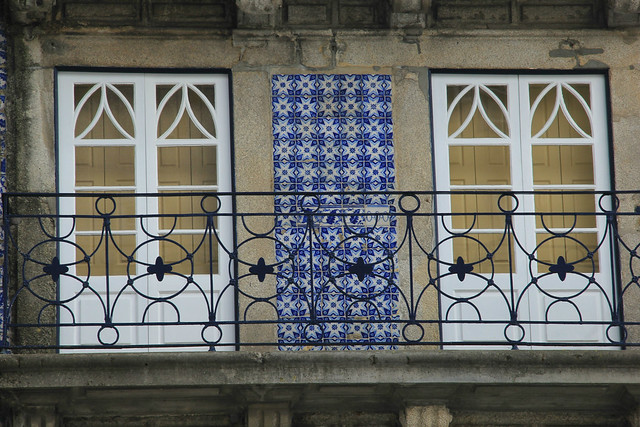 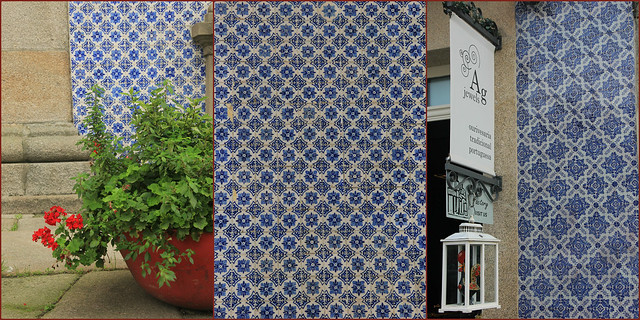 As soon as we arrived into Porto and exited Bolhão metro station (which was just around the corner from our apartment), we were greeted with the beautiful azulejos-covered facade of the Cappella das Almas, which depicts scenes from the lives of various saints.

Again, just down the road from the cafe at which we stopped for breakfast on our first morning in the city, was yet another stunning example of azulejo art.  The Igreja do Carmo dates back to the 18th century and is the focal point of the attractive square on which it sits.

It’s also worth checking out the beautiful interior of São Bento Train Station and the stunning Igreja de Santo Ildefonso (both pictured below). 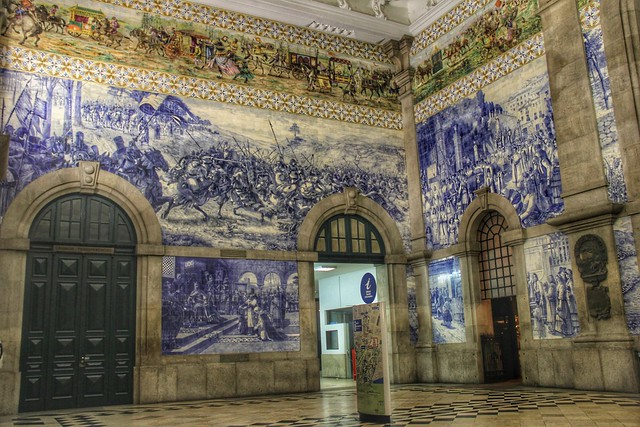 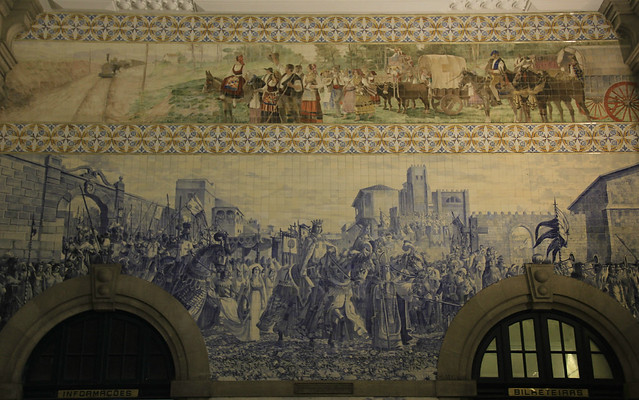 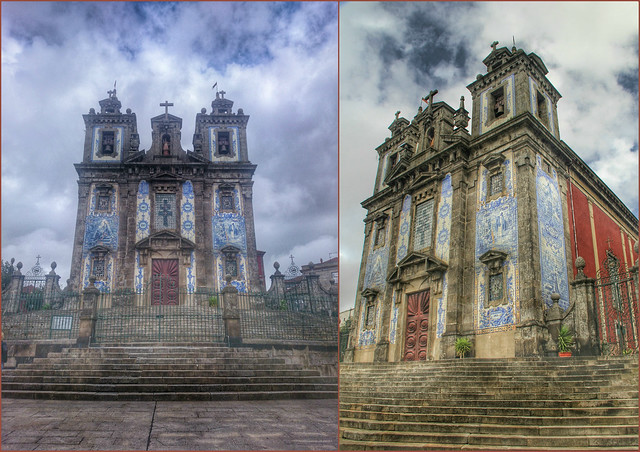 Porto inspired many scenes depicted in the Harry Potter series

JK Rowling lived in Porto between 1991 and 1993, working as an English teacher at a local language institute, whilst simultaneaously writing the first draft of The Philosopher’s Stone.

Wandering through the crooked, lantern-lit streets of old Porto at twilight, you’d easily be forgiven for thinking you’d just walked on to a Harry Potter set. The 1906 neo-gothic bookstore, Livraria Lello, and it’s grand, ornately carved wooden ceilings and twisting staircase, bears a striking resemblance to the one described in Harry Potter.

It’s now a popular tourist attraction as a result, with queues of visitors snaking down the street outside.  Free at the time of writing of the latest Lonely Planet publication (as recent as September 2015), entrance to the bookstore now costs €3 per person.

I really wanted to have a peek inside, but was reluctant to pay any amount of money to simply enter what is essentially just a bookstore.  The queue of people put me off too.  I wanted to have a place like that completely to myself; I wanted to be able to get lost in the realms of my imagination, amidst, mysterious twisting staircases, dusty books, spells, and wizardry.

Quaint little grocery stores like this one really do still exist 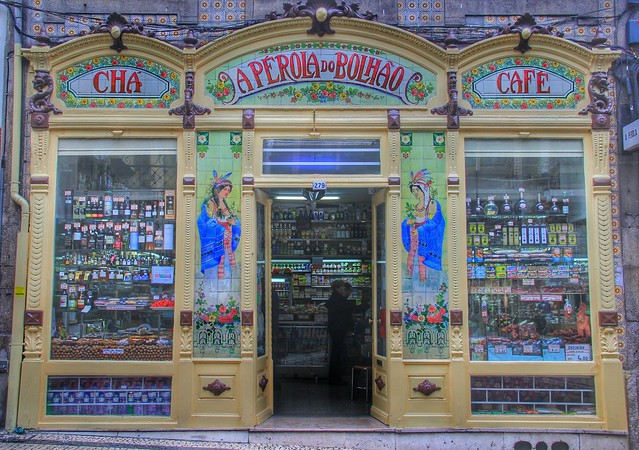 In fact, the streets surrounding Bolhão metro station are full of them, but this one really caught my eye.  I can imagine that it still looks much the same as it did several centuries ago.

It’s the birthplace of Port

Ok, I’ll admit that I did already know that one, but even today Port wine remains one of the city’s most famous exports.  Across the river from Ribeira, in the Vila Nova de Gaia neighbourhood, you’ll find a multitude of Port cellars dotting the hillside. 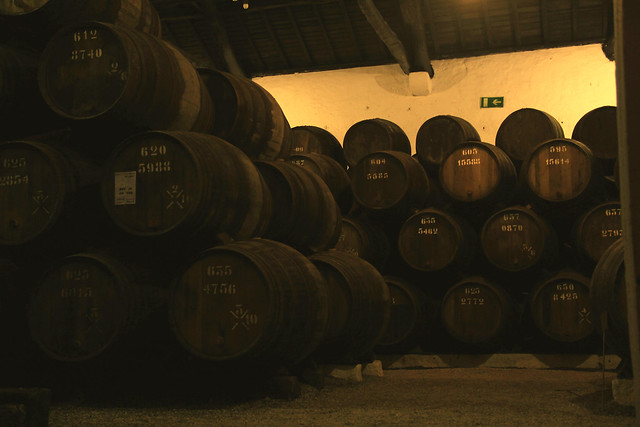 Port wine production dates back to the 17th century, when British merchants reportedly added a dash of brandy to the grape juice in order to preserve the wine for shipment back to England.

Grapes are harvested by hand in autumn and immediately crushed – often still by foot, as this is considered to be a more gentle (and therefore better) way to extract aromas, and subsequently produces wines with balance, structure, and depth of flavour.

There are a number of different companies who offer 30-minute to one-hour tours which include a tasting of some of their best port wines. 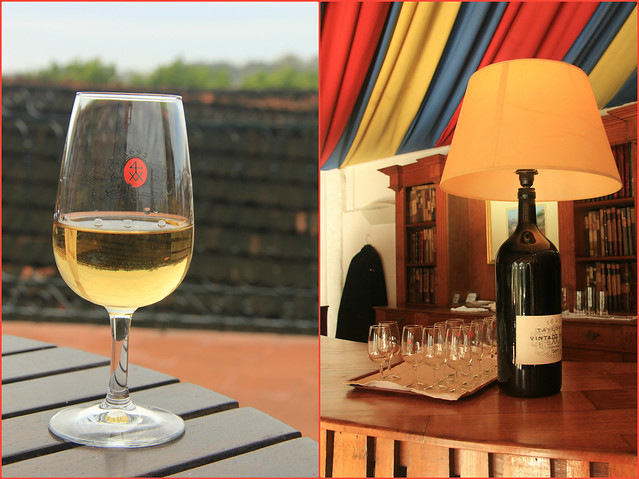 We chose Taylors, for no reason other than the fact that they’d been recommended to us by the couple on our off-road Porto Mountain Tour the day beforehand.

Our guide was enthusiastic and knowledgeable, and I loved learning about the processes behind the port wine production.  There’s also an attractive terrace with stunning views across the river. 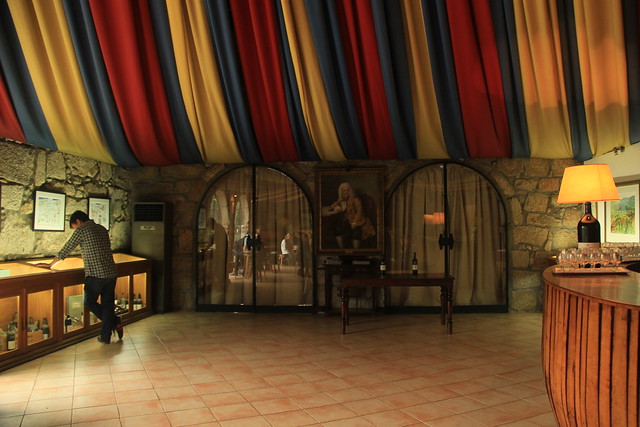 The food here is good!

With the Atlantic Ocean on the doorstep, the fertile Douro valley not far away, and the high dairy county of the Trás-os-Montes rolling out to the east, Porto has all the ingredients required to cook up some stunning plates of food.   Don’t leave without sampling some fresh seafood and local cheeses. Our favourites, of the places we tried (and there are so many more that we didn’t!), are: 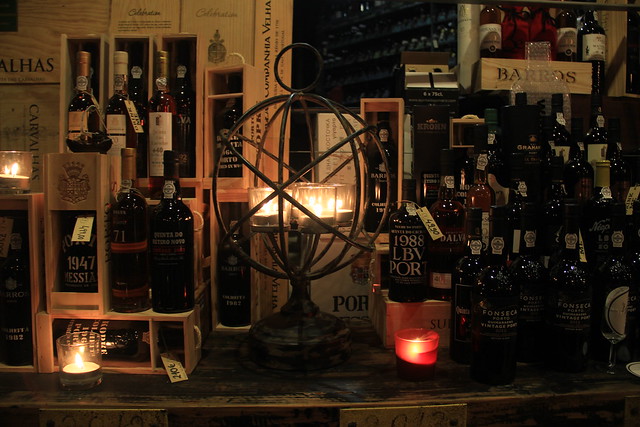 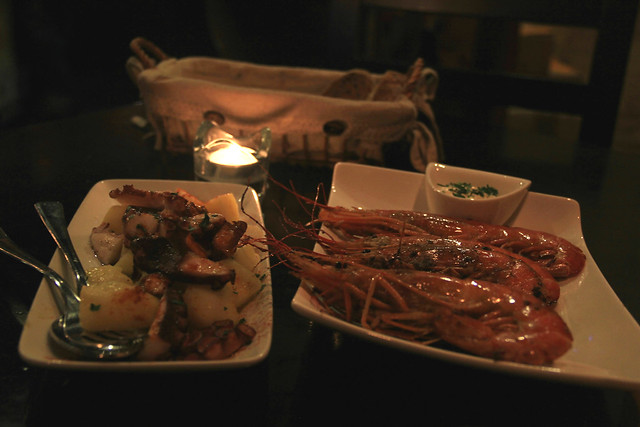 Only three lines still run today, but for the reasonable price of €2.50 you can take a rickety ride back in time whilst marvelling at some wonderful city sights along the way.

We didn’t have time in the end, but we wanted to hop aboard this tram that stops right outside the Igreja de São Francisco, and continues along the riverfront to Passeio Alegre in Foz do Douro. 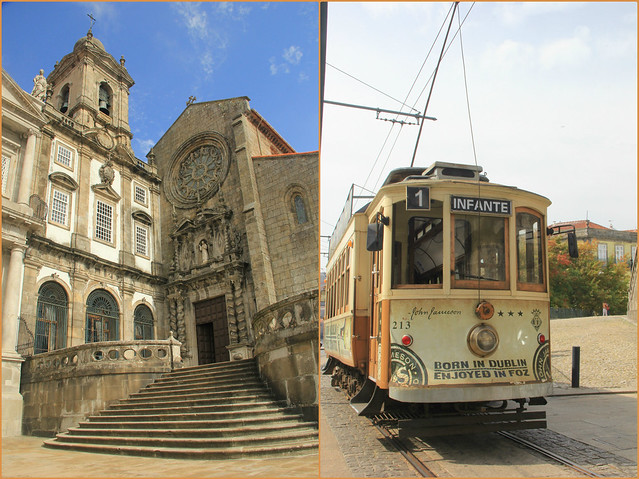 Even in spite of the clouds and the thunderstorms and the 24mph winds, we had a fantastic few days in Porto.  I’d definitely like to come back, but maybe in the summer next time 😉 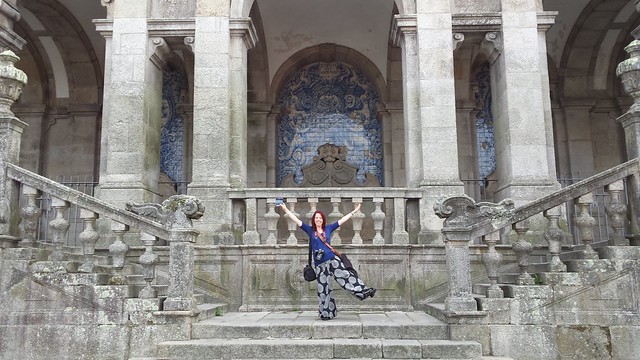 Have you visited Porto before?  What did you think of the city? 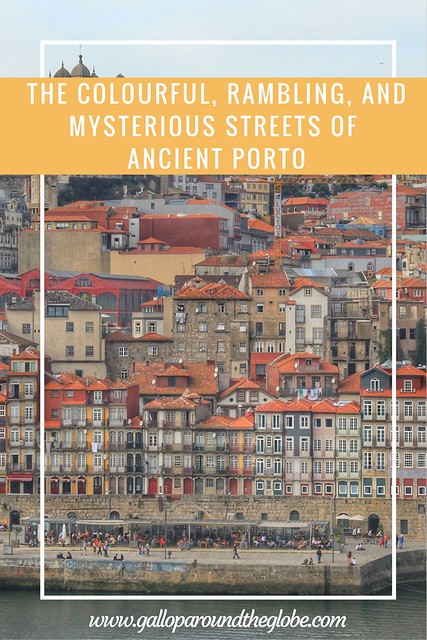 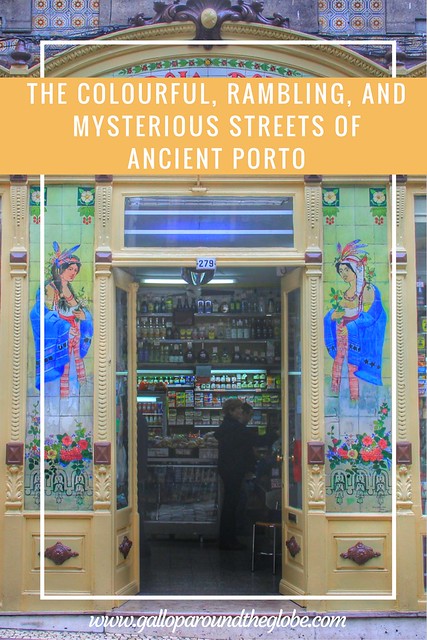 Exploring Puglia on Two Wheels: A One Week Puglia Itinerary

How to Seek Out the Best Photo Spots on São Miguel, The Azores

Flamenco, Tapas, and….Skiing? Yes, you can go skiing in Spain