Of all the things to do in Granada, exploring the city’s old Arab quarter is my absolute favourite.  Find out more about Granada’s Albayzín in this post.

I first visited Granada in early 2007.  Stu’s father was currently living in the small (there are just 256 inhabitants) Spanish village of Murchas, located in the Lecrín valley, just 32 kilometres from the city.

We spent the week skiing up in the nearby Sierra Nevada mountains, visiting the Alhambra, eating some delicious home-cooked Spanish food, and wandering through the intriguing maze of cobblestone streets that make up Granada’s ancient Arab quarter – the Albayzín. 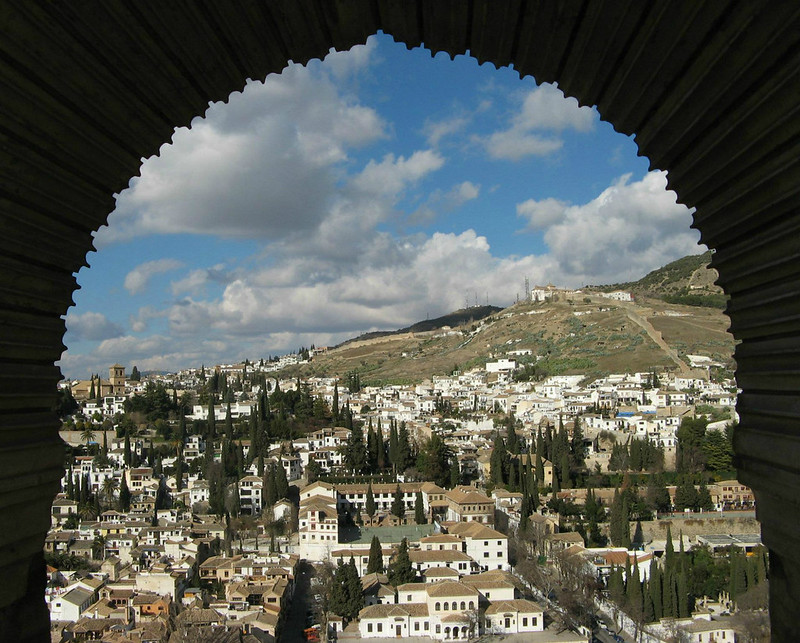 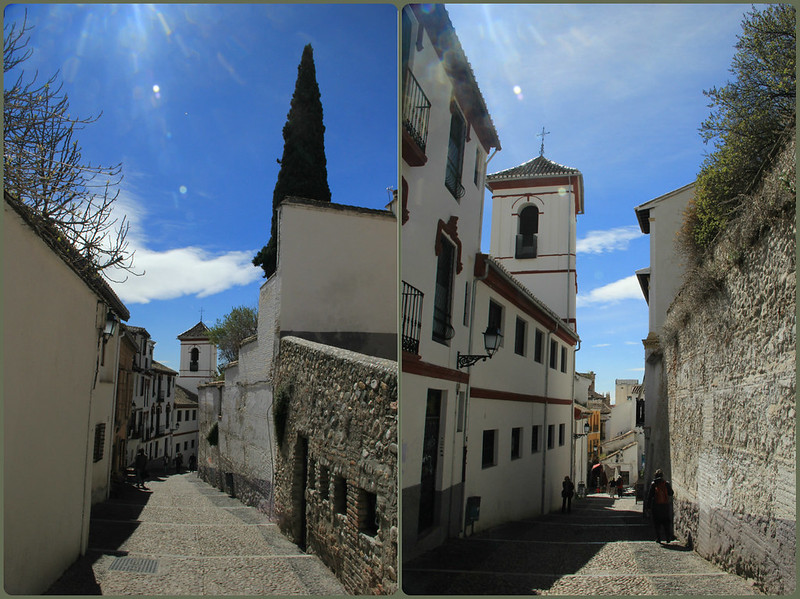 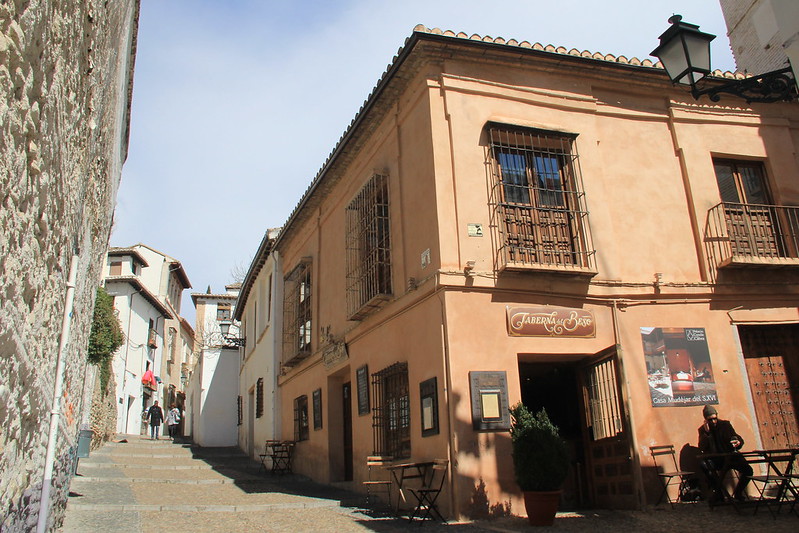 It was Spain like I’d never seen or imagined it before.  Teterías (tea shops) could be found alongside traditional tapas bars, and the inviting aromas of Moroccan spices and sweet sheesha smoke blended with the pungent (but not unpleasant) smell of cheese and cured jamón. 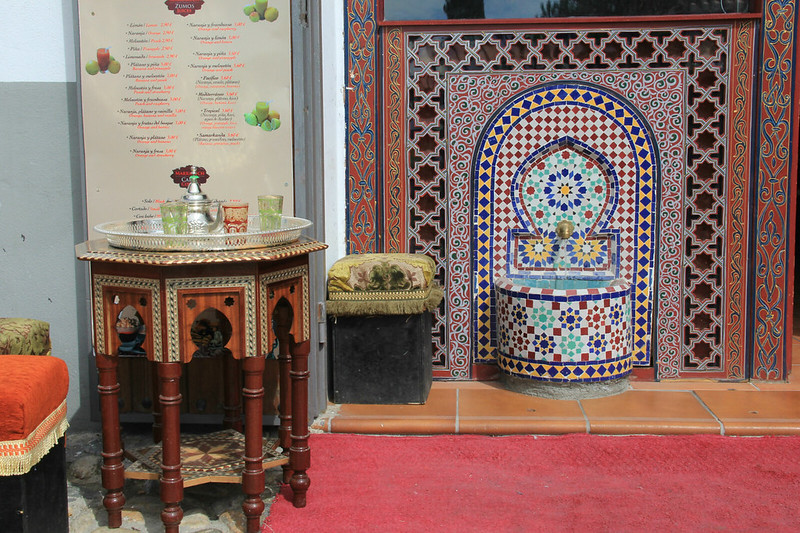 The quintessentially-Spanish white-washed buildings with wrought iron balconies containing colourful pot plants gave way to the odd mudéjar-style doorway or arch, with intricately-detailed mosaics and a distant sense of the rich history they once embodied. 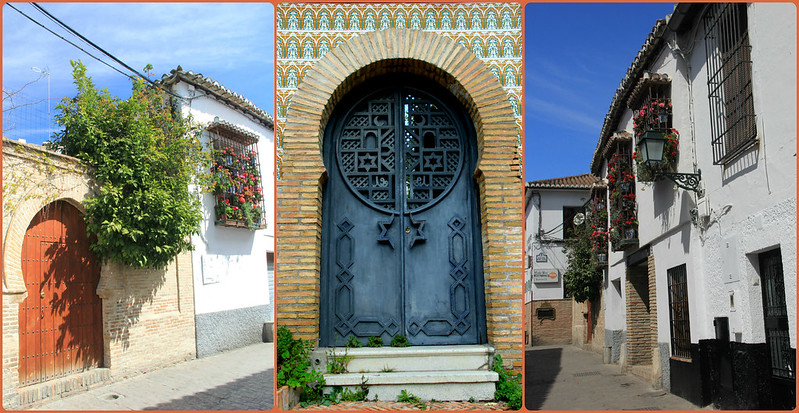 The Albayzín was declared a UNESCO World Heritage Site in 1994, along with the Alhambra and the Palacio de Generalife, so development within this neighbourhood is strictly monitored, meaning that structurally it has changed very little over the years.

I’ve visited Granada four times now since my original introduction to the city (a visit normally combined with a few days skiing or boarding up on the slopes of the Sierra Nevadas) and wandering through the timeless streets of the Albayzín is one of my favourite pastimes.  Although parts of it are comfortingly familiar, there are so many different twists and turns in this confusing network of cobblestone lanes and alleyways, that every meander yields a new discovery. 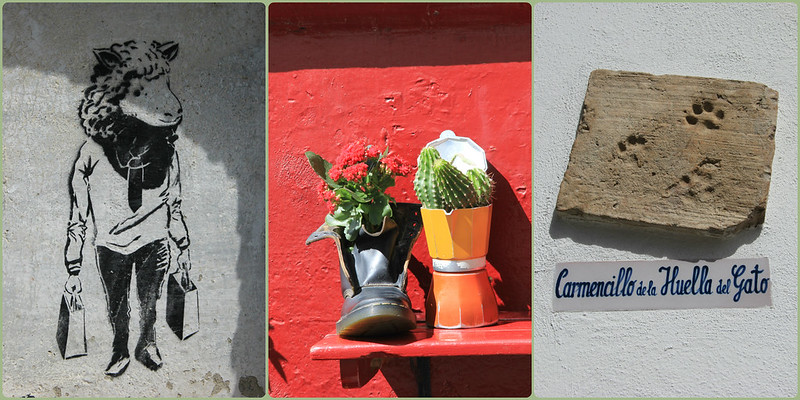 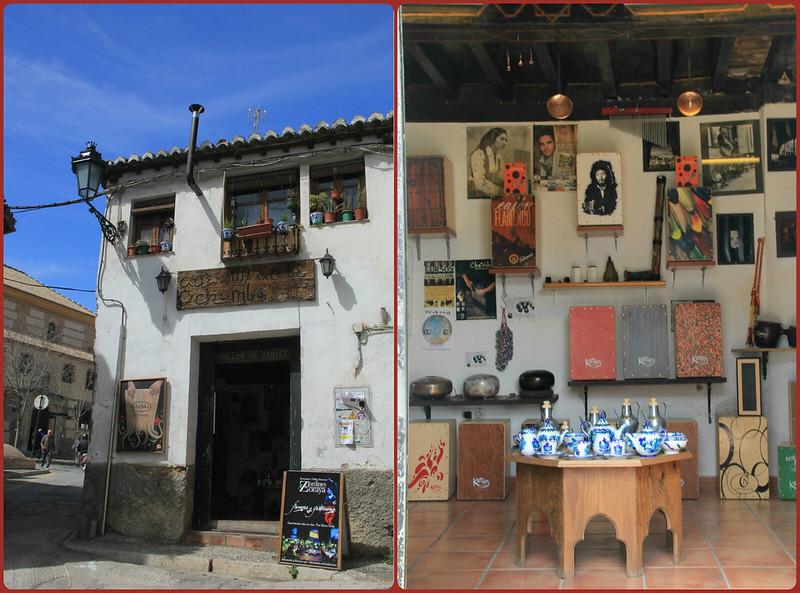 Rising up on the opposite side of the Darro valley to the Alhambra (and therefore offering some photo-worthy views of the magnificent palace and fortress complex), Granada’s Albayzín can be accessed from any one of the narrow streets leading off Carrera del Darro, or by heading up Calle Elvira at the other side of the Plaza Nueva. 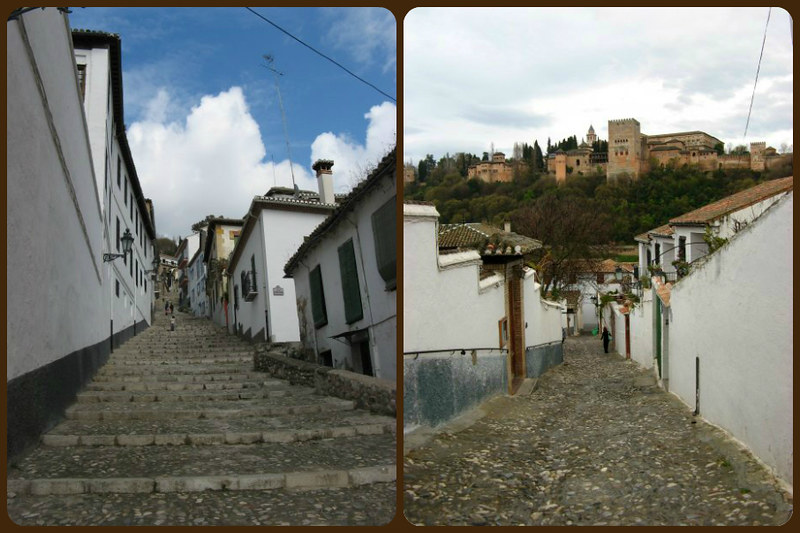 Although it’s a neighbourhood best explored on foot, the climb to the top is steep, and there are numerous flights of steps to tackle along the way, so if you’d rather save your legs, there are a couple of minibuses that run the route for you – or at least part of it.  Buses 31 and 32 circuit the lower Albayzín where the roads are (just about) wide enough to accommodate them.

Named after the church that dominates this attractive square, Plaza de San Nicholas is one of my favourite spots in the Albayzín.  The church itself is nothing spectacular – it’s rather run-down and could do with a coat of paint – however the adjacent plaza is where you’ll always find a gathering of gypsies from nearby Sacramonte, who bring their guitars, accordions, bongo drums, tambourines – whatever musical instruments they can lay their hands on – and play some traditional Spanish music for their attentive audience.

Plaza de San Nicholas is also where you’ll find the picture postcard view of the Alhambra, with the snow-capped peaks of the Sierra Nevadas in the background.

Soak up the atmosphere and the hypnotising sound of a beautifully-played flamenco guitar by pulling up a chair at one of the nearby cafes.  It may not be the cheapest place to enjoy a strong coffee or a cold beer, but it will definitely be one of the best. 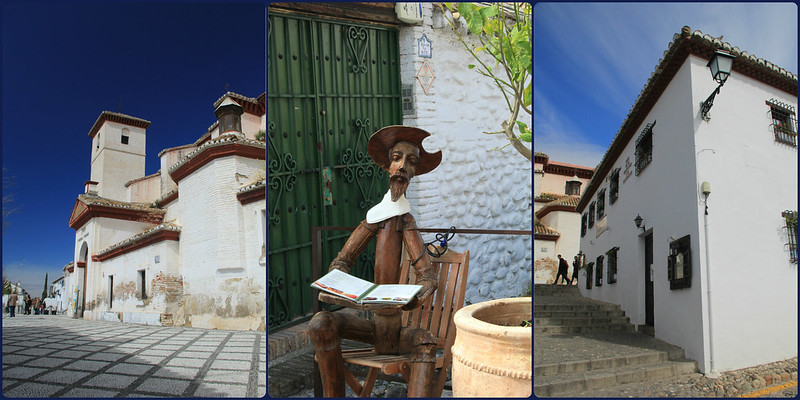 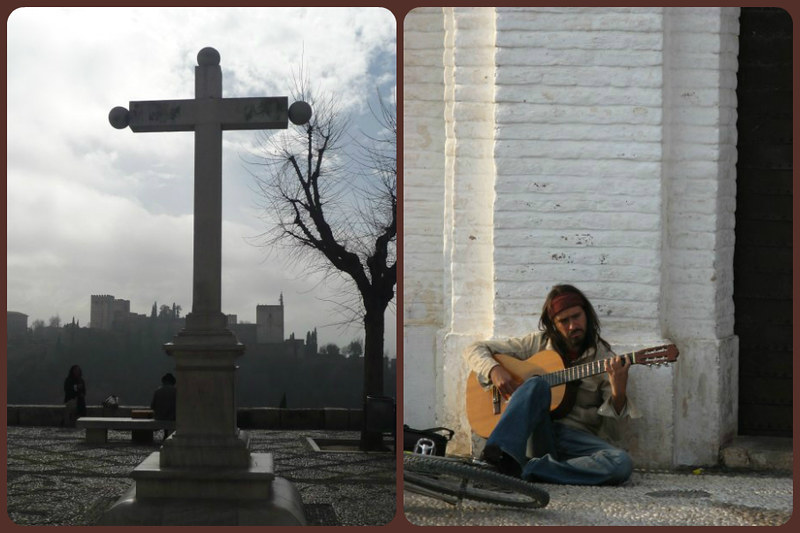 It’s a beautiful walk up to this tranquil plaza, along Calle San José Alta and past one of the oldest churches in Granada, Iglesia de San José.  Plaza San Miguel – along with Plaza San Nicholas – is one of the highest points in the Albayzín. 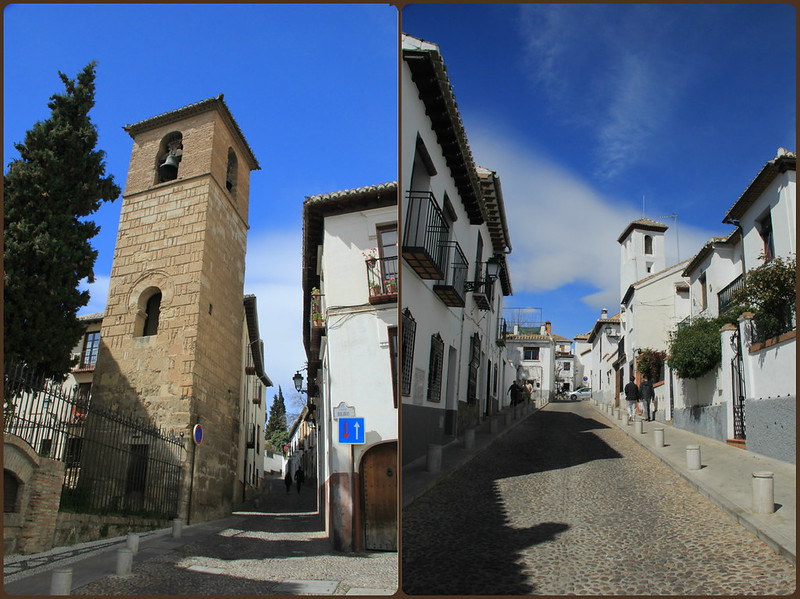 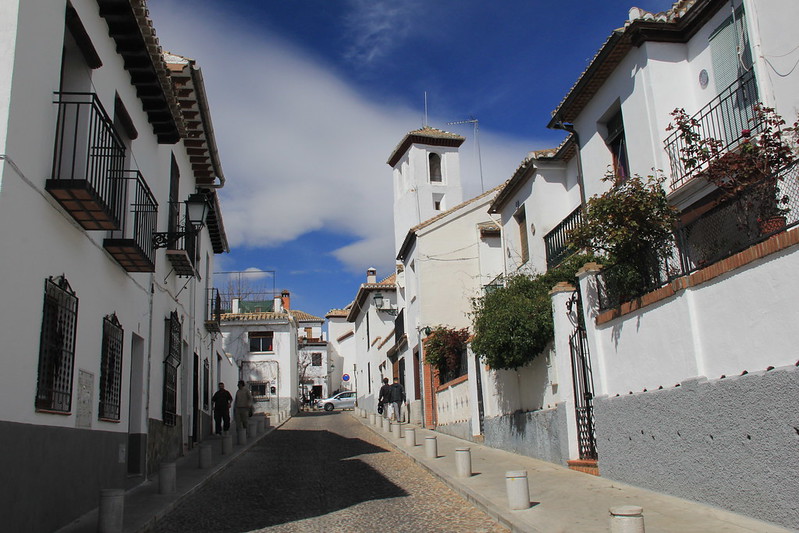 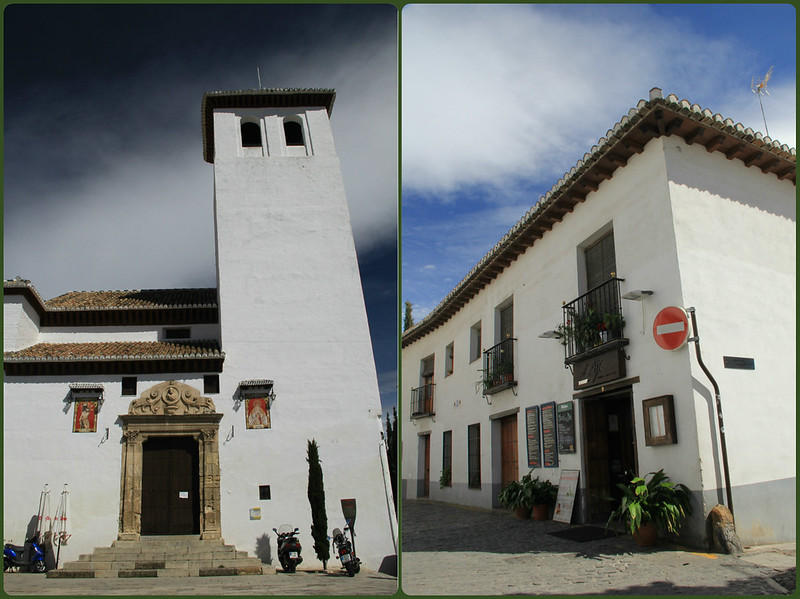 On the way to Sacramonte from Plaza Larga (where you’ll find a small outdoor fruit and veg market), Placeta Albaida is the location of a fascinating artisan workshop and store where glass is blown and crafted into unique household ornaments, lamps and pieces of jewellery.   I wanted to purchase every single piece of glass-art that I laid eyes on, so it’s probably a good job we were travelling with hand luggage only! 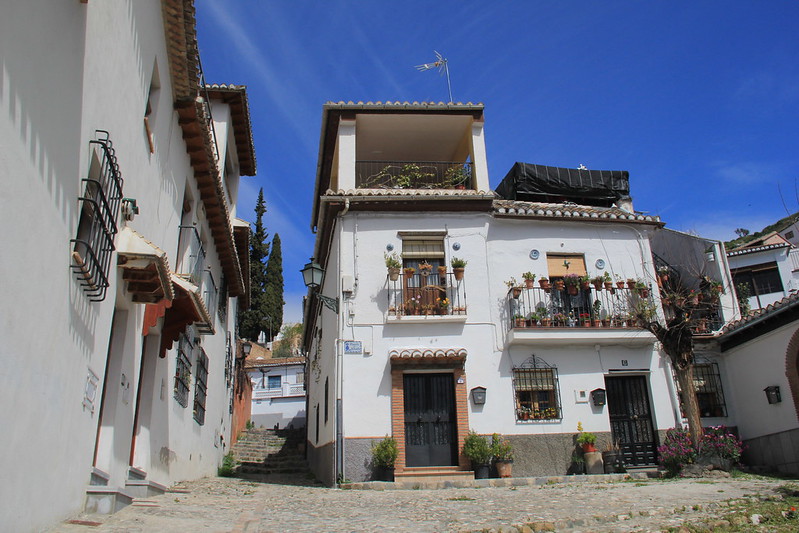 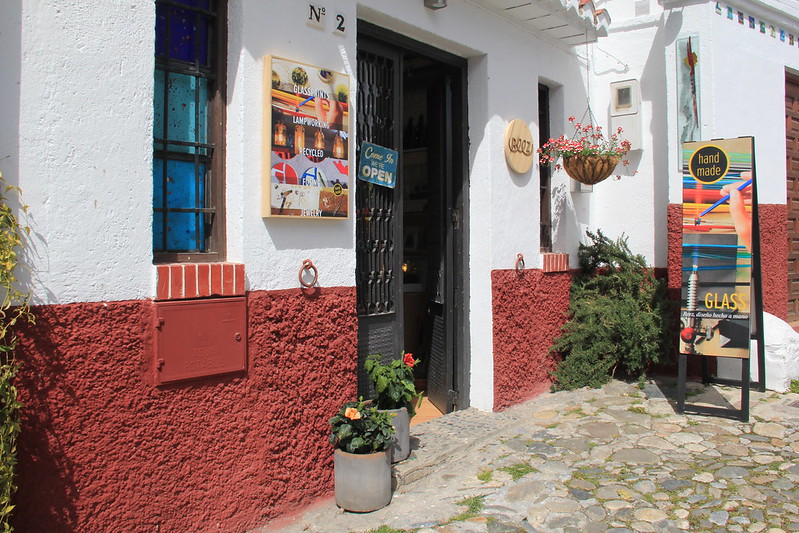 If you want to truly escape the crowds and get a real taste of local life (as well as some of the best views of the Alhambra and the city of Granada down below), take a wander to Sacramonte.  Technically Sacramonte is just outside the Albayzín (as I understand it, the boundary is marked by the wall in the photo below) but one blends seamlessly into the other. 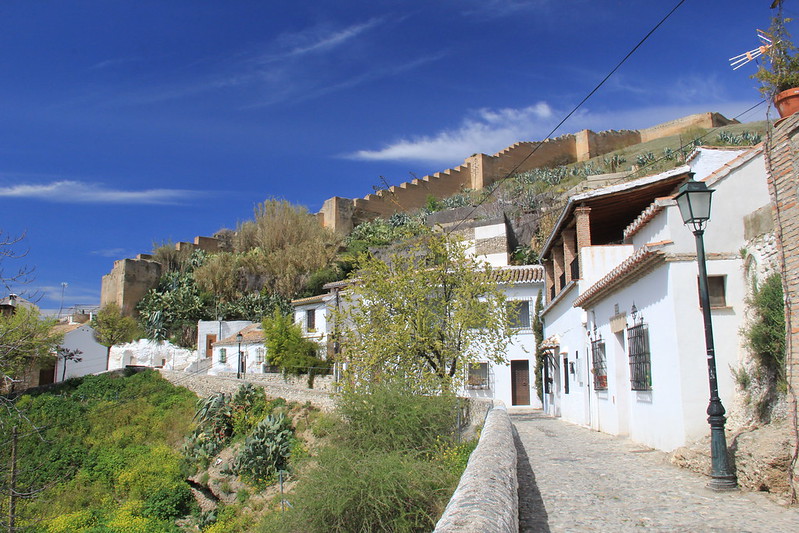 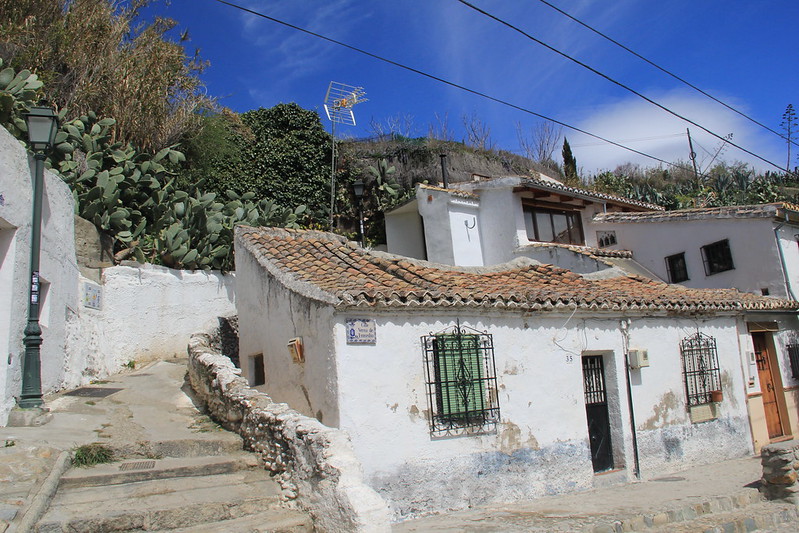 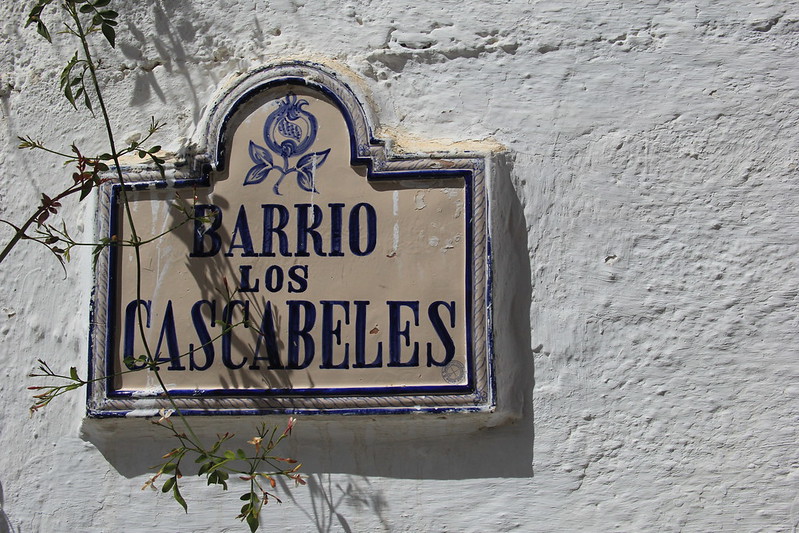 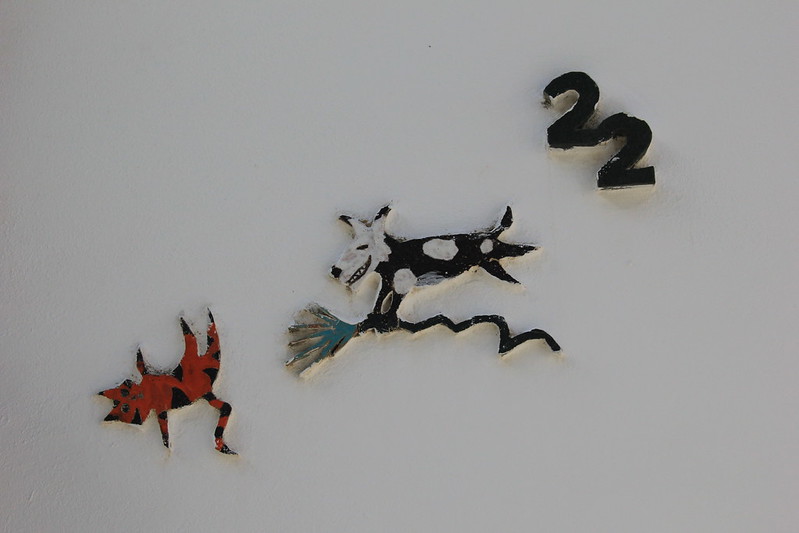 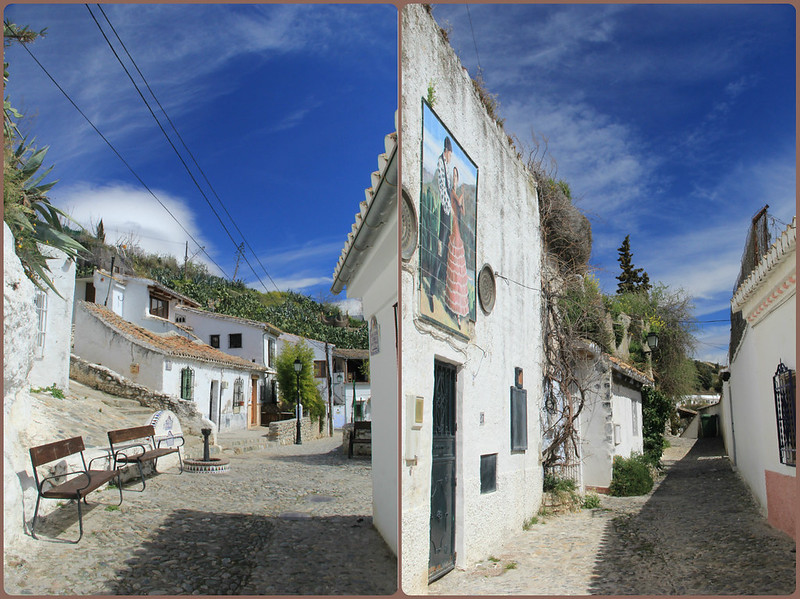 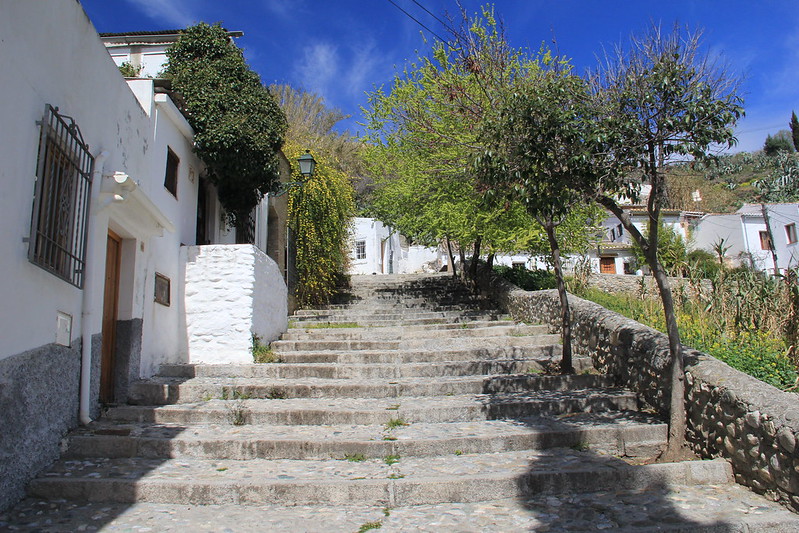 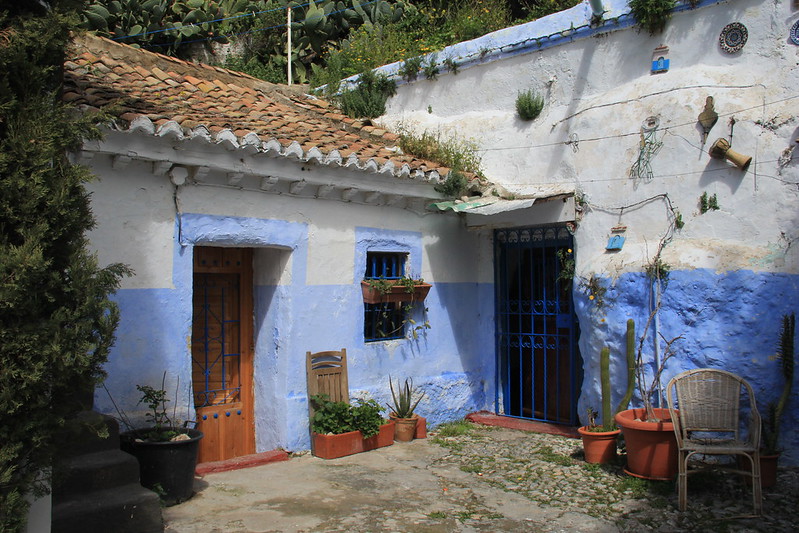 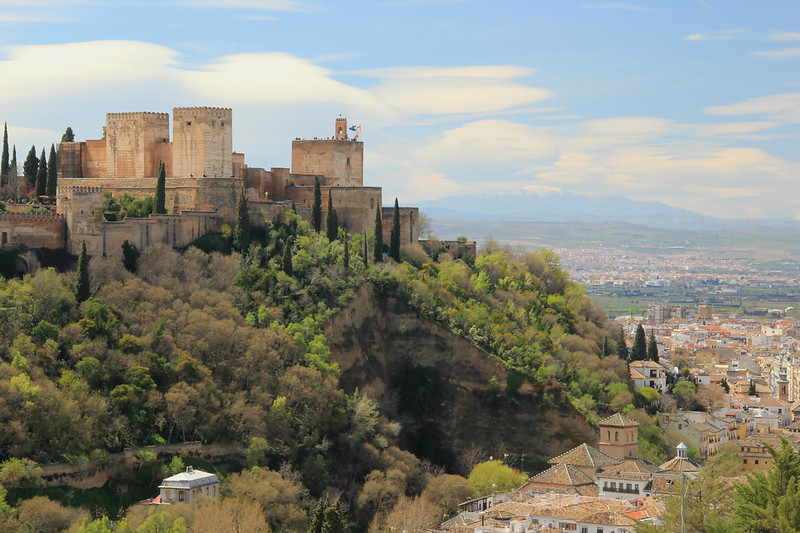 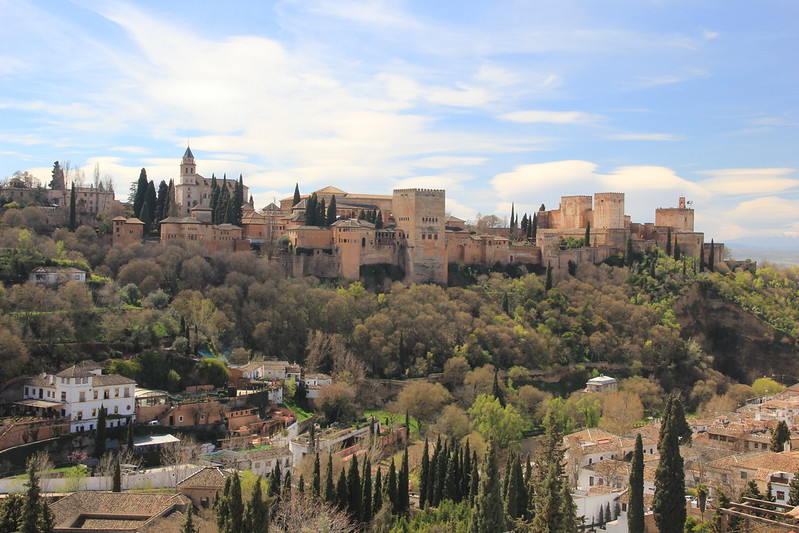 This narrow cobbled street links the upper and lower parts of the Albayzín, and is lined with teterías, restaurants serving Moroccan and Middle Eastern cuisine, and countless bazaars selling leather bags and slippers, harem trousers (everyone who’s travelled through South-East Asia will undoubtedly have owned a pair at some point; personally I love them), hookahs, colourful glass lanterns and painted ceramic tagines.

A wander down Calle Calderería Nueva will immediately transport you to the dusty, hot souks of Fes or Marrakesh. 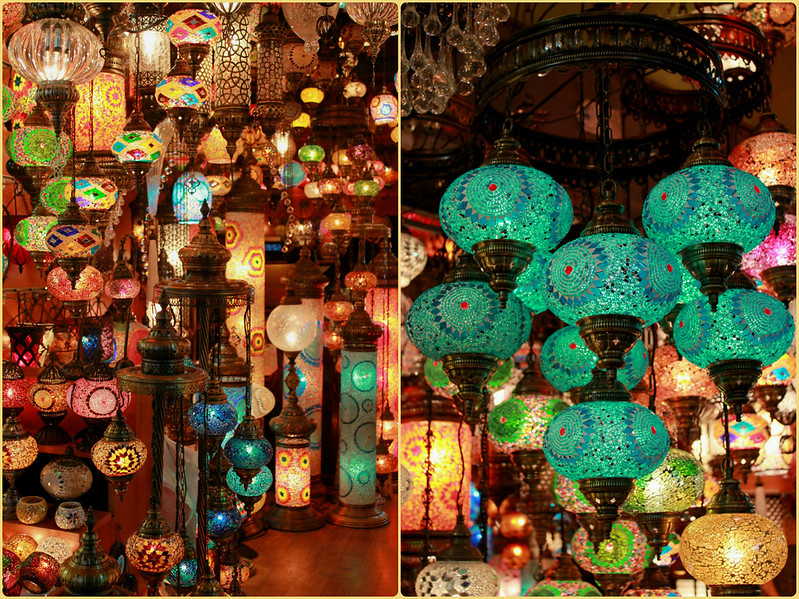 This tiny little restaurant can be found high up in the Albayzín, but I promise you it’s worth the hike.  Serving modern Spanish cuisine with a twist (try the langoustines con tequila y miel – prawns with tequila and honey) from morning through until late at night, the friendly staff at El Ají will do their best to ensure that your meal here is worth every euro.

I totally fell in love with the smoked paprika hummus with sesame seeds, and it’s the only place I’ve seen ceviche served outside of Peru.

Just on the edge of the lower Albayzín and very close to Plaza Nueva, Bodegas Castañeda has been my favourite tapas bar in Granada from the moment I first set foot inside its doors.

It’s a true Spanish relic – huge quantities of cured jamón (Spanish ham) hanging from the high ceilings, wine served from vintage casks mounted on the wall, and an all male cast of waiters who dish the food out to you at lightning-fast speed.

If you don’t want to pay for your tapas (yes Granada is one of the last remaining cities in Spain that still serves tapas as it was traditionally served – one dish free with every drink you order), then you’ll have to fight for standing room at the bar (the seats are reserved for those who order food), but at Bodegas Casteñeda, that’s half the fun.

Having spent your day wandering through the timeless streets of the Albayzín and savouring some delicious food and a lovely glass of Rioja at one of the neighbourhood’s traditional tapas bars or restaurants, what better way to end the evening than bedding down in a traditional Moorish building whose history dates back to the 16th century?

What’s more, this doesn’t have to be expensive – there are some some absolutely beautiful budget stays in the city’s ancient Muslim quarter:

Dating back to 1563, this former Franciscan convent is where we chose to stay during our most recent visit to Granada.  Considering it’s location alongside the Río Darro, and with stunning views of the Alhambra from its street-facing rooms, I couldn’t believe what good value for money this hotel presented.

What’s more, the wifi worked perfectly from the comfort of our bed – a huge plus if you’re a travel blogger! 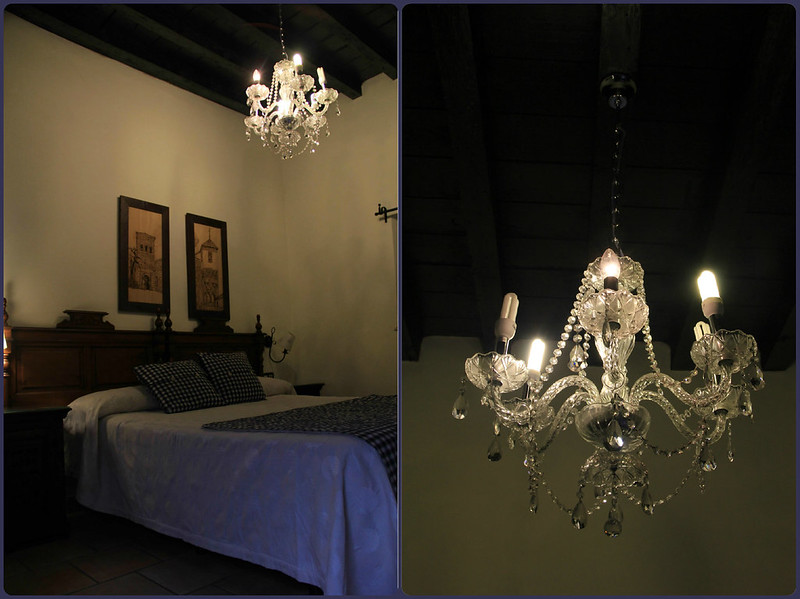 I stayed in one of the dorm rooms here (although they do have private rooms available as well) during a solo trip to Granada and Seville.  Located very close to the Plaza San Miguel and not much further from Plaza San Nicholas, Makuto is a proper little traveller’s haven in the heart of the Albayzín.

There’s a charming garden with an array of hammocks and a treehouse, and the helpful staff can organise guided tours around the Albayzín and nearby Sacramonte.

Hiking the Colca Canyon with a Rather Unusual Guide (part three)

✨Abandoned buildings✨ . . On the return leg of