A Day in The Medieval Hill Town of San Gimignano, Tuscany – Gallop Around The Globe

When I was researching an itinerary for mine and my mum’s 7-day trip to Tuscany, I kept being drawn to the beautiful medieval hill town of San Gimignano. 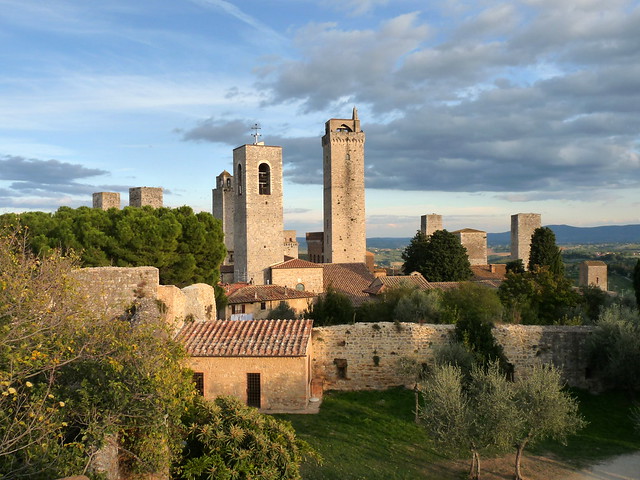 With a population of just under 8000 permanent residents, and no roads within its 13th century walls wide enough to accommodate the majority of motorised vehicles, a visit here would make a nice contrast to the busy, traffic-filled streets of Florence. 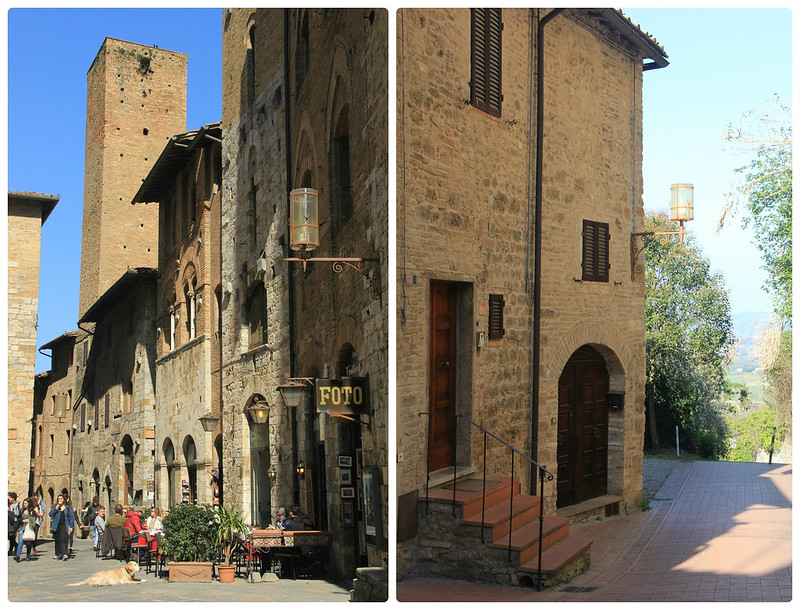 San Gimignano (pronounced “Jiminyano”) is often referred to as the “Manhattan of the Middle Ages” due to its stunning hilltop skyline of towers that were built in aristocratic rivalry by the feuding nobles of the twelfth and thirteenth centuries.  Of the original 72 towers, 14 survive today, the tallest of which is open to the public. 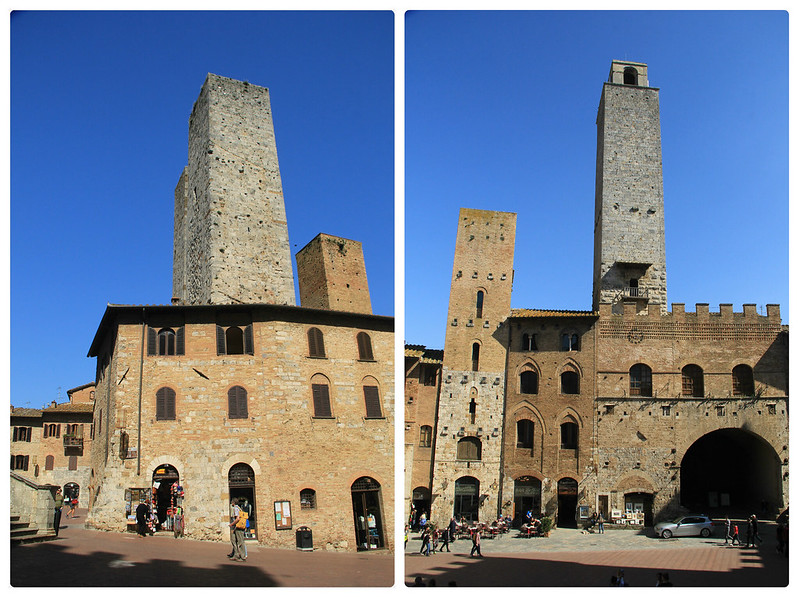 The historic centre of San Gimignano has been declared a World Heritage Site by UNESCO, containing well-preserved examples of Romanesque and Gothic architecture, churches, and medieval fortifications. 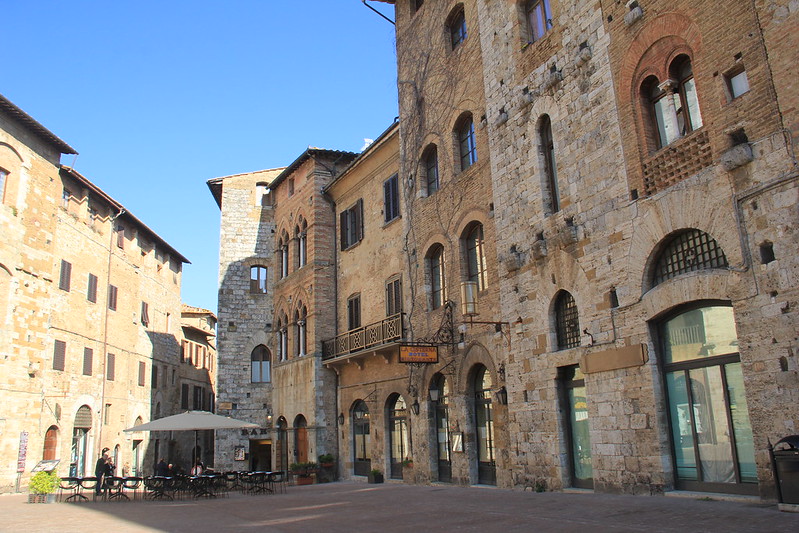 It’s also famous for its saffron, Golden Ham, and Vernaccia di San Gimignano – a white wine that is produced from the Vernaccia grape (an ancient variety that is grown on the sandstone hillsides of the surrounding area).

Seeing as though we didn’t really want to rush about from place to place with our luggage any more than we had to, we decided to base ourselves in Florence for the first four nights of our trip, and make a day trip out to San Gimignano by local bus. 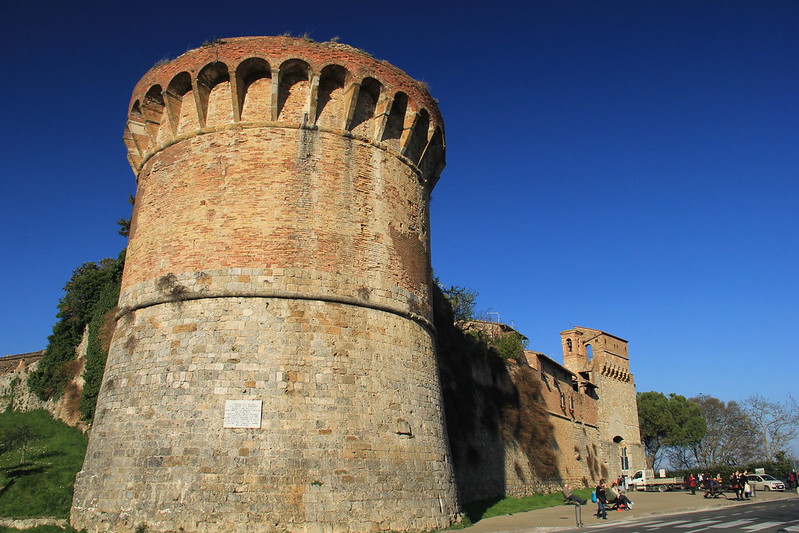 The bus dropped us just outside the old town walls on Viale Roma, from where we were able to enter through Porta San Giovanni.  Via San Giovanni then continues north through the town towards Piazza Duomo and the location of the largest concentration of San Gimignano’s notable historic buildings, including its tallest tower – Torre Grossa.

Via San Giovanni is lined with shops (selling a variety of brightly-painted ceramics, artisanal food and drinks, and leather goods) and cafes serving coffees, cakes, and gelato.  As San Gimignano’s historic centre is pretty compact, you’ll have time to stop for a caffeine fix and to have a quick browse. 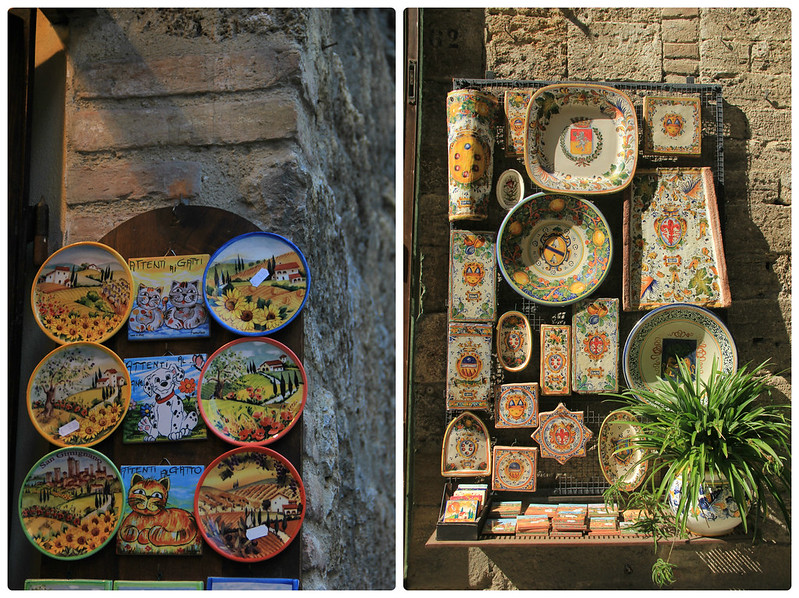 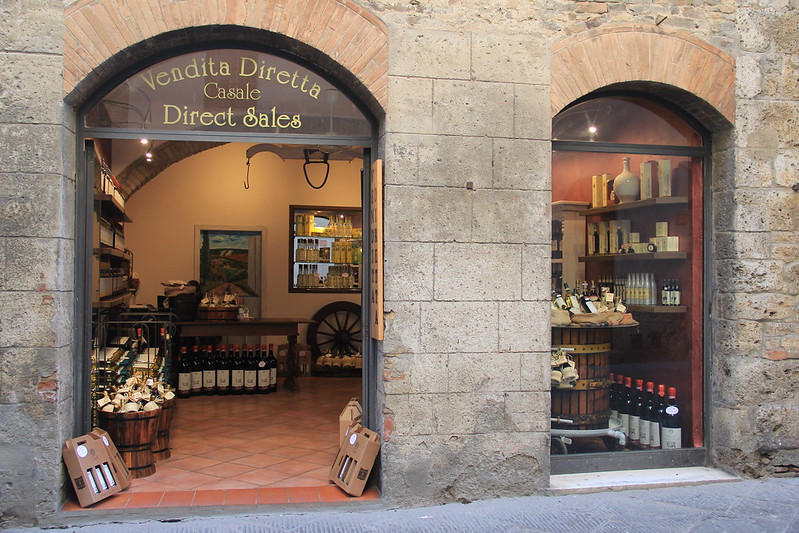 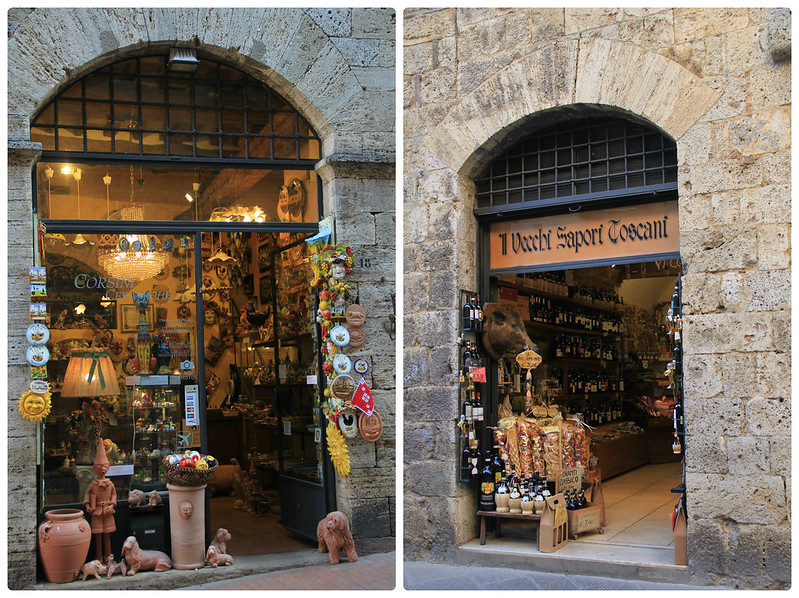 While in San Gimignano, the best way to explore the town is simply to wander aimlessly through its narrow streets, but don’t leave without:

Access to the top is via a wide metal stairway with landings, which makes it quite an easy climb compared to some of the other towers I climbed in Tuscany.  The trickiest part is the uppermost section, where you’ll ascend around 15 rungs on a small ships ladder, and subsequently squeeze through a tiny opening which takes you out on to the roof of the tower. 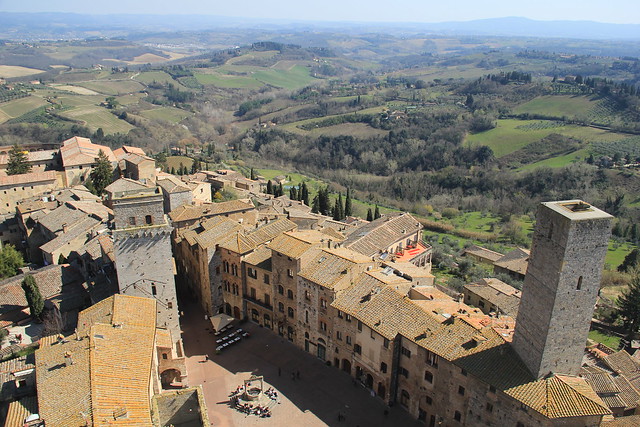 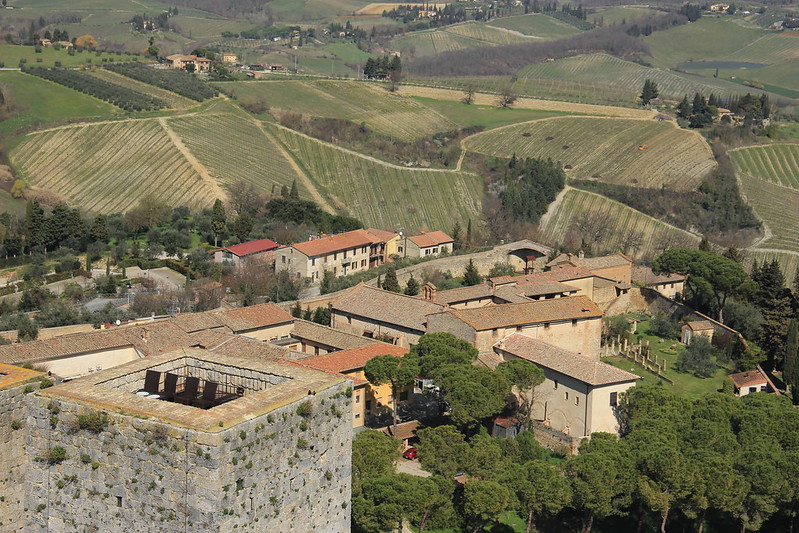 Watch your camera as you do so; you’ll need it to photograph the incredible 360 degree panoramic views of the of the town and its surrounding countryside.  You can actually see the whole Valdelsa region from the tower’s summit, as well as the mountains of the Pistoia area, and as far as the Apuan Alps. 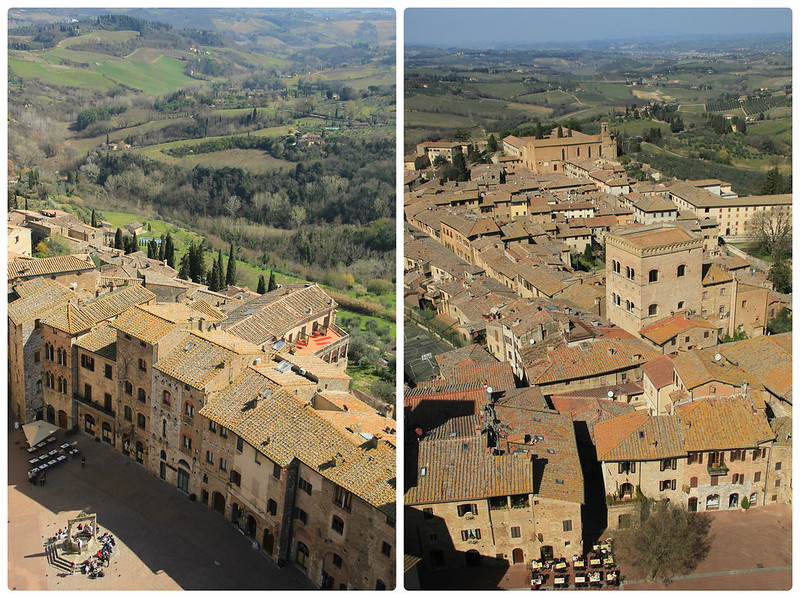 #2 Having a look around the Spezieria di Santa Fina, one of Tuscany’s oldest pharmacies 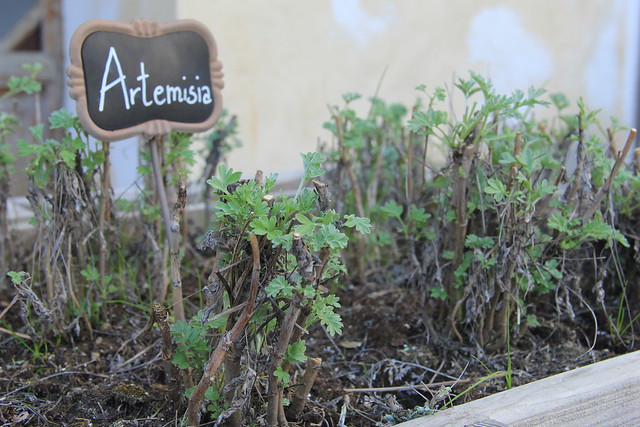 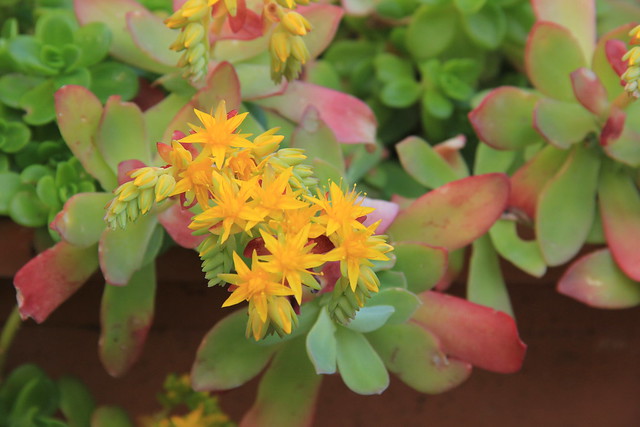 The Spezieria di Santa Fina reproduces the layout and original scents of the 13th century pharmacy, and there’s a lovely garden in which herbs are grown and furniture is made out of old pallets. 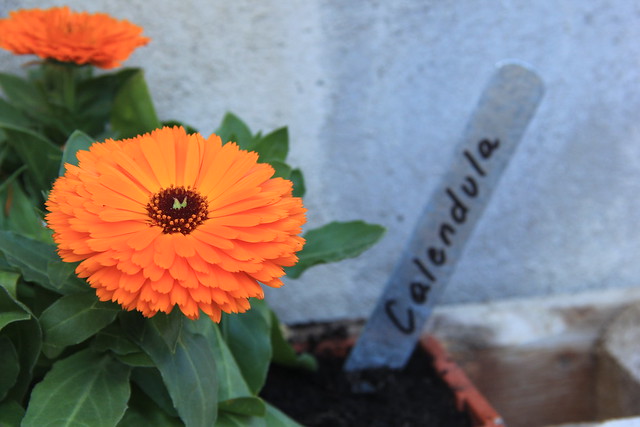 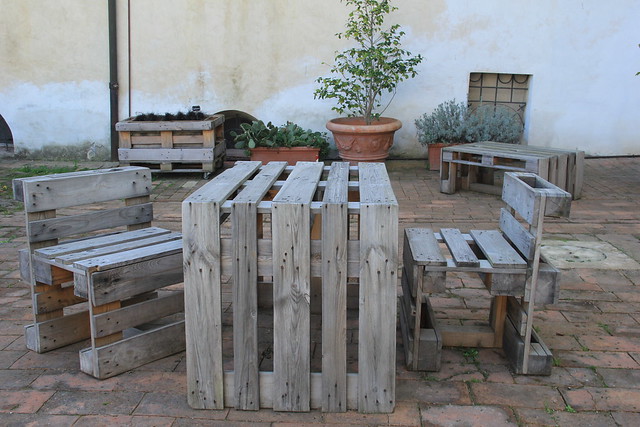 Although we only found out after eating here, Caffè delle Erbe is recommended in Lonely Planet’s Florence and Tuscany guidebook as one of the best places to eat in town. 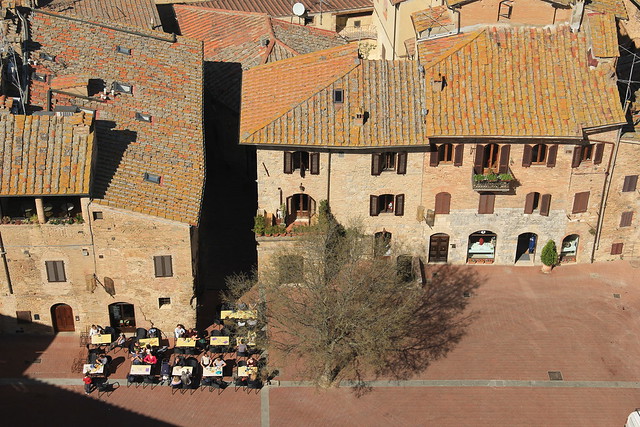 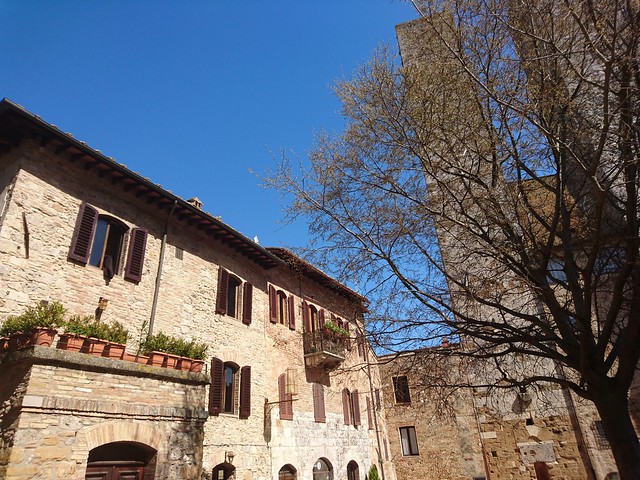 It’s located in a lovely sunny spot on the edge of the Piazza delle Erbe, with fantastic views of San Gimignano’s famous towers.

We enjoyed a delicious salad with rocket, cherry tomatoes, capers, tuna, and anchovies, accompanied by a panini with figs and gorgonzola.  My mouth is watering just thinking about it! 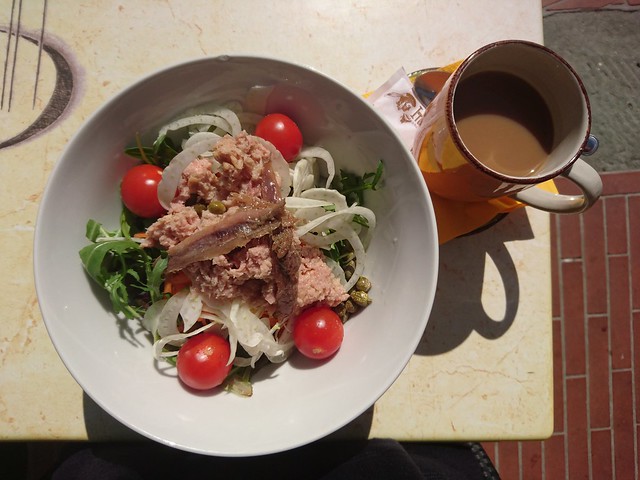 #4 Walking along the old town walls

It is possible to walk along the perimeter (3.5 kilometres) of the second circle of the 13th century walls that form the boundary to the historical centre of San Gimignano.

There are various different access points from either inside or outside the town, and the walk affords some beautiful views of the surrounding hills and of the Elsa valley beyond. 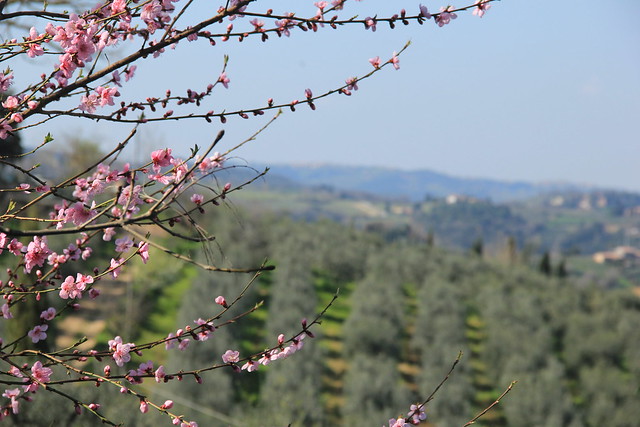 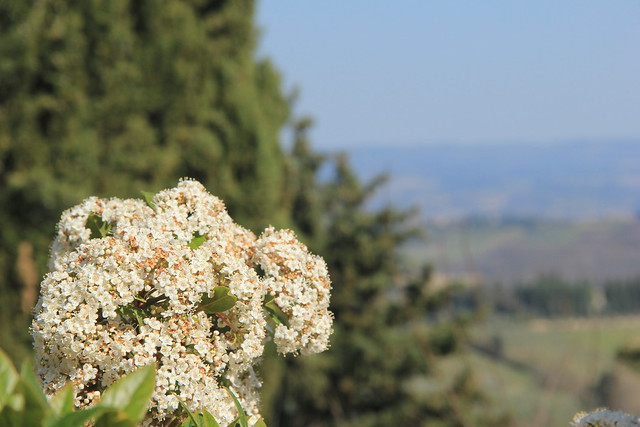 #5 Escaping the crowds in Piazza Sant’Agostino

Equally as charming as Piazza della Cisterna but significantly quieter, Piazza Sant’Agostino is where you’ll find the Chiesa di Sant’Agostino, a 13th century church whose simple facade still retains the characteristics of its original architectural style. 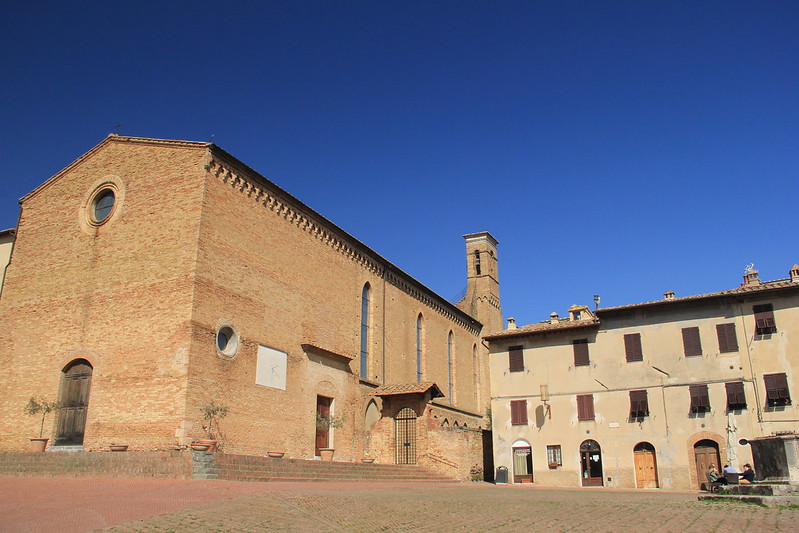 We arrived into Piazza Sant’Agostino just after the church closed its doors for the afternoon, but there are apparently some beautiful frescoes inside.

#6 Taking a walk up to the fortress

Originally a castle of the Lombard Astolfo, and later a Dominican Convent, San Gimignano’s fortress (Rocca di Montestaffoli) was built by the Florentines in 1353. 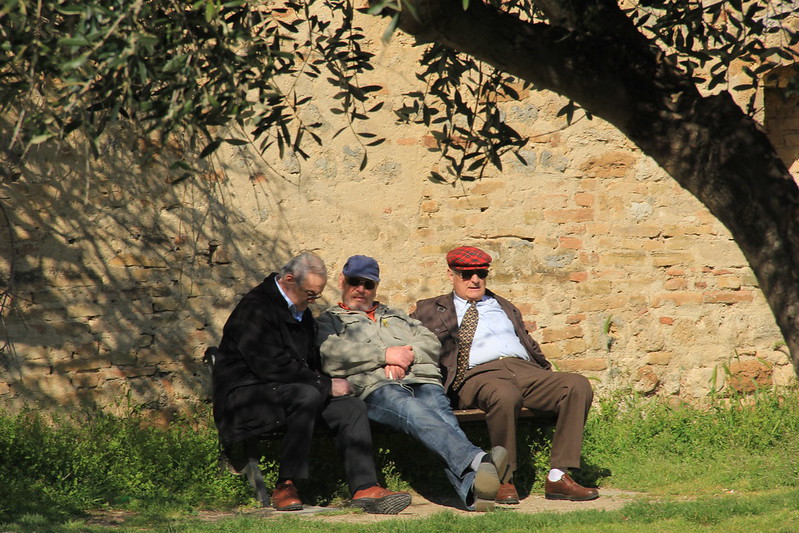 I noticed the fortress from the top of Torre Grossa and thought it would be a great place to head for an alternative perspective of the town’s historic centre.

It was pretty crowded up on its one remaining turret (the only one remaining that’s safe and open to the public) but the views are pretty impressive, and the surrounding streets are peaceful and largely tourist-free. 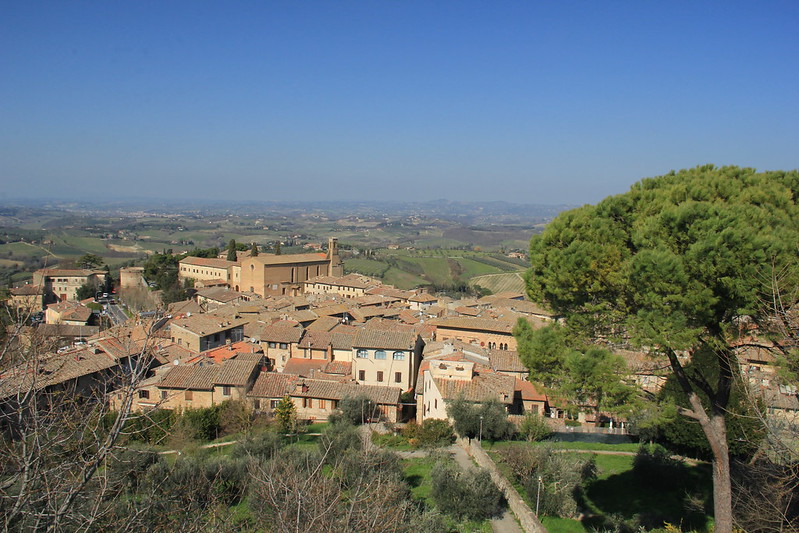 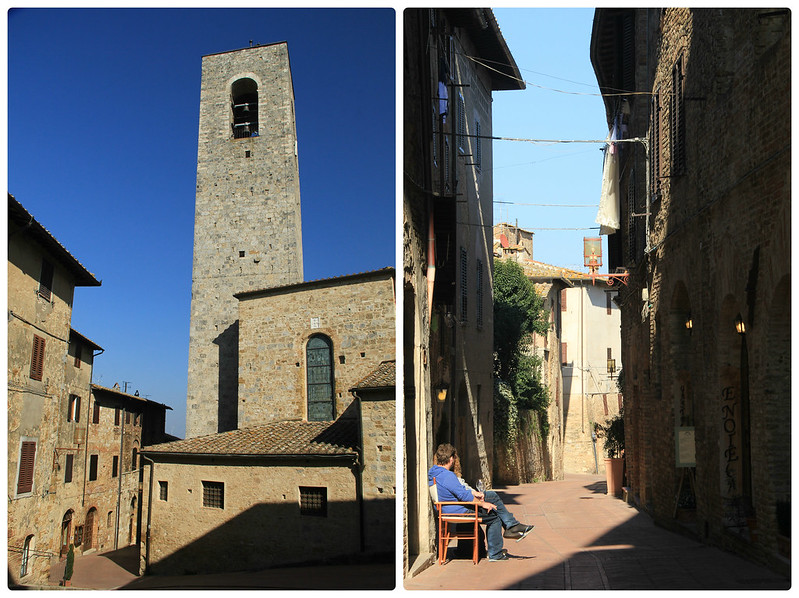 There’s also a walled garden to the left before you reach the steps, which is home to this rather unusual sculpture. 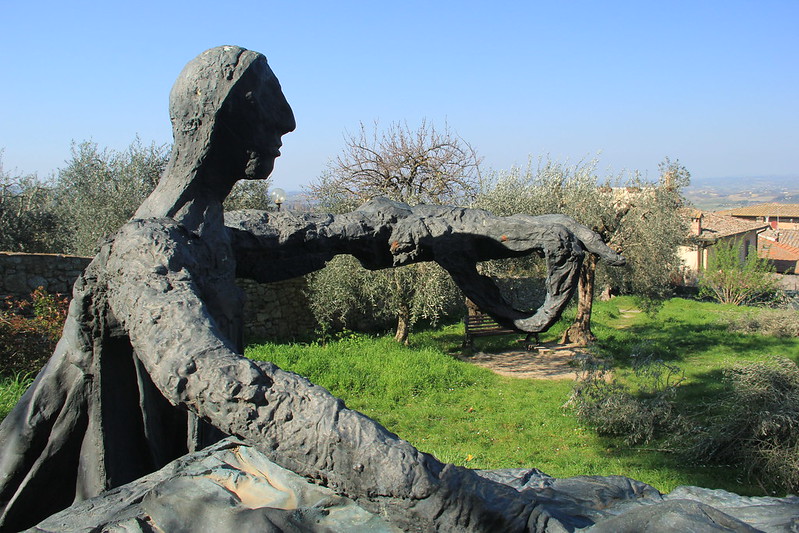 I found this bus timetable online.  Although it’s only in Italian and I’m pretty sure I don’t know more than 10 words of Italian, I found it fairly easy to use and understand.

If you’re travelling from Florence (as we did), you’ll need to make a change in Poggibonsi.  The entire duration of the journey is approximately 1hr and 45 minutes and costs €6.80 for each leg of the trip. 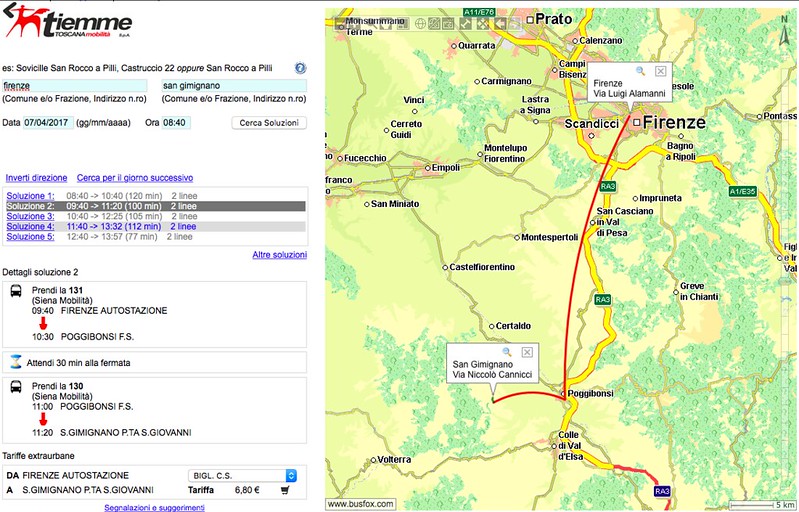 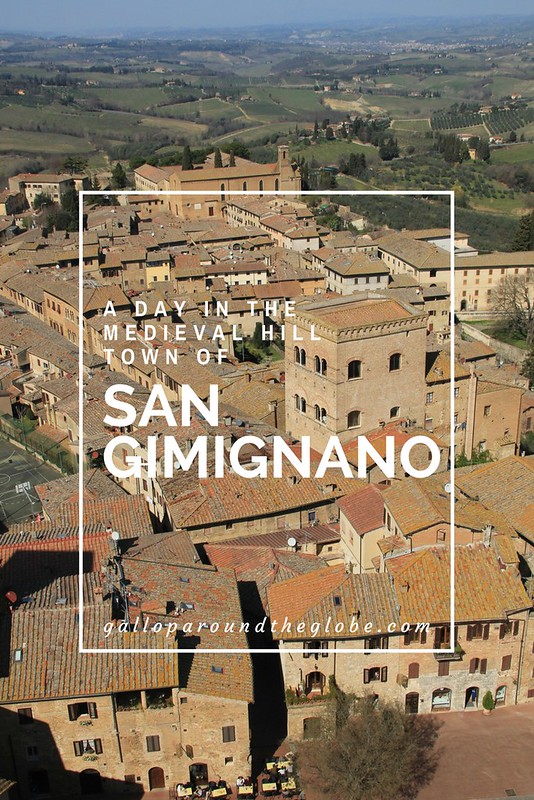 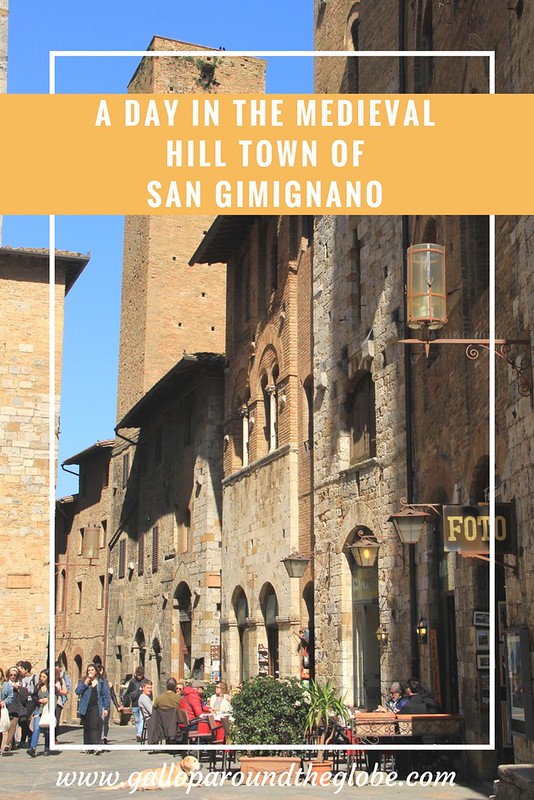 Exploring Puglia on Two Wheels: A One Week Puglia Itinerary

Trekking from Kalaw to Inle Lake: A Packing List – Gallop Around The Globe