Slovenia may only have 42 kilometres of coast but it’s quality over quantity that counts, in this former Yugoslav republic that’s roughly the size of Wales.  Sandwiched between Italy and Croatia, Slovenia’s coast is full of colourful, Italian-style fishing villages, olive groves, and clean, clear water.

There are four main coastal resorts in Slovenia – Koper, Izola, Piran, and Portoroz –and one of the best ways of travelling between them is by bicycle; there were more cycle paths along this small stretch of coastline than I’d seen anywhere else on my 7-day cycling adventure.

Originally founded in the middle of the bronze age, when it was nothing more than an ancient settlement on an island in the Bay of Kotor, Koper is now the largest of Slovenia’s coastal towns. 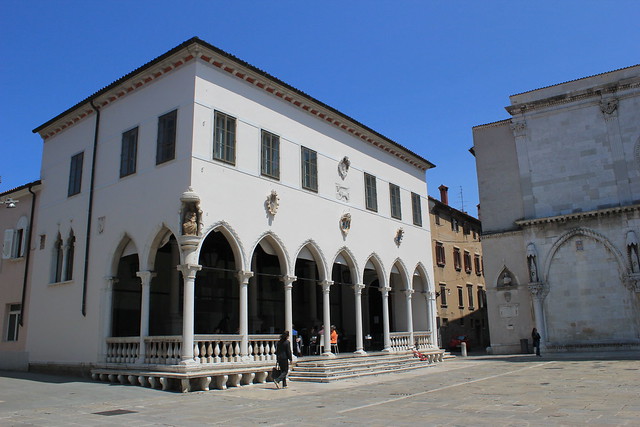 The Venetians ruled the town for over 500 years, and as a result its medieval core is filled with beautiful well-preserved Venetian architecture, and its residents speak a mix of Slovenian and Italian. 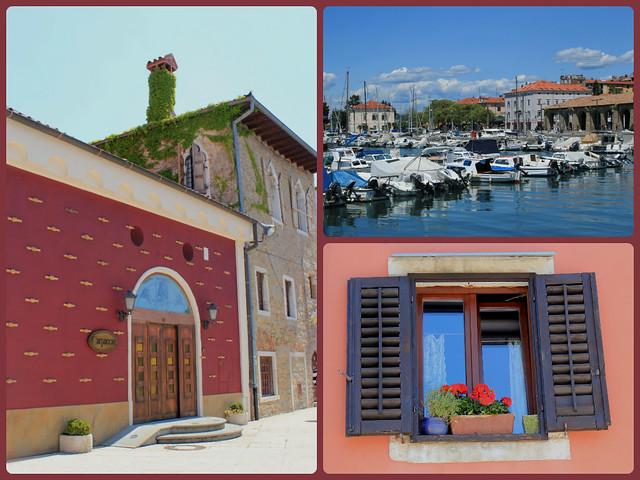 From Koper it’s possible to reach Izola by following the old tracks of the Parenzana Railway, a service which operated from 1902 to 1935 and connected Trieste, Italy, to Porec in northern Croatia.

The disused gauge railway was developed into a cycling and hiking route in 2002, on the 100th anniversary after its opening.

Like Koper, Izola started life as an island (the Italian ‘Isola’ literally means “an island”) that was later connected to the mainland by a narrow stone bridge.  The discovery of a thermal spring in 1820 saw the beginnings of tourism in the town, but it was Izola’s subsequent growth as a fishing port that shaped the town and made it what it is today. 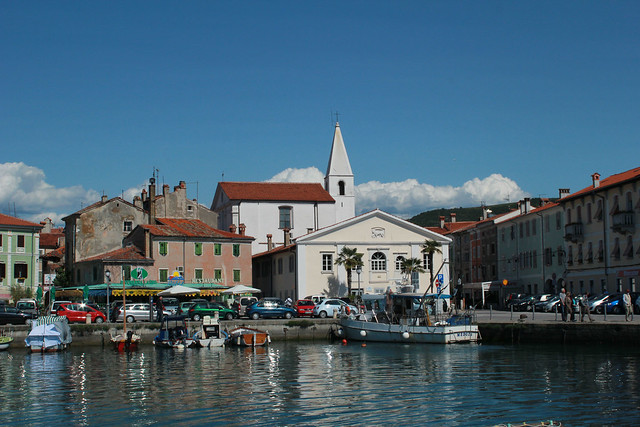 As well as a large picturesque harbour Izola is famous for its wine and olive oil, and for serving up some of the tastiest seafood in the area.  It’s narrow medieval streets are also filled with museums, galleries, and artists’ studios.

As you continue your journey along the coast from Izola, the cycle path will take you slightly uphill, offering stunning views back across the town’s harbour. 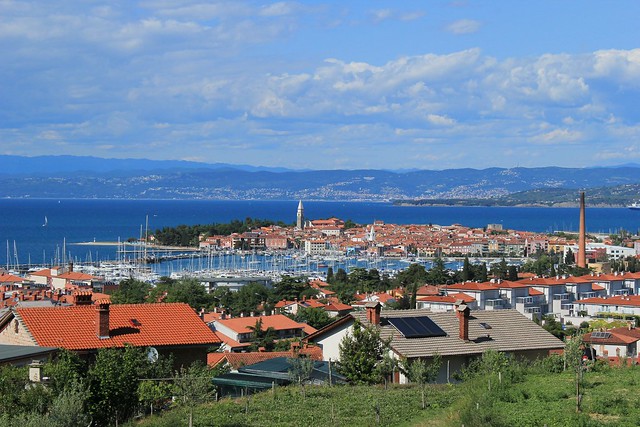 Continue a little further and you’ll cycle alongside the glistening seas of the Gulf of Trieste, through some beautiful fertile valleys dotted with almond trees.  You’ll also pass Strunjan, a salt-making village between Izola and Piran. 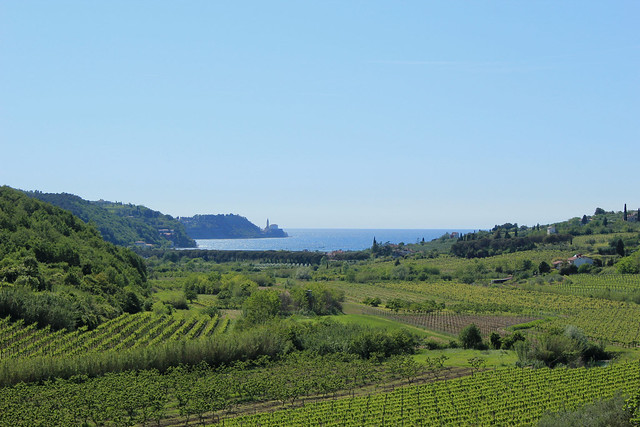 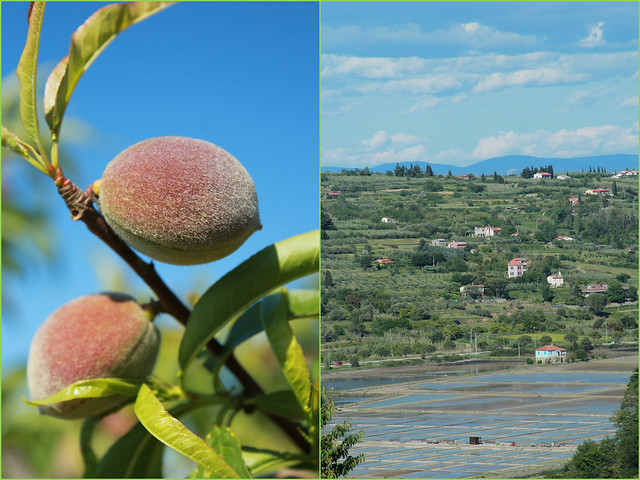 Piran is an old, fascinating and well-preserved Mediterranean city situated at the tip of the peninsula on the Gulf of Piran, and was my absolute favourite of Slovenia’s coastal towns. 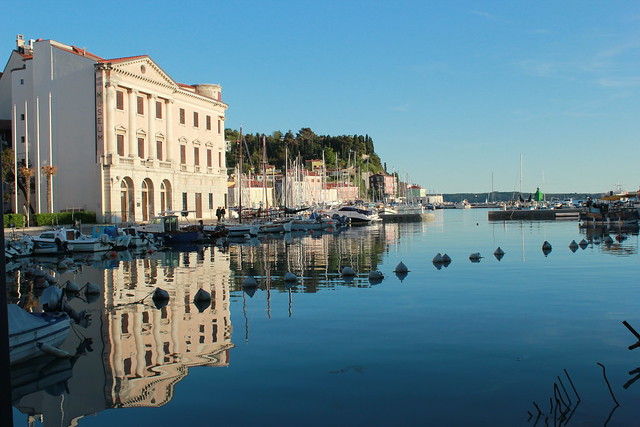 It gets its name from the Greek word for fires, ‘pyr’, referring to the fires lit at the very tip of the peninsula , to guide ships to the port at (what is now) Koper.  Its old town (centred around Tartinijev Trg) is filled with Venetian Gothic architecture and alleyways, and tempting seafood restaurants. 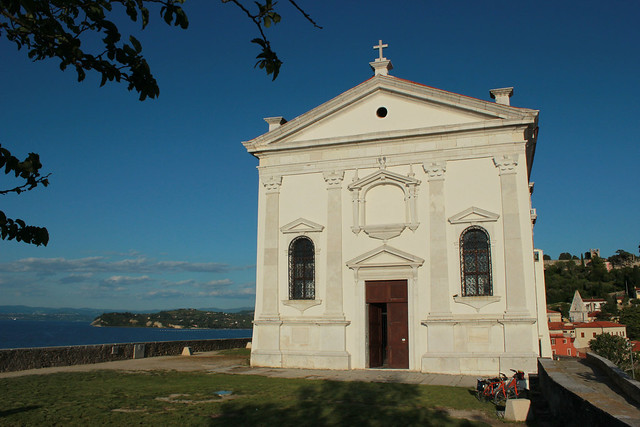 For some of the best views of the town follow Rozmanova ulica (on the square’s eastern edge) all the way up to the impressive Baroque Church of St George.

Alternatively you can climb up on to the old city walls, parts of which date back to the seventh century.  There are seven well-preserved gates through which you can enter the walls, and you’ll be rewarded by picture-perfect panoramas like this one. 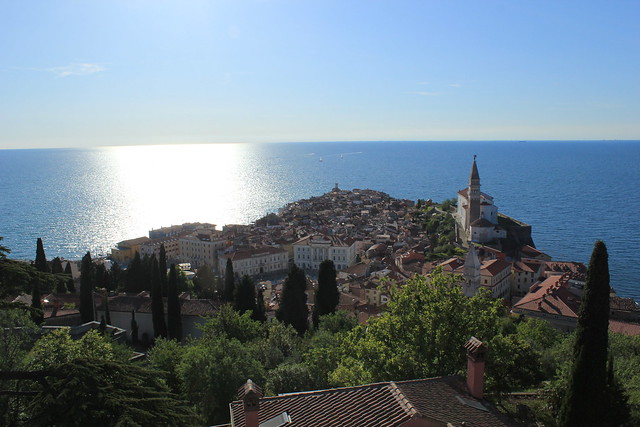 Although Portoroz was my least favourite of Slovenia’s coastal towns (it lacks the quaint, picturesque beauty of the other three), it does have some redeeming qualities.    It’s famed for its mild climate, long sandy beaches, abundance of health-inducing mineral-rich mud baths, and its lively nightlife.

Whilst we didn’t sample any of the town’s trendy cocktail bars (due to having a 60 kilometre cycle ride to Porec the following day), we did find a lovely restaurant serving up some tasty Istrian cuisine.   And obviously we had to wash it down with a large glass of local wine, too.

So if you’re visiting Slovenia – a beautiful country that’s still largely untouched by tourism – make sure you allow some time to explore its small but perfectly-formed coastline. 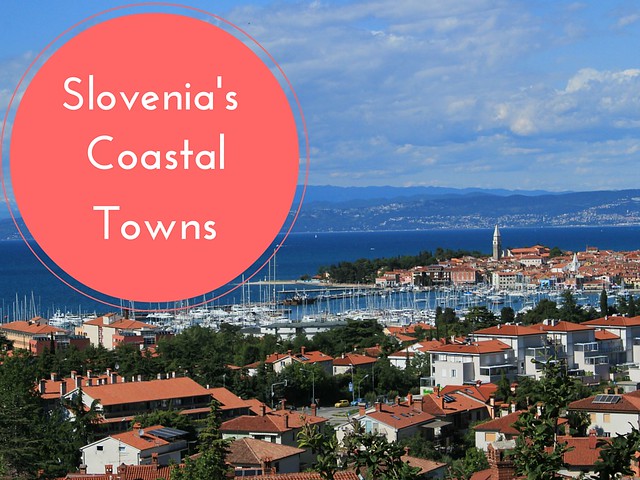 10 Things Nobody Tells You About Walking Hadrian’s Wall

13 Sights Not to Miss on a Road Trip Around São Miguel, the Azores

Bratislava and Krakow: A tale of two Eastern European Cities

Discovering the Incredible Creations of Cuban Artist, Henry Aloma | Gallop Around The Globe