I realised today, whilst performing research for an article on Beijing that I was writing for Hipmunk, that I’ve hardly published any blog posts about the three weeks I spent in China back in November 2012.  I’ve got a journal full of notes and a hard drive full of photographs, but just two published posts, on The Great Wall of China and the Summer Palace in Beijing.

Although I didn’t love China in the same way that I loved other Asian countries like Thailand or Laos, I was certainly fascinated by this unique, diverse, complex and compelling country.

What surprised me most about China is that every city is built on such an enormous scale, and the infrastructure is growing so rapidly that you’ll even find maps showing tube stations that are still under construction.  This is fine if you aware of this fact before spending two hours wandering around the outskirts of central Beijing attempting to find said tube station!  This mistake almost resulted in our entire group missing our scheduled train to Xi’an.

Tip: if you’re going to get lost in a city, don’t pick one the size of Beijing, and don’t choose to go exploring on the day that you have to leave the city.  Karen and I thought we were being intrepid setting out on our own, but everything that could have gone wrong that afternoon, did.  And it was only through the kindness of strangers that we managed to find our way back to the hotel, to be greeted by our rather panic-stricken guide and a bunch of incredibly anxious fellow group members.

One of the things I love about foreign countries that have an very different culture to those of the westernised world, is exploring their markets.  My favourite world market to date (and one that I’ve written an entire post on) is Belén in Iquitos, on the edge of the Amazon jungle in north-eastern Peru.

Whilst wandering through the dirt and squalor had its stomach-clenching moments – as did watching a stocky lady armed with a meat cleaver slicing a tortoise into several pieces – Belén intrigued me by its differences.  There were unfamiliar fruits and vegetables as well as an abundance of natural products from the Amazon jungle, which were either for sale in their organic state, or had been made into various different medicines, tonics, or potions.

Whilst this has become more of a tourist attraction than a local market – due to the endless displays of foods that we would expect to see in the ocean rather than on a cocktail stick or in a stew – it’s still well worth a visit if you’re in the area. 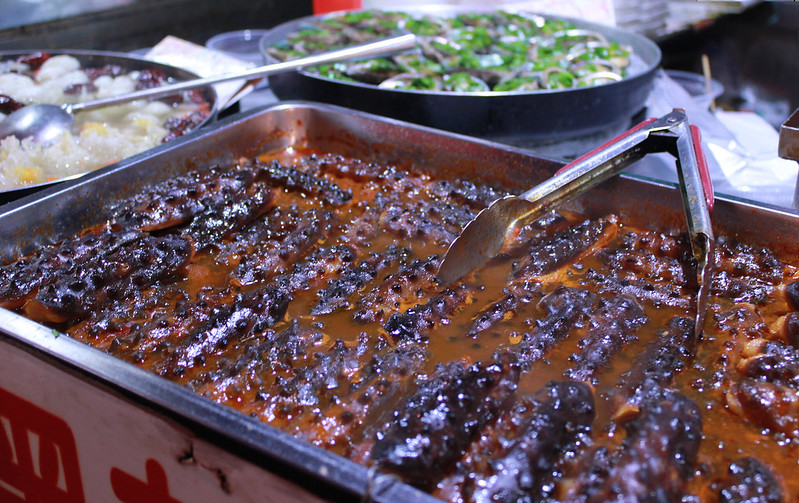 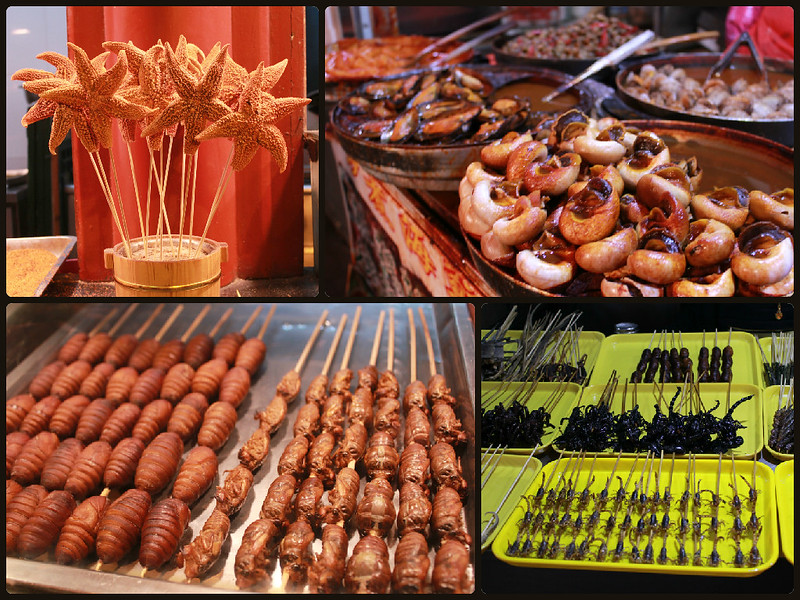 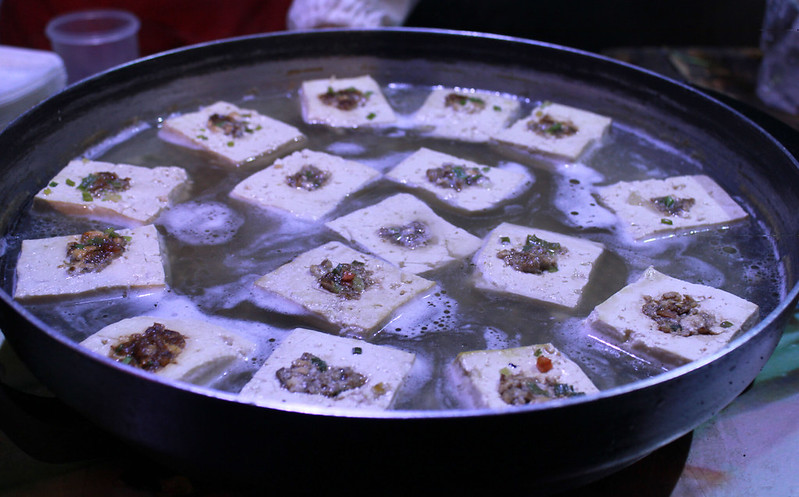 We combined our visit with a viewing of a local Kung Fu show, which was actually really entertaining and well-staged – plus I got to pose with the cast at the end of the show (for the cost of 20 yuan, mind).

Over 1000 years ago Xi’an was the starting point of the famous Silk Road, an ancient network of trade and cultural routes that connected east and south Asia to Mediterranean Europe.  Merchants and overseas students from Arabic countries and Persia used to travel to Xi’an for business, and began to settle in the area that’s now occupied by the Muslim Market. 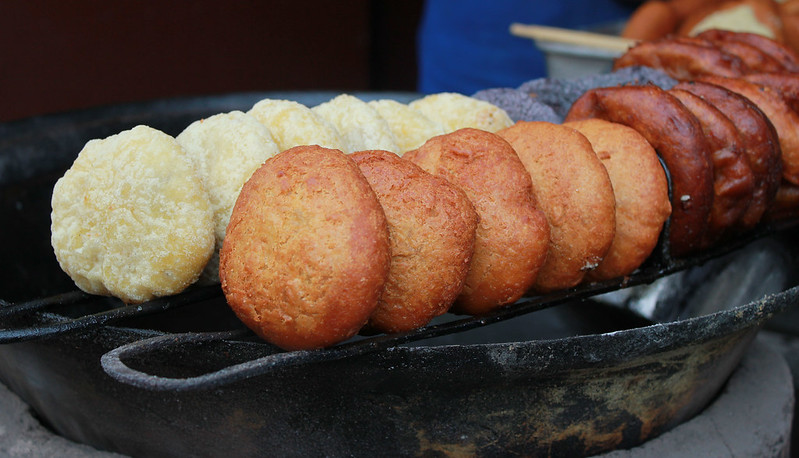 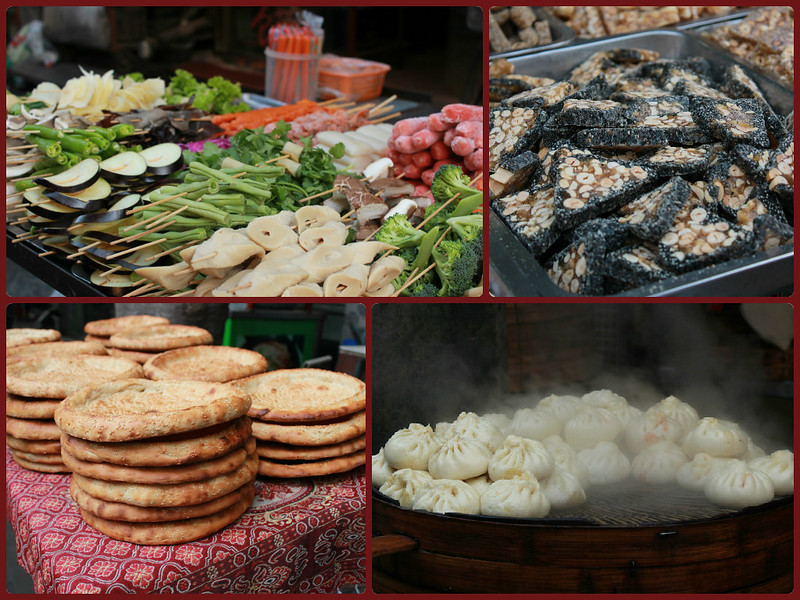 Paved with blue flagstones and shaded by trees, the old style bazaar is a fascinating place to wander through.  You can sample everything from traditional Chinese teas and dumplings, to middle-eastern style breads, sweets and kababs, to a selection of dried fruits and walnuts. 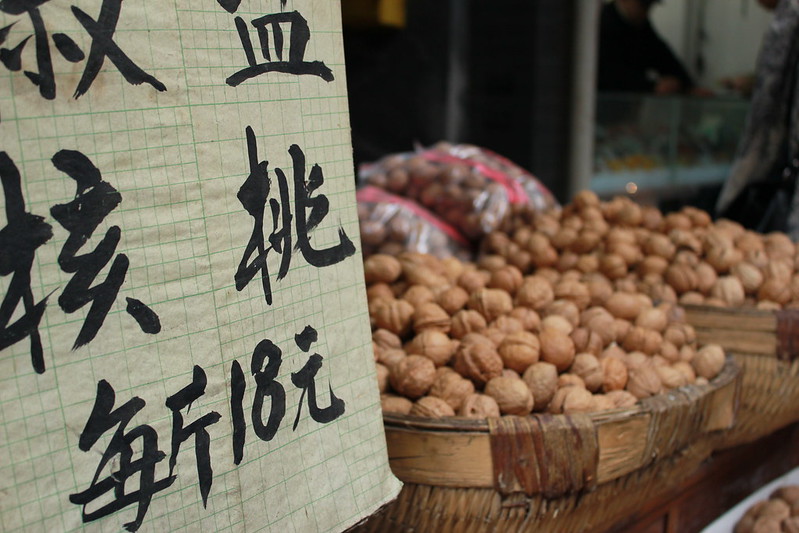 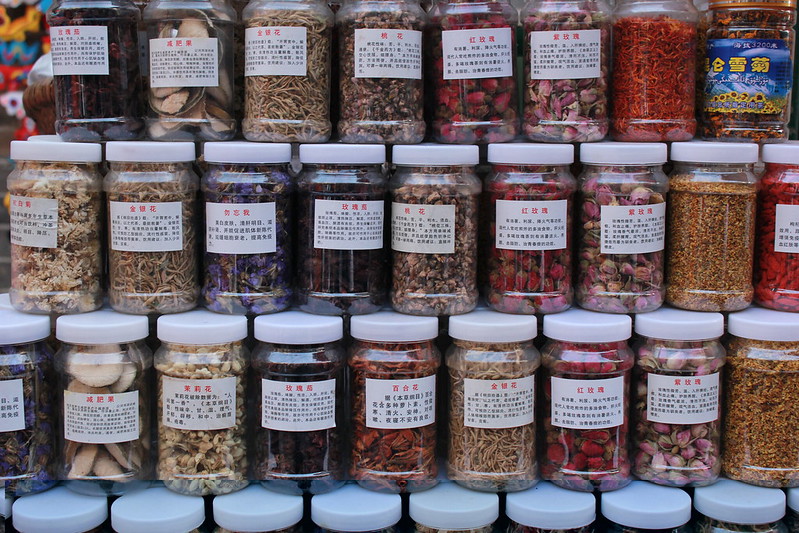 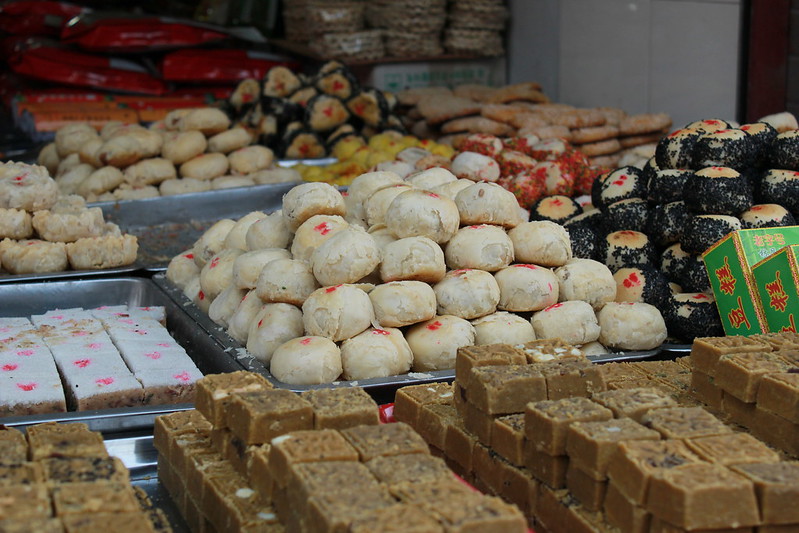 You can also watch local craftsmen at work. 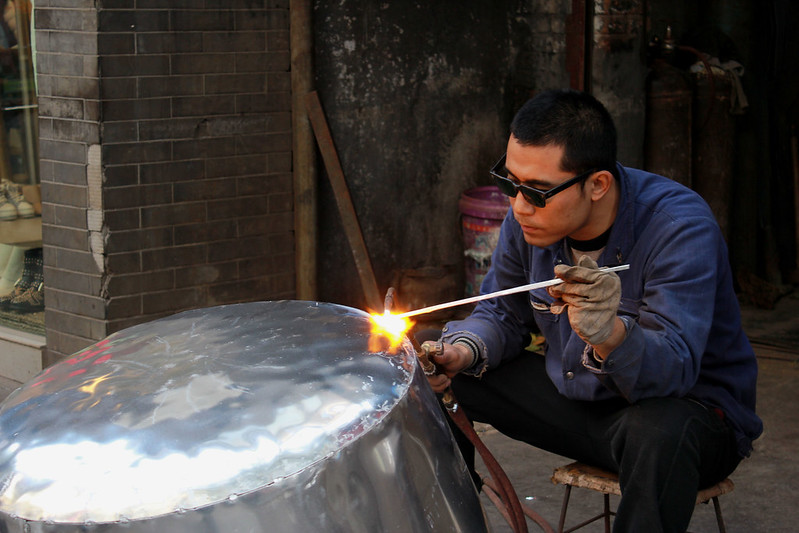 Make sure you come here hungry though, because you will want to eat everything. 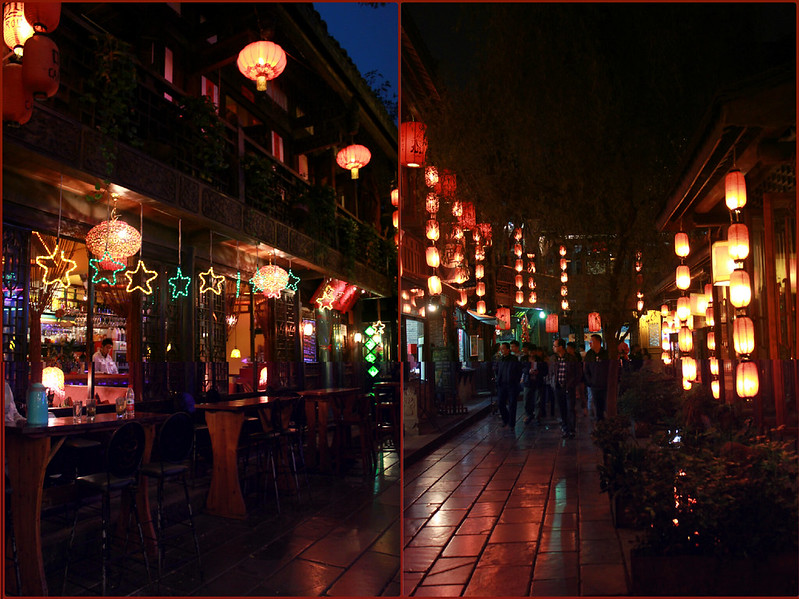 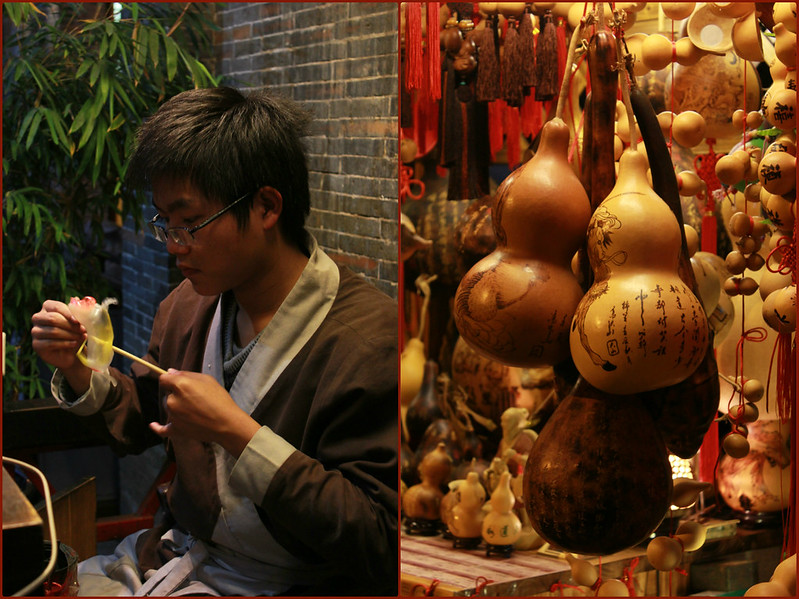 Mingle amidst locals and tourists alike as they browse porcelain and folk handicrafts, and locally-produced clothing and art work.  There are also plenty of tea shops and eating establishments to tempt you in. 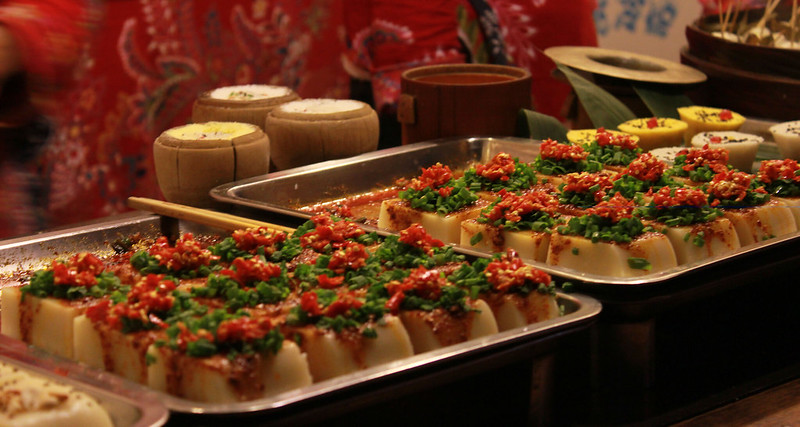 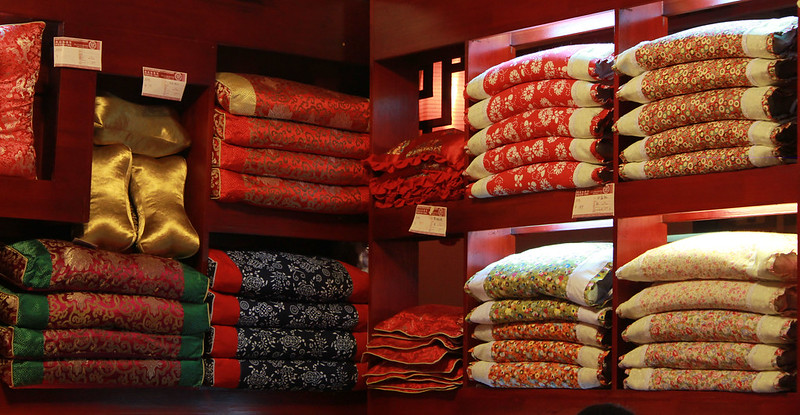 Towards the end of the street there’s a bridge that passes over a pond containing thousands of goldfish, as well as a traditional tea house that showcases daily performances of Sichuan Opera.  This is not opera as we know it in the UK and was one of the most entertaining and beguiling live performances I’ve ever seen in a foreign country. 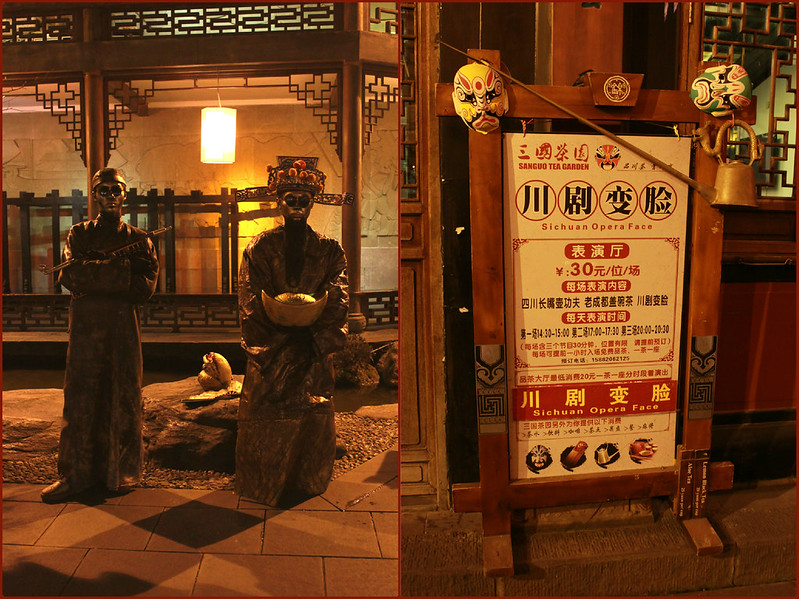 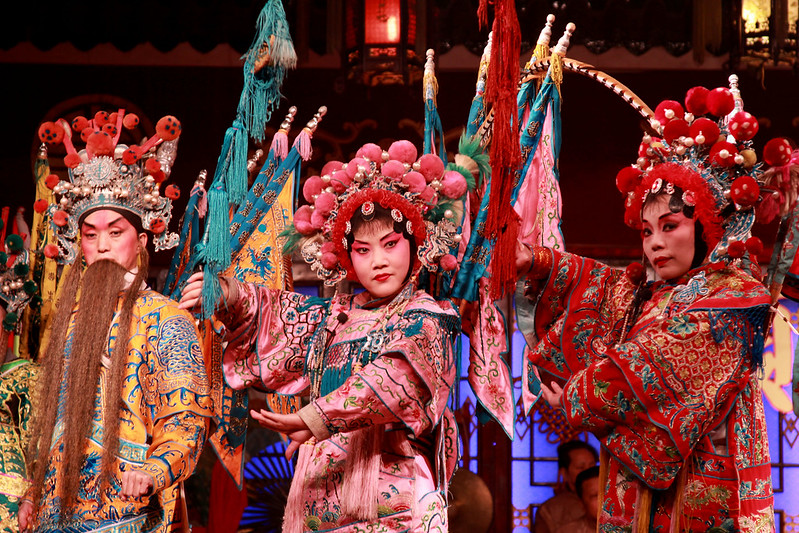 There are also some fantastic markets scattered around the streets of Shanghai, selling everything from antiques (look up Dongtai Road Antiques Market) to peanut brittle – which, incidentally, is some of the best peanut brittle I’ve ever tasted. 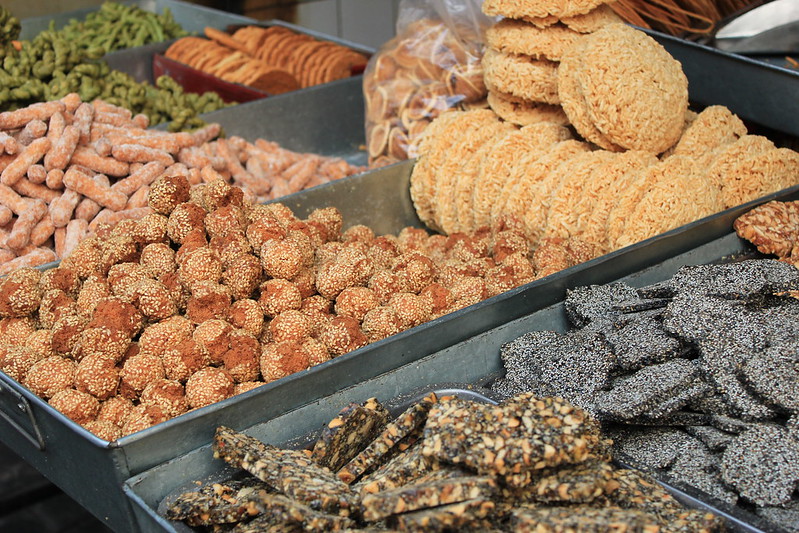 What you probably won’t read much about online is the darker side to the food and livestock markets, as we witnessed in Yangshuo.  Unfortunately the rumours that you’ve heard about the Chinese eating cats and dogs, aren’t just rumours.  I adore animals (the main reason I stopped eating meat when I was just 13 years old) and it broke my heart seeing about three or four cats squeezed into cages that were barely large enough to accommodate one, the resigned expression in their eyes foretelling their fate.

According to our guide, had we visited just five minutes earlier we would have witnessed the purchase of one of these cats, an image that would have stayed with me forever.  I’ll give you a clue – the cats aren’t killed until that moment when money is exchanged in an agreement to buy.

I couldn’t bring myself to photograph the cats (or dogs for that matter; which is why the photograph below is of rabbits) but our guide informed me that even if I had been able, the act of doing so inside these markets is forbidden.  That in itself raises innumerable questions about the legality of the trade, but that’s perhaps a topic for another blog post. 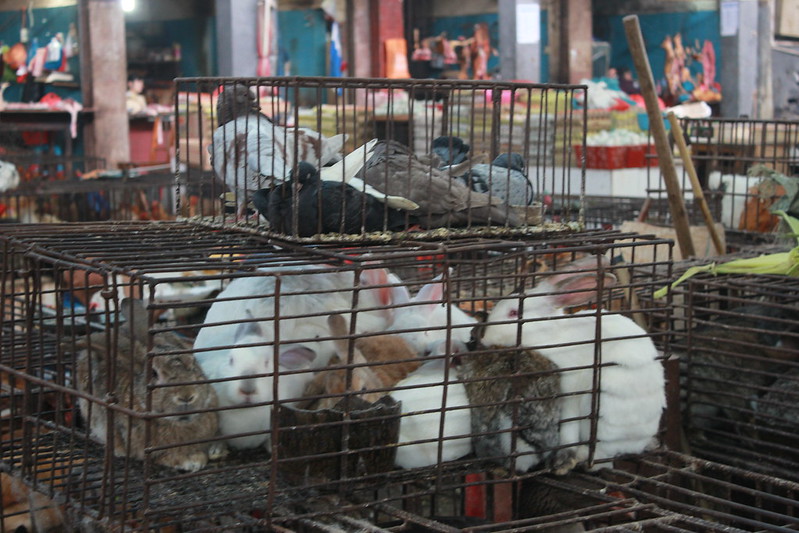 As this post has hopefully illustrated, China’s markets are as diverse, complex, and compelling as the country itself.  They’re certainly not for the faint-hearted or weak-stomached among us, but they will teach you a lot about Chinese history and culture, and that’s what I loved the most about visiting them.

Do you like visiting local markets when you travel?  What’s been the most interesting, surprising, or shocking one you’ve visited? 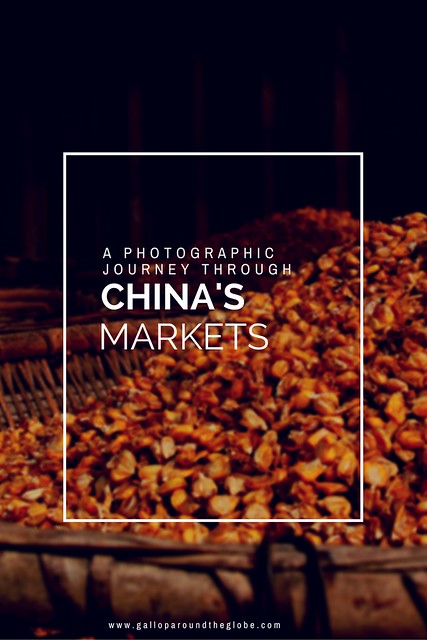 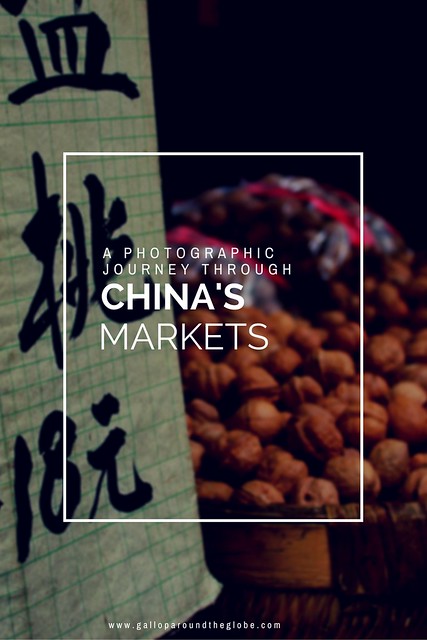 Cappadocia: a balloon flight over a surreal, volcanic landscape

Blog At The Beach: Takeaways From A First Timer

Pockets of Tranquility in Bustling Beijing – Gallop Around The Globe

I thought my pumpkin quest was doomed after I disc