Chefchaouen: The Blue Town in Morocco that’s a Delight to Photograph, Even in the Rain

When you visit somewhere in the off-season, you know that there’s always the chance of bad weather.  But you’re prepared to take that risk, because there are the guaranteed benefits of lower prices and fewer tourists.

The average temperatures in northern Morocco at the end of February and into the beginning of March were around 15 degrees celsius, with seven sunshine hours per day and nine rainfall days per month.

That sounded pretty good to me, considering that we hadn’t seen sunshine for months in the UK and the temperatures in London when I left were hovering around zero.

Little did I expect to be greeted with torrential rain when I arrived into Fes in the early hours of the morning, and for it to be raining so heavily for the entire duration of my stay in Chefchaouen that I contemplated aborting the entire mission and returning in summertime.

I also hadn’t come suitably dressed for persistent torrential rain, in a town that’s not structurally equipped to deal with so much of the wet stuff landing in such a short space of time.  Water was running in torrents down the narrow cobbled streets, forming huge puddles in all the places it had nowhere to drain away (which, by the way, was everywhere).  Wellington boots were actually the only type of footwear that would’ve cut it around Chefchouen on the second and third of March this year. I only had my Rocket Dog Converse-type shoes, which – as I soon discovered – are about as waterproof as a sponge..

Fortunately though, Chefchaouen is a delight to photograph, even in the rain. 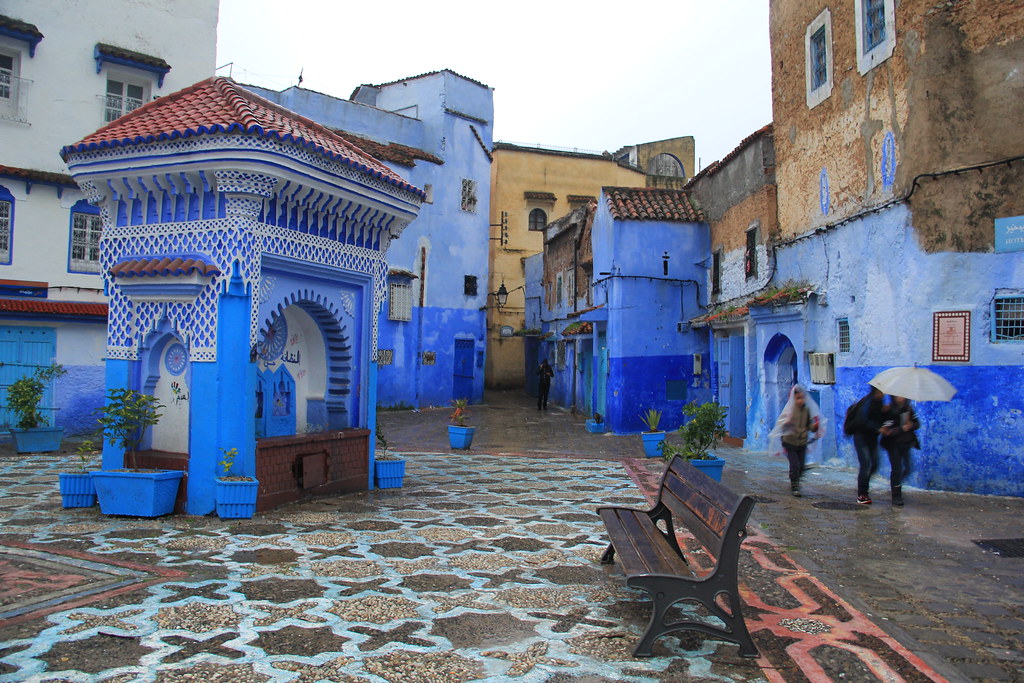 A little bit about Chefchaouen

You’re probably reading this either because you’ve visited the town before or because you’re intrigued to do so, so you might already know a little bit about Chefchaouen.  But in case you don’t, Chefchaouen is a town located in northwest Morocco, just over 100 kilometres inland from Tangier.  Although it boasts a stunning location at the foot of the Rif mountains (its name, incidentally, means “look at the peaks”), the real reason Chefchaouen has earned its fame is because the whole of its old medina is painted blue.

And I’m sure this is the main reason a lot of people (including me!) decide to visit.

So, why is the town painted blue?

It’s at this point that I suddenly feel the urge to be a panelist on QI, frantically waving the “nobody knows” sign (if you haven’t watched QI, you should.  Although the ones with Stephen Fry as host are definitely better).  Because, whilst there are several theories, nobody really knows why Chefchaouen’s old medina is painted in various different shades of blue.

The theories I’ve found on the net are as follows: 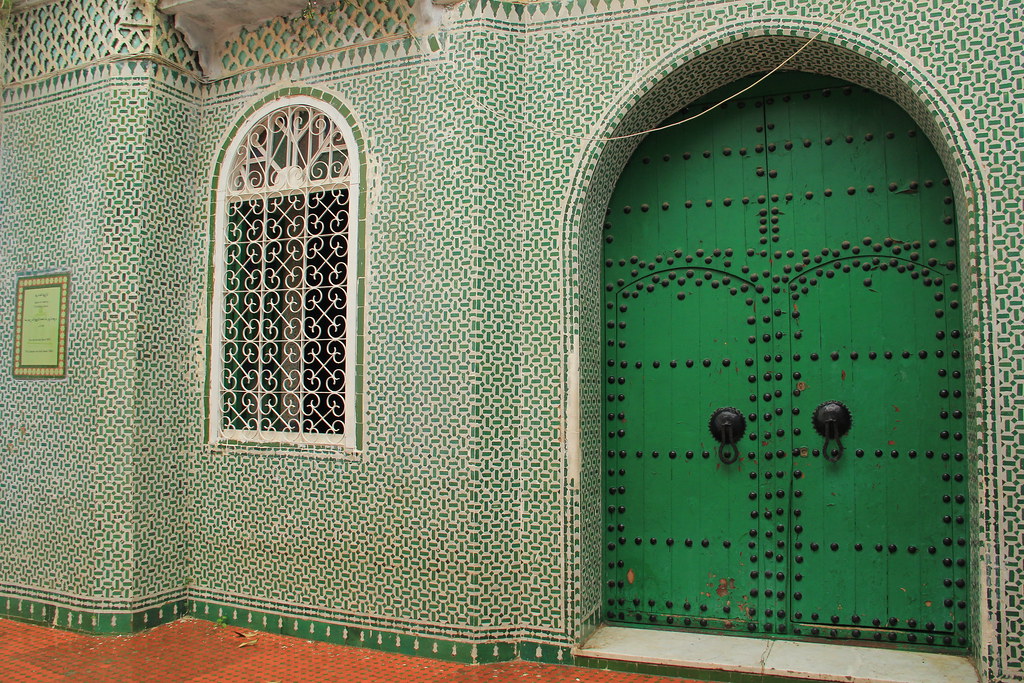 What’s the best way to explore the town?

Honestly? Put down your map and get wonderfully lost.

I found the most photographed street in Chefchaouen (which I recognised from photos I’d seen online, and from the long line of tourists waiting their turn to pose on the steps), made a note of its name (“Callejon El Asri” from a plaque on the wall), and then attempted to geotag it on both Facebook and Instagram later.  Nope, it wasn’t on Google Maps. 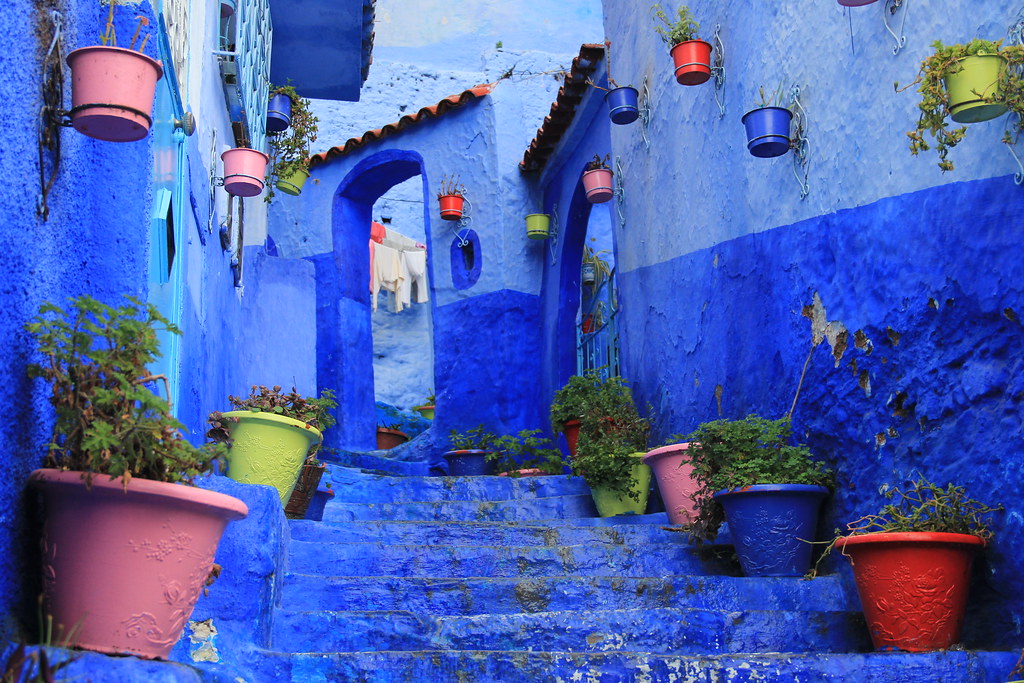 Although it rained continuously during my two days in Chefchaouen, the rain did ease off a little on the second day and the skies brightened up a smidgen.  For this reason, I decided that it would be a good idea to revisit all the spots I’d discovered the day before, in order to better capture them on camera.  Of course, I couldn’t find any of them.

Chefchaouen’s Medina is more disorientating than Granada’s Albayzín. In the words of Bono, “I still haven’t found what I’m looking for.” But I have found breakfast. And cats.

I’m sure that, should you be fortunate enough to spend longer than two days here, the jigsaw pieces that make up the town’s medina would slowly start to fall into place (it is, after all, tiny compared to Fes’ version).  But for a short stay, it’s nye on impossible to successfully find your way around the confusing blue labyrinth.

Anyone who knows me knows how much I love cats.

Before even arriving into Chefchaouen I’d read about and seen photographs of, the medina’s cat population and immediately I found myself drawing comparisons between Morocco’s Blue Pearl and Istanbul – a city well-known for its population of well-loved feline friends.

Whether they’re tiptoeing along walls, peeking through railings, sitting on steps, in doorways, or beside restaurant tables looking up expectantly at hungry diners,  Chefchaouen’s cats are an intrinsic part of their surroundings.  I think it’s safe to say that – aside from all the shop owners and tourists – I saw more cats than people inside the medina.

Every doorway is unique and beautiful

Whether plain and humble or intricately detailed, arched, rounded or square, every one of Chaefchaouen’s doorways different to the next.

I made it my mission to snap as many photographs as possible, in order to compile this collage. 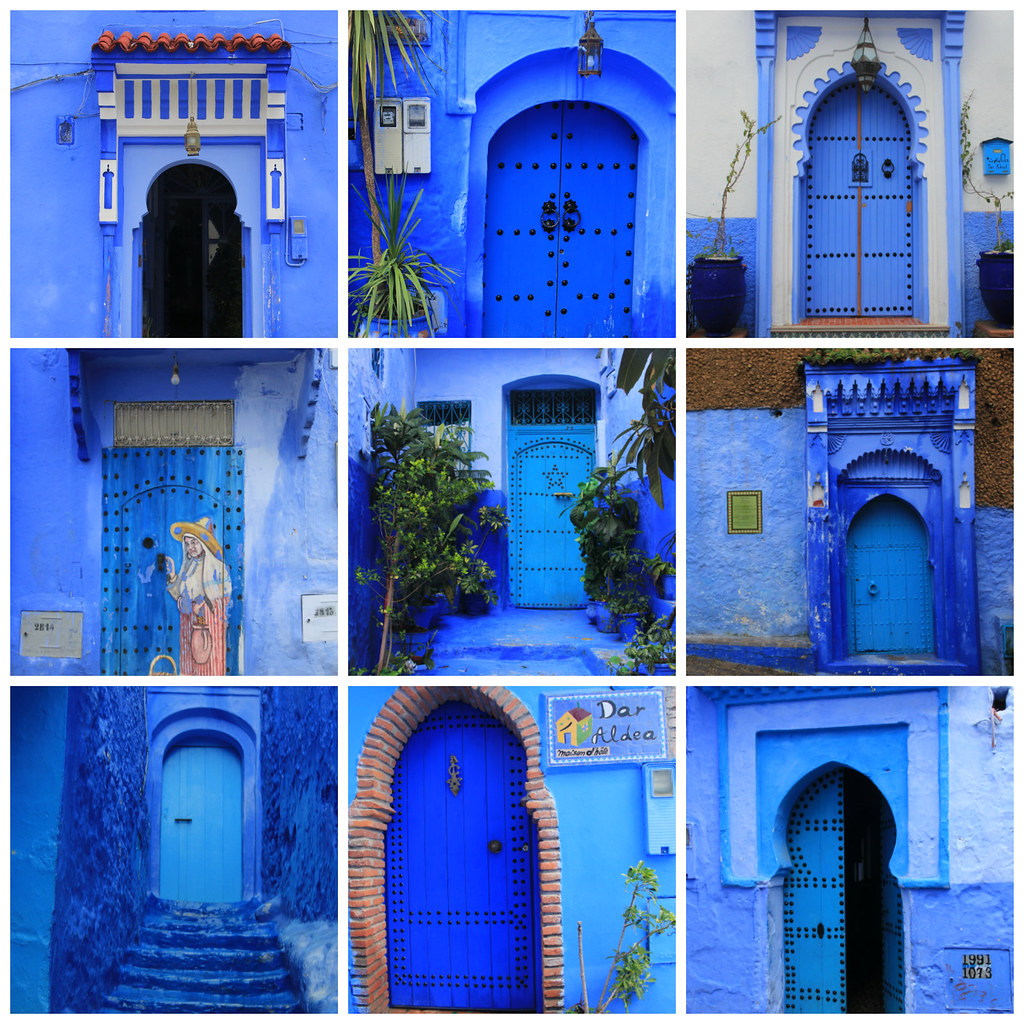 The vibe is relaxed and hassle-free

As if to accentuate this fact, the fragrant aroma of marijuana follows you around everywhere you walk.  The surrounding countryside is renowned for being a prolific source of kief (Cannabis) in Morocco and whilst I wasn’t offered any here, it is apparently sold all over town (although primarily in the domain of native Chaouenis (people of Chefchaouen)). 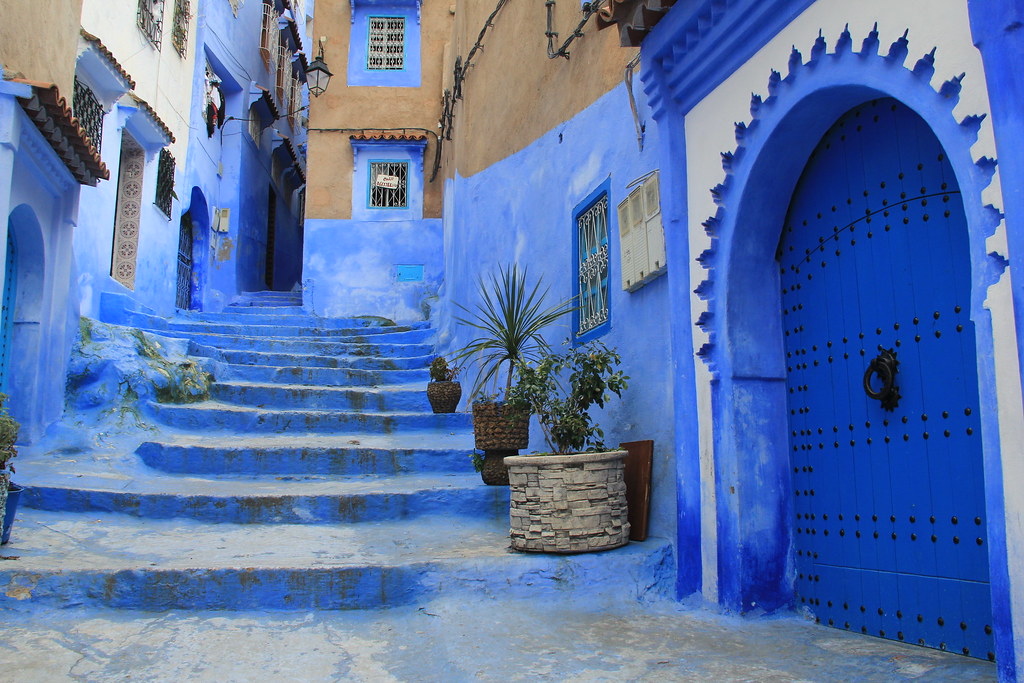 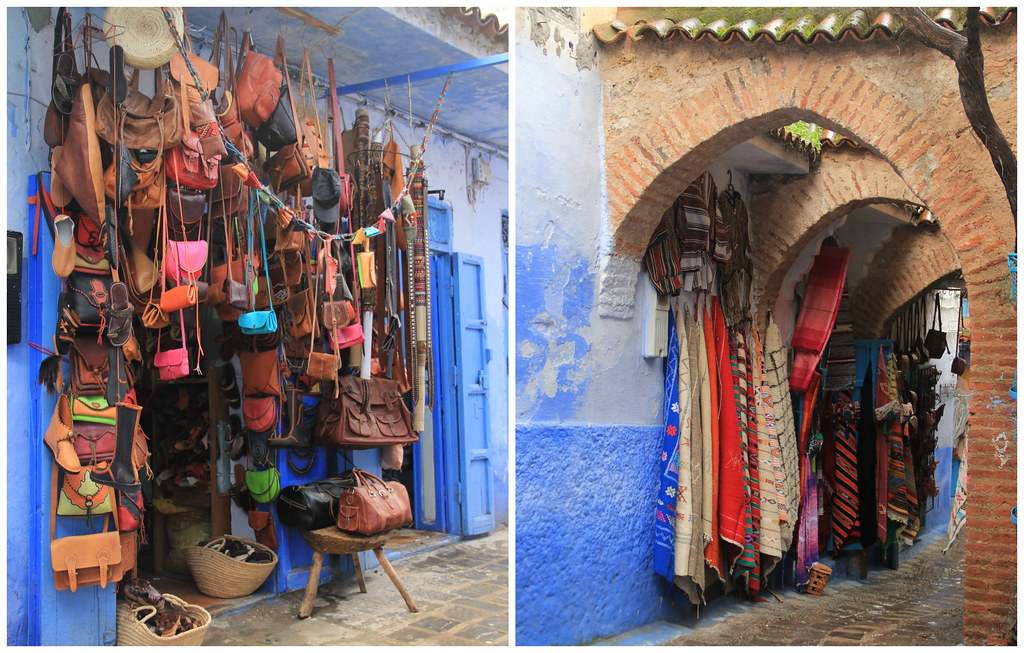 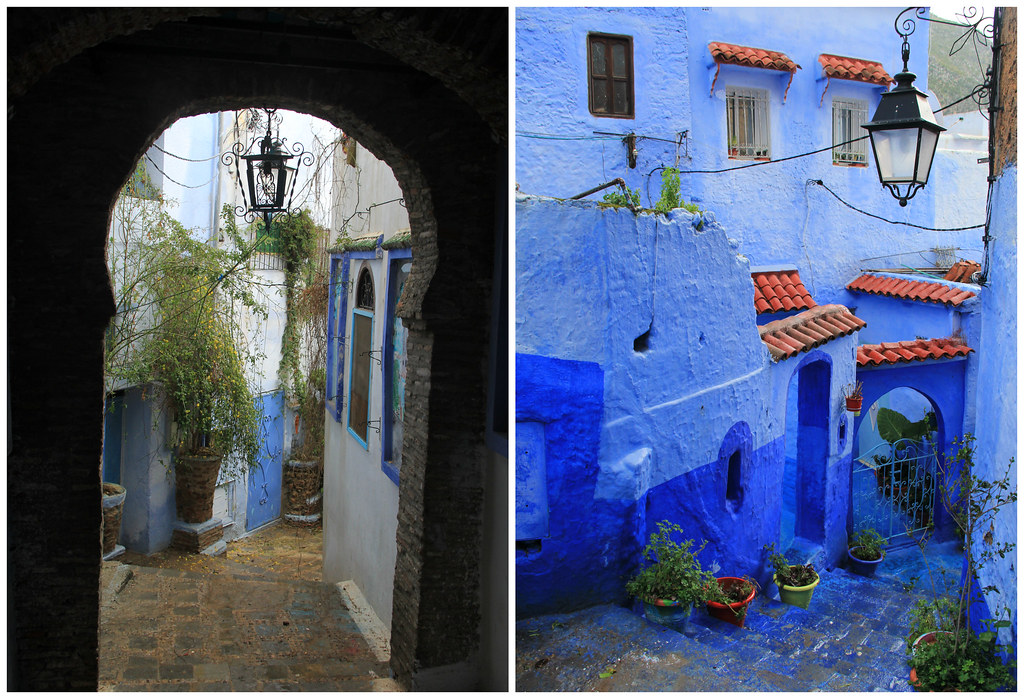 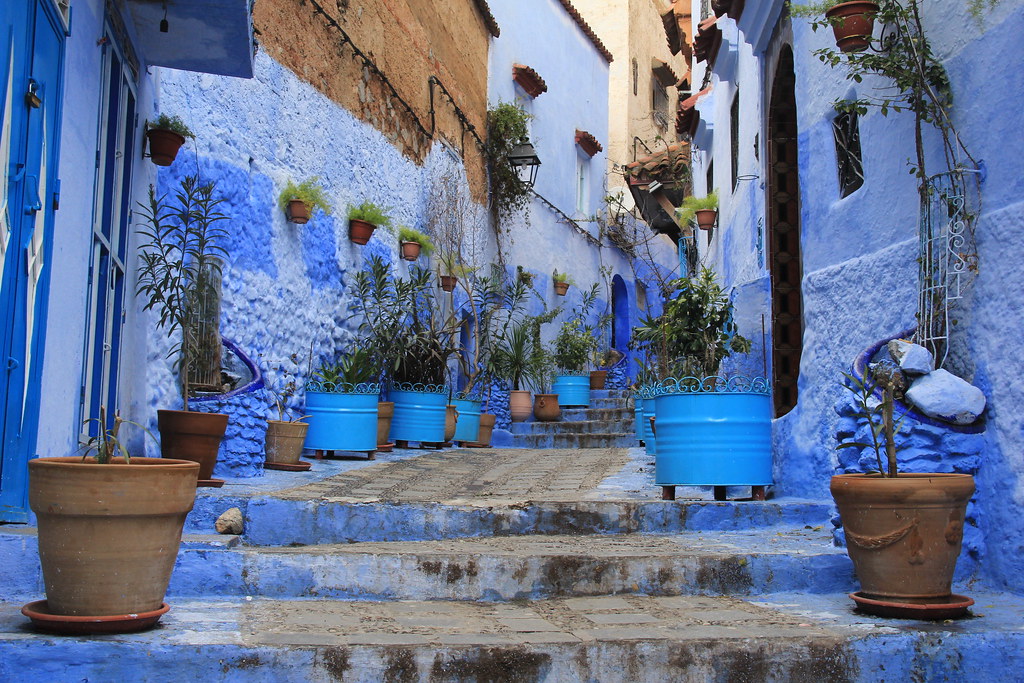 Not only is is served at every cafe and restaurant, but shop owners will often invite you in to share a pot of mint tea with them, or you can warm your hands on one whilst browsing one of the local art galleries.

For those of you who haven’t tried Moroccan mint tea, it’s nothing like the mint tea you’ve likely drank at home.  Most mint tea available in the UK is made from peppermint, whereas Moroccan mint tea is made from spearmint.  It’s a lot smoother and sweeter and somehow offers a much more warming, comforting experience.  I couldn’t get enough of it!

Moroccan mint tea is like drinking a comforting warm mojito, and therefore I love it 😋 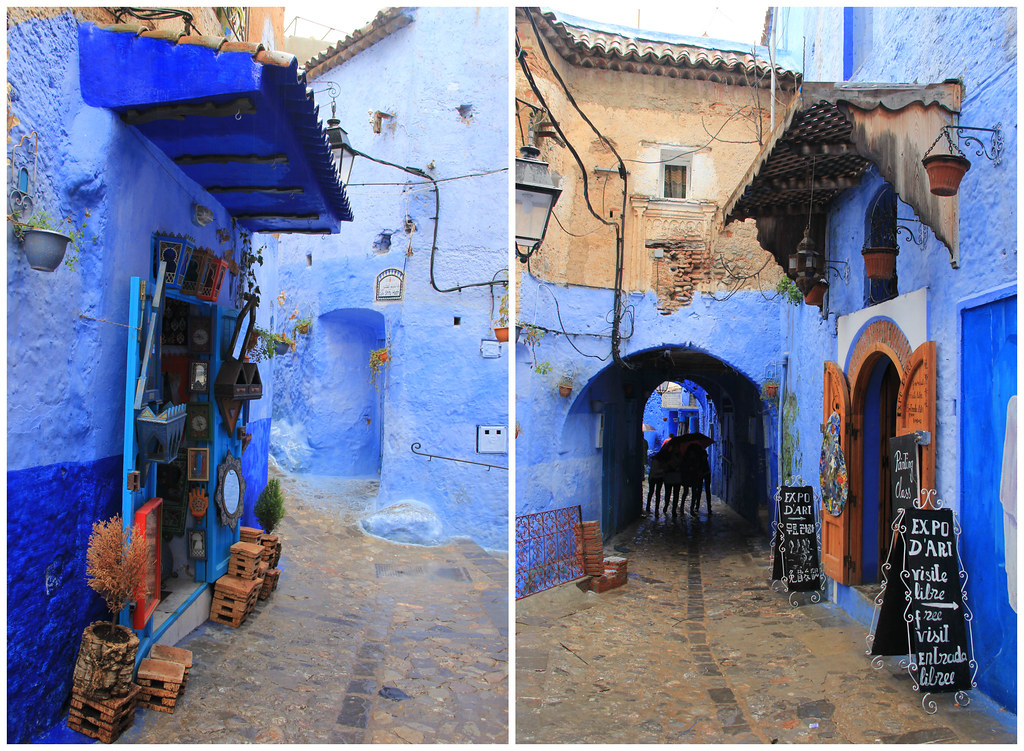 I love cheese and I love salad, so when I read this post by Sylvia and discovered how excited she got about this particular cheese salad she’d eaten in Chefchaouen, I knew I had to sample it and find out first hand whether it actually was that good.

And guys, I can honestly tell you it is!

The cheese salad at Chez Hichamcontains lettuce, spinach,  tomatoes, walnuts, sultanas, and goats cheese, all drizzled in honey and balsamic vinegar.  I ordered it together with Shakshouka (which was actually nothing like the Shakshouka I’ve eaten in the UK, but delicious all the same and went really well with the salad) and two cups of mint tea, and was given some complimentary bread and olives.  The whole bill came to just 80 dirham (£6.26) 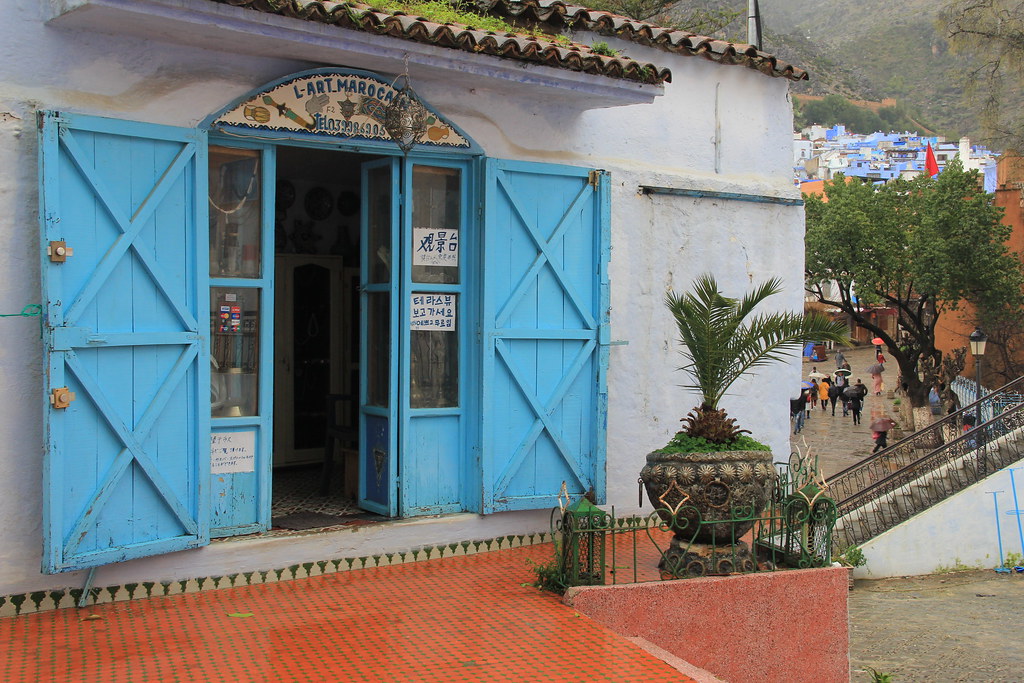 But what is there to actually DO here?

What do you mean, that wandering around aimlessly taking hundreds of photographs of the towns’ pretty streets and decorative doorways  isn’t enough for you? To be honest, I think it would take a good few days (possibly more) for me to tire of this.  But if you’d like to break up your photography expeditions inside the medina, then there are a few other sights and activities I’d recommend:

I stayed at Dar Swiar, a cosy little riad just off the main shopping street that runs up to the main square.  I had my own apartment with  kitchenette, two beds, table and chairs, extra blankets (you’ll definitely need these at night if you visit in March!) and a heater that I fully utilised in order to dry my soaking wet clothes and squelchy shoes.  There are windows that open up to look over the streets below, which must be completely lovely in summer, but not so great when it’s cold and raining heavily outside. 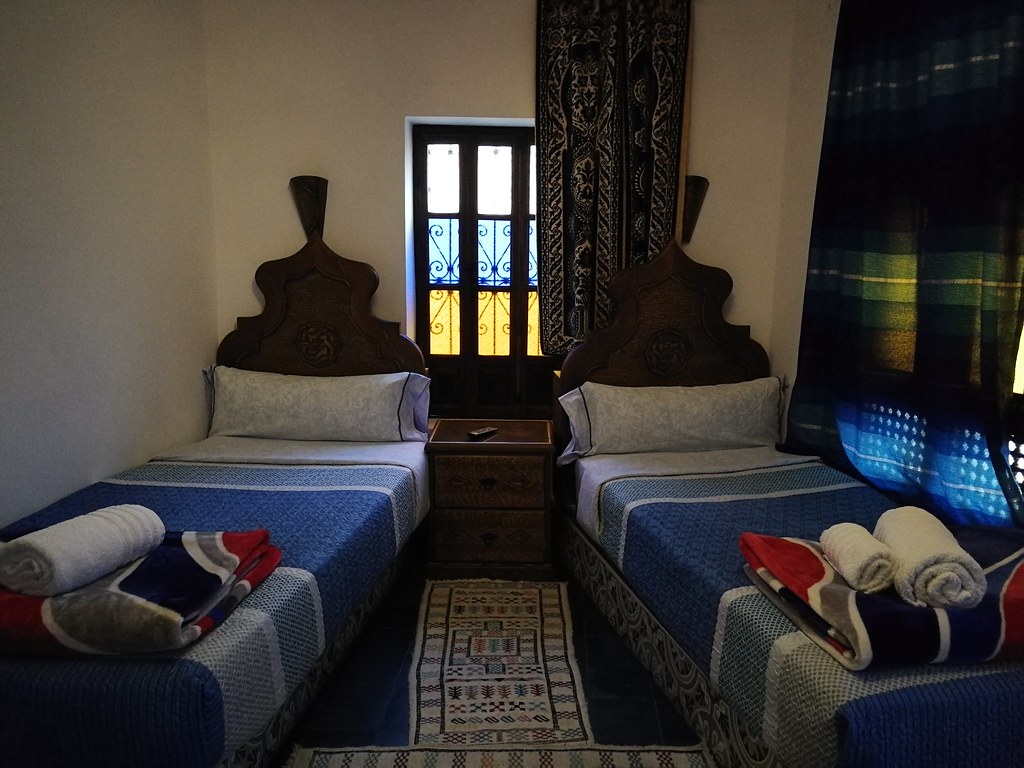 I travelled to Chefchaouen from Fes on a CTM bus for a cost of 75 dirham one-way.  The journey was supposed to take four hours but took nearly five.  There are several departures each day but it’s advisable to book in advance from the bus station just outside the medina.  Book your return journey at the same time as the buses get full pretty quickly.[/box]

And here are some pretty images for your Pinterest boards…. 😀 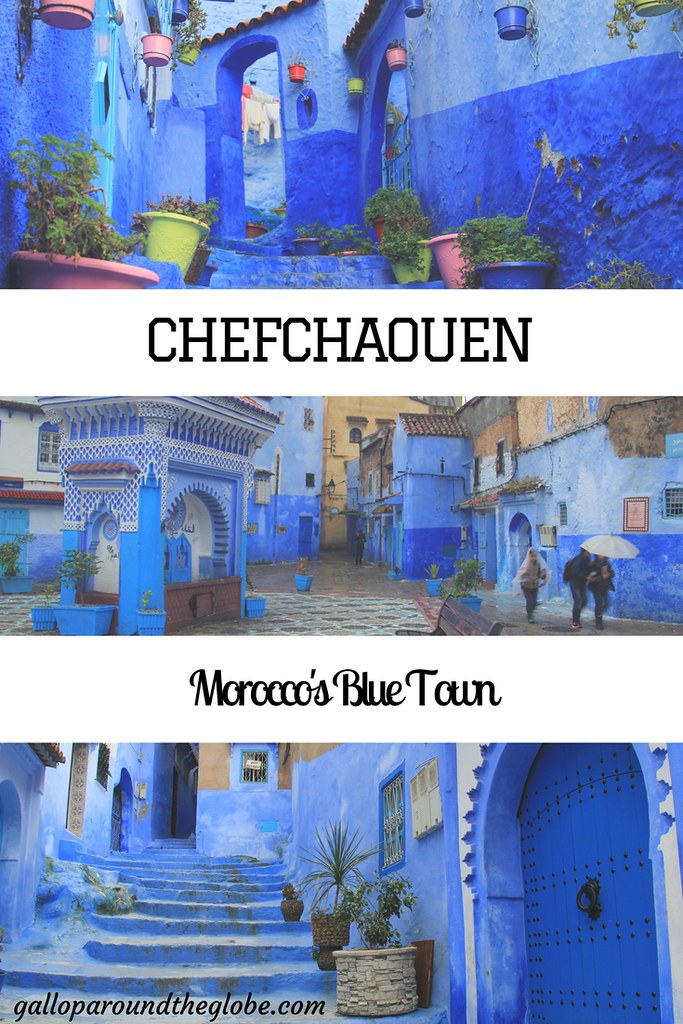 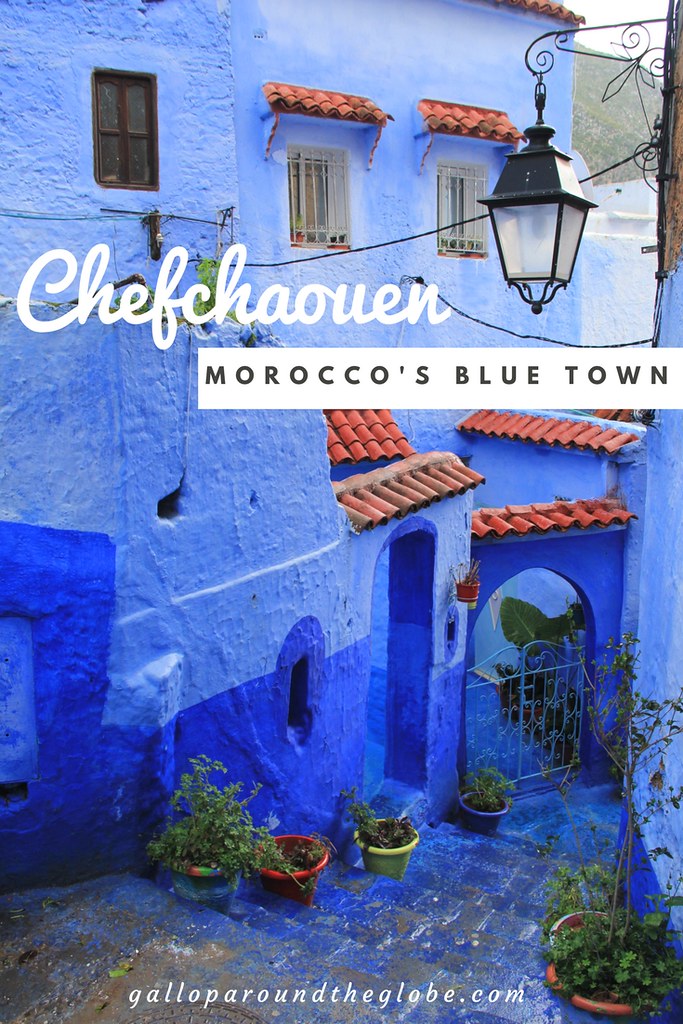 More Than Just a Stopover: 7 Wonderful Things to do in Entebbe, Uganda