If you’ve been to Turkey and enjoyed exploring the valleys of Cappadocia, you may be interested to learn that the towering rock sculptures found at Torre Torre, Huancayo, are Peru’s answer to Love Valley.  Be sure to them to your itinerary of places to visit in Peru. 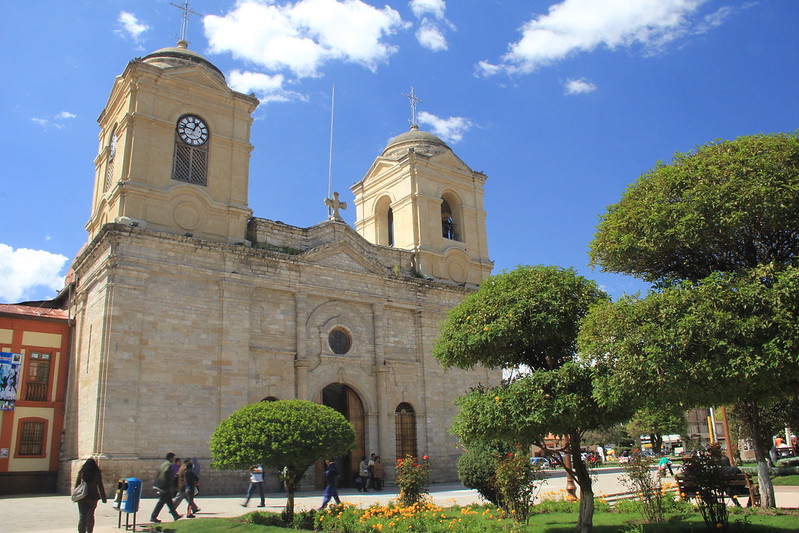 That is, unless you venture a few kilometres outside the city centre, up into the hills beyond Cerro de la Libertad (Liberty Hill), where you’ll find Torre Torre.  Torre means ‘tower’ and a visit here will enlighten you as to why.  Created by nothing but Mother Nature herself, this unique landmark features a series of reddish sandstone pillars that have been left behind following erosion – as a result of wind and rain – of the land which surrounds them.

We’d witnessed similar geological formations at Love Valley in Cappadocia, Turkey, and although those at Huancayo do not exist on anywhere near as large a scale, it still makes for an interesting day trip and is indeed a fascinating sight to behold.  If you enjoy exploring unusual sights and attractions,  it’s definitely one of the great places to visit in Peru. 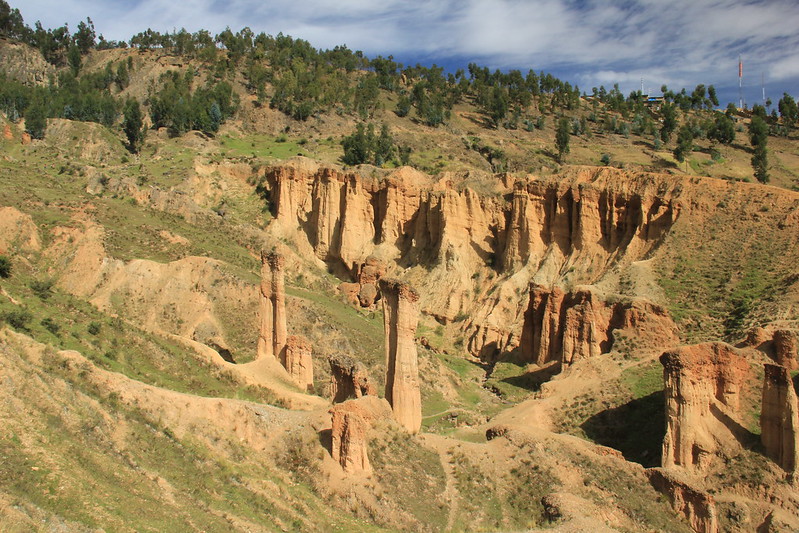 We chose to walk to Torre Torre, following Giráldez as it headed out of town behind the cathedral.  The road was noisy, traffic-filled, and lined with restaurants, cafes, and a multitude of cake shops.  However, the longer we walked and the farther uphill we climbed, the quieter the road became, and the fewer shops and cafes we passed.

Paved roads became nothing more than dirt tracks, and multi-level buildings made from concrete and glass turned into one-storey huts constructed of mud bricks and corrugated metal.  Ladies, hunched over, carried mounds of grasses and vegetables on their backs, dirty-faced children pointed at us and giggled, and stray dogs sauntered around, eyeing us suspiciously and forcing us to keep our distance.  In just 40 minutes, the chaos of the city life had been left far behind us.

Whilst my Lonely Planet guidebook insisted that the route to Torre Torre was well sign-posted, I doubt we’d have been able to find the site had its towers not been visible from the dusty streets below, and had we not loaded a map of the area and pin-pointed an approximate location beforehand.

Despite being ‘discovered’ enough to have featured in our guidebook, a huge part of the appeal of Torre Torre is that it still feels ‘undiscovered’.  Aside from a local man walking his dog, and a couple of kids chasing each other through the labyrinth of towers before them, we were alone at Torre Torre – just us and a jungle of huge, interestingly-shaped rocks.  I couldn’t have been happier. 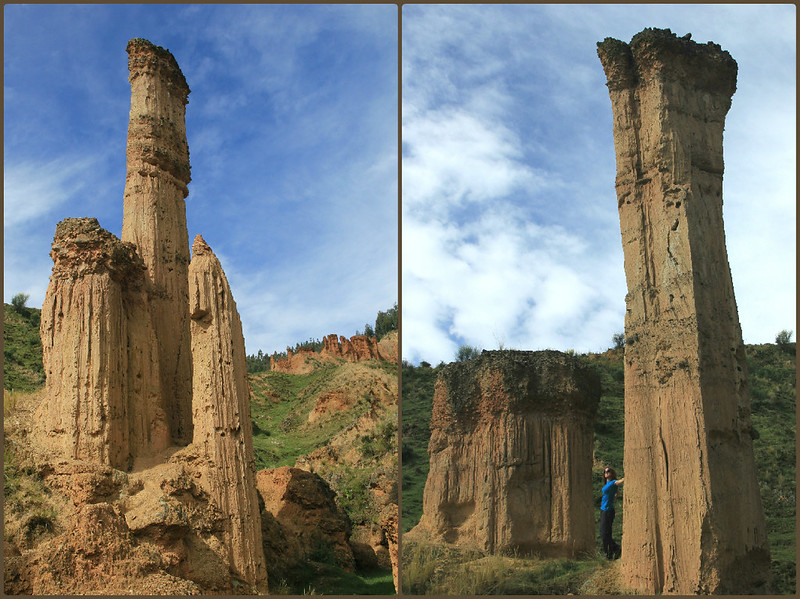 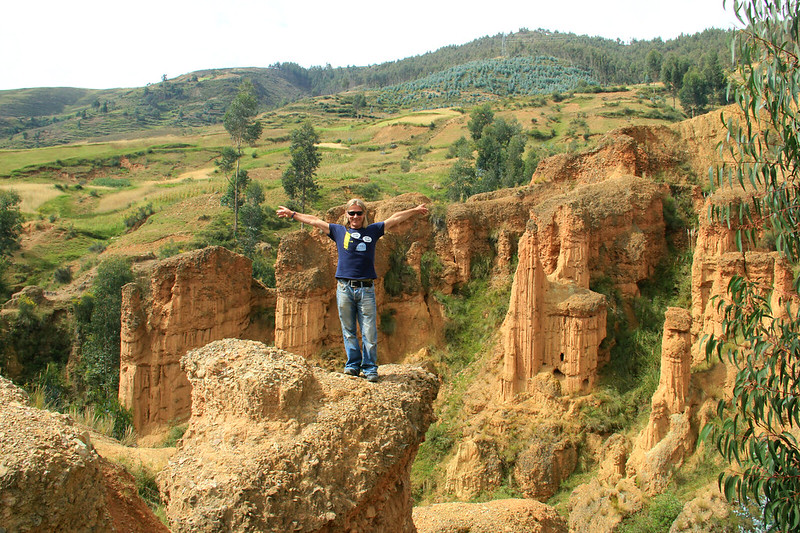 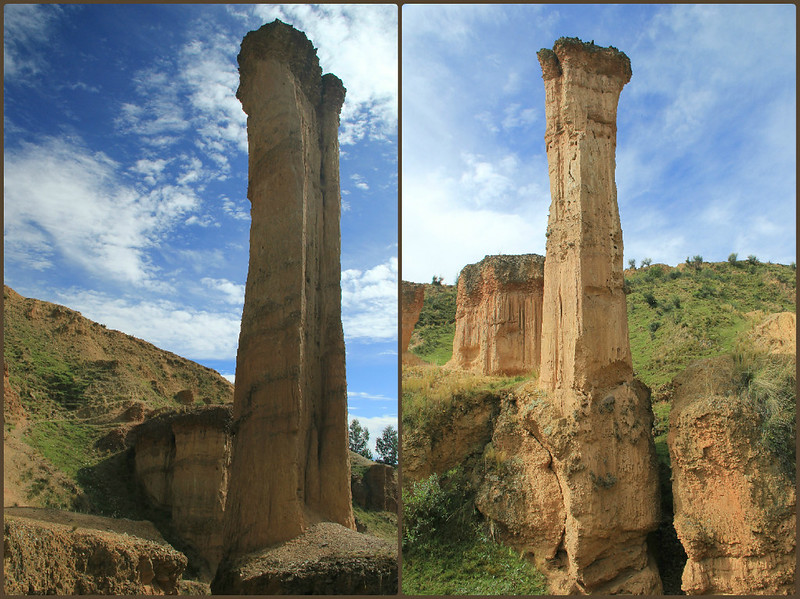 Now let’s just get one thing straight: I was happy looking at the rocks.  I’m not a climber, I’ve got awful balance, and I’m terrified of heights.  For this reason Stu decided that it would be a great idea for me to join him as he bounded from tower to tower, seemingly unaware of the very possible dangers that could befall him.

He decided that facing my fears was the only way I was going to overcome them, which is all well and good when you have safety precautions in place in case you mess up.   But if I misjudged the sturdiness of a hand or foot hold (which I’d already done whilst climbing up to the base of one of the towers for a photograph not long beforehand),  or if I lost my grip, my footing, or my balance, then I could potentially fall a very long way, and there wasn’t a lot in the way of padding to break my fall.

However I figured that at least if I was with him, he may be a little more careful than he would be if he were on his own.  I also knew that if I wanted to get some of those awesome selfie shots with our Go Pro, of us perched on the top of the highest rock in Torre Torre, with the sprawling city of Huancayo down below us, then I’d have to actually make it up on to the highest rock in Torre Torre.

So off we set, climbing back up the other side of the valley, towards the peaks of Torre Torre.  What you can’t tell from these photos was just how steep the climb was in places and how unstable the terrain.  Sandstone is a weak rock.  Given enough pressure, it crumbles in your hands and beneath your feet.

Unless, of course, you’re Stu, who has the balance of a cat and the agility of a monkey.  In spite of plummeting headfirst from a tree and breaking both arms as a child, he doesn’t seem to possess any fear of heights or falling from them.  He made that climb look easy, whereas I was clambering along on my hands and knees, desperately trying not to dislodge any rocks along the way. 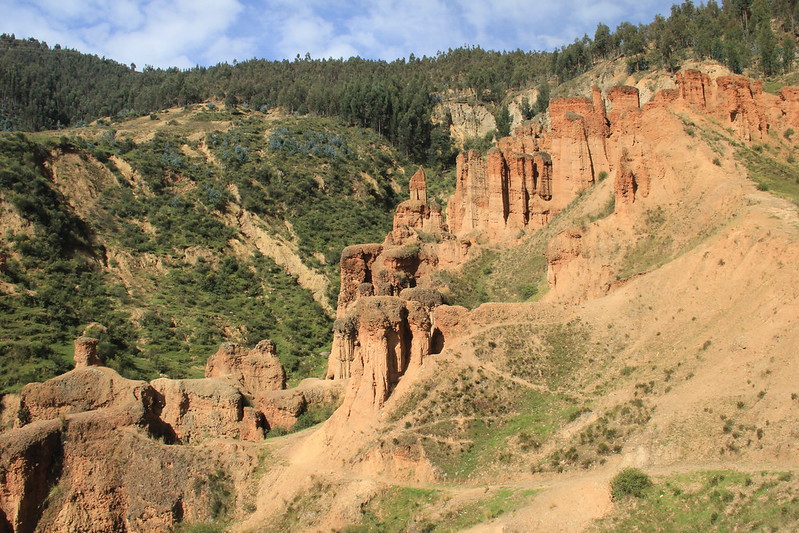 Towards the top he was holding his own balance whilst at the same time supporting my weight as he pulled me up on to the solid caps of the towers.  Where I stood.  Trembling.

But standing up on the solid caps was only the first challenge.  The next was to walk between these towers, on narrow ledges not more than 4 inches wide in parts.  Stu instructed me to walk behind him, holding securely on to his backpack, whilst taking small steps, one foot carefully in front of the other.

I took several deep breaths before announcing that I was ready.

Who was I kidding?  I wasn’t ready at all.  I didn’t even know the number for the Peruvian emergency services should either of us fall.  A Peruvian hospital was not one of the places to visit in Peru that I’d planned to be ticking off my bucket list.

Truth be told, I just wanted to get down.  I wanted to take that Go Pro shot right there and be done with it.  But I couldn’t get down alone (hell, I couldn’t even move; fear had rooted me to the spot) and Stu wasn’t about to quit just metres before reaching our destination.

It didn’t help matters that Stu insisted on making comments about how amazing the view was.  I didn’t know.  I couldn’t see it.  I was too busy looking at my feet, my legs shaking beneath me.   Every time he walked just that little bit too quickly, my heart skipped a beat as I started to lose my grip on his backpack.

I’m not sure how long it took us to make those final steps across on to that last rock where we would stop to take that long-awaited photograph, but it felt like forever.

What you can’t see is how tightly I was gripping Stu’s knee when this photograph was taken.  You also can’t see the sheer 10 metre drop right behind us, and the way I’m gritting my teeth behind that smile.

When I look back at the photograph now, and I realise what an achievement it was for me to get there, I feel proud that I did.  But at the time I was cursing Stu for turning an afternoon of aimless wandering between some unusual rock formations, into a game of fear and endurance.

When I added Huancayo to our itinerary of places to visit in Peru, I never envisaged that my experience there would be quite as challenging and frightening as it had turned out to be! 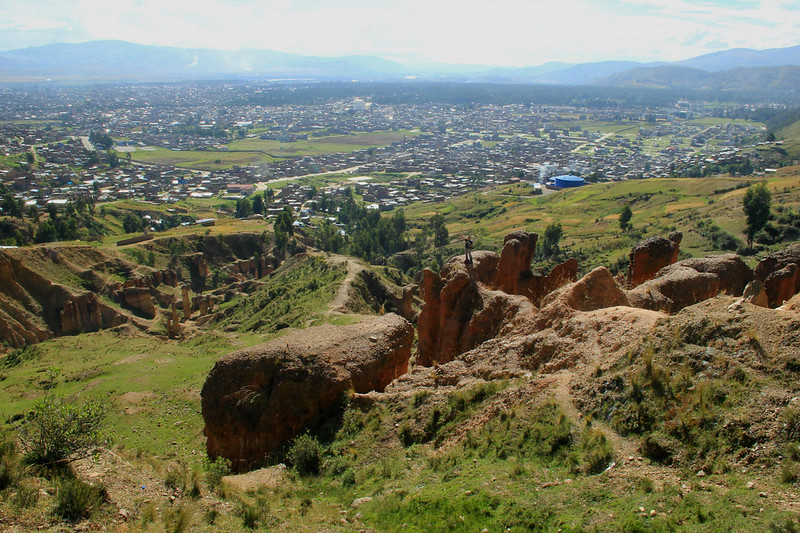 But, I’ll admit it’s not a bad view from up there, and if you look at the above photo closely enough, you’ll just be able to make out Stu, standing on the rock from which we took our Go Pro selfie shot. 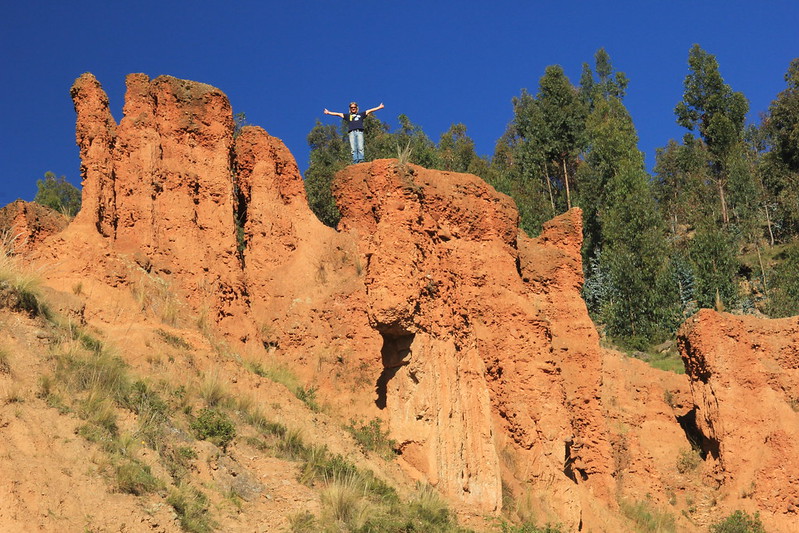 As we finally made our way back down (we’d heard that walking through the dusty streets of Cerro de la Libertad was not recommended at dusk; the dogs have a bit of a reputation up there), past tall eucalyptus trees and over grass-covered rocks, I considered how grateful I was to have stopped in Huancayo and to have had the opportunity to explore this unusual geological phenomenon high up in the hills above the city.

It’s not somewhere that’s hugely publicised when you research places to visit in Peru, but it’s somewhere I very much enjoyed having the opportunity to explore. 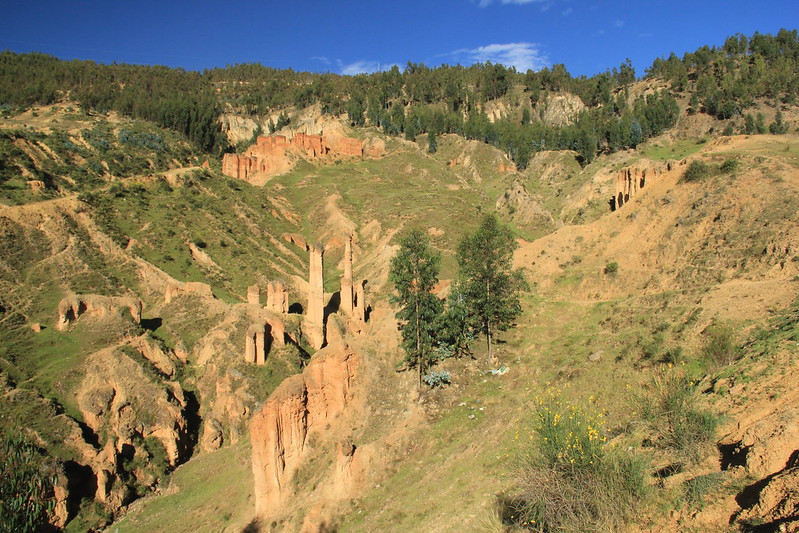 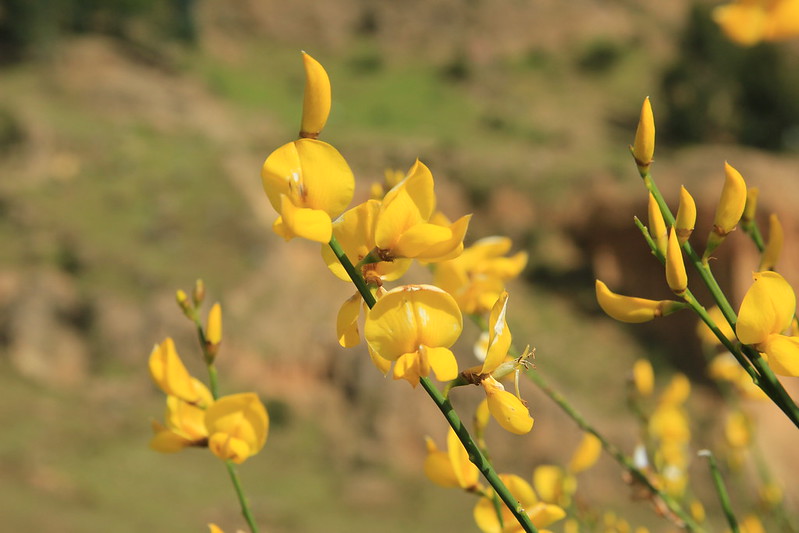 What about you?  Would you be brave enough to climb upon these towering rock sculptures?  or would you choose to take your photographs from a safe vantage point on the ground? as I would have done, had I not had a brave, fearless boyfriend to persuade me otherwise! 😉

Disclaimer: I do not recommend the activities detailed within this post. My boyfriend is incredibly sure-footed and a very good climber, which is why I chose to place my trust in him. But I did so at my own risk.

Leymebamba: Easter Sunday in One of Peru’s most Isolated Towns

Life on the water: Exploring the floating shantytown of Belén

Huancavelica: The Charms of a Lesser-visited Peruvian Mountain Town