I wasn’t expecting to like Tarapoto.  In fact I didn’t have any expectations about the place whatsoever.  Tarapoto was simply the closest populated area that we could fly to from Iquitos in order to re-connect with Peru’s road network, and continue our journey through what I would soon discover to be a vast, diverse and beautiful country.

With a popularion of 65,900, Tarapoto is the largest and busiest town in the province of San Martin.  It straddles the base of the Andean foothills, and sits on the edge of the vast jungles of eastern Peru. 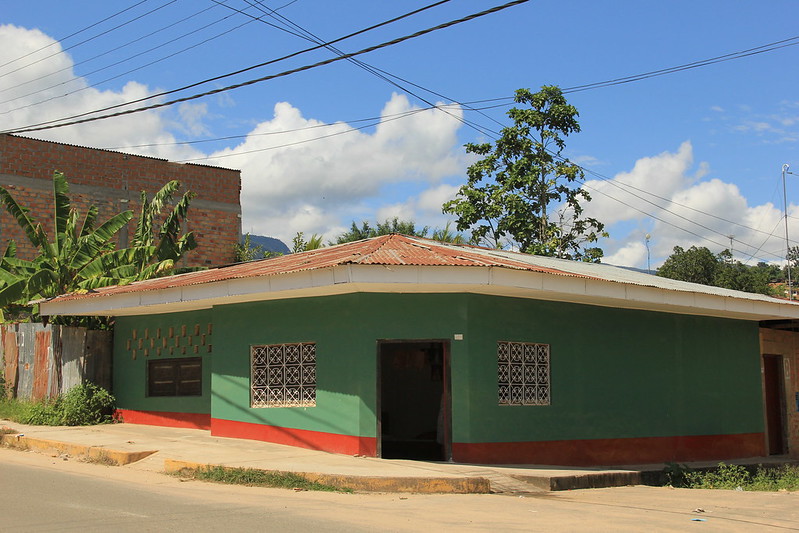 Following a two hour delay at Iquitos airport (exacerbated by the fact that the only cafe in the airport had run out of coffee) and a rather unsettling flight (not sure whether we had poor flying conditions, a inexperienced pilot or a poorly aircraft), we touched down in Tarapoto in the early hours of the evening, and made our way to the hospedaje that we’d chosen for our home that night.

We were greeted by a grandmotherly figure, an elderly lady in her 60’s who smiled, confirmed that yes of course she had availability, invited us in, and then proceeded to rattle away in Spanish, despite our rather vacant looks of incomprehension.

We soon discovered that the only English words she knew were “mind your head” (due to lack of headroom above the stairs to the first floor) and “tour” (due to the fact that as soon as we were settled in our room, she insisted on showing us the brochure of excursions to surrounding attractions, and continued to mention the word every time we saw her.)  Much as I found this incredibly frustrating – partially due to  the fact that I could not fully understand what she was saying, and did not have a sufficient enough grasp of the language to communicate my thoughts in response – I found her rather endearing in an odd, annoying sort of way.  She was very motherly, and in that sense somewhat overbearing, but you could tell that she had the best of intentions, and wanted us to get the utmost from our stay in what I imagine was more than likely her hometown. 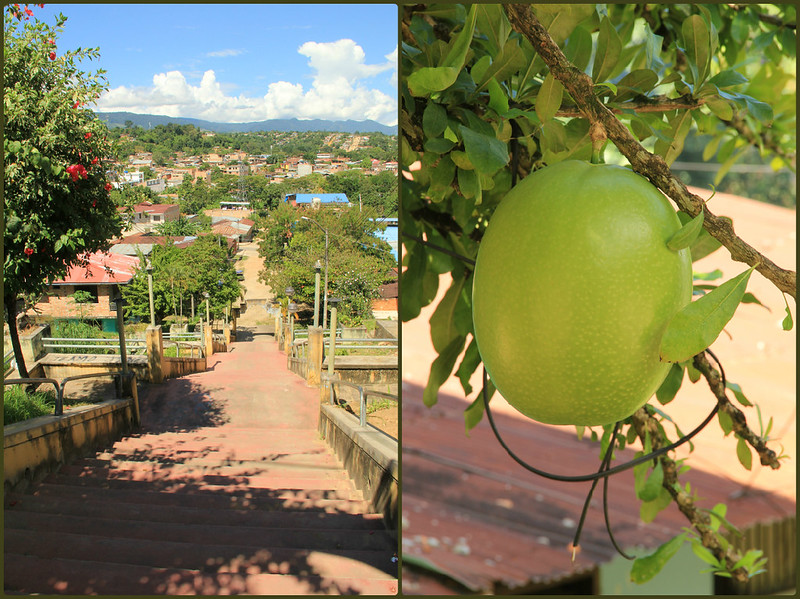 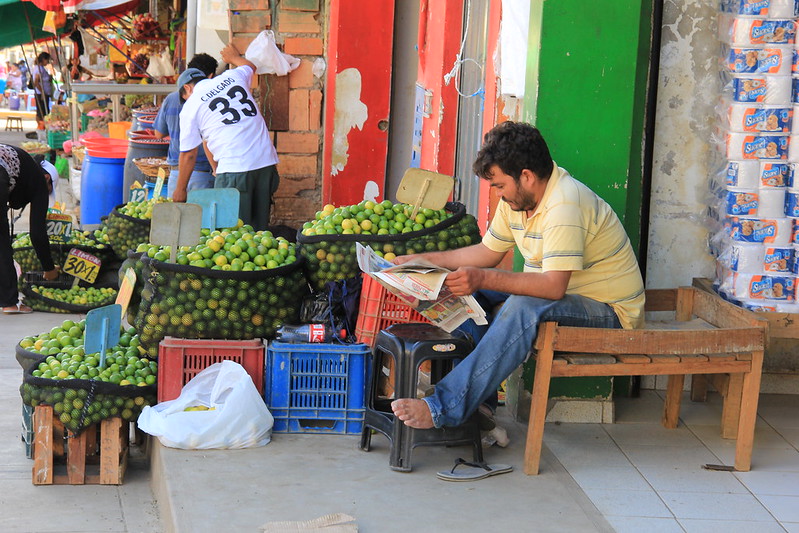 Tarapoto was a very challenging place for us, as it was the first location in Peru that we were unable to communicate with anyone (with the brief exception of a Peruvian guest we met at breakfast one morning who currently lives in London) in English.  It was the Spanish way or the highway, and whilst I can read, write and speak a little of the language (as a result of the GCSE distance learning course I completed the year before this trip), I find it almost impossible to understand anything other than the odd spoken word.

Yet, in spite of this, and also of the overbearing matriarch in our hospedaje, I liked Tarapoto – a lot.

I liked the colourful street art

Those who read my blogs know that I’m a massive fan of street art, and will always get excited by a quality street art discovery in a new town or city.  During our wander around Tarapoto’s streets on our first day here, we found an entire wall covered in colourful pieces by various different street artists (their signatures could be found in the corner of each work of art).  There were also multiple other pieces scattered around the town. 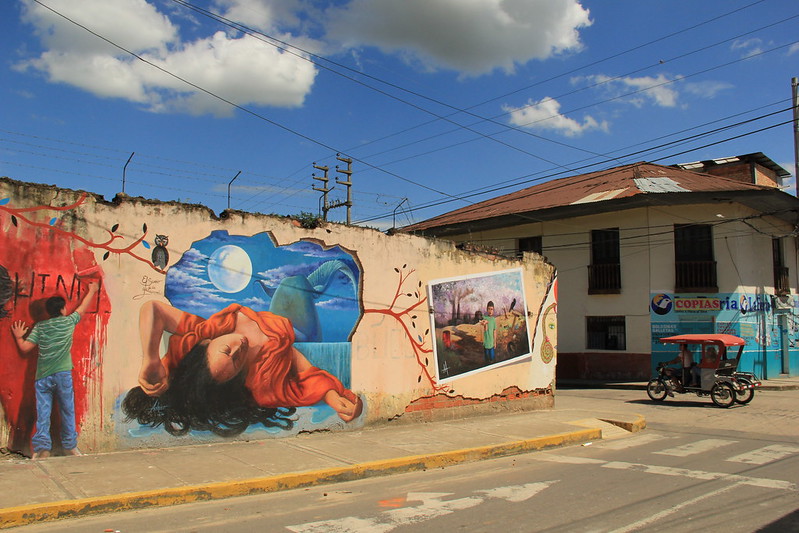 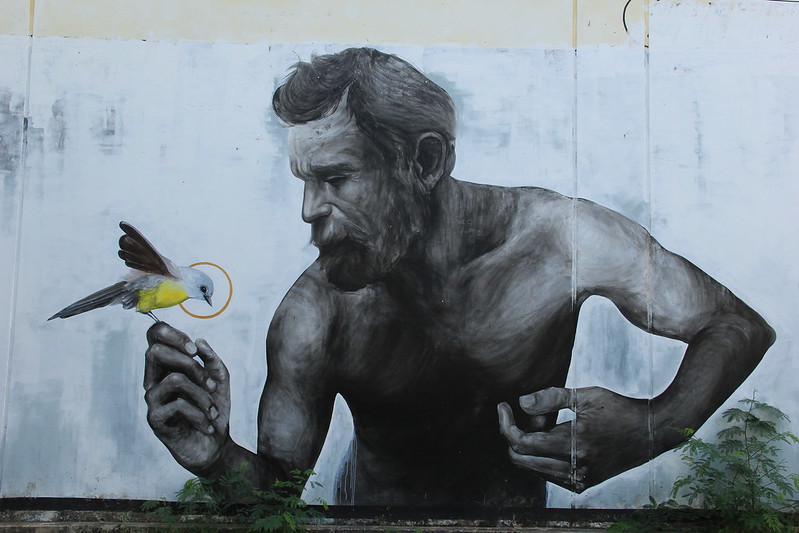 I liked the quality cuisine

Or rather more specifically, I liked the quality cuisine at La Patarashca.  In fact, I just liked La Patarashca.  We came here for food upon a recommendation in our guidebook, and it did not disappoint. The wooden tables have glass tops, underneath which are geometric patterns made from nuts and seeds from jungle.  They look out over one of Tarapoto’s main streets, so you’ve got the tasteful, jungle-influenced decor inside the restaurant, and the hustle and bustle of life in the street down below, as chatter blends with music, and the warm evening breeze carries this wonderful blend of atmospheres upon it.

On the menu you’ll find regional specialities such as Ensalada de Chonta y Palta (a salad made from Avocados and thin strips of the hearts of local palm trees) and Patarashcas (local river fish cooked with tomatoes, sweet peppers, onions, garlic, and cilantro and wrapped in a bijao leaf).

I liked breakfast with a view on the hospedaje terrace

Being uphill on the north-eastern side of Tarapoto meant that El Mirador was surrounding by amazing jungle views in every direction, and what better way to appreciate these than from a hammock on the spacious terrace or whilst enjoying breakfast every morning.  Okay, so we paid 15 soles for breakfast (£3.21) but it was enough to last us all day.  A large ensalada de frutas (papaya, mango, melon, and pineapple) doused with honey was followed by fresh bread with olives and cheese, and scrambled eggs, together with as much tea and coffee as we could drink, AND a fresh fruit juice of our choosing.

I liked the lively nightlife

For a small town, Tarapoto has a great nightlife, which – as far as we could gather – happens at two main bars, which couldn’t be more different to each other.

There’s La Alternativa, Tarapoto’s potion bar.  It’s a dark, slightly seedy kinda place where the shelves are stacked pharmaceutical-style with 7 raices, and 15 other natural concoctions based on soaking jungle roots and vines in cane liquor.  You choose your poison in whichever size vestibule you desire (ranging from shot glasses to medio litres) and sit down to a night of intoxication with your friends.

Secondly, there’s Stonewasi.  On a street which is lined with bars, Stonewasi is by far and away the busiest.  Playing music from The Pixies, Depeche Mode, R.E.M, and The Cure (amongst loads of good old 80’s rock tracks), and serving large bottles of Cusqueña to a lively, slightly alternative crowd, Stonewasi seemed to be THE place to be on a Friday night in Tarapoto.  We were lucky enough to catch an awesome Nirvana cover band, banging out classic tunes such as Lithium and Come As You Are with rock-star style and expertise.  I found myself in my first Peruvian mosh pit, and Stu got interviewed by a film crew because they thought he looked liked Kurt Cobain (if you know my boyfriend Stu, you’ll know that the only similarity is the long(ish) blond hair).  It certainly made for an interesting night though!

On day 3 in Tarapoto we finally gave in to the incessant “tour” requests and booked an excursion to nearby Cataratas de Ahuashiyacu (Ahuashiyacu Waterfall). Ok, so it wasn’t expensive (20 soles – £4.28) but we were under the impression we would be getting an English-speaking guide, and that the tour would include 2 hours at the waterfall.

Now I’m used to being collected in a minibus owned by the tour company running the trip, usually with the tour company logo on the outside of the vehicle, so when a guy turned up to collect us in an unmarked car I was a little dubious. The fact that the gentleman knew our names suggested that this wasn’t an attempted kidnapping, and that this was in fact our tour guide. He didn’t speak a word of English, and neither did the couple I squeezed in the back of the car with. I imagine we were probably given a very interesting and informative commentary about the surrounding landscapes and vegetation, but I couldn’t be sure because I only understood the odd word and phrase here and there. However our guide did manage to take a nice photograph of Stu and I at the mirador (viewpoint) on the drive up to the waterfall, so I’ll give him a few brownie points for that.

A combination of bad timing (it was the weekend) and the fact that the pool at the base of the waterfall was tiny meant that the whole place just seemed overcrowded, which took a large amount of the enjoyment out of it for me. However we did amuse ourselves by watching visitors brave the freezing cold waters all in the name of vanity, in order to get that perfect shot of themselves directly beneath the 40 metre falls – and then promptly did exactly the same.

Tarapoto is surrounded by a number of beautiful lakes and waterfalls (Laguna Azul or Laguna de Sauce was one we would have liked to have visited) but time and money dictated that we only visited Ahuashiyacu on this occasion. Had it not been full of weekend tourists, it would have been a delightful place to spend a few hours, and also incredibly easy to get to independently. Had we known this beforehand I wouldn’t have booked the tour. We only had an hour at the falls instead of the promised two, and I didn’t like being on countdown the whole time we were there. But full marks to our Peruvian matriarch for her pushy sales techniques!

If you’re planning to visit Peru and you get the chance to stop by Tarapoto even only for a day, I recommended that you do. It’s a town I never expected to like, but one which I left feeling rather fond of.

Is there anywhere you’ve visited that’s surprised you in this way? Please share your comments below, I’d love to hear them 🙂

A Rather Bizarre Tour of Ica’s Wineries

Back to Nature in Moyobamba at La Casa de Seizo