For those of you who’ve been to Budapest, or more specifically, its ‘ruin pubs’ – of which Szimpla Kert is the better known – you’ll probably understand the reasons behind my writing a post on the place.

For those of you that have visited Budapest but – for whatever reason – not stepped foot inside one of its ruin pubs, or those of you who are sitting there scratching your heads, asking,

“what the hell is a ruin pub?”

So what IS a ruin pub?

Ruin Pubs – or Romkocsma, as they’re known in Hungarian – began sprouting up in the city over 10 years ago, back in 2001, in the ‘ruins’ (hence the name) of abandoned buildings.  Budapest’s old district 7 neighbourhood (the current location of Szimpla Kert) was once home to a flourishing Jewish community prior to World War 2, but in 1944 Nazi soldiers deported tens of thousands of Hungarian Jews living in the area.   Since then the streets became empty and desolate, and the buildings were boarded up and abandoned, and the area languished for decades afterwards.

No-one could have predicted that from there a hugely successful underground bar culture would emerge.  Where most people saw decline, there were those few who saw opportunity.  Coupled with the desire to find a cheap drinking establishment, and the lure of cheap rent that such places offered, people began to see the potential of these run-down buildings, which had previously been condemned as nothing more than remnants of a past that once existed within their crumbling walls.

Instead of spending money to renovate these buildings, the ruin pub owners celebrated the decay they embodied.  They filled them with rejected furniture from old community centres, cinemas, and grandmother’s flats and invited local artists in to make their mark on the walls; they added a bar, a dance-floor and an outdoor seating area.  Slowly but surely Budapest’s 7th district was beginning to come back to life; it was starting to find its soul again.  A new genre of nightlife was developing within the city.

If it had not been for the questions I’d asked the incredibly helpful girl at Lavender Circus Hostel, I would not have discovered this mother of all ruin bars.  Guidebooks are great for highlighting the city’s best attractions, and informing you about costs and transport links, to enable you to fully enjoy them.  And they often do have some fantastic restaurant and bar recommendations.  But there’s nothing better than asking a local at the end of the day, and especially a local who works at a quirky, bohemian hostel right in the heart of central Budapest.

Szimpla Kert (meaning “Simple Garden”) doesn’t look much from the outside.  The brickwork doesn’t look like it’s been touched for years and the wooden window frames that were once painted, are now rotting, soon to be rendered incapable of housing the glass panes they now surround.  The wrought iron balcony is perhaps the only evidence of the grandeur these buildings once held, but it’s now rusty, and only a few pot plants and a couple of brightly coloured hurricane lanterns provide evidence of life within.  A small inconspicuous yellow sign hangs above the door.

As you walk through the innocuous entrance, it’s almost as if you’ve entered another realm entirely.  Inside are a collection of indoor and outdoor rooms and terraces spread over several floors, and off each corridor and under each stairwell is yet another hidden room.  It’s a place that oozes character; it’s dimly-lit but colourful, it’s noisy, intriguing, eclectic, quirky, edgy, trendy, genial, relaxed, bohemian, underground, nostalgic, spacious and exciting – in equal measures.  It’s difficult to know which area of this fascinating establishment to explore first.

In the large outdoor courtyard (off to the right as you enter), old bicycles hang suspended in the air above, an array of plants are scattered amidst a mismatched collection of chairs and tables, and scenes from a black and white movie are projected on to the back wall.  There is the front half of a mini which you can sit inside, and the bonnet has been hollowed out to create a bench seat on the front of the vehicle as well.  There is also an old Trabant – East Germany’s answer to the VW Beetle – which has been colourfully decorated, and which drinkers vie for a seat in, on a busy Friday or Saturday night.

The courtyard opens on to a maze of rooms, each decorated differently.  In one, ancient-looking computer monitors and television sets are mounted to the walls, with moving kaleidoscope patterns decorating their screens, creating light within an otherwise dimly-lit room.

In another, an old cast iron bathtub has had one side sliced out of it in order to create a makeshift sofa, and a foam mattress covered in a Terry Towelling sheet lines its base.  Artwork and graffiti cover the walls.

Much more than just a pub

Not only does Szimpla Kert serve cheap beer in one of the coolest drinking establishments I’ve ever come across, but it also holds a Farmer’s Market every Sunday, is home to regular art exhibitions and film screenings, and hosts an array of live music (we saw a lively Hungarian folk band there) as well as D.J sets at the weekends.  It’s a perfect place to unwind on a warm summer night after a busy day of sightseeing, and also one of the best places to meet people in the city.  What’s more, they serve some of the most delicious pizza here from their wood-fired oven.  Not only does it taste amazing but it’s also priced to suit a backpacker’s budget – perfect to line your stomach before a night of drinking or for when you get the munchies at 3am.

What is the future for Ruin Pubs in Budapest?

With more people flocking to the area as a result of the success of Budapest’s Ruin Pubs, developers have started tearing down buildings en masse, and constructing upscale apartment complexes, and trendy restaurants and boutiques in their place.   Maybe there will come a time when there is no place for Ruin Bars as they currently exist.  Judging by their popularity (Szimpla Kert was voted the 3rd best bar in the world by Lonely Planet in 2012), I doubt that they will be swallowed up by gentrification completely, but this is a transitional period for the city which means that they may well be forced to change the way in which they operate.

Even if you don’t drink, Szimpla Kert is somewhere you must visit.  Go there to marvel at the eclectic decor, and to explore a popular and totally unique aspect of life in Budapest, because before long Budapest’s Ruin Pubs as they exist now, may be as much a thing of the past as those crumbling, abandoned, derelict buildings from which they originated in the first place. 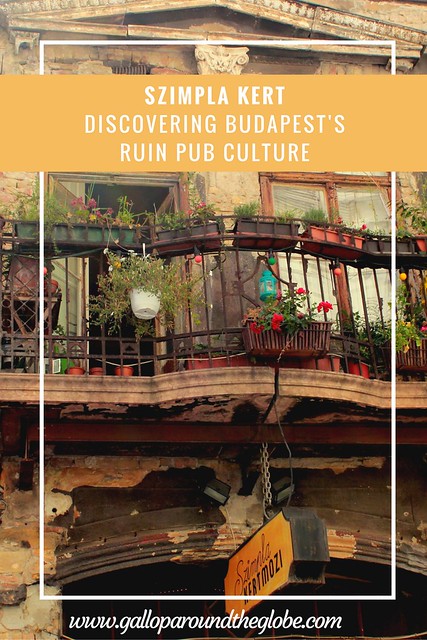 Beneath the Ionian Sun: Life on the Greek Island of Paxos

The Summer Palace in Beijing: A tranquil spot amidst the chaos

Sharing My Love Of Travel: A Giveaway