Snapshots of Lisbon: My Favourite Parts of the City

Despite the fact that this blog has been running for a little over three years now (I can’t quite believe it; where has all that time gone?), I still have not managed to write about all the places I’ve visited in that time, let alone all those I explored before Gallop Around The Globe was conceived.

Lisbon is one of those places.

I absolutely loved my time in the city.  I loved exploring the Alfama, Castelo, Belem and Sintra, riding on the trams and funicular railways, sampling the local delicacies, drinking Ginja and giant Mojitos, and soaking up the live music and nightlife in the Bairro Alto until the early hours of the morning.

Yet for some reason I’ve never gotten around to documenting my visit on this blog.  Until now.

A little bit about Lisbon

Lisbon is Europe’s westernmost capital city, spread over a string of seven hills north of the Rio Tejo (Tagus River) estuary.  Like Portugal’s equally impressive second city, Porto, Lisbon is hilly and exploring its stepped alleyways involves a great deal of energy and curiosity (fortunately I have those in bucket loads!).  Or you can choose to jump on one of the centuries-old trams or funiculars that still trundle around the city. 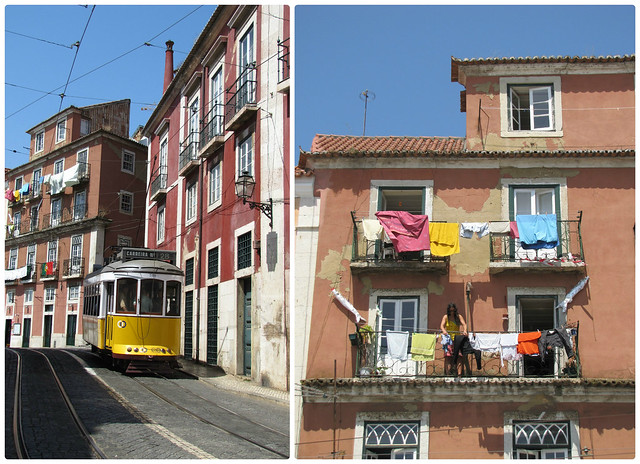 Due to the city’s elevation high above the Iberian peninsula, you’re never far from an incredible viewpoint.  Lisbon also boasts a civilisation that’s older than Rome, a café culture that dates back to the 18th century, and a wealth of historic attractions, monuments, and museums. 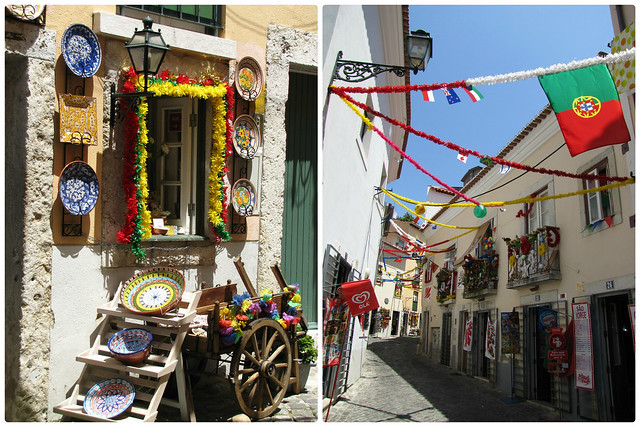 Couple all of that with a colourful vibe, lively nightlife  and some unique and tasty food and drink experiences, and you’ve got a pretty damn near perfect destination in which to spend a few days.

Here are my favourite parts of the city, in photos.

Alfama is the oldest neighbourhood in Lisbon.  Its maze of narrow streets lead uphill from the Tejo estuary towards the castle.  Take a self-guided walking tour to take in some of the city’s most historically important buildings, including the Se Cathedral, Castle, National Pantheon, and Saint Anthony’s Church.

Alternatively you can spend a totally worthwhile 40 minutes of your time riding the number 28 tram, which departs from Praça do Martim Moniz (north of Baixa) and terminates at the Campo de Ourique station, just past the magnificent Estrela Basilica. 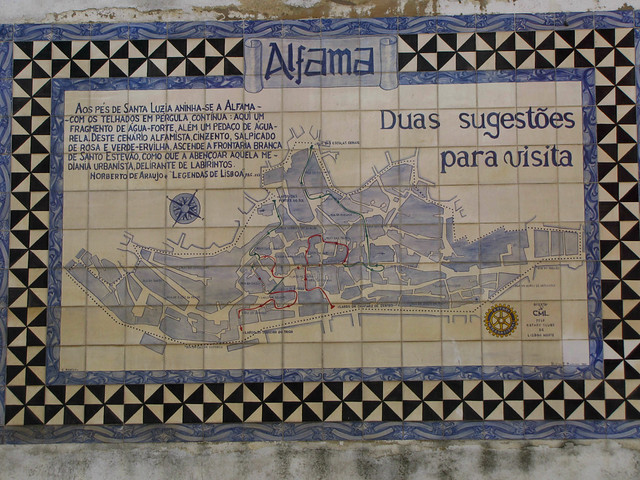 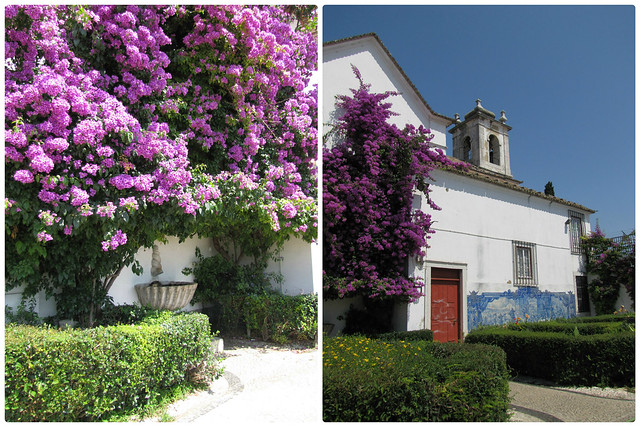 Perched above the enticing tangle of cobblestone streets in Alfama, on top of the highest hill in Lisbon, the fortifications of Castelo de São Jorge offer some spectacular views over the city. 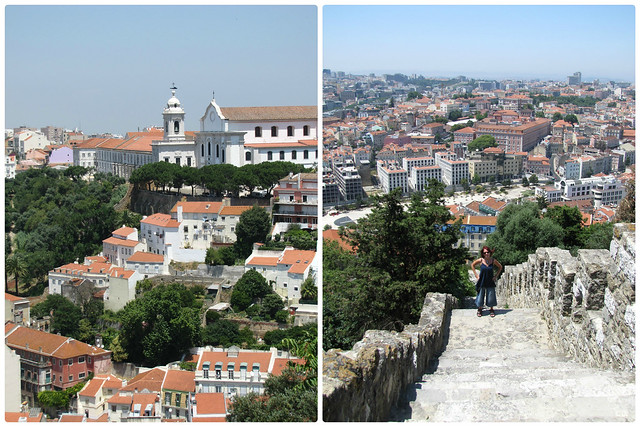 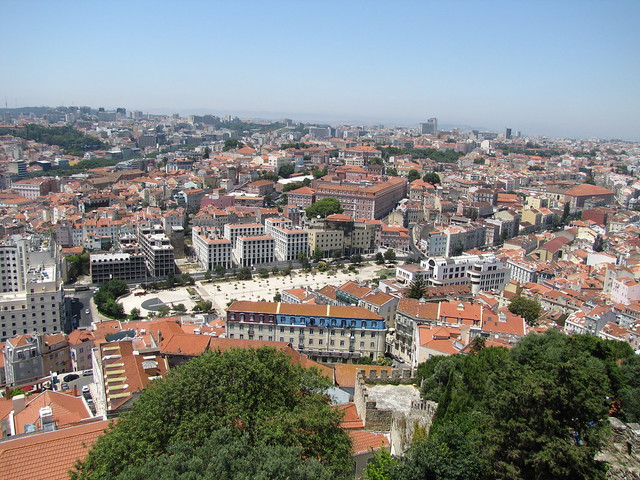 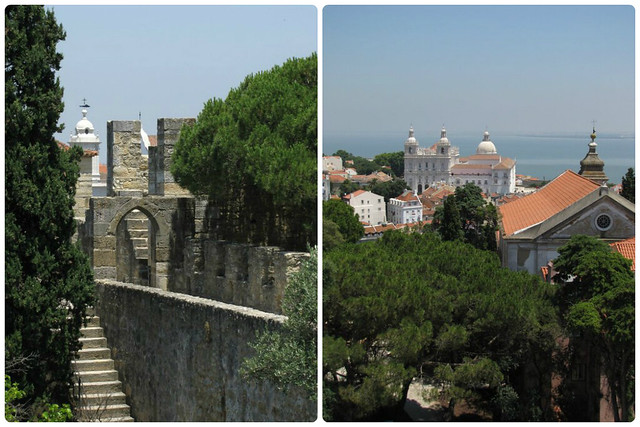 Constructed in the Moorish era, around the middle of the 11th century, the castle was the last stronghold in the defence against the Christian army.  After a seventeen-week-long siege, the army – led by Portugal’s first king, Afonso Henriques – finally recaptured the castle in 1147.

It subsequently became the main residence of the Portuguese monarchs, and has since served as a barracks, prison, and children’s home, before being renovated in the late 20th century, to become the tourist attraction it is today. 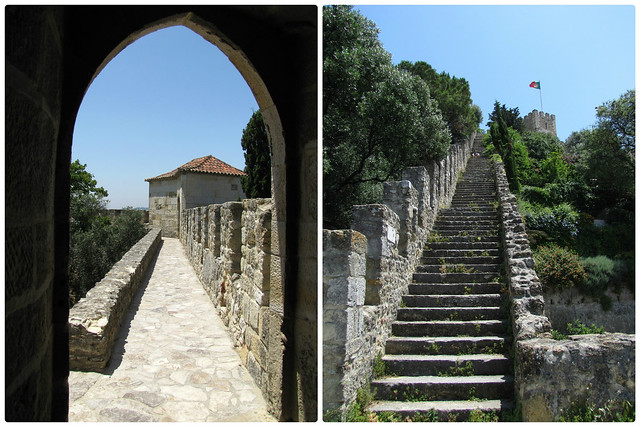 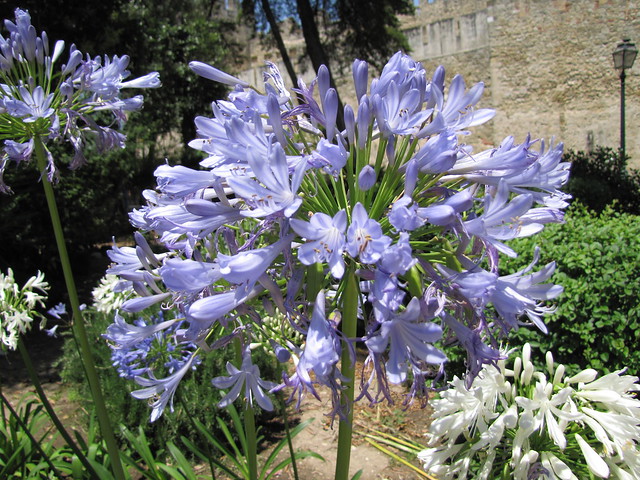 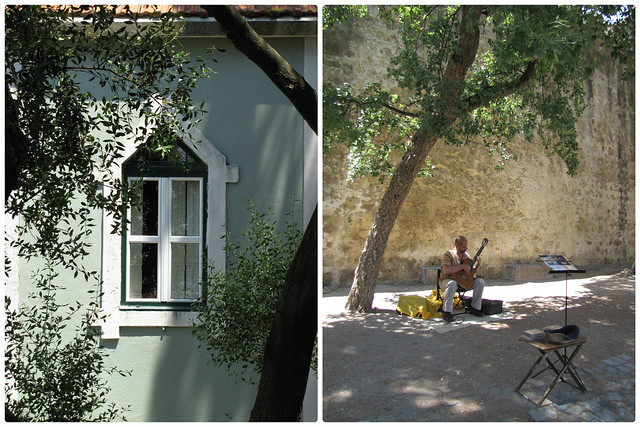 Situated on the northern banks of the River Tagus, Belém is a picturesque district to the west of Lisbon that’s rich in maritime history and boasts a wealth of great museums.

The three most notable sites here are the Torre de Belém, Mosteiro dos Jerónimos, and the Padrao dos Descobrimentos.

Torre de Belém is a UNESCO-listed fortified tower that was built in the 16th century with the purpose of guarding Lisbon from sea-bound attacks.  It has since been used as both a customs house and a lighthouse.  A raised wooden walkway provides access to the tower, in order to explore each of its five floors and its roof terrace.  But personally I think that the impressive Byzantine and Gothic structure is best viewed from the outside. 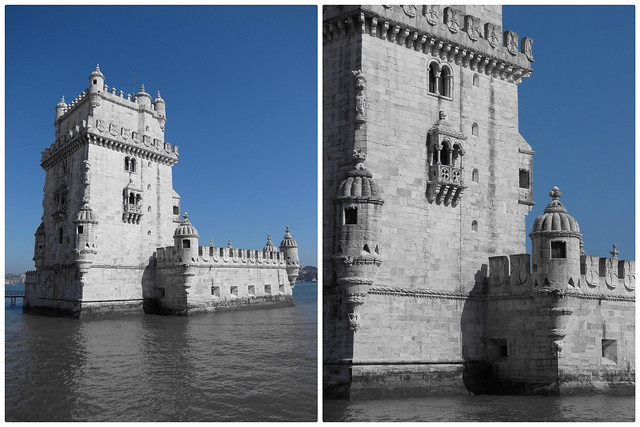 Equally impressive is the Mosteiro dos Jerónimos, a 15th-century Manueline monastery built to commemorate Portuguese explorer, Vasco da Gama’s “discovery” of India.  Some of Portugal’s greatest historical figures have been laid to rest here, such as Kings Manuel and Sebastião, and poets Fernando Pessoa and Alexandre Herculano. 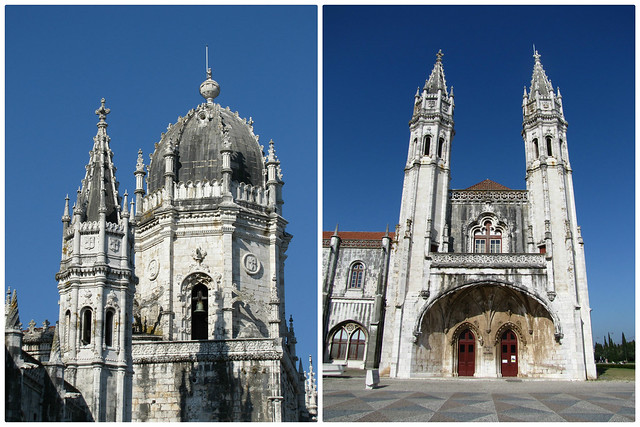 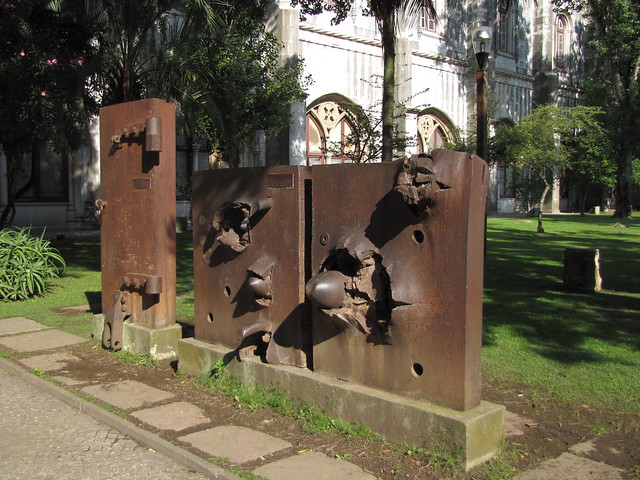 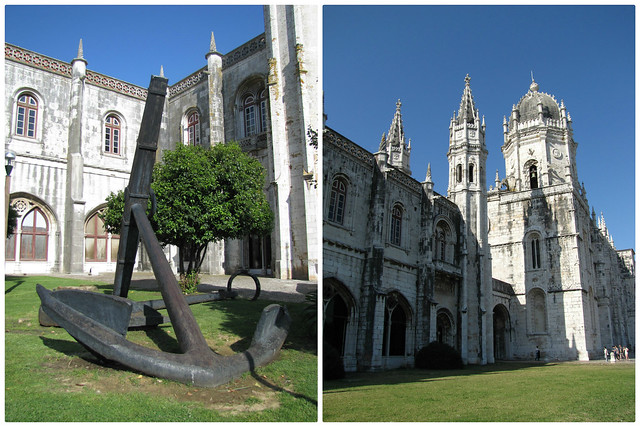 Last but certainly not least here is the Padrão dos Descobrimentos (Monument to the Discoveries).  Designed by architect Cottinelli Telmo and the sculptor Leopoldo de Almeida, the 52 meter-high monolith was inaugurated in 1960 to commemorate the 500th anniversary of the death of Henry the Navigator.

A model of Henry himself stands at the prow, along with other historical figures who took part in the development of the Portuguese Age of Discovery.

It’s possible to reach Belém by hopping on the number 15E tram, which departs from Praça do Comércio.  The journey takes 15 minutes and costs around €2.85.

Sintra is not actually in Lisbon but this picturesque Portuguese town, set amidst the pine covered hills of the Serra de Sintra, makes a fantastic day tip from the capital. 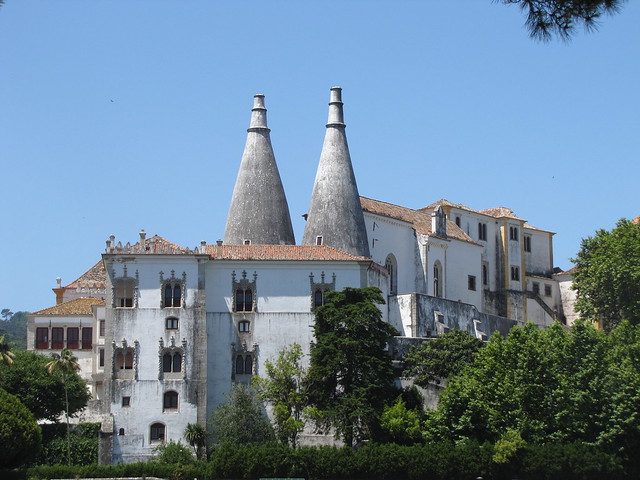 In the historic centre you’ll find pretty cobbled streets lined with traditional shops and cafes, and over 10 national monuments.  However the real draw for visitors to Sintra is its castle.

Castelo dos Mouros is perched high above Sintra and offers some spectacular views across the verdant Portuguese countryside. 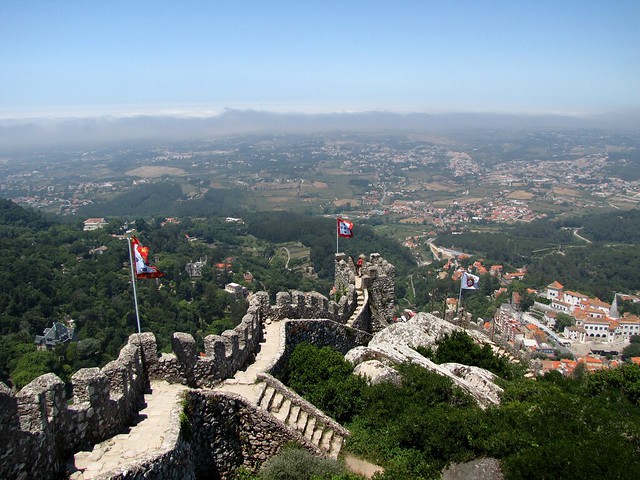 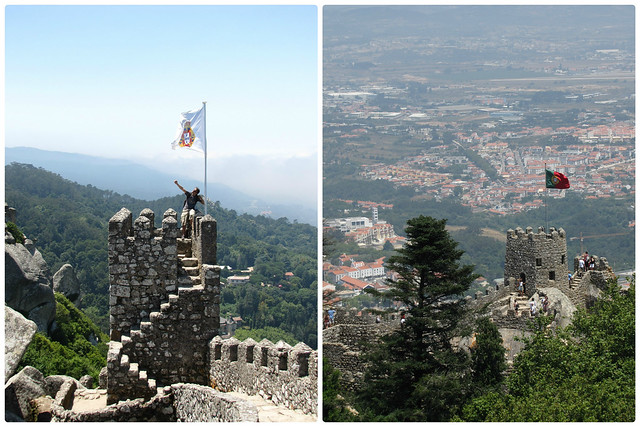 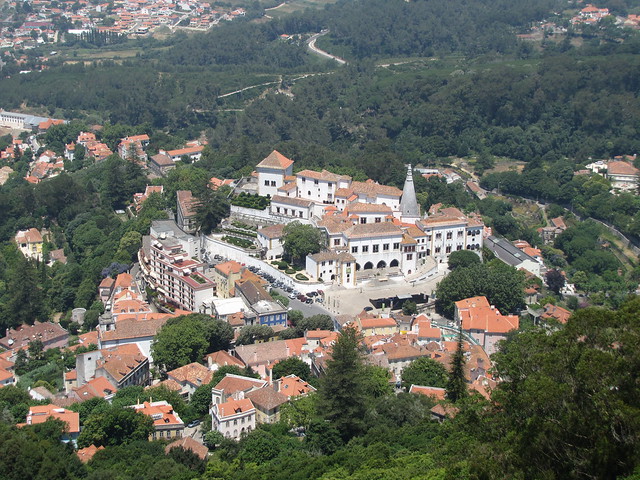 Eating and drinking in the Barrio Alto

Bairro Alto – meaning “upper town” – has a sleepy residential feel during the daytime, but at nighttime its maze of narrow streets come to life as some of the city’s best bars and restaurants open their doors.

There’s a relaxed, bohemian kinda vibe and the streets echo with chatter, laughter and live music.  Plus I was served two of the largest mojitos I’ve ever seen for just €6. So, of course, I had to pose for a photo.

Thanks to my work colleague Emily (who doesn’t go a day in the office without mentioning Lisbon) for inspiring me to finally write this post.  I hope to return someday soon and write a more detailed guide about this fantastic city.

Have you visited Lisbon? What should I see and do on my next visit? 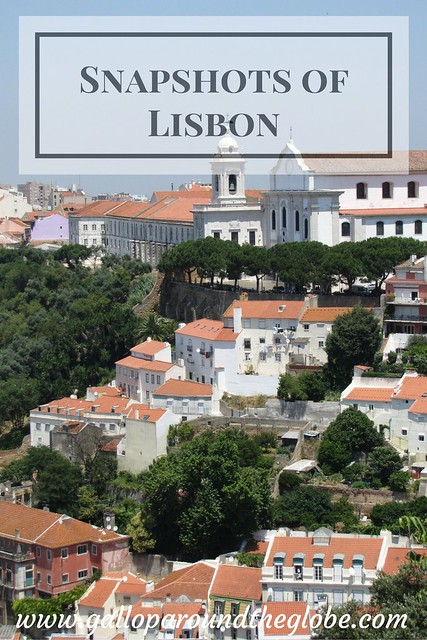 Things to Do in Matera: Italy’s ‘City of Caves’