A Perfect Wintery Weekend in Riga, Latvia – Gallop Around The Globe

Along with Tallinn and Helsinki, Riga was up there on my travel hit list as somewhere in the northern part of Eastern Europe / Scandinavia that I’d like to visit someday.

I didn’t anticipate for one second that I’d make it there quite as soon as I did.

Kath (my long-standing friend who lives up north in Newcastle), and I were planning a surprise birthday weekend away for our good friend Gloria.  We initially opted for a relaxing spa break in the northwest of England (Gloria lives in Preston, so somewhere like Manchester would have been a great central meeting point for all of us to travel to), but having trawled the numerous deals available on Groupon, Wowcher, and Travelzoo, we soon realised that we were either going to need more money than we’d budgeted for, or we were going to have our ‘weekend’ mid-week.

Inspired by her daily emails from Holiday Pirates, Kath then suggested that maybe we could take Gloria abroad.  We figured that if she’d arranged for her husband to look after their kids while we took her away for the weekend, it didn’t matter too much where that ‘away’ was.  We hoped.

Having run Barcelona and Budapest past me (I’ve visited both; one of them twice), Kath then asked,

“have you been to Riga?”

What’s more, we actually could have booked a triple room in a hostel in the old town, with breakfast included, for just £36 (yes that’s the total cost – not the price per person!) but we decided that if accommodation prices were so cheap in Riga then we could afford to splash out on something a little more luxurious.

Instead we chose an apartment right on the edge of Riga’s historic centre, which came with it’s very own hammam!

We were visiting the city during Latvia’s coldest month (February) so the hammam definitely sounded like a good idea.

Whilst we didn’t have anywhere near enough time to discover all that Riga has to offer, we did a pretty good job of combining sightseeing, exploring, and relaxing in our hammam, with sampling some delicious food, and getting the most out of the city’s buzzing (and downright bizarre in parts!) nightlife.

Here are a few of our highlights.

Opened in June 2014, Minka is located across the river in the Ãgenskalns neighbourhood, and is a cosy spot to while away a couple of hours.  If you can, bag a table on the upper level by the sofas, as this is where Cipis, the most playful of the three resident cats, likes to spend most of her time. 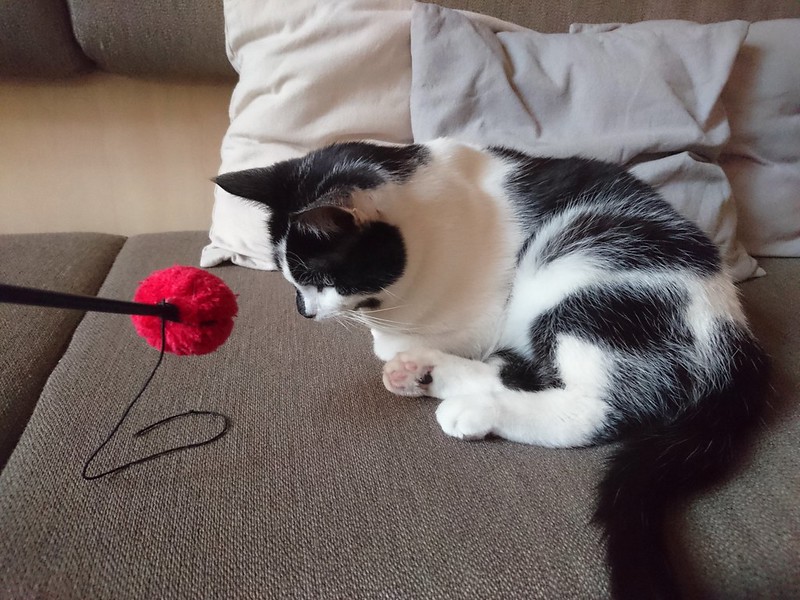 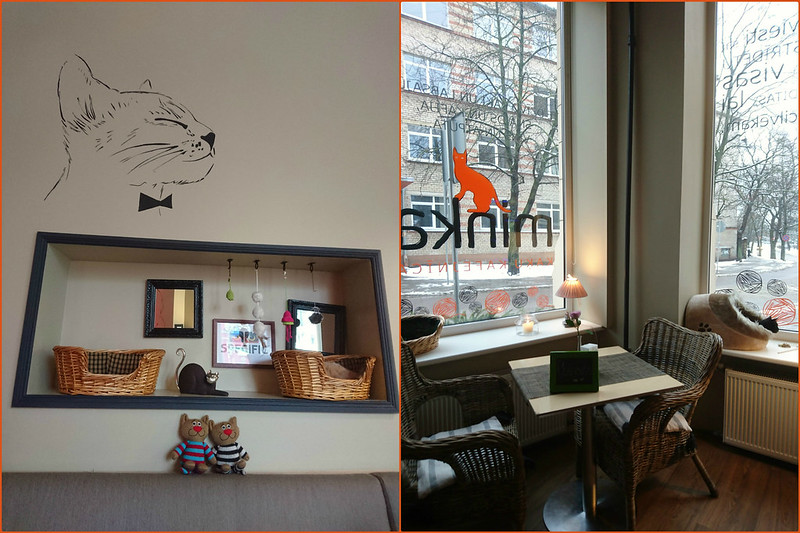 Incidentally the food is also great here, and they serve the local liqueur, Black Balsaam, if you’re brave enough to try a shot in your coffee! 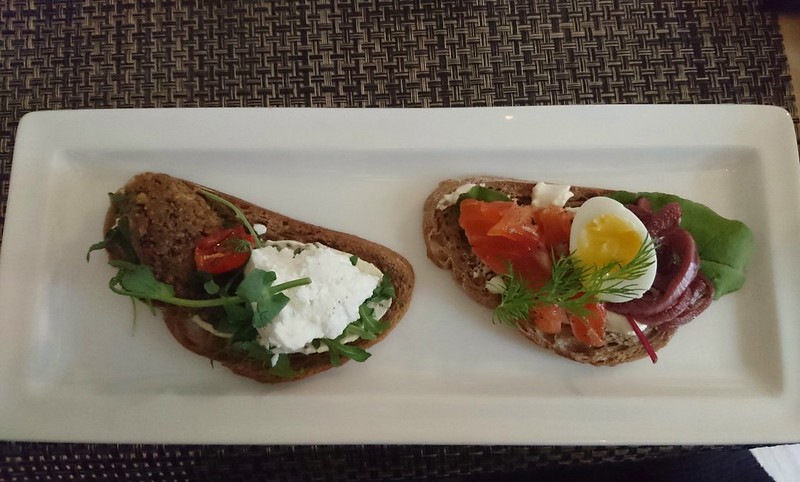 Latvia’s capital blends a long and colourful cultural heritage with one of the most beautiful traditional cityscapes in the Baltics.  Its Old Town – now a Unesco World Heritage Site – is a fairytale kingdom of gothic spires and winding, cobbled lanes flanked with pastel-coloured gingerbread-style houses. 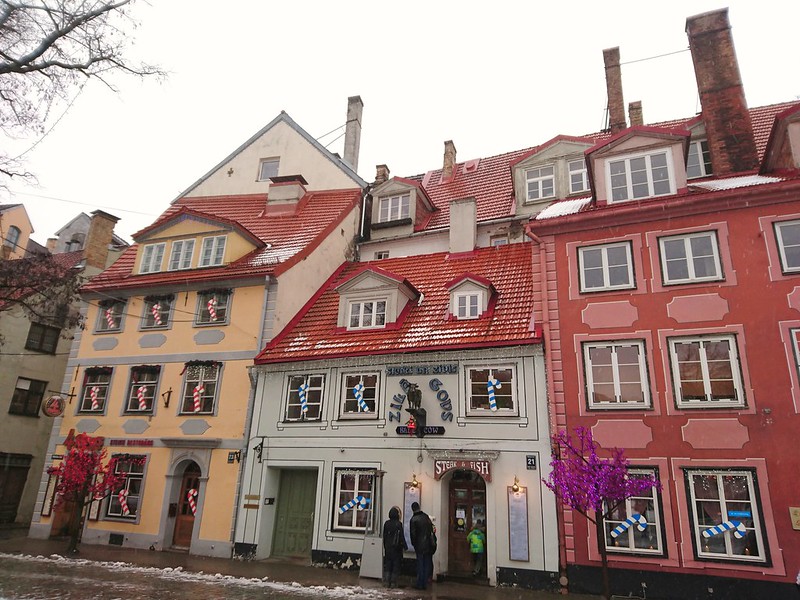 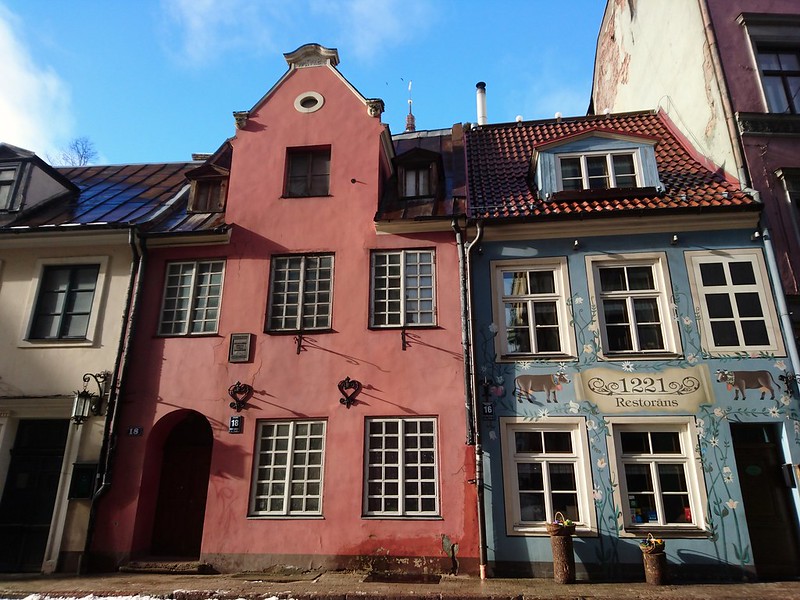 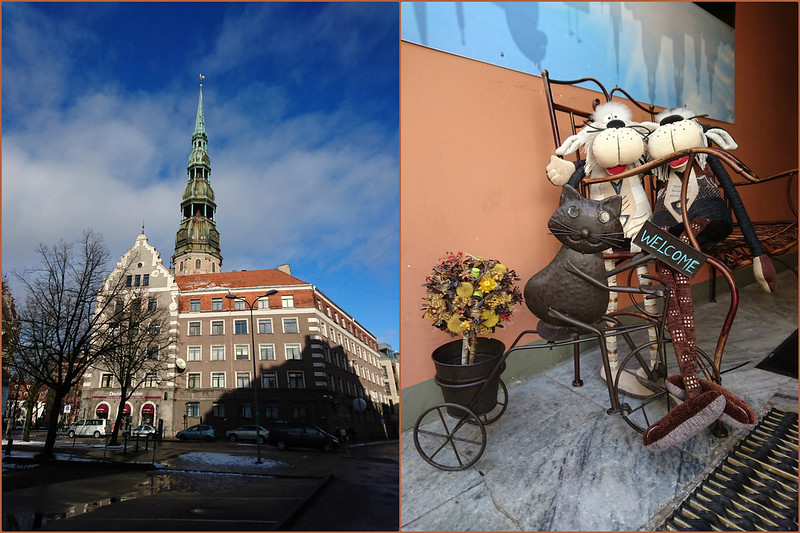 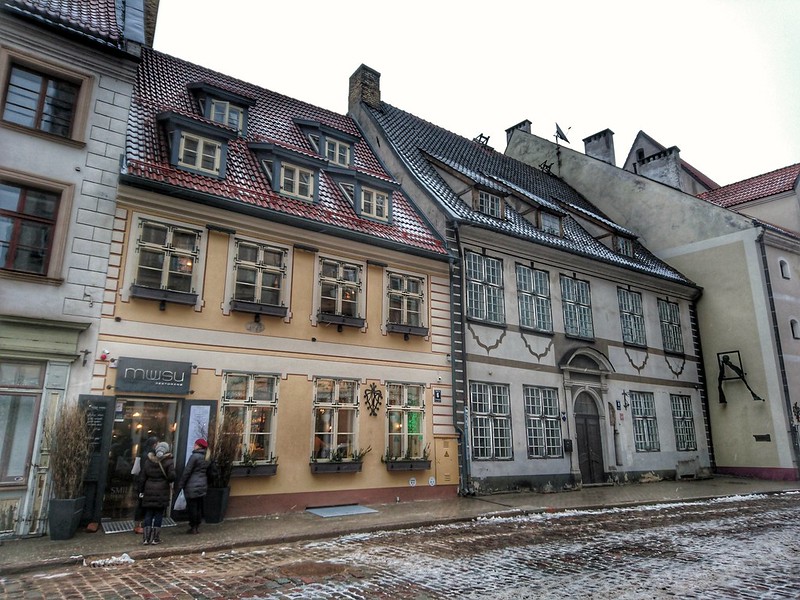 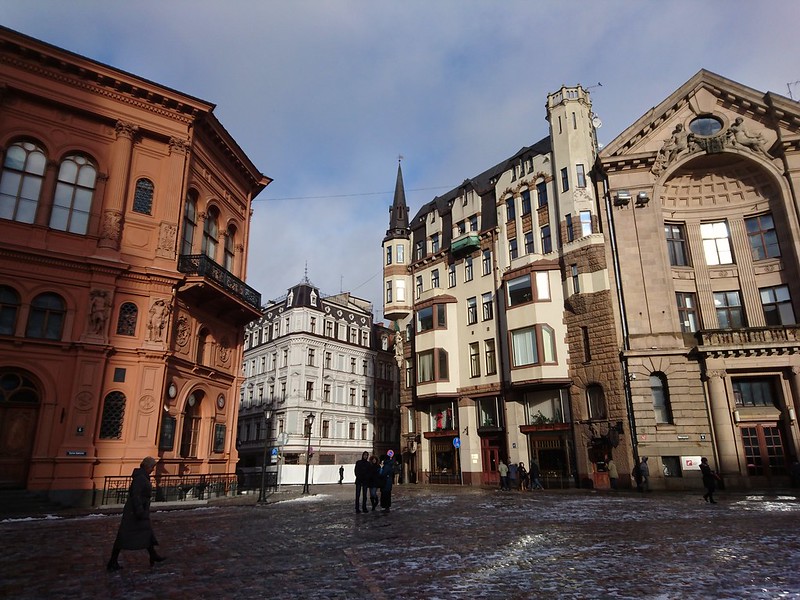 Our first morning in the city was simply spent wandering the streets of Riga’s historic centre, stopping for regular coffee breaks in its cute and cosy little cafes, browsing its boutique shops and gazing through frosted windows at its tempting displays of cakes and pastries. 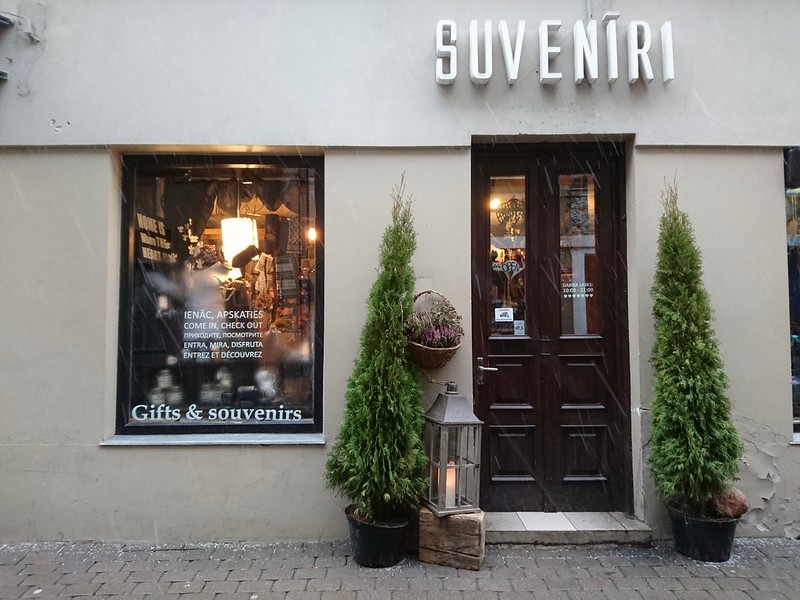 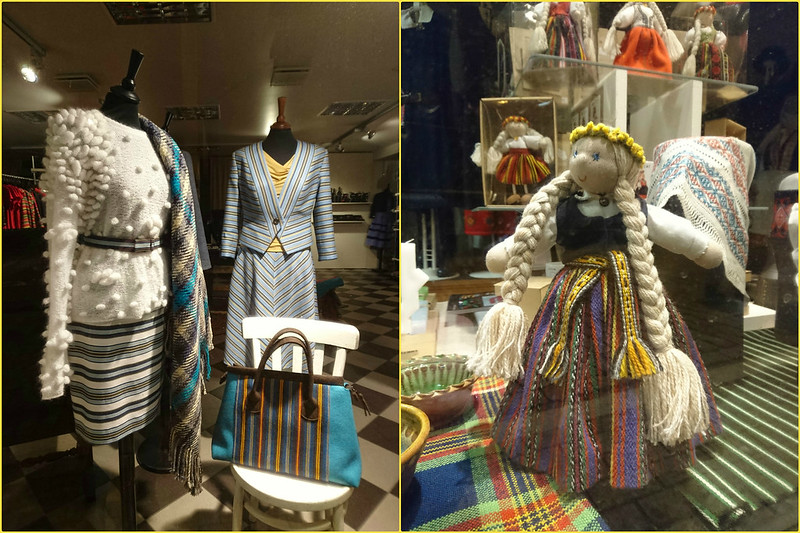 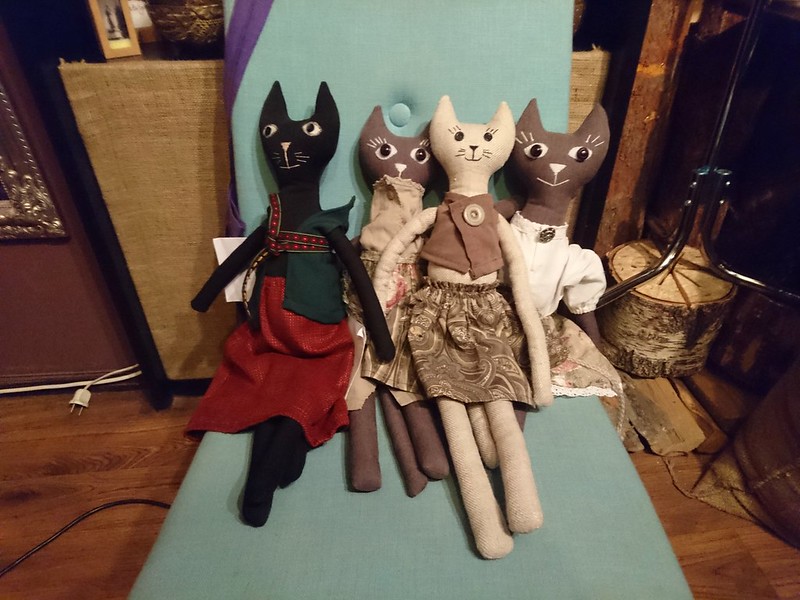 One of the interesting facts I discovered about the city before I visited was that it’s home to the largest concentration of art nouveau architecture in the world!  Riga boasts over 750 art nouveau buildings in total.

Approximately 40% of its Old Town buildings are in the art nouveau style (which is one of the factors that earned it its Unesco status), but if you really want to witness  Riga’s most beautiful examples of art nouveau architecture then take a walk to the ‘Quiet Centre’. 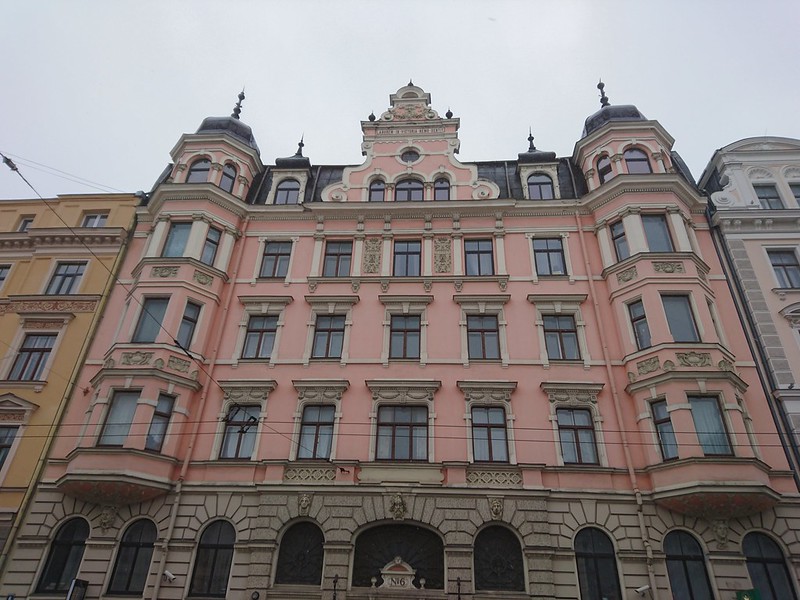 The Quiet Centre (also known as Riga’s Art Nouveau District) is located northwest of the city’s Old Town, and it’s along the streets of Alberta iela, Strēlnieku iela, and Elizabetes iela that you’ll want to primarily focus your attention.

Also don’t miss a visit to the Riga Art Nouveau Museum.  Once home to Constantins Peksens (a local architect responsible for over 250 of the city’s buildings), the museum has now been completely restored to resemble a middle-class apartment from the 1920’s.  The staff (including those on the cash desk who take your entry fee) all wear traditional costumes, which really helps to maintain a level of authenticity as you wander through the rooms of the apartment. 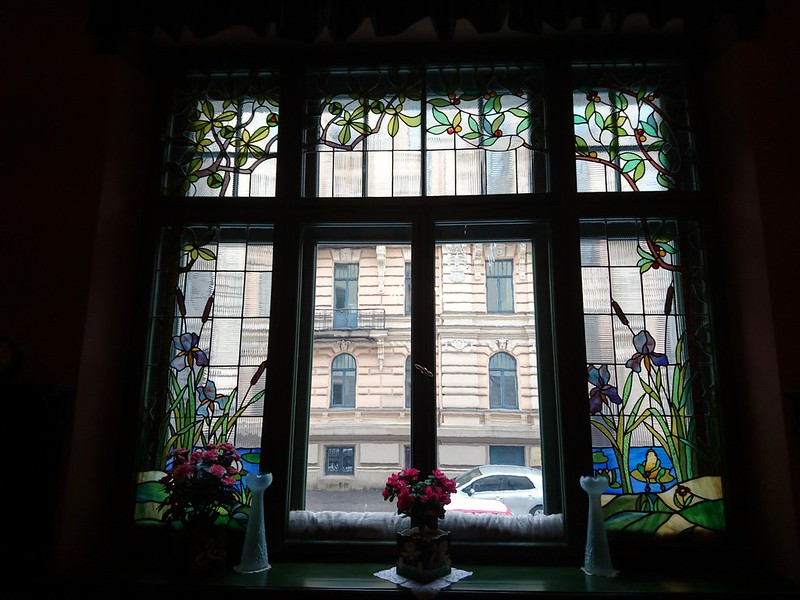 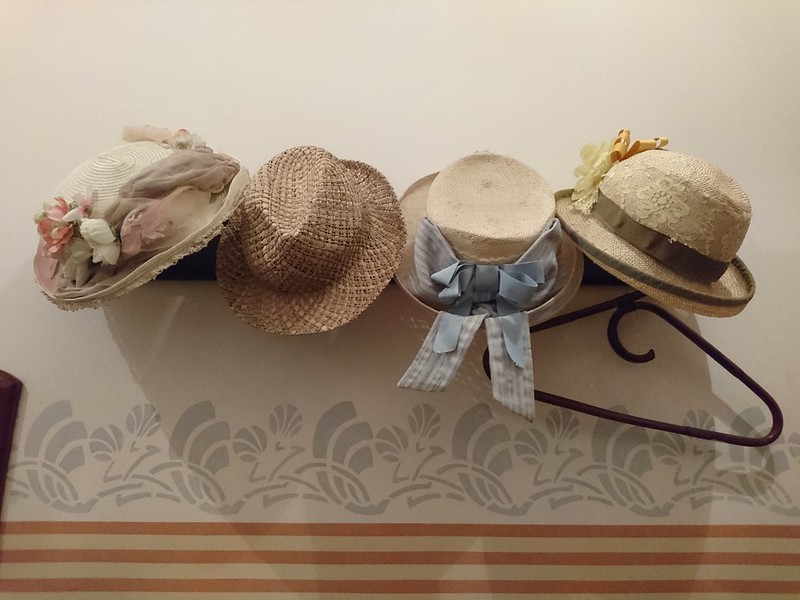 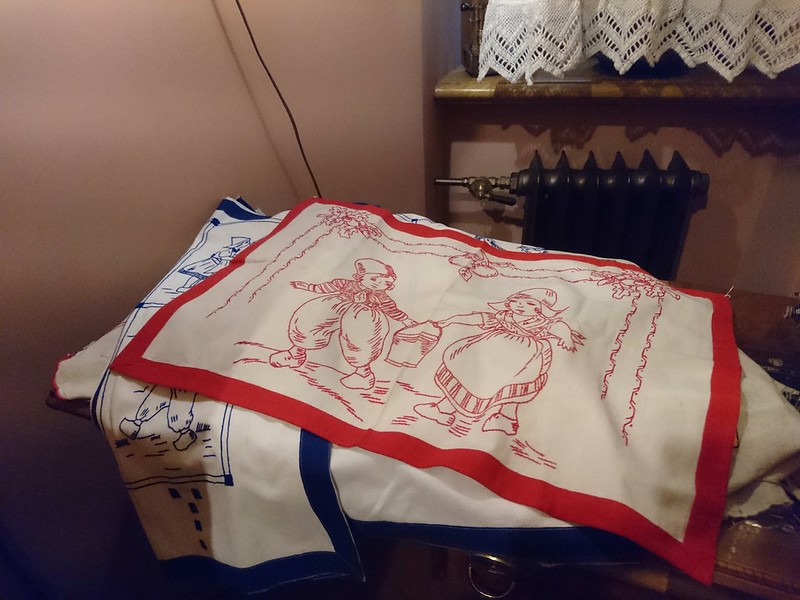 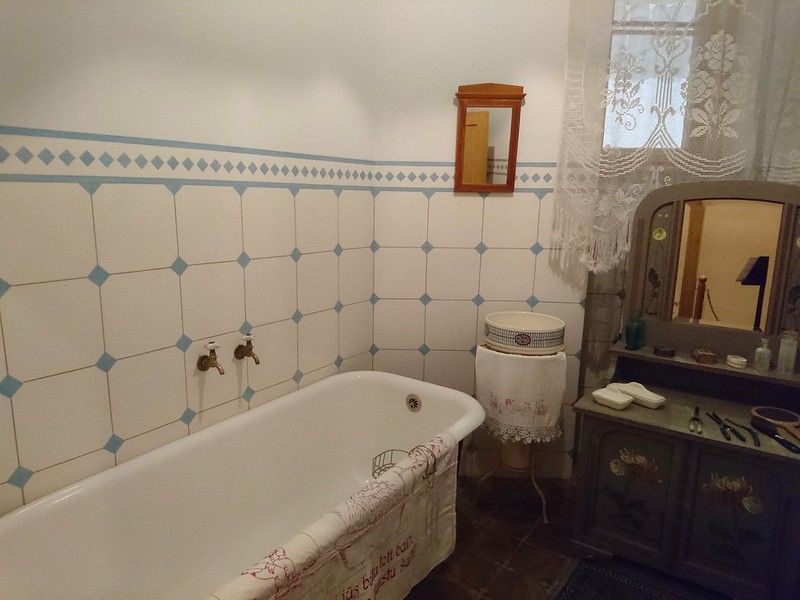 However the best thing about our visit (from someone who’s always loved fancy dress parties) was the fact that we were encouraged to dress up in period costume and pose for lots of silly photographs.  I particularly like this one of Gloria looking like a proper little Musketeer. 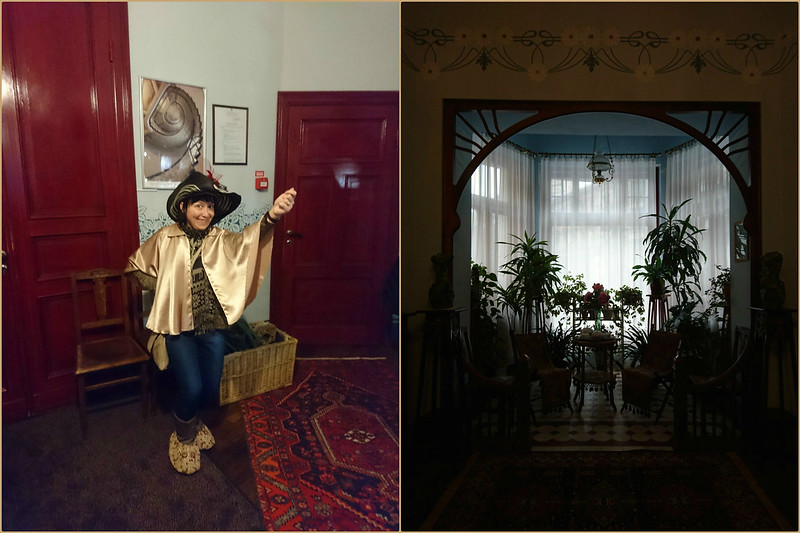 Outside the apartment you can climb the spiral staircase in the entrance hallway to admire some further examples of art nouveau decor, including some incredible wall and ceiling frescos.  Just don’t forget to look up before you do so. 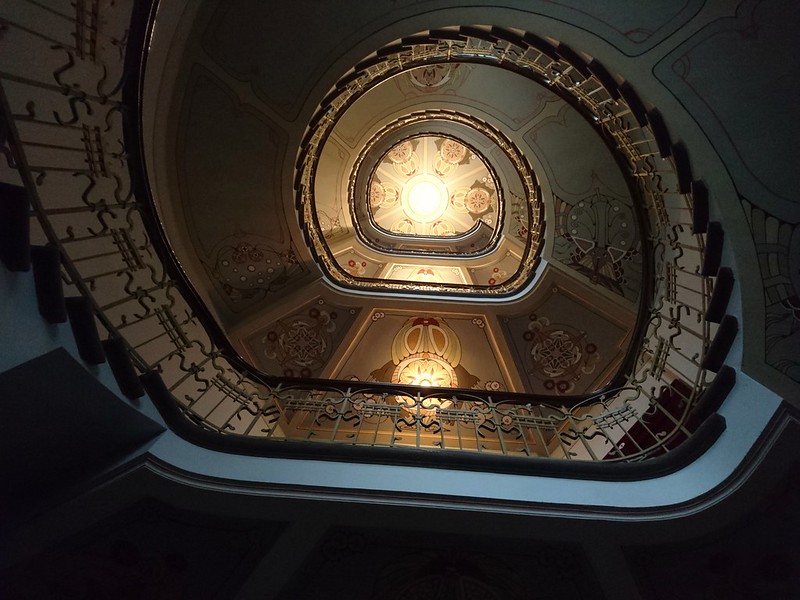 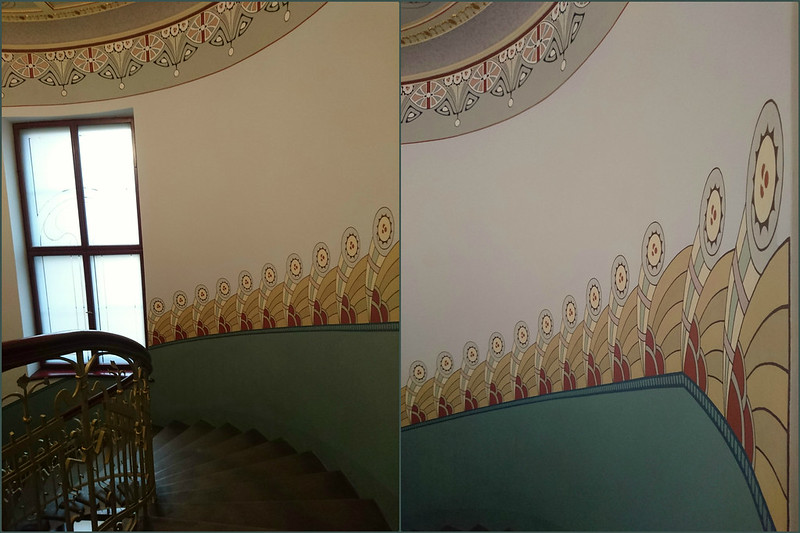 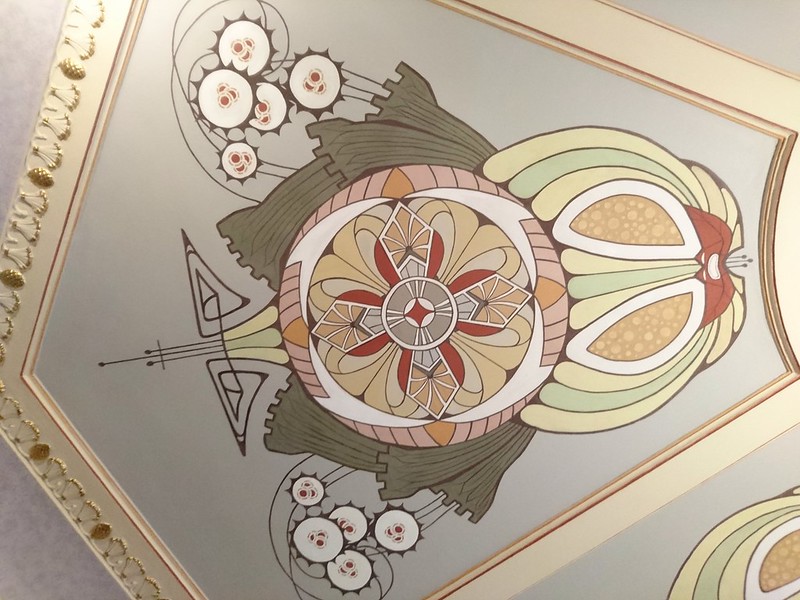 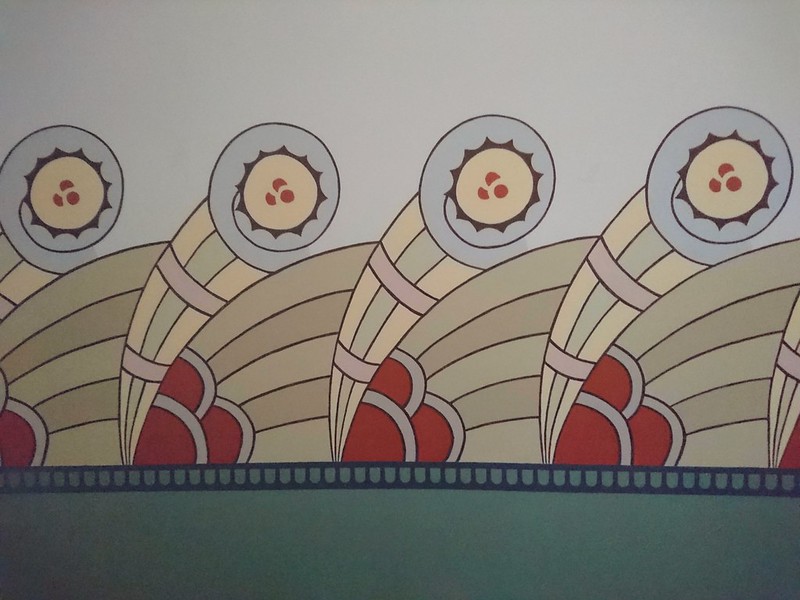 Latvian winters can be bitterly cold.  Temperatures rarely rise above zero with an average daily low of  -8 degrees.

With this in mind, it’s understandable that one of the country’s traditional handicrafts are knitted mittens, which – as well as protecting your hands from the harsh elements – have played an important part in Latvian courtship and marriage rituals for centuries.  Young girls would knit them for their suitors, and present them as a gift when the couple got engaged.

Latvian mittens are now widely available in souvenir shops and from market stalls throughout the city.  There are literally hundreds of colours and designs to choose from (yellow stickers indicate historically significant designs), and prices range from as little as €8 to €62.

I purchased mine for €28 from Hobbywool.  Thank you to Heather from Ferreting Out The Fun for the recommendation. 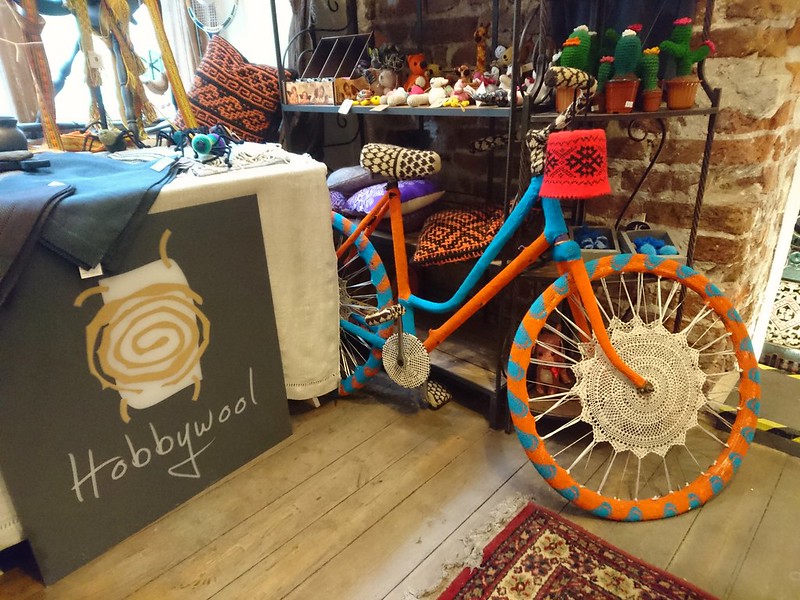 View from the Top of St. Peter’s Church Spire

Ok, so I have to admit that the weather wasn’t particularly cooperative on the day that we decided to visit St. Peter’s Church to climb its spire.  The wind was strong and bitterly cold (making our eyes water and freezing the tips of our fingers as we tried to take photographs), the skies were grey and there was A LOT of cloud cover, but the 360 degree views of old Riga were still incredible.

And just imagine this scene backed with blue skies and bathed in sunshine. 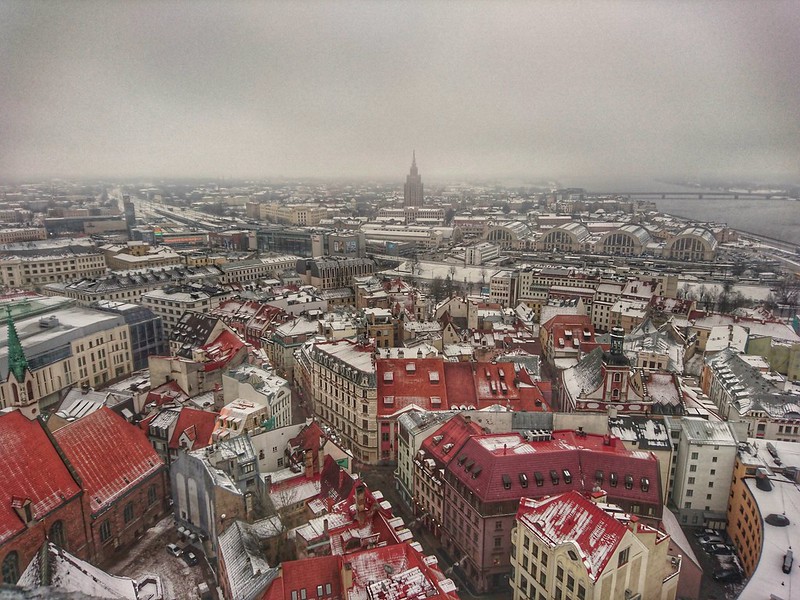 Have a peak inside the church itself before you leave, as there’s some beautiful stained glass windows, interesting sculptures, and temporary art exhibitions.

The quality of the food in Riga really surprised me.  Every single dish we ate was delicious and nothing like the Soviet stereotype.  Due to Riga’s proximity to the coast there was a lot of fish and seafood available, and a surprising number of vegetarian restaurants scattered across the city.

Here are a few of our favourites.

To be honest, it was the fact that this is a self-service wine bar that initially grabbed our attention, but after two visits we just totally fell in love with the whole Easy Wine package.  From the delicious food, the innovative concept, and the vast array of quality wines available, to the adorable staff, laid back ambience, and like-minded clientele. 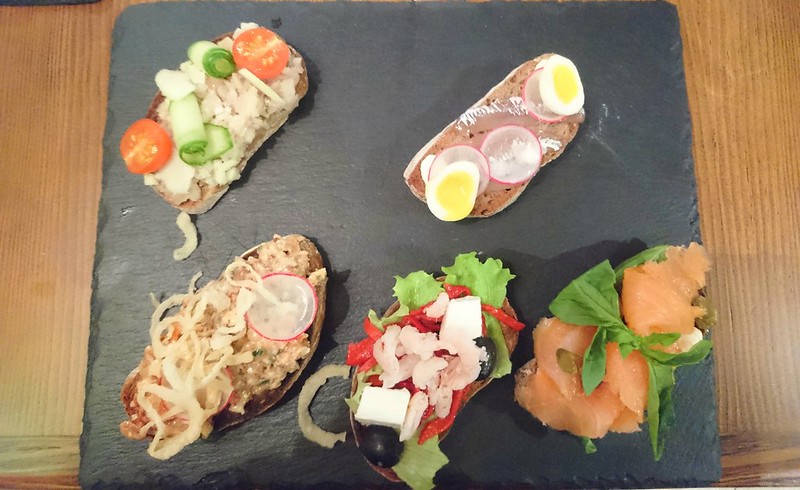 When we initially arrived on the Saturday evening, the staff regrettably informed us that they had no free tables, and we were about to walk away disappointed when an accommodating French lady, who was dining alone on the table beside the door, invited us to join her.  Shit like that never happens in England; we embraced it.

As our conversation progressed, we learned that she was an incredibly knowledgeable and well-travelled travel agent based in Switzerland.  We couldn’t have asked for a better dining companion.

If you want to be certain of a great night out in Old Town Riga, absolutely DO NOT miss Folkklubs.  This underground bar/restaurant/live music venue is a former wine cellar that dates back to the 13th century.  You’ll need to book a table if you want to eat here as it’s always busy – and with good reason.

The food here is a modern twist on traditional Latvian dishes, and is incredibly cheap (mains are available from under €5), there is a long list of delicious craft ales to sample (from hemp and ginger to honey-brewed), and you can enjoy live Folk music at least five nights a week.

Although they host artists from all over the world, the band we saw were Latvian, and played a wonderful mix of traditional Latvian folk songs and English/American tracks from the 60s through to the modern day.  I am a total and utter music nut, and vehemently believe that good music almost always turns a great night out into an incredible one.  Our night at Folkklubs was definitely one of the latter. 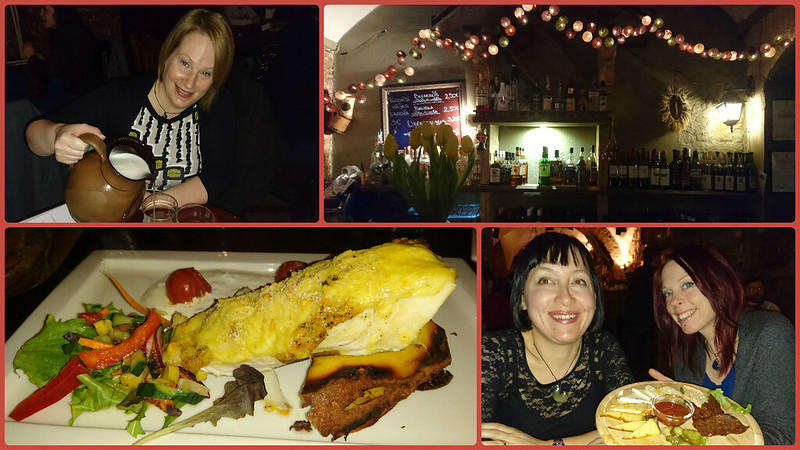 Fat Pumpkin is a cozy little vegetarian cafe that we discovered on our final day in Riga.  The food here was so good that even my meat-eating friend was gushing over her beluga lentil and coconut milk stew, and they’ve got a list of smoothies as long as the street the restaurant is located on!

The lovely lady who served us (who appeared to be running the joint on her own) even gave us some complimentary Latvian sweets to take away with us. 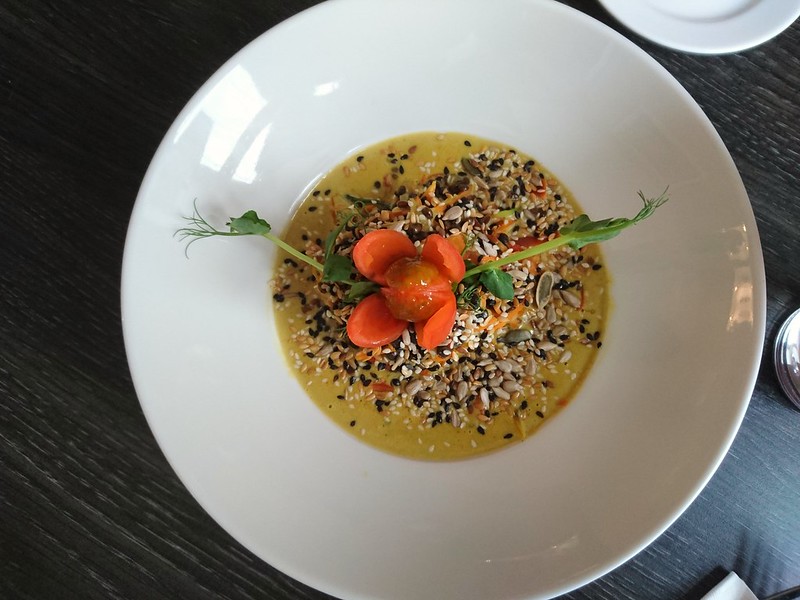 As we were leaving the Fat Pumpkin to make our way to the airport in order to catch our flight home, the sun came out for us.

It was almost as if the city was saying to us,

“you’ve seen me in winter, beneath snowfall, and covered in that magical dusting of fine white powder; this is what I look like in summer.  Have I tempted you enough to return?”

And, do you know what? I think it might have done. 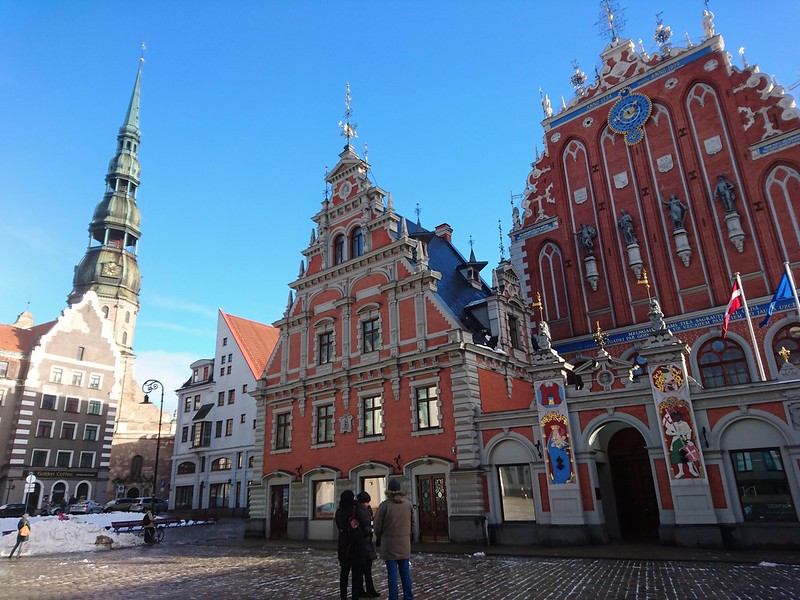 Have you visited Riga? What are your top tips for a weekend in the city? 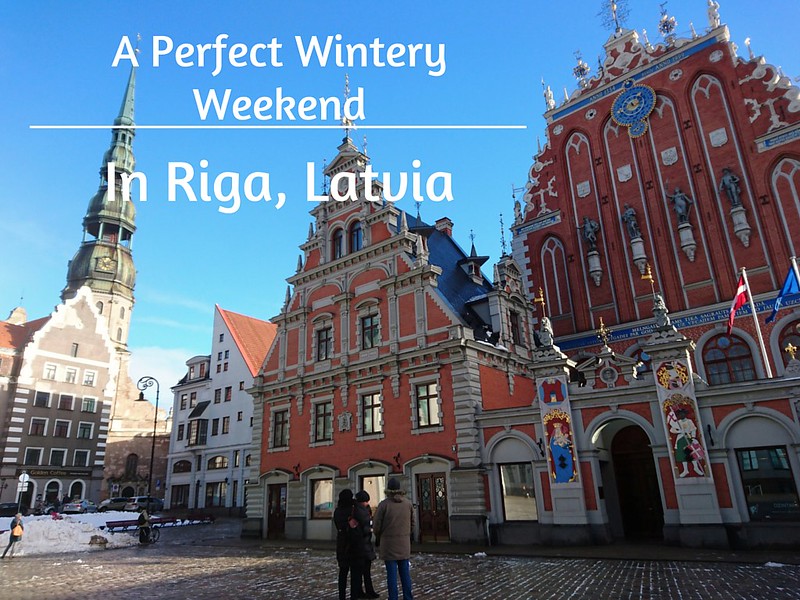 Visiting One of the Largest Castles in the Balkans in Gjirokaster, Albania

What to Do in Helsinki in One Day