If you fancy a fun and unique experience in Thailand, get yourself over to interactive 3D art gallery Art in Paradise, Chiang Mai.  You can even get yourself on the cover of National Geographic.

Flora Baker (better known as Flora the Explorer) actually made this dream a reality in 2015 by winning National Geographic’s annual travel writing competition with her wonderful piece describing a poignant meeting with a family in a small village in Thailand.

However, for the majority of us this dream of appearing in the National Geographic magazine remains an intangible aspiration.

Unless, of course, you pay a visit to interactive 3D art gallery, Art in Paradise, where – alongside relaxing in a gondola on the canals of Venice, surfing a giant wave, and flying over the streets of Paris on a paper aeroplane  – you can get yourself on the front cover of National Geographic.

Established by Korean, Jang Kyu Suk, with creative paintings by professional artists from Korea, and billed as the largest interactive art museum in the world, Chiang Mai’s Art in Paradise contains more than 130 works of art with which you can interact, in order to craft some fun and creative shots for your Instagram feed.

Despite spending time in Chiang Mai on multiple occasions in the past (several times in 2006 and a couple of times in 2011), visiting Art in Paradise was a new discovery for me in 2016, because the attraction only opened its doors as recently as 2013. 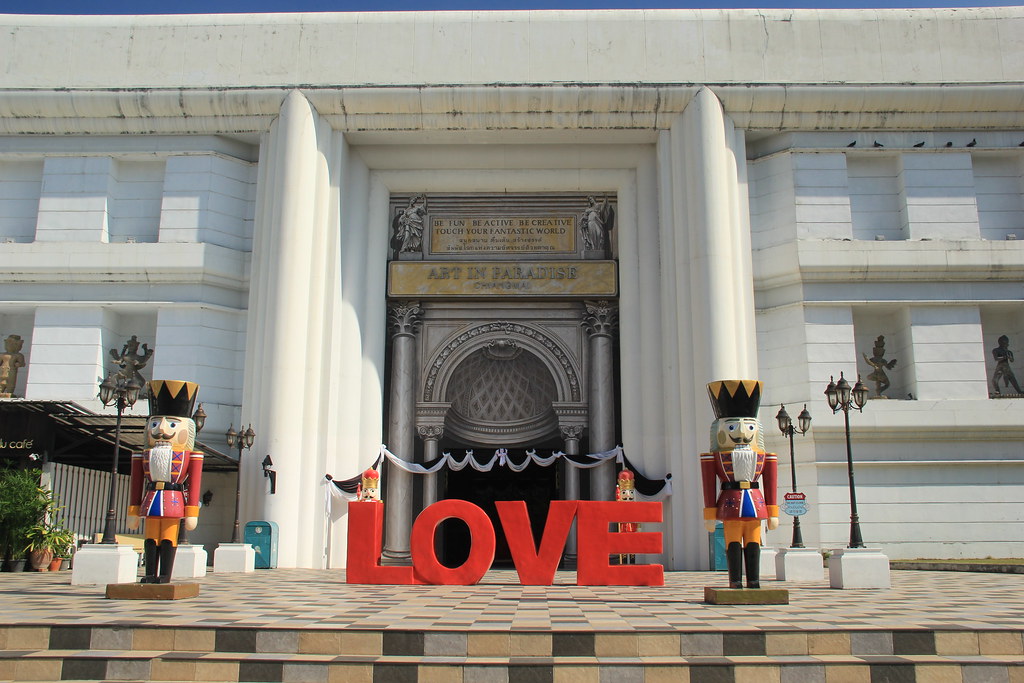 Obviously it’s the kind of experience that works much better and is a lot more fun the more people you can get involved (and unfortunately it would be difficult to fully enjoy if you’re travelling solo as it can be awkward and embarrassing directing strangers to take your shot), but I just went along with Stu and it was without a doubt the most entertaining afternoon we’d had in a long time.

What I hadn’t realised prior to visiting was how difficult it is to to pose in such a way that you really look like part of the painting.  I’d get my feet or hands in the wrong place, I’d stand at the wrong angle or facing the wrong direction, or my stance would look staged and unnatural.  There were easily ten times as many hilarious out-takes as there were shots that made it into this post.

As you can probably gather, we literally took hundreds of shots between us, but here are a few of my favourites – including the famous National Geographic cover shot.

An Afternoon at Art in Paradise, Chiang Mai

Due to the lighting inside and the fact that it’s not very practical to set your tripod up for every shot, you’ll probably find that your mobile phone is your best bet for taking photographs at Art in Paradise.  I used a combination of phone and DSLR, although I must admit that a lot of the time the phone photos came out better.

Although we were in Chiang Mai in the middle of the high (normally dry) season, we never had to wait very long to take our shots.  I think that because the gallery is so huge, people move on fairly quickly in order to ensure they have the time to make it around all the exhibits.  And people were generally pretty patient and considerate of other visitors, which helped to make our experience all the more positive.

This was by far and away the easiest photograph to pose for, because all I had to do is sit on the floor and look anxiously up in the direction of my escape route. 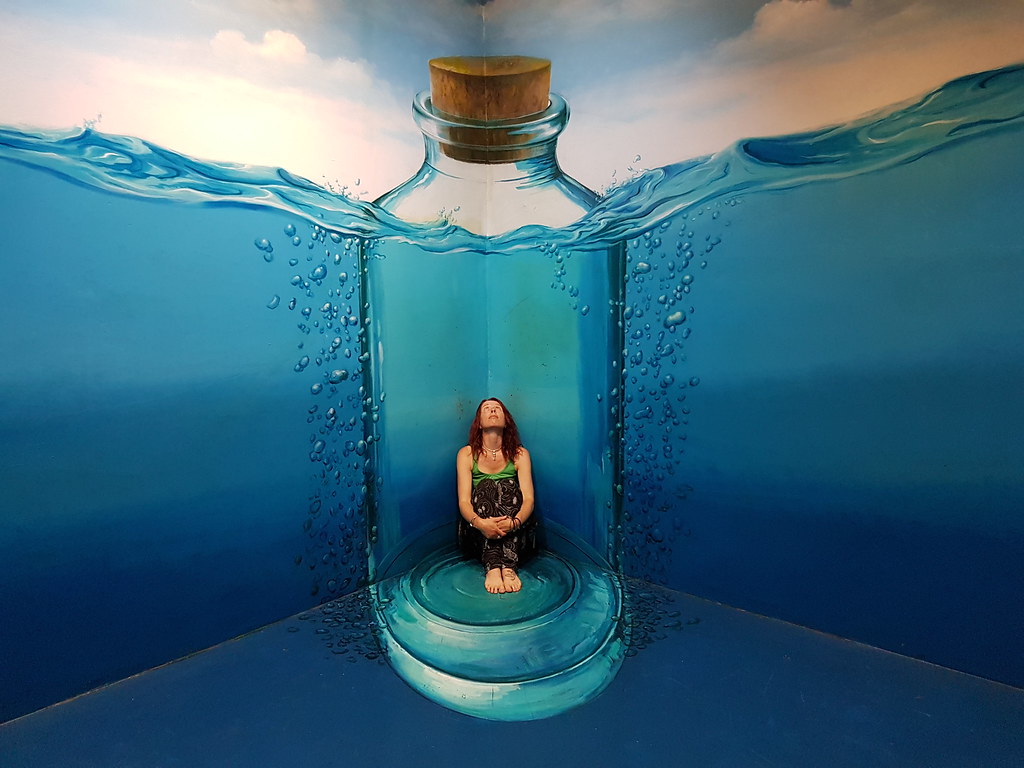 This one was a little harder and ultimately (as with many of the photos in this post), Stu got the pose to appear a little more natural than I did. 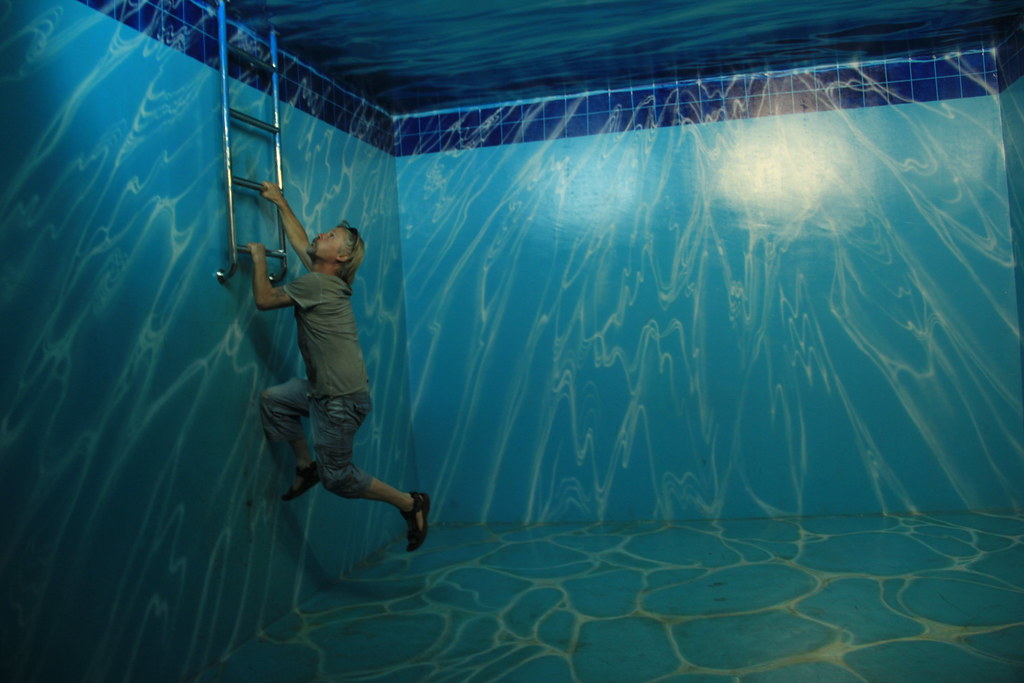 As he did with this one also.  Having never tried surfing before in my life, I looked a little more like I was dancing to ‘Staying Alive’ on a surfboard. 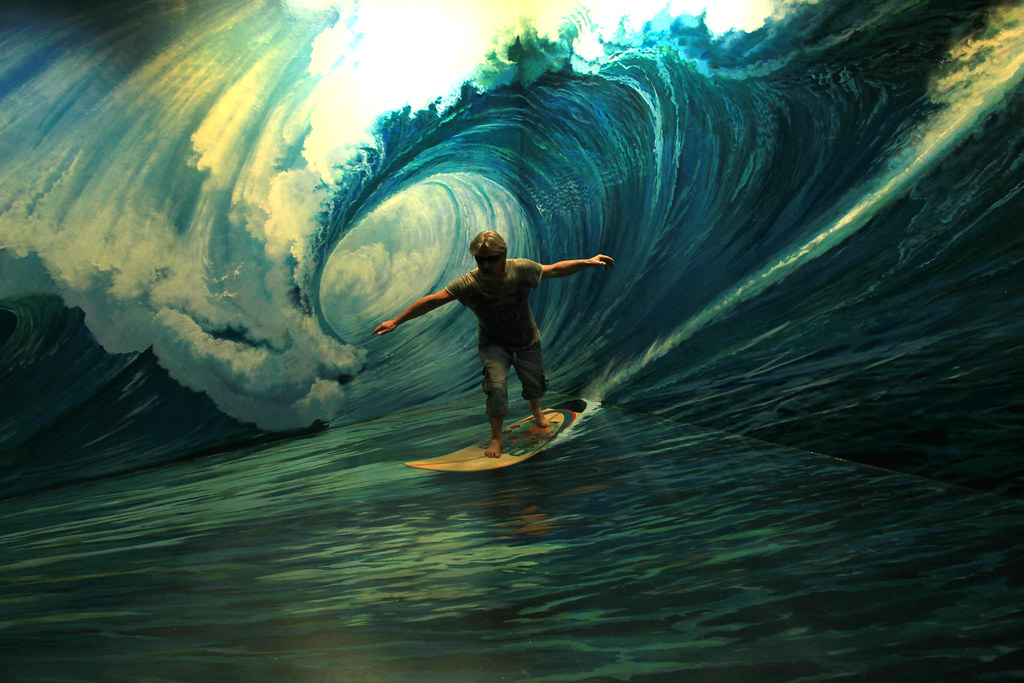 Although he didn’t always come out on top; spot the epic fail in this shot.  Yep, those are his sunglasses lying on the table next to his severed head! 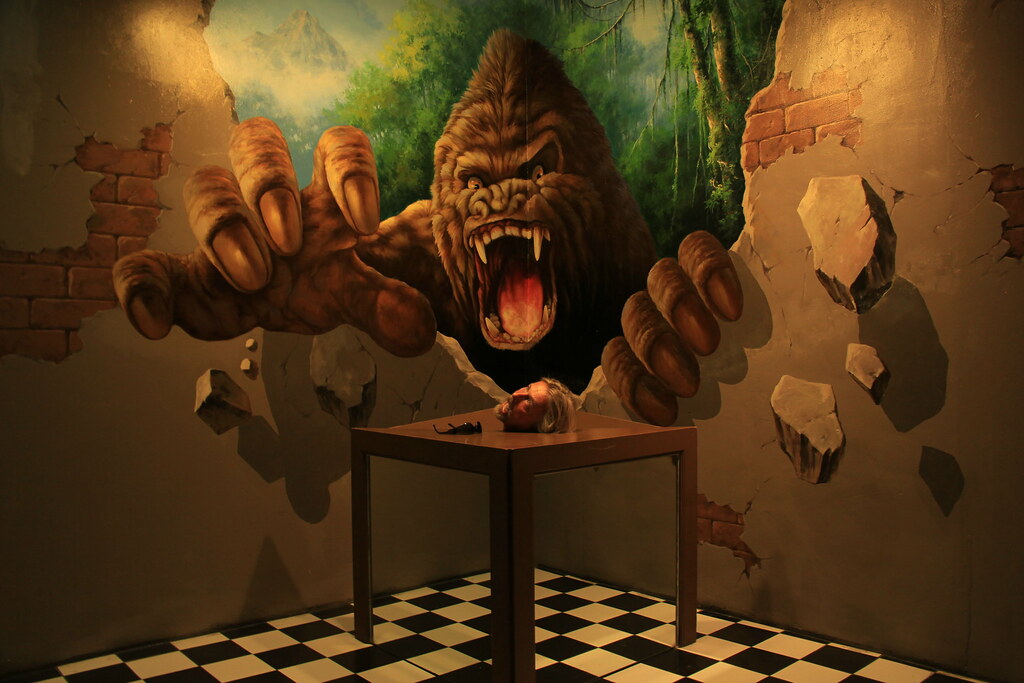 If you’re wondering how that illusion is executed, those are mirrors that you can see on two sides of that box that looks like a table.  Clever, huh?

I also loved the fact that Art in Paradise is split into sections.  For example, as you enter you’ll walk through the ocean and underwater section, and then you’ll move on to the jungle, rain forests and sub-saharan Africa. After that, you’ll find yourself in Mediterranean Europe and then there’s a section dedicated to central and southeast Asia.  It almost felt like I was part of some kind of cool round the world adventure.

In Africa I got to kiss an elephant on the end of its trunk (well, almost – Stu should have instructed me to move a little closer!) and Stu looked for bugs beneath the grasses of the Savanna. 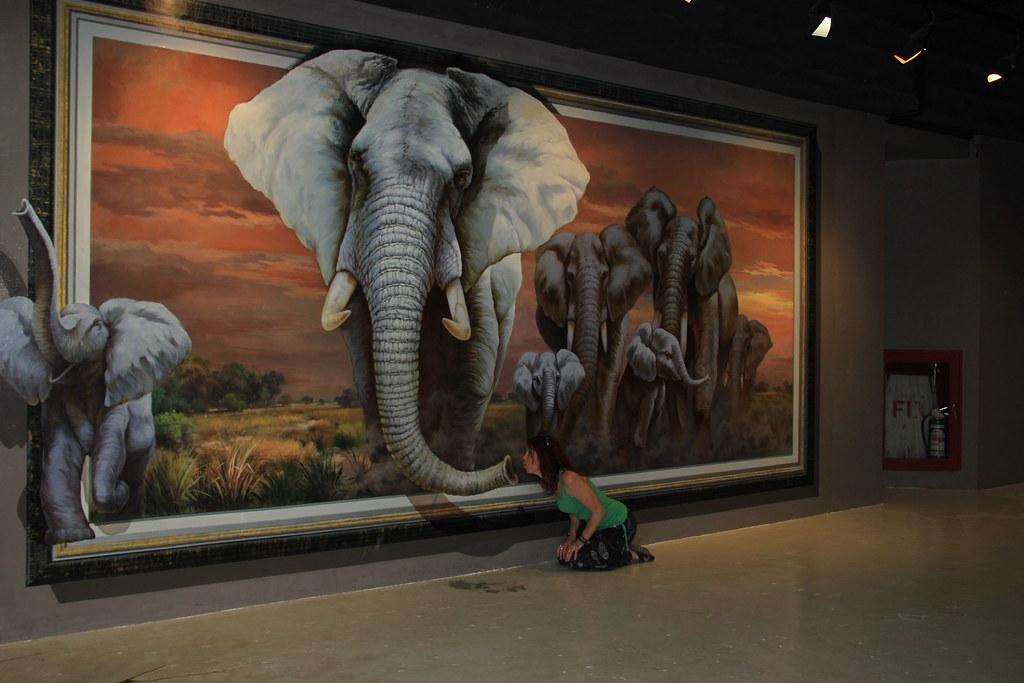 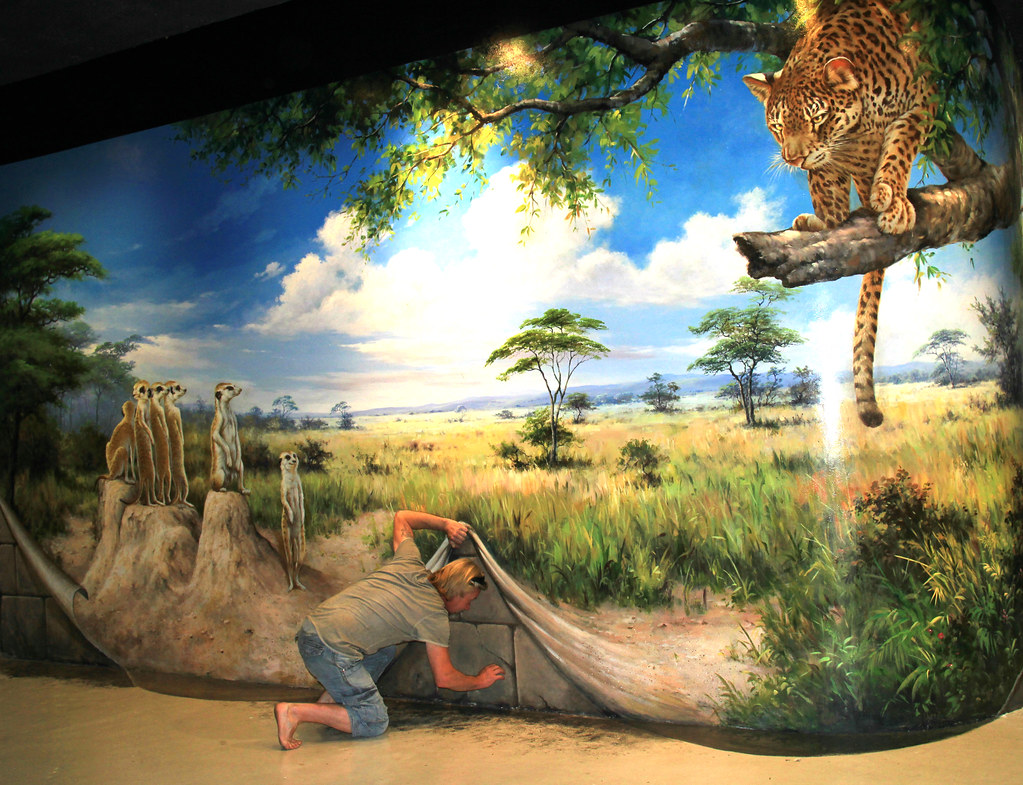 In Venice, Italy, Stu relaxed on board his very own gondola, floating along the city’s picturesque canals. I also tried the same pose but my arm wasn’t quite long enough, so it looked like I was about to fall out of the gondola! 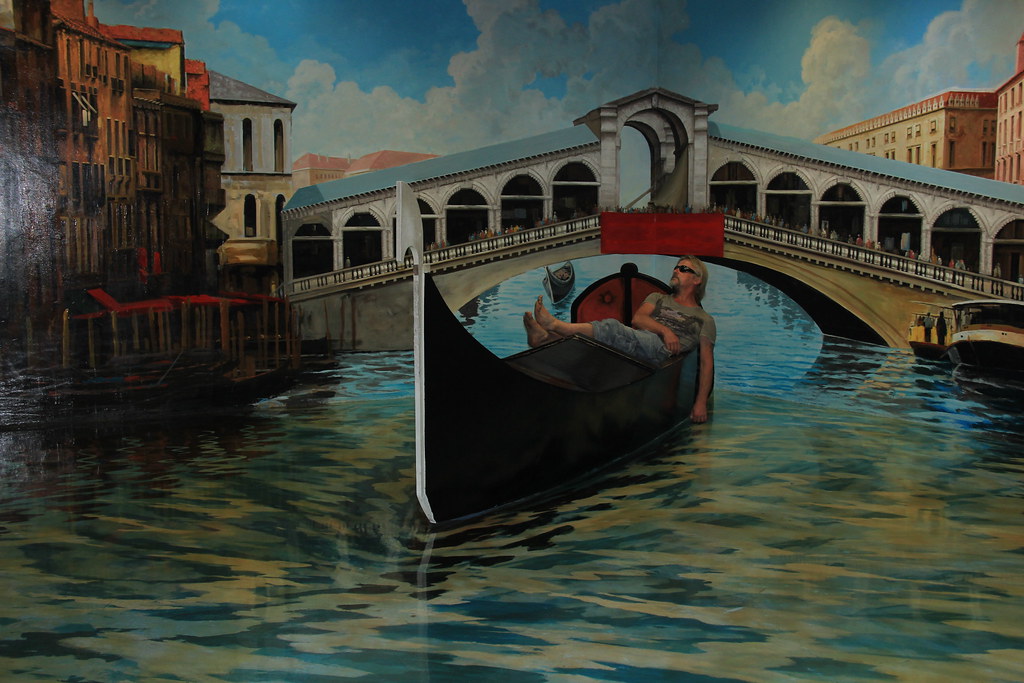 In the evening he nipped over to Paris on a paper aeroplane.  At least I think this is Paris.  I can see the Eiffel Tower, but that also looks like Big Ben in the foreground, so who knows? 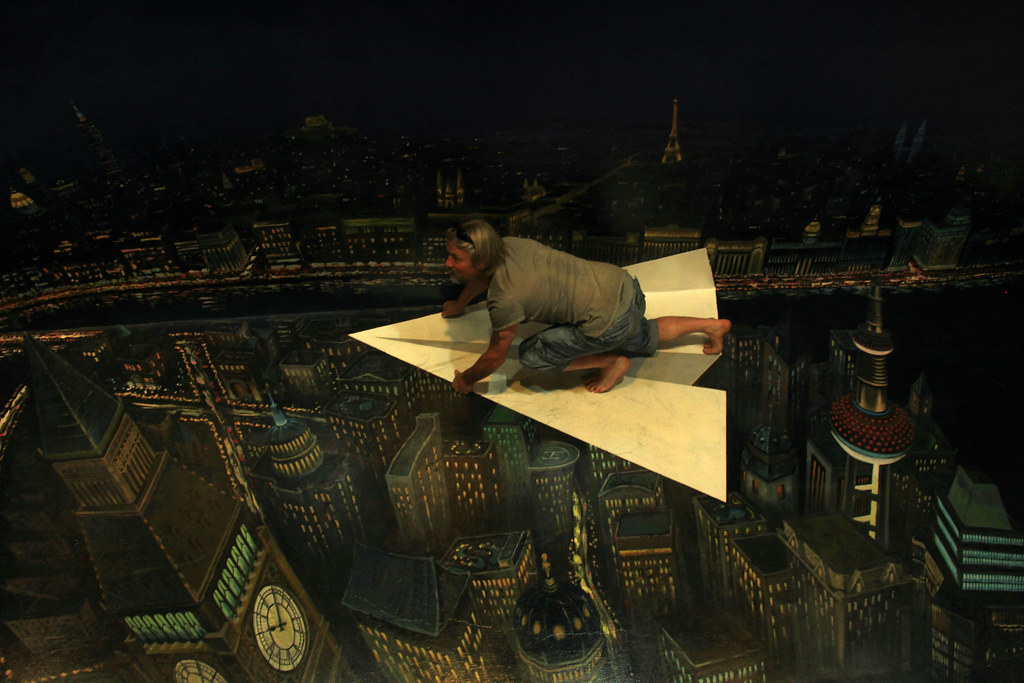 Amidst the opportunities to ‘travel’ to various destinations, you’ll also get the opportunity to hop back in time – to an Elizabethan card game, perhaps? 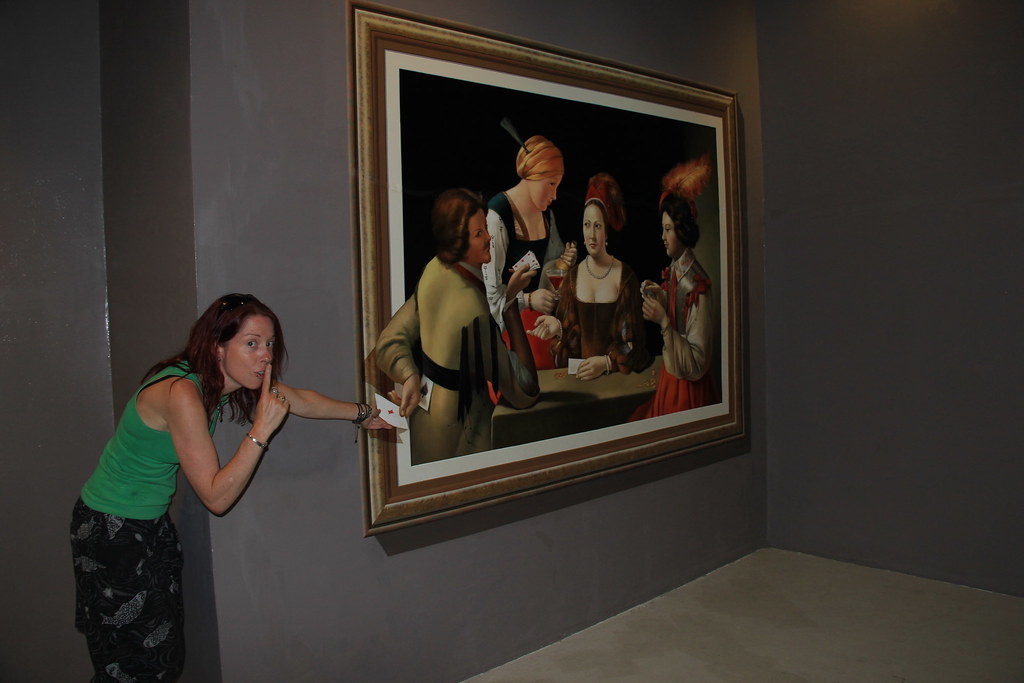 Or maybe you fancy trying your hand at being a fire-breathing circus performer? 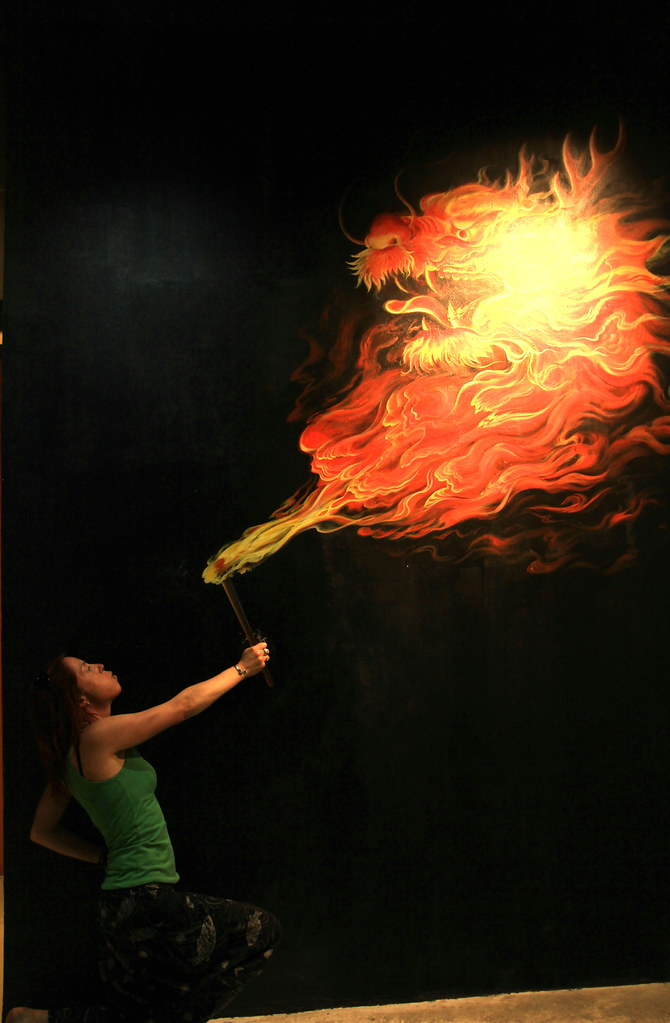 And then, of course, there is the one and only time I’ll find myself on the cover of National Geographic 😉 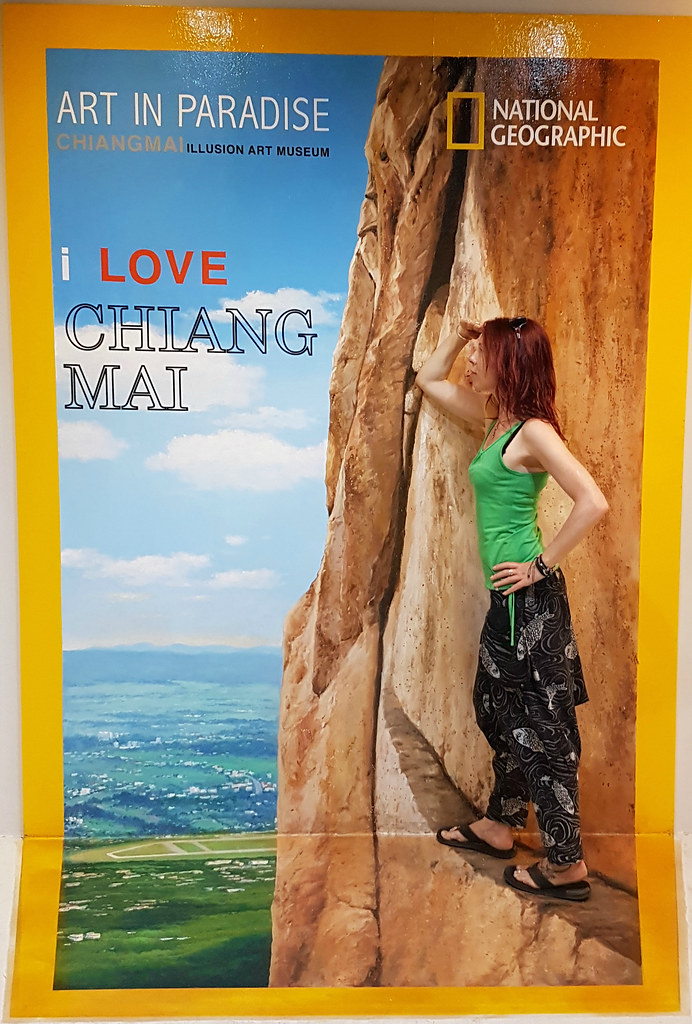 Where is Art in Paradise located?

The quickest way to get there would be to flag down a tuk-tuk or motorcycle taxi, but the cheapest is to do as we did and walk the route (see below).

You can make it a relaxing amble by stopping for breakfast or lunch along the way; there are plenty of cafes to choose from.

If you’d like to purchase an Art in Paradise ticket in advance, you can do so via Get Your guide below. And while you’re at it, how’s about a bike tour of the Old City and an authentic Thai cookery class and market tour?

Where to stay in Chiang Mai

We stayed at the wonderful Green Sleep Hostel, which currently has a 9.3/10 rating on booking.com (correct April 2019). It’s located just off Rachadamnoen Road in the Old City, 900 metres (or a 10 minute walk) west of Tha Phae Gate.

When we visited in December 2016, the hostel had only just opened its doors to guests, so even now, less than three years later, it’s still a fairly new addition to Chiang Mai’s boutique hostel scene. There are dorms and private rooms available, all with spotlessly clean shared bathrooms, and a complimentary breakfast is included in the room rate.

If you’d prefer to have more of your own space then Airbnb have some lovely apartments in the city.  You can get £15 off your first stay with Airbnb here.

Alternatively, if you’d like to search all available accommodation in Chiang Mai, you can do so below.

Of Rivers and Railways: Exploring Kanchanaburi’s Torturous Past

What to Do in Helsinki in One Day