A Perfect Summery Weekend in Liverpool

If you’re looking to spend a weekend in Liverpool, here are a few sights and activities (and restaurants and bars!) that you may want to add to your itinerary.

Despite making a promise to myself last November that Canterbury was going to be the first of many weekends I’d spend exploring a bit more of my beloved home country, aside from visiting friends in Newcastle, London, and (close to) Hay-on-Wye, I hadn’t really travelled anywhere else in England since then..

So when I spotted a cheap (by British standards) hotel deal at the Tune Hotel in central Liverpool, I jumped at the chance of returning to the city that boasts the largest collection of museums and galleries outside of London.  Liverpool is compact, walkable, and home to some stunning pieces of art and architecture, as well as a huge selection of international restaurants and quirky cafes.

Stu and I set off from Shrewsbury on Friday morning, and returned on Sunday afternoon, giving us the equivalent of two full days to explore the city.

We seriously lucked out with the weather while we were there, which kind of made us reluctant to spend too much time inside buildings when there was so much sunshine to enjoy outside.  So we didn’t visit as many museums and galleries as we would otherwise like to have done, but here’s what we did manage to see and do on our weekend in Liverpool.

Initially opened in 1846 and operated as a working dock until its closure in 1972, Liverpool’s Albert Dock later underwent a huge restoration programme and was re-opened as a visitor attraction in 1988 by Prince Charles. 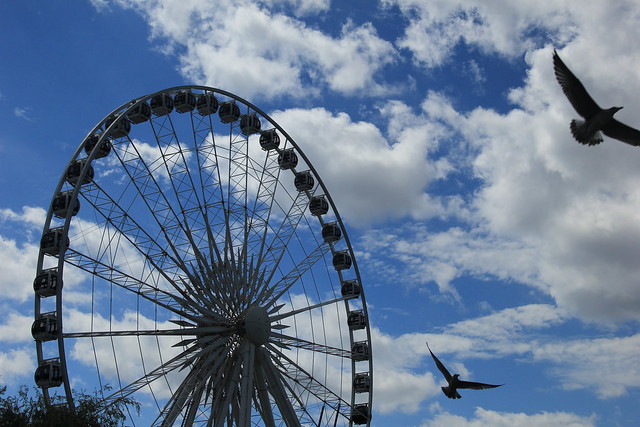 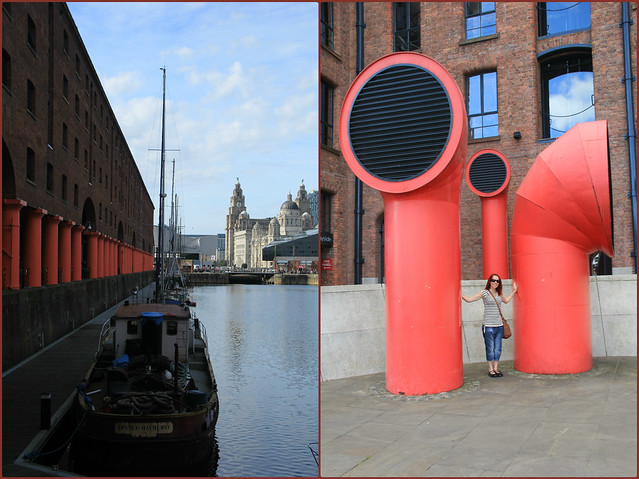 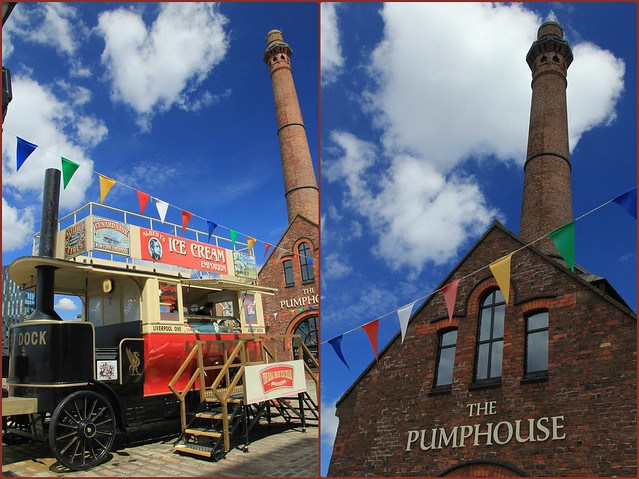 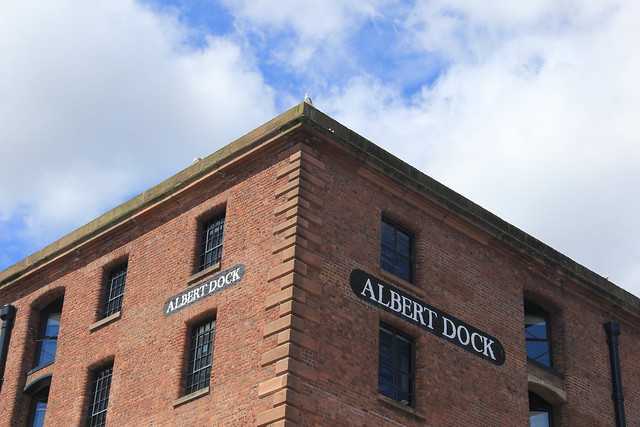 It is now a UNESCO World Heritage Site which houses the largest collection of Grade I listed buildings in the United Kingdom.  Award-winning visitor attractions such as the Beatles Story, International Slavery Museum, Merseyside Maritime Museum and Tate Liverpool are all located here, along with an overwhelming choice of restaurants, cafes, and shops.

There are also cute little vintage ice-cream trucks and donut vans to feed your sugar addiction.  Personally I don’t have much of a sweet tooth so I was much happier photographing them. 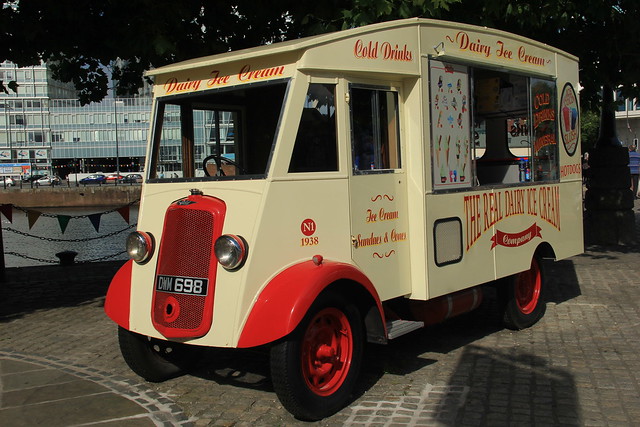 Most of Liverpool’s museums are completely free of charge to enter, which is great because I didn’t actually think I’d be very interested in the Maritime Museum (so therefore I wouldn’t have paid to enter), but I ended up spending hours there! 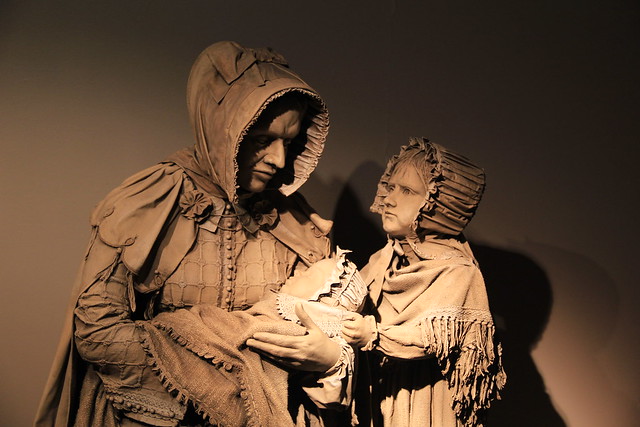 There’s a lot more to this museum that shipbuilding and engineering displays; there’s a whole upper floor dedicated to the African slave trade, a reconstruction of life below deck, the untold story of the Titanic, a peak into customs, smuggling and contraband, and interactive demonstrations by the fun and knowledgeable museum staff. 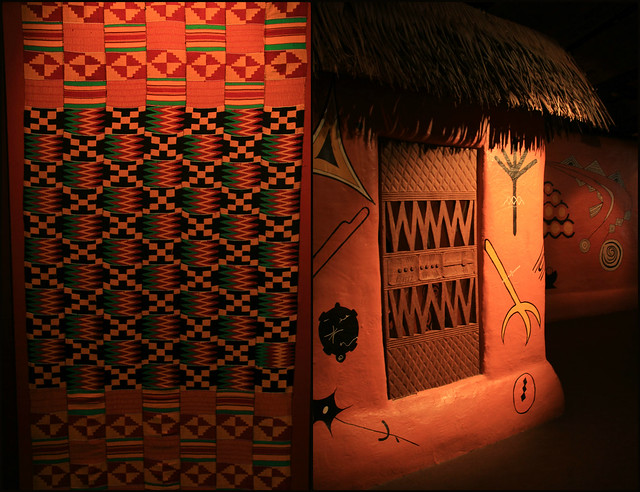 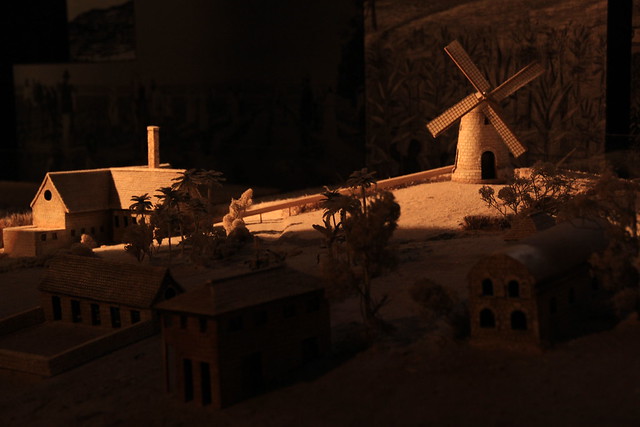 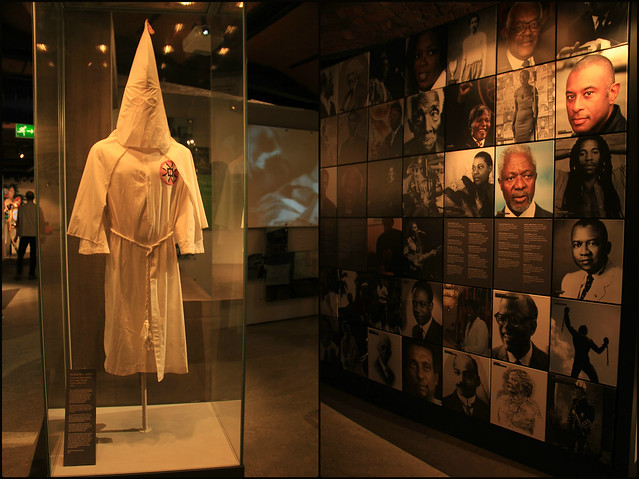 Did you know that the reason our household dusters are yellow is because yellow is the colour of the flag that was flown by ships to signal that their crew and passengers were free of germs and diseases? Nope, me neither!

Although a lot smaller than the maritime museum and some galleries do incur a charge to view, the Tate Liverpool has some fascinating and regularly-changing exhibitions of paintings and sculptures by both British and International artists. 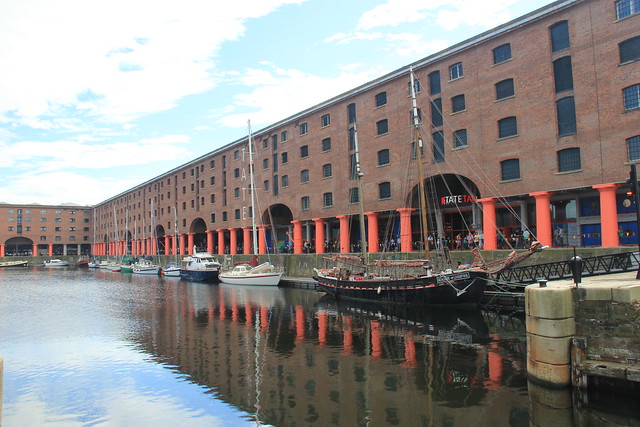 There are Ziferblat cafes located in Liverpool (this Albert Dock one and also one in St. Paul’s Square), Manchester and London.

It’s an innovative new concept where everything is free (coffee, tea, juices, breads, cakes and biscuits) apart from the time you spend there. 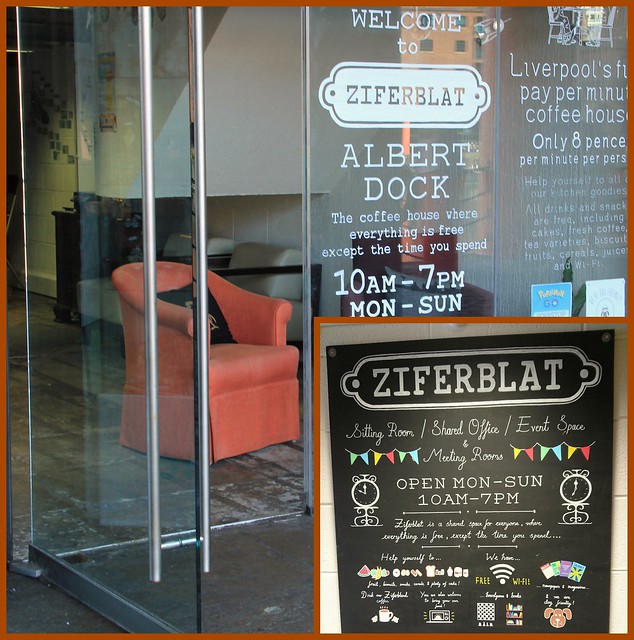 The temptation may be to see how many cakes you can demolish in five minutes, but the founders of Ziferblat are hoping that their relaxing, creative, homely space will encourage you to linger for a little longer…

Update 2019: Ziferblat has now closed at the Albert Dock, but there is still a Ziberflat cafe in St. Paul’s Square.

The intriguing juxtaposition of old and new architecture

Just as I found in Bucharest during a recent trip to Romania, Liverpool contains countless examples of the juxtaposition of its historic buildings of varying architectural styles and its innovative modern creations.

These are just a few examples I found in the city. 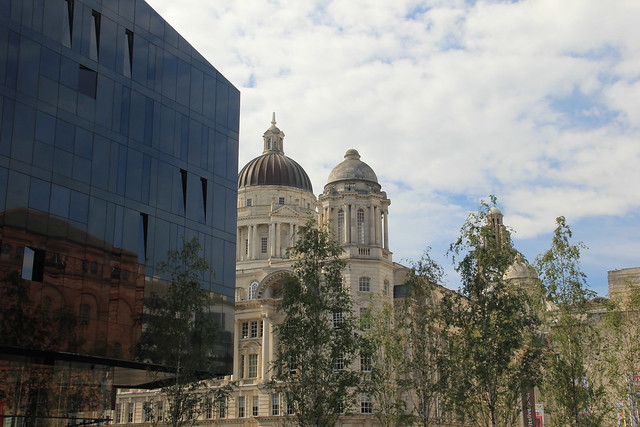 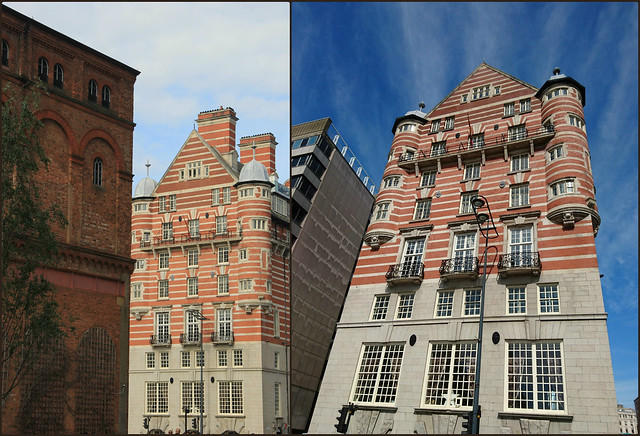 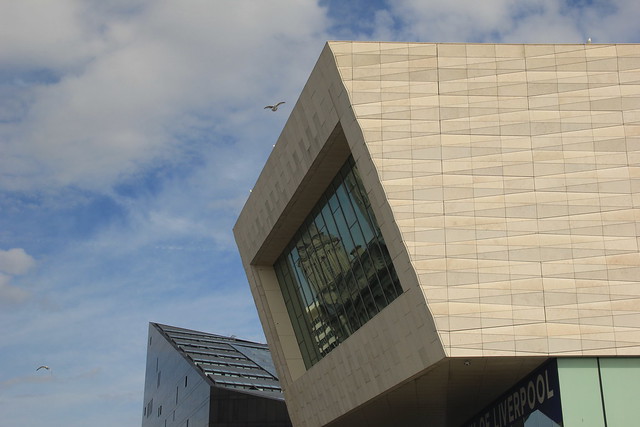 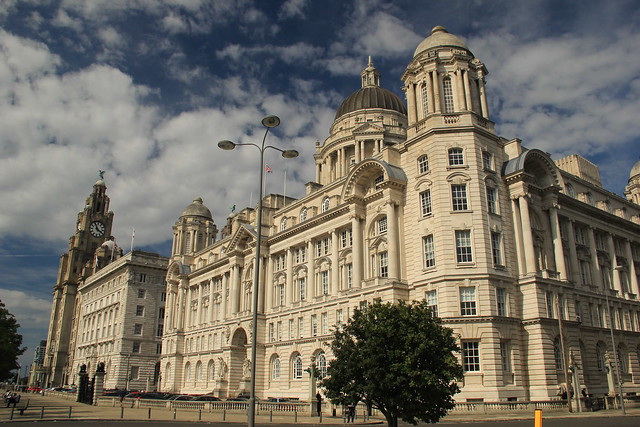 The Cathedrals – yes there are two!

We didn’t have time to go inside on this occasion, but I can thoroughly recommend a climb to the top of its 101-metre-high tower for some fantastic panoramic views of the city. 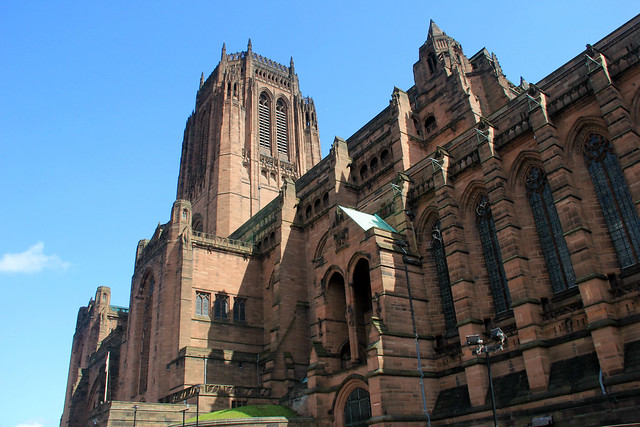 Liverpool’s ‘other’ cathedral is the love-it-or-hate-it-style modern creation you’ll find next to the main John Moore’s University building – the Metropolitan Cathedral.  I think I’m leaning more towards the “hate it” side of the dividing line, but it’s definitely worth checking out if you’re in the area. 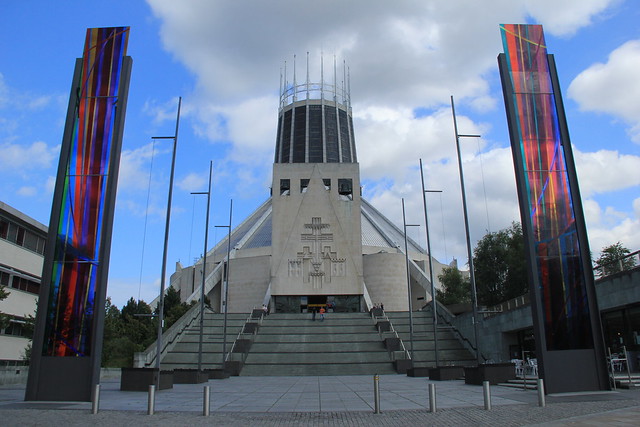 As well as some more off-beat destinations around the world, incredible street art can be found in abundance throughout Britain’s great cities.  One of the things I love about making street art discoveries in a new town or city is that they are just that – discoveries. You won’t find them listed in guide books or on maps; you have no idea where they will appear, until they do.

I couldn’t even pinpoint the exact street on which I discovered these.  All I can tell you is that if you walk from the Tune Hotel to the Superlambanana (more on that in a minute!), following the shortest route on Google Maps, you’ll pass them both.

If you love quirky artwork, you’ll want to hunt out the Superlambanana.  Weighing almost eight tons and standing 17-feet tall, this giant yellow sculpture is supposed to be – as the name suggests – a cross between a lamb and a banana.  It was designed by Manhattan-based Japanese artist Taro Chiezo. 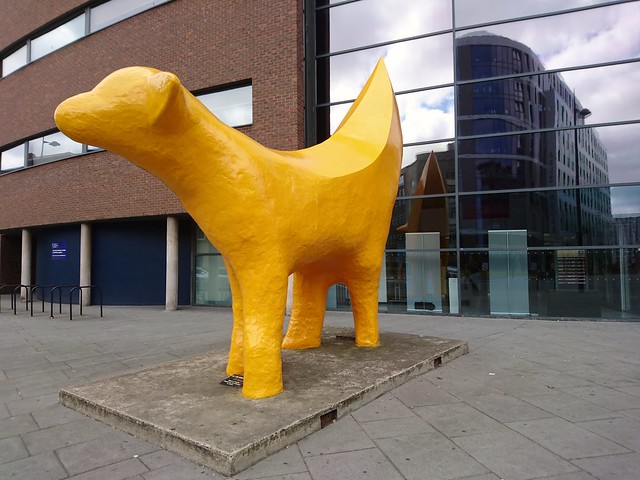 I actually found out about this bizarre creation via a blog post, which stated that it was located outside John Moore’s University.  I duly tapped John Moore’s University into Google Maps and set off in search of the Superlambanana.  After wandering the grounds for far longer than Stu was prepared to tolerate, I admitted defeat and returned to the centre of Liverpool disappointed.

Determined not to give up on my quest I asked my Facebook friends if any of them knew its whereabouts, and fortunately my old university friend, Diane came to my rescue.  You’ll actually find the Superlambanana at 79 Tithebarn Street outside the Avril Robart’s library building – part of John Moore’s University and a 20-minute walk from the main building.

This immense, beautifully-crafted traditional Chinese Arch (which is actually the largest Chinese Arch outside China) marks the entrance to Liverpool’s Chinatown – home to the oldest Chinese Community in Europe.  It was imported from Shanghai and then reconstructed by craftsmen from China.

The arch features 200 dragons and a mixture of stunning red, gold, green, blue, and yellow colours, which shimmer under the glow of the warm summer sun. 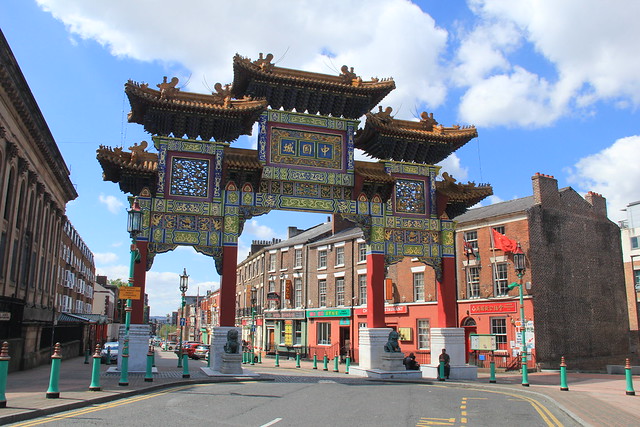 Just a 10-minute walk from the city centre, The Baltic Triangle is Liverpool’s old industrial district, and as a result is filled with grade II listed warehouses and impressive red brick architecture.  It’s an area that 40% of the world’s trade passed through in the 18th and 19th centuries. 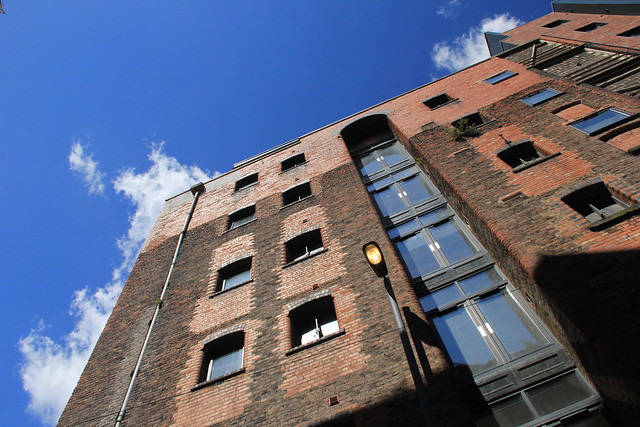 Nowadays The Baltic Triangle  is undergoing a surge of redevelopment.  It’s a place where Liverpool’s creative crowd rub shoulders with each other, and is home to some of the city’s best bars and clubs. 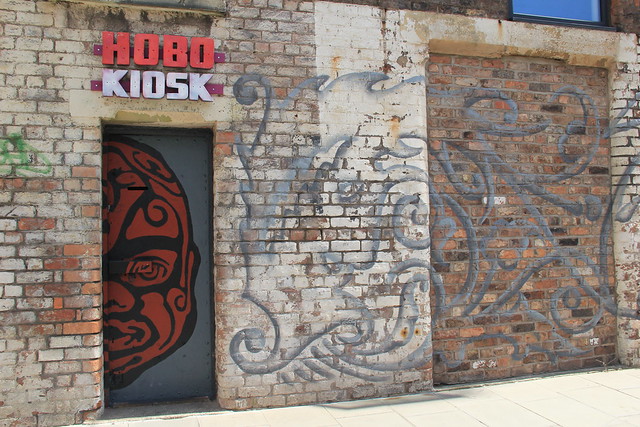 Camp and Furnace is regarded by many as Liverpool’s finest bar and event space.  Opened in 2012, the Camp and Furnace is a former warehouse that hosts mini festivals and is also home to photographic and film studios.  You’ll also find a snug with a roaring fire and real-ale bar. Plus there’s food served from the on-site kitchen.

Reminiscent of Calle Cava Baja in Madrid, Bold Street is an entire street dedicated to top quality cafes and restaurants.  It’s located just a short walk from anything in the city centre and is THE place to come for breakfast, lunch, or dinner during your weekend in Liverpool.

We loved Leaf for breakfast (but be prepared to queue) and Mowgli for some Indian Street Food in the evening.  It’s the first time I’ve ever tried cheese on toast cooked Himalayan style! 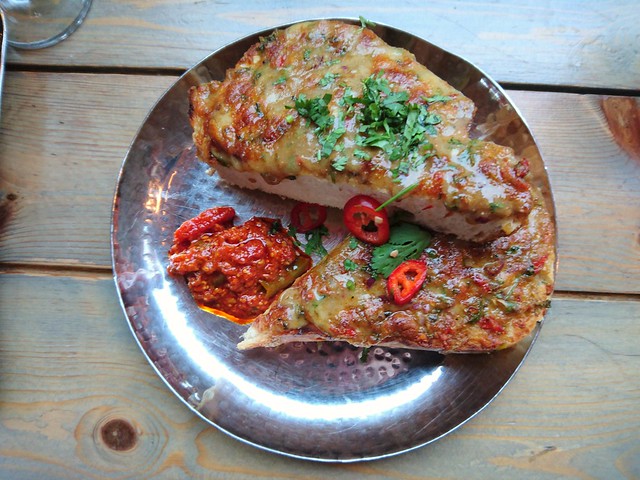 Located at the point where Liverpool’s shopping district meets (one of) its nightlife hubs, Salt House Tapas serves some tasty tapas and delicious cocktails in one of Liverpool’s most beautiful historic buildings. 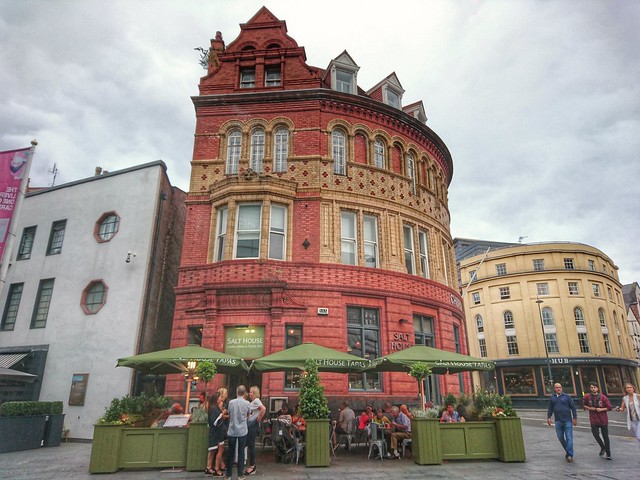 You may be noticing a bit of a theme here!  You wouldn’t think it to look at me but I love my food – especially when it’s lashings of smoked salmon, creamy scrambled egg and ripe avocado. I didn’t get a photo because I’d already demolished half of it by the time I thought about taking one.

We were lucky enough to snag the one remaining table outside when we rocked up for breakfast, but everyone who arrived after us was being turned away.  Make sure you turn up early (Moose Coffee opens at 8am Mon-Sat or at 9am on a Sunday) to be guaranteed a table.

Check out the nightlife

During our weekend in Liverpool we only made it to two bars, but I can definitely recommend Brew Dog (if you like your ale) and Motel for cocktails and beats.

We also tried to check out the mysterious (due to its rather innocuous exterior and closed curtains) Berry and Rye – reportedly the smallest bar in Liverpool with great cocktails and even better live music offerings.

However the rather intimidating bouncer who appeared at the doorway as we were trying to peer through the curtains clearly didn’t like the look of us and declared that the place was full.  I’d love to know what it’s like inside; let me know if any of you manage to gain entry!

Weekend in Liverpool | Where to Stay

I’ve visited Liverpool twice now and both times I’ve stayed at The Tune Hotel.  It’s nothing fancy, but the rooms are modern and clean and, considering the hotel’s fantastic central location, represent incredible value for money.

It also happens to be located along the same street or literally around the corner from three of my favourite restaurants, and is only a 10-minute walk from the bars and restaurants of Bold Street.

And tell me, what should I put on the itinerary for my next weekend in Liverpool? 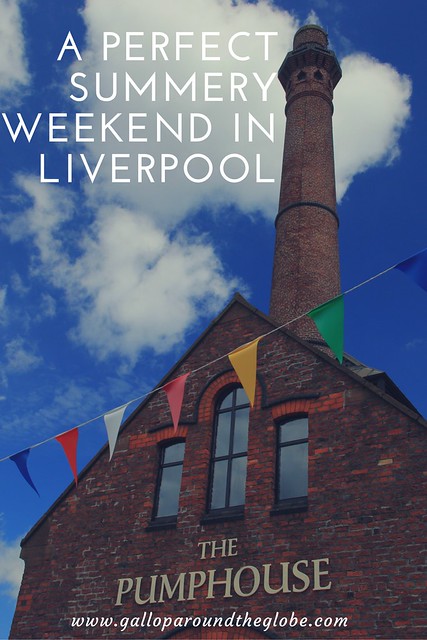 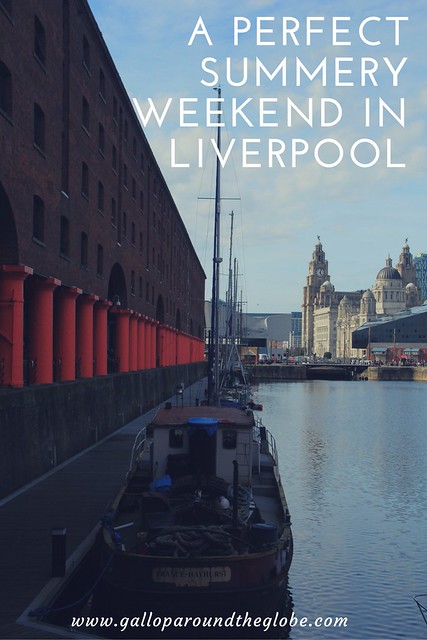 Discovering the Beauty of Brasov – Gallop Around The Globe