Granada is one of my favourite Andalucian cities.  I can happily while away days wandering through the labyrinthine streets of its Albayzín.  It is of course also home to the magnificent Alhambra – which rises up on the opposite side of the Darro Valley – as well as countless Teterías (tea shops) and tapas bars.  Granada is one of the few places that still serves tapas as it was originally served – free of charge, one for each drink you buy.

But, having got our fix of sunshine and snow (Granada is surrounded by the snow-capped peaks of the Sierra Nevada mountain range) and comforting familiarity, it was time to head somewhere new.  I’d combined previous trips to Granada with visits to both Seville and Córdoba, but I’d never made it down to Ronda. 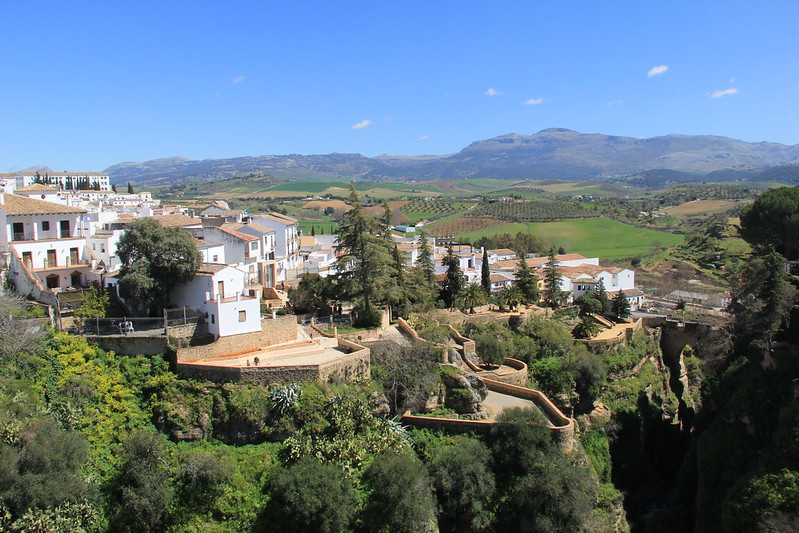 Ronda is supposedly one of Spain’s oldest settlements, situated 180 kilometres southwest of Granada, on the edge of the Sierra de Grazalema National Park.   Ordinarily this would be an easy 3-hour run by road, along the A-92 (we’d chosen to hire a car so that we could continue our tour of Andalucia’s pueblos blancos (white towns) after leaving Ronda), however Stu decided that we were going to take the (not so) scenic route along the coast.

He’s a little bit obsessed with the ocean and seems to only be truly happy when he can see the sea, hear the waves and taste the salt in the air.  So, instead of heading west out of Granada, we drove directly south towards Motril, in order to pick up the coast road.  The coast road was painfully slow, and – with the exception of Nerja – lined with gaudy beach resorts overrun with British holidaymakers.

We completed the final climb up to Ronda, along the steep and winding A-397, in the dark, having no point of reference with which to find our hotel, other than the name of the street upon which it was located.  By some miracle we found ourselves driving past the end of the very road we needed to find. 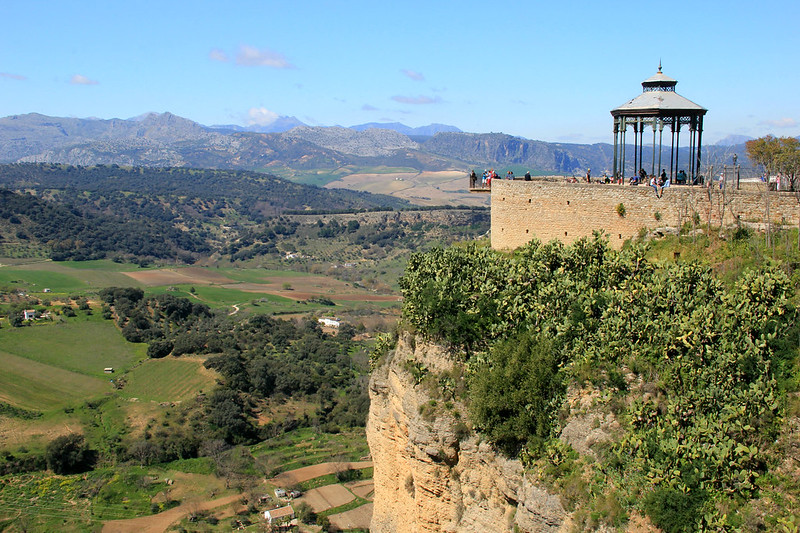 Present-day Ronda comprises of its old Moorish town, La Ciudad, and the largely modern Mercadillo quarter – split in half by the gaping river gorge of El Tajo.  Construction of the iconic Puente Nuevo (new bridge) – designed to link La Ciudad with Mercadillo – began in 1751, and was completed in 1793.  It towers 120 metres above the canyon floor, and is Ronda’s primary tourist attraction.

We visited Ronda towards the end of March (low season) and, although the streets of its old Moorish town remained largely devoid of tourists, I could not say the same for other parts of town – specifically the areas close to Plaza de España and the Puente Nuevo.  With Ronda’s proximity to the Costa del Sol, I guess this is to be expected (it’s an easy day-trip from Málaga), but I dread to think how much worse the influx of tourists would be in the height of summer.  Ronda is definitely somewhere that’s best  visited off-season! 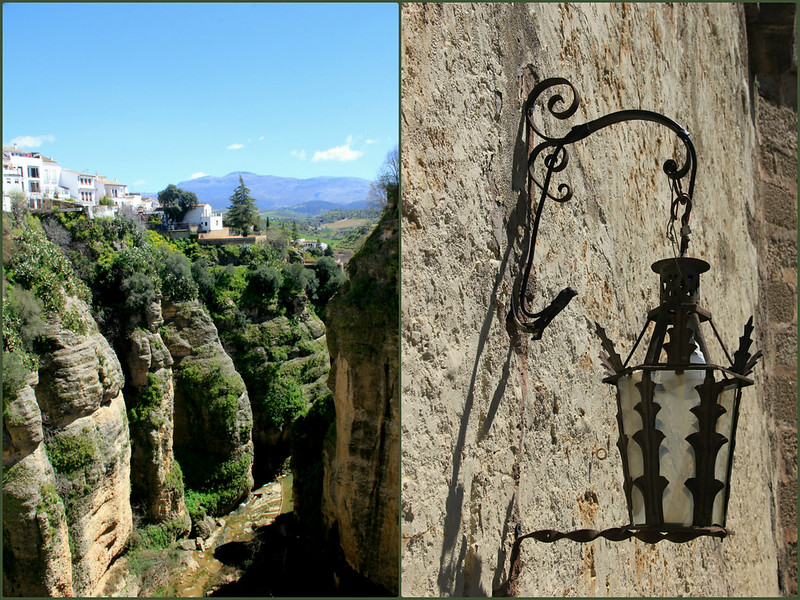 We had just one full day in Ronda to hit up the main sights – not ideal but enough to provide us with a good introduction to the rugged mountain town that inspired authors such as Earnest Hemingway and Orson Wells. 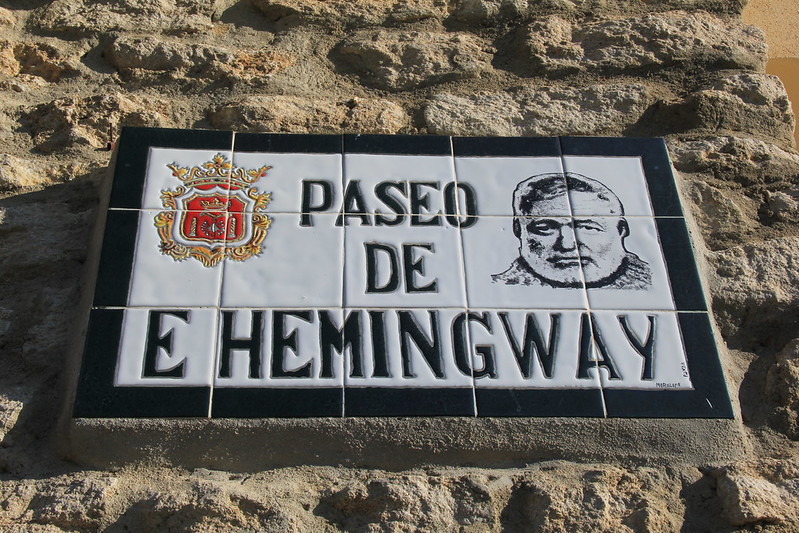 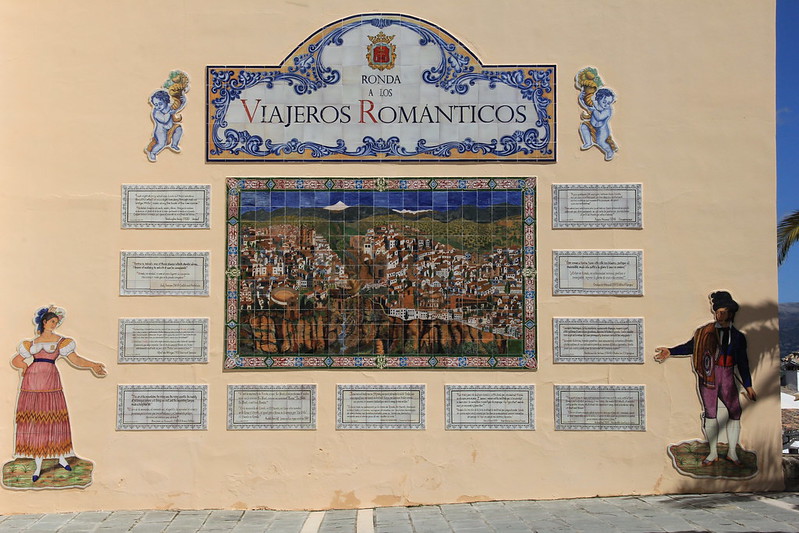 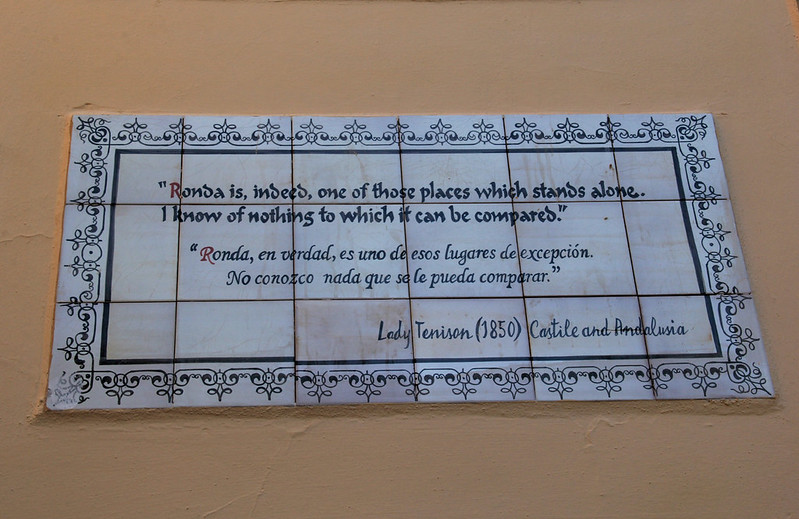 A lot of people (especially those on day-trips from Málaga) don’t make it any further than the Puente Nuevo viewpoint (just off Plaza del Campillo), but they should.  The best parts of Ronda in my opinion are the maze of streets branching out from Plaza Mondragon. 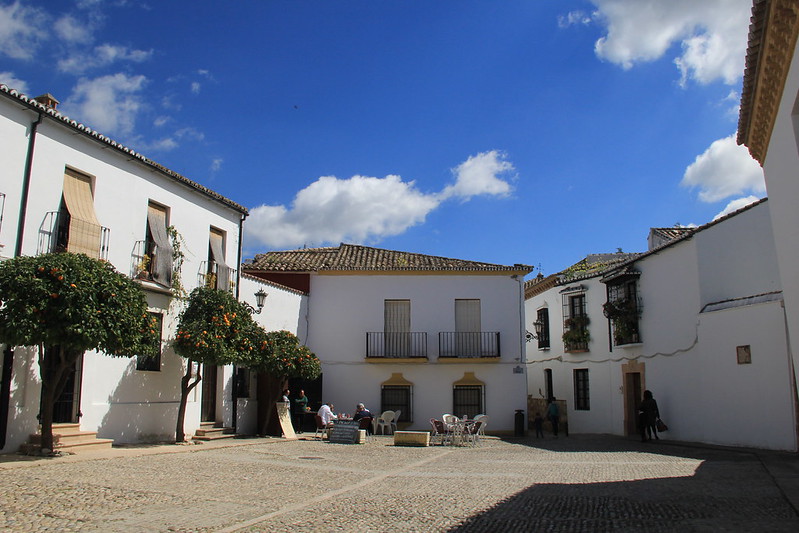 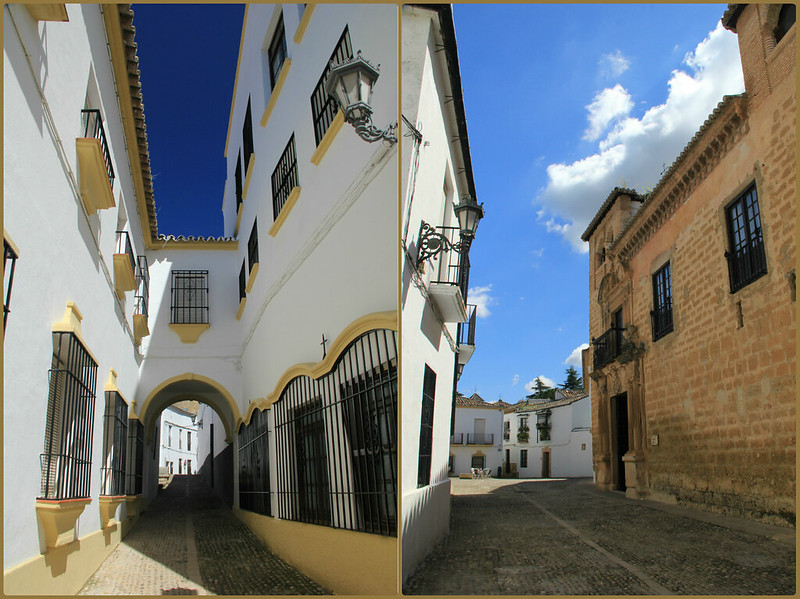 The nearby Plaza Duquesa de Parcent – an attractive leafy square containing an abundance of monuments – is also a great place to grab a coffee and a spot of tapas and watch the world go by. 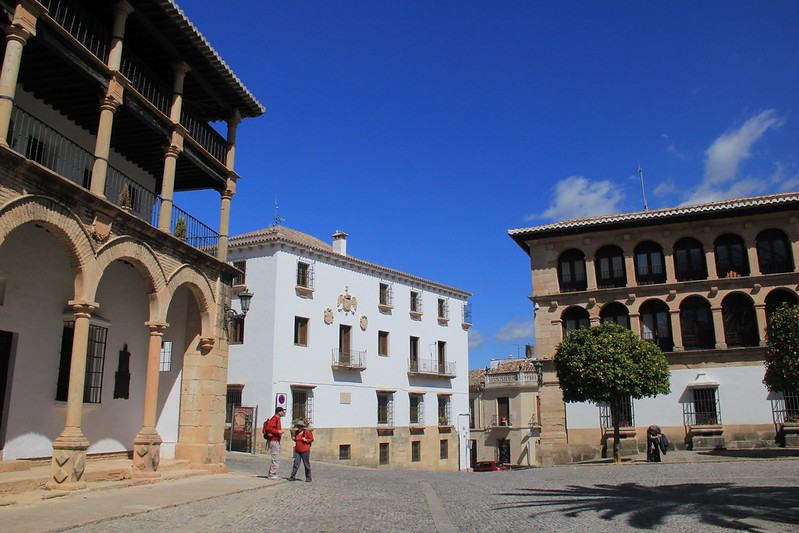 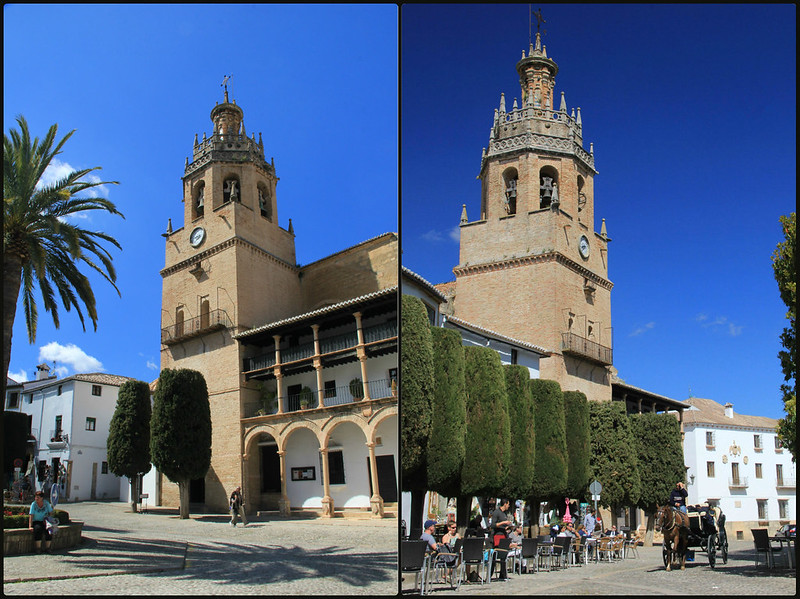 Watching the mid-afternoon sun light up the Puente Nuevo

We followed a small paved track that led downhill from the Plaza del Campillo, a pathway that may well have wound up at the base of the gorge had we followed it far enough to find out.  Instead we stopped at a viewpoint part the way down and perched upon a large rock on the edge of the valley. 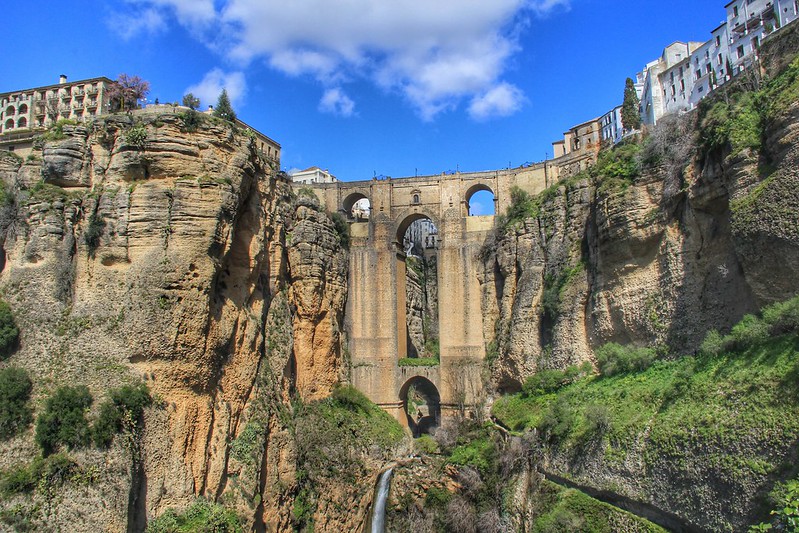 Taking a stroll to the Barrio de San Francisco

Continue walking downhill from Plaza Duquesa de Parcent and you’ll find yourself in the tranquil Barrio de San Francisco.  Very few tourists venture this far as there’s not a lot to ‘see’ down here once you pass the old town walls, but if you want a slice of life in Ronda away from the visiting crowds then this is the place to find it. 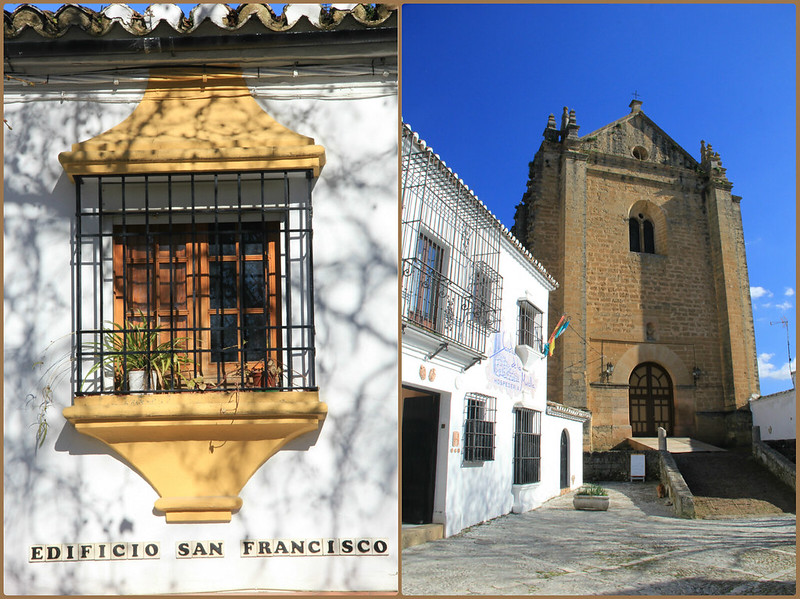 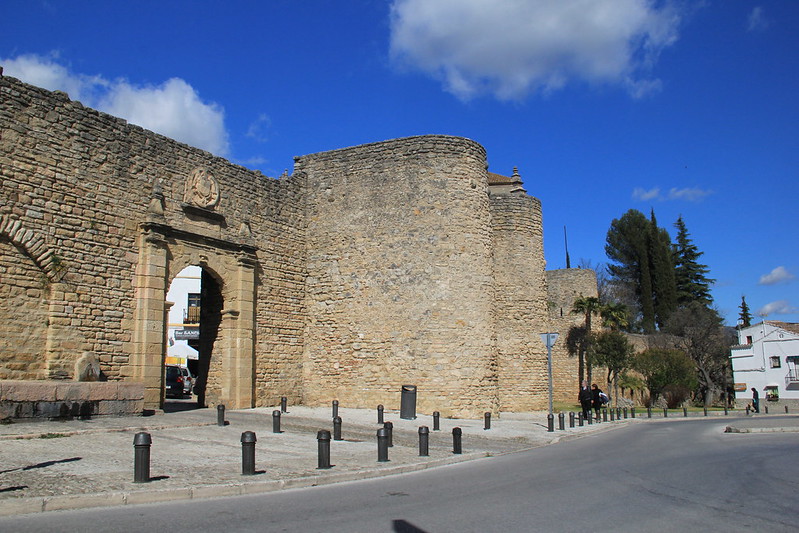 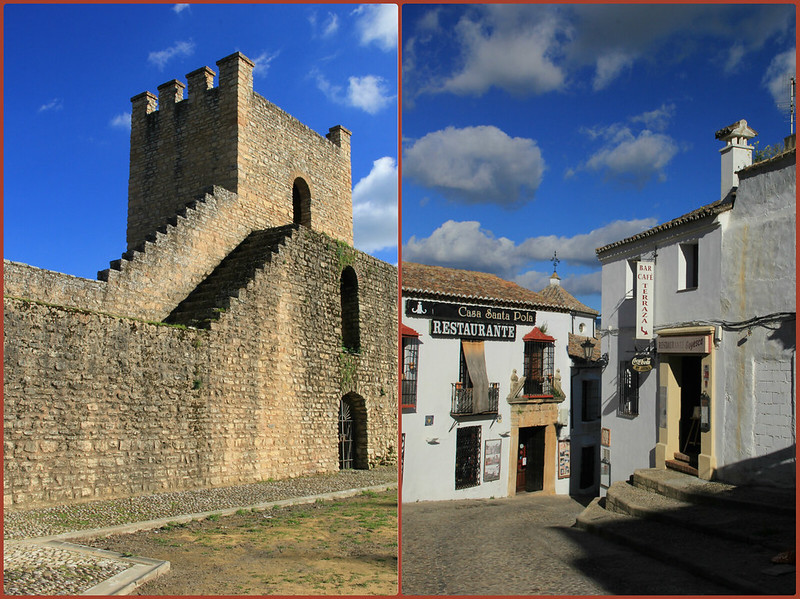 There’s also a great little tapas bar here – possibly the original Barrio de San Francisco tapas bar, judging by its name. The menu is extensive, the food is really fresh, the portion sizes are large, the prices are embarrassingly cheap, and you might just be lucky enough to be joined by one of the neighbourhood’s friendly felines.

Learning about the town’s bullfighting legacy at Plaza de Toros

I was a little reticent about venturing inside here in the first place (and therefore about recommending that you do the same), because I’m really not big on bullfighting from an animal cruelty perspective.  However I do find it interesting from a cultural point of view, and – whether right or wrongly so – it’s a fundamental part of Spain’s history. 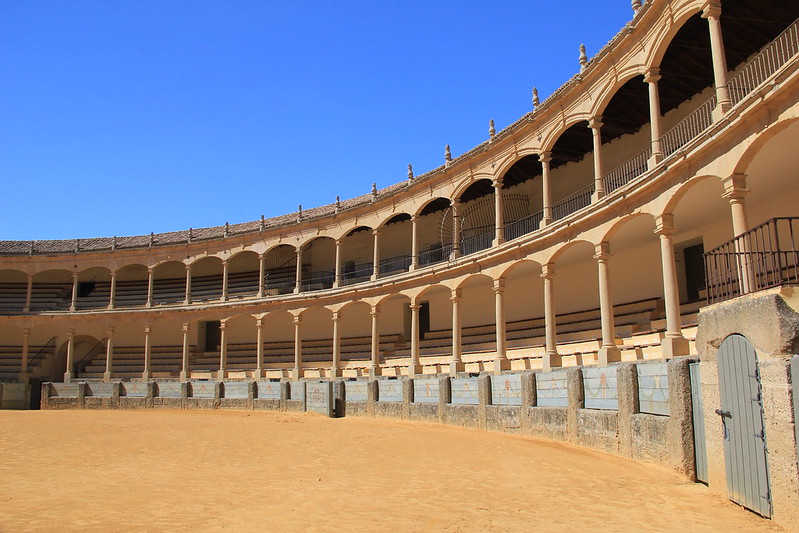 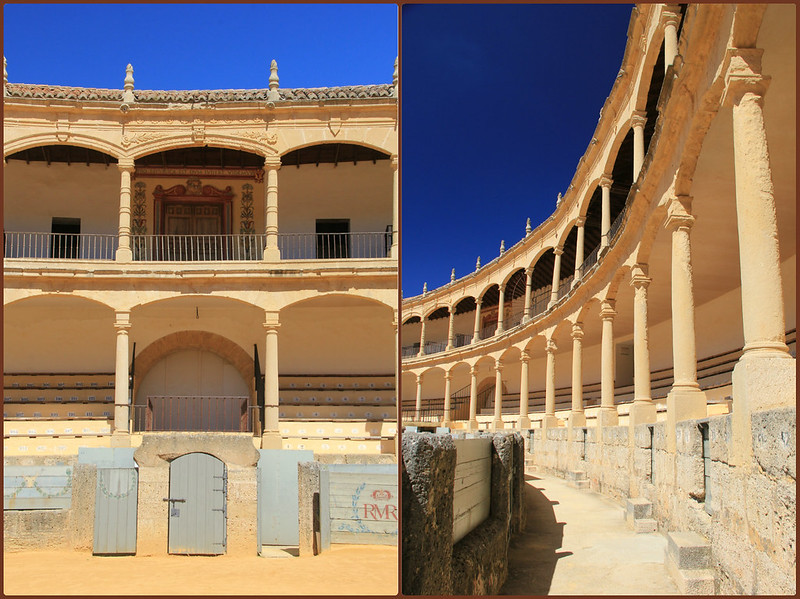 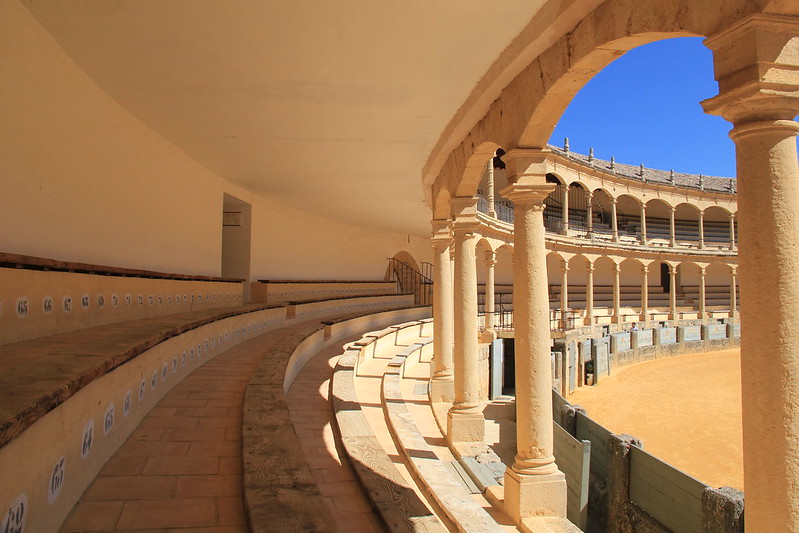 The bullring in Ronda is perhaps the oldest in the country, and only used for bullfights in September, so for the rest of the year tourists are free to roam around its grounds for the cost of a few euros. 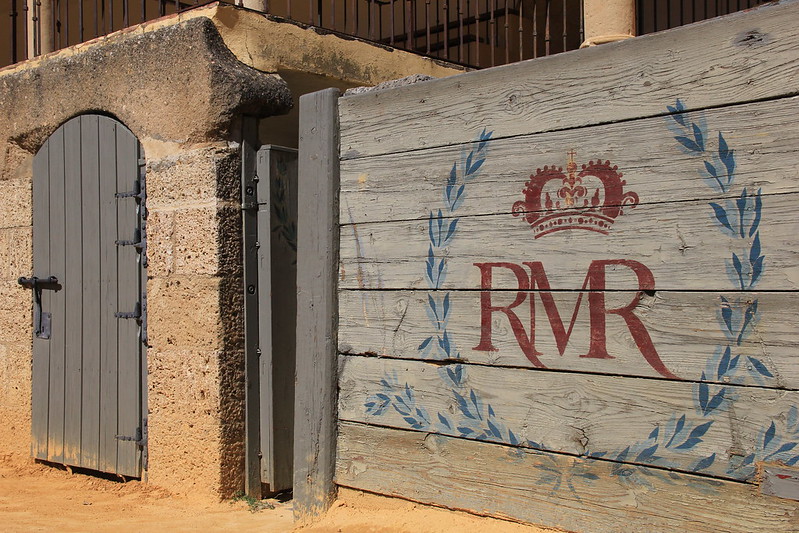 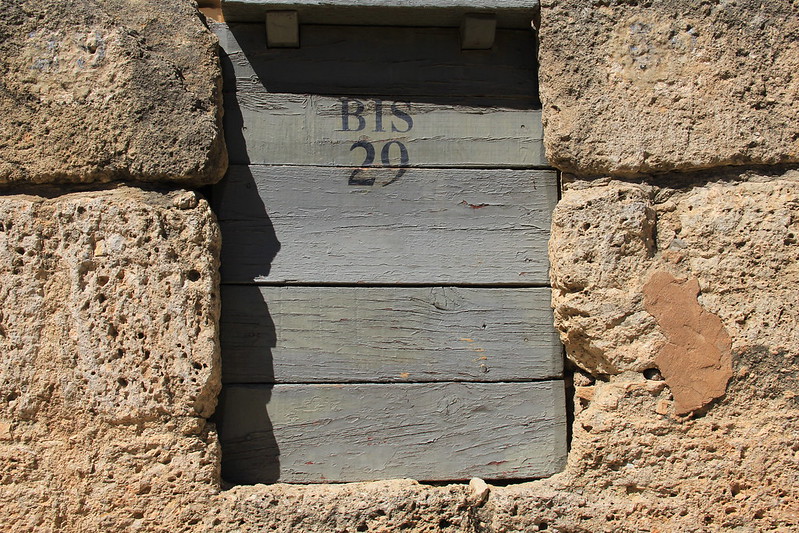 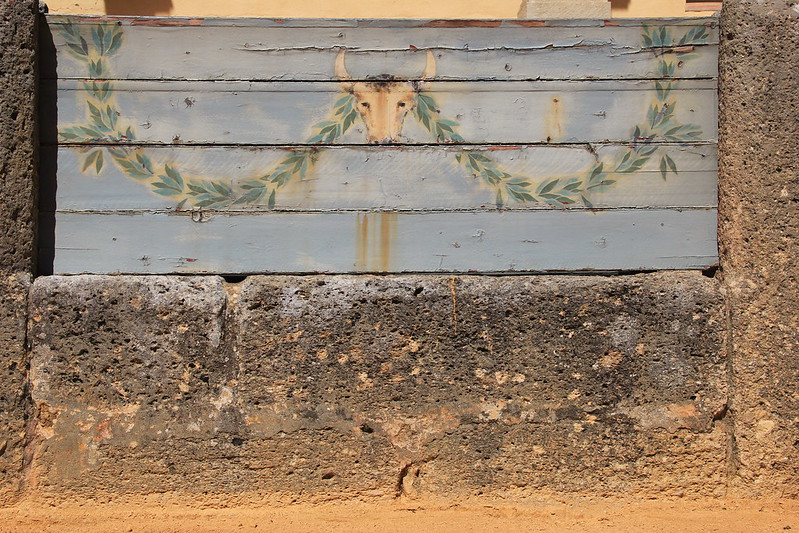 As well as wandering the grounds of the arena itself, it was also possible to climb the terraces, visit the stables, and peruse the bullfighting and antique weapons museums inside. 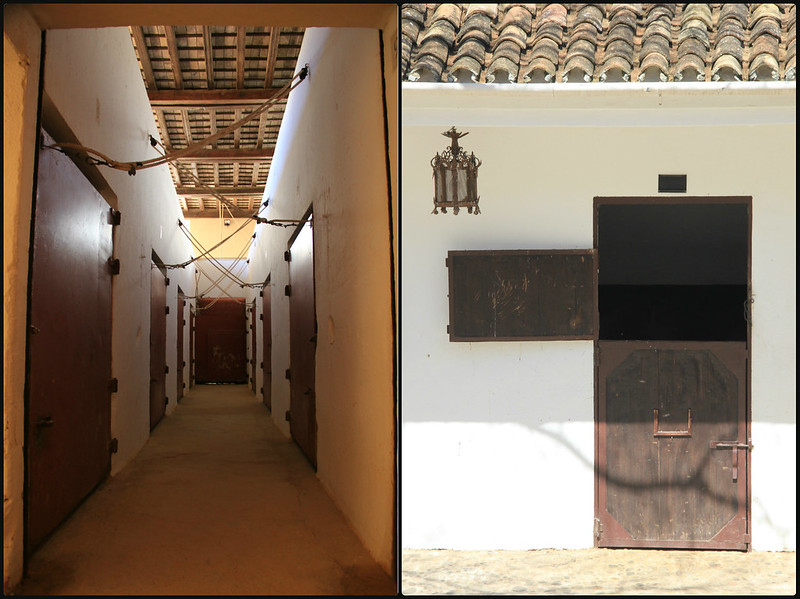 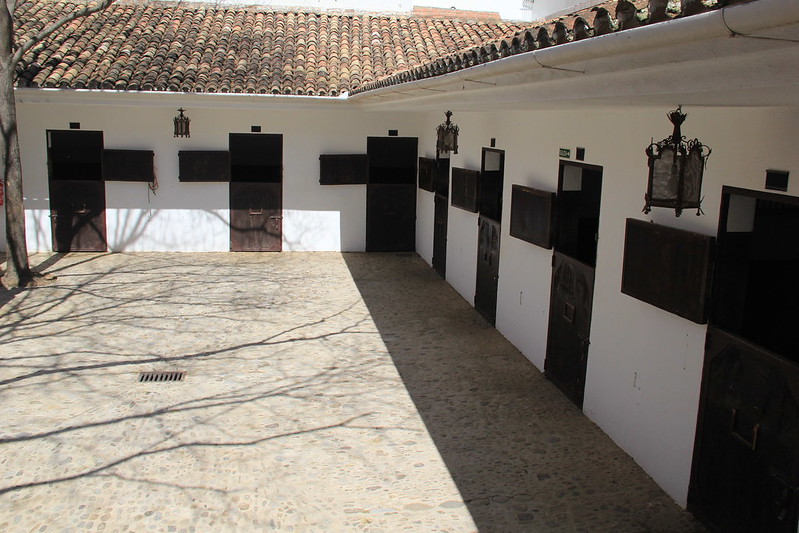 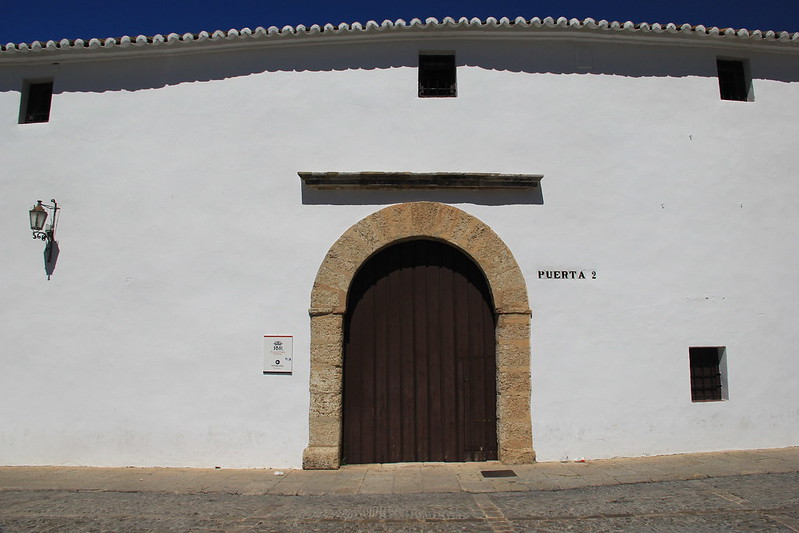 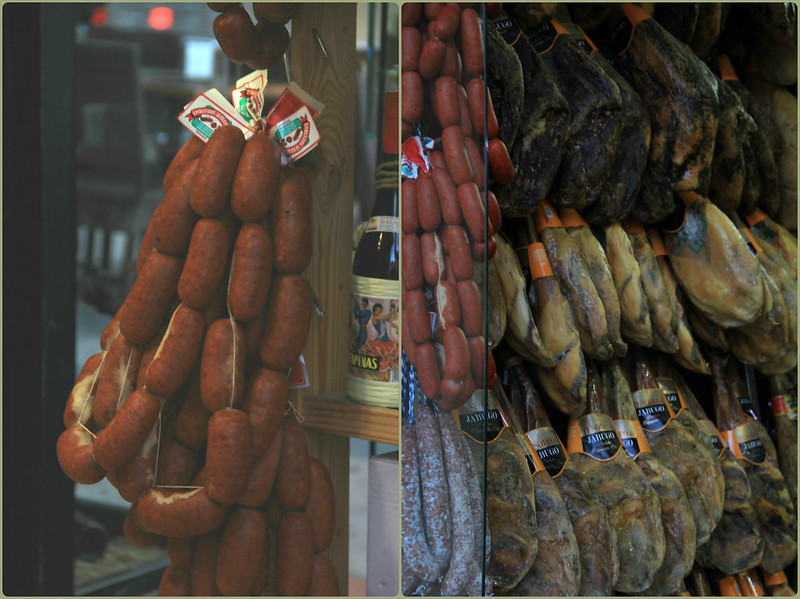 If neither of these take your fancy (or are fully booked), similarly-priced options include San Cayetano, Virgin de los Reyes, or Hotel Andalucia. 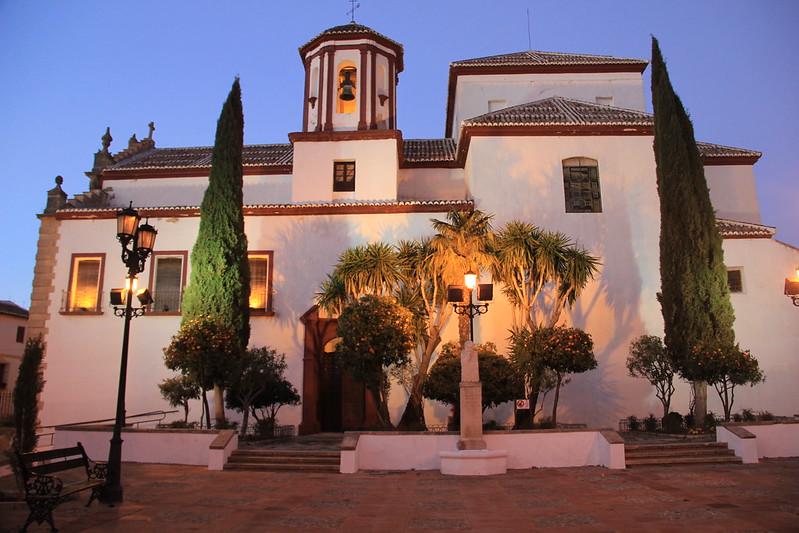 **Some of the links in this post are affiliate links.  All this means is that if you book one of the hostels or hotels I have recommended in this post, through the links I have provided, I will earn a small commission as a result but the cost to you will remain exactly the same**

Visiting Kotor: 7 reasons this coastal city in Montenegro totally charmed my socks off

Reflections and Frustrations: Crossing the Border from Peru to Bolivia