A Morning at Mandalay Hill

If you only have a limited amount of time in Mandalay then a visit to Mandalay Hill and the spectacular Su Taung Pyae Pagoda is an absolute must!  Read on for more details about one of Mandalay’s most stunning tourist attractions.

When we were planning our (just shy of) two-week itinerary around Myanmar, we contemplated skipping Mandalay altogether.

It’s Myanmar’s second largest city; a busy, haphazardly expanding metropolis that doesn’t have a ton of immediate appeal (or so we’d heard).  However I was determined to spend a few nights in Chiang Mai (a Southeast Asian city that always feels like home to me) before heading down to Khao Sok National Park and the Andaman Islands, so it made sense to fly there from Mandalay rather than heading back down to Yangon.

And so it was that we continued on to Mandalay with the sole purpose of catching a flight.  For that reason we had to leave Mandalay less than 24 hours after we’d arrived.

This meant that I had to miss out on a sunrise trip to U Bein Bridge (which I was absolutely gutted about) because it was a fairly long way from the ‘centre’ of Mandalay, and Stu always gets super panicky on those days when we have to catch a flight anywhere.

Truth be told I was getting pretty close to travel burnout myself.  We’d been constantly on the go since we arrived in Yangon – a combination of overnight buses, ridiculously early starts to watch sunrises in both Yangon and Bagan, and a reasonably strenuous 3-day trek in the relentless heat between Kalaw and Inle Lake – that the thought of yet another middle-of-the-night wake up call didn’t really excite me.

So instead we decided to have a slightly more leisurely start, followed by a leisurely stroll up to Mandalay Hill.

Mandalay Hill is the reason the city was given its name – because in 1857 Mandalay (မႏၱေလး) was founded by King Mindon at the foot of said hill. 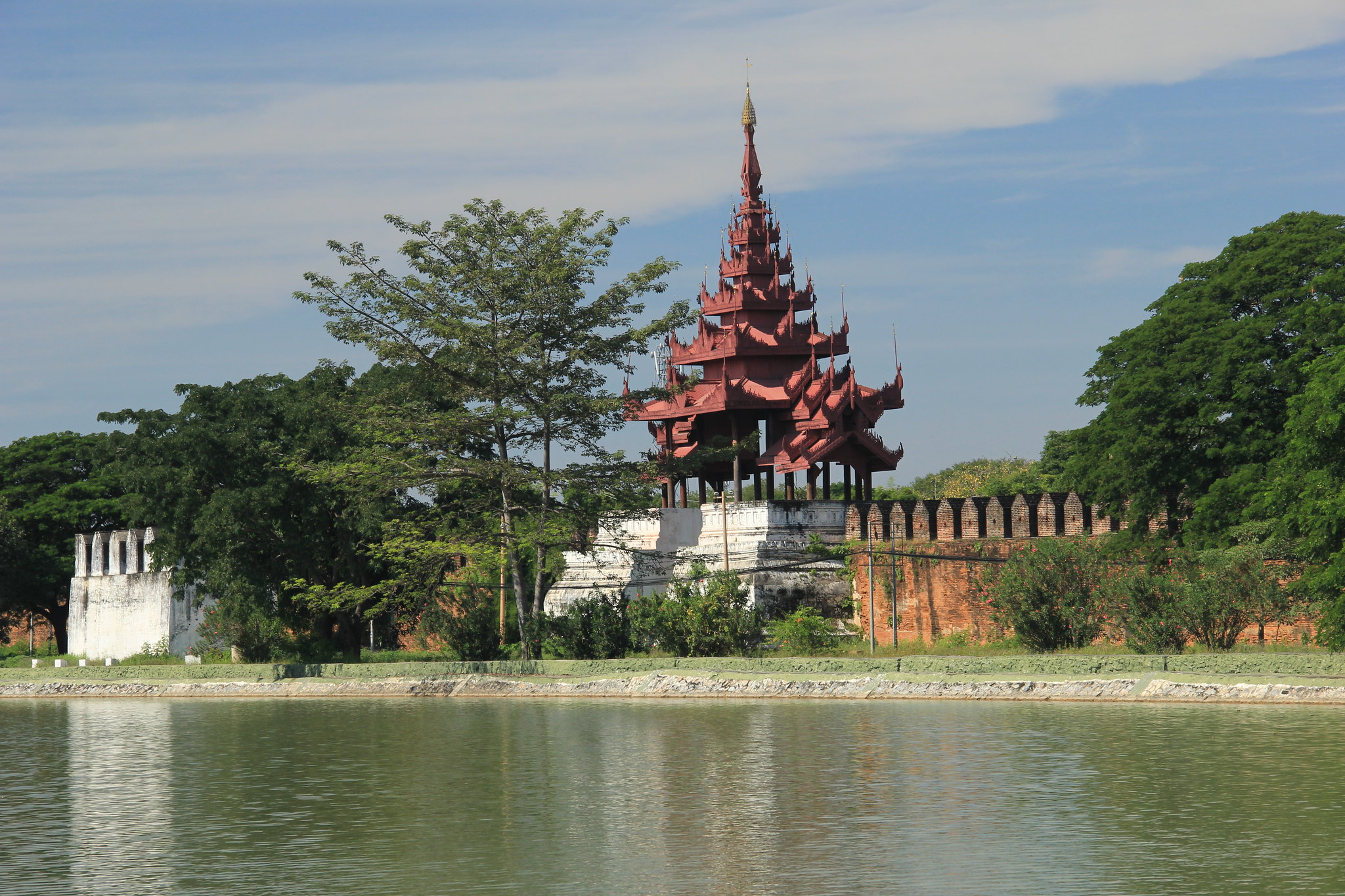 Mandalay Hill is known for its abundance of pagodas and monasteries, and is crowned by the stunning Su Taung Pyae Pagoda, which has been a major pilgrimage site for Burmese Buddhists for nearly two centuries.

It’s located northeast of the centre of Mandalay and offers fantastic views across the city and Ayeyarwaddy River. 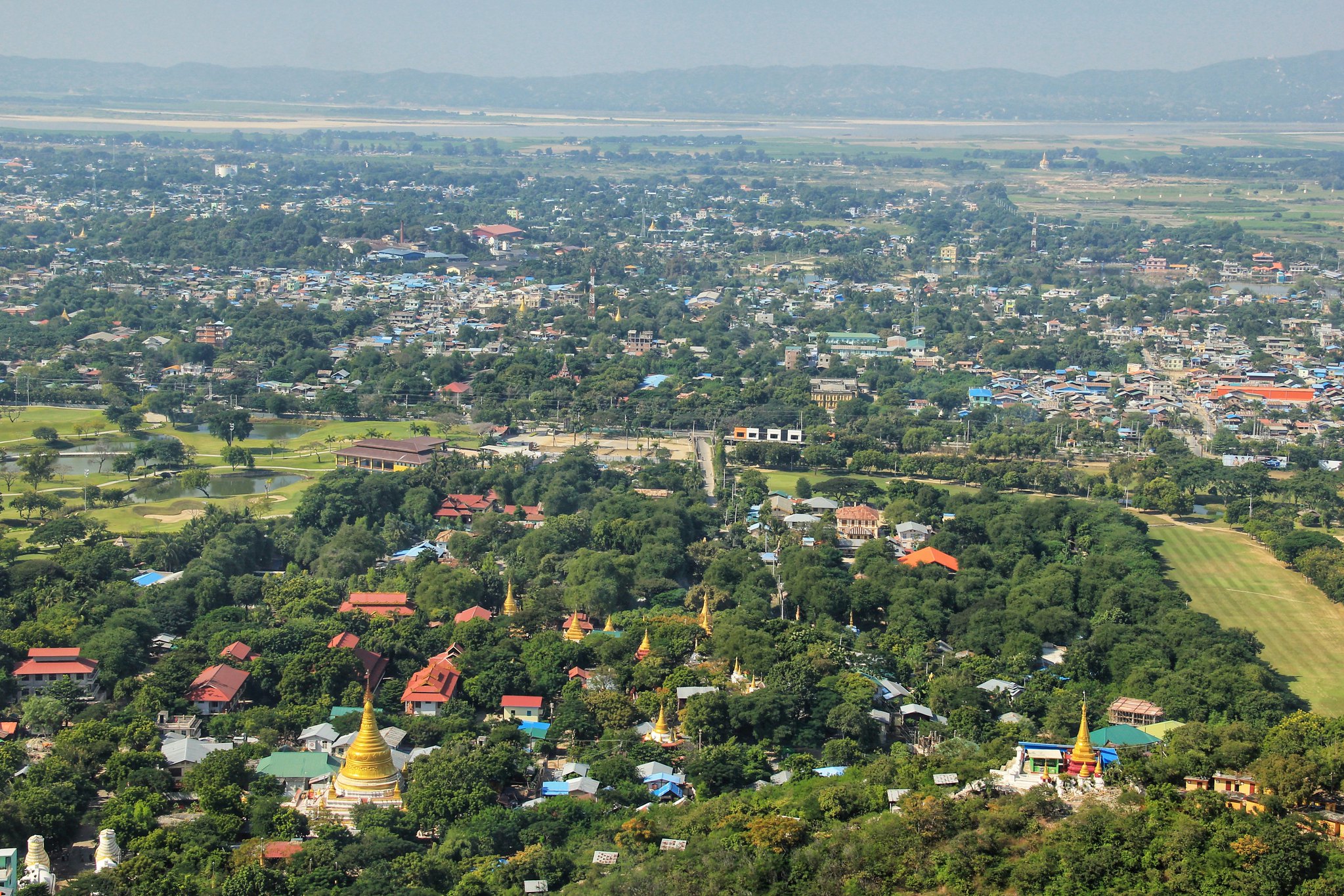 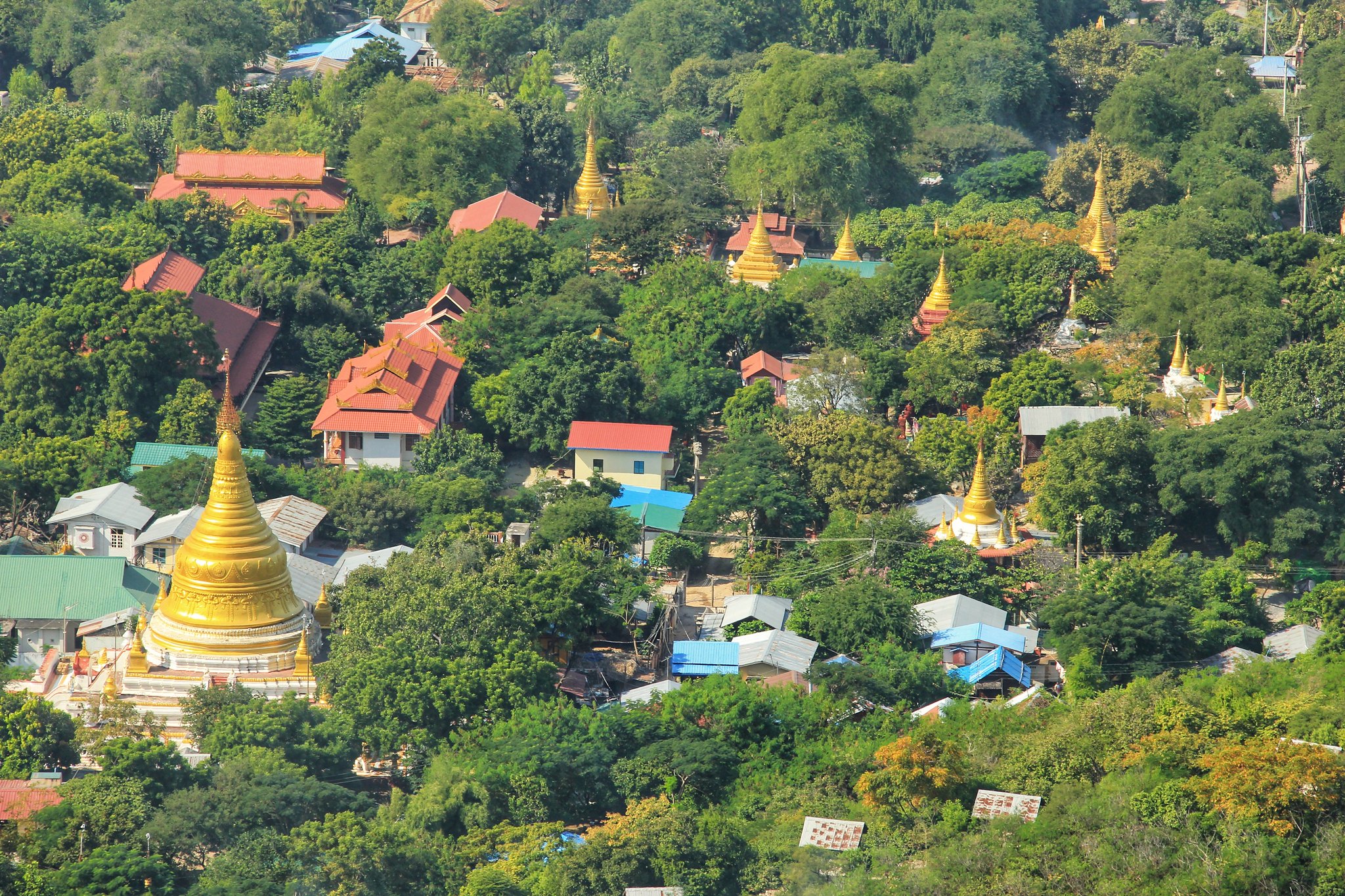 Side note: Mandalay Hill is also the only place that you can buy a 10,000 kyat Archeological Zone (‘combo’) ticket, which you’ll need if you want to be able to visit several of Mandalay’s top attractions.  So, even if you plan to spend longer than 24 hours in the city, you kinda need to come here first.

From our hotel, it was a 6.2 kilometre walk up to the top of the hill (we grabbed a taxi back to save time).  If you’re staying anywhere near the old fortress, you can follow a similar route:

Mandalay’s city streets are laid out on a grid system, which sounds like it should make navigation simple, but in practice it doesn’t work that way, so it’s always best to load a map before setting out.

Once you reach the entrance to Mandalay Hill (marked by two giant chinthe (half-lion, half-dragon guardian dieties)), a covered concrete staircase leads uphill.  There are 1729 steps altogether, many of which must be climbed barefoot so bring a plastic bag with you to carry your shoes. 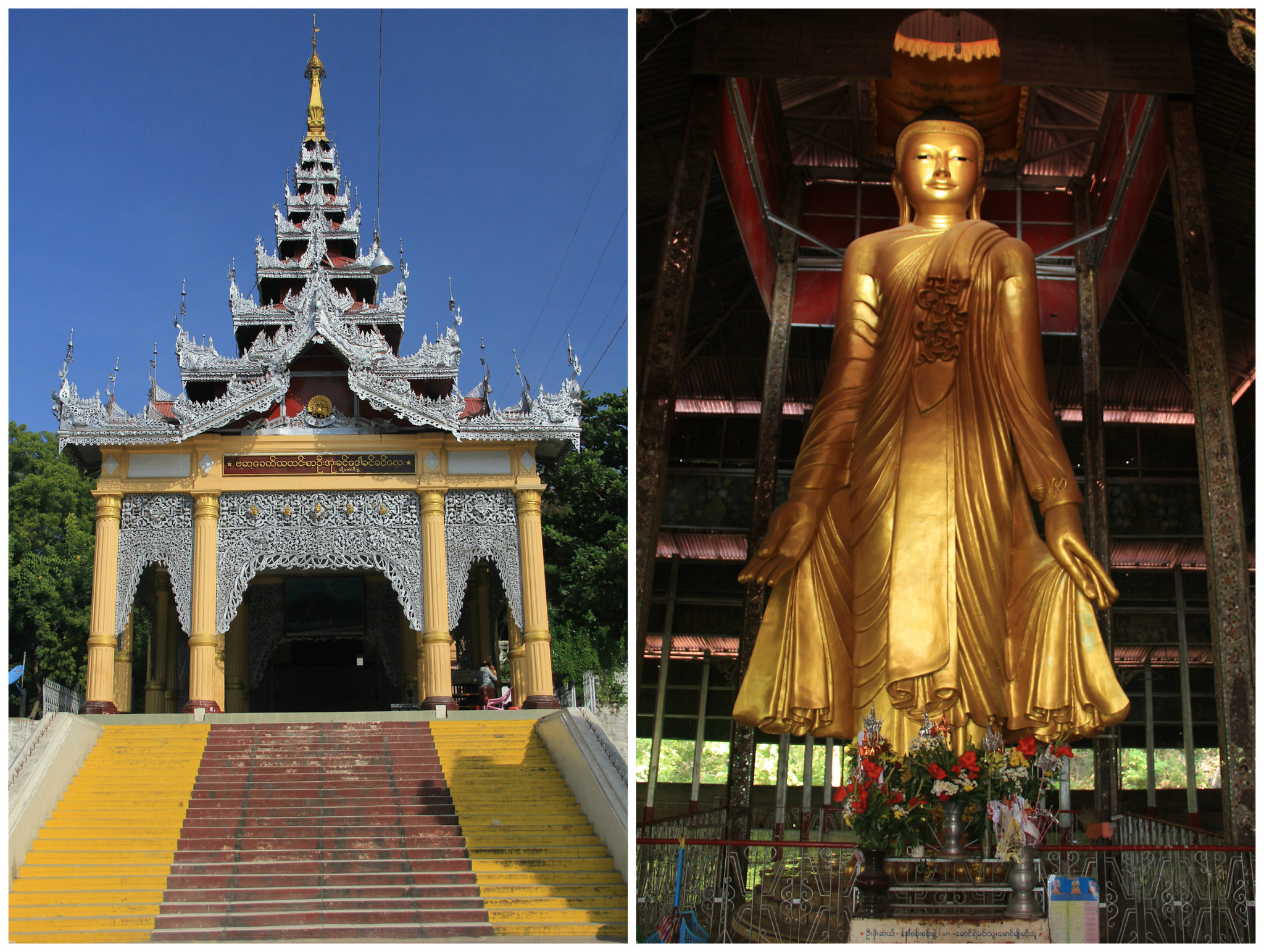 The first significant sight you’ll reach is the World’s Largest Book at Kuthodaw Pagoda.  Around the stupa of this pagoda are 729 text-inscribed marble slabs that together present the entire 15 books of the Tripitaka (Buddhist scriptures).   Another 1774 ring the nearby Sandamuni Pagoda, and collectively the 2503 slabs are often cited as the ‘World’s Largest Book.’

I’m not entirely sure how you know where to begin when reading this book, and in what order you continue, but Burmese script is utterly beautiful to the foreign, untrained eye, so it didn’t really matter that I didn’t have a clue what any of it said. 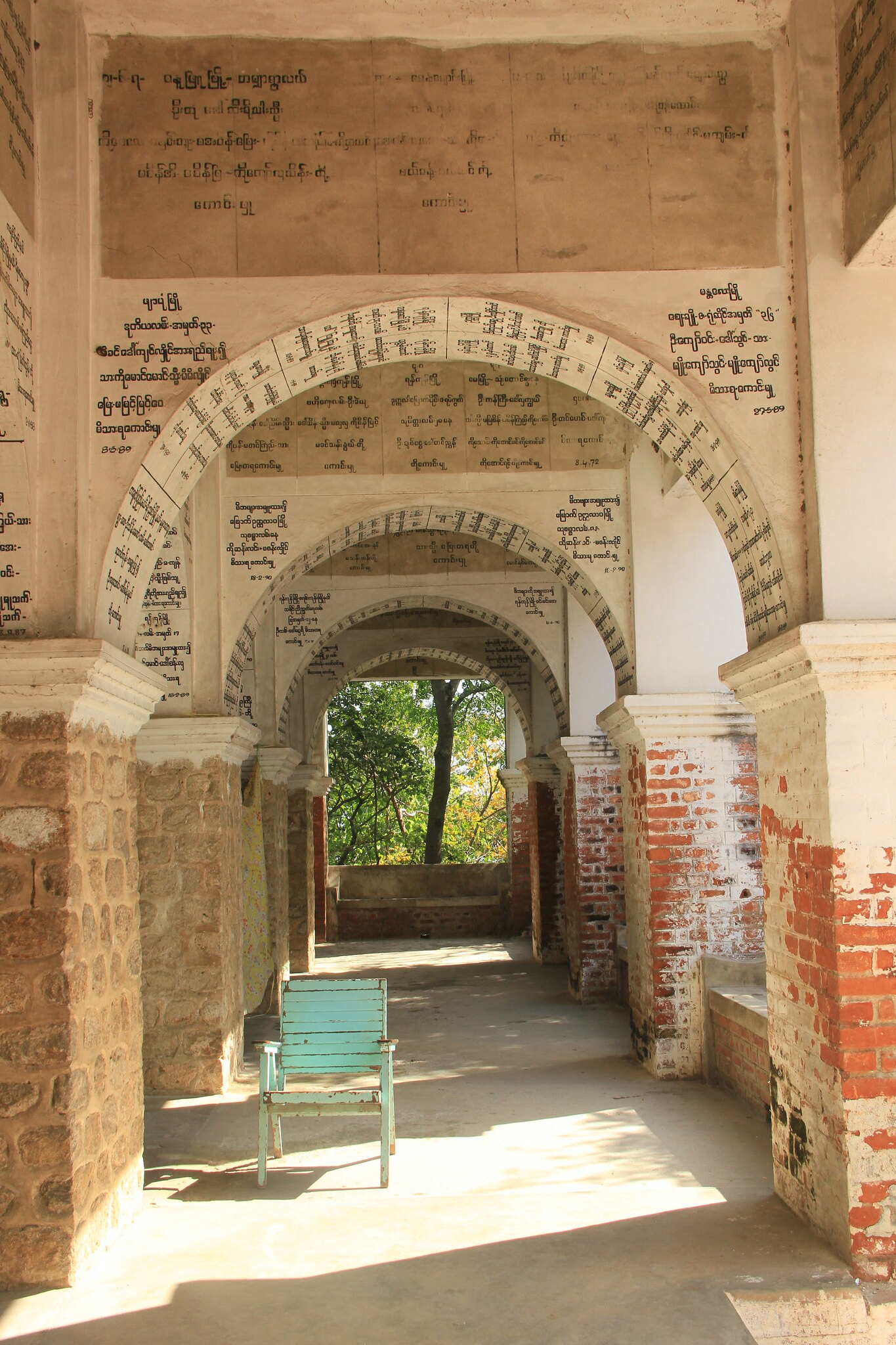 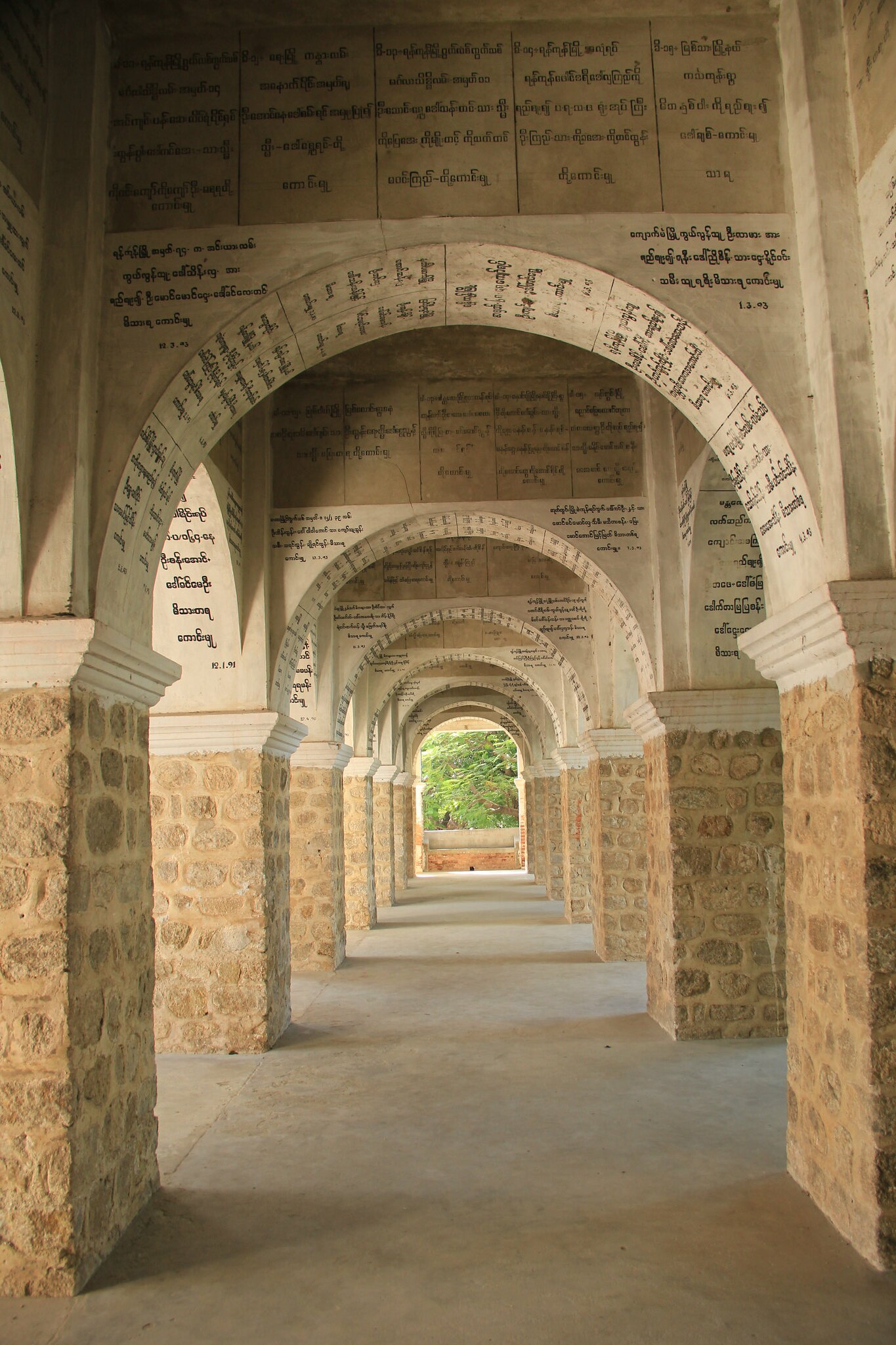 Whilst we did have a nosey in a few other pagodas and monasteries on the way up, the real star of the show was the Su Taung Pyae Pagoda.

With polished marble floors, mosaic-embedded archways and glistening gold stupas rising up towards a perfect cloud-brushed sky, this place was pretty spectacular even without the views.  But add those into the equation and you’ve got somewhere worth making a brief stop in Mandalay for. 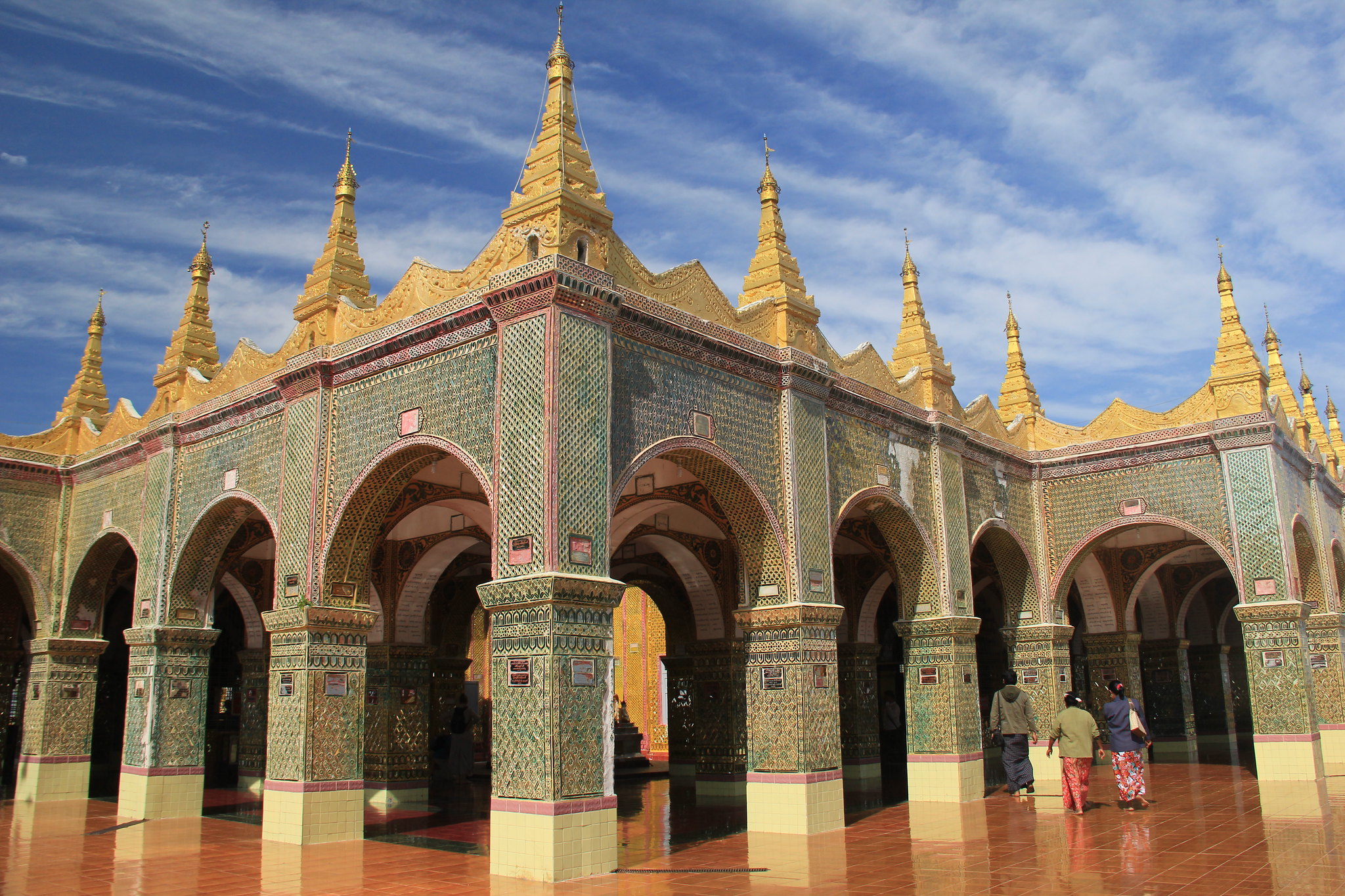 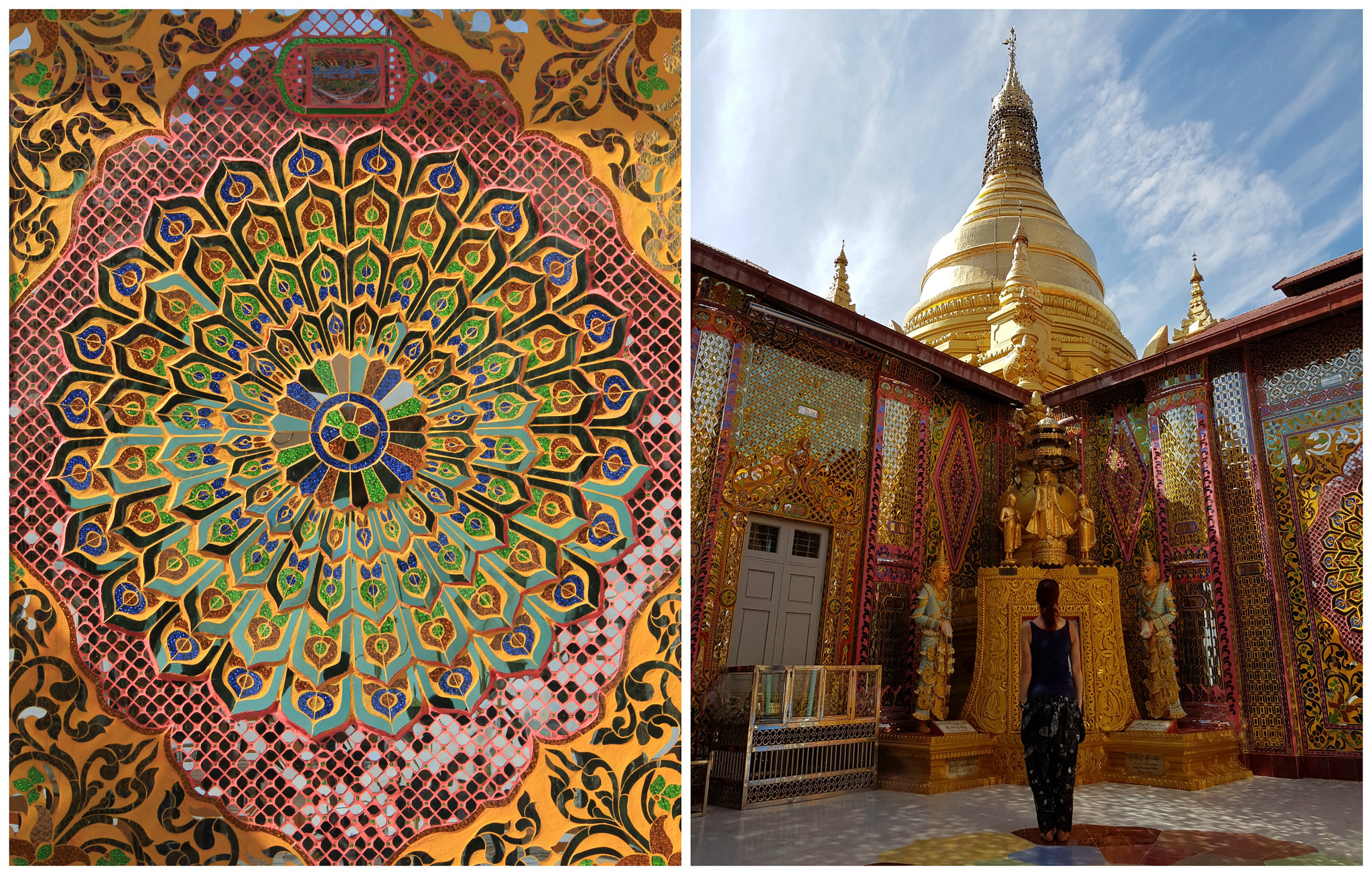 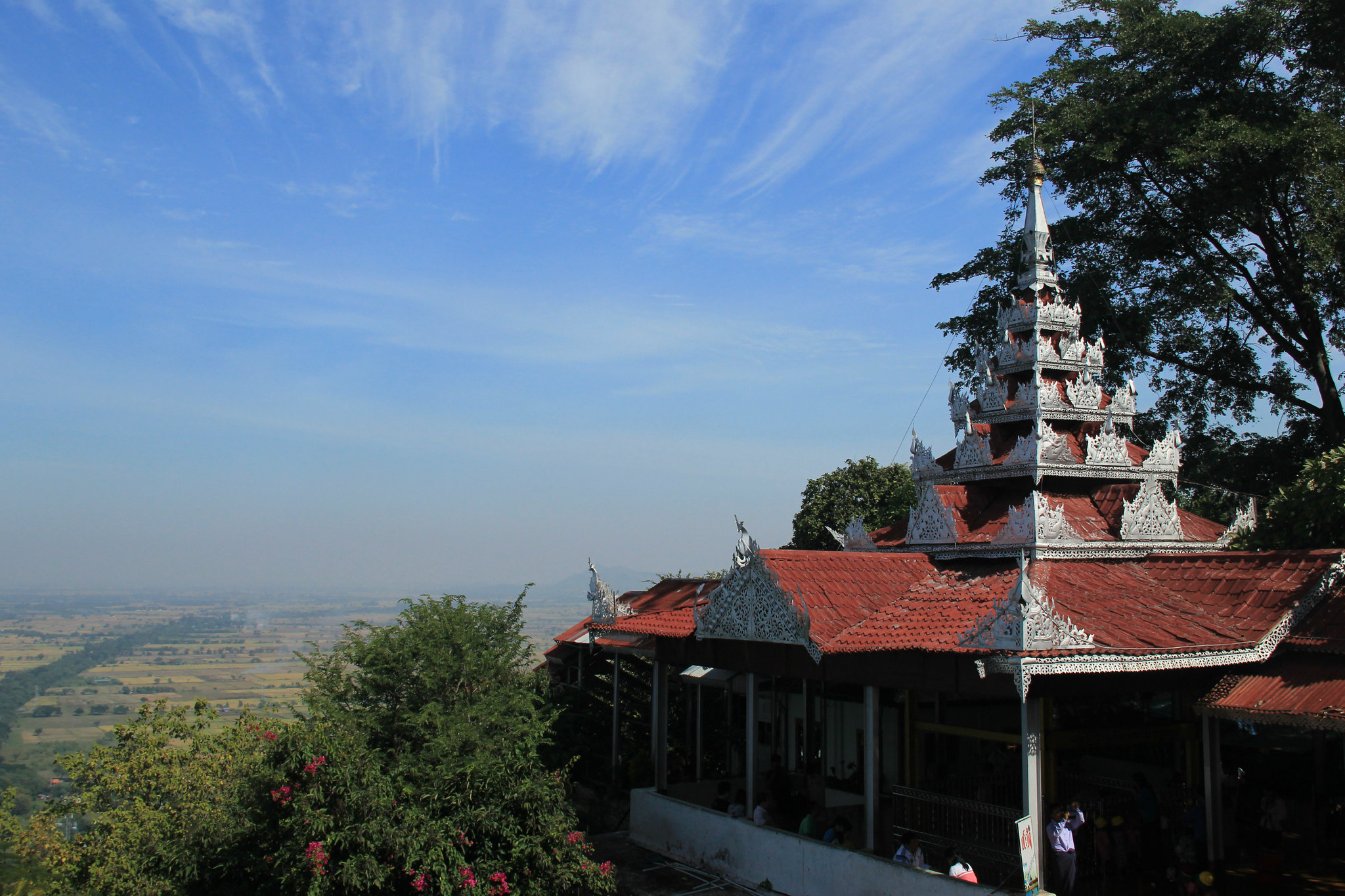 The fact that the Su Taung Pyae Pagoda – and in fact much of Mandalay Hill – is visited more by locals and pilgrims from other parts of Myanmar than foreign tourists makes the experience of wandering its grounds all the more authentic.

Mandalay often gets missed off many travellers’ itineraries, for the same reason that we contemplated skipping it.  And, truth be told, if you want to visit a big city in Myanmar, then Yangon has much more charm, and therefore a more instant appeal than its northern rival.

However Mandalay is absolutely not without its merits (Mandalay Hill is definitely one of them); it’s simply one of those places that takes a little longer to get to know.

Have you visited Mandalay?  What do you recommend doing/visiting in the city? Any tips? 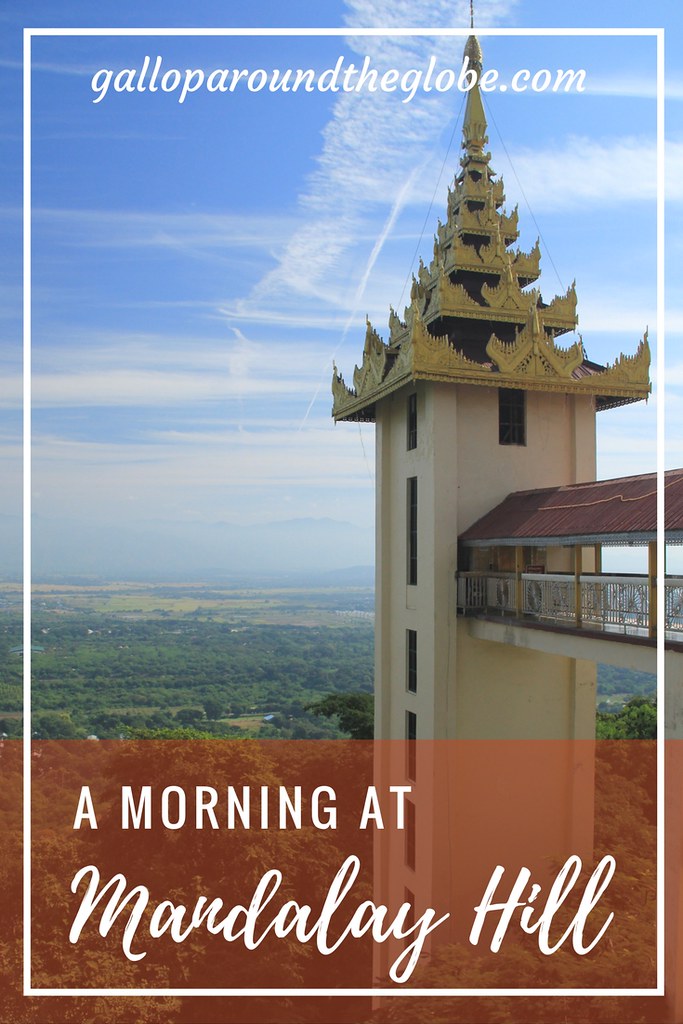 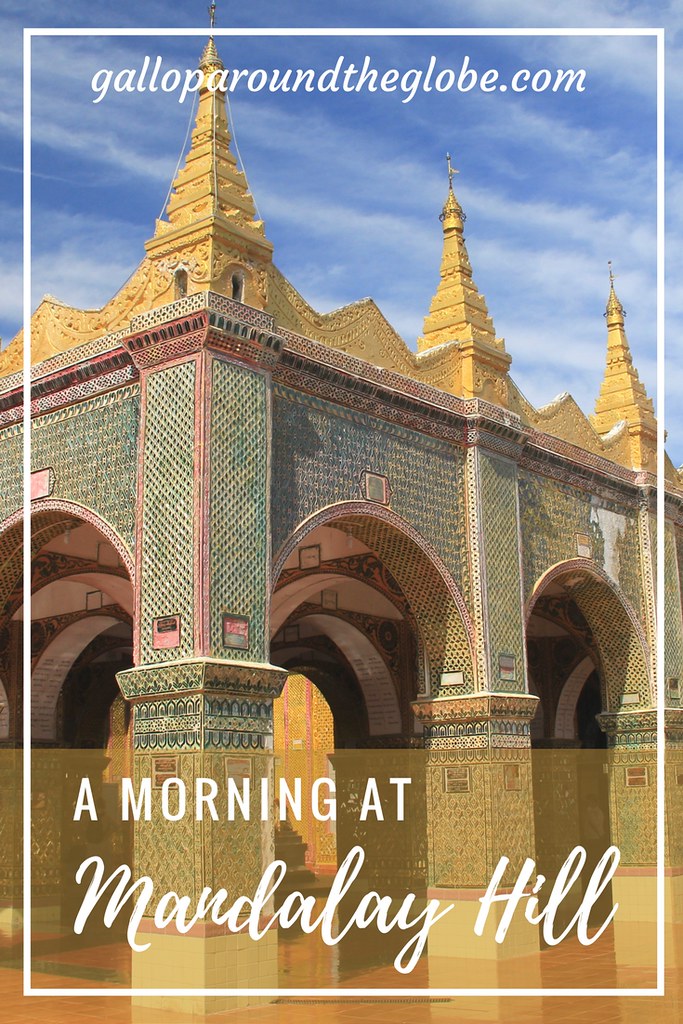 In Photos: Exploring Bagan’s Temple Interiors – Gallop Around The Globe

From Beaches to Baroque: Your Mini Guide to Panaji, Goa

After our cow incident back in Shropshire (we got

This was our starting point on the Hadrian's Wall

Last weekend @turners_travels1 and I decided to do

Well, the weather has put a dampener (excuse the p