Uncovering the Medieval and the Miniature in Besalú, Catalonia | Gallop Around The Globe

If you’ve read last week’s post you’ll know that Besalú was one of the towns in which I based myself whilst completing my three-day hike through Catalonia.  Located on the edge of the volcanic zone of La Garrotxa Nature Park and just 35 kilometres from Girona, Besalú is one of Catalonia’s best preserved medieval towns.

Once the capital of an independent state known as the County of Besalú, the town is named after an ancient castle which is believed to have stood on the site as early as the 10th century, but is now most famous for its 12th century Romanesque bridge and for having preserved a unique and valuable Jewish heritage.

It’s definitely somewhere that’s worth making a day trip to explore (it’s also only 130 kilometres (around an hour and a half by road) from Barcelona), but if you have time I’d recommend staying overnight in order to photograph the town at dawn or dusk, minus the crowds.

If you consider that I didn’t arrive into Besalú until around 5pm, spent a large chunk of the following day hiking to Esponellà, and then caught a bus to Girona at midday the day after, I probably didn’t have any more than the equivalent of one full day with which to explore the city, but Besalú is compact enough to make that a sufficient amount of time.

Here are a few of my recommendations for what to see and do during your visit.

I was lucky enough to capture this shot as I approached Besalú on my hike from Santa Pau, but if you’re not approaching the city on foot, or you’re approaching it from a different direction, don’t worry because the viewpoint is only a short walk from the tourist office, adjacent to the Pont de Besalú (bridge of Besalú).

From the tourist office, head across the car park in a southerly direction and take the road straight on that runs parallel to the river Fluvia.  When you reach a t-junction, the right hand fork is signposted “camping,” but you’ll need to turn left.  The tarmac road heads uphill.  Keep following it until you reach a right hand turn that leads off into a field and towards a farmhouse.  Around here is the brow of the hill and offers a stunning view down on to Besalú.

I’d recommend heading up here around 9 or 10am, in order to capture the city bathed in the early morning sunlight. 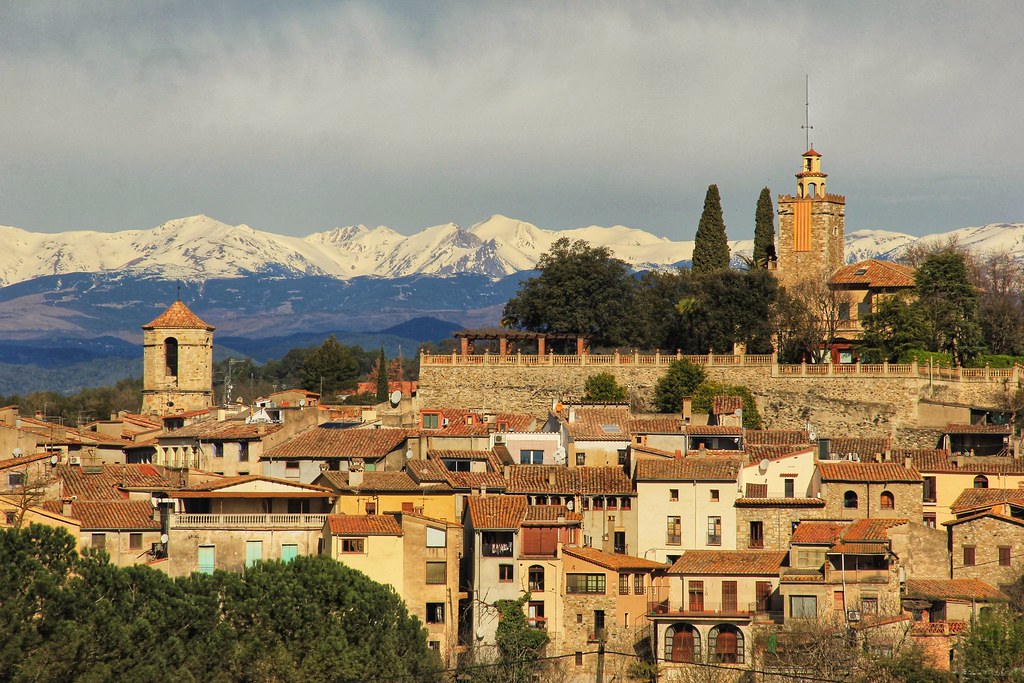 This bridge will more than likely be your introduction to the city.  And what an introduction it is.  Reminiscent of Charles Bridge in Prague if you arrive late afternoon on Easter Saturday (complete with puppeteers and musicians), but delightfully quiet during the early hours of the morning before the buses start to arrive, Pont de Besalú is the city’s instantly recognisable – and incredibly beautiful – iconic landmark.

The large, well-preserved Romanesque bridge is supported by seven arcs and two towers, and gracefully guards the entrance to the old town.  Although this particular bridge dates back to the 12th century, there’s likely been a bridge here since the time of the first Roman settlements on the shores of the river Fluvià. 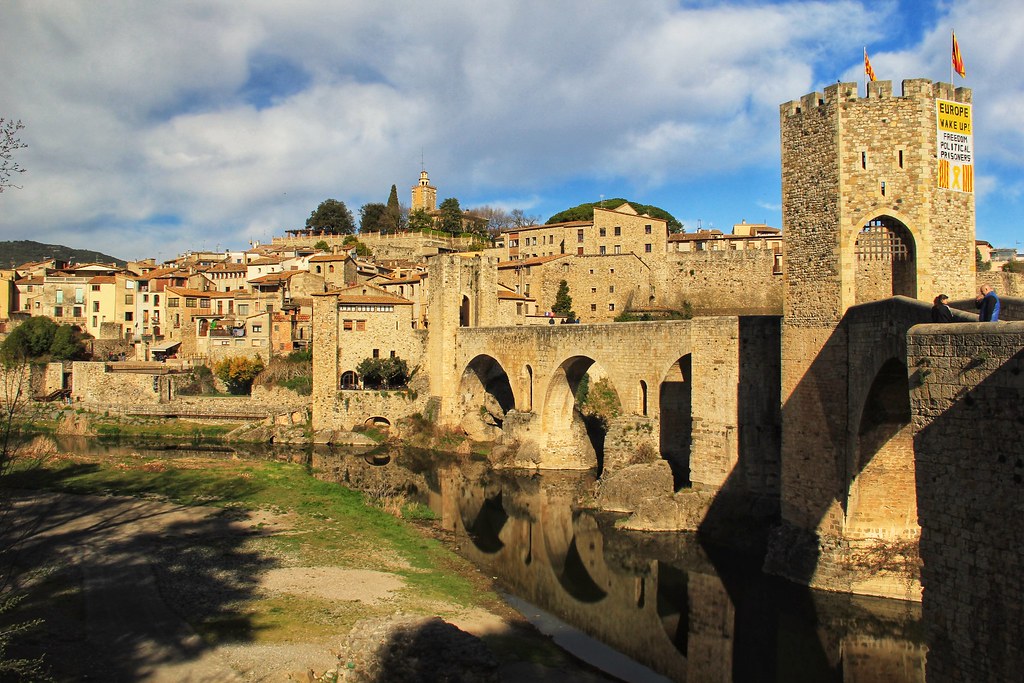 While the lighting is better a bit later on in the morning (around 10 or 11am), the only time of day you’ll find the bridge devoid of people is at 8 or 9am, just as the city is waking up and everyone is still at home or in their hotels eating breakfast. 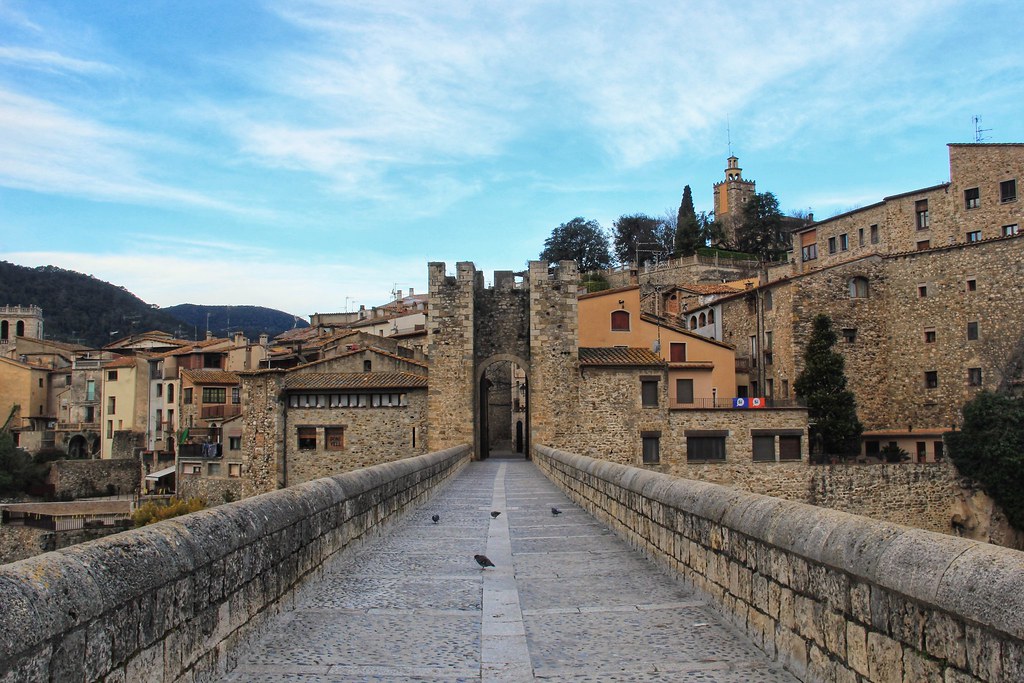 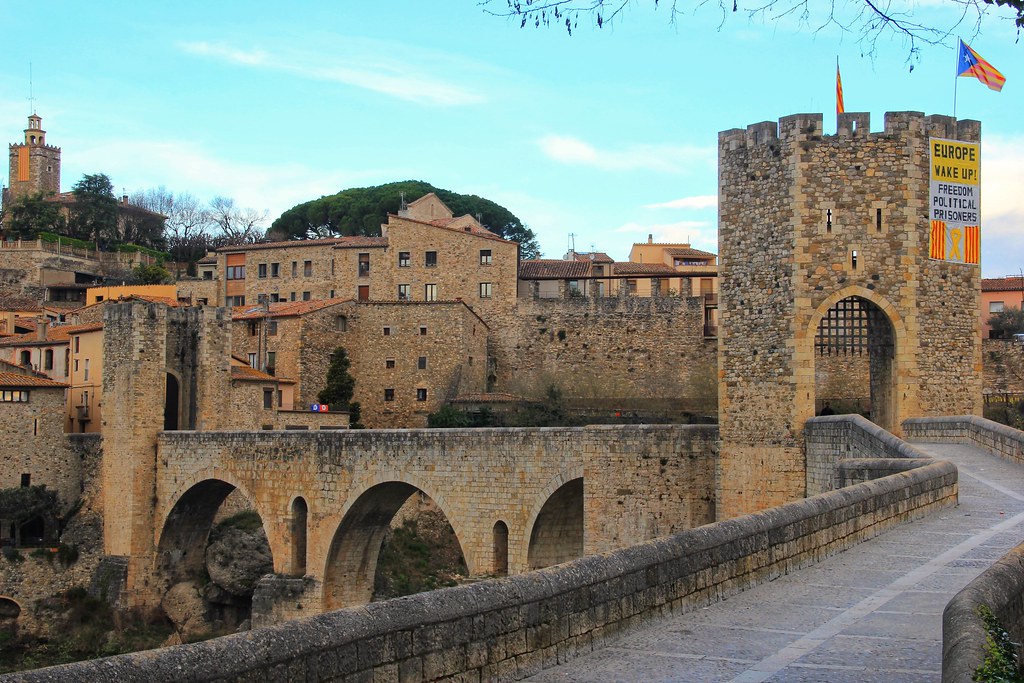 Breakfast at my hotel wasn’t served until 9am, so on my second day in the city I decided to have an early morning photo-taking wander, in order to capture the beauty of Besalú’s medieval streets – minus the people I’d been sharing them with the evening before.

It was a delightful, peaceful venture and one that I shared only with a cat, a few pigeons, and the odd lone resident who was perhaps on their way to the bakery to pick up some freshly baked bread or a couple of warm, flaky croissants. 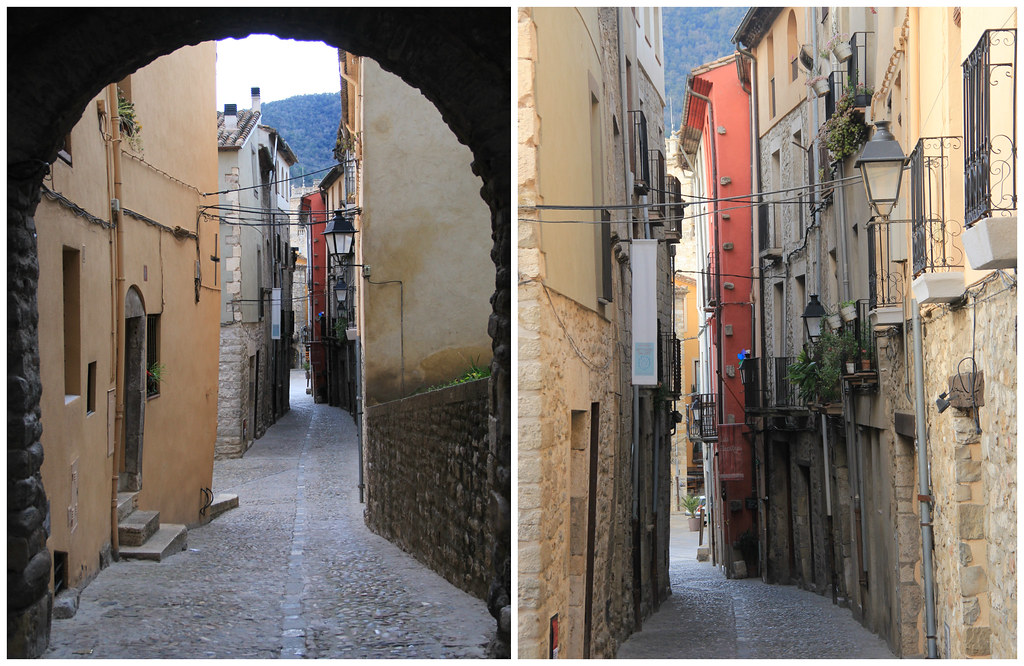 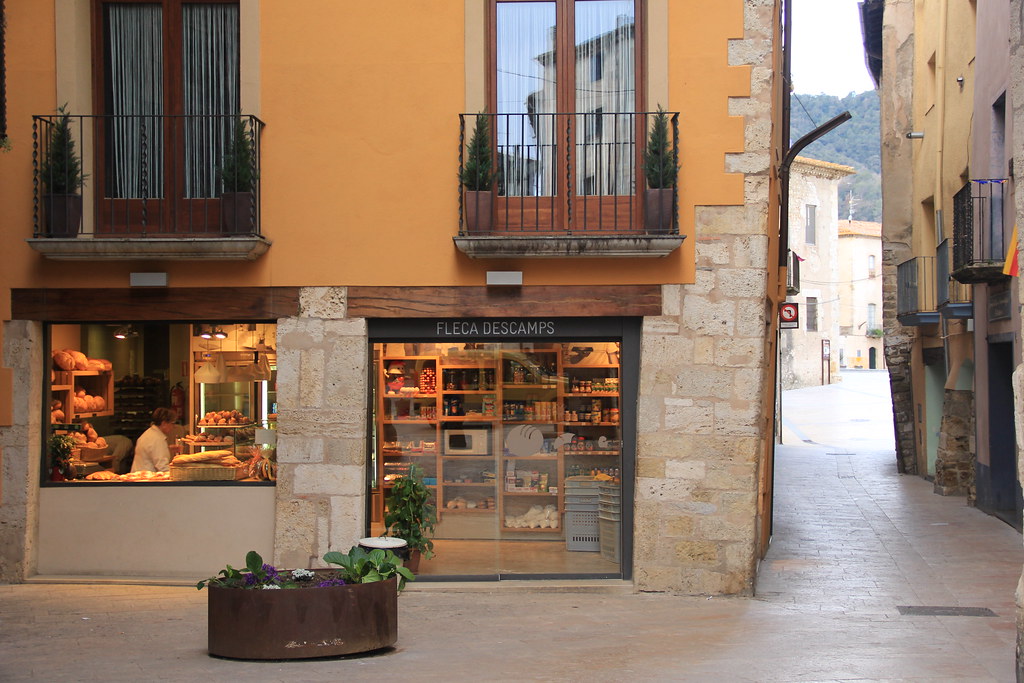 The hotel is so-named because it’s built next to Besalú’s three stone arches, and that’s what you’re here to see.  Unfortunately I can find zero information online about the history of these arches, but they appear to be original and are a unique architectural feature in the city.  I’m guessing they may once have formed part of the old city walls.

If you like cats, you’ll always find a few milling around this particular part of town. 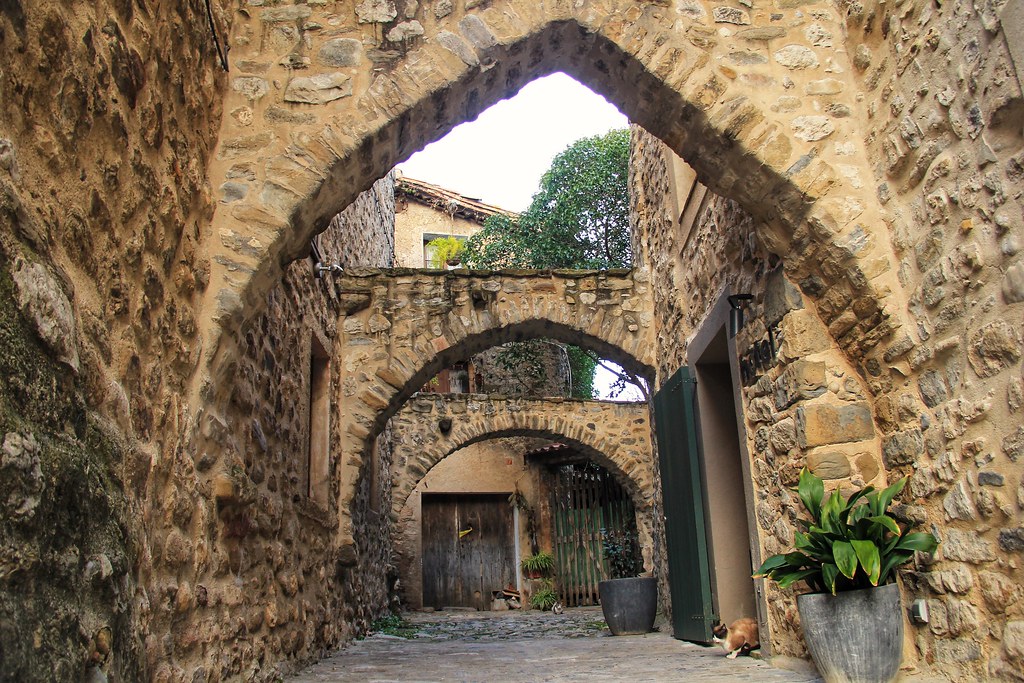 Very quickly you’ll realise that all roads lead to Plaça de la Llibertat; Besalú’s old town is tiny!  The square is flanked by a number of notable historic buildings, as well as a handful of shops, cafes and restaurants.  It’s a lovely place in which to take some time out and simply watch the world go by. 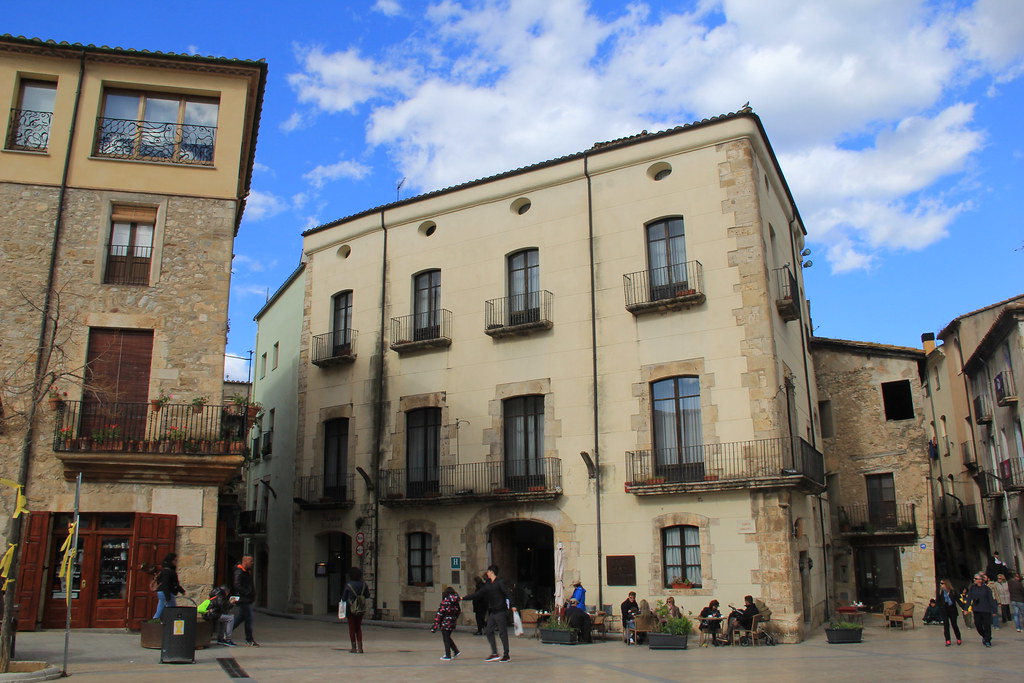 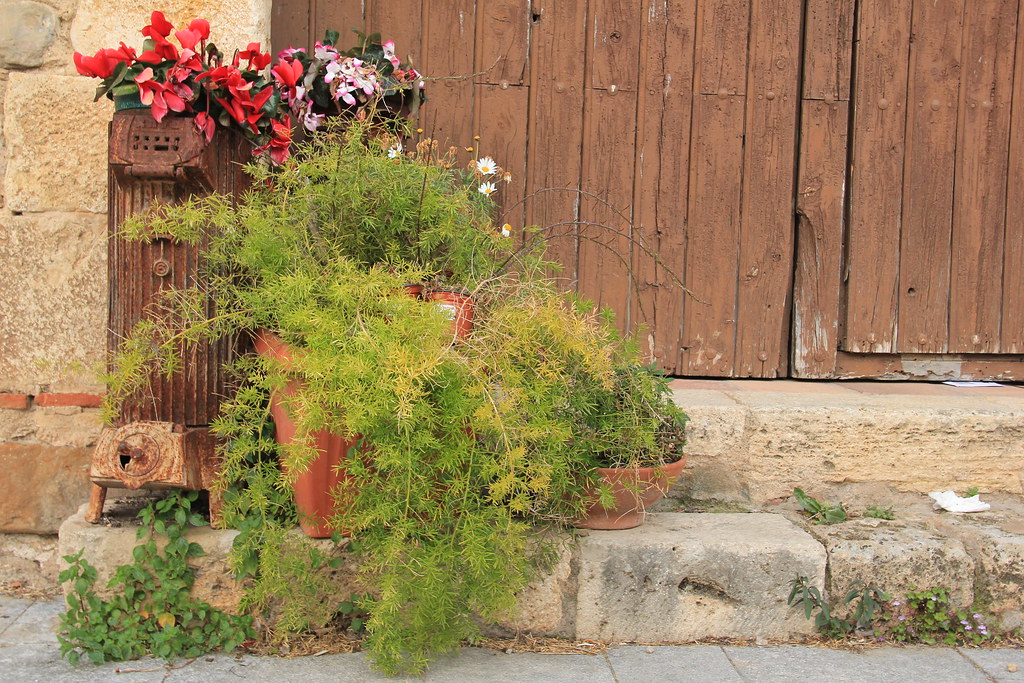 Overlooking Plaça de la Llibertat, this Benedictine monastery was originally founded in 977 by Count Bisbe Miró and then later restored in the 12th century – the result of which is still visible today. 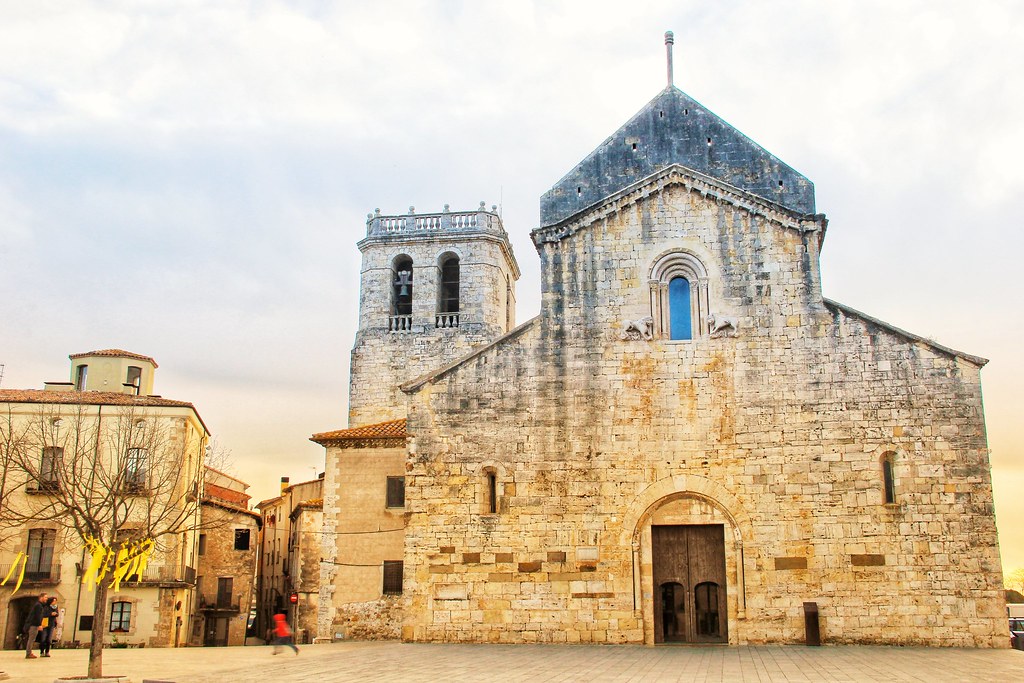 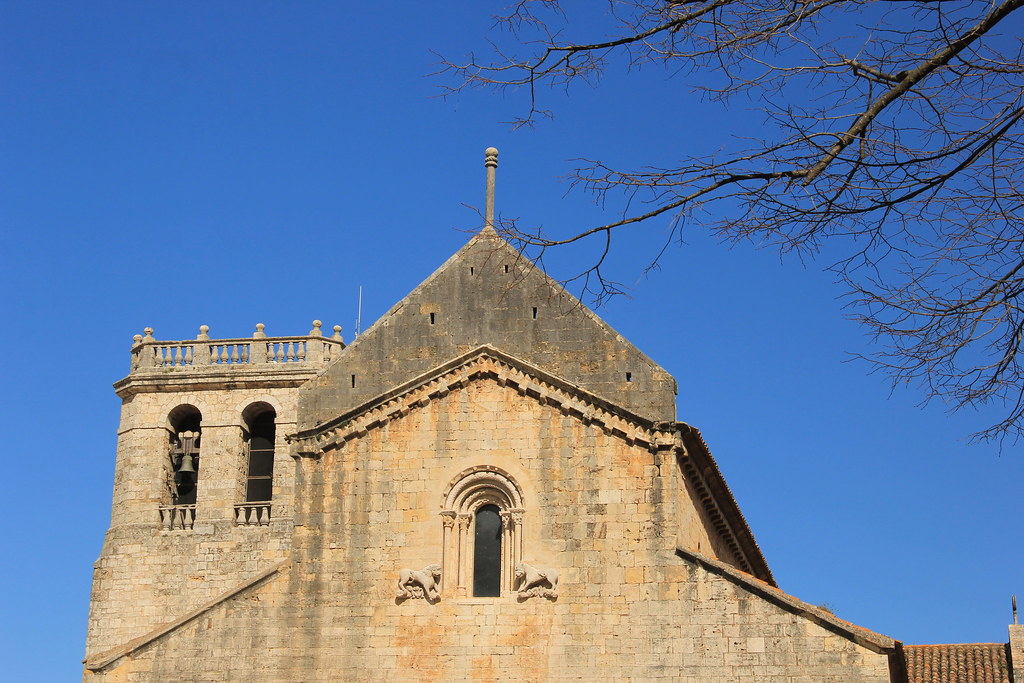 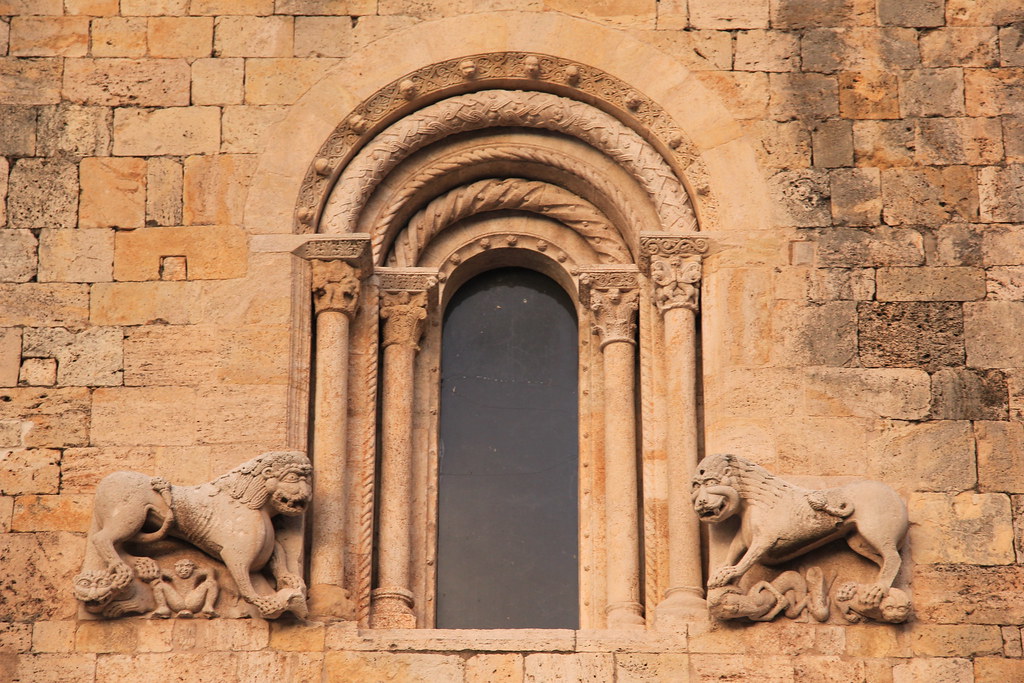 #7 Feed your curiosity and wonder at the Museum of Miniatures

This is possibly one of the most fascinating, bizarre and unusual museums I have ever set foot inside.

Opened in 2007 by artist Luis Carraras, Besalú’s Micromundi (Museum of Miniatures) features a collection of miniature scenes, from 19th century shops, to a tightrope walking ant – most of which have to be viewed through a microscope or magnifying glass.  Although the museum is small, it’s totally and utterly worth the €3 entry fee.

As you can imagine, photography is rather challenging in here (but it is permitted without flash), so my photographs unfortunately do not do these masterpieces justice.  But take my word for it that one of the most incredible miniature scenes was a camel caravan that had been painstakingly created inside the eye of a needle! 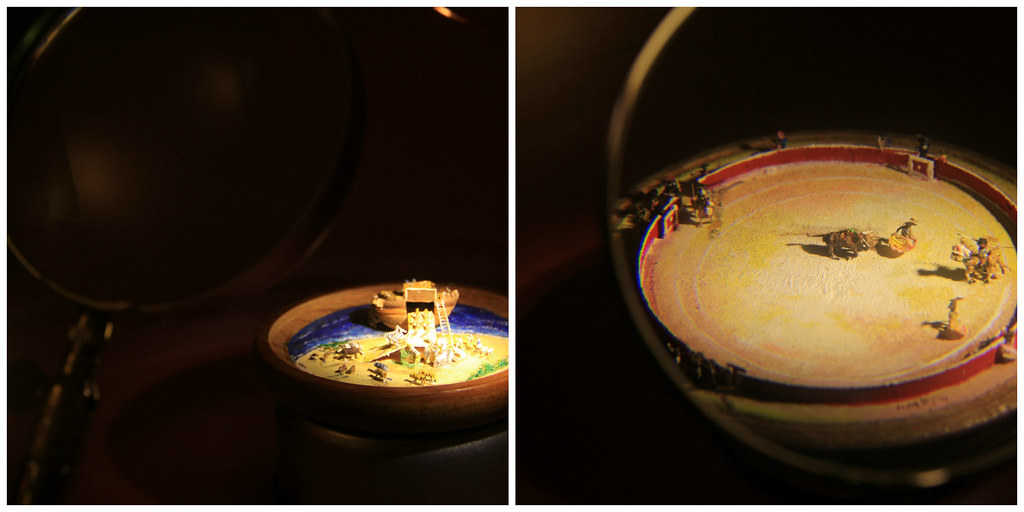 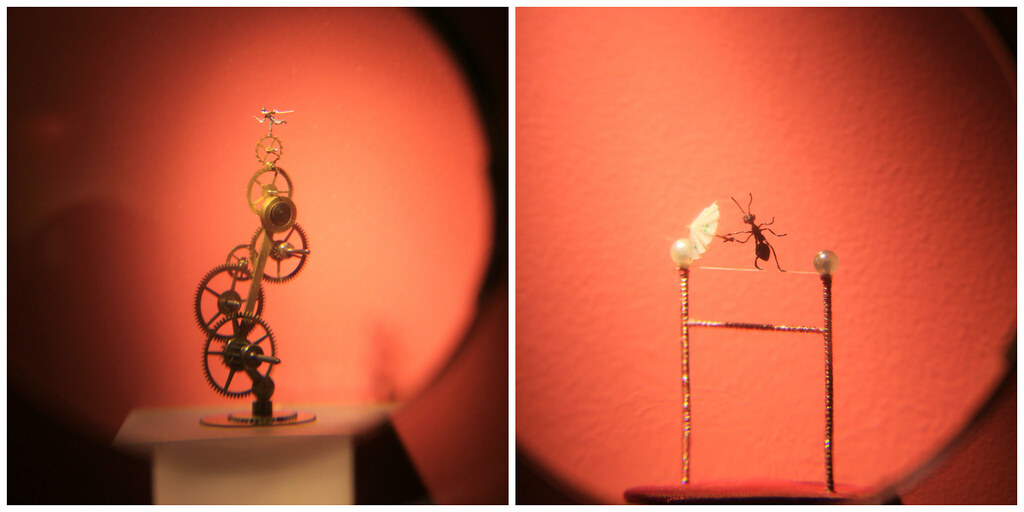 There seems to be some kind of chair theme going on in Besalú. I spotted the chairs below on a wall just around the corner from my hotel (you can just about see their position on the wall in the photograph on the left).  Upon closer inspection a plaque on the wall revealed that this particular sculpture is entitled ‘Cadires del Carrer Rocafort’ (“Chairs of Carrer Rocafort”).

Created as part of an artistic exchange organised in Summer 1994 by the Italian region of Frosinone and the Girona Provincial Council, the chairs are said to symbolise the difficulties humanity has in accomplishing its aims and resolving the problems it has to confront. 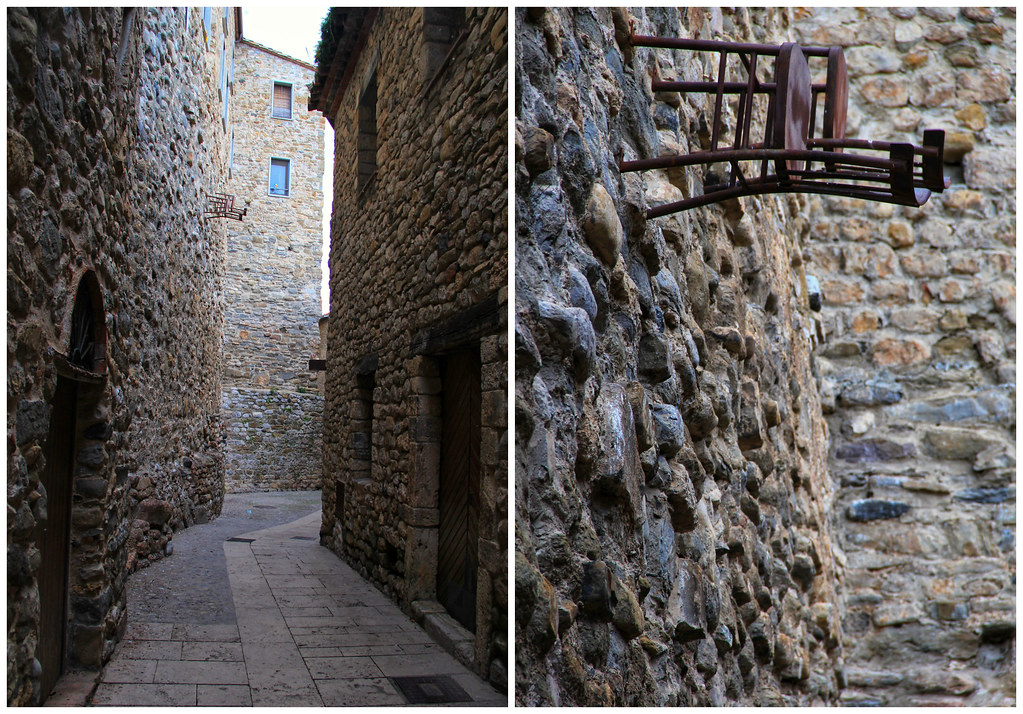 The chair in the photograph below was on the exterior of the Espaikd Art Gallery. The other two pieces pictured can be found inside. 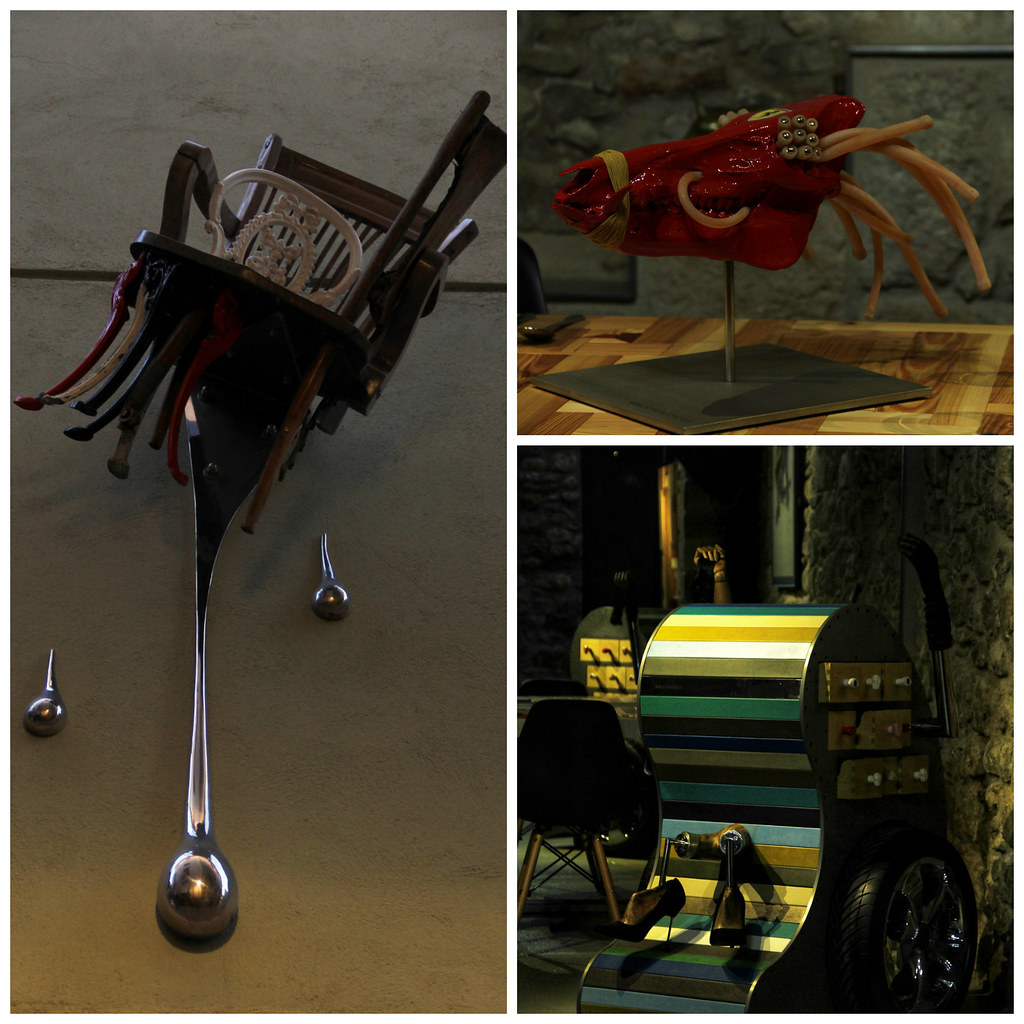 And lastly, this is the Silla por la Paz (Chair for Peace), which can be found down on the banks of the River Fluvia, not far from the other sculpture pictured here.  Created by Colombian artist, Duván López, the chair gives the illusion of being three-dimensional when viewed from certain angles , when in fact it’s actually a two-dimensional structure.

It’s not possible to follow the walls around the entirety of Besalú’s old town, but you can walk a large chunk of them, and it’s a lovely way to get acquainted with Besalu’s historic centre.

On the southern edge of the walls you’ll pass Portal del Horts (Mill Gate), which is one of the best conserved parts of Besalú’s 14th century fortifications, and is so named because it was located near to the irrigation channel that fed the mills. 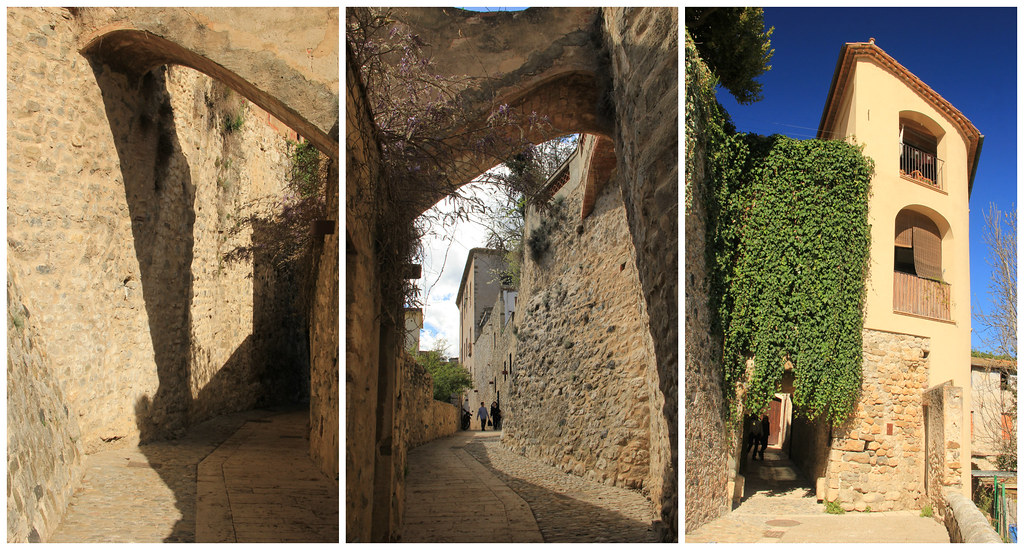 #10 Book a guided tour of the mikveh (sacred Jewish baths)

According to the history books a significant Jewish community arrived in Besalú around the 9th century and lived peacefully alongside the Christians for many years.  Consequently, evidence of this coexistence is still present today, and includes excavations of the remains of a medieval synagogue, as well as a well-preserved mikveh (a type of bath used in religious ceremonies) beneath it.  The mikveh dates back to the 12th century and is the oldest of its kind and one of only five in Spain.

Currently the only way to sneak a peak inside the mikveh is to book a guided tour through the tourist office.  However, the guided tour will also provide you with lots of invaluable information about the history of Judaism in the city. 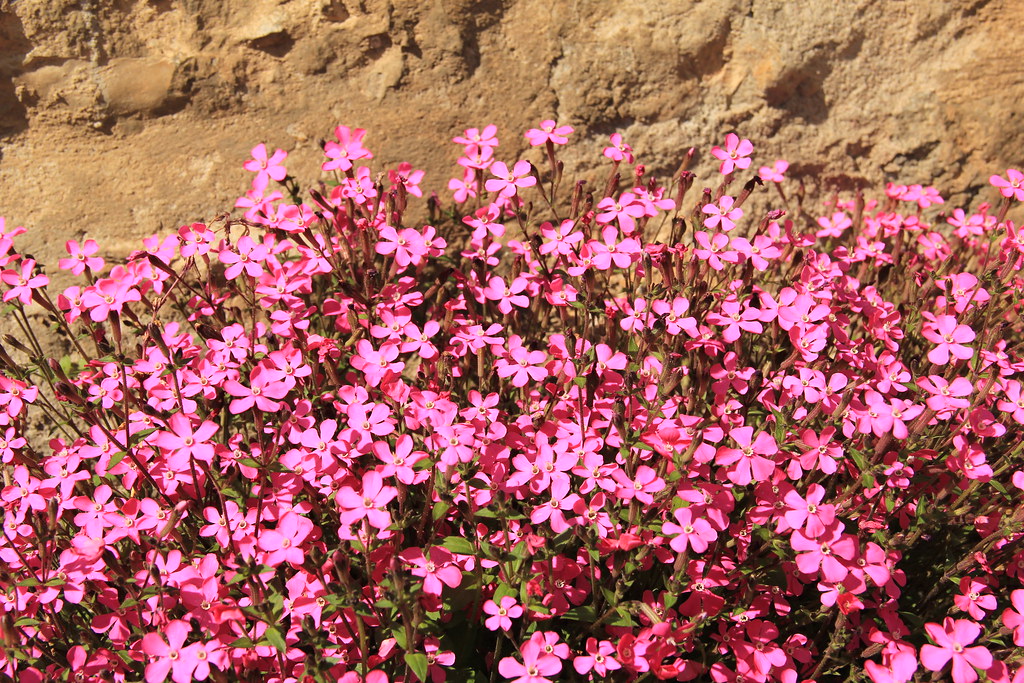 I stayed at Casa Marcial, a beautiful, well-maintained hotel just minutes from Besalú’s old bridge and the Plaça de la Llibertat. I was welcomed with a smile by a member of their staff who spoke excellent English and seemed genuinely interested to learn about all the hiking I’d done that day.  My room was amazing, and was the size of a small apartment with five windows overlooking Besalú”s medieval streets.

Breakfast (which was included in my room price) was a veritable feast of breads, meats, cheeses, cakes, pastries, cereals, dried fruit and nuts, yoghurt, fresh fruit, freshly squeezed juices, teas and coffee (the posh stuff in pods nonetheless!).  The dining area overlooks the hotel’s sunny garden, with floor to ceiling windows on one side, making it a lovely place to linger for a while. 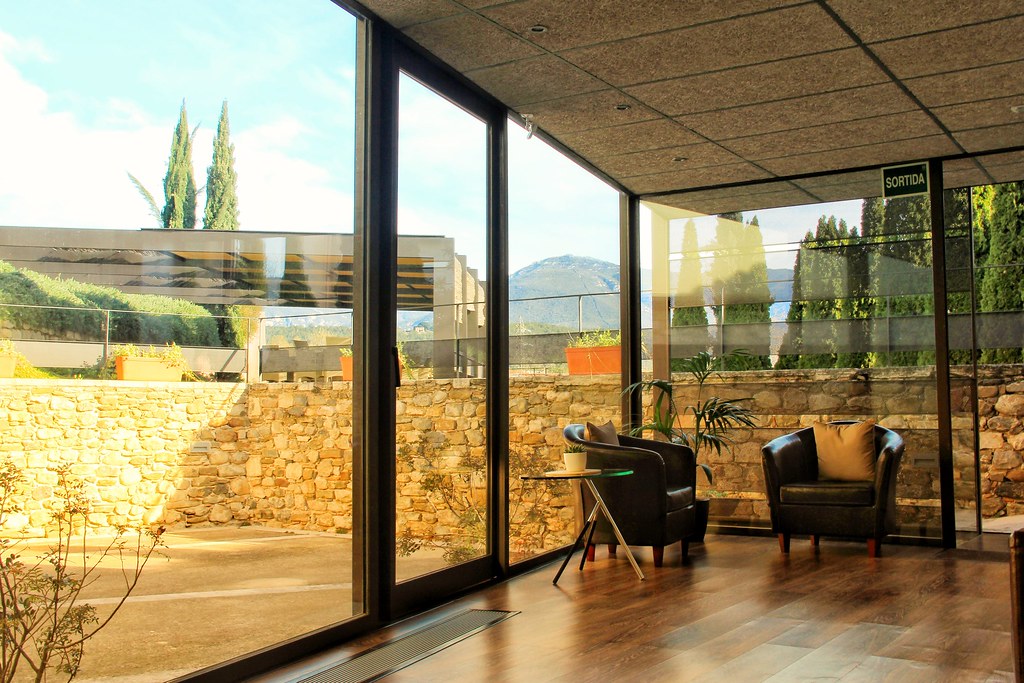 You can check rates and availability at Casa Marcial here.  Or alternatively you can search all accommodation options in Besalú below.

Getting to and from Besalú

I arrived on foot from Santa Pau but left by public bus to Girona.  The staff at the tourist information office in Besalú are very helpful, but you can also check timetables online at http://www.teisa-bus.com.  The buses were running every couple of hours to Girona even on Easter Sunday, so you should have no problem getting around the area relatively cheaply.

And here are some pretty images for your Pinterest boards 🙂 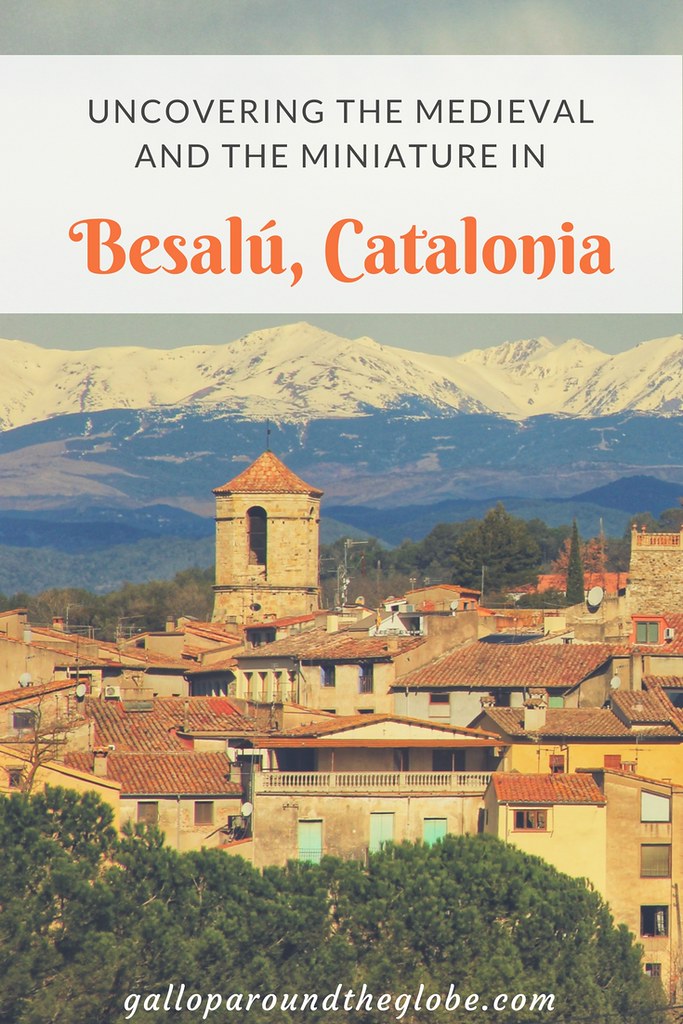 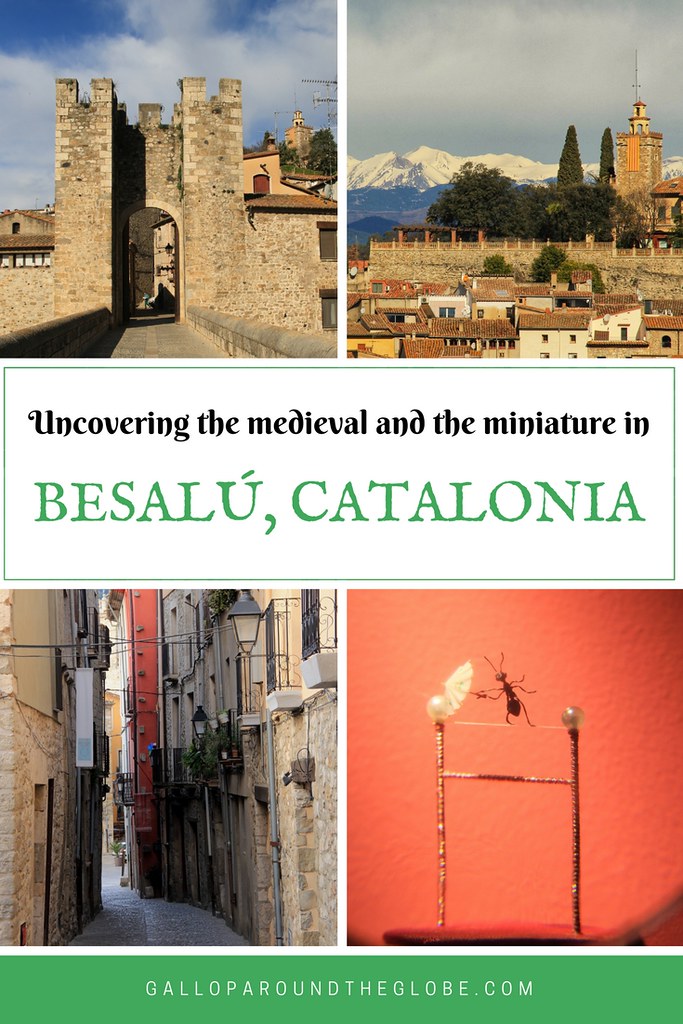 Castles, Canyons and Coastlines: A 7-day Albania Itinerary by Car

The Wonder of New Discoveries and Intrepid Adventures: A Solo Hiking Trip Through Catalonia | Gallop Around The Globe