If you’ve read last week’s post about my fantastic weekend in Vilnius, you’ll know that one of my favourite parts of Lithuania’s capital city was the quirky bohemian neighbourhood of Užupis.  But unlike, say, Psirri in Athens, Montmatre in Paris, or San Blas in Cusco (all well-known districts of famous cities that are favoured by the alternative crowd), Užupis has actually declared itself an independent republic.

It has its own flag (or rather, four – one for each season), currency, president, cabinet of ministers, a constitution (translated into 23 different languages and engraved on to plaques), an anthem, and an 11-man-strong army.

Where is the Republic of Užupis located?

Užupis means “the other side of the river” in Lithuanian, due to its location on the opposite side of the Vilnia River to Vilnius’ Old Town.  It takes approximately 10 minutes to walk to the centre of Užupis from either Stikliu Street (the heart of the old Jewish Quarter) or Cathedral Square.

Užupis can be accessed via one of seven bridges across the river.

How did the Republic of Užupis come to be?

As far back as the 16th century, when the first bridges across the river were built, the district’s inhabitants were mostly Jewish.  Considering that 95% of Vilnius’ Jews were killed during the Holocaust (1941-1945), the area became neglected and houses were left abandoned.  I guess people were more concerned with the city’s Old Town than they were with that little patch of land (approx 148 acres) on the other side of the river.

Abandoned, derelict buildings (many without utilities) were later occupied by homeless individuals and by prostitutes.  Until Lithuania’s declaration of independence in 1990, Užupis was one of the most run-down parts of the city.

But as is often the way (take a look at the ruin bars of Budapest), artists are attracted to the beauty of decay.

Over the next seven years the area grew into a popular haunt for Vilnius’ creative crowd.  Artists began to gather here and to set up shops and galleries in which to exhibit their work.  As house prices were much cheaper in this part of the city,  they also began to take up residency in the neighbourhood’s neglected old buildings.  Since declaring its independence in 1997 Užupis has developed into one of Vilnius’ most desirable districts.  But at the same time it has retained its character, creativity and quirkiness.

What should I see and do in the Republic of Užupis?

Check out the constitution on Paupio Street

To get an idea of what this self-proclaimed republic is all about, you should firstly have a read of the Constitution of the Republic of Užupis, which is engraved on to 23 individual plaques (in 23 different languages) along a wall at one end of Paupio Street. 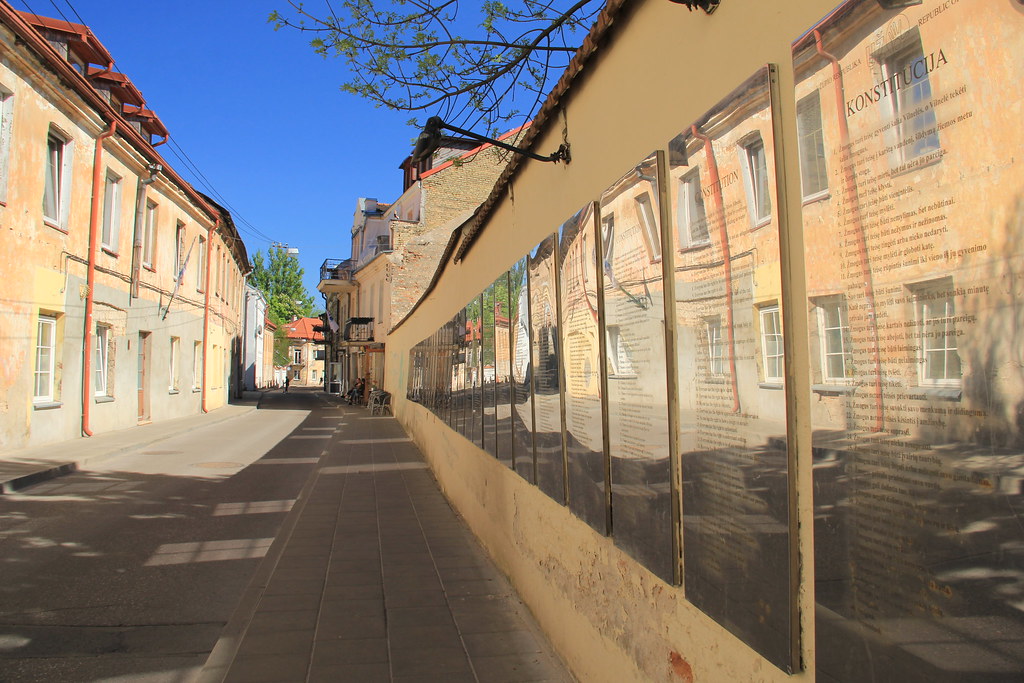 It was written by two men – Romas Lileikis, the President, and Thomas Chepaitis, the Minister of Foreign Affairs. One was a dog lover and the other a cat lover – and that’s still clear to see in the following principles of the constitution:

However, they were also passionate advocates of the life that a post-Soviet world offered.  They believed that everyone should have access to equal rights and opportunities, but at the same time they recognised individuality and freedom of choice. 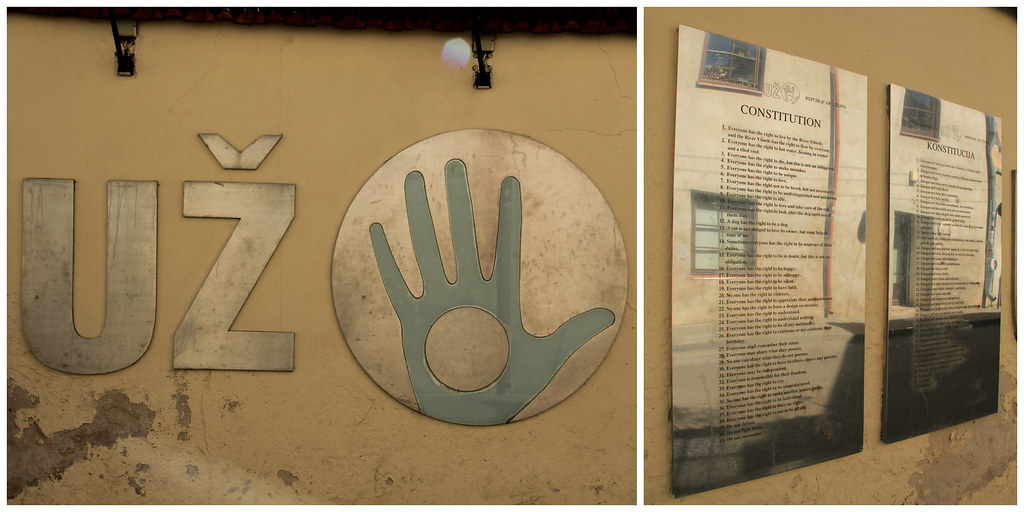 Meet the ambassador of Užupis in Keistoteka Bookstore

Bizarrely but unsurprisingly, the ambassador of Užupis is not a human being, but rather a cat.  And an overweight, ginger, camera-shy one at that.  You’ll find Keistoteka pretty much opposite the constitution of Užupis, its entrance marked by a colourful hand-painted sign and an old grammaphone case full of books (oh, and a photo of the ambassador himself). 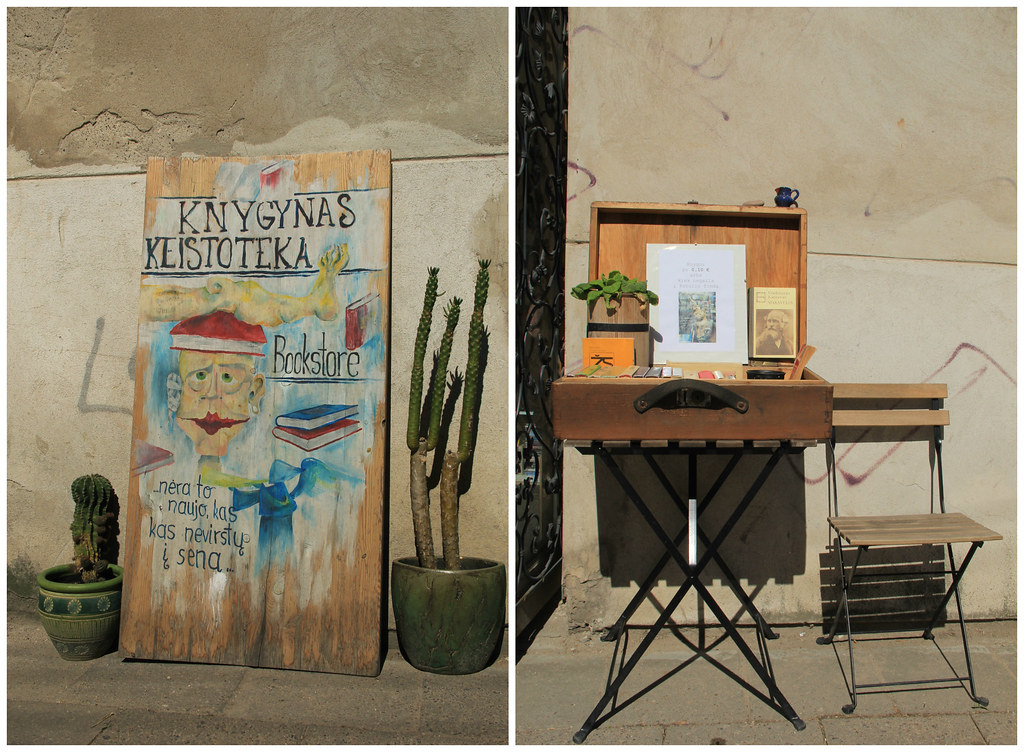 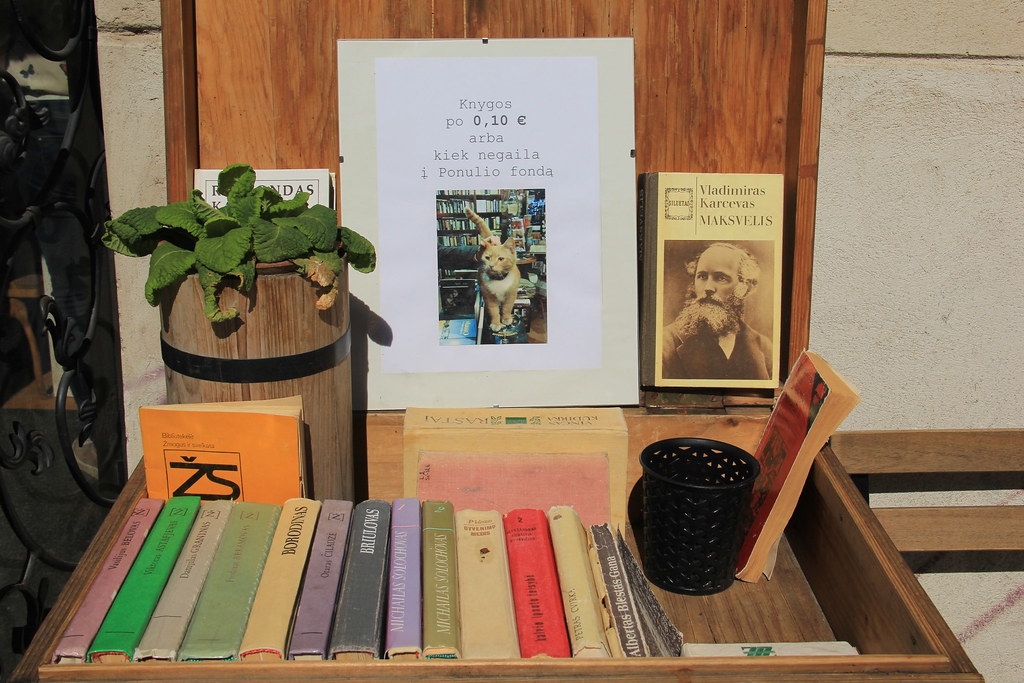 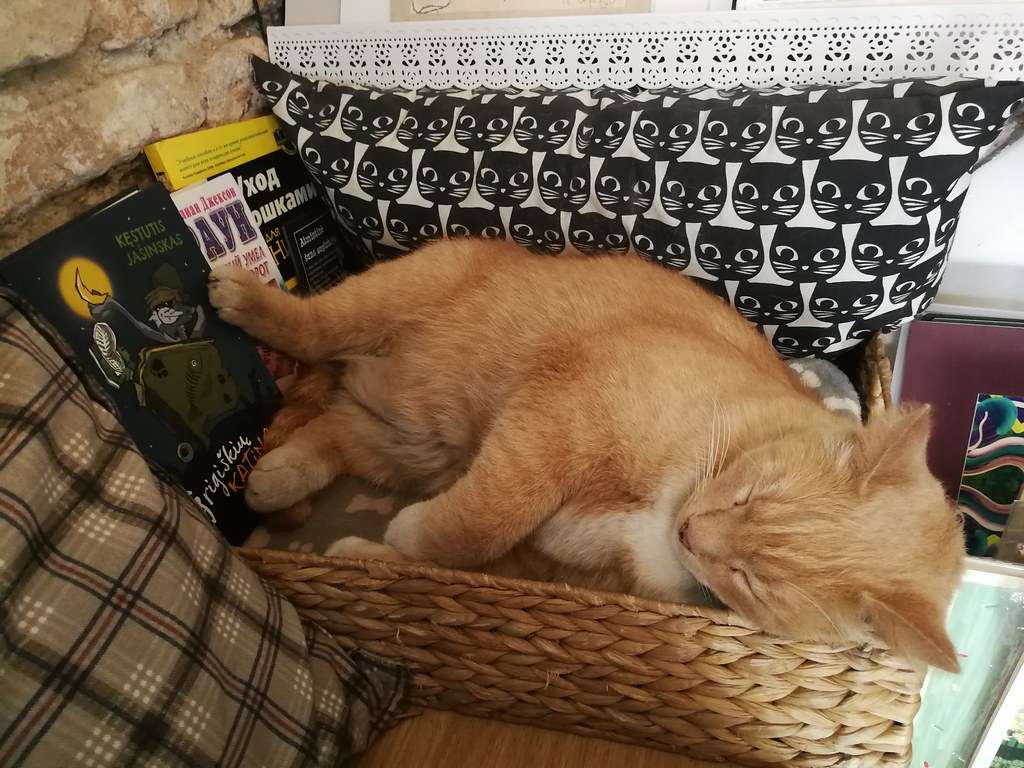 As well as being able to fuss (if he’ll let you!) and photograph the cat, you can also browse Keistoteka’s collection of books and gifts (including a postcard-sized copy of the constitution itself).

Get a stamp in your passport at the information centre

Even if you don’t want a stamp in your passport (but, quite frankly, why wouldn’t you?), the information centre is a fantastic place to learn a little bit about the republic and have a look at some old photos and memorabilia.  The enthusiastic young girl who works there (and who is also a resident of Užupis) will happily talk you through the relevance and importance of all the artefacts on display there. 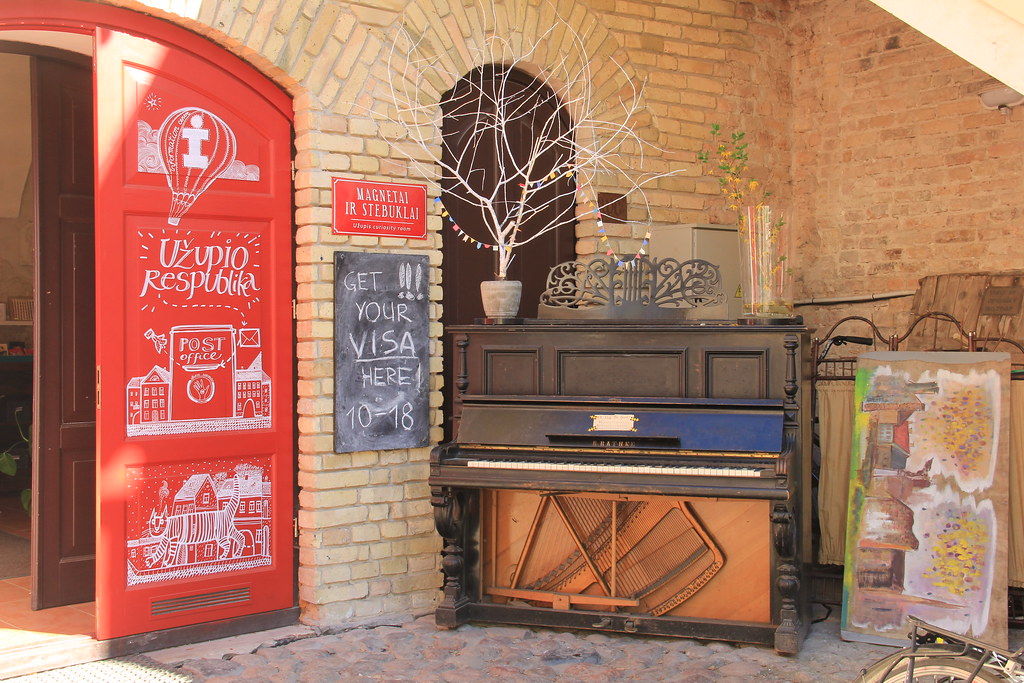 She’ll also show you the local currency (Uzas), which can only be spent on one day each year – April Fool’s Day.  Known as Užupis’ National Day, April the 1st is the anniversary of the date they declared themselves an independent republic. 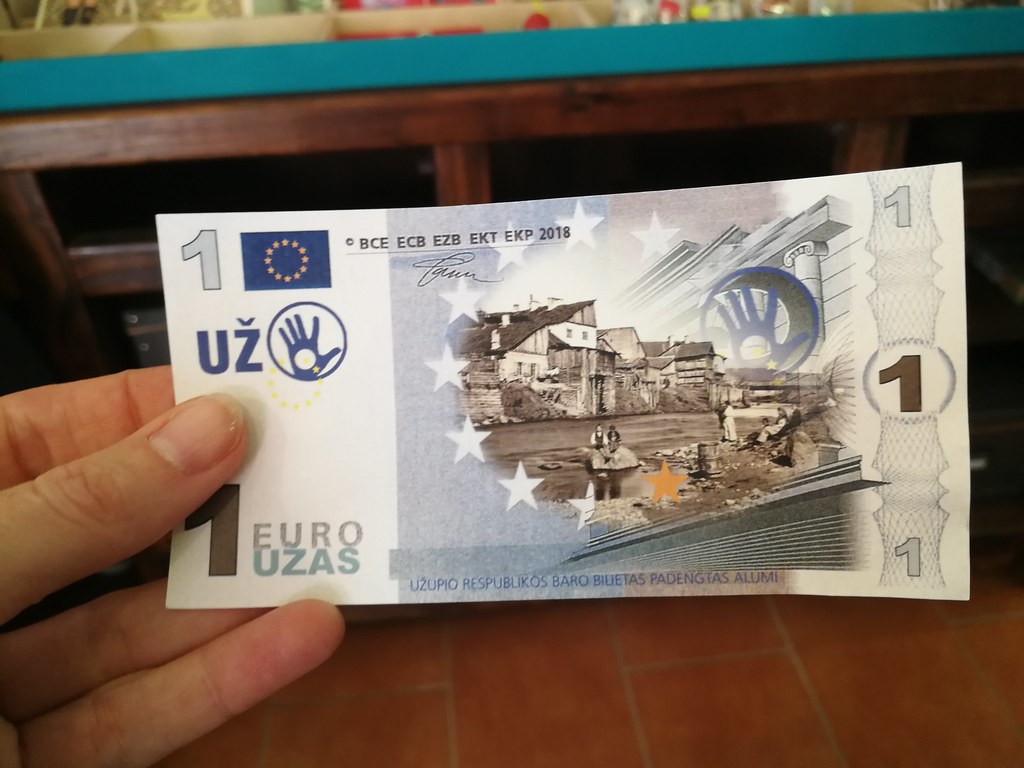 The ‘gentleman’ in the photo below is actually Artūras Zuokas, a resident of Užupis and former mayor of Vilnius who regularly takes part in the Republic’s events.  Anywhere else it would be ridiculously absurd for a former mayor to be seen wearing such attire, whereas in Užupis this is perfectly normal.

Hang out in Tibet Square

Adorned with colourful Tibetan prayer flags and shaded by tall trees, Tibet Square is a great little spot in which to take a break and read a book from the Little Free Library – also located here. 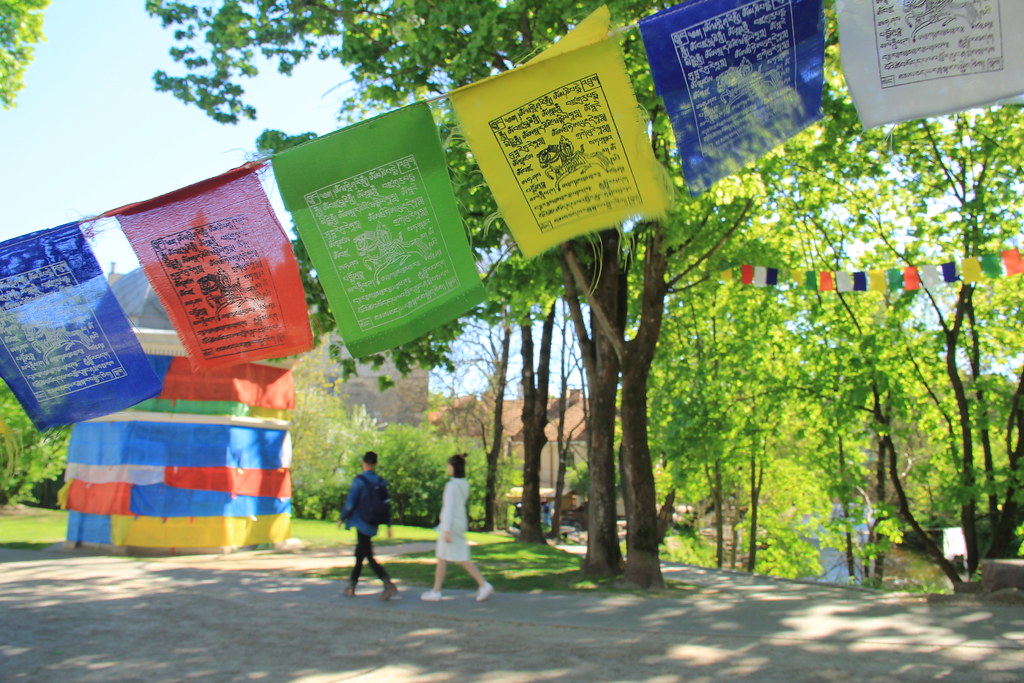 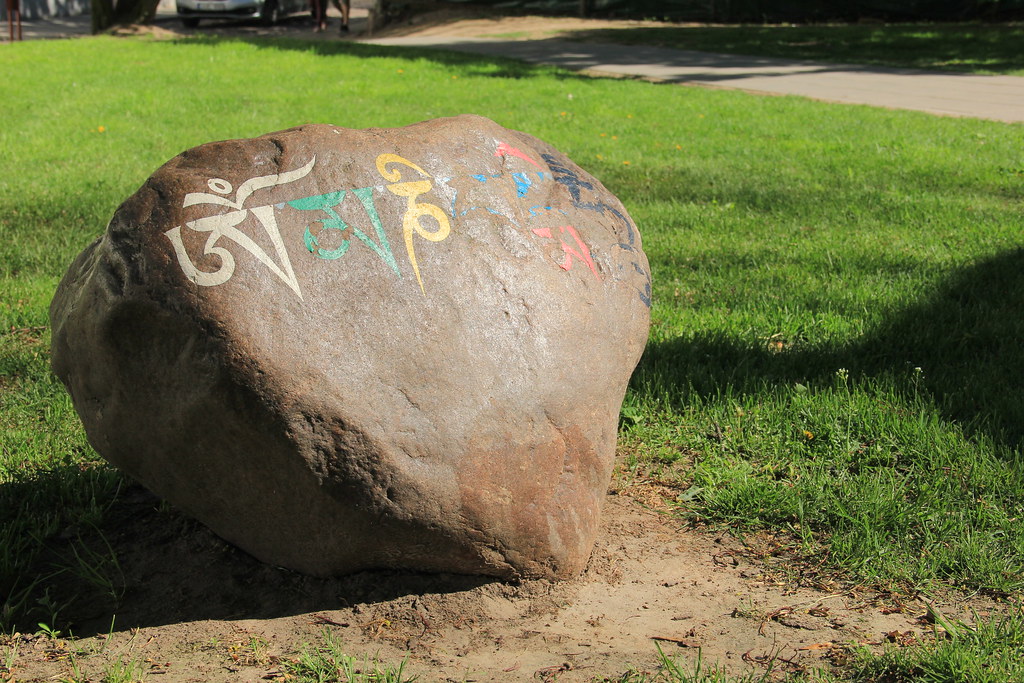 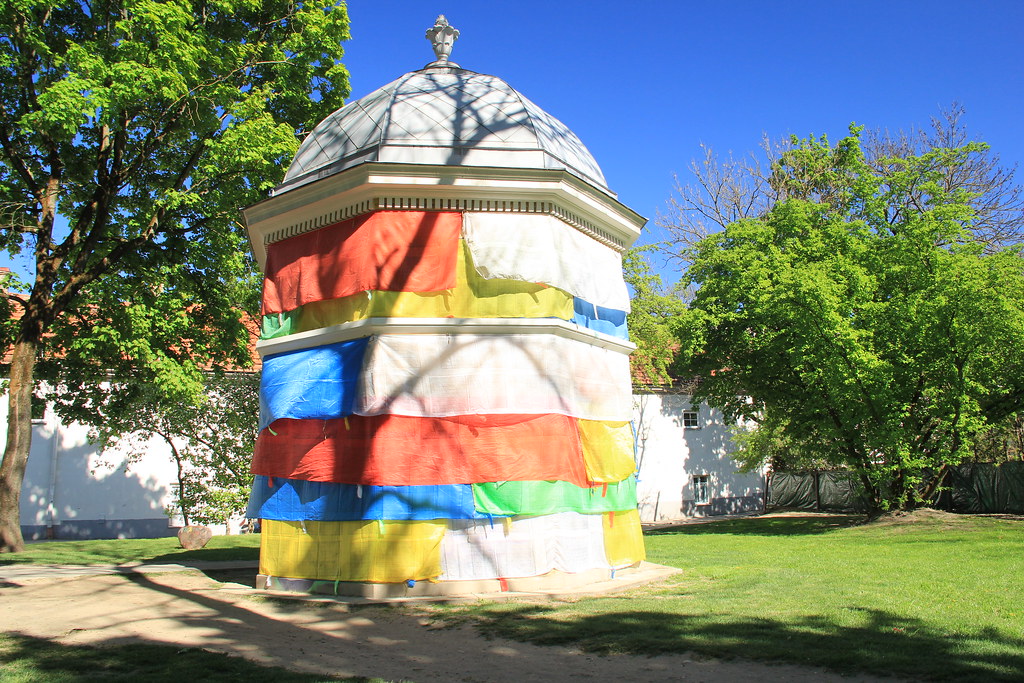 If one thing’s certain in Užupis it’s that the Republic doesn’t take itself too seriously.  The art work you’ll find scattered around the neighbourhood is just one example of this.

Whilst there’s a strong musical theme (I lost count of the number of old pianos I caught sight of), pretty much anything goes here.  From a backpacking Jesus to an old rocking horse who’s lost his rocker, there’s enough queer and quirky pieces to delight and amuse even the most sombre of individuals. 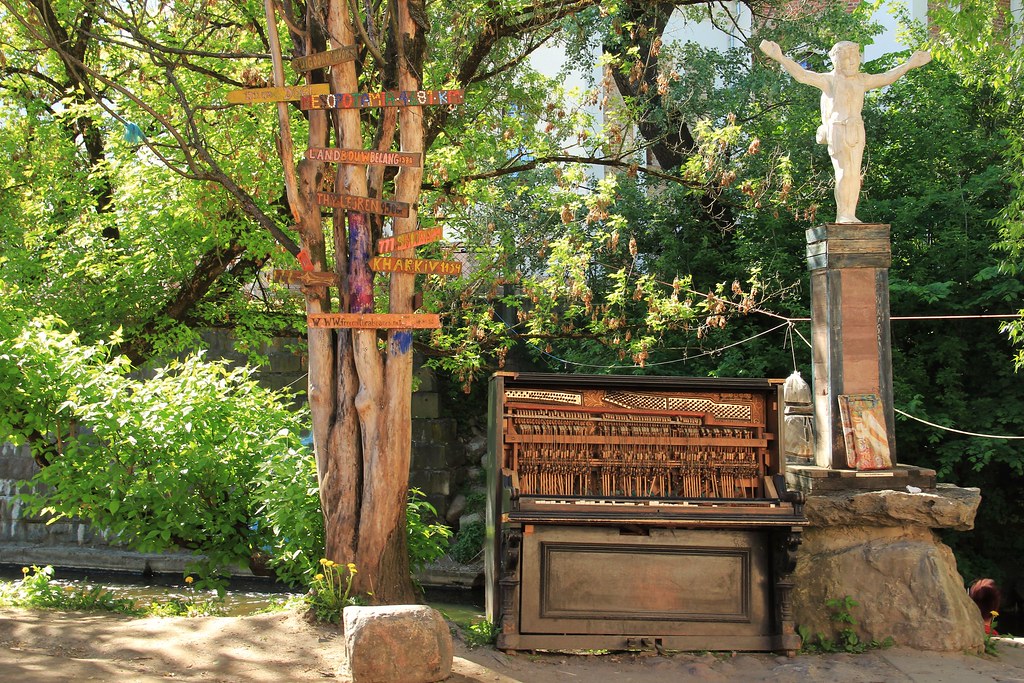 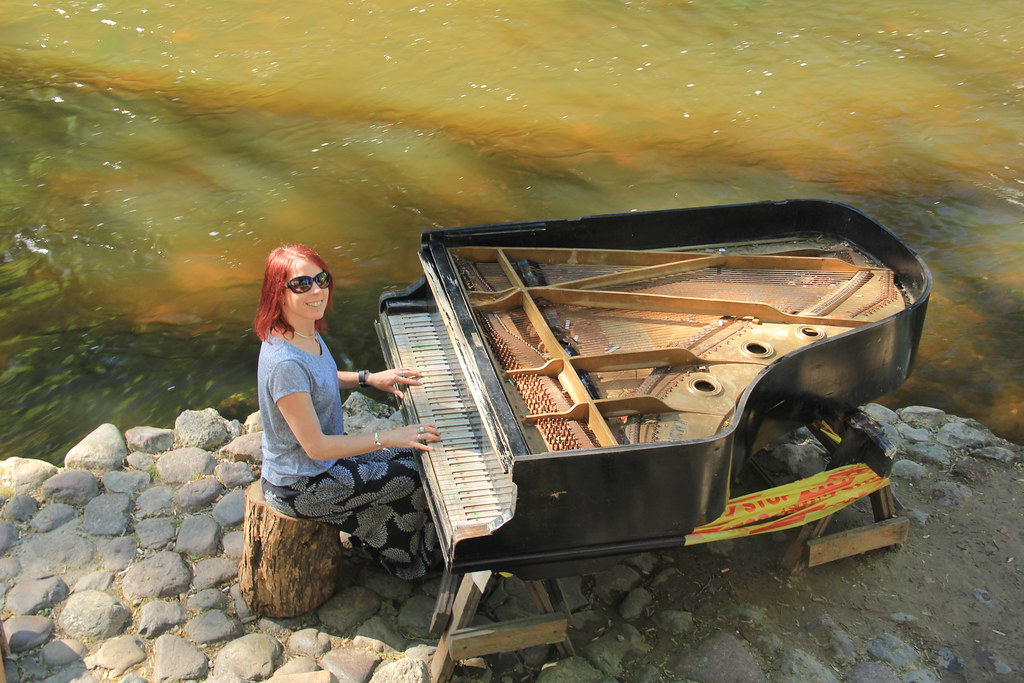 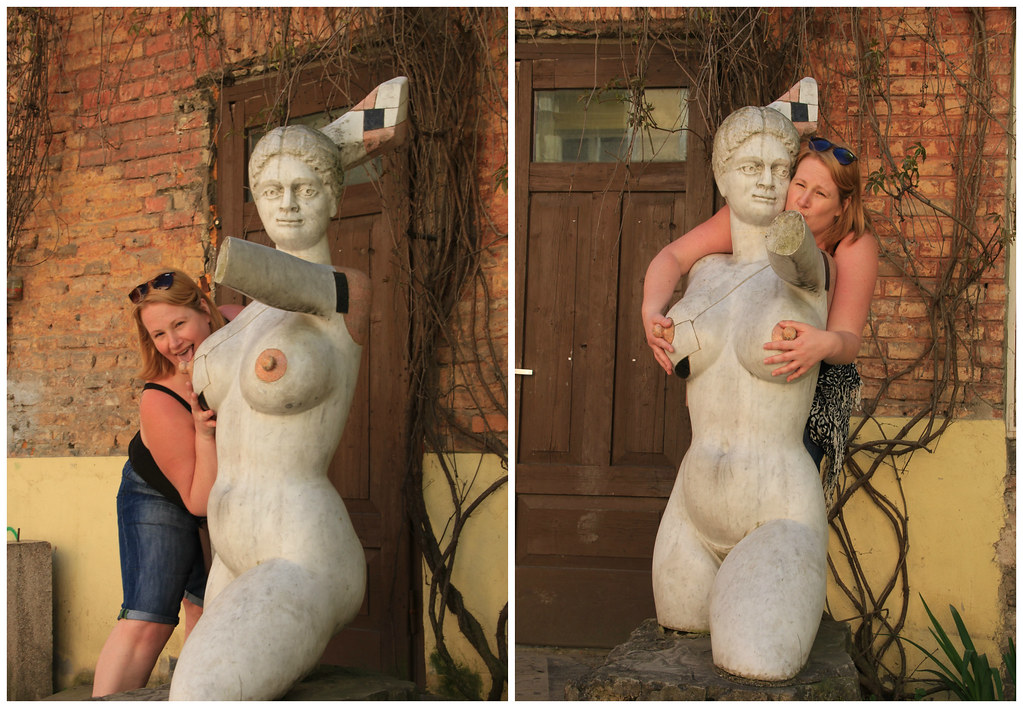 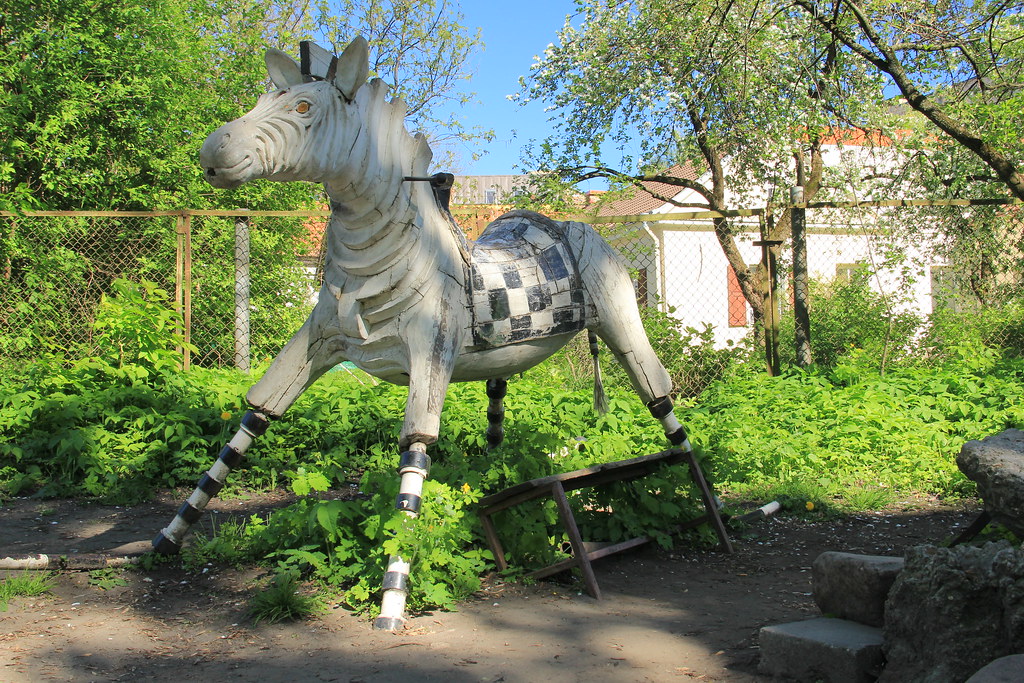 Gaze up at the Užupis Angel

Where Paupio Street meets Užupio Street you’ll find a small square in which the Angel of Užupis stands.  This bronze statue was unveiled on Užupis Day in 2002 and has now become the symbol of the Republic.

There’s quite a few little cafes and wine bars with outdoor seating that overlook the square, so if it’s a beautiful sunny day when you visit, grab a seat, soak up some rays, and gaze up at the trumpeting angel above you.

The Republic of Užupis Today

There are approximately 7000 residents in Užupis today, and around 1000 of these are artists.

The annual revenue from the creative industries in Užupis amounts to six million euros. Fifty different businesses operate here and over 300 creative professionals work here in an area of roughly 10,000 square metres of creative space.

Its cultural, economic and social impact has reached far beyond Vilnius, and even Lithuania.

Whether Užupis’ move to become an independent Republic was an elaborate piece of performance art or a genuine political statement, there’s no doubt that it has definitely been a successful one.

Accommodation in the Republic of Užupis

Although we didn’t stay in Užupis (primarily because we knew very little about the neighbourhood before visiting Vilnius, so we chose to stay more central to the Old Town in general), I have since researched accommodation here in case I ever decide to return.  Or if the Lithuanian Tourist Board ever invite me (hey, I can dream!).

Budget: Downtown Forest Hostel and Camping.  Although its names suggests it’s located in the midst of the Lithuanian countryside, this place is actually right in the centre of Užupis, on Paupio Street (the same street as the constitution), at the foot of a hill close to St. Anne’s Church. Surrounded by trees and with a large garden, shared terrace and camping area, Downtown Forest Hostel & Camping offers dorm room and private rooms and breakfast is available upon request.  When I checked the price of a three-night stay over a weekend in September, it was less than £90 for two people.

Budget: Krivules Apartment.  If you’d rather have your own living space then this apartment looks really smart and well-maintained inside.  Considering there’s one double bed and one sofa-bed (and therefore sleeps up to four people), Krivules Apartment represents amazing value for money.  It’s located on the road adjacent to Paupio Street.

Mid-range: Last but not least, this Airbnb apartment is AMAZING! Just take a look at the photos.  It’s got two bedrooms and sleeps four so the £62 per night (plus service charge and cleaning fees) price tag doesn’t actually sound too bad when you put it into perspective.  If you haven’t yet joined Airbnb, get £25 in travel credit by signing up here.

Restaurants and cafés in the Republic of Užupis

Sweet Root. Widely recognised as one of the best restaurants in Vilnius, Sweet Root serves up creatively prepared, seasonally-inspired food.  I desperately wanted to eat here but could in no way justify spending €65 on one meal (although this does include a welcome drink, a coffee, and several little tasters). €65 is the set price for a seven-course tasting menu. Have a look at the reviews on Trip Advisor here.

Prie Angelo.  Right on the corner by the Angel of Užupis, Prie Angelo looks cozy and inviting and was always busy whenever we wandered past.

And here are some pretty images for your Pinterest boards 😉 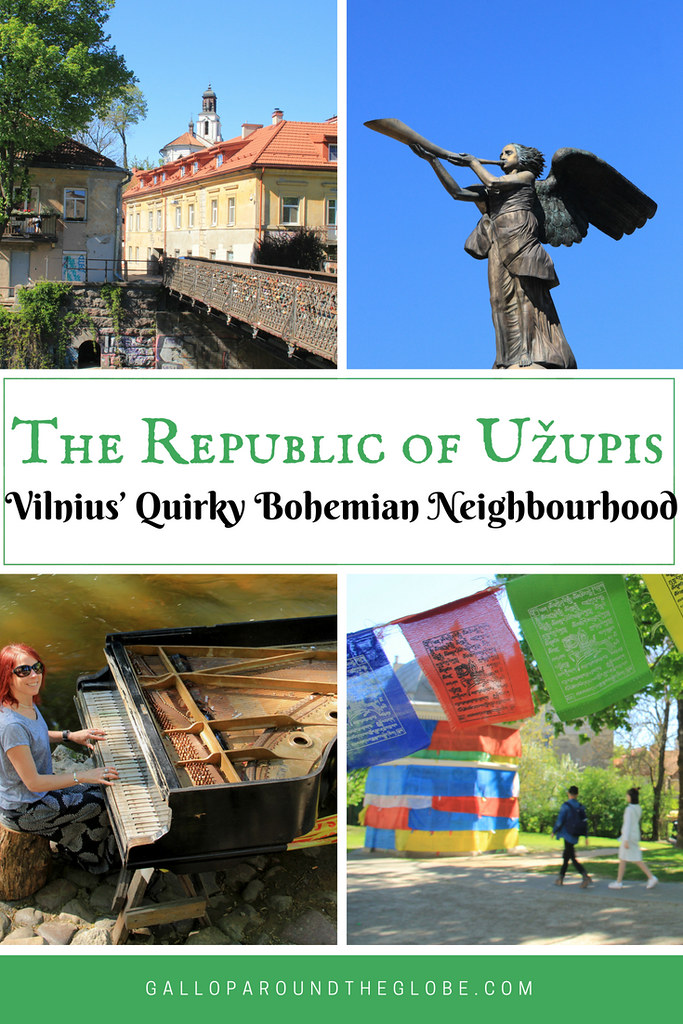 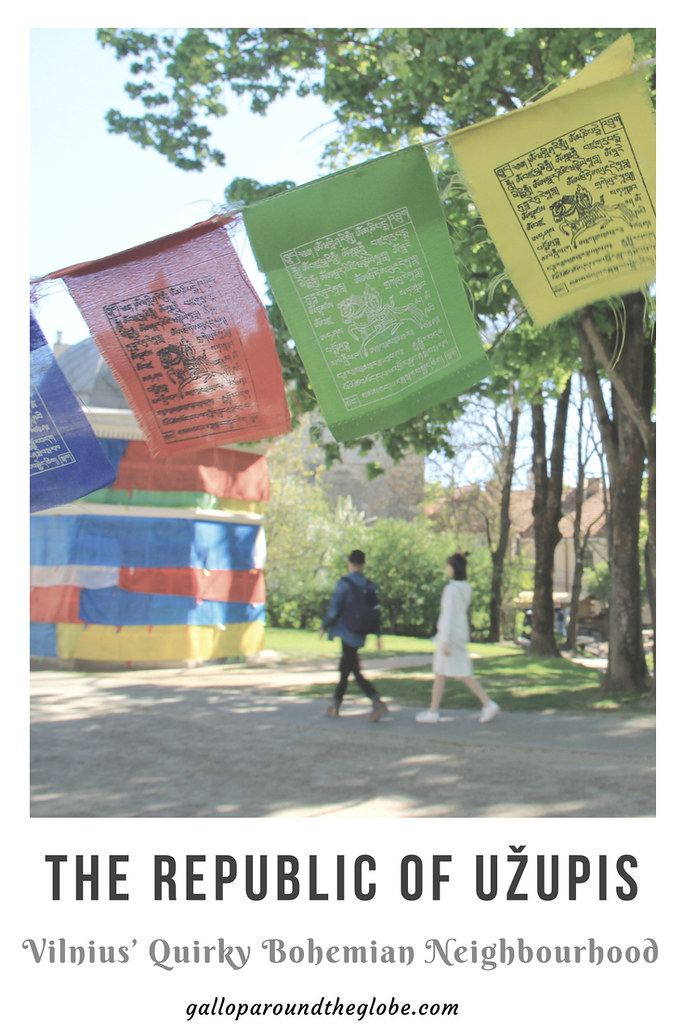 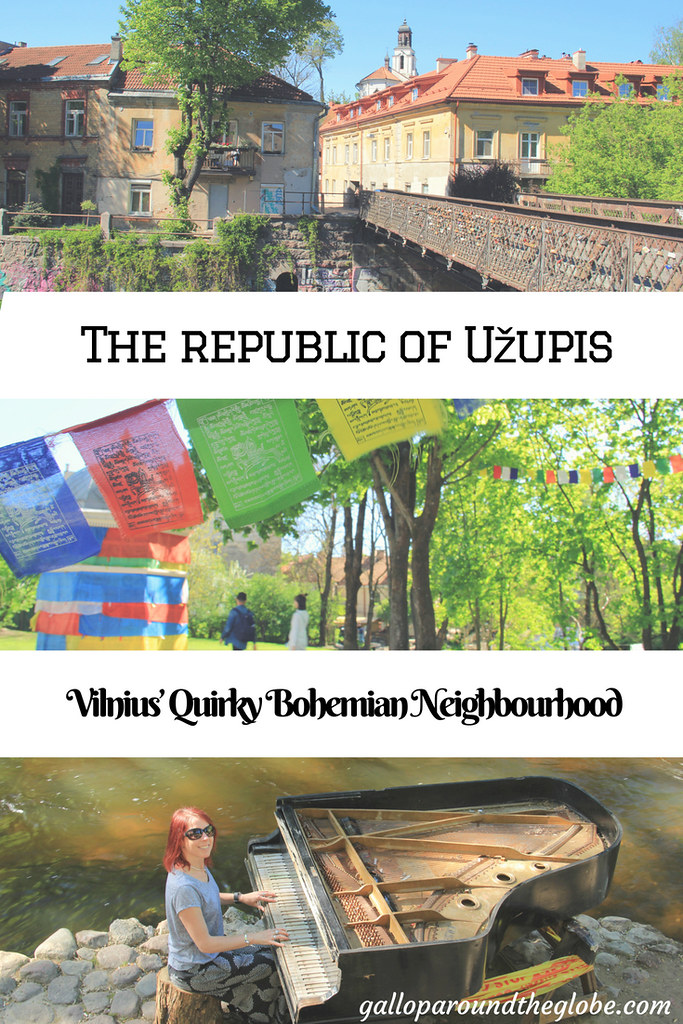 How to Spend a Perfect Weekend in Vilnius, Lithuania: A 2-day Itinerary

After our cow incident back in Shropshire (we got

This was our starting point on the Hadrian's Wall

Last weekend @turners_travels1 and I decided to do

Well, the weather has put a dampener (excuse the p