If you’re looking for one of the easiest day trips from Helsinki that’s also one of the most spectacular, read on!

When I booked my flights out to Helsinki, one of the places I was most excited about visiting wasn’t actually in the city itself; it was 20 minutes away.  By boat.

Built during the Swedish era (1748-1808) as a maritime fortress and a base for the archipelago fleet, Suomenlinna (formerly known as ‘Sveaborg,’ or Viapori’ in Finnish) is Helsinki’s 18th century sea fortress.

Not only is Suomenlinna unusual in the shape of its construction but also in the fact that it has defended three different sovereign states since its initial construction.  During the Russo-Swedish war in 1808, the fortress fell to the Russians and remained under the rule of the Russian Imperial Government for 90 years.  Ownership then passed to the Finnish government in 1918 and it was at that point that its name was changed from ‘Viapori’ to ‘Suomenlinna’ – meaning ‘Castle of Finland’ – to reflect the country’s independence.

In the mid-1960s, the defence forces announced that they would be vacating the fortress completely, and renovations subsequently began to transform the fortress into a structure that could be used for both residential and tourism purposes.  In 1991 Suomenlinna was added to UNESCO’s World Heritage List. 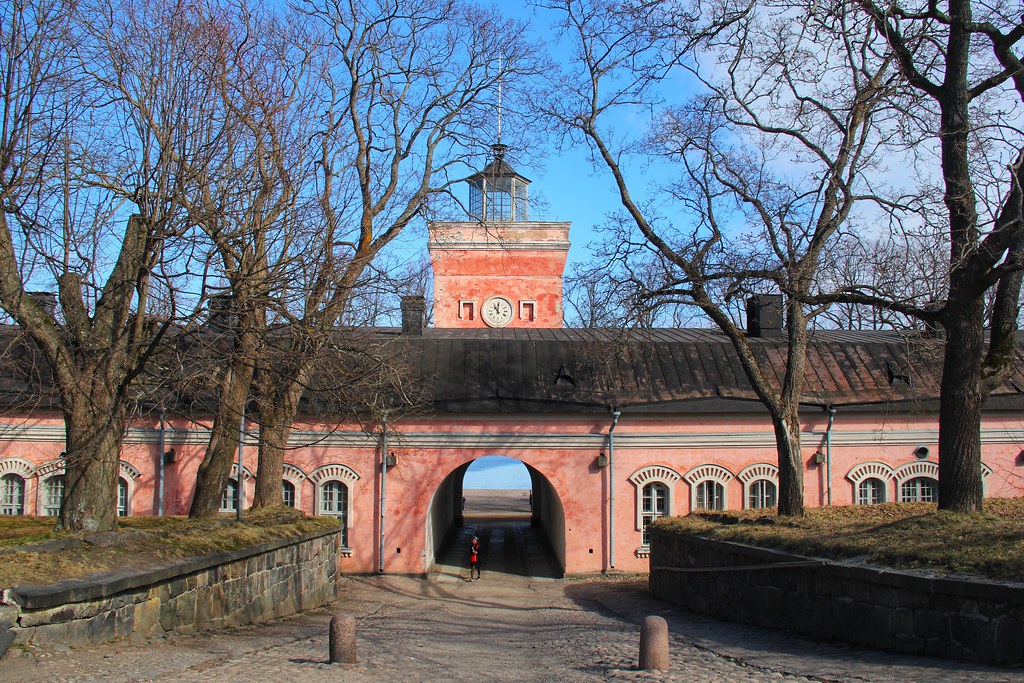 It’s really easy to make Suomenlinna one of your day trips from Helsinki.  Ferries run every 15-30 minutes from Kauppatori (Helsinki’s central market square) and the journey takes approximately 20 minutes.  Tickets are available from the self-service machines located there and a return fare is €5 (correct April 2019).  You can view the current HSL ferry schedule to Suomenlinna here.

Navigating your way around Suomenlinna

The ferry from Helsinki’s market square docks on the north shores of Iso Mustasaari – the largest of the six islands over which Suomenlinna is spread.  The exact location is shown on the map below.   The return ferry back to central Helsinki leaves from the same spot, so you’ll need to follow a circular route around the islands, rather than one that takes you from A to B.

If you’re only planning to spend a morning or an afternoon exploring Suomenlinna then it’s unlikely you’ll make it to any more than two of Suomenlinna’s six islands.  Iso Mustasaari and Susisaari are where the majority of Suomenlinna’s sites of interest can be found anyway, and the best preserved sections of the fortress.

From the main quay, a blue-signposted walking path connects Suomenlinna’s key attractions.  In order to make the most of your time there,  the best thing to do when you arrive is to follow that walking path. Otherwise it’s very easy to get lost or to find yourself wandering around in circles (I speak from personal experience!). 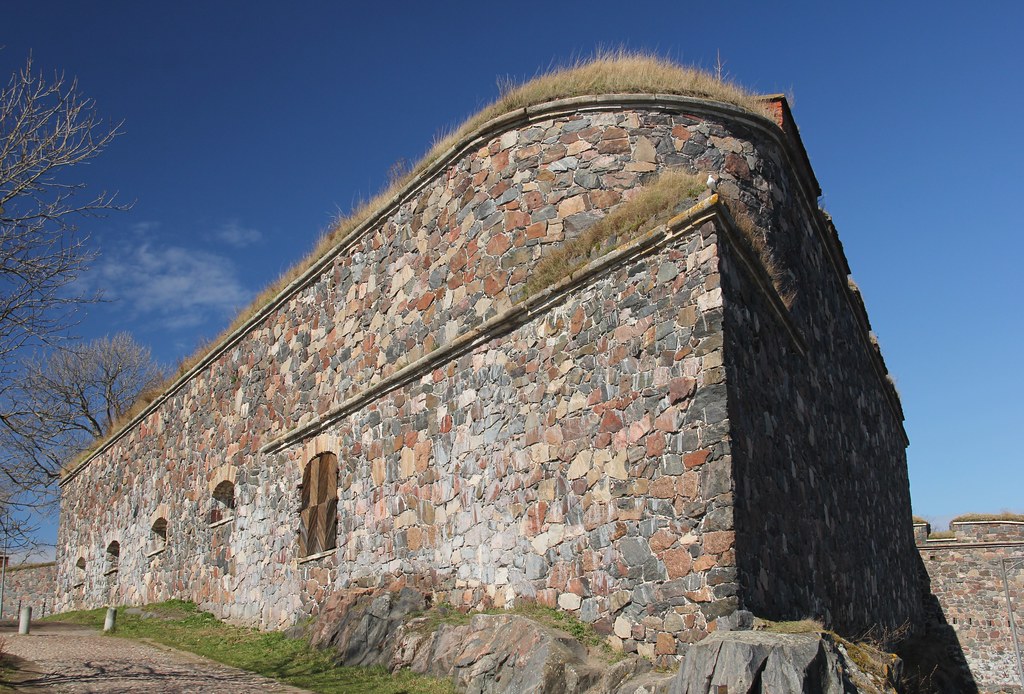 The fortress itself is vast.  There are a total of six kilometres of defensive walls still standing and these walls surround numerous walking trails and parks, several restaurants and cafes, a playground, a theatre, an art gallery, and six museums.

Although central Helsinki does have an abundance of green spaces, if you want to truly get away from it all then Suomenlinna is the place to come. 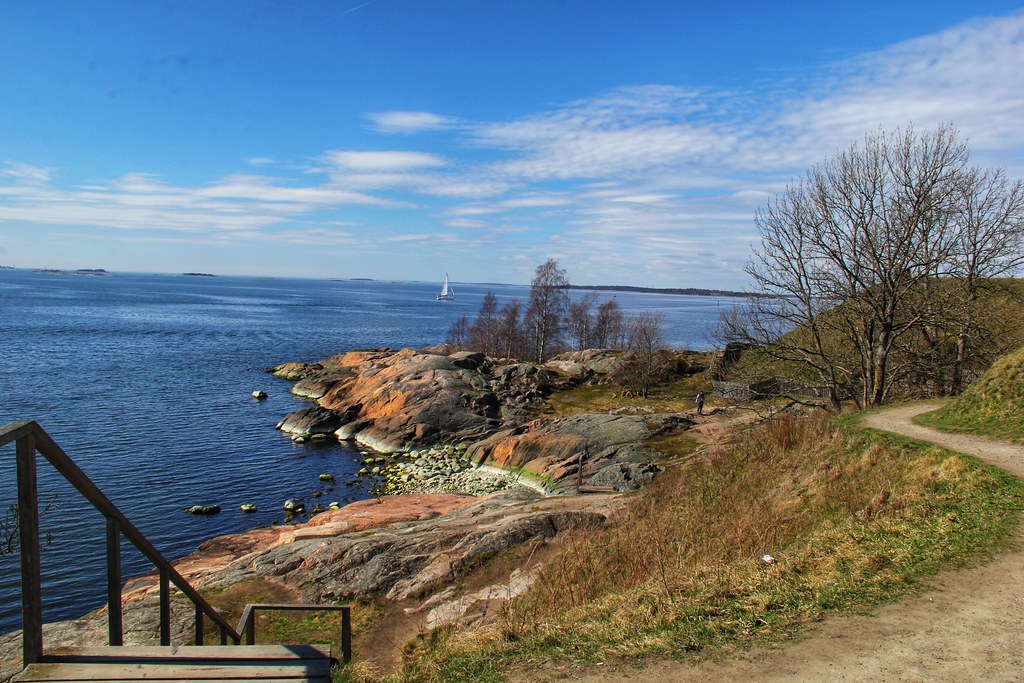 Things to see and do in Suomenlinna

The first point of interest you’ll arrive at is Suomenlinna church.  Built in 1854 as an Eastern Orthodox garrison church for the Russian troops stationed at the Suomenlinna sea fortress, Suomenlinna church has, since 1929, also served as a lighthouse for both air and sea traffic.  It’s one of only three churches in Finland to share this function. 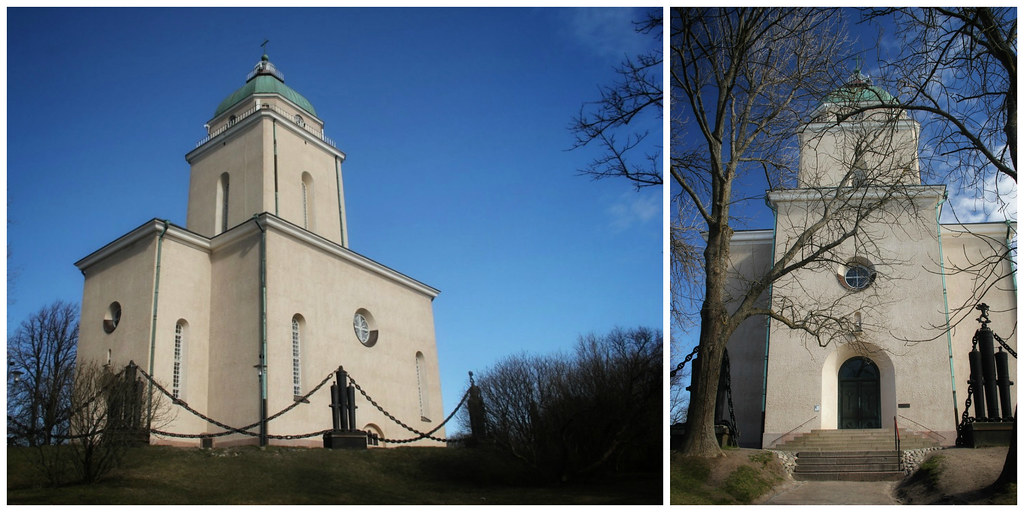 As I mentioned previously, there are also six museums in Suomenlinna:

All of the museums above (with the exception of Suomenlinna Museum) are only open during the summer months between 1 May and 30 September.  Unfortunately, as I was in Helsinki towards the end of April, I was only able to visit the Suomenlinna Museum.  But if you are planning on visiting Suomenlinna in the summer then you can check the opening hours of the other museums in this calendar.  It’s also possible to purchase a Museum Card, which is a combined ticket allowing you entry to all museums in Suomenlinna.

Once you’ve had a look around the Suomenlinna Museum, if you continue along the blue-signposted walking path you’ll come to the bridge that joins the two main islands, Iso Mustasaari and Susisaari. 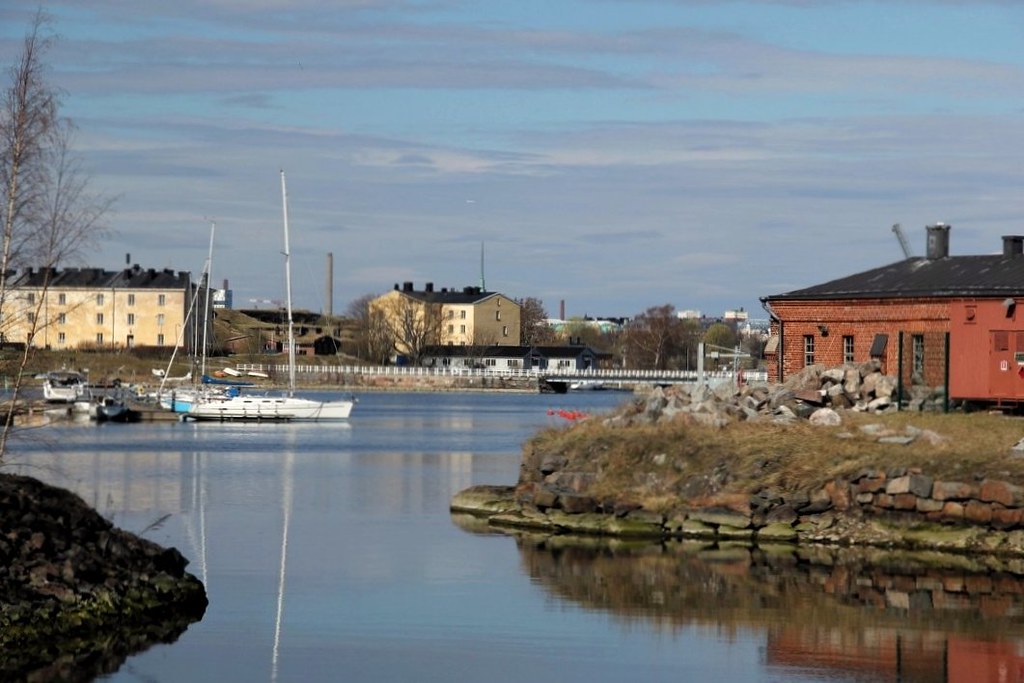 After crossing the bridge, you’ll enter Piper’s Park.  This was probably my favourite section of the fortress, because you can actually climb up on to the grass-covered defensive walls for some fantastic views across Suomenlinna and out to sea. 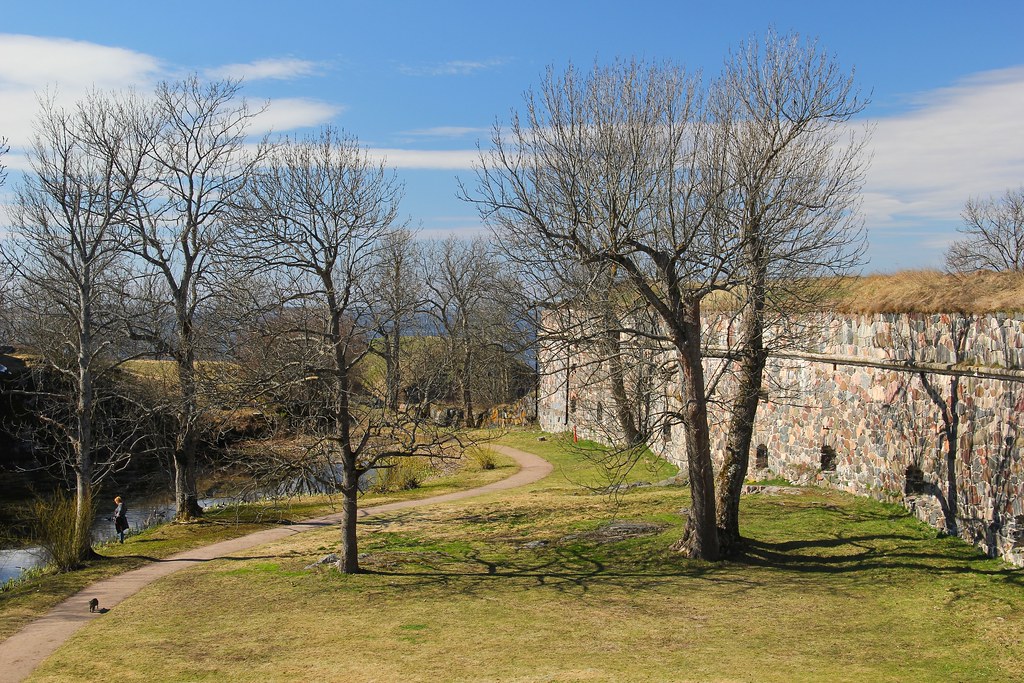 I loved stumbling across colourful little wooden buildings like this one, and imagining what they were once used for. 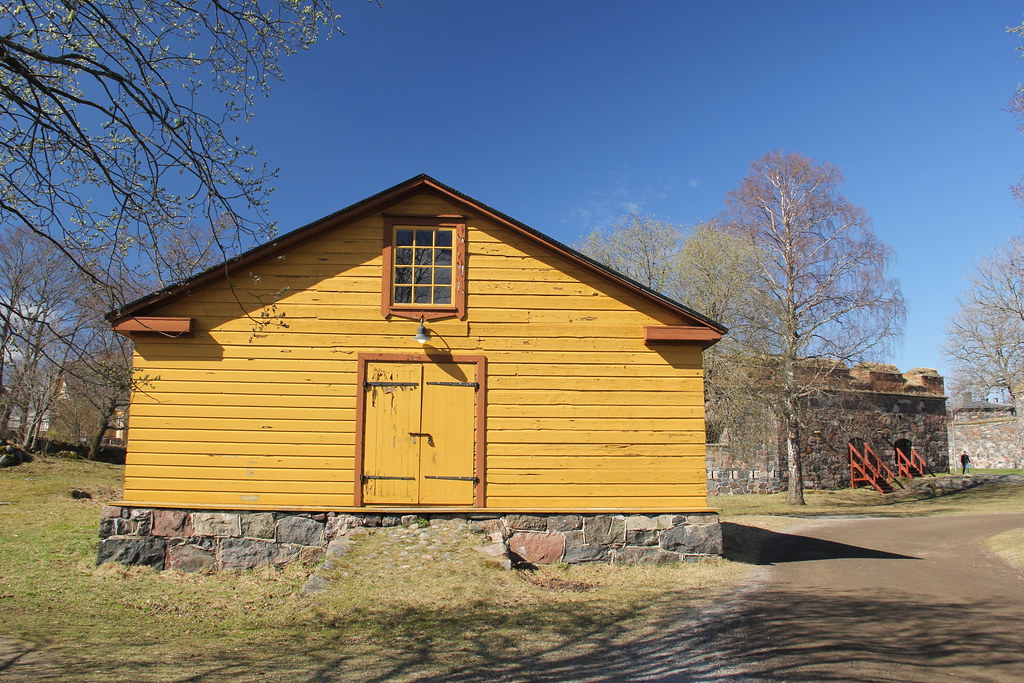 Continue along the path as it winds its way through Pipers Park and you will pass a row of partially hidden stone bunkers before arriving at the most atmospheric part of Suomenlinna – Kustaanmiekka. 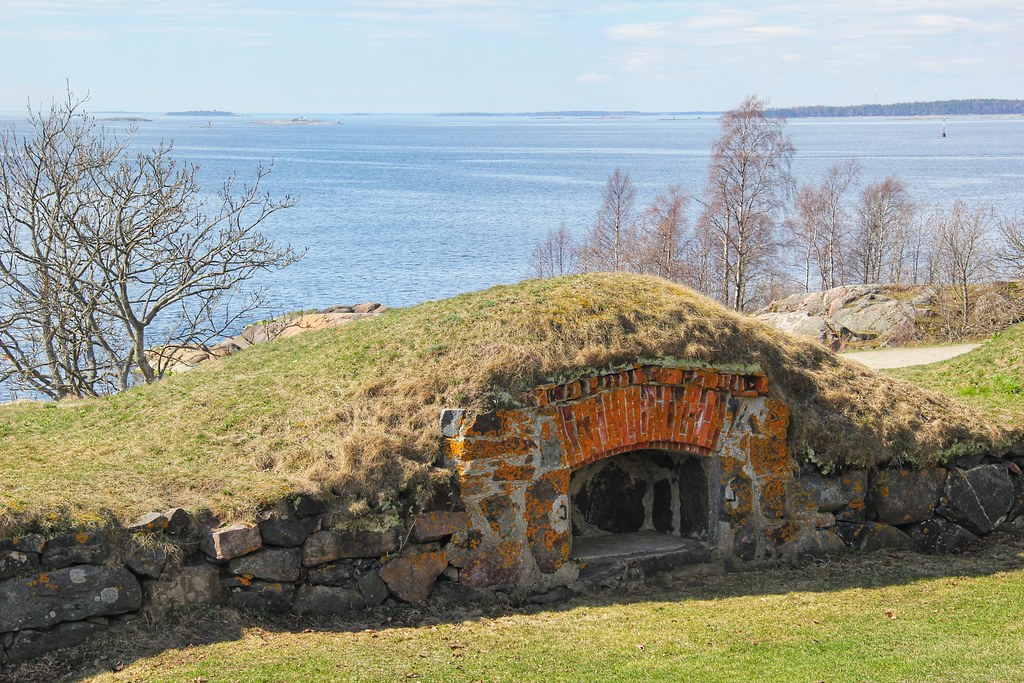 You’ll find cannons at regular intervals along the crumbling fortress walls (there are apparently 100 of them altogether) and there are a few bunkers further along that have been restored and opened to the public. 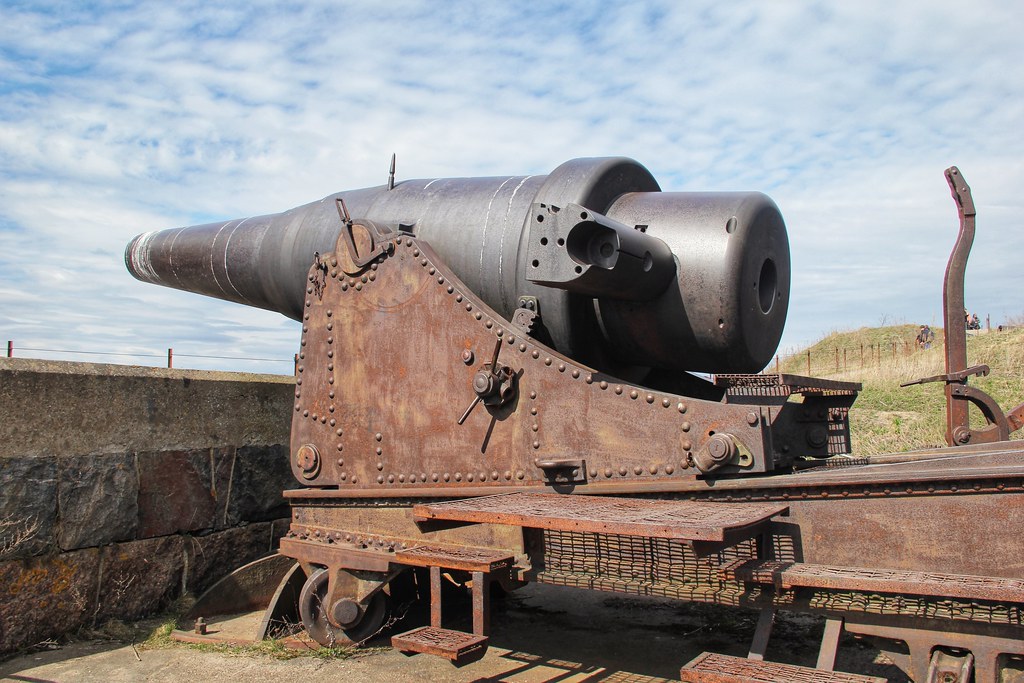 There are also a multitude of tunnels to explore, the longest of which can be found in the southermost end of Kustaanmiekka.  It runs for a couple of hundred metres and parts of it are pitch black, so bring a torch if you plan to walk its entire length.

The last stop on your blue-signposted walking path is the King’s Gate.  According to legend, the gate was built at the spot where King Adolf Fredrik arrived while visiting the fortress for the first time in 1752.  Constructed of marble and limestone from  the Stockholm area in Sweden, it’s one of the most prominent landmarks in Suomenlinna.  It goes without saying then, knowing my propensity for visiting famous sites and somehow managing to miss the primary attraction there, that I peered through the King’s Gate, realised I was at the end of the trail and subsequently chose not to wander through and view it from what I since discovered to be its most impressive angle.

This is what it looks like from the outside:

And that concluded my tour of Suomenlinna!  It had been one of the nicest day trips from Helsinki, and one that I’m so pleased I decided to take.

I had planned to wander around for a little while longer but the skies had begun to look a little like those in the photo above.  So, fearing rain was not far away, and not loving the idea of having to shelter in one of those tunnels for what could potentially be several hours,  I headed back to the port in order to catch the ferry back to central Helsinki.

Although it’s easy enough to explore Suomenlinna independently, following the designated walking trails, hiring a guide can often be beneficial in helping you to form a better picture of the fortress in its heyday.

If you’d rather have a local show you around, it is possible to book a guided walking tour around Suomenlinna during the summer months.  The tours last approximately one and a half hours and cost €11 per adult.  Further details about Suomenlinna walking tours are available here.

When I first planned my visit to the city, I had no intentions of making any day trips from Helsinki; I assumed that there would be enough to keep me busy in the city itself for the entire duration of my stay.  And whilst there absolutely is, Suomenlinna makes for such a delightful mini escape from city life – even if only for a few hours.

So, if you’re travelling to Finland’s capital city, be sure to make Suomenlinna one of your first day trips from Helsinki.   If you can, plan it for a sunny day, because the neighbourhood is made for long walks and picnics 😊.

If one day is not long enough for you to complete your explorations, the good news is that it’s possible to stay in Suomenlinna.  Hostel Suomenlinna is housed in a former Russian elementary school from the early 1900s and offers either private rooms or dorm-style accommodation.

There’s large, well-equipped kitchen on-site and a supermarket just across the road, but if you’d rather head out for food you’ll find a few cafes and restaurants on the island.  Alternatively, the hostel is just a four-minute walk to the harbour, from where you can catch a ferry over to central Helsinki.

Due to the high prices of accommodation in Helsinki, you might find that – even with the €5 charge for the ferry there and back – it works out cheaper to stay on Suomenlinna and travel to Helsinki every day to continue your exploration.

Read more: What to do in Helsinki in one day

And if you’re worried that you’ll miss out on the nightlife in Helsinki by doing so, have no fear because the last ferry from Helsinki’s central market square to Suomenlinna is at 2:20 a.m!! (even during the winter months).

I used the latest Lonely Planet Helsinki guide to plan my trip.  As I wasn’t exploring Finland beyond Helsinki on this occasion I didn’t bring my full Lonely Planet Finland guide, but it’s worth investing in if you’re planning to visit other parts of the country too. 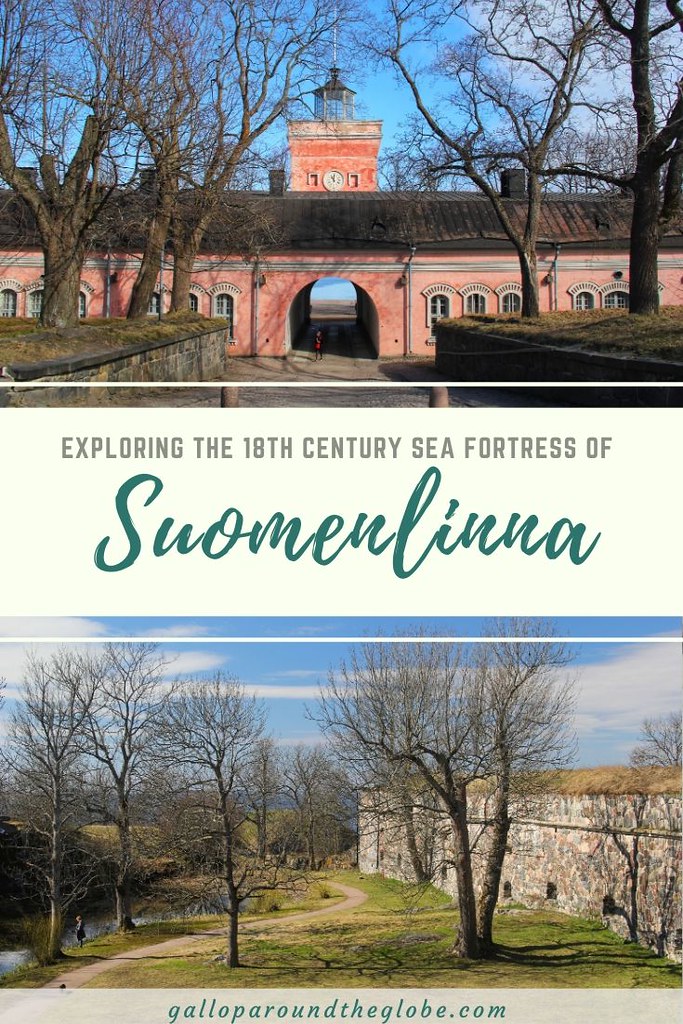 Visiting Kotor: 7 reasons this coastal city in Montenegro totally charmed my socks off

Can’t Get to the Film Festival? Plan Your Own Banff Mountain Adventures!