Finding the Smallest House in Britain and the Longest Place Name in Europe: A Weekend of Superlatives in North Wales

For such a small country, Wales is packed with incredible sights.  But I’m sharing just a few of the best places to visit in North Wales in this post.   Keep your eye out for future posts to discover more!

It’s no secret that I love superlatives.

This year alone I’ve visited the deepest lake in the Balkans, photographed the largest Orthodox church in Albania, walked the length of the longest village in England, explored the largest and most cutting edge art museum in Estonia, and climbed North Africa’s tallest mountain.

So, one Spring weekend (a Spring weekend that actually turned out to be a bit wetter than we’d anticipated!), Stu and I decided to go in search of our very own superlatives – a little closer to home.

We were on a mission to find the smallest house in Britain and the longest place name in Europe.  Oh, and a couple of castles, a colourful Italian-style village, and a pub that’s been voted ‘the third best beach bar in the world.’

Yep, there are some pretty cool places to visit in North Wales!

You can see a map of the places we made it to below.

A few of the best places to visit in North Wales

In case you were worried (and thank you for your concern), I didn’t just fall asleep on the keyboard.

Llanfair­pwllgwyngyll­gogery­chwyrn­drobwll­llan­tysilio­gogo­goch (yes, I had to copy and paste from Wikipedia to ensure that I’d spelt it correctly!) is actually a large village on the island of Anglesey in North Wales. 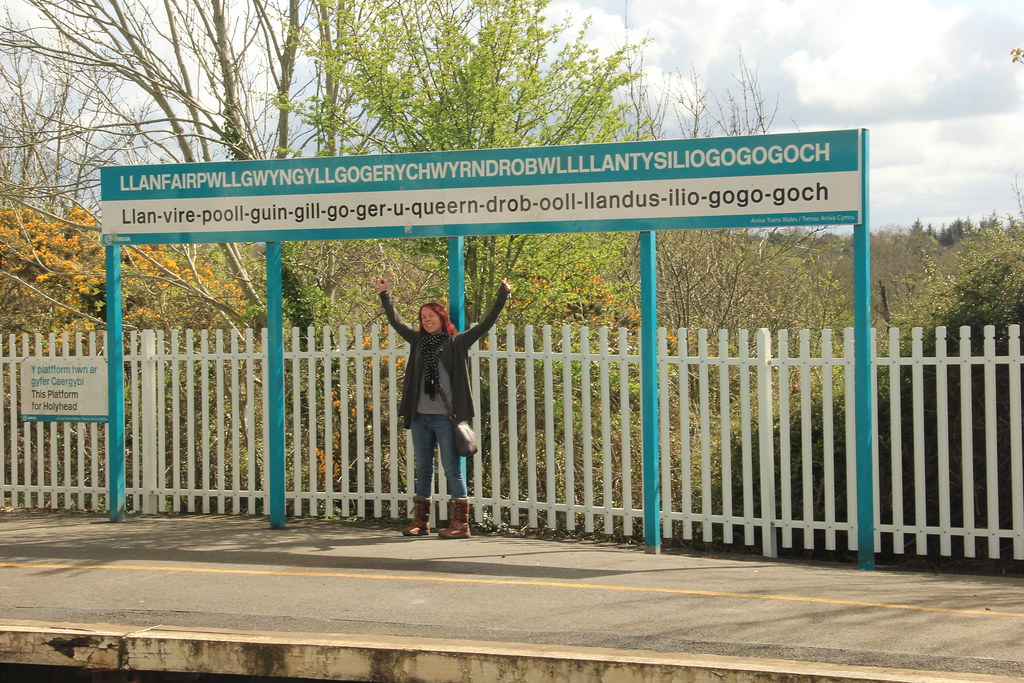 The name (which means “St. Mary’s church in Hollow of the White Hazel near to the rapid whirlpool of Llantysilio of the red cave”) was invented for promotional purposes in the 1860s.

Well, I think it’s safe to say the promotion was successful! I certainly wouldn’t have visited otherwise!

Conwy is a walled market town on Wales’ north coast that is best known for its imposing 13th century castle and for being home to the smallest house in Great Britain.

I remember my parents taking me to see Great Britain’s smallest house when I was a child, but I’d forgotten just how tiny it actually is.

It has a total floor area of 3.05 by 1.8 metres and was inhabited from the 16th to the 19th century, at one point by a family of six people!  Its last resident was a 6’3 inch tall (1.91 metres) fisherman named Robert Jones, who was forced to move out in 1900 when the council declared the house unfit for habitation. 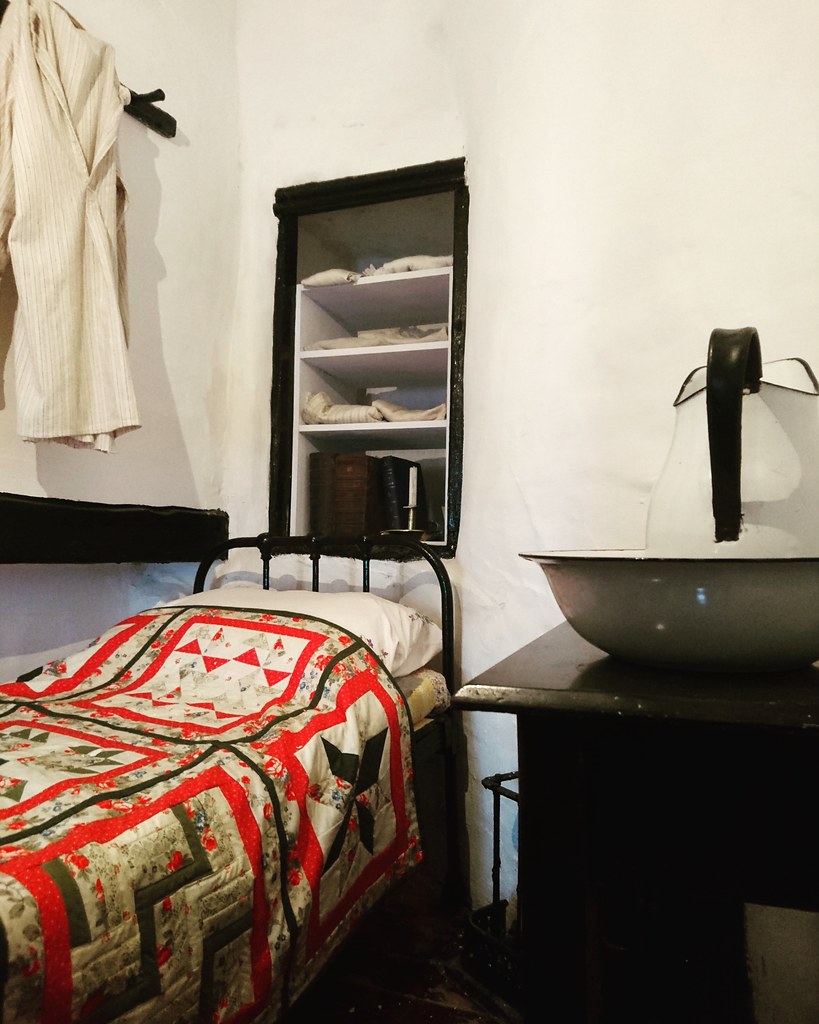 Although most people (including me, admittedly!) will come to Conwy to marvel at just how tiny the smallest house in Britain really is, don’t leave without visiting its imposing 13th century castle.

Built by Edward I during his conquest of Wales between 1283 and 1289, Conwy Castle was declared a World Heritage Site by UNESCO in 1986 – along with the castles of Beaumaris, Caernarfon and Harlech, and the fortifications surrounding the towns of Conwy and Caernarfon.

So, if you’re looking for more places to visit in North Wales with great castles, I can totally recommend you look these other three up.  Although we didn’t make it to any of them on this particular weekend, I’ve visited them all at least once on previous trips. 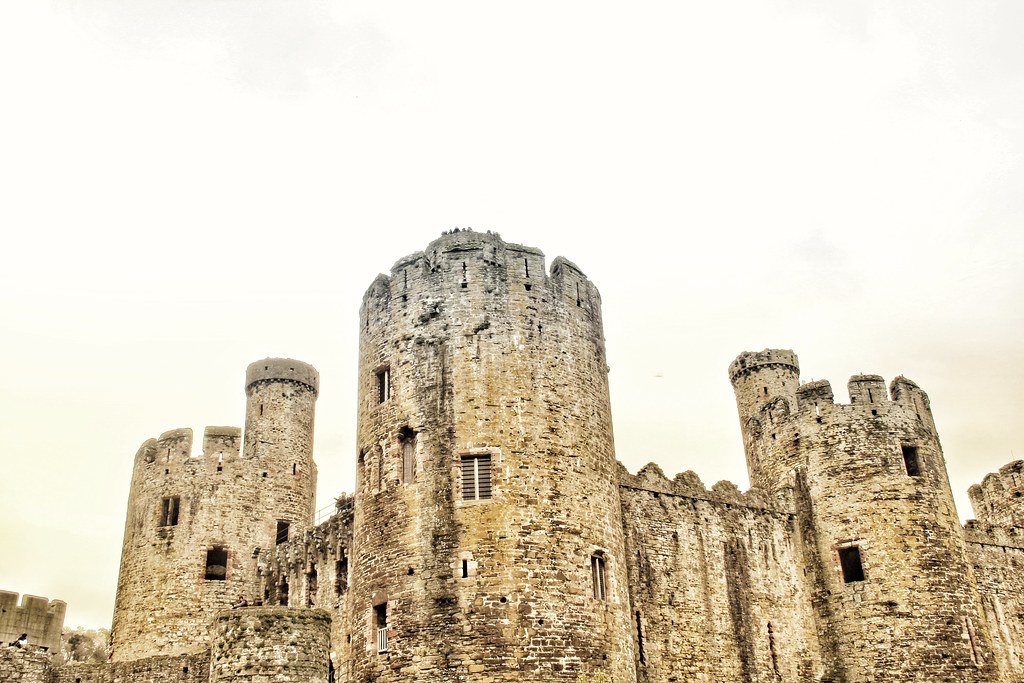 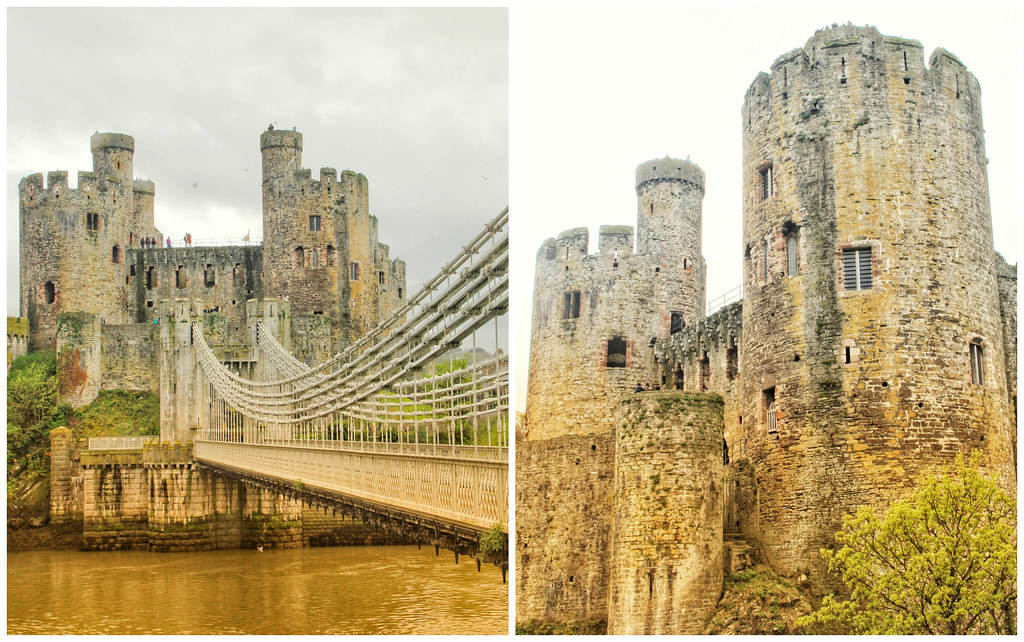 If you’re trying to watch the pennies, you can still get some incredible views of the castle from pretty much anywhere in town.

But a walk along the old town walls will probably afford you the best views of Conwy and its castle. 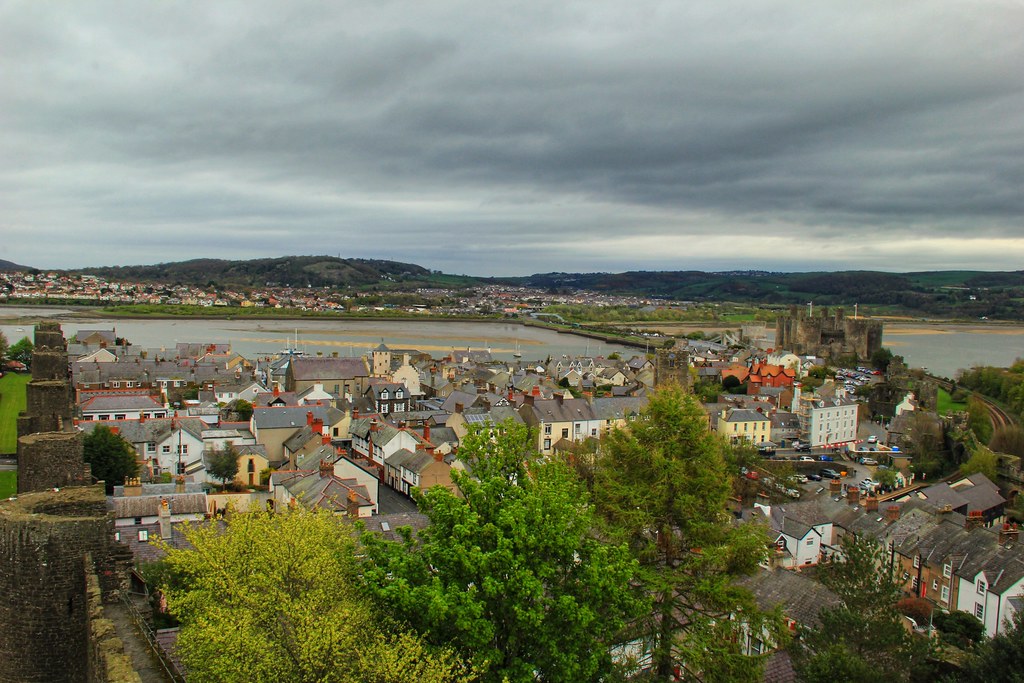 How cute are these little succulents peeking through the cracks in Conwy’s old town walls? 😊 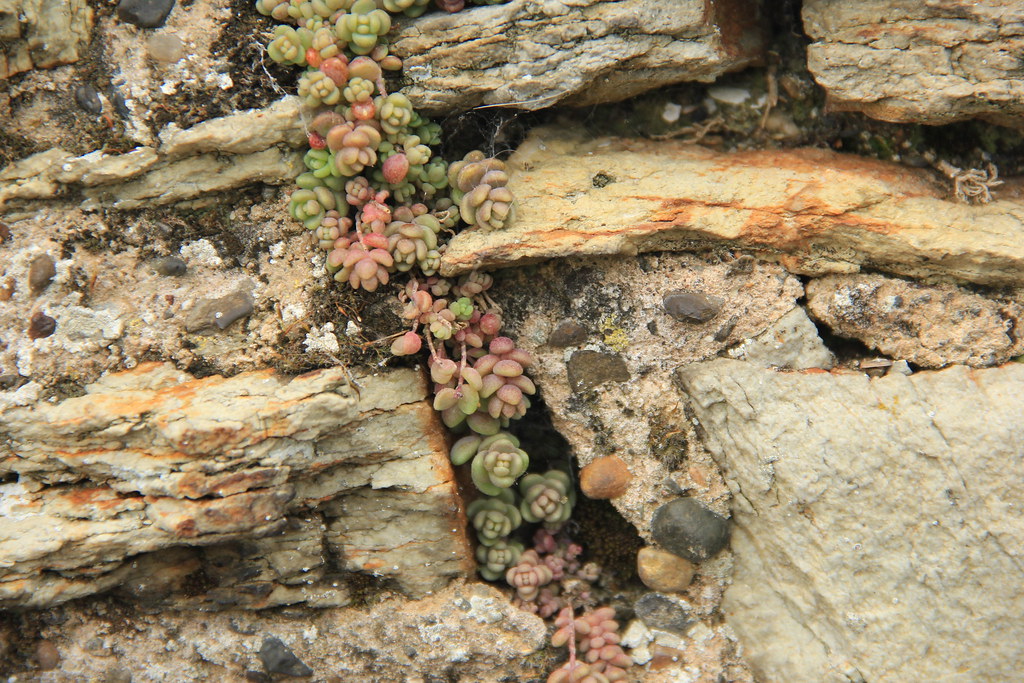 As you can probably tell by my photographs, we weren’t blessed with the greatest weather on our day in Conwy, but down by the town’s harbour, these bright yellow flowers were perfectly positioned to brighten up my shot 💐 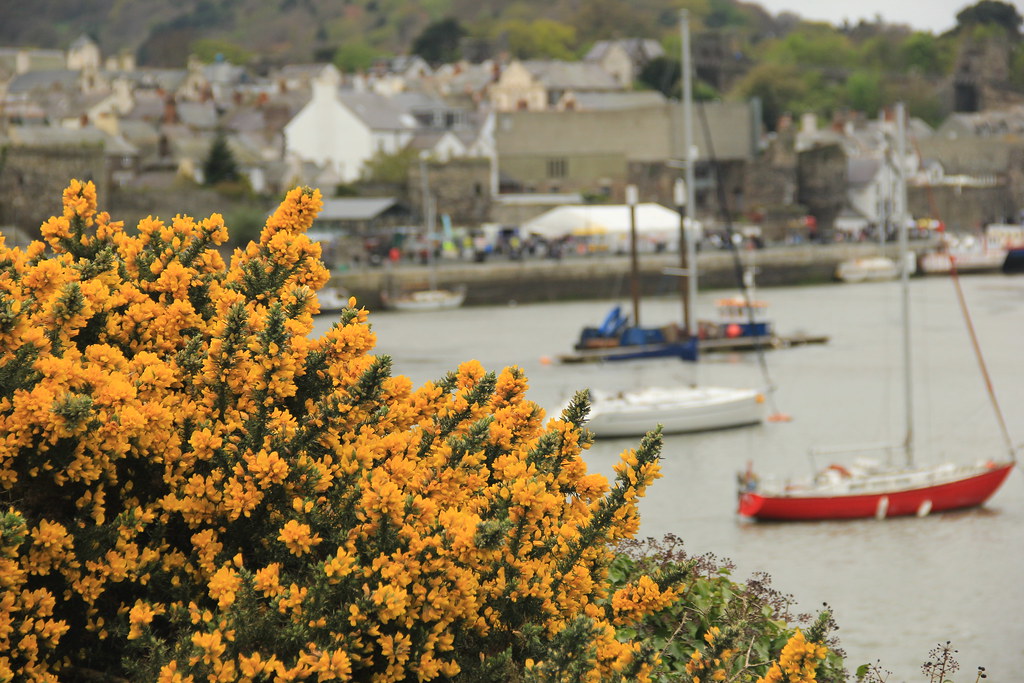 Can you spot Britain’s smallest house in the photo below? 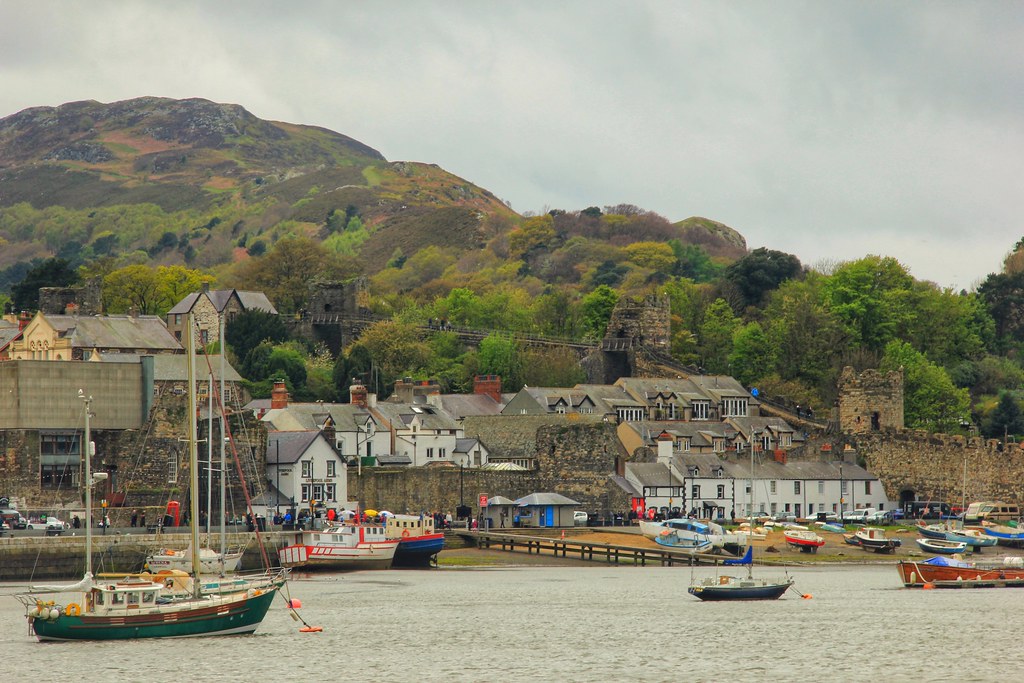 It’s almost impossible to read an article on the best places to visit in North Wales and not see Portmeirion on the list.

Portmeirion was the brainchild of Welsh architect, Clough Williams-Ellis.  A founding member of CPRW (Campaign for the Protection of Rural Wales), Clough Williams-Ellis was as passionate about conservation and the environment as he was about architecture and design.  His goal was to create an ‘ideal village’ – one which played tribute to the atmosphere of the Mediterranean and one where the architecture was sympathetic to the natural landscapes that surrounded it.

He’s done a great job: if it weren’t for the wet weather, I could have easily mistaken this colourful village in rural Wales for one on Italy’s Mediterranean coastline.

Even on a dull, rainy, and cloudy day, Portmeirion does not fail to work its magic 😊 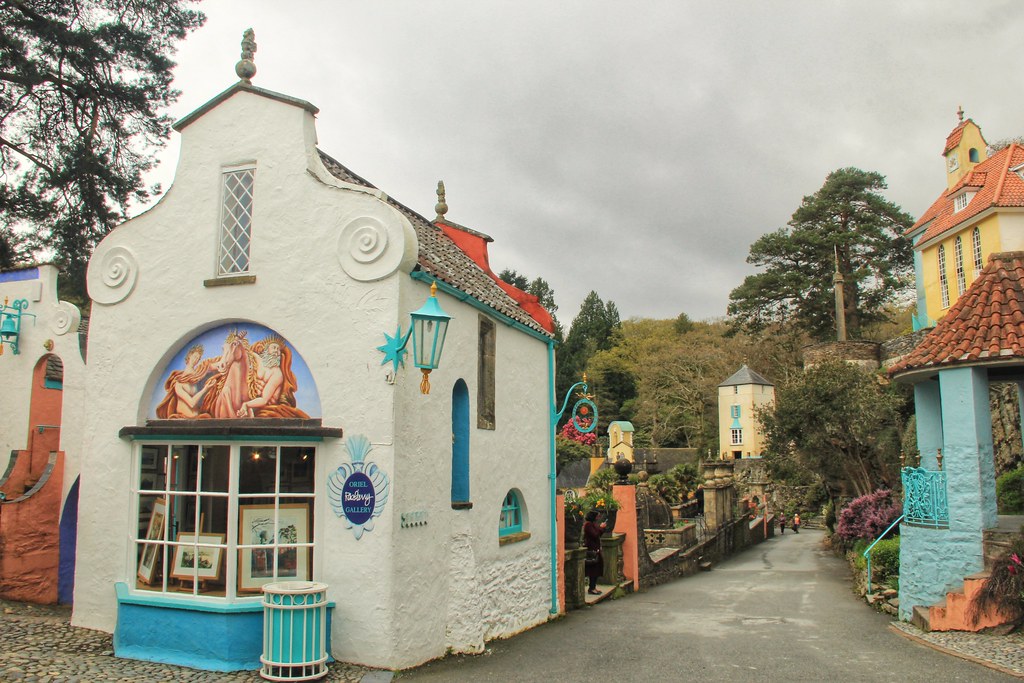 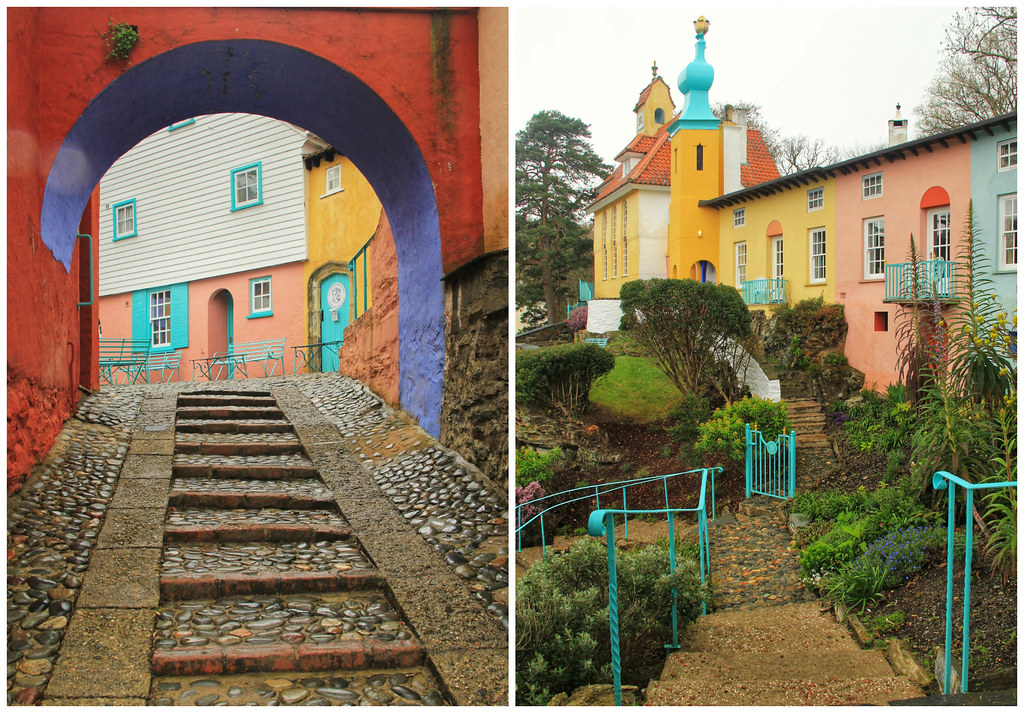 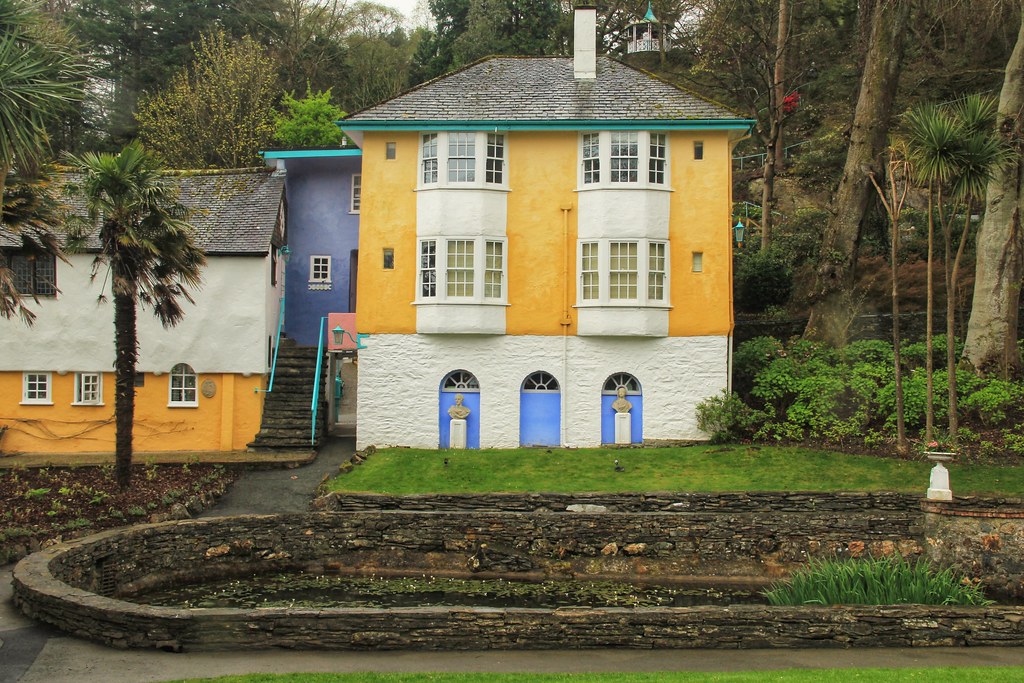 Portmeirion is also famous for being the backdrop to the 1960s cult TV series, The Prisoner.

I’m embarrassed to admit that I’d never actually heard of it prior to having a conversation with my (older) work colleagues about my intentions to visit this colourful Welsh village.  But apparently it was one of the most influential pieces of television from the 1960s, and each year fans of the series hold The Prisoner Convention here at Portmeirion.  At this convention you can take part in the Election Parade, watch a show at the Tally-Ho Theatre or (weirdly) play a game of Human Chess (?!). 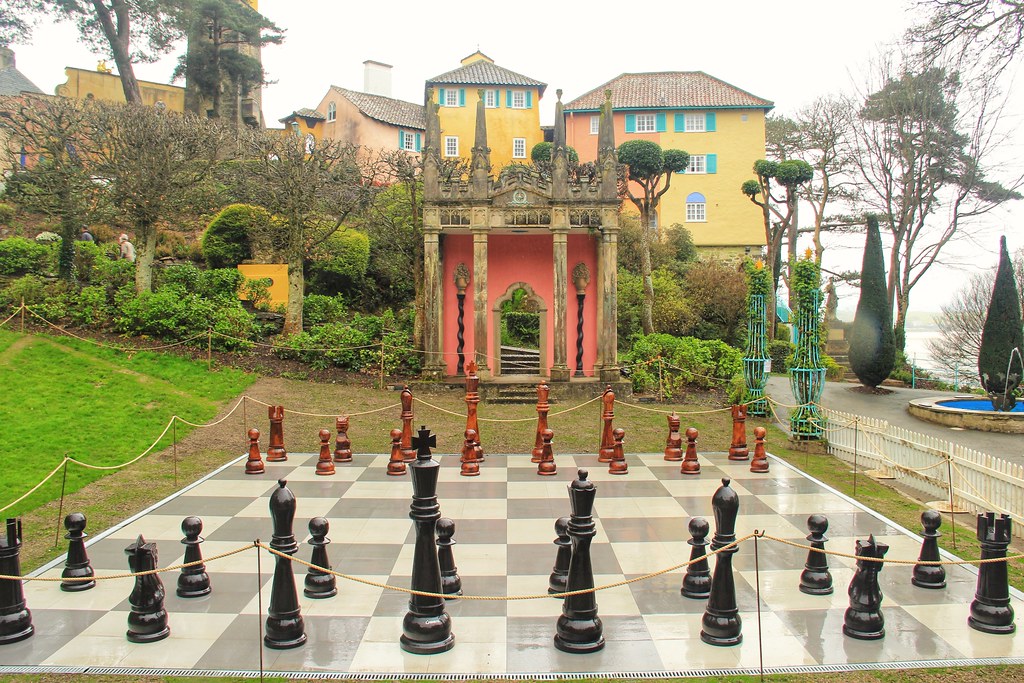 There’s even a Prisoner Shop on site, which sells official clothing and merchandise from the show – a show which is now over 50 years old!!!

Away from the colourful architecture of the main part of the village is a huge area (70 acres) of woodland that you can wander through, complete with a Japanese garden containing an ornate pagoda and lily-covered lake.

If I had to put a top ten together, of the best places to visit in North Places, then Portmeirion would definitely be on the list!

Located on the Llyn peninsula in the Eifionydd area of Gwynedd, Criccieth is another Welsh Town that’s best known for its castle.

Built in 1239 by Prince Llewelyn the Great, Criccieth Castle holds a commanding position on the headland that overlooks the town, and offers views along the white sandy beaches of the nearby Llŷn Peninsula and of the outline of Harlech Castle across Cardigan Bay.  On a clear day you may even be able to see the snow-capped peaks of Snowdonia.

It’s not as well preserved as Conwy’s castle, but the prices reflect this (it’s just £5.30 to enter) and in my opinion, the views alone make a visit here completely worthwhile. 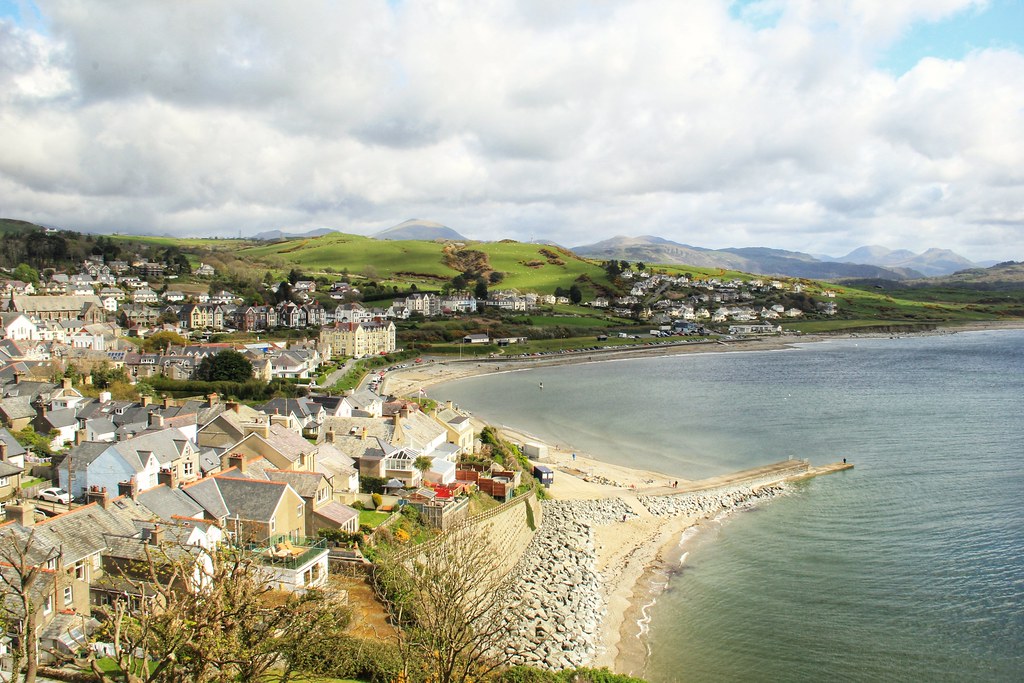 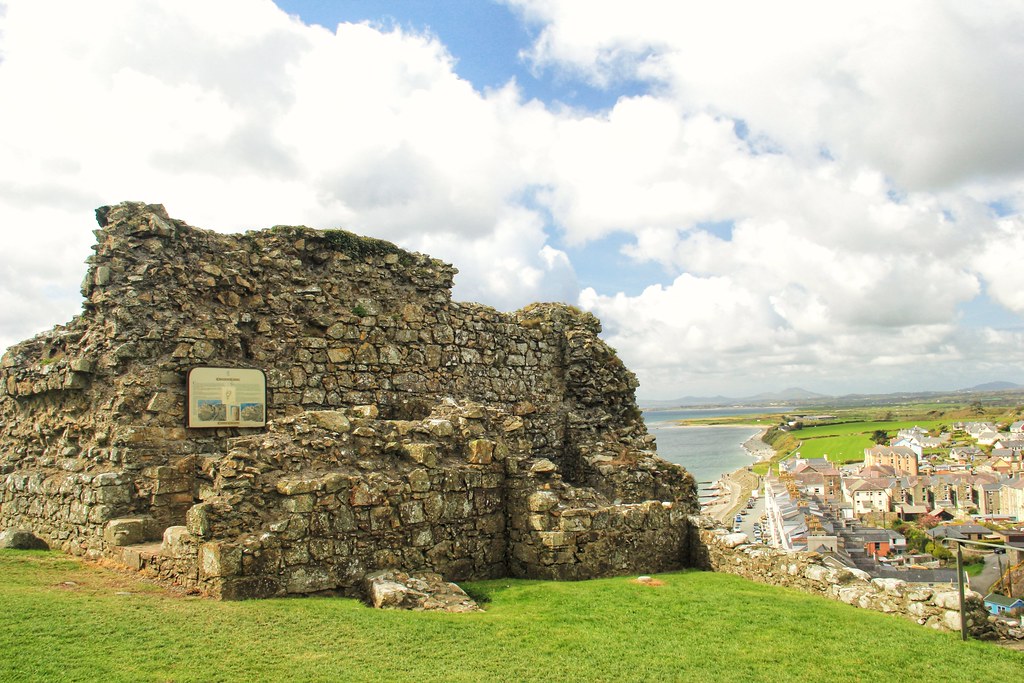 The sole reason we ended up visiting this village was because I’d read this article about the Ty Coch Inn being named the third best beach bar in the world.  Not just in Wales, in the U.K or in Europe but in the world.  This, I had to see.

The Ty Coch in is located in the beautiful fishing village of Porthdinllaen, near Morfa Nefyn on the Llŷn Peninsula.  It started life as a vicarage in 1823 before being opened as a inn in 1842, with the intention of providing food and drink to shipbuilders from the nearby harbour. 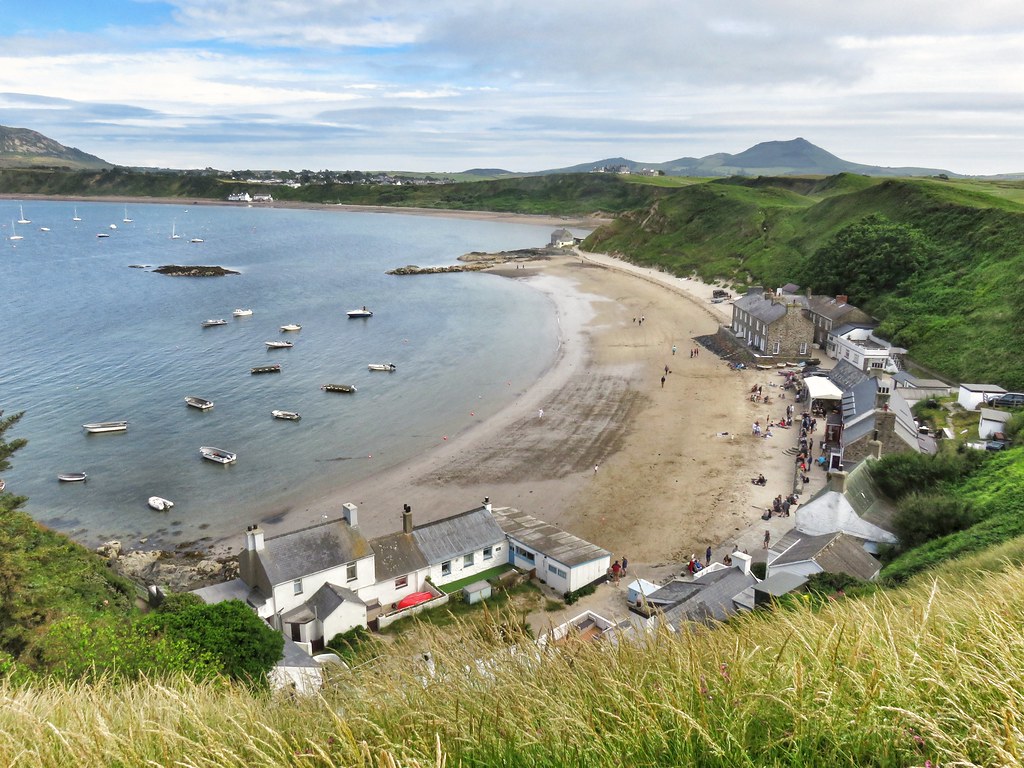 And in all honesty, the location is stunning, and remote – a remoteness which stems from the fact that the pub is only accessible on foot or by boat.  From the pub you have views across the Irish Sea to Yr Eifl (The Rivals) – a mountain range on the north coast of the Llŷn Peninsula.

You can actually follow the Llŷn coastal Path all around the edge of the peninsula, but we just took the circular route which took us past the RNLI Porthdinllaen Lifeboat Station and back up towards the car park.  Incidentally it costs £5 to park your car here (although as far as I’m aware you can stay all day for this price, if you want to).

Places to visit in North Wales | Where to stay

We pitched up at two separate camp sites in order to make the trip as cheap as possible.

However, had my bank account have been looking a bit healthier at the time then I would’ve booked a slightly more comfortable option – especially given the weather.  Booking.com is my go-to accommodation booking site.  You can browse hotels in Conwy or hotels in Criccieth by clicking on the appropriate links.

Alternatively, if you fancy pushing the boat out a little, you can stay in Portmeirion’s only hotel – a little piece of Victorian decadence overlooking the sandy beaches of the Dwyryd Estuary.  Clough Williams-Ellis opened the hotel in 1926 (a whopping 93 years ago!) and yet it still continues to be one of North Wales’ best-rated.

Of course, there are many more places to visit in North Wales than I’ve mentioned in this post, so you can browse hotels everywhere else by using the search box below. 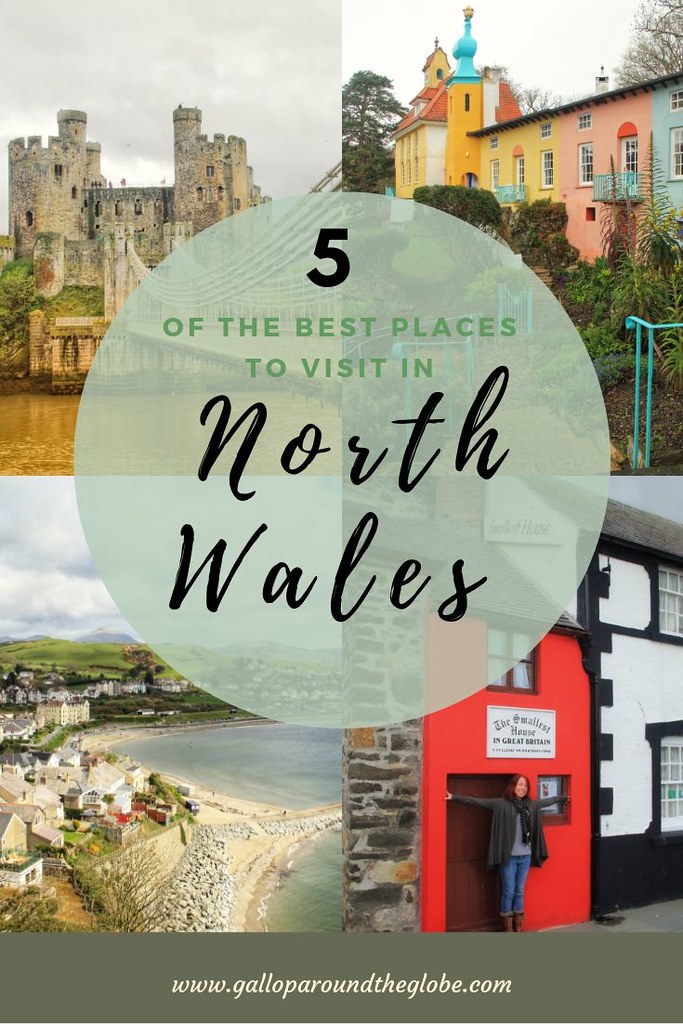 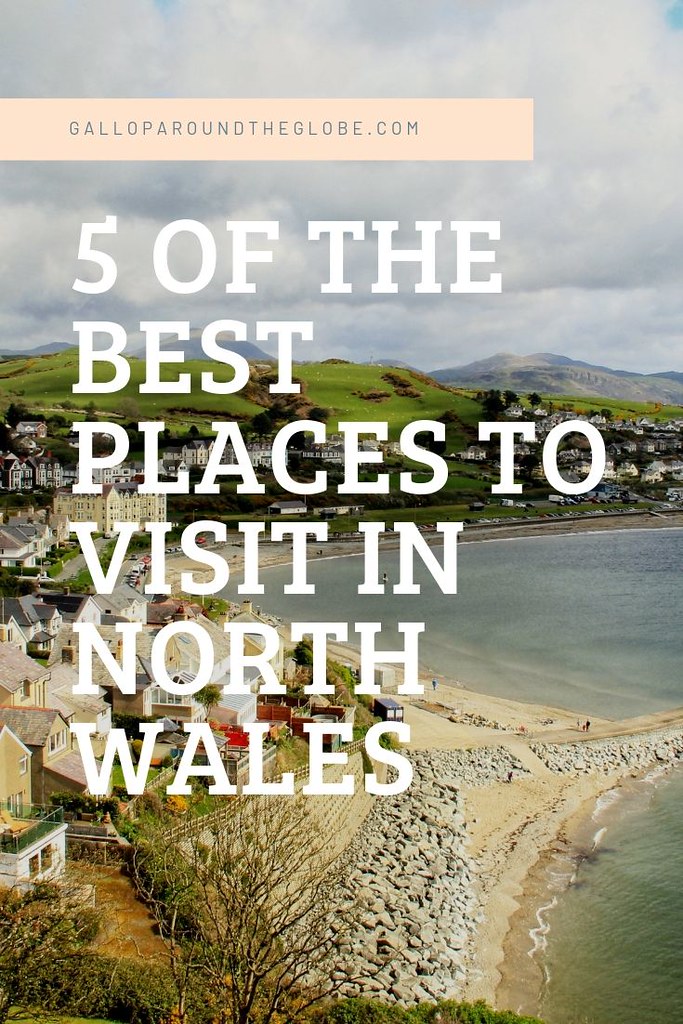 One Day in Bath, UK: An Itinerary of Things to See, Do and Eat

Montenegro for Outdoor Enthusiasts – Gallop Around The Globe

Travelling with Carry-on Only: How to Pack for 10 Days Using Only a Carry-on Under Seat Bag

Visiting One of the Largest Castles in the Balkans in Gjirokaster, Albania

It's Friday and I've just realised I've not shared

This little gem of a building is actually around t